Sometimes, a year doesn’t start on January 1st. In fact, it can start on any day of the calendar year. In ancient Rome, the new year initially began on March 15, the so-called Ides of March (Idus Martiae) and were made infamous by the murder of Julius Caesar. 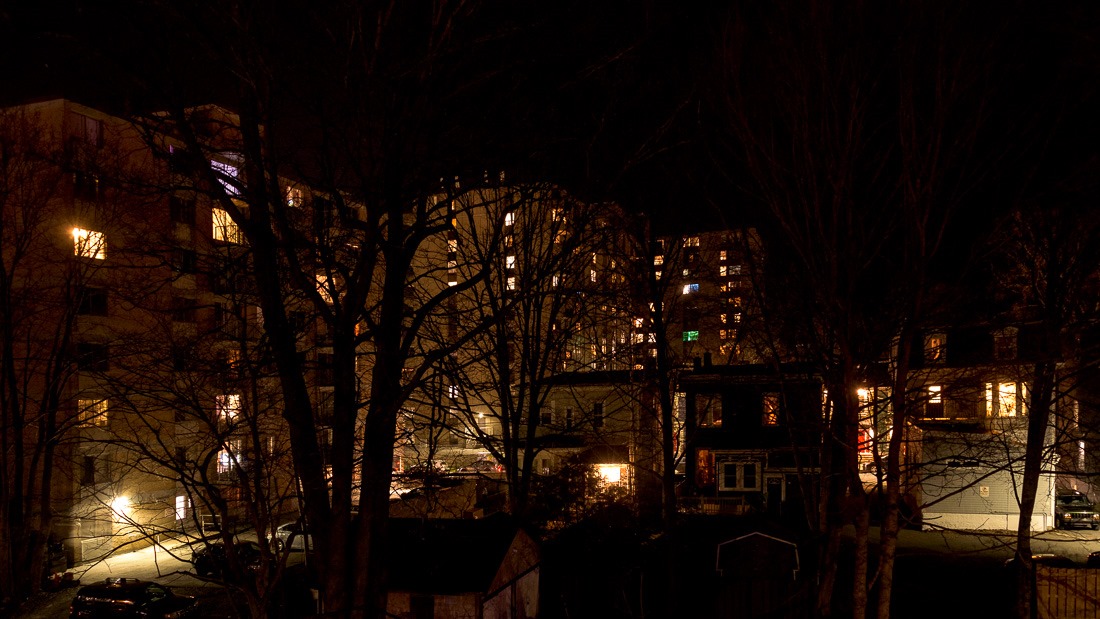 For me, this last year also began in March. It began with packing stuff, boxing and rolling up the carpets.

Then, a long but uneventful trip towards the east. It was to be the trip that separated us from Manitoba and would start a new life, here in Nova Scotia. Driving through a Canadian landscape is always a pleasure. Yet somehow, that pleasure was dampened by the rules and regulations that told us not to linger anywhere. After all, we could have been the carriers of a murderous affliction. 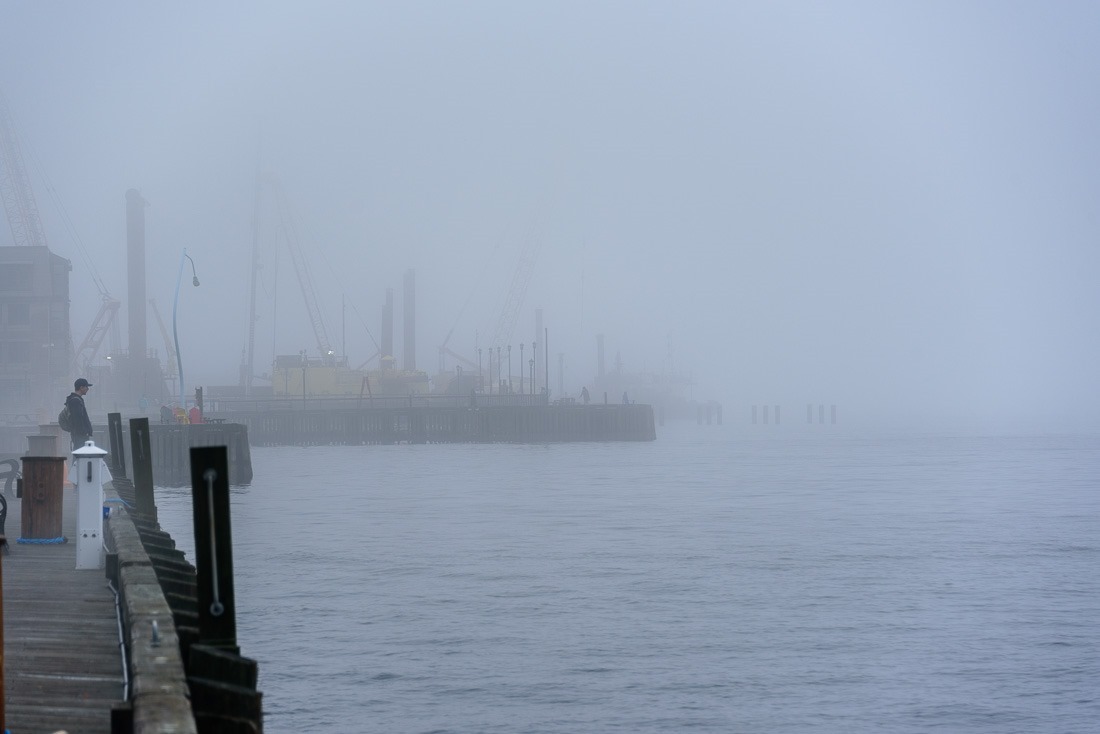 First encounter with the Boardwalk

But we also survived being treated as outcasts and arrived at our temporary destination in Halifax. The lead picture was taken from the balcony of our apartment in the south end of the city. Then came the long wait of self-inflicted isolation. 14 days later we were allowed to go outside again and the first thing to do was check the Halifax Boardwalk. It turned out to be a bit foggy that day, but hey, it was outside and that felt great. 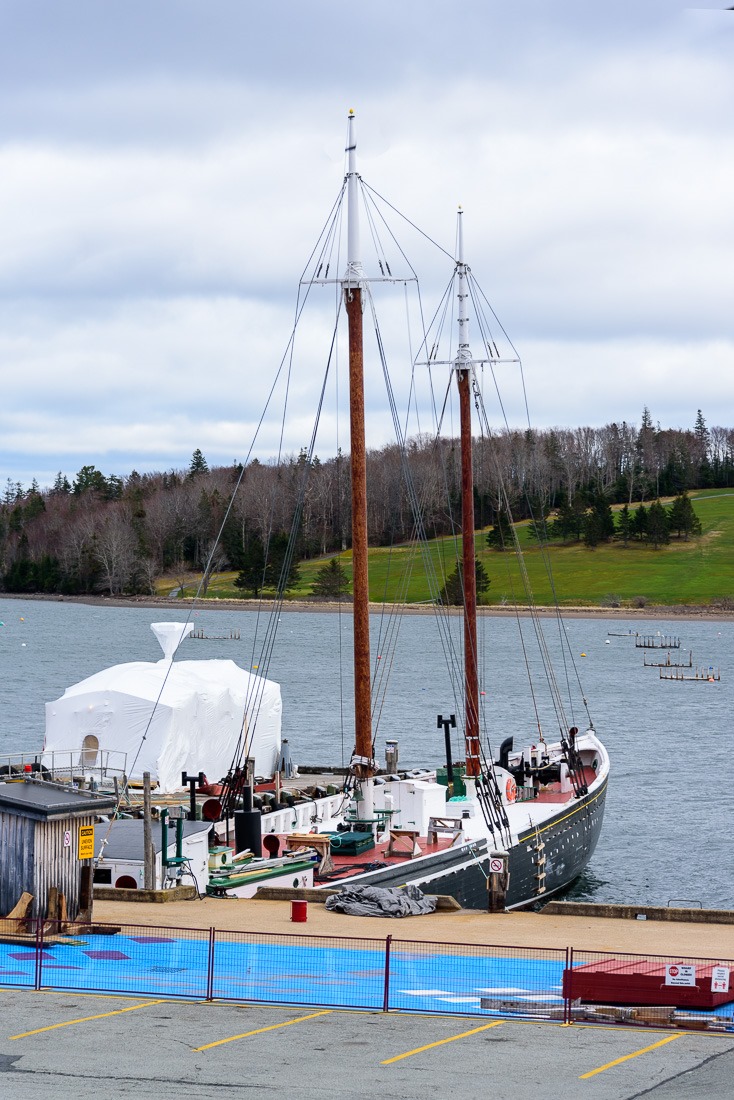 Then the small trips in and around the city. Lunenburg with the famous Bluenose II (number 1 had floundered many years ago). We didn’t get to see it sailing, but this was already much better than sitting inside. 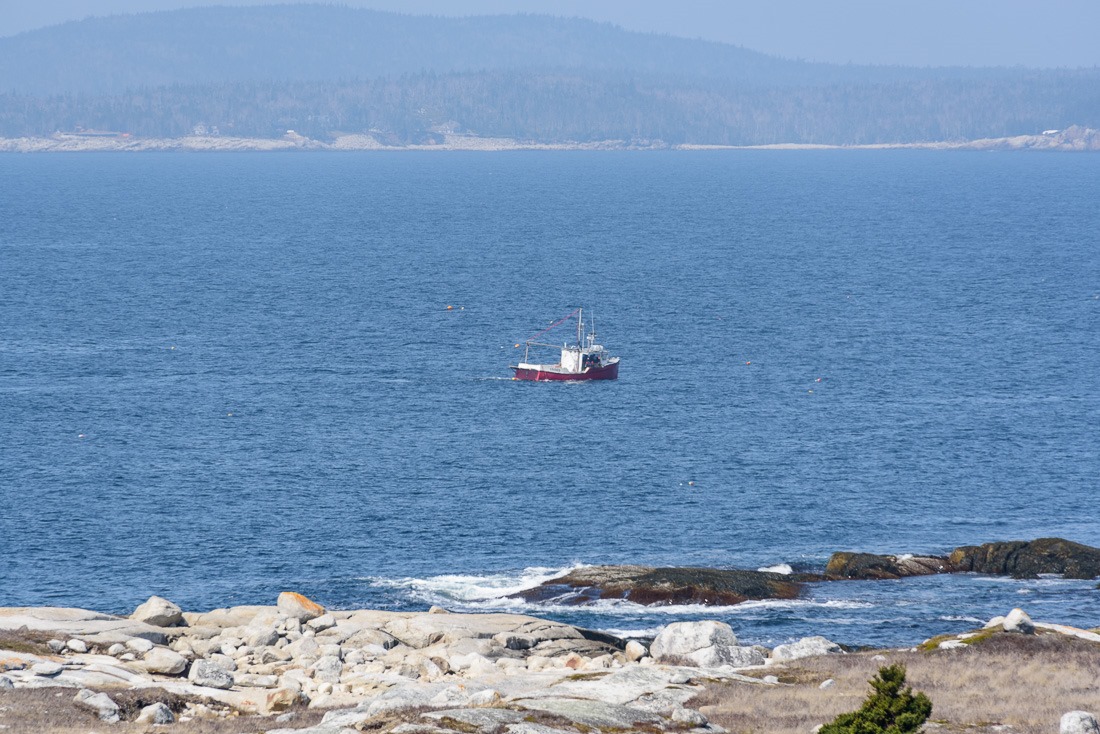 Once we were free to move around again, the search for a new house started. There was simply no way we’d stay in a damp apartment, even if it was in one of the better buildings of the city. During the searches we did get to see a lot of different places. It goes without saying that I always had my camera with me. Even if it was just to shoot a lobster boat like the one above. 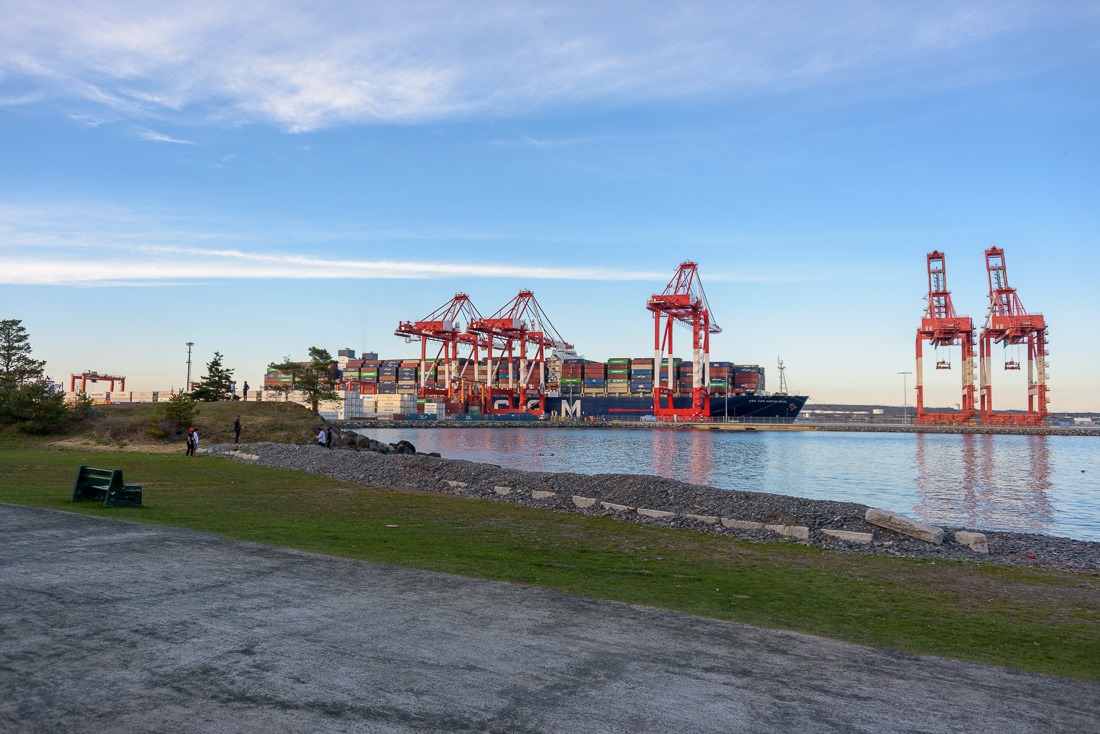 Once back “home” in the apartment, often enough it was time to go outside and walk, instead of sitting in the car all the time. Point Pleasant Park was only a few blocks away from the apartment so the camera got quite the workout there. Above are the cranes that unload a good chunk of Canada’s goods used in every store in the country. The noise they make can be heard here. 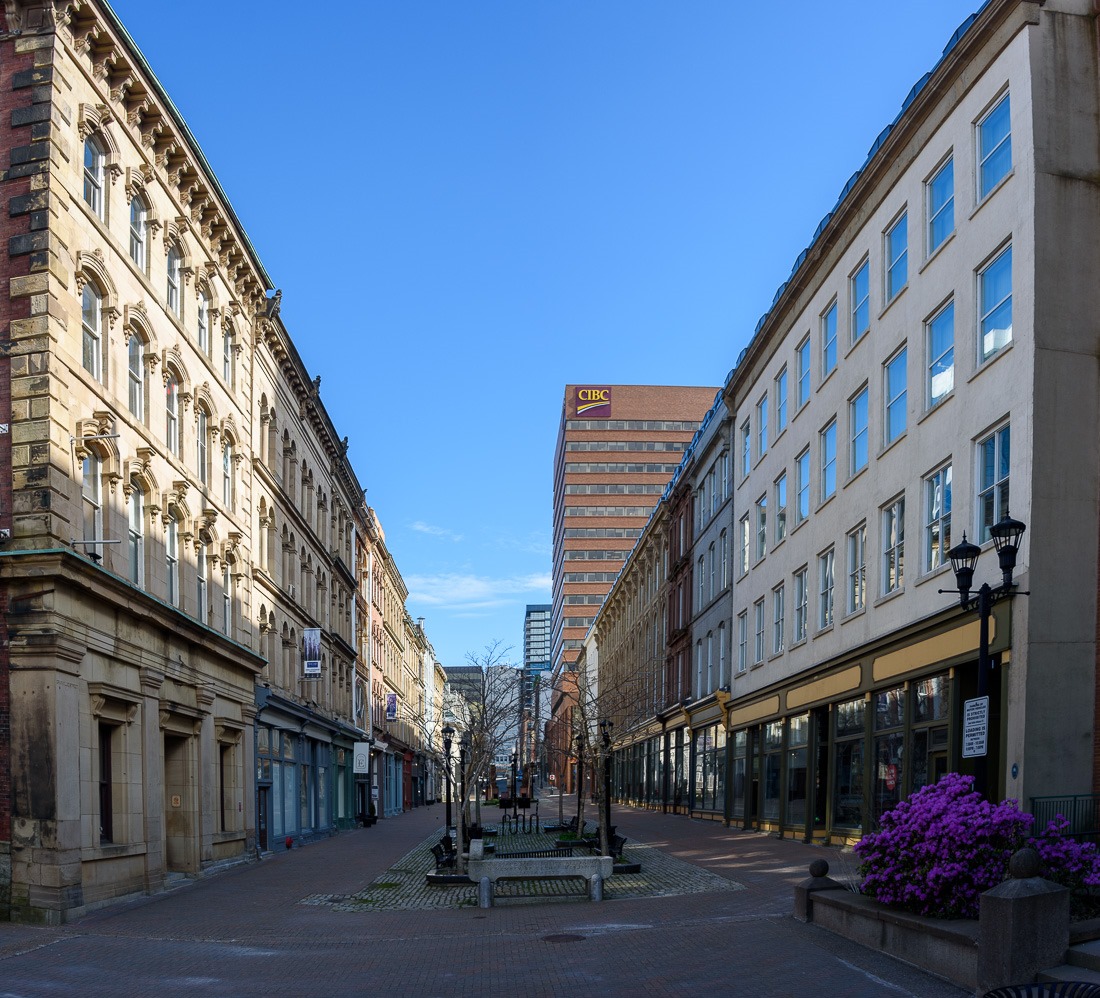 Meanwhile, the city of Halifax remained very quiet. Restrictions imposed on all businesses put a strain on a great number of them. It did make for interesting photography. With no stores attracting people, squares and streets remained uncharacteristically empty. Bad for business, good for photography 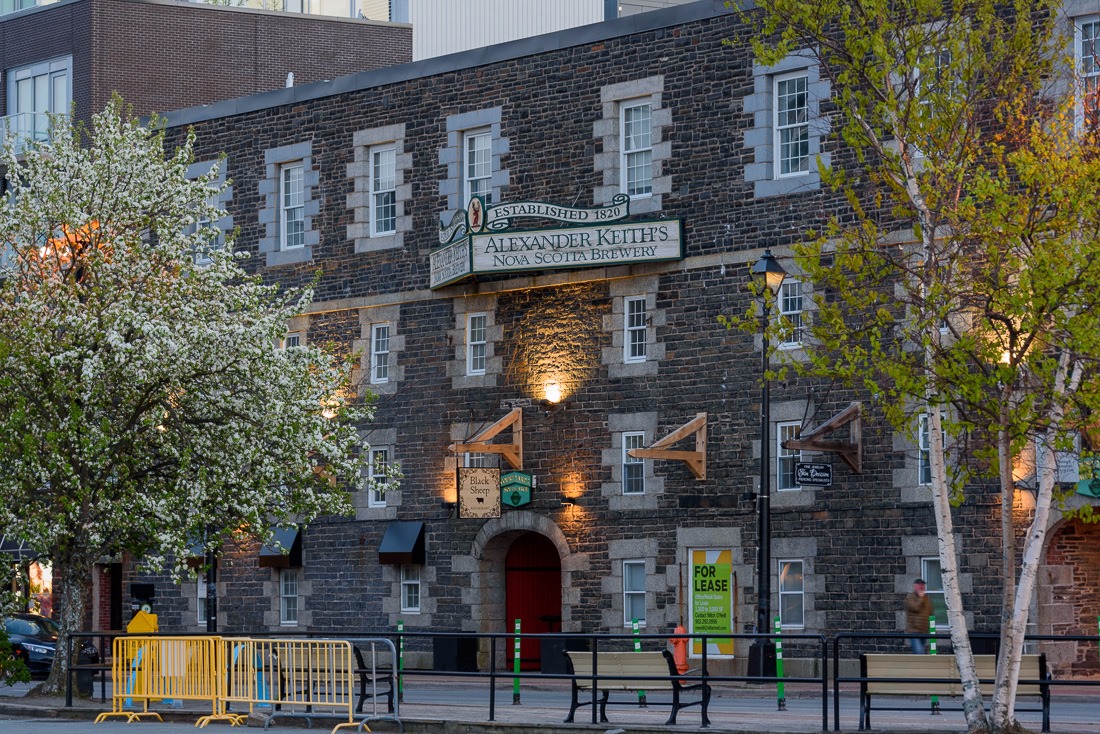 Closer to the apartment, the ancient breweries of Alexander Keith now are home to luxury apartments and a hotel. The nice part here is that the old facade has been restored and still looks like the original. In too many cities the facades as well as the buildings are demolished. Sometimes indicated by a small plaque on the new building that history was made in this place. Just not in that particular building. 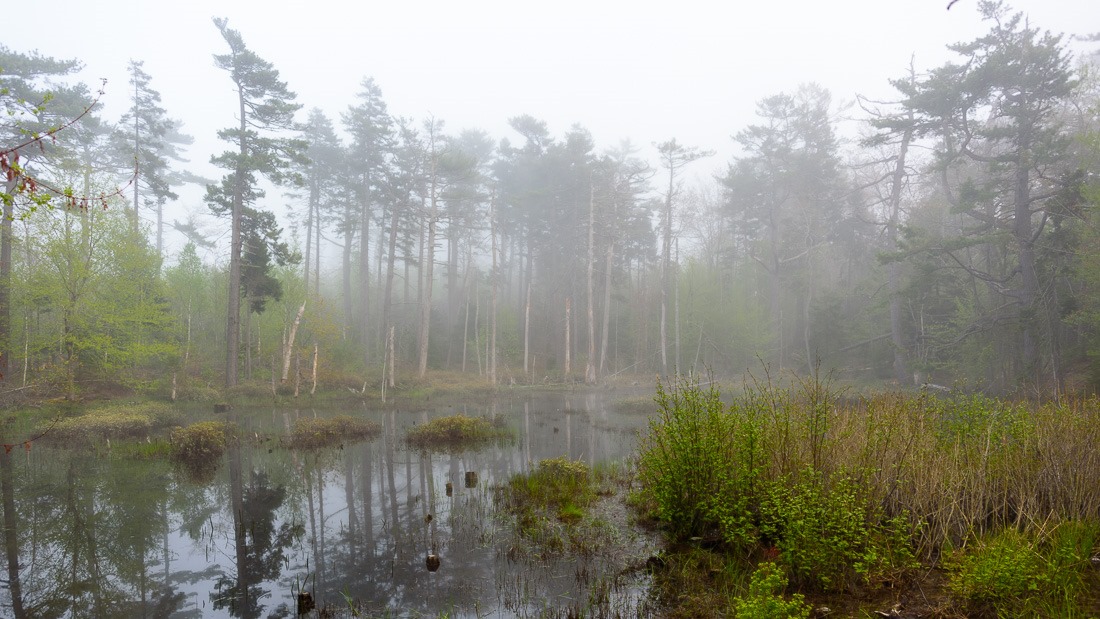 Then the slightly warmer days arrived. Point Pleasant Park was getting greener and greener. Spring Peepers were whistling their hearts out to attract the opposite sexes. The pond above was deafening with those little frogs. Yes, Spring Peepers are frogs, not birds 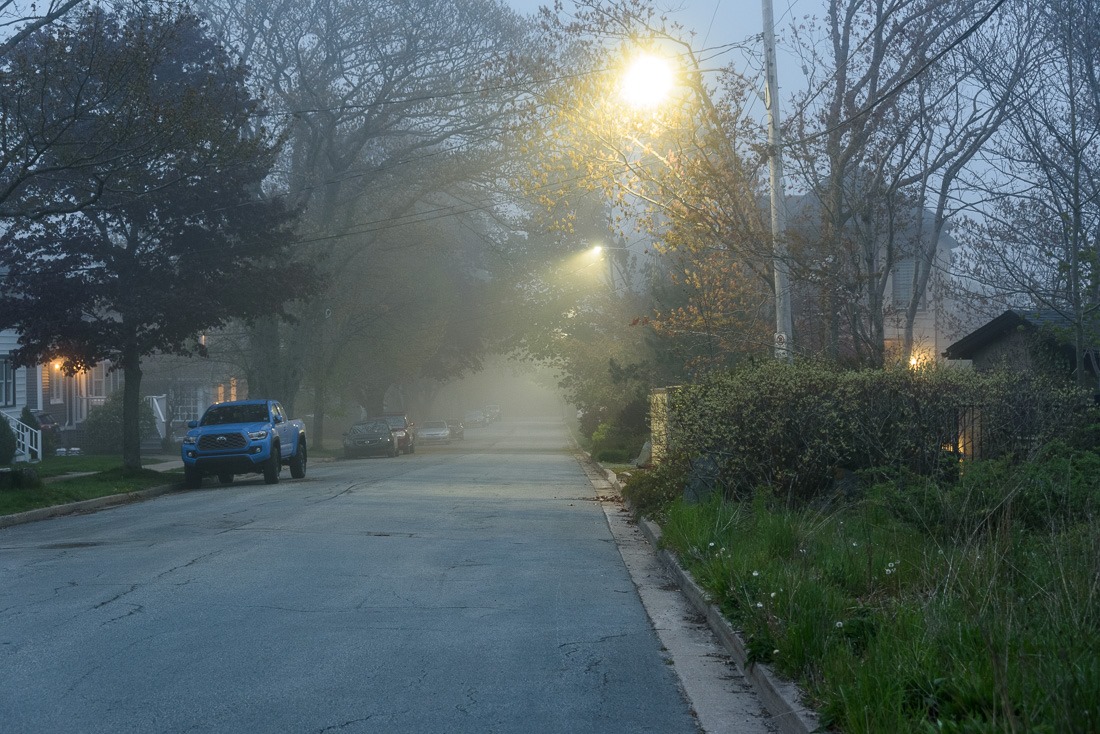 Foggy street in the evening

The month of May seems to be a foggy one. Foggy mornings, foggy evenings and nights, foggy brains… Above is a small street in the south end of Halifax on one such foggy evening. There is nothing like fog to create moody pictures. Even if there is not much to show, fog makes it pleasant to look at. 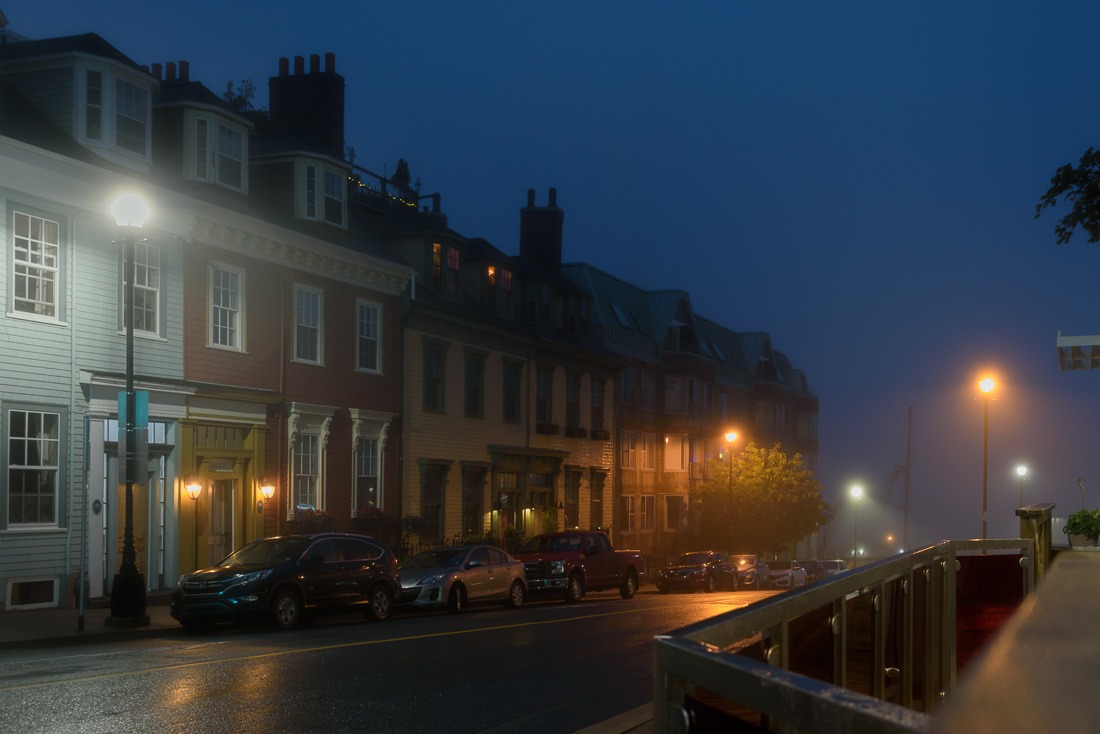 Walking down to the water line

Evening fog does require a tripod so that the atmosphere can be shown as much as it was felt by the photographer.

The past year was a moving year in many aspects. This post only shows the first part of that year. A first year in the Maritimes or Atlantic Canada. For now I haven’t been able to do much travelling, too many other things require my time and effort. Yet everything beautiful is close by. Sometimes as close as the backyard.