As I have stated in earlier posts here, my 2TB drives started to get full. On top of that, one of them seemed to have some “hiccups” from time to time. Nothing serious, just a file “slowing down” to a crawl when accessing it. Copying the file and renaming both copy and original solved that issue. Yet a disk check didn’t reveal any issues. So it was time to replace the drive as I couldn’t trust it 100% anymore.

On top of that, it had been used intensively for about 7 years. Not something I’d say that is excessive, but for today’s gear, it might have gotten to its end of life. No need to get angry at one brand or another

So I went to the store and got myself two 4TB external drives as replacements. This time I went with a Western Digital drive instead of the Seagate. I like the form factor of the 2TB Seagates, but not the 4TB ones. They look too bulky. These WD drives are still small enough to fit in a pocket. 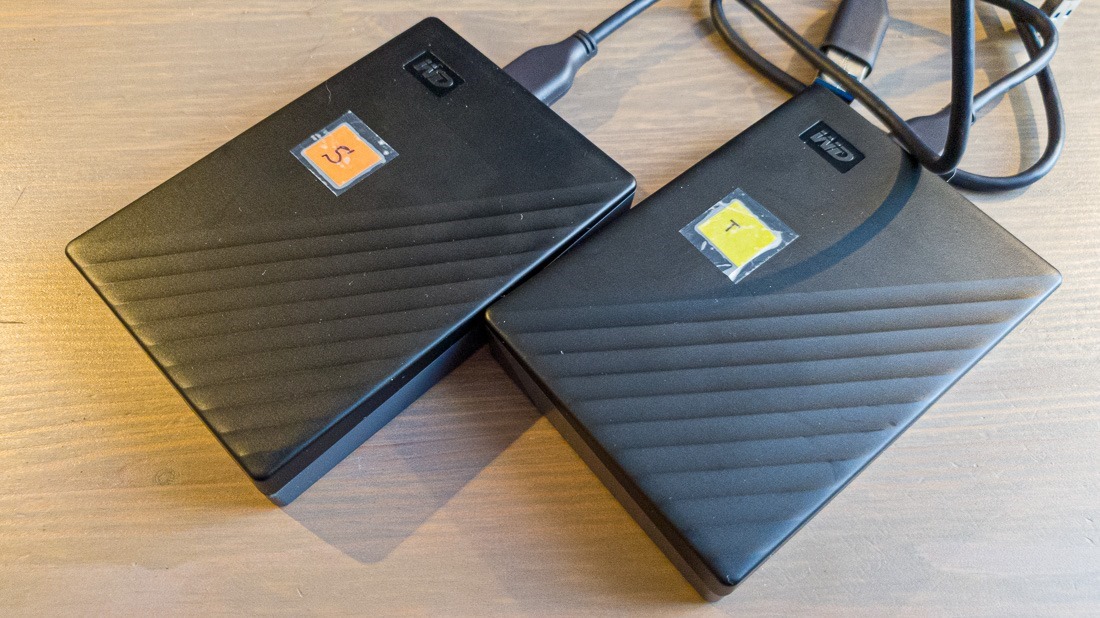 The first order of the day was to erase everything from the WD Passport drive and prepare it for what I wanted it to do. Not much, really. Simply reformat the drive to make sure nothing was missed. Then the copy process started.

At first, I had both the Seagate and the WD drive plugged in to the USB3 hub. That proved to be a mistake. The hub was not powered enough to keep both drives running at full speed at once. Every now and then, one or both drives went “offline” or missing and the copy process had to be restarted. While this may not be an issue if copying would take a few minutes, the copy time estimated went from 7 hours to 7 days in those moments.

7 DAYS of copying files! That was simply unacceptable. So I plugged in the WD in a different available USB port on my PC and restarted the copy process. It announced 11.4 hours. So I went to bed and checked it the next morning. At that time, the remaining time was estimated at 30 minutes. No, I did not sleep for 11 hours… the estimate had been too long and had been adjusted along the way.

Then it struck me that I had plugged in the WD drive into a USB2 port, severely slowing down the copy process.

It did give me an inkling of what the copy speed would be should I make a backup copy to The Cloud of whatever provider. Basically, internet speeds are somewhat similar to USB2 speeds, despite what the providers claim. My provider claims 600 Mbps (600 Mega bits per second) but that is for download speeds. Uploads (towards the cloud) are topping out at around 100Mbps. Downloads are faster:

Granted, it’s not often that you upload 1.3TB of data at once. It’s more likely to happen over a long period, so you won’t know what is accumulating there. But just imagine the time it will take to get your stuff back from the cloud in case you need that. The shown download speed is the result of a Wi-Fi card topping out, not the Internet Provider.

I’ll stick to my solution of local backups with local, physical drives.

The next drive was to copy over another version of the same files. By now you all know that I have multiple copies of any drive that matters. I didn’t make the same mistake to plug it in to a USB2 port and the copy time announced at the start was some 3.5 hours. That turned out to be more or less accurate. Since the copy process will at first do an estimate of the remaining copy time, it doesn’t know (yet) what kind of files it will encounter. Big files are slower to copy, but eat up the byte-count faster. Small files will copy faster but will hardly put a dent in the total bytes to copy.

In the end, all files need to be copied and be secure. That is what that second drive is for.

Once the copies were done, it was time to adapt GoodSync, as the drive connected to my T: (drive letter) was no longer the same, the “auto-backup upon insert” no longer worked. GoodSync expected a Seagate drive, not a Western Digital. Once that was adjusted and one copy/check made, GoodSync was also ready to do its job again. All these processes are guided by the software, no guessing required.

I guess I’ll be happy with these two drives for a while.

Making backups is part of a photographer’s duties. In this age of digital “everything” there is no excuse for losing one’s memories or even business. Backups are essential and need care and preparation. If a drive shows signs of failure or is getting full, it is time to replace it or extend it with a new drive. For the price one shouldn’t have to wait a second. 4TeraBytes at Costco/BestBuy/Staples are around CAD 130, and often on sale for even less.

Go out, take pictures and back ‘em up!