Reorganizing Lightroom and its photo library

Photoshop was perfect for what I needed. Since 2005 I had a digital camera and all my pictures went on my C: drive in several folders. Right from the start I had decided to organise my pictures by date, or at least by year. Then came the moment where the first 9999 pictures were taken and the camera restarted its file numbering. Another folder for that year and everything went fine from there on. That occurred a few times, then I got a “real” DSLR, a Nikon D40X. File numbering restarted at 0001, luckily with a different prefix for the name (DSC_).

Photo files started to accumulate in different folders, with duplicates named slightly differently for processed pictures. Then came more folders as sometimes I was shooting panoramas or (difficult with with a D40X) some HDR-type shots.

Windows had been my OS since 1991, so I was used to the folder system and organisation. The first thing I did when I started shooting was to get out of the “My Documents”, “My Pictures” and the “My …” type of folders. Windows was storing stuff in there that I definitely didn’t want mixed with my own. Back then it was Windows XP, escaping from the “My anything” grasp was fairly easy. Later that became more of a problem, so I resolved in putting all my stuff on a second internal hard disk.

In 2007 Lightroom made its appearance and I was immediately sold on its ways of organising my pictures. The catalogue became bigger and more organised by the day it seemed. Also, the number of photos grew exponentially, filling up my internal drive.

Then came the external drives, At first for a backup copy, then another one to store less-used photos from previous years. Then one external drive for a whole year, or two, if I could squeeze them on there. The number of photos had grown from 500 per year to about 8000 per year. Needless to say that the number of external drives started to multiply. At the expense of my wallet, that is well understood. 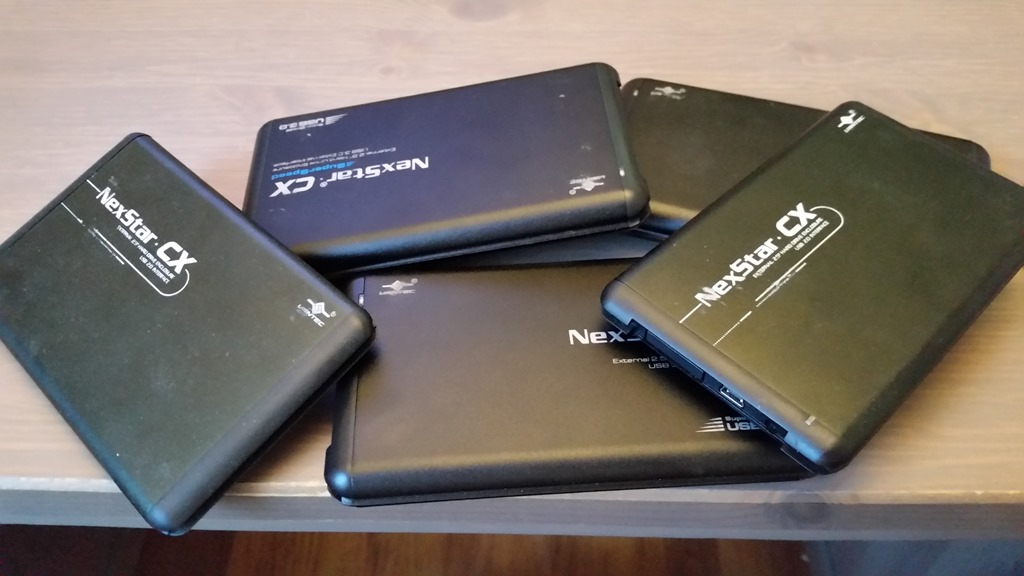 Part of the collection

Photos started to be stored everywhere, my collection started to look like the old-fashioned shoe-box storage systems. Some with and most without any form of organisation.

It was time to do this well. Just to keep the next “disk full” message from appearing too quickly.

I bought yet another external, with a decent 2Terabyte storage size this time. The total of my current collection of pictures is about half that, lots of early pictures were stored as JPEGs. Today my catalogue contains about 60,000 images, all organised by year. Files are renamed with a date in front of the original camera-generated name so duplicates are no longer an issue. I have never shot more than 10,000 pictures in a day, so there’s no issue to be expected there.

I store the current year on my internal SSD drive, reserved for the pictures. Another smaller, SDD drive contains my catalogue only. Speed is now really good, even if some more improvements might see the light of day soon. Previous years get moved to the external drives at the beginning of each year. Until that drive filled up, and then a new drive was added to the collection. Keeping track of them in Lightroom was not an issue, Lightroom knows where its pictures are supposed to be and all you have to do is label the disks accordingly. Plug them in when needed and you’re good to go.

Yeah, right. After a while, updates to the pictures like keywords etc are getting out of sync with those drives. And the mess restarts to build up.

Finding the right drive was easy, but duplicates had started to creep in again. Also, different pictures of identical years were stored on different drives, making it difficult to find the right one. Granted, Lightroom can find the picture for you, but only provided the correct drive is plugged in.

The first thing I did was copy (not move or delete) all drives onto the new 2TB hard drive, one at a time, keeping the structure that was on the original drives. Since most of the newer files have a date in them, the issue of duplicate filenames didn’t occur. Thanks to a Lightroom import preset setting for this.

Once all the copies had been made to the new drive I unplugged all the old drives and left only the new one, resulting in the picture above. Most files were “missing” from Lightroom. Then I plugged in the new drive. Lightroom had no idea what was on that drive and that was exactly how I wanted it.

Folder by folder, I now made Lightroom “Find” the missing folder by pointing it to the new drive. All pictures were already copied, so the only thing Lightroom had to do was store the new location in the catalogue. A matter of seconds. Little by little the old drives were “emptied” from their folders, until nothing was left. At that point I removed the now empty drives from Lightroom.

The result shows below: 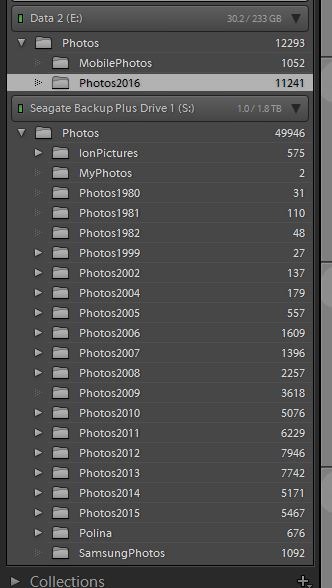 As you can see, only the mobile photos and the photos of 2016 remain on the internal drive, all the rest is now consolidated on a single external drive. One that I religiously back up every now and then. That depends if I shoot a lot or a little since the previous backup.

Now all my pictures are available in one place, until the 2TB drive fills up again. The only thing I need to do is plug in the drive and I am in business. Making physical (bit-to-bit) copies of this drive is easy with all kinds of backup software.

A lot of work? Not that much, it took about 30 minutes to get everything into place. There may be better ways with NAS drives etc, this is my way, as my Seagate drive can be used on any computer. No special formatting or NAS OS (Operating Systems) that will interfere or impose buying more material to get my stuff back.