A crooked smile or Bell’s Palsy

This post contains pictures of a more personal nature. If you’re not used to that, don’t read this.

On January 18, 2013 I felt a bit strange. Now you’ll tell me that that’s no surprise, but this time it was. For a while already I had been warned by my doctor that my blood pressure was a bit too high. High Blood pressure comes with risks. One of the risks is stroke.

A very good friend of mine in Holland had been in coma after a stroke since a week before Christmas and had just woken up. Not in the best of shapes either. No walking, no talking and worst of all, apparently no memories either. He had had a severe stroke due to, among other things, high blood pressure.

On the night of the 18th, I went to bed as usual, but woke up around midnight. The right side of my face had no feeling and I couldn’t close my right eye. Later I also found out that I couldn’t smile, although smiling was the last thing I had on my mind by then. 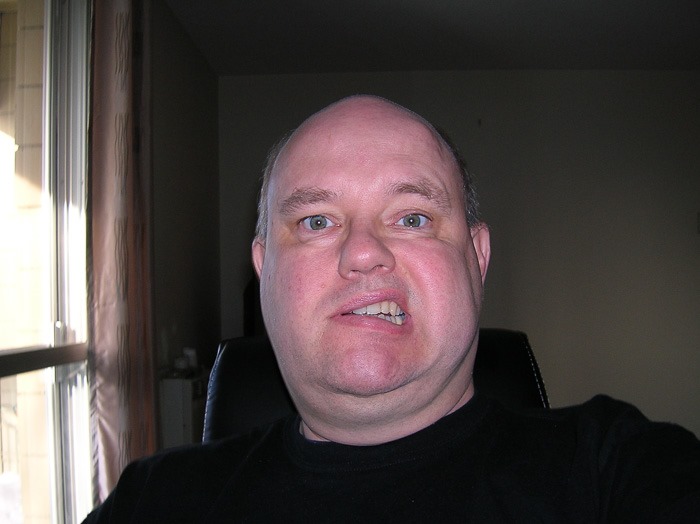 It feels like my mouth is completely open, showing all my teeth

I had read up on stroke symptoms and with my high blood pressure, this was one of them. I woke up my wife, saying that I could not smile. Not the best of wakeup call at 12:30 am, I agree. All she had in mind was sleep. But she got up pretty quickly after I started calling 911. They immediately asked me if I had had a stroke before in my life and that confirmed my fears.

Already I saw my life changed into a harmonious soup of vegetables without salt, burgers or beer. All sprinkled with soft New Age music all day long to keep the pressure down. Sigh.

The paramedics arrived a few minutes later and gave me my, way over the limit, blood pressure. Nearly as high as my friend in Holland. In other words, I started to freak out over this and needed serious help. Arrived at the hospital I felt a little calmer. If anything happened there, at least I would be close to help. The waiting time was pretty long, the room was full of people with other emergencies. I cared about none of them, to be honest. Once I was admitted, the first tests were done and I was told not to worry. Easy to say, not so easy to do… A few hours later, the diagnosis was made by a doctor. Surprise…

Diagnosed with Bell’s Palsy. But what was this? I had never heard of Bell’s Palsy before. Let alone the word “palsy”. What the hell was that? Was it dangerous? Was it serious? No idea. Thanks to our modern smartphones, I looked it up on the internet and came up with photos of people with deformed faces. I couldn’t close my right eye, it was constantly filled with tears and useless for reading. The other eye is not much better since I need reading glasses for that one. I hadn’t taken those, obviously.

After drying the eye, I tried again and saw that Bell’s Palsy is a condition of the 7th Cranial Nerve. A first for me, never heard of that one before either. The seventh Cranial Nerve is responsible for facial movement. And mine had been infected by either a virus or stress or high blood pressure. My idea is that it is a combination of all together, plus a nice cold beer for dinner. A few hours later, I was taken into the CT Scan room and taken for the scan. Nothing there, it showed a few hours after that. Wow, no stroke and no signs of blood clots or cranial cracks. Not that I expected any cracks in my skull, not in my line of work. 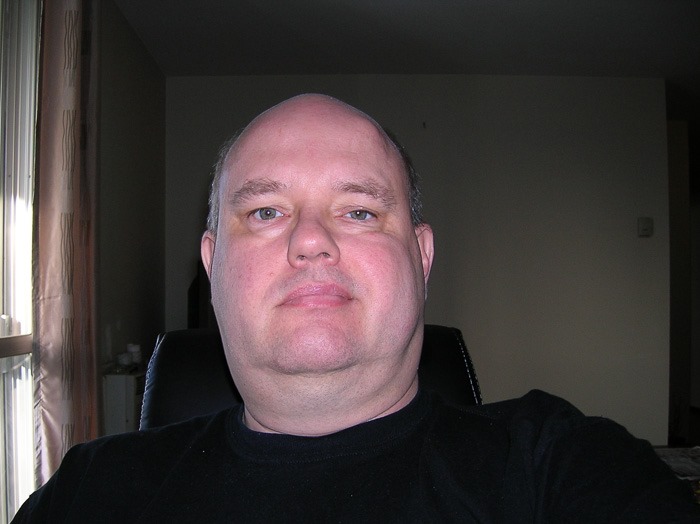 I was calmed down, the blood pressure was way better, if still at the high end of normal.

The next day I could go home from the hospital, after a long night of waiting and waking. Both my wife and I were exhausted, both physically and nervously.

The medication I got for Bell’s Palsy was Prednisone, a corticosteroid. Never in my life I had thought to be on steroids…

. That was reserved for Tour de France runners and other, not so honest, sportsmen. At least in my mind…

In addition to the steroids, I had to take some pills to lower my blood pressure and I added myself some heavy dose of Vitamin B12. That seemed to come out of my “research” on the internet, on all kinds of websites. From medical to out-right funny. They all talked about B12, so I thought that couldn’t hurt. 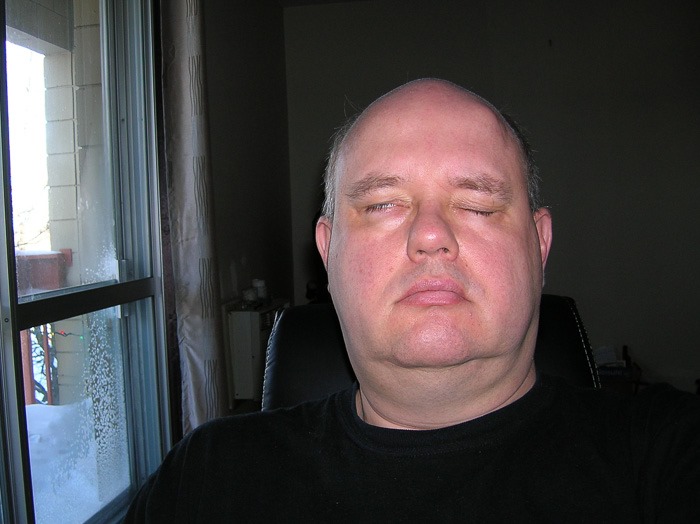 As if my eyes were both closed…

On Sunday, the first twitches came back to my face, the first signs of recovery of my right hand side of my face. It’s not funny to eat soup with a straw, since what you put in one side of your mouth will come out of the other side without you having any say over it. Those soup balls didn’t go through the straw, though. Also, even if you think your mouth acts normal, it doesn’t. Mouth closed? Yeah, sure, but only half. Rinsing your teeth after brushing? Sure, but prepare for rinse water all over the bathroom, since your lips have no power to keep that inside.

January 21, it looks like my face is even worse than the previous days. My cheeks is even stuffier than before. My talking is even more slurry. Where is this going?

January 22. Same thing as yesterday. Apparently no change. However, if I do some very light massage on the affected side, a few minutes later the muscles start twitching a little. I don’t know if that is a bad or a good sign, but at least it is a sign of “life” there. My face is drooping a bit more than before. Later I learned that the deepest of the crisis is a few days after you first notice the symptoms. So this was the day.

January 24. I woke up with half of my face twitching with nervousness. Perhaps it is a sign of getting better (already?). But it drives me nuts. I feel the part of my face moving like crazy while I have no say over it. My smile is still crooked and my right eyebrow still doesn’t raise. But twitching? Yeah, lots of that going on. 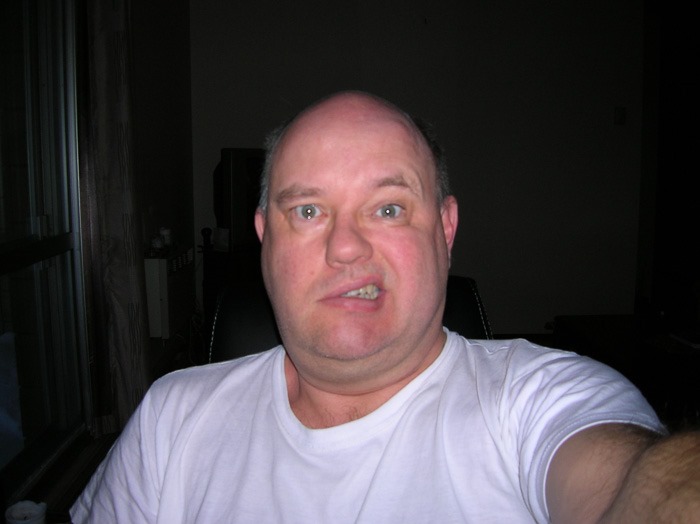 A little better, but still not original

January 30. By now I have a very timid smile on my right side. You can’t really call it a smile yet, but there is movement in the corner of my mouth. The right eyebrows moves slightly, that’s already a good thing. My eye still doesn’t close, but that will come. There are signs of improvement. Bought an eye patch against the extreme cold. It will go down to –35C in the next few days. Not the best time to have your tears freeze up on your face. 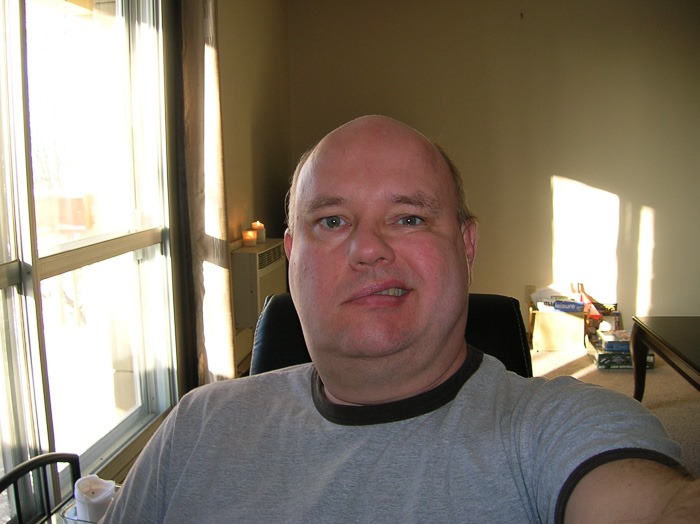 February. Nothing much to report, except that week after week I did notice a lot of improvement. By the end of the month, my face is acting normal again, although a bit slow and not as strong as before the crisis.

March 07. While Bell’s Palsy for most people lasts for about 6 months, I seem to have recovered for about 98% by now. Sometimes, the muscles and nerves are twitching a bit, but my eye can close normally again and I can eat decently again. I got a letter from the neurologist to show up in his cabinet coming August. Apparently they don’t expect such a speedy recovery. All the better for me. 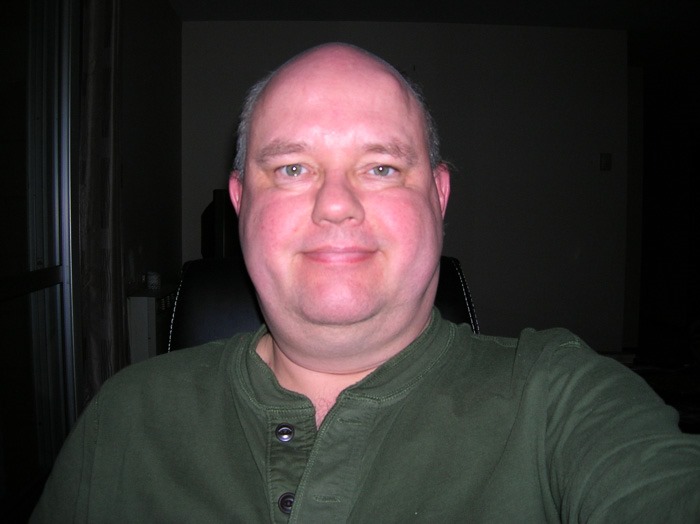 Anyway, now it is a bit more healthy eating, a bit more exercise (I have never been a stickler for exercise). I guess I will be using that home trainer a bit more from now on. The next target is the blood pressure. But that is a whole different story and I am sure I can get that one within range as well.

All the pictures here have been taken with a Camera phone (or phone camera) or my old and trusty Point and Shoot camera. All from the length of one arm, no fancy setups, no special lighting, all straight from the cameras. You don’t like the pictures? Fine, neither do I. But perhaps it may help someone out there who is suffering from the same problem.

An additional “problem” often noted on the internet is “Social isolation”. Hmmm, Bell’s Palsy is an infection of a nerve, not something that you catch in the lower streets of [fill in your worst city here] on a drunken night

. This is simply an inflamed nerve that unfortunately has nowhere to go. It is encased in bone for all of its length and when it needs to expand due to an inflammation, it pinches itself, leaving you with half of your face being unresponsive. Don’t worry, it will get back. As for the “social” problems? Do you really care?