First of July is Canada Day. Canada celebrates its independence from England since 1867. However, the last bonds with England were shed only in 1982. Even more reason to celebrate this day. And no, we don’t celebrate the fourth of July like our southern neighbours. 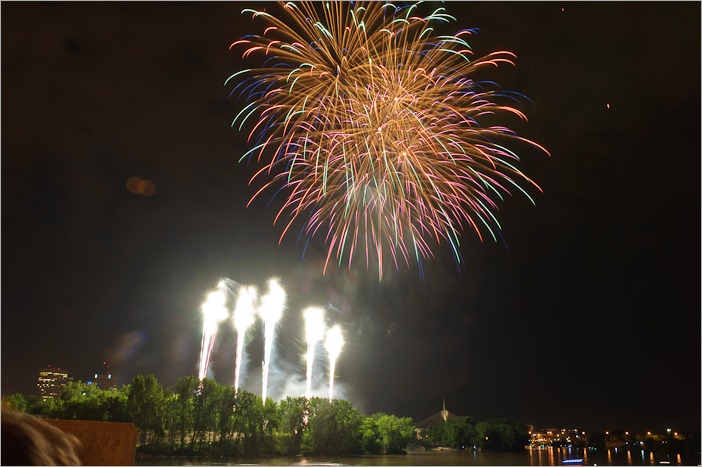 We are happy to be independent from any other country in the world.

But what are you going to do on a national holiday without any plans? You could go to the different street festivals in the city, stay home or go to the zoo. I decided to go to the zoo and take pictures of the fauna. The Assiniboine Zoo is free on Canada day, saving me a whopping 5 dollars entry fee. But what to do in a zoo at a +32C temperature?

Obviously if you think that you can get a quiet picture of that very shy little animal coming out of its hole for its daily food, you’re mistaken. Even the groundhogs that live freely in the zoo didn’t show themselves. And they are not the shyest creatures to begin with. I caught one, before the “kids” scared it back into its hole. 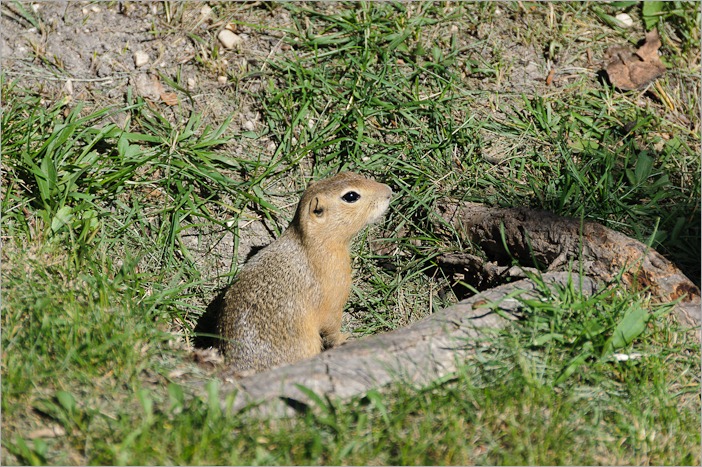 Some of the kids were yelling at the tigers things like “Tigger, Tigger! Come here, I’ve got your favourite food!”, upon which I was thinking of yelling the same thing, picking up the kid and wiggling it in front of the tiger … 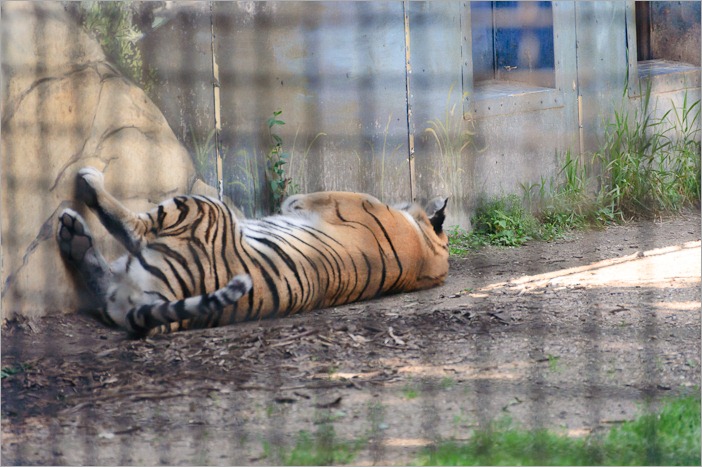 “Tyger, Tyger, burning bright…”, well, not this one…

You may have these thoughts on a normal day, but not on Canada Day. Good for the kid, hah!

The Assiniboine Park Zoo was full with people. So full in fact, that I was thinking that the animals inside their cages had a lot of space, compared to the visitors.

The thought of taking pictures of quiet animals was not the right option for the day. I decided to go for the wildest and weirdest animals in the zoo: people. 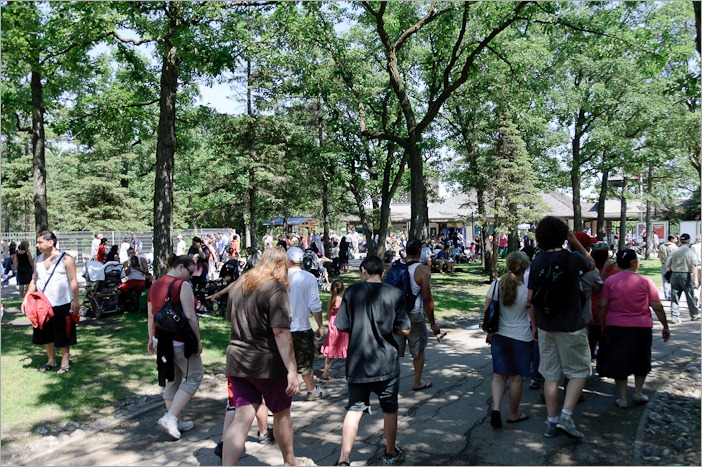 People are weird, even more in the zoo. At a nice +32C (yes we can have that temperature too in Winnipeg!) all the animals who are used to the more “temperate” climate of the city are simply lying around, waiting for the day to finish. Myself I was sweating, like I did when I was living in the Caribbean. Used to these temps, I simply move a bit slower, no problem.

Some of the women were cooling their ample bosoms with ice-cold coca cola bottles (no picture here guys!), others were shielding themselves from the sun with whatever they could find, like a cake-box (?). It is definitely not a hat… 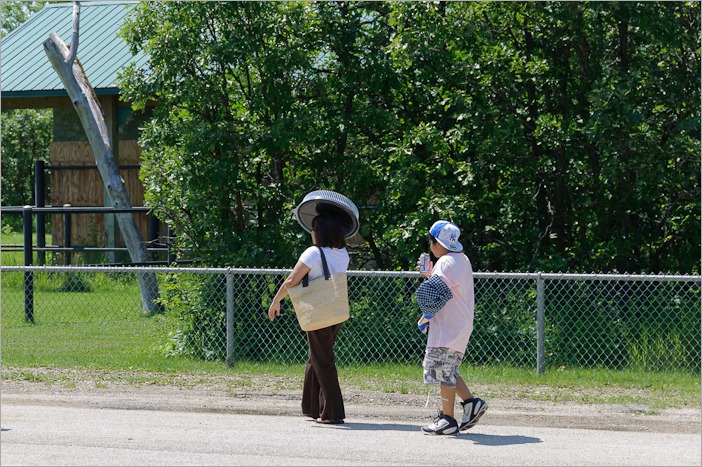 People who are not used to higher temperatures don’t know how to be comfortable in them. So they undress themselves, giving all of their white surface to the sunshine… All fun for the evening and the night to come. 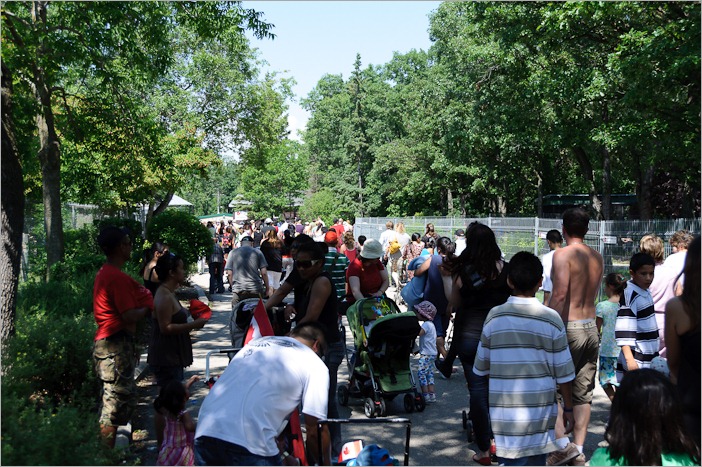 But of course the animals were not to be forgotten. After all I was in a zoo. Most of the animals were just happy to be surviving the heat and were looking for the coolest places they could find. 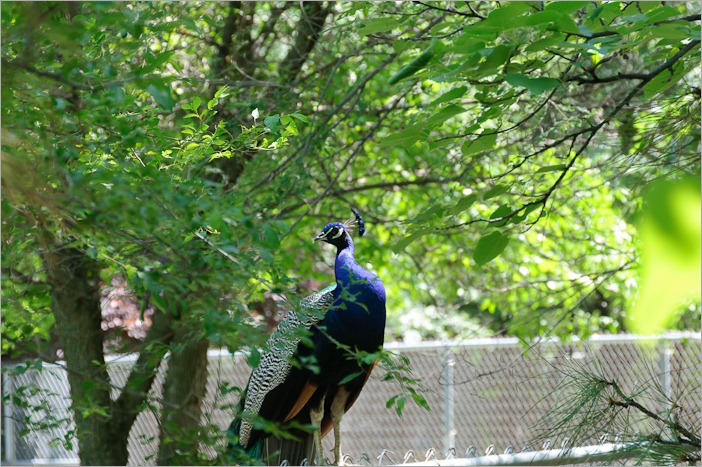 Getting high on a fence and keeping cool

Taking pictures in a zoo is always a kind of a challenge. Most of the time you get too many bars or chicken wire in between your camera and the animals. Therefore I tried the following: get as close as possible to the bars, use a big opening like f/3.5 or f/5.6 depending on where I am, and try to focus through the bars and get the animal sharp. The bars will then be out of focus and distract les from the subject. 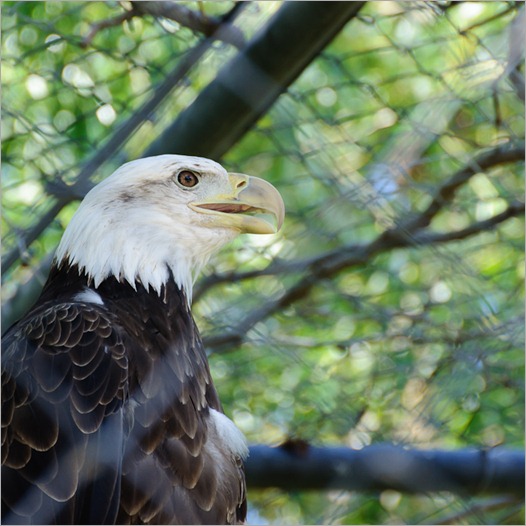 Sometimes it works, sometimes it doesn’t. I guess that the wire for the eagles has to be of better quality than for the flamingos. The flamingos too, were behind wire. 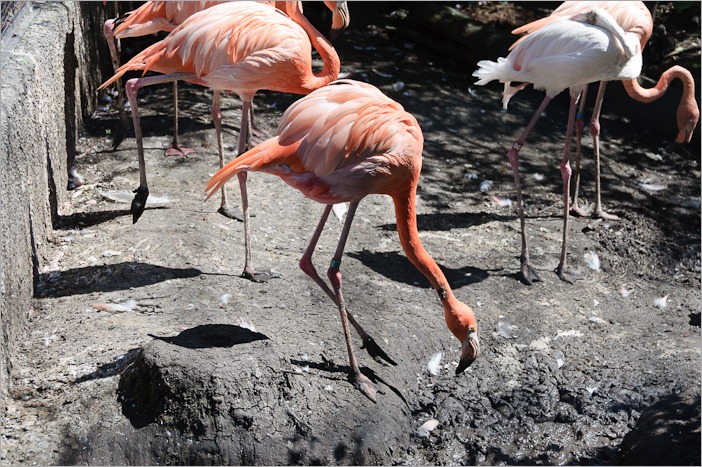 Flamingos, finding food in the mud

The people in the zoo kept trying to get pictures, even from vantage points where they were not supposed to be, taking pictures of well lit wire… 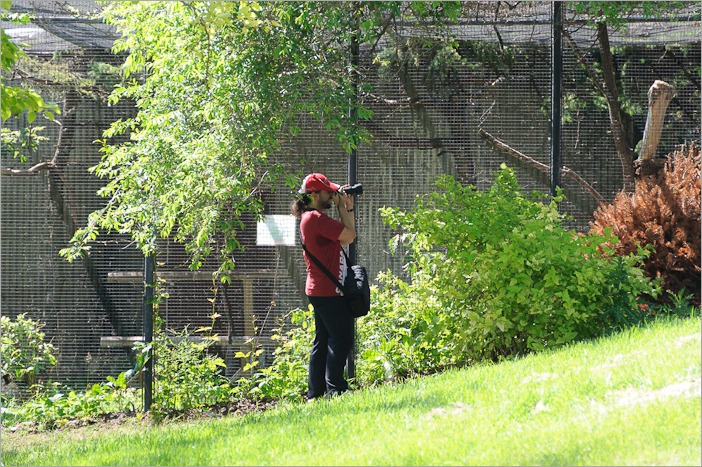 Apart from the zoo inmates and the visitors there were also the smaller critters that were happy to get enough to eat this day. Pieces of fruit, nuts and sometimes rests of chocolate bars were easily found in the garbage cans. Since the “attractions” of the zoo are not supposed to get to these cans, there is no special protection to keep any animal out of them. 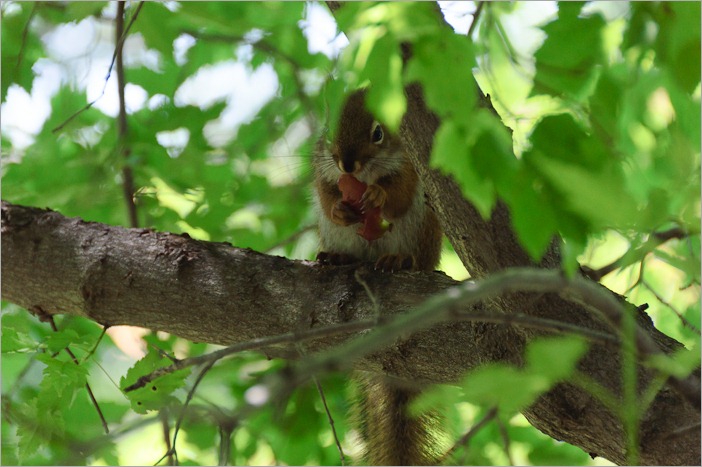 I don’t know what this little squirrel was eating, but it was good enough for it to be no more than a few meters away from the people and still not be afraid.

Canada Day this year had a lot of attraction for all of the people in the zoo, as well as for the animals. Later in the afternoon I went home, leaving the sun-scorched zoo behind me and cooled off in my fridge, ehm, apartment. A basement apartment can have its advantages by times.

The evening was again a nice outing, this time to the Main Street Bridge. From there, the fireworks provided by an award winning company called Archangel Inc., was as usual a very nice performance. The starting picture of this blog is only one of the bombs they sent to the sky.

Before this, however, the police was keeping the boats from getting too close to the launch pad. 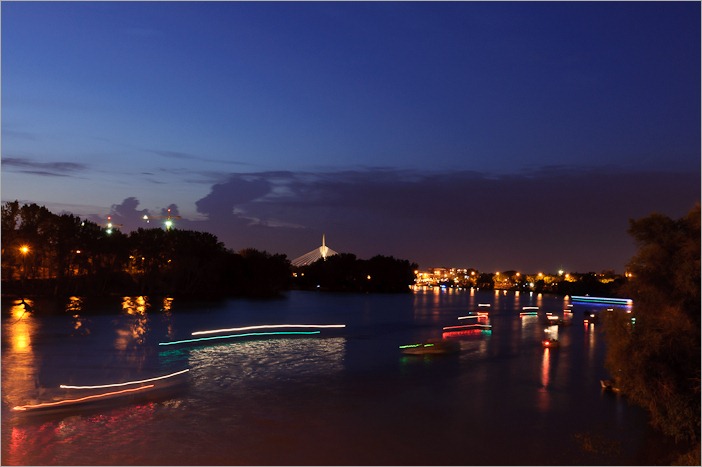 Red River, Provencher Bridge, Esplanade Riel and to the left South Point or the launchpad

The blue streaks are the police boats, the rest, well, I guess they were there to watch, like all of us.

Once I got home, the only thing left to do was take a shower and get to bed. I treated the pictures today, no need to rush things, eh?

Till next year, for another Canada Day!