Hmmm, yes, that’s how I feel about many, if not most HDR pictures.  High Dynamic Range may, however, be a good way to go if your camera is not capable of seeing the way you see. 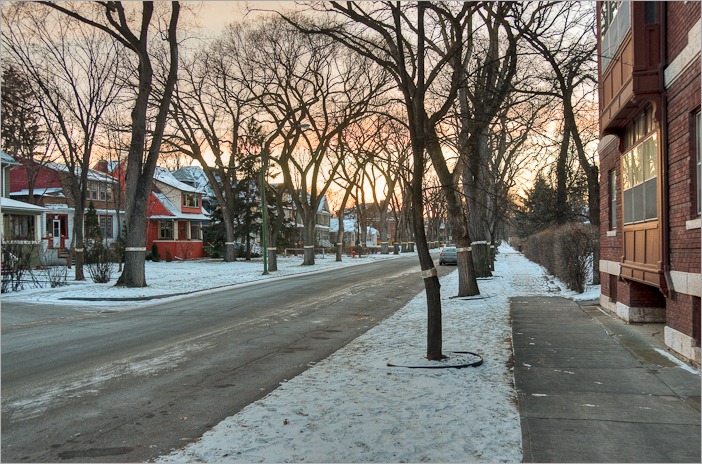 The camera has some its shortcomings, whatever money you put in it. HDR or High Dynamic Range photography is one way of overcoming that limitation.

I wish I could say there were many more ways. But the camera manufacturers apparently all have gone the way of HDR. Most middle and high end cameras are now equipped with “bracketing”. Bracketing means taking a few shots as quick as possible, but with different settings for exposure.

It means that with a D90, you can end up with three shots like these:

Why are we doing this? Well, the problem with digital cameras is that it can only “see” so much. After that, the rest is either too dark or too light. Blown out skies are seen all too often with digital cameras. Film had a better way of handling big brightness differences, but the digital sensor is far from that.

In the example above, the first picture should have been enough if it were for our eyes. The camera, however found that the sky was too bright and blew it out to white. When I tried to get the sky correct, the rest of the image went too dark. And to get every detail from the darker side of the picture, I had to over expose it.

HDR has come to the rescue. 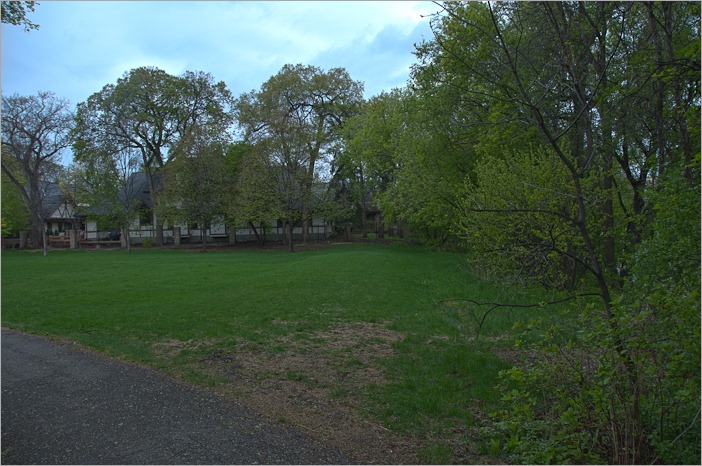 This is what I saw

What I saw was this, well, more or less. HDR is a “sandwich” of differently exposed pictures, with the darkest parts “cranked up” to be lighter and the lightest parts dodged down to become interesting. The middle part, well that’s for reference and colour balance.

The above picture is straight from Photoshop CS5, no other enhancements performed. Basically that is what any newcomer will do. And he’ll be happy with it too.

There are also other programs that can do the same trick. CS5 is a bit on the steep side, moneywise, so we could go with Photomatix. 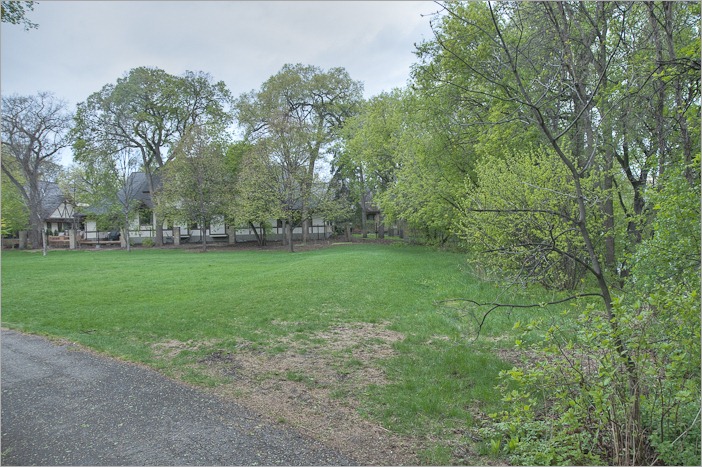 The picture is a little washed out, but that’s the way it comes out of the program without manipulation of any other controls.

Some will say that we have to do everything with Open Source programs, no fee asked for and free as a bird. Ok, there is also a free program to do the same thing. It is called QTPFSGUI. Talk about a name… 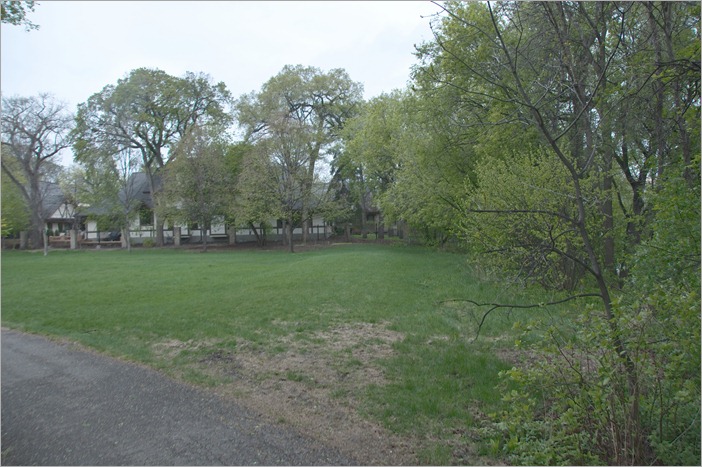 This is straight from the program without any controls touched except the “Next” and “Finish” buttons. As you can see there are some significant differences between these programs. The last one provides us with simple stacking of pictures without taking into account that the camera may have moved. So images are not really aligned and the trees (look at the top left) are somewhat unfocussed. Photomatix and Photoshop do the image aligning and a lot of other adjustments all by themselves. QTPFSGUI is also capable of having the images aligned, but you’ll have to align them yourself.

If we now manipulate the images with Lightroom, the pictures can become a lot more attractive. But that was not the exercise until now. 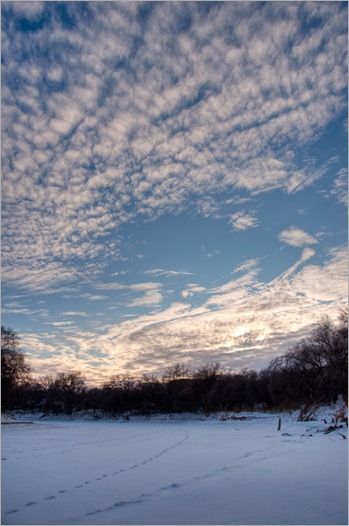 Highlighted sky and snow in the shadows

HDR to the rescue! I always try to make my HDR pictures look as natural as possible, the process involved called “Tone Mapping” is very sensitive and easily falls into the Grunge category. Not where I want my pictures. 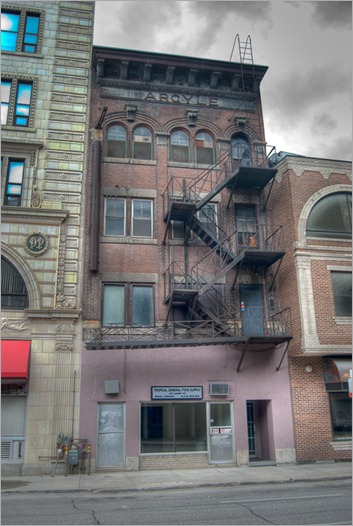 The picture of the Argyle building in Winnipeg was my very first tone-mapped HDR picture. As you can see, the detail in the sky is there, but not the color. The sky was light blue with some clouds. The result here is a brooding sky, not exactly how it was. The windows were also blown out and HDR also remedied that. Now it looks like the building next to this one has had a fire a few days before and the windows are burned black.

Enough said about the grungy part of these pictures, some like it, some don’t. I don’t. 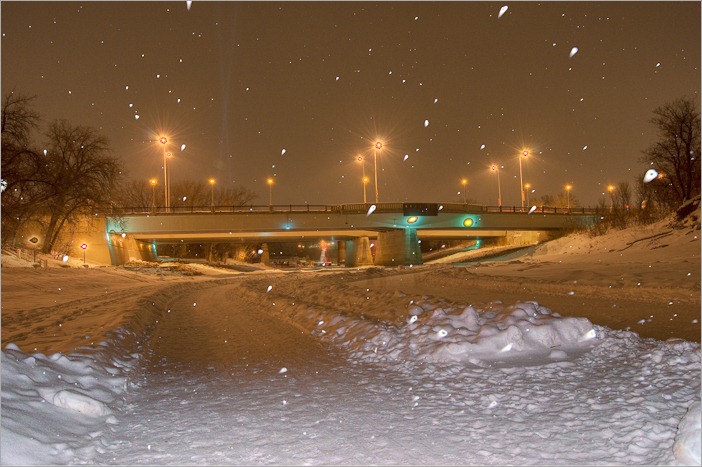 Even in the night we can have HDR effects. This shot on the Assiniboine is a combination of 3 pictures, of which one with the on-camera flash. Yes, I know the on-camera flash is horrible, but the effect is interesting. Now at least we can see the falling snow, something we would have missed in the rest of the pictures. In the central part of this picture you can see some “ghosts”, people walking by, outside the reach of the flash. 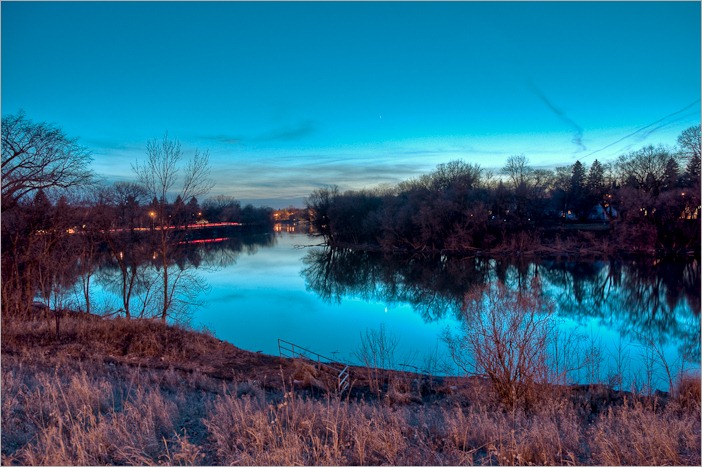 The above picture was shot using a tripod. Three exposures of 20, 10 and 30 seconds about 30 minutes after sunset. The foreground seems to have some colour trouble, but don’t forget that the “natural” lighting I got was far away sodium lights and that the grass in Winnipeg at that moment was brown from last year. Not much color to be had… Overall a nice picture. 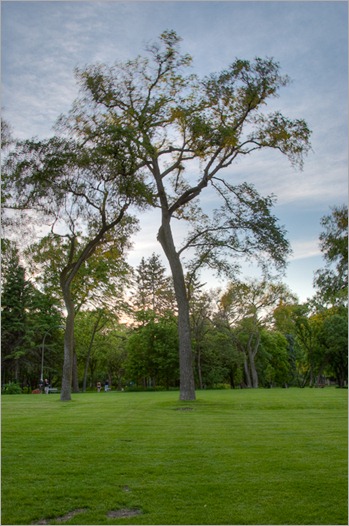 Oh, and before you start shooting bracketed pictures and use any program to create your HDR pictures, don’t forget one thing; you can shoot moving objects, but will have to use only one picture as a reference. Photoshop is then a must. However, if you are shooting trees like the one above, even with Photoshop this will be an endless task, There was enough wind to blow the leaves off and I would have had to “fix” every single branch. Didn’t do that, visibly. The result is a nice coloured picture, but with fluffy branches. Not exactly what you would expect.

So, HDR necessary? No, but it may come in handy sometimes. But once you touch the controls and go overboard with them, I think we should call these picture “artistic” but no longer call them photographs.

Just my point of view…