Ah, life at night. Some people say that night sees things that sunlight does not support… By that, they mean criminals, vampires, or things they do not like to see themselves. Let’s leave it at that, shall we? The night life I am talking about here is about light. Night light and lighting for photographs. Lots of times we see things in the evening or at night, even in the early morning before sunrise and we say to ourselves: “Wow, that would be a nice picture!”. So, if we have our camera with us (we always have it with us, right?) we prepare to take THE picture.

Comes next morning. What is this picture in my camera? I never took a picture like that? I must have been drunk!. Ok, scrap that last remark, none of my business.

Our first object of choice: The moon. Hmmm. if your moon pictures look like this one, 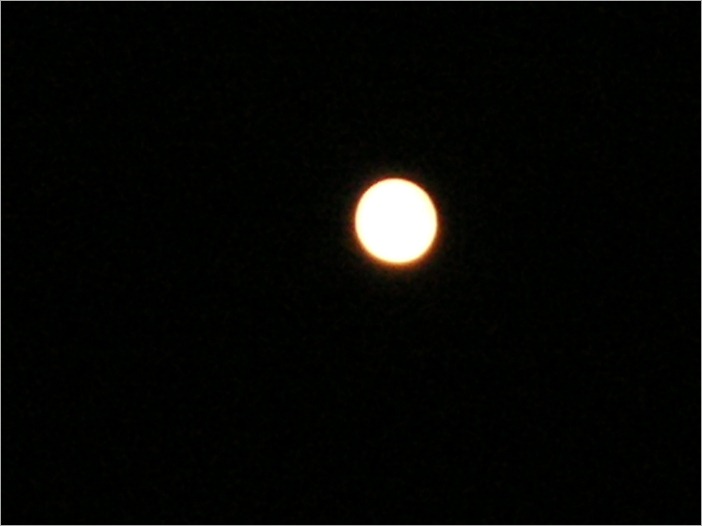 perhaps, you should take a look at another post of mine called Blue moon. Better pictures will follow immediately :-) . The next target of choice is the fire pit in the garden. “Nothing to it”, yeah, right. Except that you will have to have a very steady hand taking the picture. And around a fire pit we mostly have had something to eat or drink that makes the hands not as steady as we think they are. 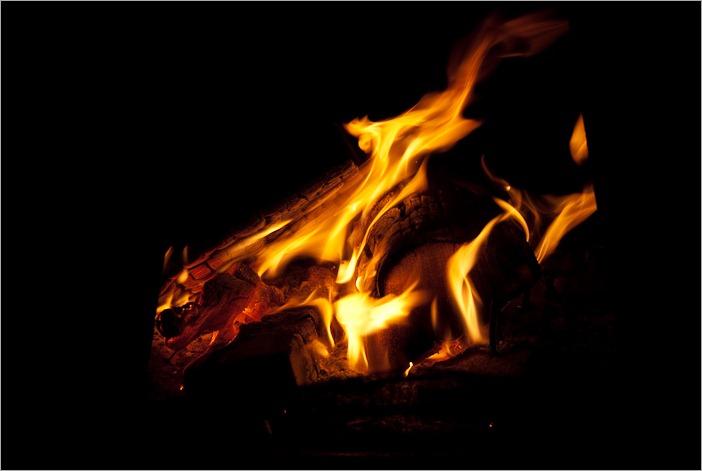 So, we take the fire pit and hope for the best.

Ok, enough talk about missed pictures, how do we do this right? Let’s see…

Night pictures need to be stable. therefore we need a tripod. The tripod should take care of most of our problems. However, if we have the possibility to trigger the camera without touching it, that would be even better. With the next shot I was lucky that I didn’t touch my drinks. It’s in Ukraine, Konotop to be exact where there is a monument of Lenin. That night it was very misty and I took this picture handheld. 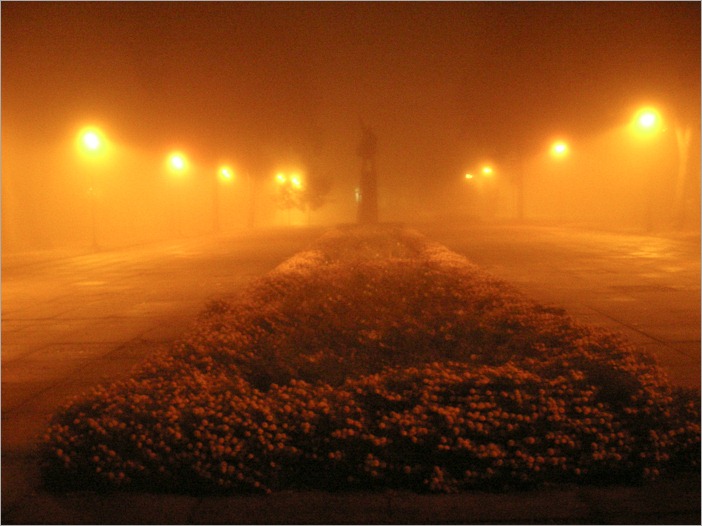 Lenin in the mist

At first sight this picture is perfect. Until you look closer and see that the camera moved anyway. Not too bad for a handheld picture at a 2s shutter speed. I thought that camera never stopped taking the picture! You can also see a fair amount of noise in the picture, ISO 200 on a P&S, what do you want. Normally that camera shoots at 50 ISO.

Another foggy night, this time with a DSLR and a tripod. You see the difference? 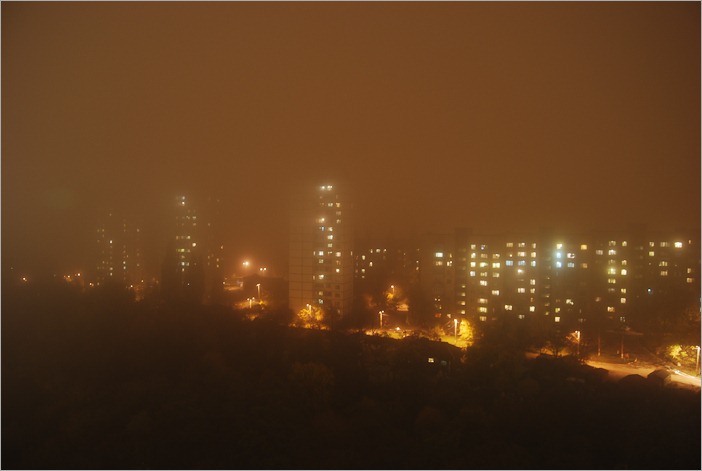 Kiev, Ukraine on a foggy night

Ok, not the best, but definitely better than the previous attempts. After a lot of other attempts, at last we get some results. Tripod, remote shutter control… Here’s the result. Christmas lights in a city called Leeuwarden in the north of Holland. 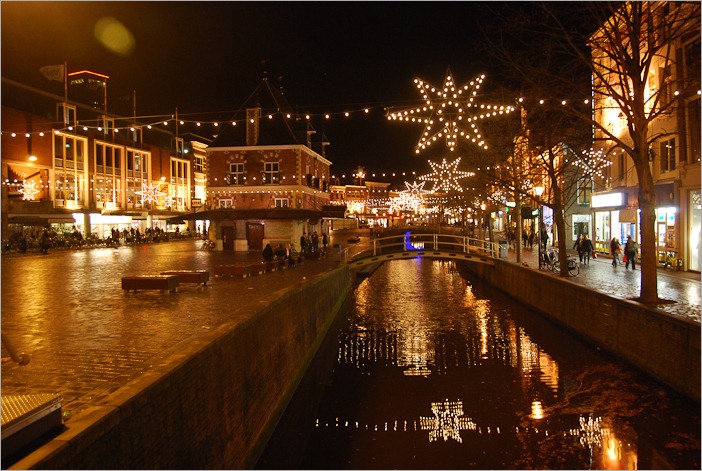 And still, something not completely right. What? Yes, the ISO was cranked up to 800 on a D40X. Not too high but noise is visible. Without a noise reduction function this picture would be horrible.

So we continue our voyage through nightly cities and try to find something interesting. Having lived in Paris for a few years, it may have put me off of taking pictures somewhere else. Not anymore! Since I saw the effort people put into Christmas lighting here in Winnipeg, I cannot keep myself from taking pictures.

On Mulvey and Harrow, there is one little house that is every year sparkling with lights. Now there’s a target for pictures. 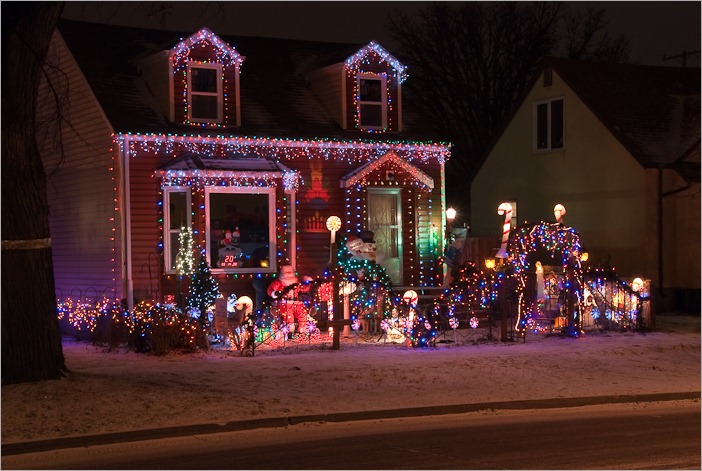 Of course here you must use your tripod, the smallest movement of the camera breaks the shot. This picture was taken with tripod, remote IR control and mirror lockup. Exposure 13s @ f/16, ISO 100. And as the counter in the window announces, 20 days before Christmas. Yes, 2 days before I broke my beloved D40X.

The latest night picture I have is a handheld, with my new Nikon D90 and this is taken on Vaughn street, in downtown Winnipeg. 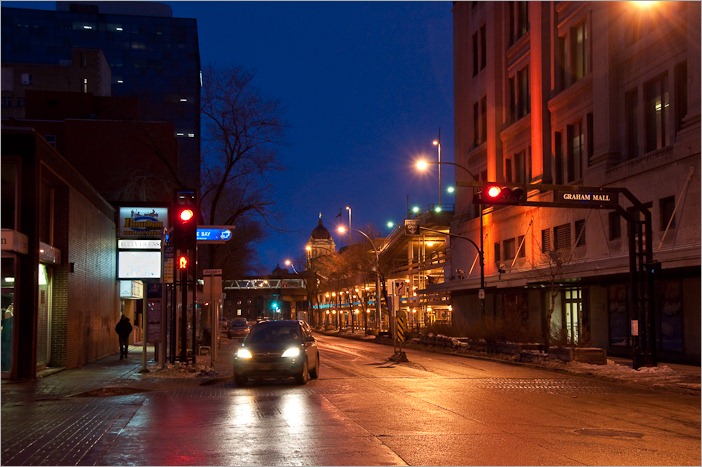 And again handheld. Apparently the tripod stays at home too much. Probably because lugging it around for a whole day and using it for a few night shots is too much. I’ll have to get used to it though. Without it, little chance to get good or even decent pictures.

The next picture was taken in Munson Park, not far from my house. This time with a tripod, and some patience. 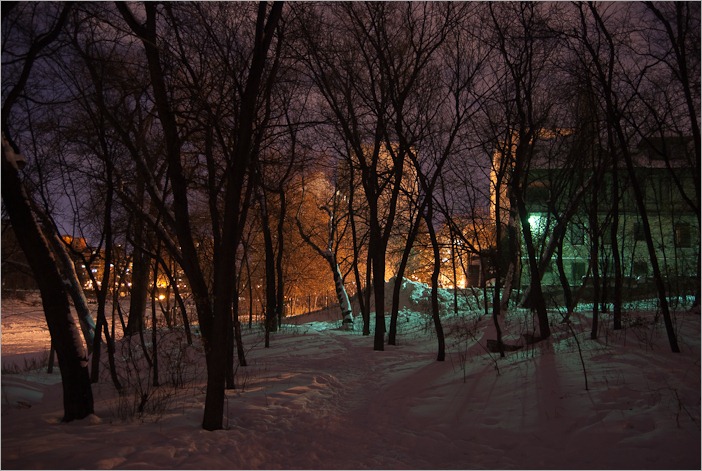 I know all these good night pictures exist and they must be taken. Preferably by me ;-) So one of these days I will be shopping for a lighter but also stable tripod that I can take with me everywhere. Not the small rickety things they sell for 20$… Those are good for P&S stands, not for a DSLR, no, a real tripod, light and handy.