A tale of mystery and imagination

In the Assiniboine Park people have been known to tell strange stories. Some of them true, some not. A few days ago we tried to check up on one of those stories. The gate below is one of those mysteries. It seems this little pergola is a portal to warm climates and old times. 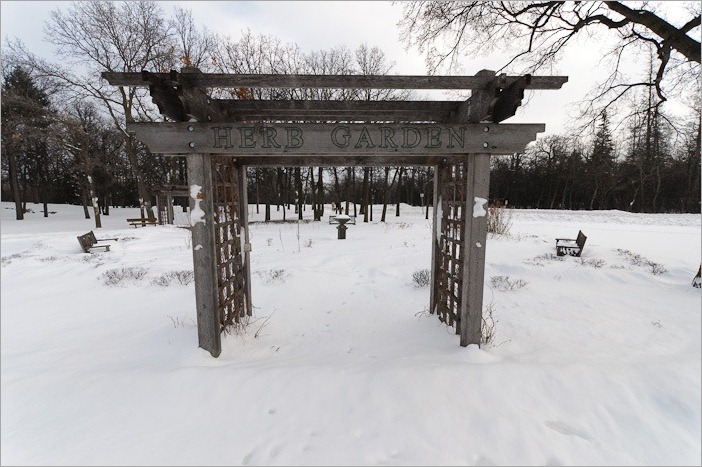 You imagine that this is again a story about snow and about how I like winter. Not exactly so. Stepping through this portal in the Assiniboine Park, the environment is totally changed to a tropical forest. You don’t believe me? Come on in! All of the following images have been taken mere minutes from each other.

As soon as we stepped through this seemingly uninteresting pergola our environment changed. It expanded, retracted and changed completely. The temperature and most certainly the humidity were pushed  to the limits. My camera needed at least 5 minutes to recover from this shock. We had entered a completely different universe.

Keeping on our winter coats handicapped us a bit. I, for myself, was almost immediately transformed into a fountain. Happily I had a small towel with me. My wife kept my scarf and fur hat, while I took the following pictures. 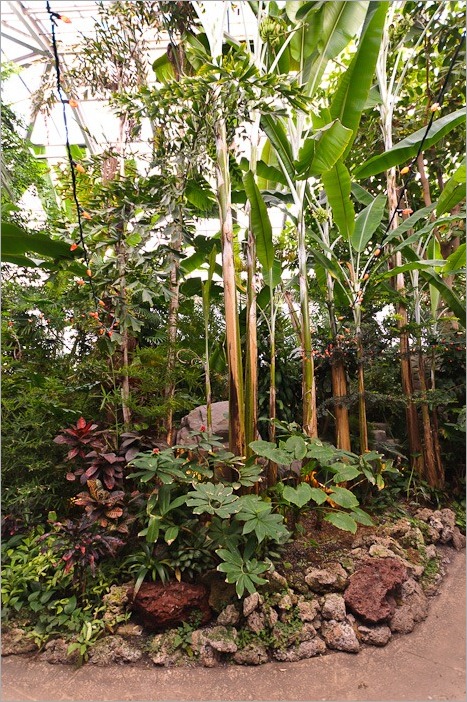 The aroma of flowers and plants was almost overpowering, after having been used to the clean, frozen air on the other side of the portal for already so long. 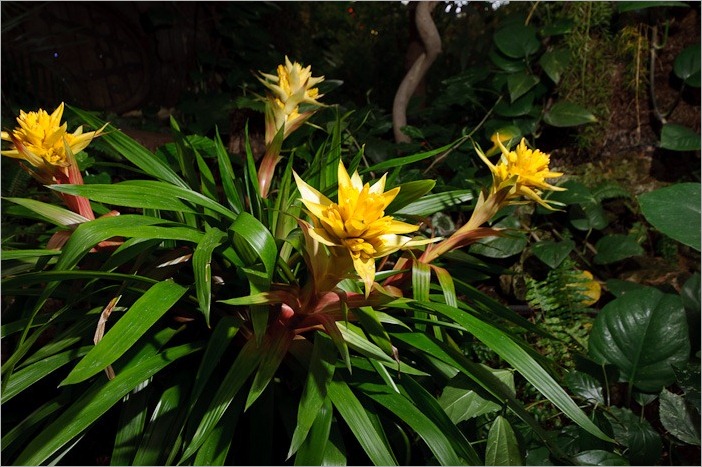 The green view of all the plants and trees seemed to be out of this world. I am usually very sceptical about magic but here it was… magic. 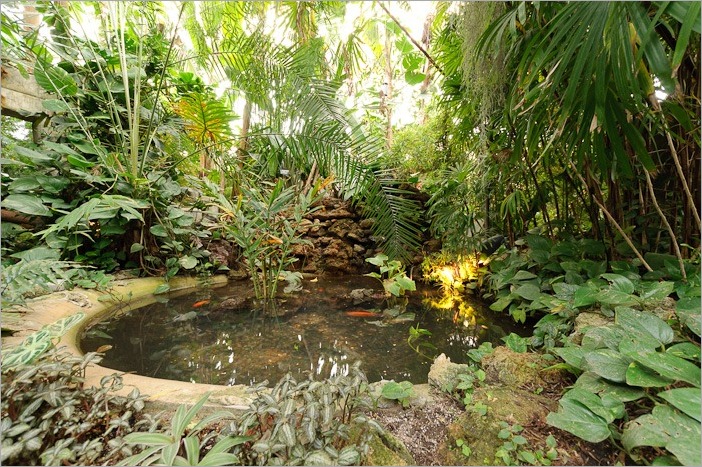 Fish ponds, while on the other side of the portal the temperatures were far below zero, flowers in wintertime. This was a place where I could stay longer… 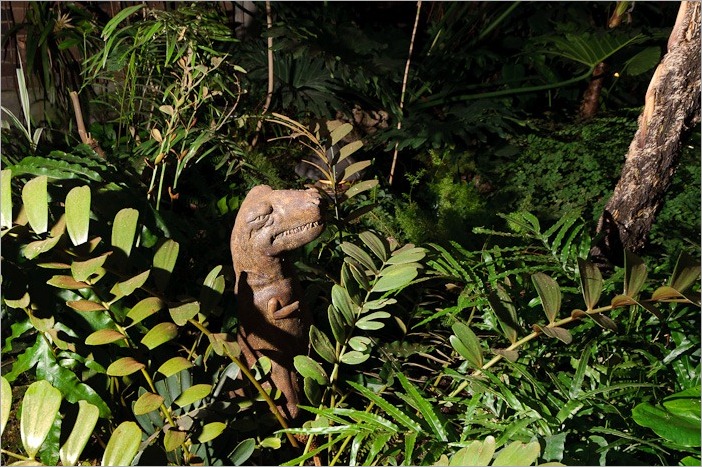 Hmmm, am I dreaming?

This universe was inhabited by dinosaurs and other magical creatures. Nothing you could see outside of the portal would have prepared you for what was here. 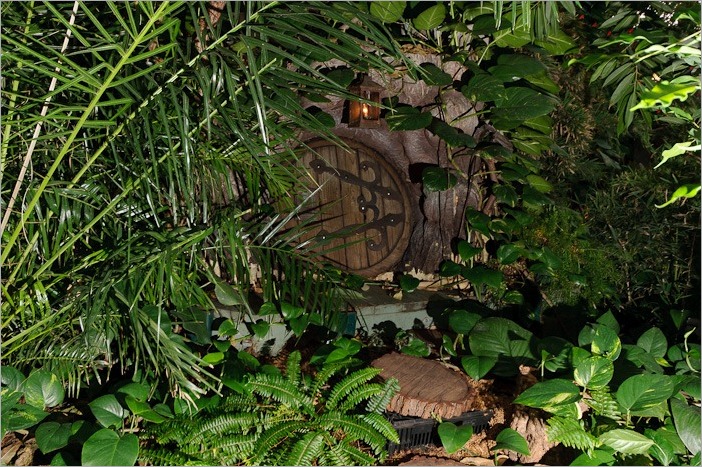 Half concealed entry to a troll house

At some point there were even trolls or other small creatures living and doing their laundry… (huh?) 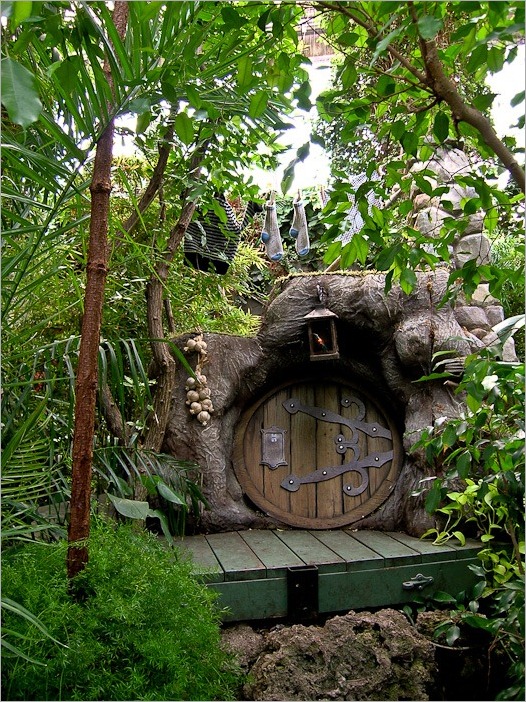 Clean creatures, for sure!

So we stayed here, warming up our frozen bones, taking as many pictures as possible. Everything was warm and inviting. However we were conscious not to touch anything. It seemed a well-taken-care-of place and cutting or even touching plants or flowers would, I am sure, have called the wrath of the caretakers of this place upon us, wherever they were. No need to take risks. 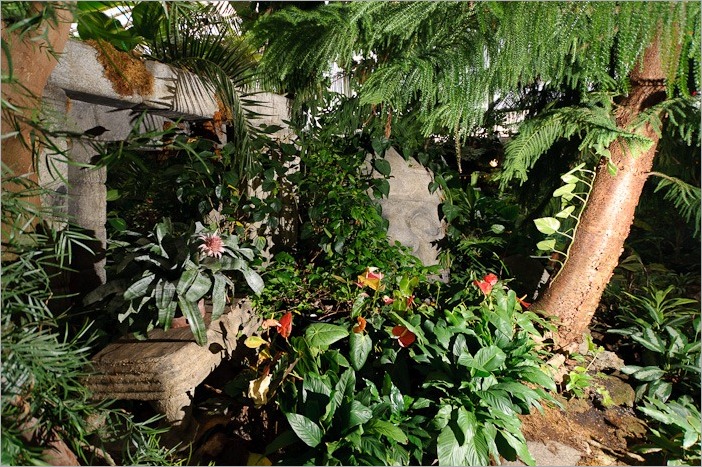 Some Aztec rock sculpture looming though the greenery

At some place it looked as if we were somewhere in the tropics of South America with an Aztec or Mayan sculpture lurking at us through the bushes. I didn’t get a too close a look at this, the camera was shaking too much. I wasn’t, I am never afraid of anything. 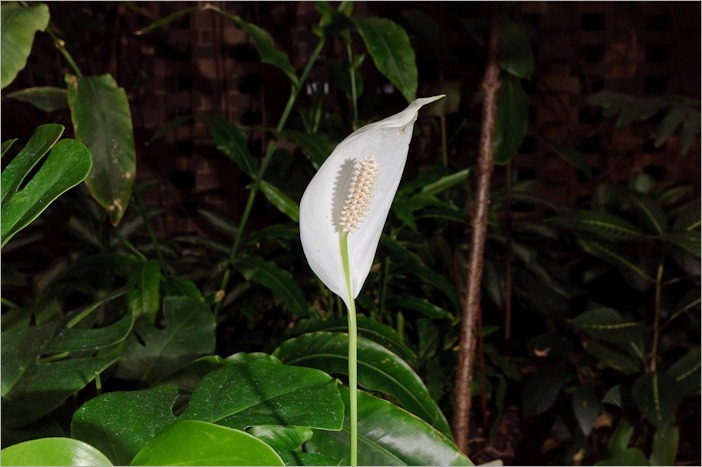 Unknown flower or unknown plant? Unknown for sure.

After a walking for while, we came to a place where the plants looked very familiar to what I used to see near Christmas time in Holland. These plants were called Christmas Stars. I believe they are called Poinsettia in English. 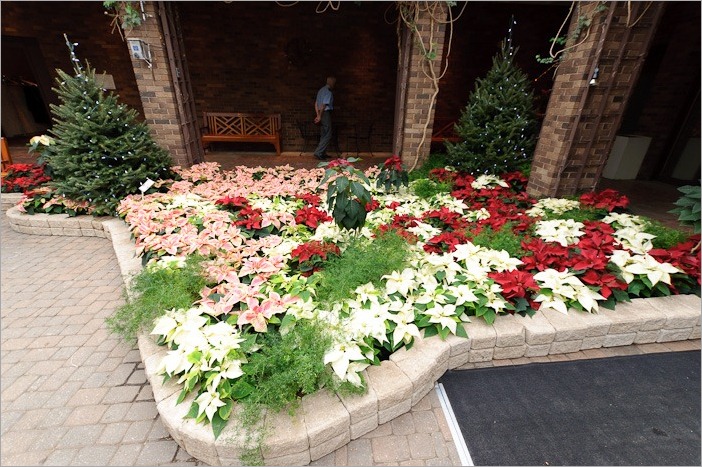 The place looked well kept and other people scurried along the sides. Perhaps they didn’t want to be seen or addressed. We obliged. Never spoke a word.

Then, another portal-like structure showed itself. Before I could take a picture of it on the warm side, we were transported on the other side of it. Back into the cold. 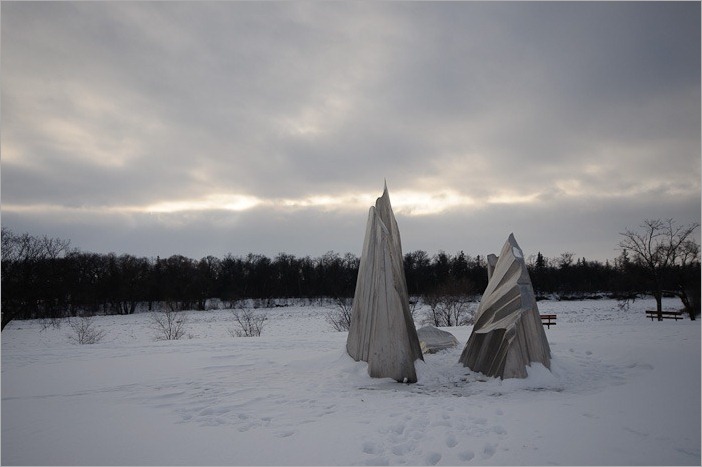 The other side of the portal

As you can see, this is near the Assiniboine river. In some way, we had crossed the river inside the tropics. Or was it just a fish pond?

We tried to get back through it, but the structure simply seemed to be “normal” and we kept walking in the snow. Now how is this for a Sunday afternoon experience?