Yeah, so we were told

. Ded Moroz did a good job over here. Everything was covered in snow overnight. Since then, there has been no way back. Temperatures refuse to move upwards again. 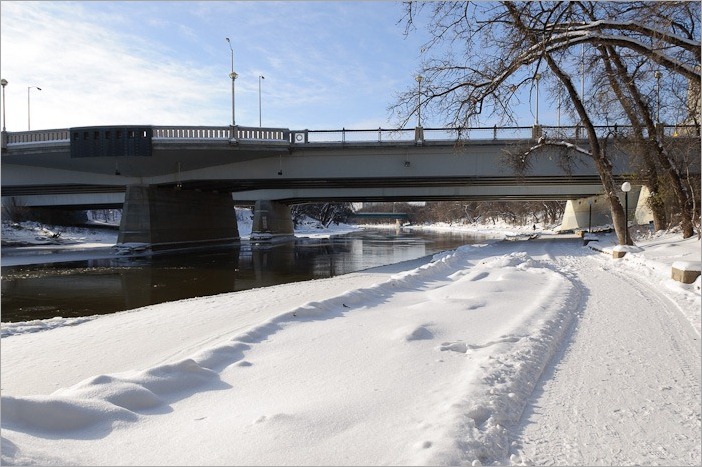 Winter in Winnipeg seems to be horror for most of the world, except for the people in Winnipeg. You can shiver over temperatures of –20C, but if you dress well, there are lots of photo ops that do not present themselves anywhere else in the world.

That’s why I love Winnipeg. Being from Holland, I grew up with lukewarm summers, mostly wet; and with chilly winters, not cold enough to be called winters.

Then I went to Ukraine and thought of the famous Russian Winters with 2 meters of snow, troikas sliding through the streets, you get the picture. I lived in Ukraine on and off for about six years. Never a winter to speak of!

Then I went to Winnipeg, in March 2008. After a voyage full of delays I finally arrived at the airport. Overheated from the trip, outside I simply opened my coat. My friend asked what I was doing… I was just steaming in the –17C at midnight 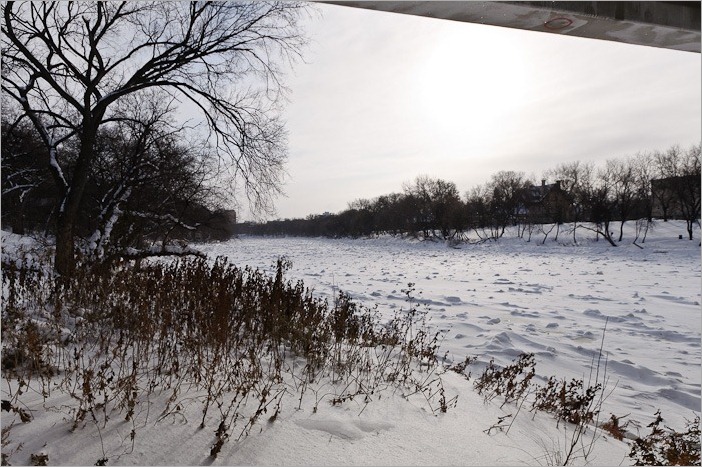 Rivers frozen and snowed over

It’s true that after five or six months of cold and snow you want something else, but during the winter, I feel great.

So, here are the pictures of a great season in Winnipeg. If they look too cold for you, just sit back in your chair and sip that beer of yours, enjoying the evening sun. 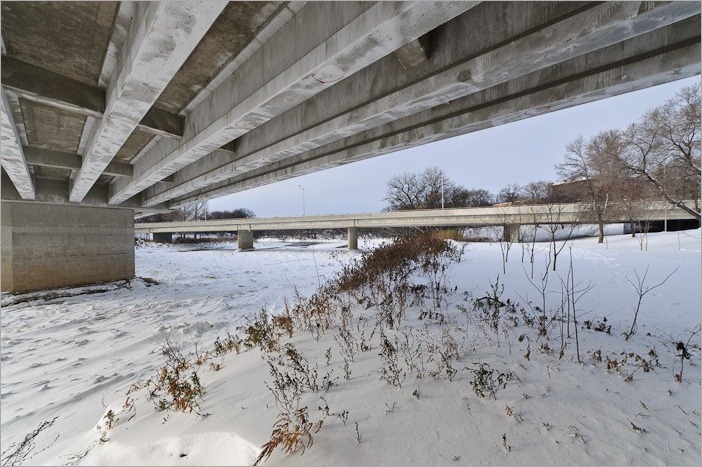 Bridges trapped in the ice

We do that here too, although it’s mostly with coffee. Beer might freeze before we get to the end of it.

The Assiniboine river is now a bit lower, I wrote about the water level a few weeks ago. Now that no new water is being poured into it, the level goes down. We’ll have to see coming spring what kind of surprises we’ll get. 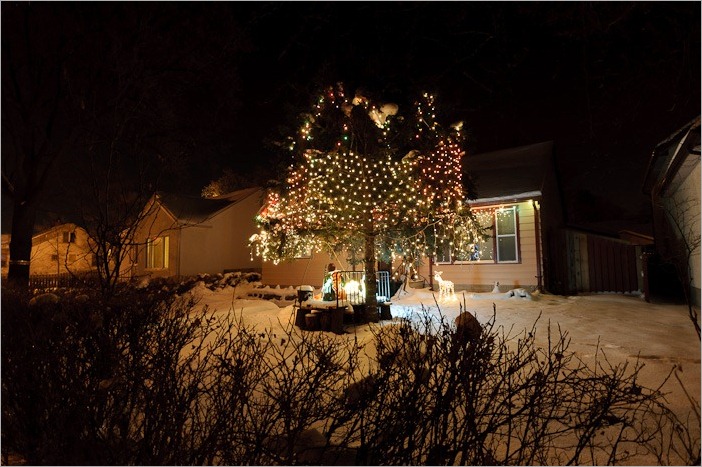 Christmas lighting with the trees at hand, no import here

Wintertime in Winnipeg is also the time for people to show the Christmas lighting.

Some do that in a more extravagant way like this house. 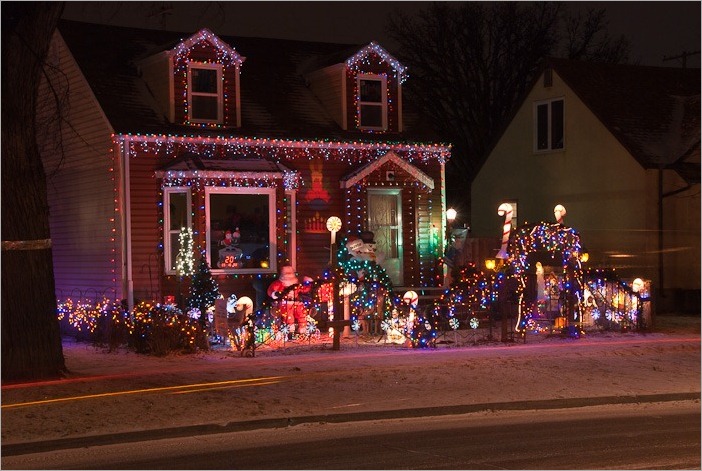 A bit over the top, but great to look at

By the time you get the pictures, well, you don’t notice the cold anymore. The only thing you have to be careful about is bringing your camera back into the house. Condensation may announce the end of your camera.

In winter, I take out the memory card from my camera outside. Then leave the camera in the bag to warm up gradually. Unless of course the nice sunshine outside calls again. 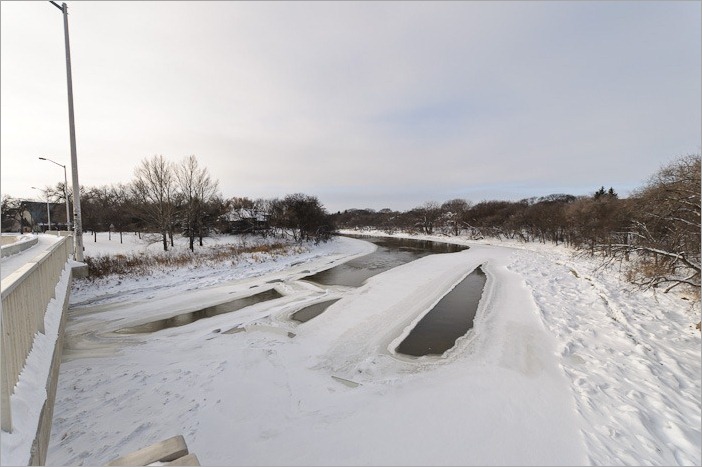 Another thought is your batteries. You will want to keep them warm and keep an extra one on your person in a warm spot. You never know when they give up.

But as I already said, nothing compares to the cold winter in Winnipeg, photo opportunities are legion, you just have to get dressed and get out. 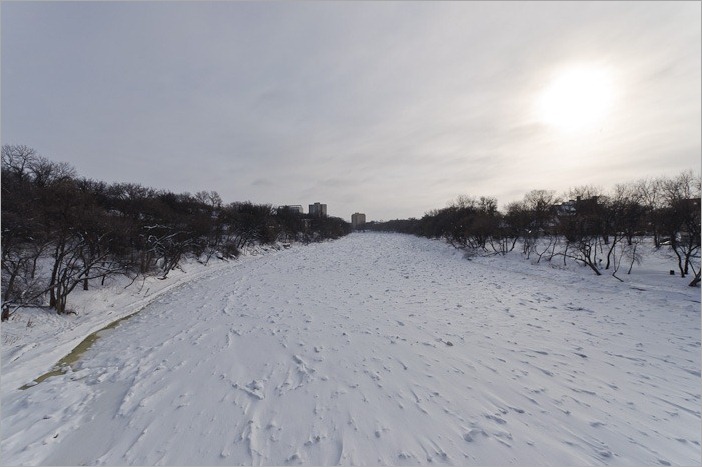 Cold and for now uninviting

And when you get back after a long walk through the afternoon and the evening, you should not forget to take a picture close to your home. 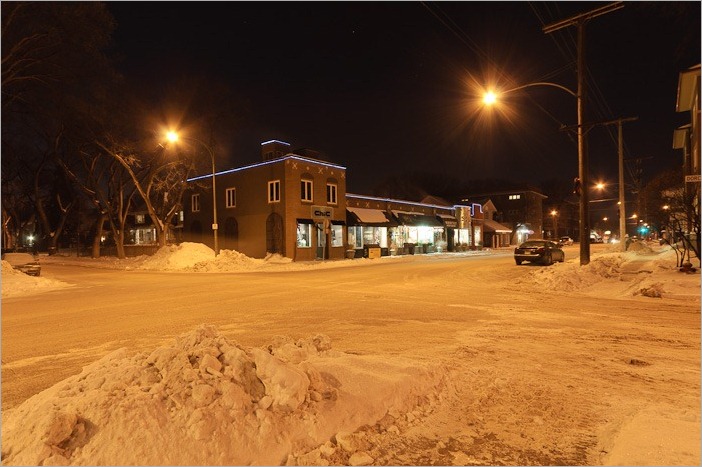 Sodium lights… give a nice view

Even there, the beauty of the light may be enough to give you a nice picture. Often you don’t have to walk a long way to get pictures, close to your house there may even be more to find. The above picture is 50m away from my home, on Lilac and Dorchester. If you look well, you can even see some stars. 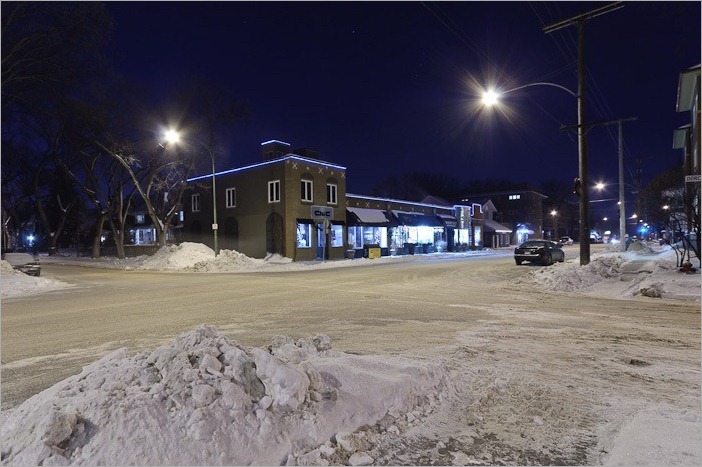 Out with the sodium color cast

The color “corrected” version might give you back your original idea of Winnipeg, though. Corrected it looks a lot colder than it was in reality.

As you can see, low temperatures don’t keep me or anyone else in Winnipeg from going outside. Pictures galore

! Ded Moroz can bring on more cold and snow. You may have guessed that “Ded Moroz” is the Russian version of “Grandfather Winter” or “Santa Claus”…

So, now that I have shown some of my own pictures, show me yours! Give a link to your photo gallery in the comments! Everything is welcome (except spam… that will be filtered out)