White, white everywhere. The wonderful part of it is that it is new. After six months of white snow and blue skies you will be hoping for something else. 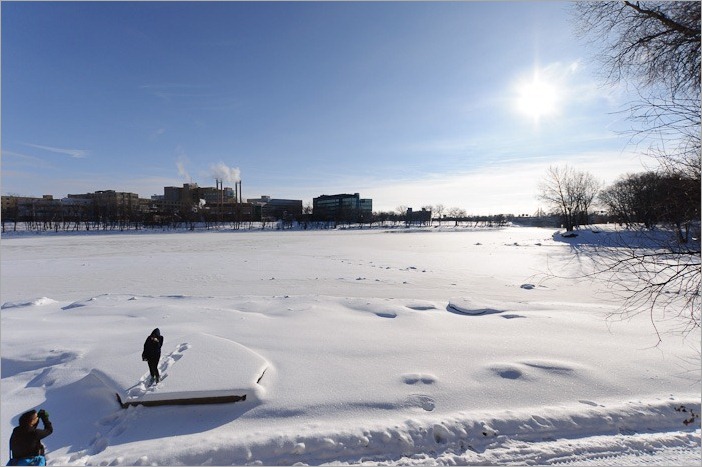 Something green and times that you can dress for temperatures above –20C… But at this time of the year it is still Winter Wonderland. What strikes me is that in Holland, when it has been snowing (enough) many of the kids play in the snow, here in Winnipeg… none. Perhaps virtual life is more interesting.

How does a city cope with all that white stuff? Well, let’s take a look. Here in Winnipeg, people drive more carefully in snow. They also have the (law enforced…) habit of putting all-season tires or winter tires on their cars. No use of transforming your car into a winterfair kart. 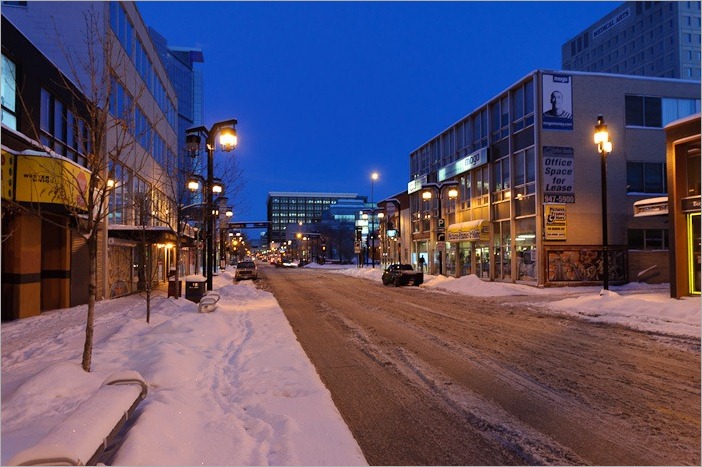 Downtown Winnipeg, just before the ploughs clean the roads

Downtown Winnipeg is cleaned from snow during the night. In the morning, cars can move around freely. Pedestrians have a little more trouble. But then again, who is foolish enough to go out in the city on foot by temperatures of –15C ? Photographers, probably

. In my spare time I like to call myself that, photographer, not foolish. 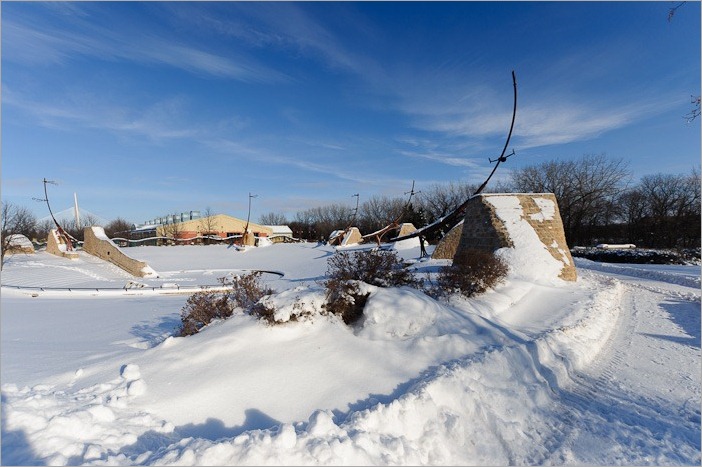 So, downtown Winnipeg, The Forks, Main Street, Exchange District, all places where there is lots to see and to photograph.

I went there again today to take more pictures. The sunny weather didn’t hold up very long so I didn’t get many pictures. I try to compose my pictures in-camera. The only cropping I do afterwards is because my horizon is not always as straight as it should be. That way of working gives me less pictures, but hopefully of better quality. More “keepers” this way. 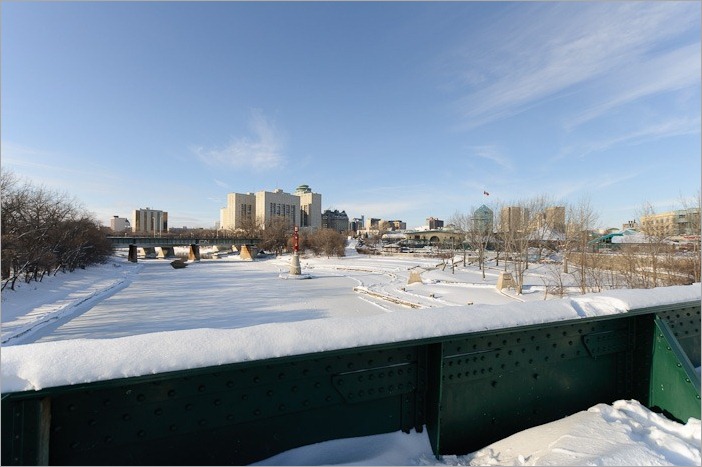 The last meters of the life of the Assiniboine River

Those now familiar with my surroundings, will recognize The Forks in this picture. Already the river looks frozen and flat. Look a little closer under the first bridge and you will see that there is still open water flowing. 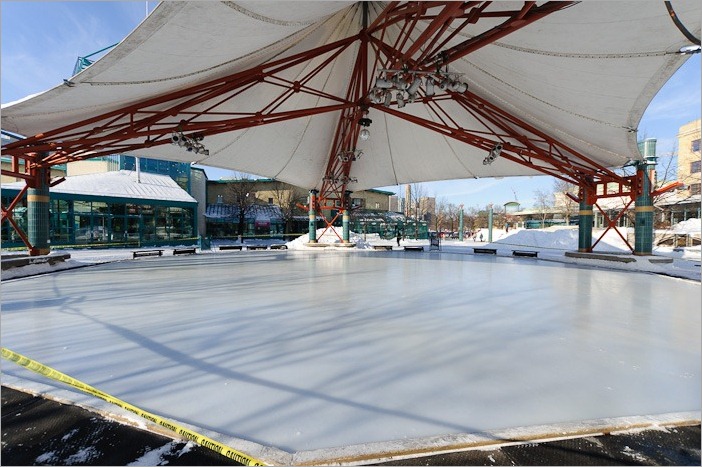 Skating rink for young and old

At The Forks, the only place where it will be safe skating right from the start is the skating rink. They flooded it last night and today it was still freezing up. Even the water hoses were still lying around… In a few days this fine layer of ice will welcome the first skaters of the season on naturally frozen ice. 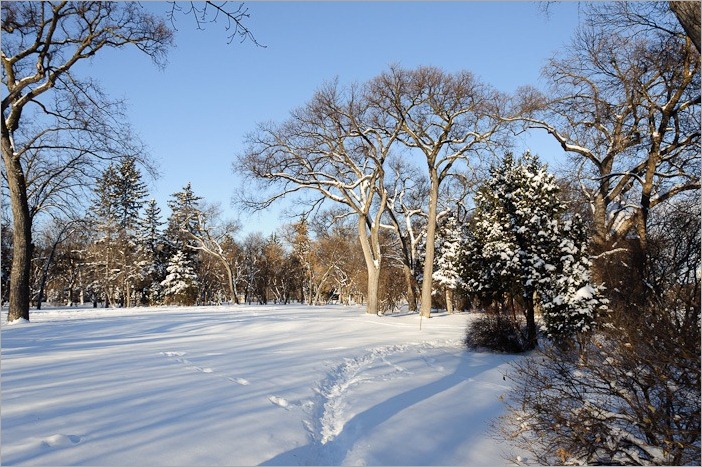 There are also fairy tale like pictures like this one in Munson Park. Easy enough to take and always a good result. As a result of this “ease” you can see a LOT of nice spruce trees covered in snow on Flickr like here, here and here. I’ll try not to give you an overdose of white spruce this winter, even if they stay very photogenic.

The white stuff also gives very nice night photography opportunities. Instead of big dark zones in your pictures you can get a well lit picture. In other words, nature’s own reflector for your personal pictures. How about that? 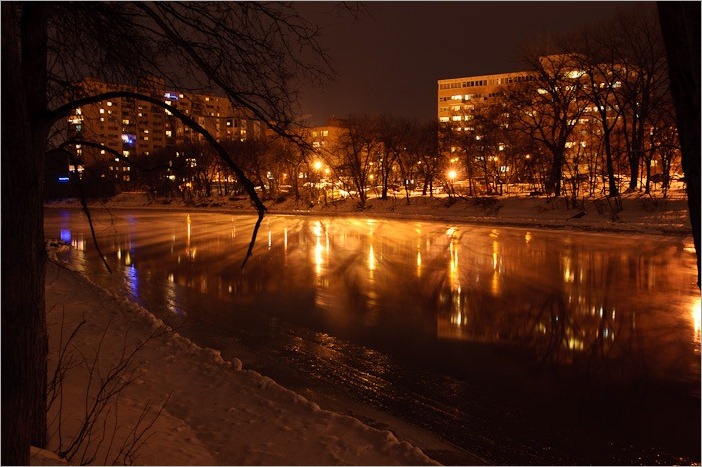 Assiniboine, resisting freezing over, but losing the battle for the season

The Assiniboine, not yet completely frozen was giving some mist a few nights ago. It seems that the water is still warmer than the air above it. Hmmm, come to think of it, that looks logical. The water is still flowing while we were freezing our fingers off in
–18C… No wonder there was fog. 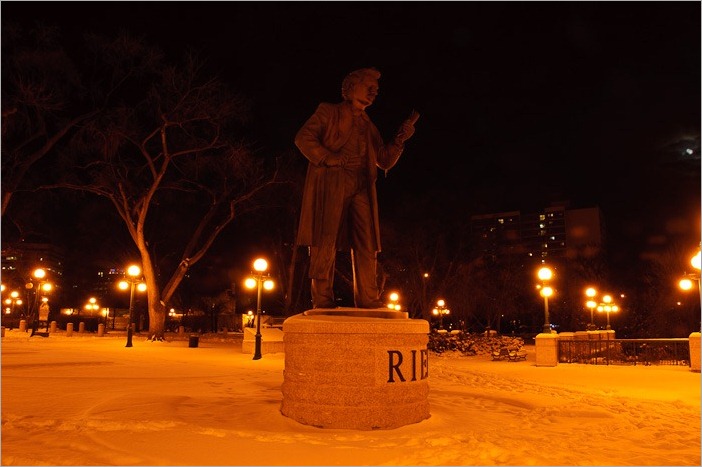 The natural reflector comes in handy in many cases. Of course the tripod is also part of the material to lug around. The above picture was taken with a 4.0s shutter speed. No way that I could hold the camera still that long in this cold. 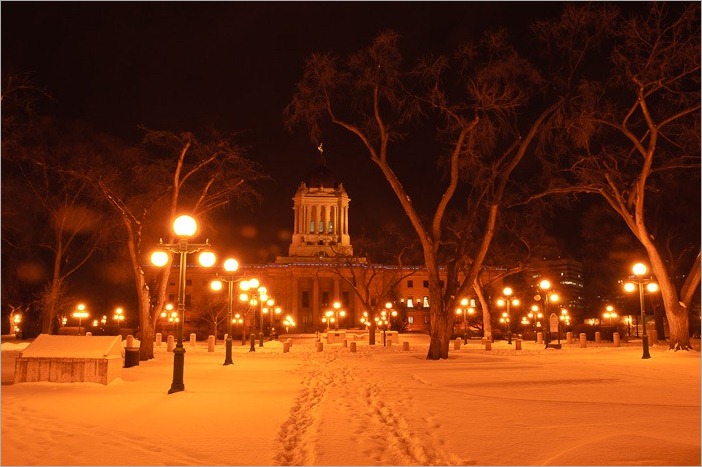 Looking beyond Louis Riel, founding father of Manitoba, is the Manitoba Legislature. With all the lights on, the snow acts as the huge reflector you need to get this picture. For those who don’t like the orange colour cast, well, this was actually what it was like. Removing it gives the picture a really cold aspect, colder than the –18C it was.

And while you are reading this story, the ice is building up in the Assiniboine. Slowly but surely it draws its plans… for a good ice floor. 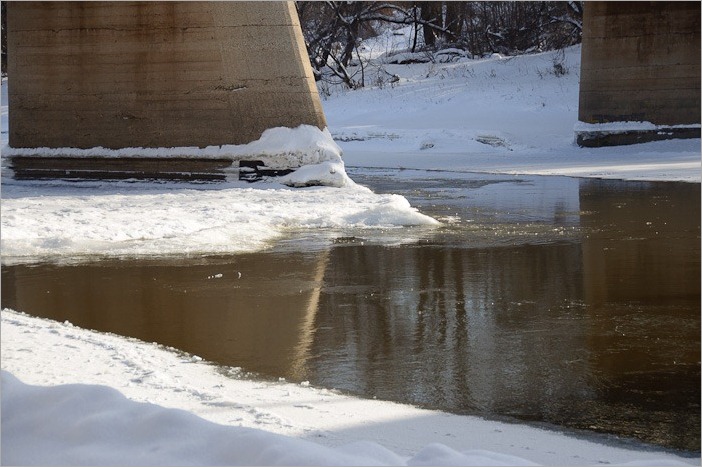 Soon enough there will be a skating rink here

The Assiniboine is not deep, but all year 2010, the water level has been very high. I don’t know what the ice quality this year will be. I’d like to buy myself some skates, with a straight blade for higher speed and lighter skating. I will need a flat skating rink for this, long enough to stretch my legs.