A little walk in the park

As a kid, I never wanted to go to “the park”. Nothing could bore me more than feeding these ducks that never came close enough to catch. Then there was the “sitting on the bench” to rest… I didn’t want to rest, I wanted them ducks. 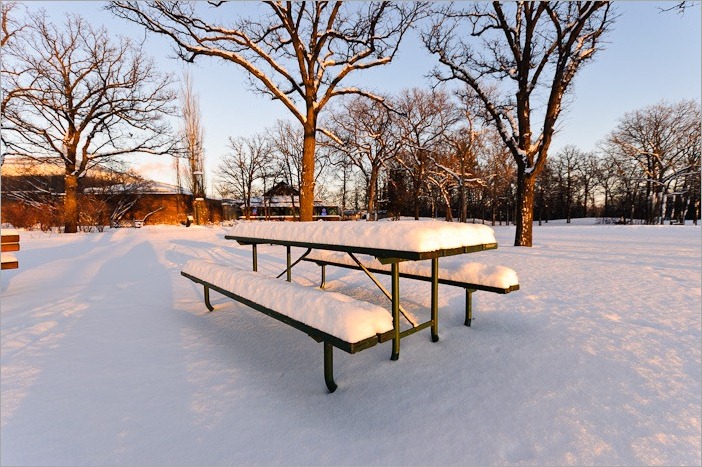 Ever since then, I haven’t had much interest in parks and have preferred wide open nature, mountains, sea, you name it. But here in Winnipeg, even empty parks can give nice photo opportunities. Take a look and you’ll find out.

The Assiniboine Park is one of the older parks in the city of Winnipeg. It stretches along the Assiniboine River and holds the Assiniboine Zoo, a Conservatory, a band shell, a cricket field, as well as the English Garden. The rest of it is playground, picnic areas and forest. 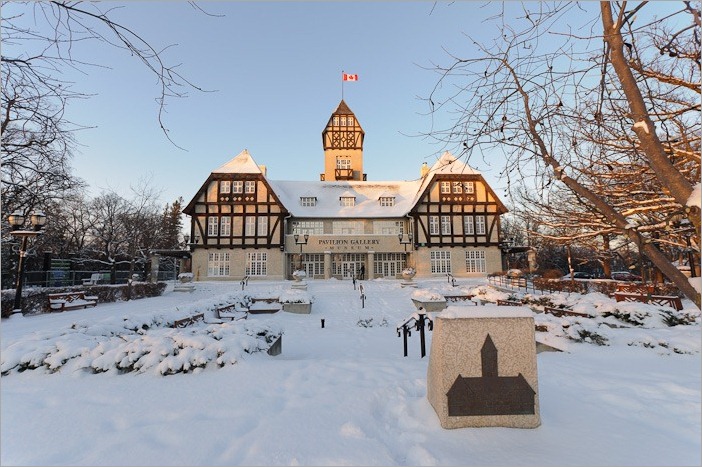 Today, no cricket games and no walks inside the Conservatory. Just staying outside. We just had had 2 days of nearly continuous snow coming down, so a walk in the park was interesting.

There is nothing less forgiving than pure white snow in the midday sun. So we decided to leave a little later and catch the rays of the Golden Hours. 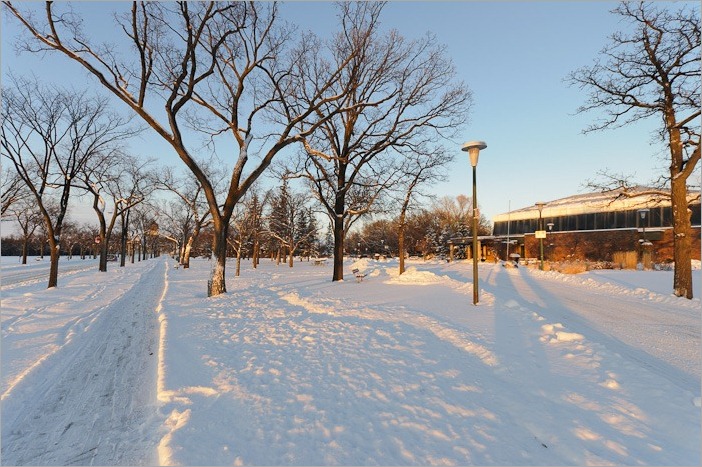 Not that we caught many of them, as soon as the sun set it became rather fresh. We left home by –10C, but by the time we left the park –16C was not far away. With the wind it seemed even colder. 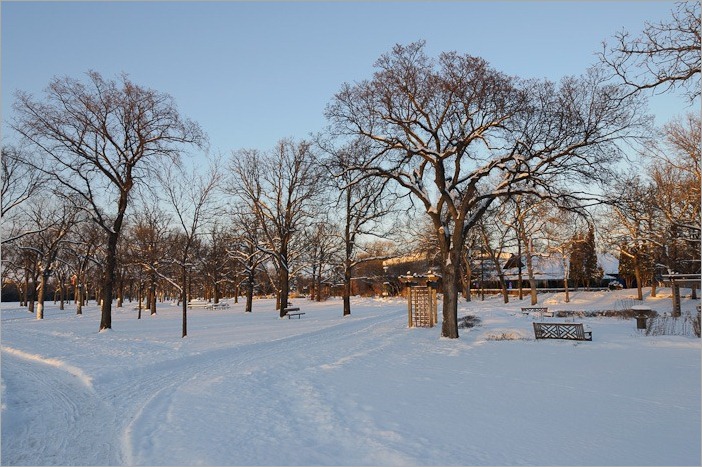 Beneath the snow there is a herb garden. There are chives and all kinds of other kitchen and medicinal herbs there. We’ll have to wait until next spring to see some of it again. It is well kept, so no reason to doubt it will be there again. 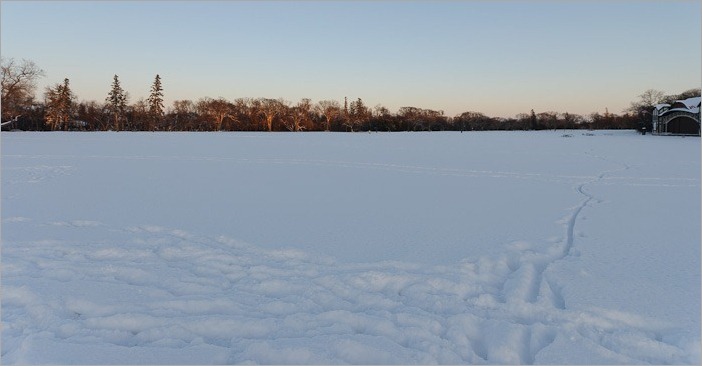 On the extreme right, you see the Band Shell. It is called “The Lyric” and holds artists and musicians in summer. Now it’s closed and the huge field in front of it will soon be crisscrossed by ski trails. For now it looks nice and empty. Clean as always, you will find not garbage lying around on this field… 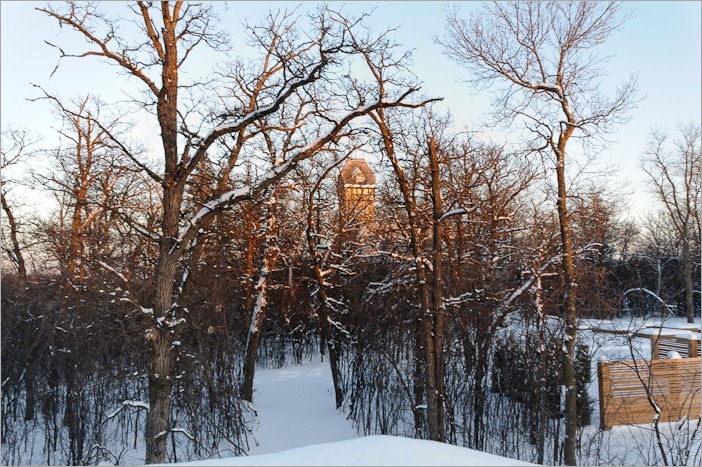 Going up the new hill there was a nice view of the pavilion in the setting sun. The hill is new, as well as all kinds of playground stuff for kids. The works are not finished yet, they’ll continue next spring. 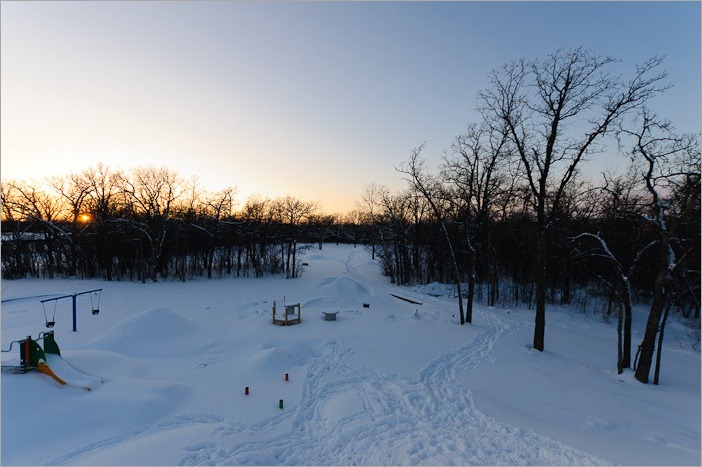 Quick view against the setting sun

Looking the other way on the same hill, the setting sun through the trees made for some nice lighting of the kids’ playground. I don’t know if they’ll be using it soon, though. 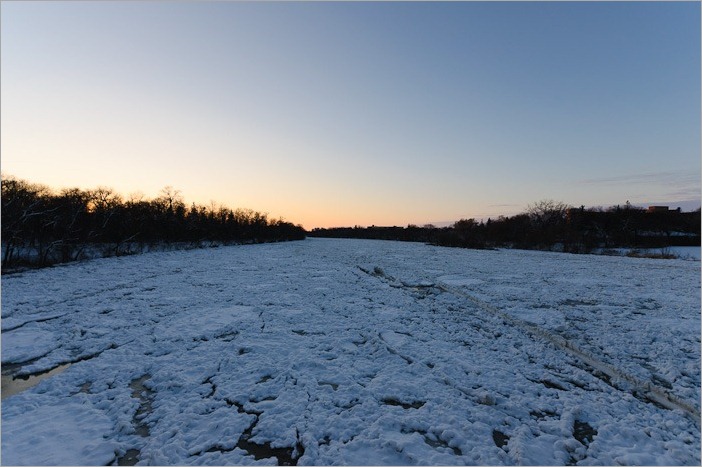 Then we were cold enough to be ready to go home. A quick walk over the footbridge showed us the Assiniboine, full of snowy ice and really not trustworthy to go and skate on. I have no idea if there will be a skating rink this year. I said the same thing last year too, and the city managed to create 7km of it on the ice on the rivers. Ice I would not have believed to be flat enough. So I’m not forecasting anything yet, until I see it.

And you already know, once I see something here in Winnipeg, you’ll be seeing it too, here on this blog.