Sometimes we think that living in the city is the worst you can think of. All concrete around you, cars and exhaust fumes. Noise and unpleasant smells. Often enough we are right. All of this applies to cities where the management has never thought of creating (enough) green zones. 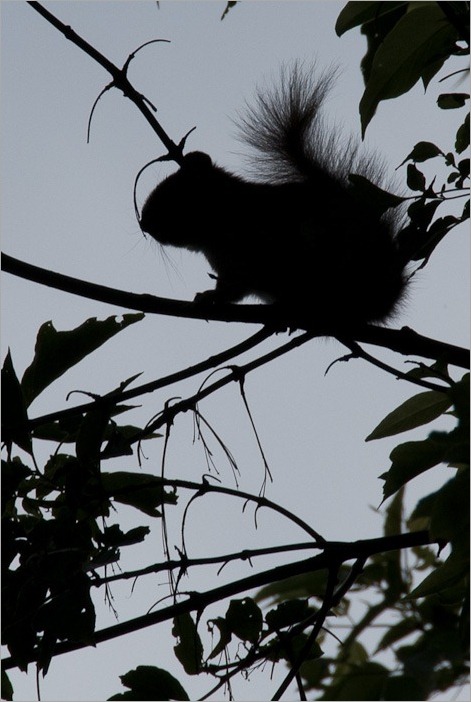 The city of Winnipeg has been created with green zones, parks and gardens since the late 1920s. So, let’s take a look at one of the parks that is closest to my house. I guess I already blogged about this one, but since I go there nearly every day, there is always something new to observe.

By now you may know that I have acquired a new lens, a Sigma 10-20mm Ultra Wide Angle or UWA. So what was my first thought once I had this beauty in my possession? Go out and shoot! The only unforeseen factor here is obviously the weather. A drab grey week with hardly a nice enough temperature to get out and shoot. 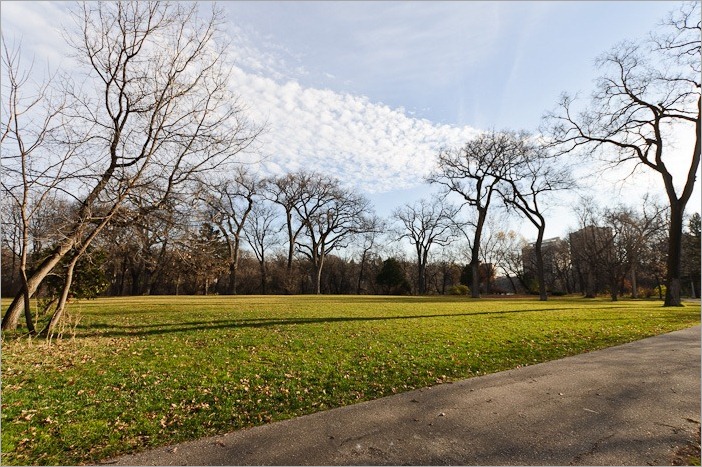 An autumn morning in Munson Park

So I decided to show you a bit more of Munson Park and its inhabitants, fresh pictures and some older ones mixed together.

Munson Park, as you may know, was private property of John Henry Munson and later of the Richardson family. It was then donated to the City of Winnipeg who is taking care of it now. It has also become a public park instead of a private garden. All the better for the photographers, children, lovers and squirrels. Although the last ones would probably have preferred everyone to stay away. 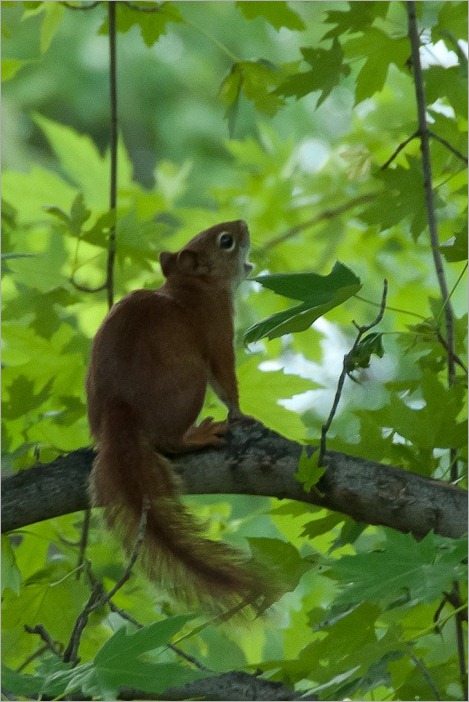 Singing or simply complaining about the photographer?

There are two kinds of easily recognisable squirrels in Winnipeg. Grey and red/orange squirrels. The grey squirrels are not easily approached and even harder to photograph. The red ones are mostly chirping at you if you come too close. 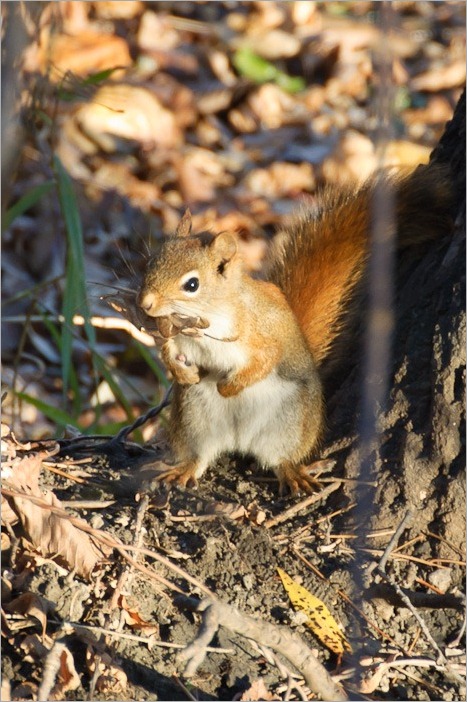 I can box you if you dare!

They may even take threatening a pose if they think they can win. The one above is seemingly thinking she can take out the 100kg photographer all by boxing him. I chose not to challenge her, I might have lost, who knows? 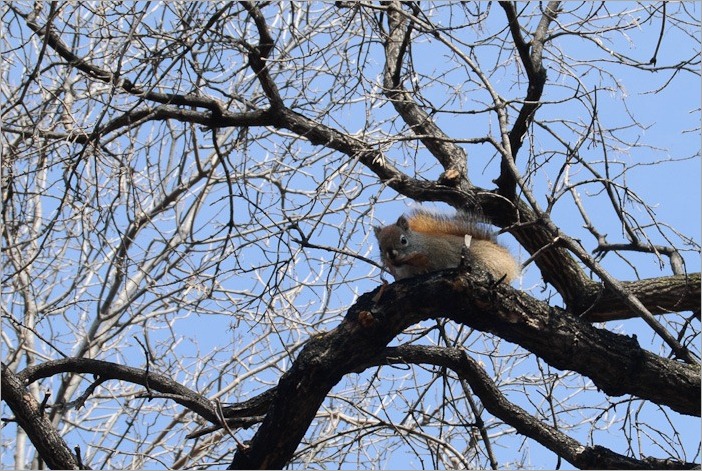 From high up and from safety

More likely you are being scolded from high up. People walking here with dogs mostly get that treatment. But only from the red squirrels, the grey ones stay mostly out of sight. Where there are at first grey squirrels and later arrive the red ones, the red ones are to stay, the grey move on.

But whatever color they have, they stay a nice subject for photos. Even more if you happen to have some nuts in your pockets. They might even pose for you as a thank-you. 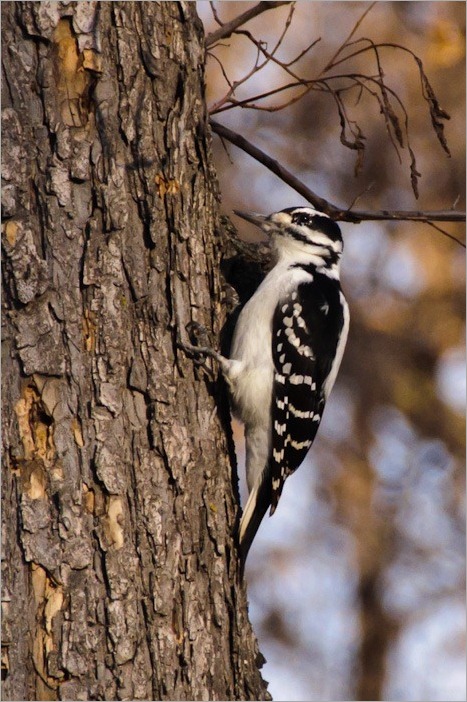 Other creatures don’t care for nuts and prefer to search for their own food. They also make for nice subjects, but are less easy to catch. It’s not often I can catch birds like this one, with my size, the birds are gone even before I have spotted them. Pity but true.

That leaves me with the plants and flowers. Well weeds, mostly. 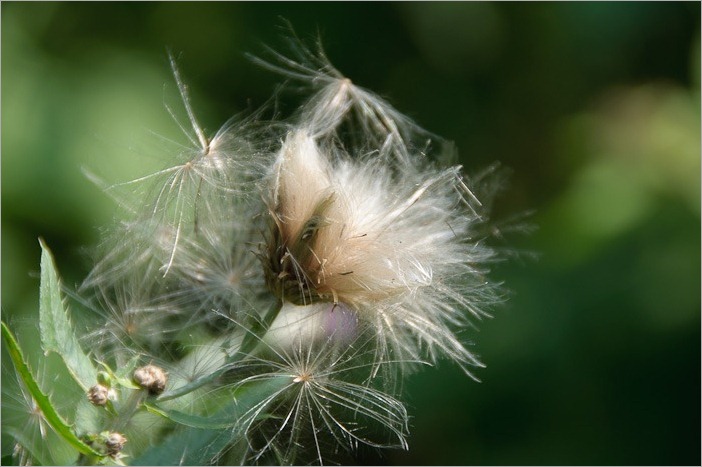 A little bit of flash

When taking weeds like these, one of the nice things is that they light up completely if you add a little bit of speedlight to it. My SB600 does that trick very well. Used off-camera it adds light, exactly where it is needed. And weeds don’t fly away, most of the time. 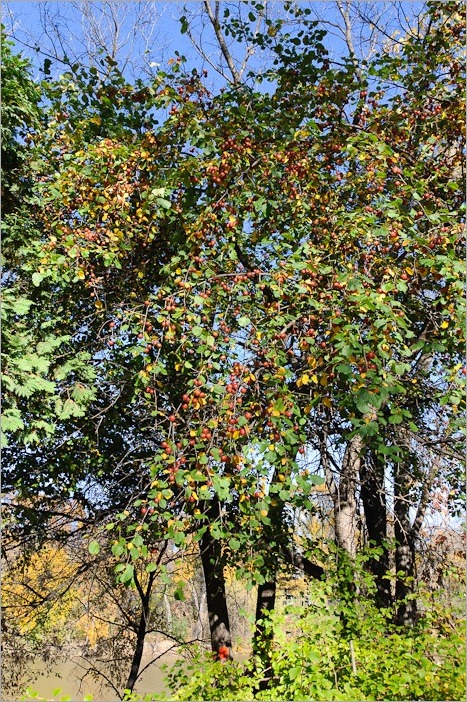 Then there are the trees, sturdier and even easier to photograph. For colors, some trees really light up, but there are not many of those in Munson Park. This small apple tree really made for a nice view. 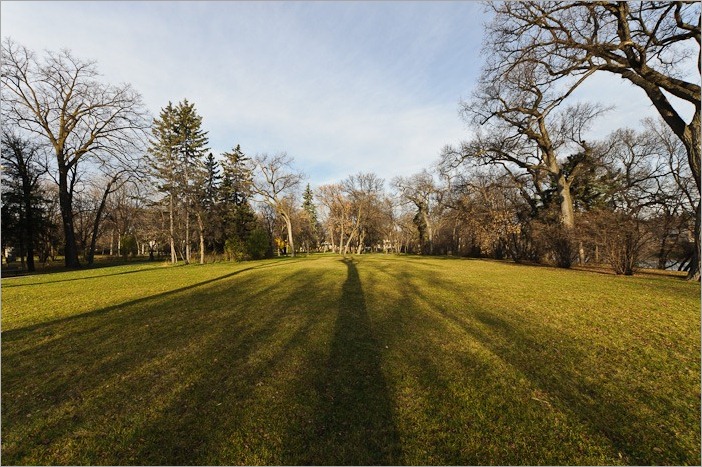 Game of Light and Shadow

One of the more pleasant mornings this week, before it started clouding up gave me this idea. It shows the main field of Munson Park. An, no, I didn’t get my own shadow in this picture, the tree was larger than me. The trees on the right of this picture gave a completely different view only a few weeks back. 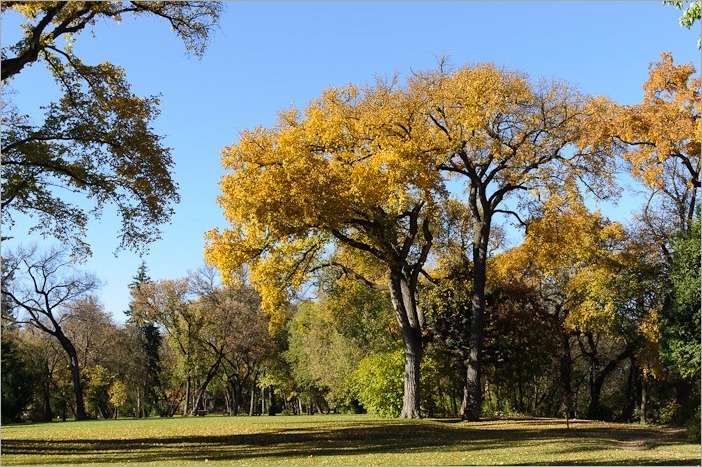 The time frame for this picture was rather short. One day the leaves were green, the next few days they were like this and then… gone. Hard wind and low temperatures made them go quicker than anything else. I could say “Like snow before sunshine” but here in Winnipeg we will get both for the next few months, and both are here to stay. 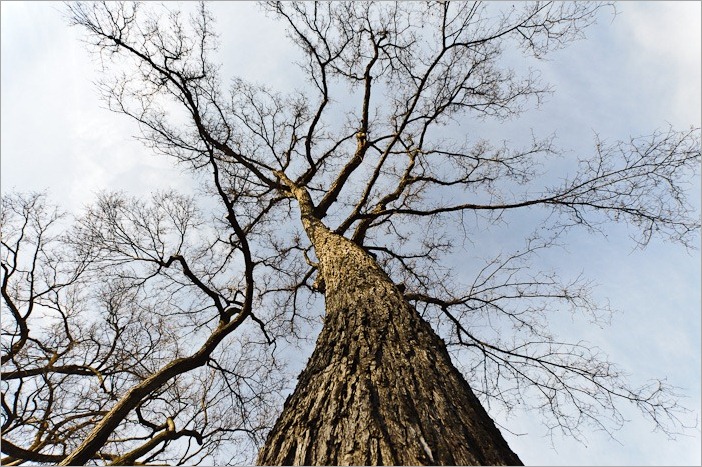 Now the trees in Munson Park are bare, the animals cold and shivering. Concrete not too far away but nicely out of view, noise limited to a minimum by bushes.

As you can see, even a small park without a duck pond or any other attraction has its charms here in the City of Winnipeg. Munson Park is close to my home (didn’t I say that already?) and will continue to be a good place to take pictures and invent stories from.