That’s what photography is all about. One of the reasons I don’t “photoshop” my pictures is that I like the memories of the particular moments the pictures were taken. 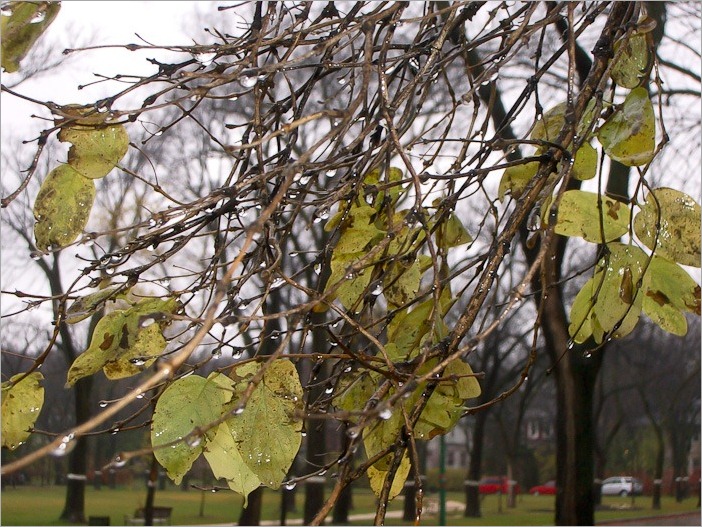 On the other hand, I do photoshop pictures if they don’t come out the way I remember the original moment. HDR or High Dynamic Range treatment of a picture is ok with me, if done properly. Photoshopping the colours from green to blue and back is not. Perhaps I’m just an old fashioned photographer. Memories, however, are priceless even if the moments are not far behind us.

Take a look at what we had this year. Ok, the year is not finished yet and I’m not going to write like a journalist on a history mission here. But look at what we have now at this moment and the pictures we have taken during the summer. 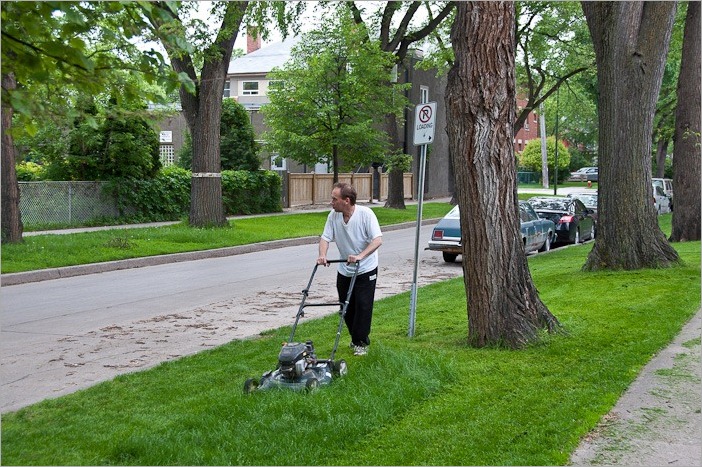 Summer chore… the first of the year

This summer was a lot better than last year’s, that’s for sure. Flowers had a good chance to show themselves in nice, sunny weather, cloud formations were showing nicely, Building Season at its best… Summer chores coming up faster than expected, grass growing at full speed… 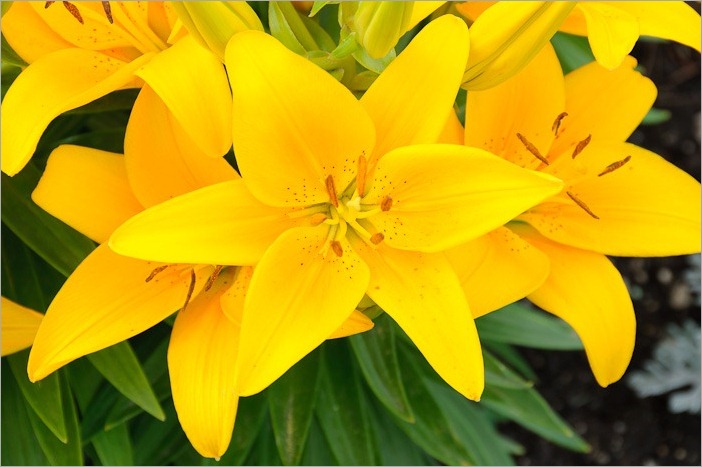 Out of gamut tigers

Ok, taking pictures in the bright summer sun is not supposed to be good practice, but still… The tiger lilies here were so bright yellow that even the camera could not look at them without squinting its lens. Other lilies were behaving better and let their picture be taken normally. 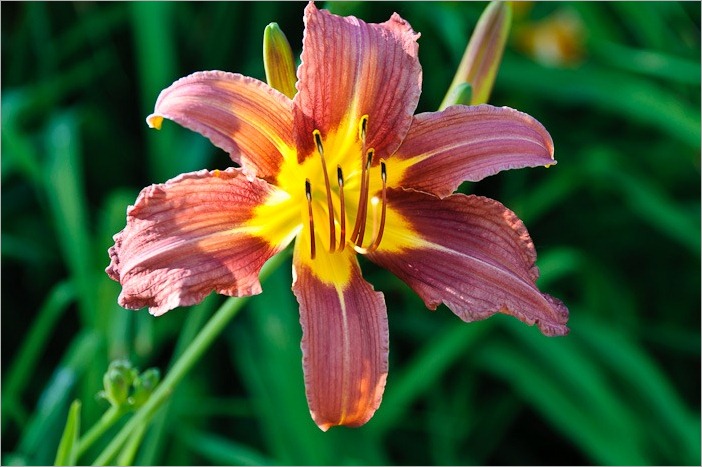 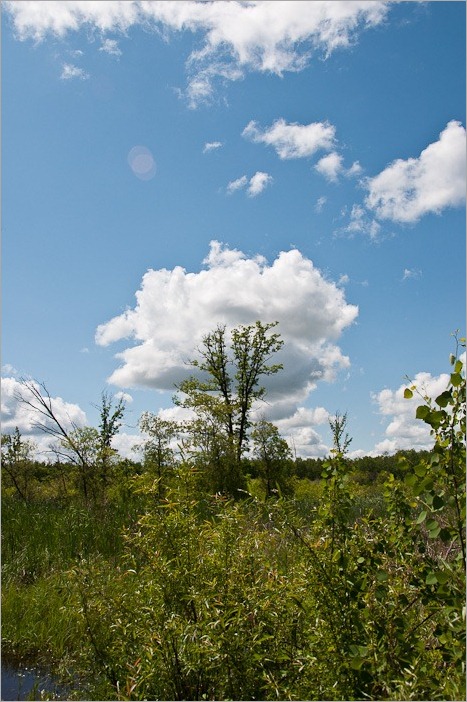 The Assiniboine Forest was in full bloom, even if the ground remained rather wet compared to what it used to be. Skies and green were getting together in a very relaxing way. Hard to believe you were in the city when cruising here with your bicycle. 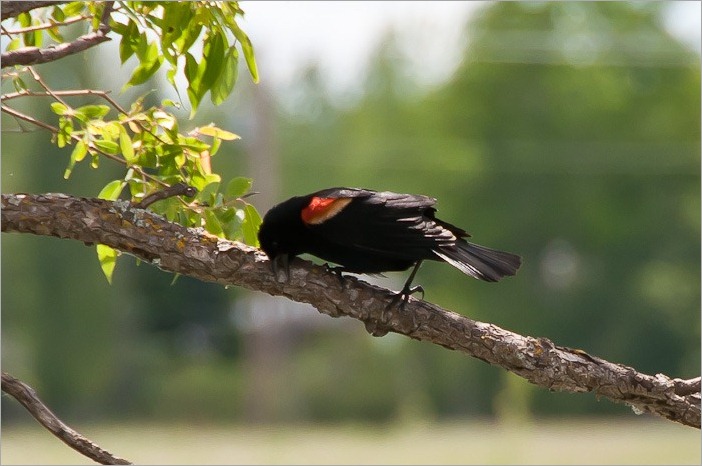 Blackbirds have a strange habit of showing a bright orange streak on their wings here. I always thought that blackbirds were black. But of course you can call them “Orange winged blackbirds” and the problem is solved. 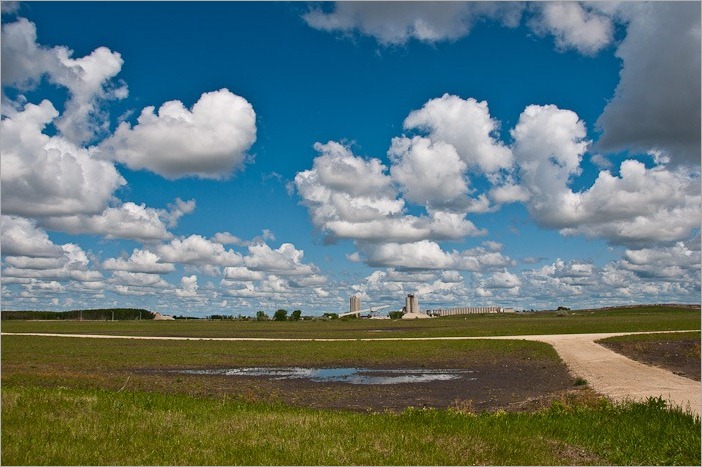 The above picture looks like it’s an industry picture. True, the cement factory here is still active, but it has given way to a place called Fort Whyte Alive, a nature reserve for many species of animals and plants found nowhere else. The previous cement quarry has now been replaced with forests and lakes. 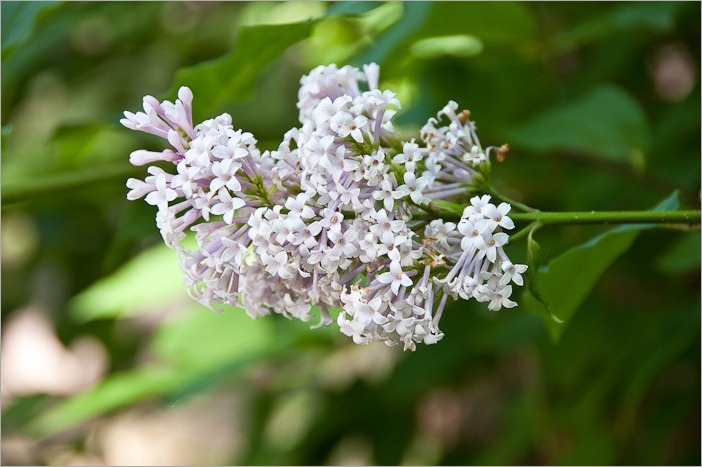 Lilac bushes could be found anywhere in the city, but of course on Lilac Street they had to be bigger and better. Lucky enough, Lilac Street is just around the corner here. Photos to be had everywhere. 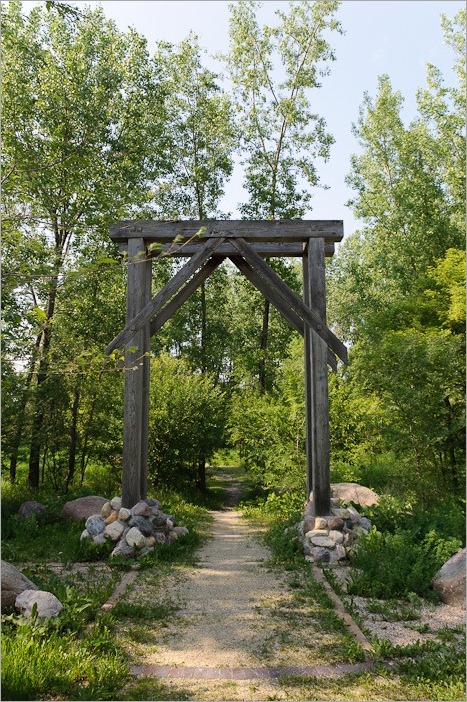 Of course the parks in the city all rivalled to be the best and the most natural. Somehow some way-out corners of the parks didn’t get all the attention. 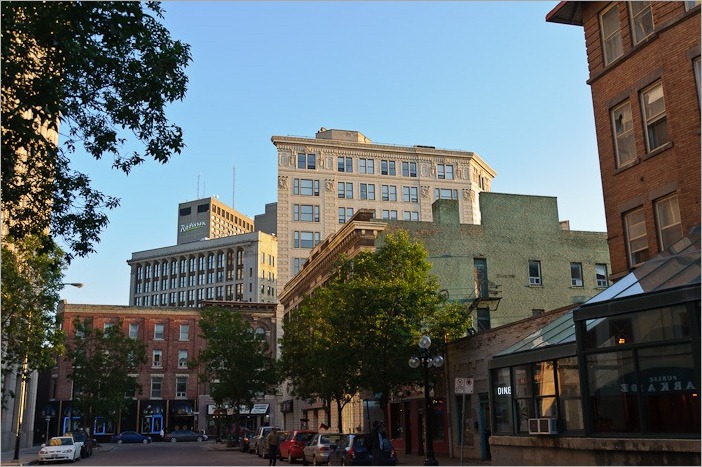 Of course you can also think about the city. What about the city in the summer heat? Well, you go out a little later in the day and get your pictures with better light and lower temperatures. Temperatures soared to +35C here on some days. I added the “+” sign here, some people still don’t believe that Winnipeg can also be a hot place… 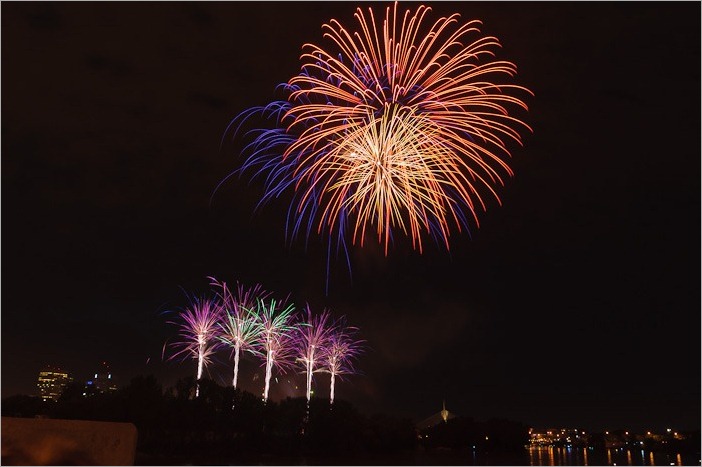 And then, in the middle of the summer it’s Canada Day. One of the rare occasions to get pictures of fireworks.

It seems that Canada has the lowest rate of holidays in the (western) world. Even if that were true, we do like to enjoy every free day we get in the year. Going out to the parks and fire up the barbecue is one of our favourite activities during summer. 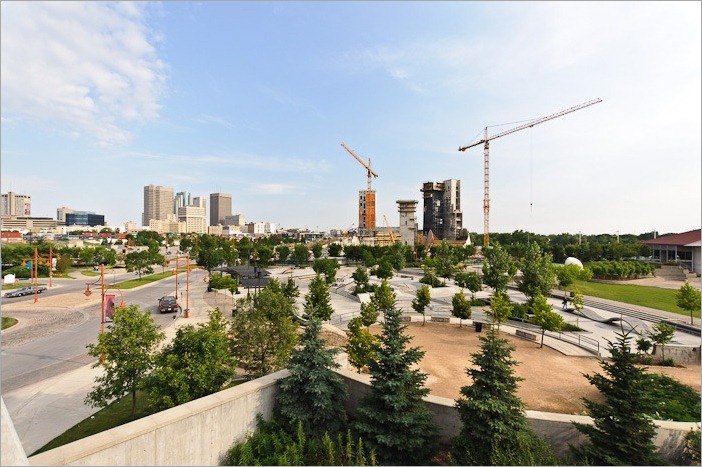 And for those who didn’t have their holidays, construction continued. Here is the future Canadian Museum of Human Rights, still way to go before opening. A nice shot using a wide angle lens. One of these days I’ll get myself a lens like this. (Sigma 10-20mm, wait for me!) 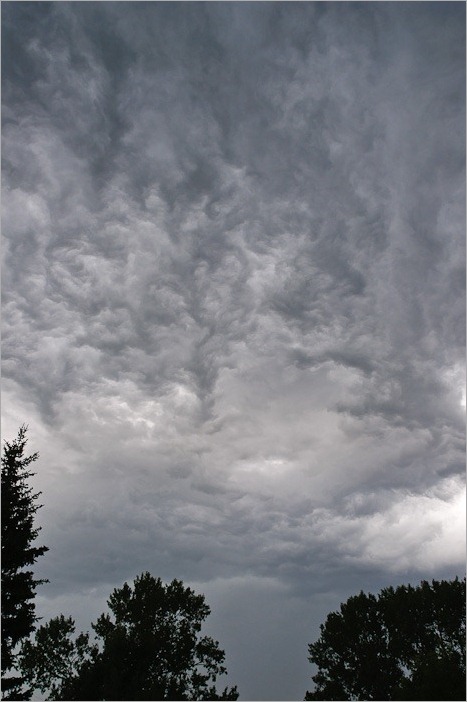 And then, suddenly, the storm clouds gathered and threatened all outdoor activities. Food was stacked away in the trunks of the cars and everyone was waiting for the blast. Often enough that blast would come and go just as quickly, leaving only a little water on the roads. Back to the barbecue! 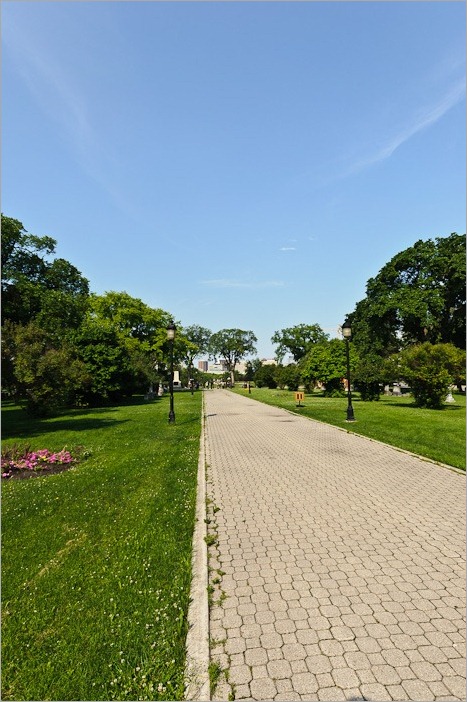 Some places, however, will never see barbecues and food, but are still real attractions for many people. St Boniface Cathedral, or what’s left of it, is always a good place to get a picture. Instead of taking a picture of the lonely standing facade of the old cathedral, I chose to take a picture of the entry lane. The lane is flanked on both side by a cemetery with the most prestigious names on the tombstones. 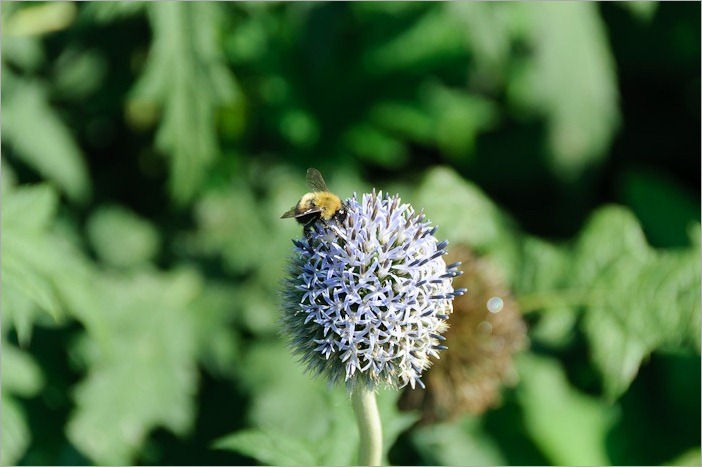 Of course a little trip to the English Gardens could not be avoided. Many photographers spent some time in these gardens. Built in the 1920’s they are redone nearly every year. What are considered perennial plants in the rest of the world, will most often not survive the winter temperatures of Winnipeg. 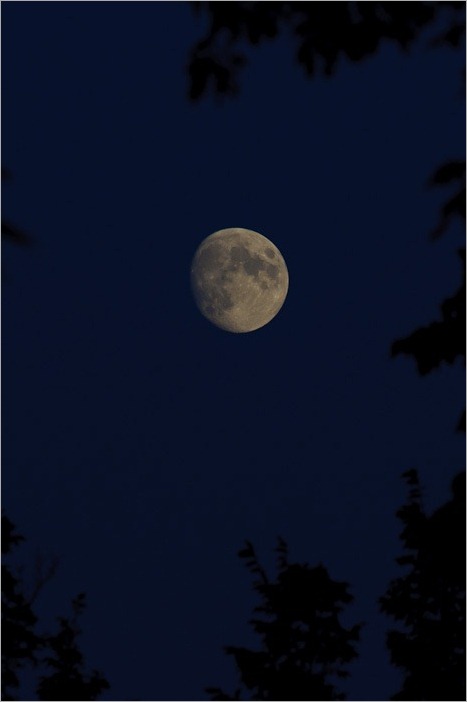 And then, already the last full moon of the summer season. I chose to get it a few days early, simply because we were going on a trip to Europe a few days later. The above picture is handheld, no frills and no special processing.

And then the summer was at an end. Gone too quickly as usual. It leaves us with many more memories than I can write about here. In all, I guess I must have shot around 4,000 pictures this summer. Lots of keepers, lots of rejects, but all of them are memories, blurred or not and nigh a photoshopped one in view.