Whenever you go on travel or holiday with a camera you come back with pictures. Some will be the obligatory pictures like the jet engine of the plane you’re about to board… 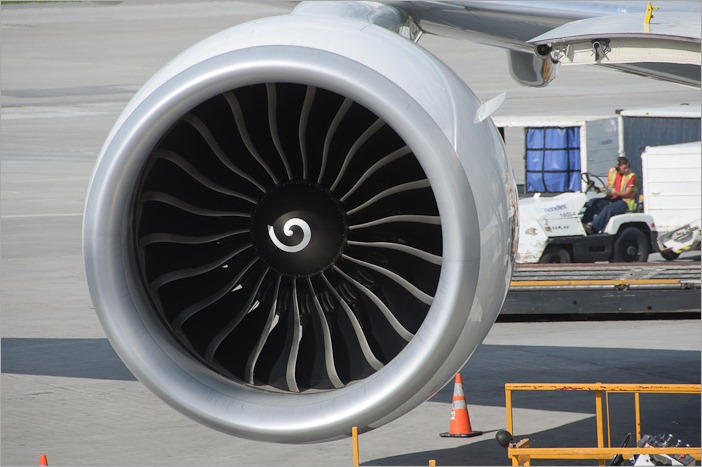 And you will have a lot of other pictures, with which you do not have a complete story or a complete set of pictures for a story. Here are some random pictures of our travel to Ukraine and Holland in the past five weeks.

Leaving from Winnipeg in the rest of the plane pictured above, we arrived in Paris. Paris is one of the major airports in the world, so it was no surprise to see the new part of that airport opened for transatlantic flights. 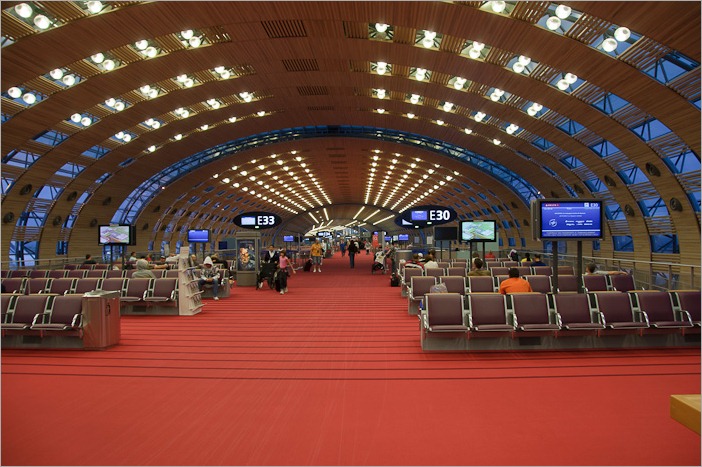 And that is only one of the two major airports in Paris. Taking pictures after a 9 hour flight at 6AM is somewhat of a “problem”, at least being still enough to get sharp pictures is.

After Paris we arrived in Kiev, Ukraine. The change is immediately visible. Ukraine is a completely different country from the western world. In many ways it still has to shed its Soviet past. Luckily you don’t have to photograph that past, there are many other opportunities for good pictures. 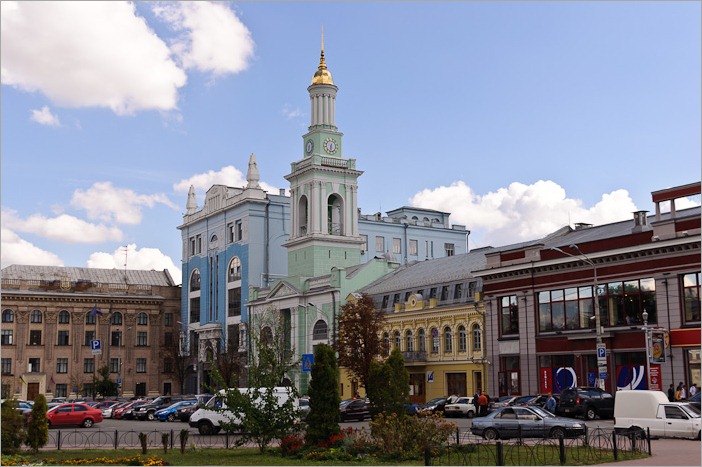 Although Kiev is full of churches with big golden domes, this time we didn’t get near them. Our schedule was really too tight. So pictures will have small domes, I’ll show the big ones another time. 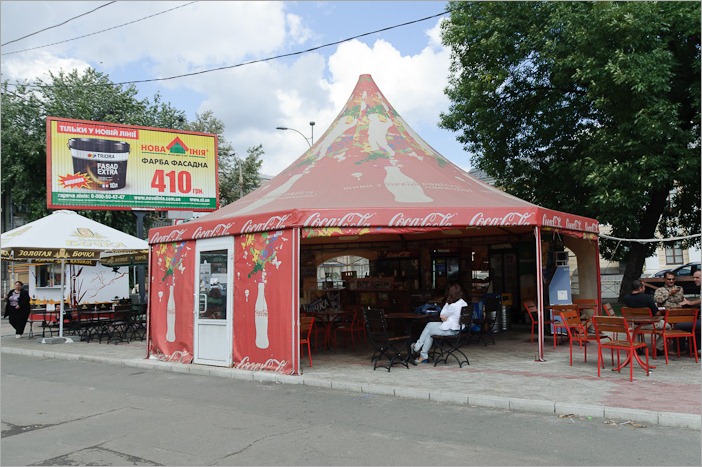 One thing that is prominent in Ukraine is the places where you can drink something. Places like this tent on Kontraktova Place in Kiev are very common. Despite the sponsor of the tent, you can get anything you want in there, from the advertised beverage on the tent to a stiff vodka, along with the necessary food. 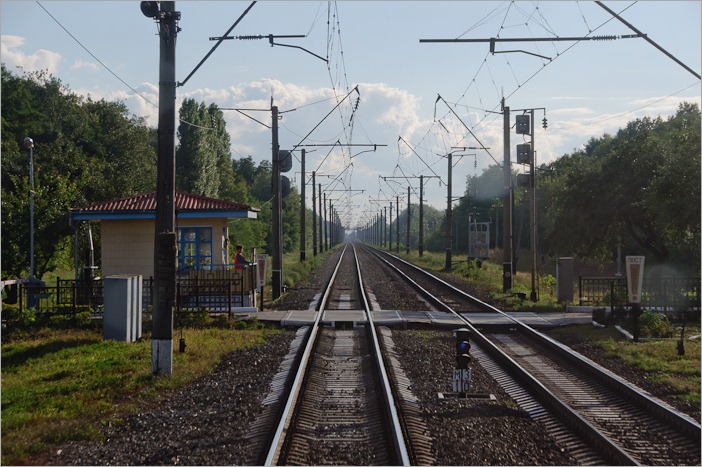 From there on, we were on our way to our final destination, Konotop in the North of Ukraine. The train ride was about 3 hours, we got a train that didn’t stop at every single little station. The above picture is from the back of the train, through fairly dirty glass. Happily Lightroom is capable of washing windows and saving otherwise drab pictures from the Recycle bin. 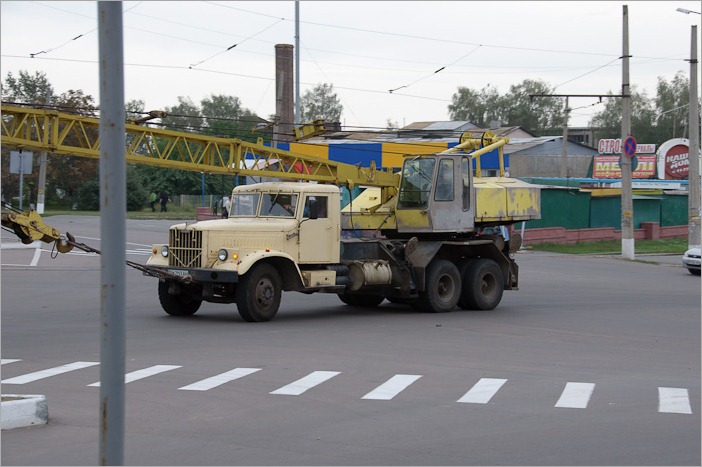 In Konotop, construction is everywhere. Like I already said here, the city is building itself a better future, despite the crisis in the country. Lots of changes make that the city becomes more and more open to the world. It is already a big change since the first time I set foot here in 2003. Construction material is still mostly old, but functional. So why throw it away and buy new? 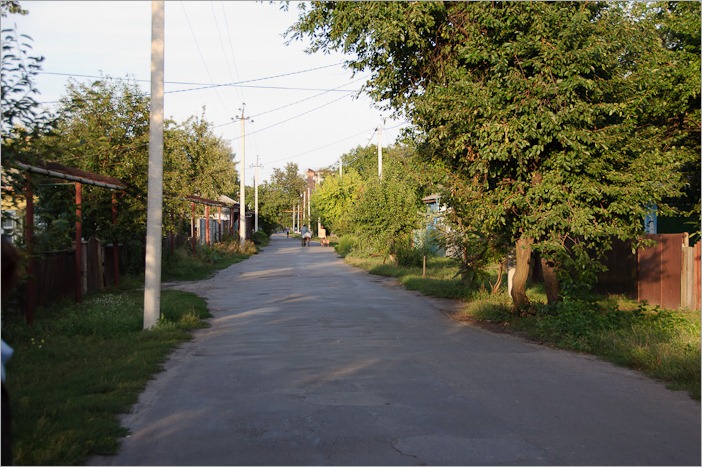 Not all parts of the city are in the construction turmoil, though. Many places continue to live like they have for the last centuries, give or take some small changes, like paved roads.

Then, you see something different. Something BIG. The Soviets never did things in small, so the statue of Taras Shevchenko is really big. 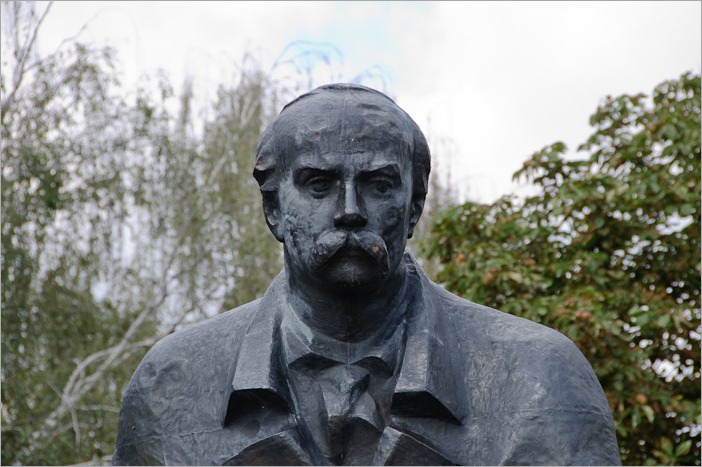 The statue is a little chipped here and there, but only on the surface. It does not have the Leo Mol style we know in Winnipeg, but it’s a good statue. And it’s in the center of the town.

Also in the center of town was the celebration of the city’s creation. In Ukraine, many cities celebrate the year the city was founded. It is mostly a local holiday and everyone is welcome. In Konotop the festivities were in the middle of the specially closed streets. 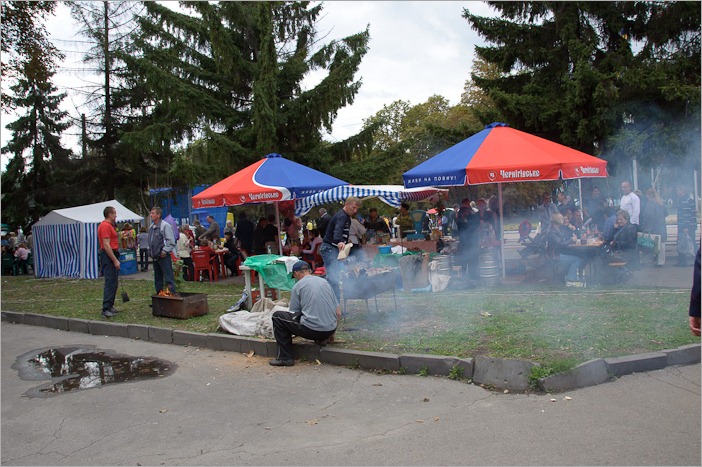 Barbecue in the street

One of the pleasurable things in Ukraine is that whenever there is a party in the streets, there are barbecues. Always on wood fires, often on old oil drums, or homemade barbecues. Wood fires inside and meat on the top. Meat of all kinds: sausages, steaks, hamburgers, shashlik (meat on skewers), you name it, they sell it. 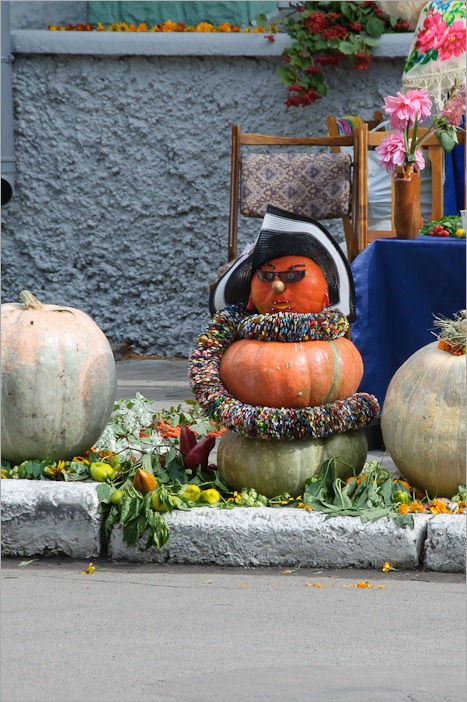 A bit early for Halloween, but the pumpkin harvest was good this year. It seems that year after year these pumpkins get bigger and bigger. So I found a royal version of a pumpkin statue. It looks like they made it in the snowman style… 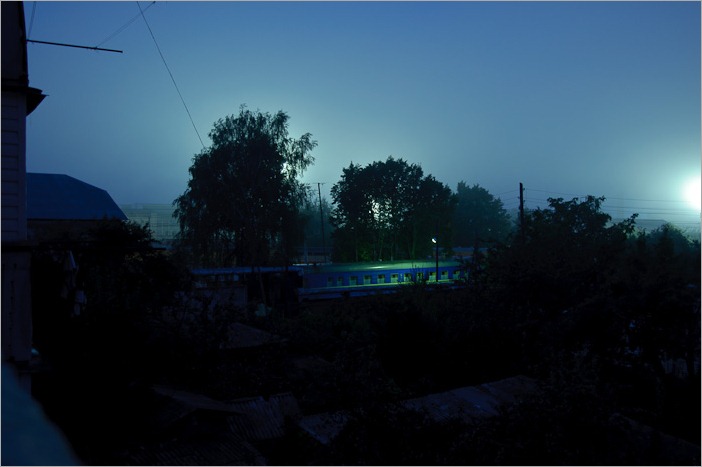 Train station at 5 AM

And then, before you know it, the time is ready to go to Holland and spend some time with the parents there. So, get up at 5AM, breakfast, a little picture of the train station in the mist before getting the train at 6.06AM to Kiev.

Arrival in Kiev around 9.30AM, then straight to the airport and off to Holland…