Leaning through the ages

Whenever someone talks about a leaning tower, the image of the leaning tower of Pisa in Italy comes to mind. The famous tower where Galileo Galilei dropped weights to demonstrate the principle of mass. 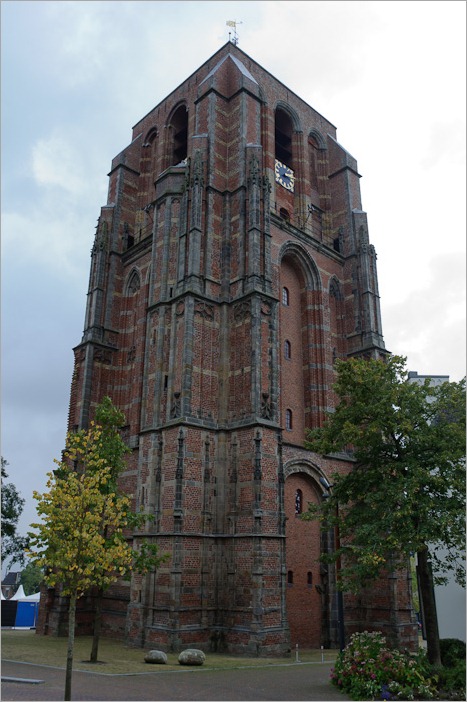 In Leeuwarden, Holland stands another leaning tower called the Oldehove. This one, apart from leaning towards one side is also crooked as a banana. It also leans more than the tower of Pisa. Galileo would have been able to do even more experiments here.

In 1100 A.D. the city of Leeuwarden did not exist. There were only a few villages here, surrounded by a sea called the Middelsee. The place where our tower now stands only showed a small stone church. In the 12th century plans were made to build a bigger church, but only the foundations were finished. The church never saw the light.

In the 16th century, the three villages had grown enough to be joined to form a real city. Being a city in those days gave more rights than  being three individual villages. Among those rights was the right to build bigger churches.

The church dedicated to St Vitus was built. The tower, however was to be higher than the neighbouring city’s Martini tower. This is (thought to be) the original plan. 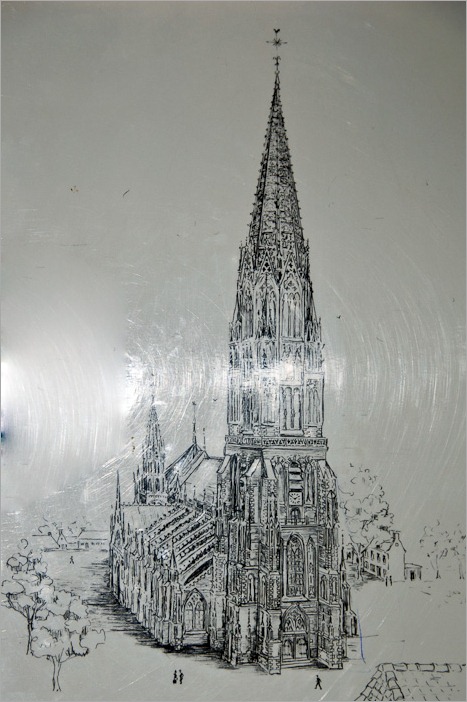 There is a small but significant difference in the grounds on which these two towers have been built. In Leeuwarden the ground was blubbery, muddy and soft. In Groningen this was a much harder and stable ground. But geological studies were not in fashion in those days.

In 1529 they started building the tower out of bricks. One city-specific sentence by the court was the laying of so-and-so-many bricks as a punishment for a crime. Forced labour in other words. 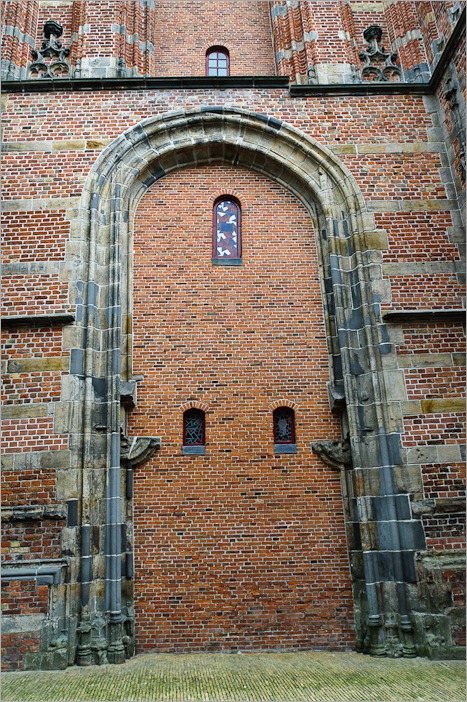 West side, closed in 1599 for extra support

The architect of the tower, Jacob van Aaken came from a region with hard ground; Aaken or Aachen in Germany. The foundation of the tower was not deeper than 1.15 m and made of stone and clay. To make sure that the tower wouldn’t fall, wide stone abutments were built to keep everything straight. 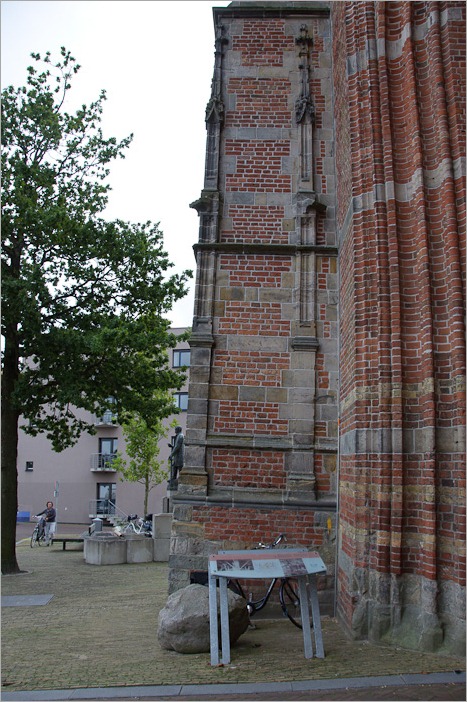 “Slightly” out of balance

When the tower was a mere 10 meters high, things were already looking strange; one side was sinking away in the ground, despite the foundation of 1.15 meters deep.

After three years of working on the tower, Jacob van Aaken died, he never saw the finished result of his plans. The next architect worked only one year on the tower before the building was completely stopped. 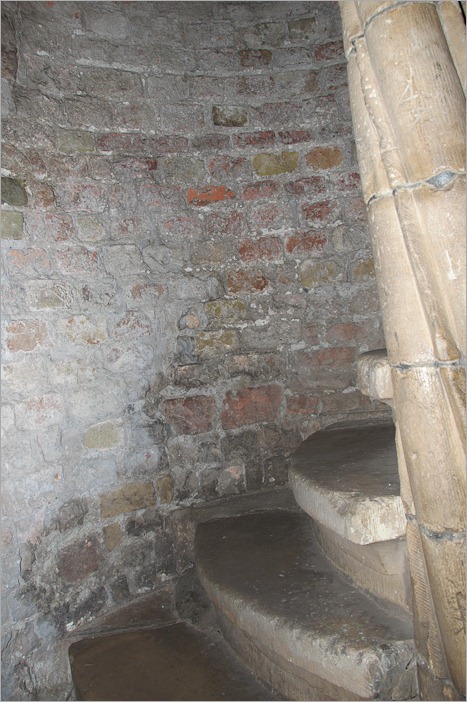 Stairs leading to the roof

By that time, the tower was 1.68 meters out of balance. More than the tower of Pisa… Instead of a straight tower like the one in Pisa, in Leeuwarden they tried to correct the leaning by adding more bricks to one side of the tower. The result is a leaning, crooked tower with nearly no straight lines, anywhere.

The church to which the tower was built was apparently not of such a good quality. When the storm of 1576 was raging over the city, the church collapsed. Many protestant Frisians considered this as a sign. The Catholic church had no place in their protestant city, was the opinion.

The walls of the church stayed until 1706, when these too were destroyed and the bricks used for other purposes. Even if these stones were of a catholic church, that was no good reason to waste good building material.

The tower remained an object of worry, every century it was necessary to put it back into “shape”, at least make it secure enough that it wouldn’t fall on top of the houses built underneath. The last renovation was finished in 1998. 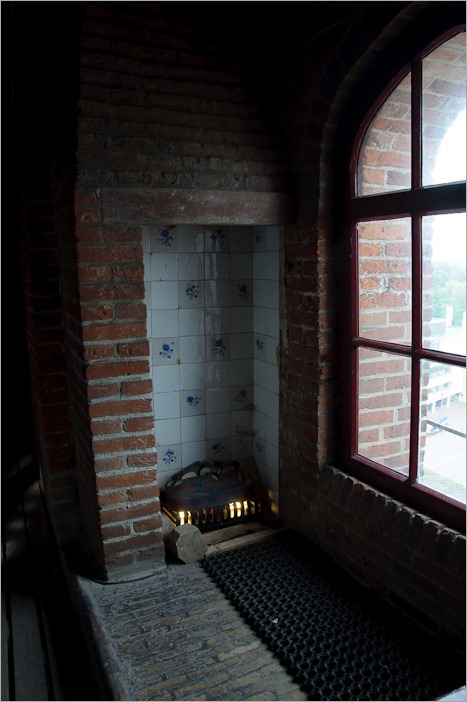 Hearth at 35m above ground level

Many people have thought that the tower was once used as a lighthouse for the Middelsee. This cannot be true, by the time the tower was no longer a church tower, the Middelsee was already filled with sand and mud, no ship would ever be able to navigate in there.

The tower has been used as a fire department lookout, the stone hearth for the cold nights is still visible.

But the remaining mystery about the origin of the leaning of the tower was only discovered in 2005, nearly 500 years after the building of the tower.

The foundations were placed on top of the dike that protected an ancient “terp” or man-made island. Obviously that dike was never made to withstand this kind of pressure and began to sag as soon as the weight became more than it was ready for. Until today it continues to sag, continuous maintenance is necessary to keep the tower from leaning too far. 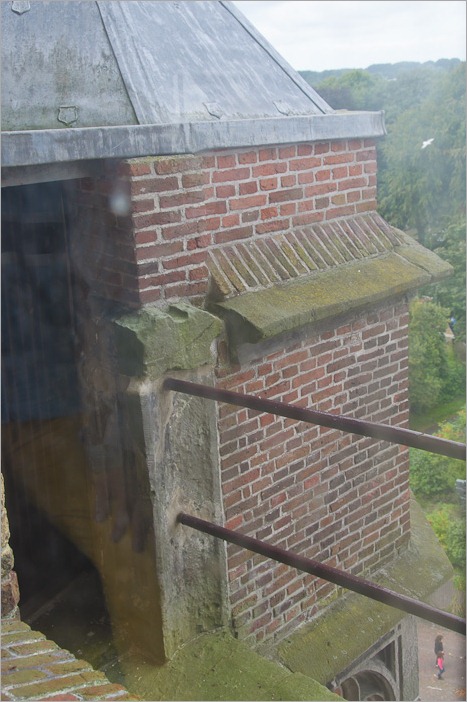 Today the tower can be visited by everyone, the stairs even being crooked have walls on both sides and do not give space for falling. At some point I was even a bit worried that I couldn’t pass the narrow parts of the stairs near the roof. You cannot go on the outside walking spaces though.

The oldest of the bells of the tower is now mostly silent. People have complained about the “noise” the bell made. A smaller bell is still there, and can be heard when you simply hit it with a wooden hammer. 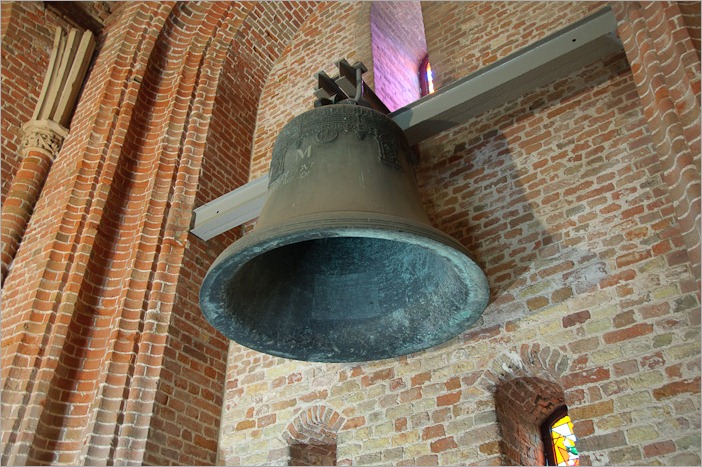 Listen to this bell. 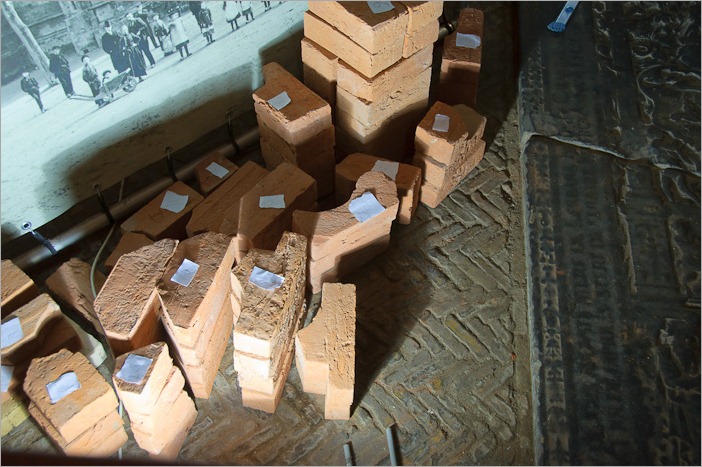 As you can see, the bricks are all different. They are not our standard rectangular bricks. Every single one has its form and place in the tower. It must have been a real puzzle to get this built in only three years. 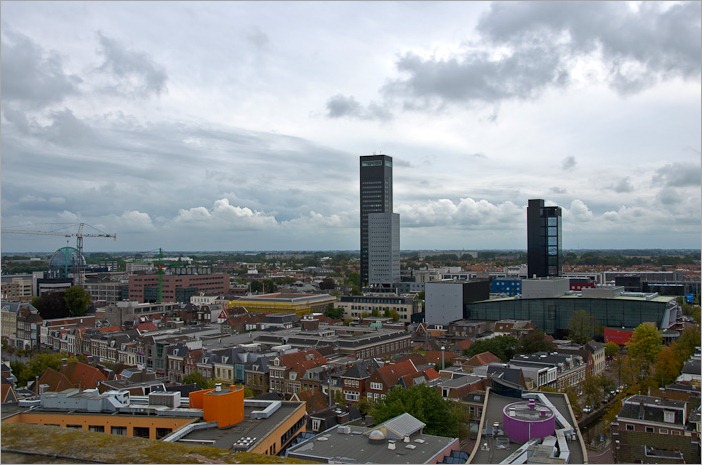 The view from the top of the roof is spectacular, this is only one of the many pictures I took of the city. Between the towers in the picture and the tower I was standing on there is an age difference of around 450 years. The walls of the Oldehove are 2.36m thick on the north and south side, and 60cm on the west and east side. I wonder which one of the towers will still stand, 450 years from now…

If you ever come to Leeuwarden, make sure you visit this tower and its magnificent history. Even if it is only one third of its planned height. No use in trying to find reasons or excuses for its current appearance, just admire it for what it is today.