This is a “slogan” that is written on many schools in Ukraine and probably in Russia as well. This is one of the mottos from an illustrious father of the Soviet Union: V. I. Lenin. 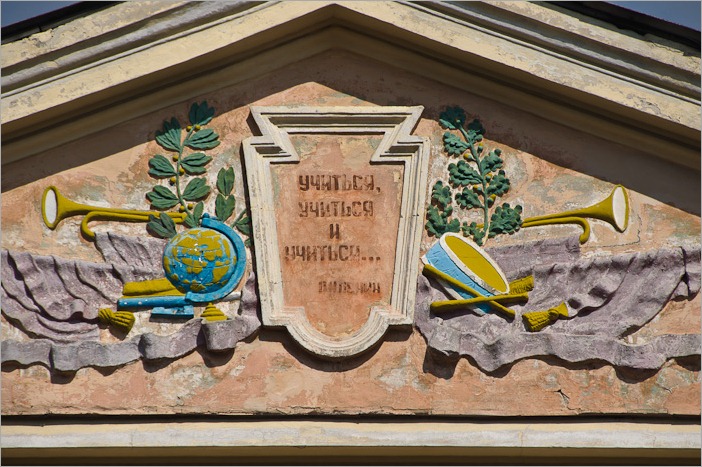 Famous saying by a famous man

Now I am not a fan of everything he had to say and everything he put in motion to create the Soviet Union, but this little gem dates from far before the Russian Revolution, probably around 1909 and for me it holds the truth. Learning is an important part of life and should never be considered finished.

Other schools also adorn this slogan, as can be seen here.

And even if this text is still on the schools in Ukraine, other, more national people are also well represented. In Winnipeg we had the famous sculptor Leo Mol about whom I wrote some time ago. Leo Mol made sculptures of Taras Shevchenko. Many of these sculptures can still be seen in the Leo Mol Sculpture Garden in Winnipeg, in Washington DC and in many other places in the world. 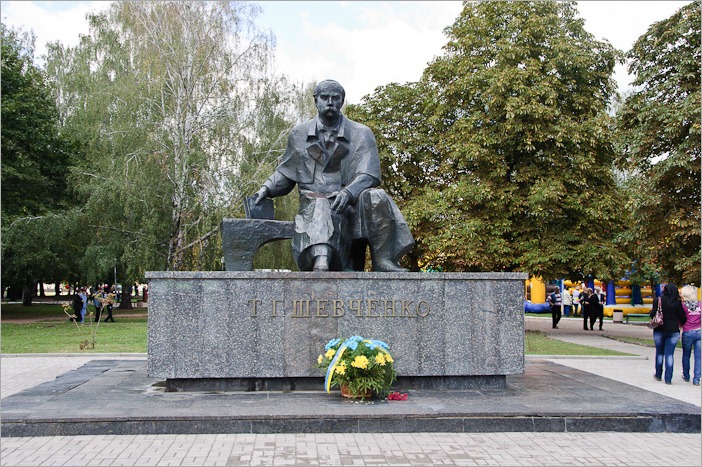 Taras Shevchenko is also present in Konotop, where you can see him with the original spelling of his name. The sculpture is not by Leo Mol.

Konotop has had a long past, some say the city began in 1635, the city itself holds it to 1637. The recent past is more present than that old past.

In the recent past, there were Soviet plans to build a swimming pool of Olympic size in Konotop. When at last all the plans were created, stamped and corrected (probably multiple times and not only in this order), the hole was dug to begin the works… 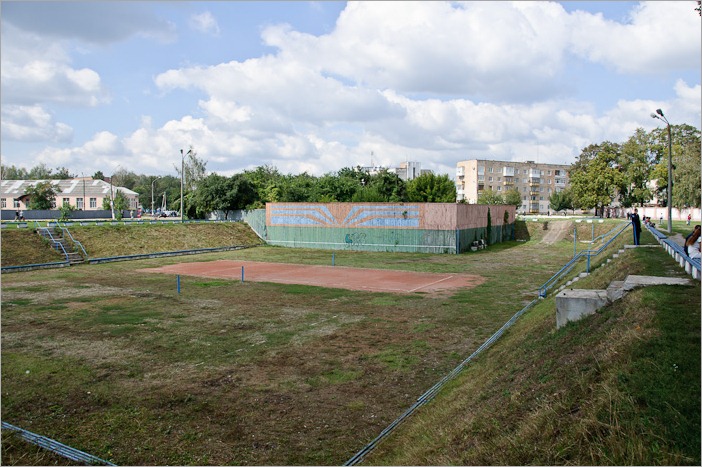 … and the Soviet Union came to an end. After that, what was there to do? For many years this hole was simply filled with garbage and maintained by nobody. Now the city has decided to make some tennis courts and keep the hole clean of garbage. A nice step in the right direction. 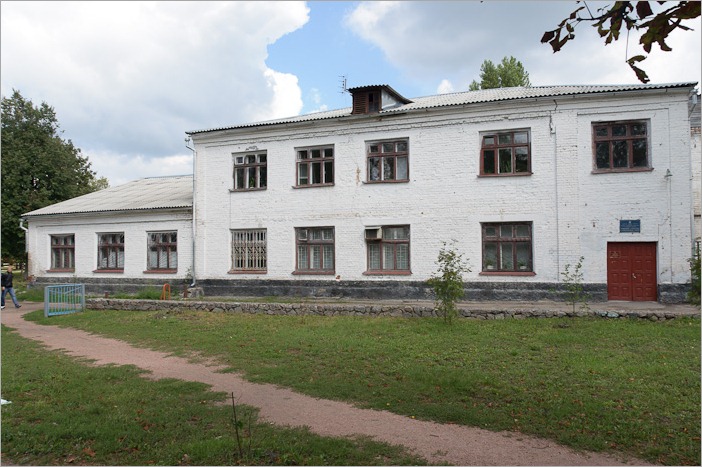 When you walk through the city, there are many old buildings and buildings that look intriguing. It is not often that one can visit these buildings. And then again, some building owners do not favour photographers. The building where the militia or local police is housed does not welcome photographers warmly, but you can come in and look around if you want. I can assure you that the building is old and is not in need of photographers. 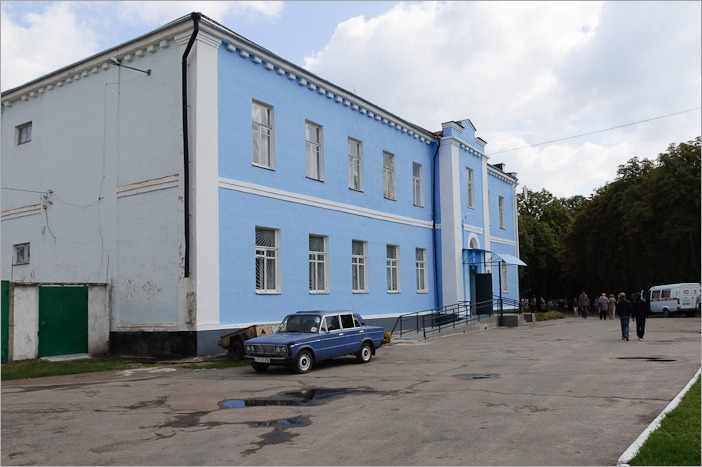 House of the Scouts

So I tried to go into a different building, asking first if they didn’t mind any pictures. The House of the Scouts did not mind. So when we went inside… 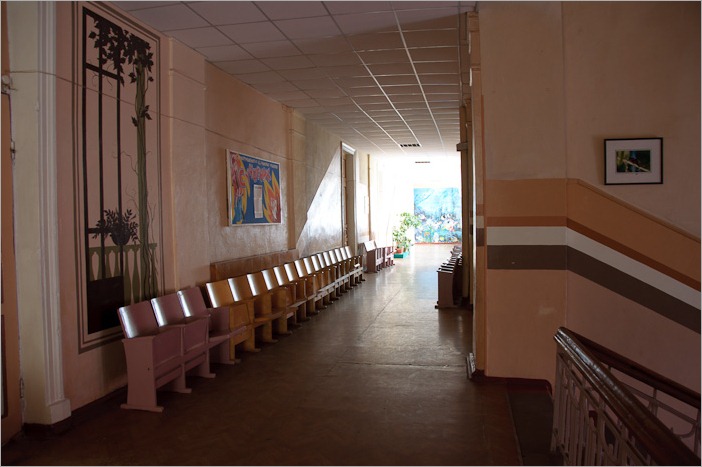 Furniture waiting to be used

The inside of the House of the Scouts has been renovated a few years ago. I did not expect any big changes but the result here was very pleasant. Even if the furniture looks little inviting for my European posterior… 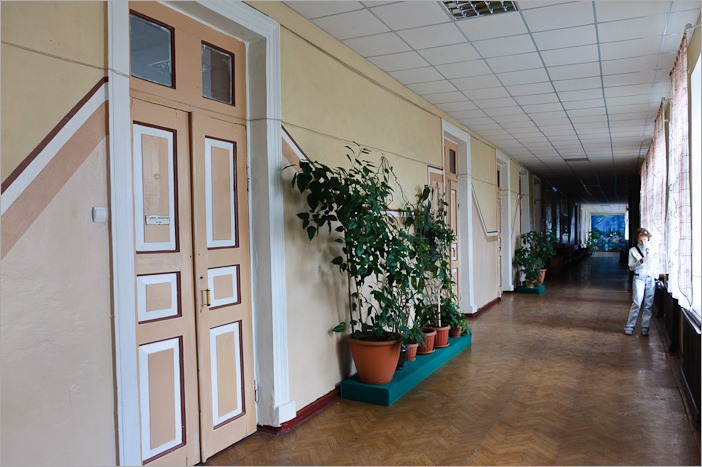 The children all come to this building and spend some time doing art, dance or any other activity. Normally the walls are covered with the results of their labour (except for the dancers I suppose) but this is summer time, everything is cleaned for the coming year.

The far end of this corridor still shows an artwork made by the children. 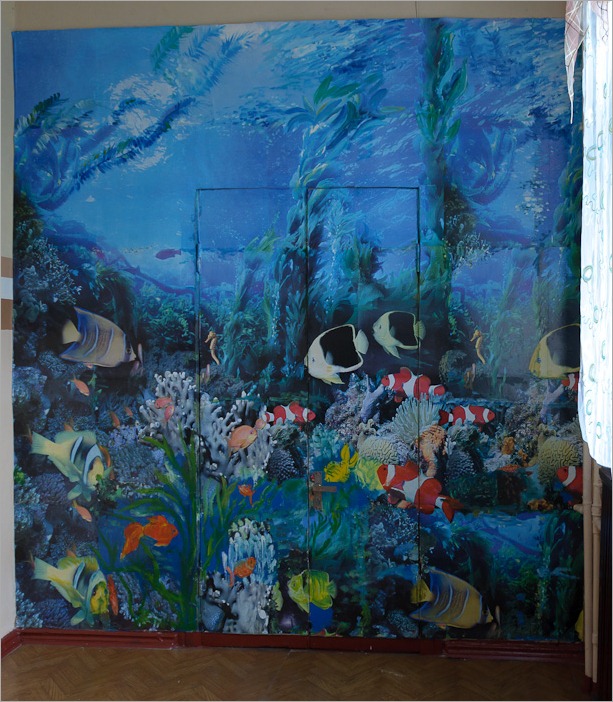 Not so surprisingly, it also hides a door. We did not have access there and since we were guests in the building, nosing around behind closed doors is not a sign of good manners. 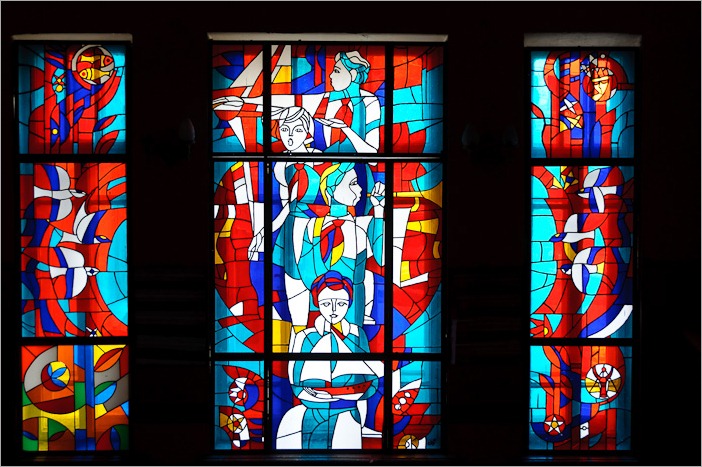 When exiting the building, we saw this stained glass. This is in a pure Soviet style, the faces represent people, but do not represent persons. This goes for most art of the Soviet period, not only here, but in all of the country.

Although this building may not represent all buildings in the country, it gives an idea of what can be done with old soviet architecture.