In other words: “Welcome!”. This is how we were greeted at the Ukrainian pavilion on the Folklorama Festival. Folklorama is the “other” international cultural festival in Winnipeg. 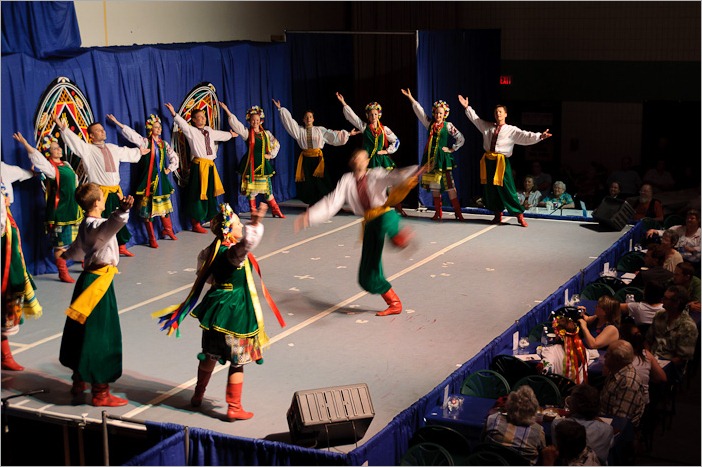 Dancing at the Ukrainian Pavilion

Folklorama is held in the first two weeks of August. Pavilions from all over the world are here, not to compete, but to make you sample and enjoy the cultures of people that live here in Winnipeg. Among these cultures is a very strong Ukrainian presence.

So, if Ukrainians are present, they will show themselves. Not only at the Folklorama, but in all everyday life as well. At the Forks in Winnipeg, they are also very present. 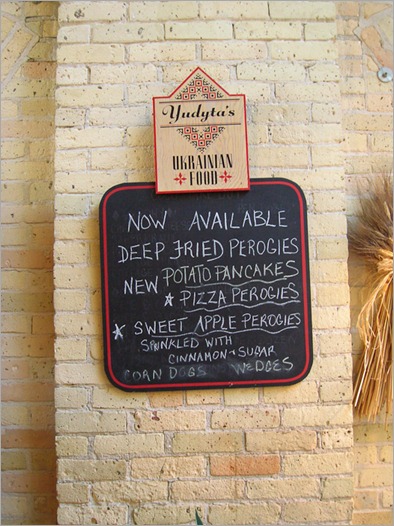 Ukrainian food at The Forks

The traditional Ukrainian food is a little modified and looks more like the Canadian version, but nevertheless it is advertised as Ukrainian. We’ll believe that. Perogies? Eh, I believe we call them Vareniki (Вареники) in Ukraine, but they taste good.

Also the collectibles are for sale, straight from Ukraine if we can believe it. 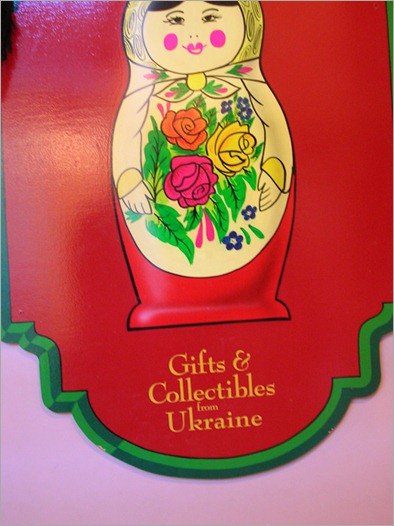 But let’s go back to Folklorama, the Ukrainian pavilion…

The Ukraine-Kyiv pavilion was set up for one week and had obviously lots of success. Every night ambassadors from other pavilions and countries come here and are introduced to the public. The ambassadors do the same in return in their own pavilions.

At the entry, a big exhibition of traditional Ukrainian costumes from all kinds of villages in Ukraine. Wonderful to see, impossible to touch. 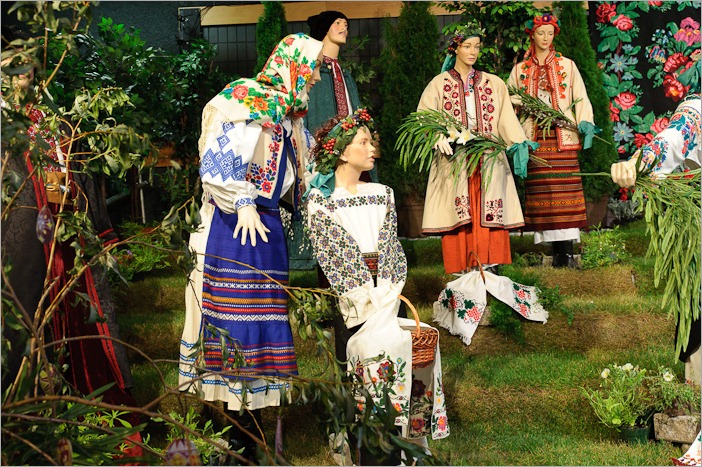 The performers here were silent and didn’t move much. I guess that when it was time to wear these costumes, many of these people would never have met. The villages were very far away from each other. 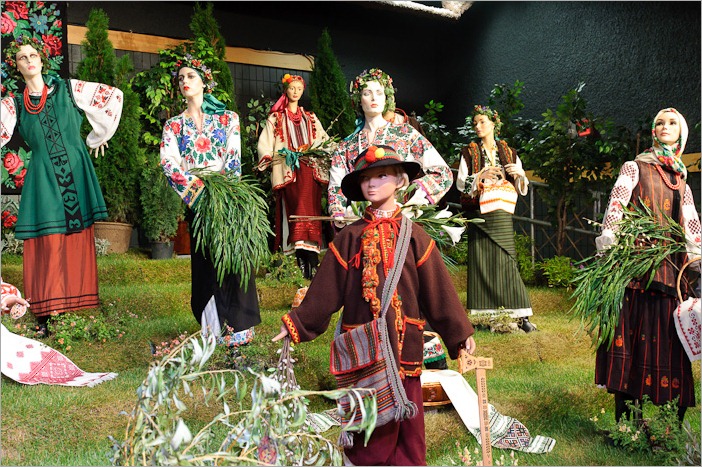 Obviously, when you say Ukraine, you also say Pysanka, or painted eggs. Intricately painted eggs for Easter. But after Easter, the eggs are eaten and the shells are doomed. Well, most of them. Some people also make little mosaics of the used Easter eggs and display them here. Prices start at 200$ a piece. The sky is the limit. 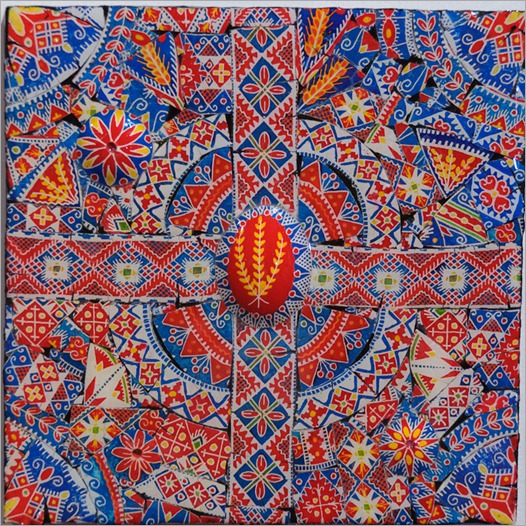 Mosaic made of eggshell

When I was a boy, in school we did the same, but I guess that these artists have really perfected their art. 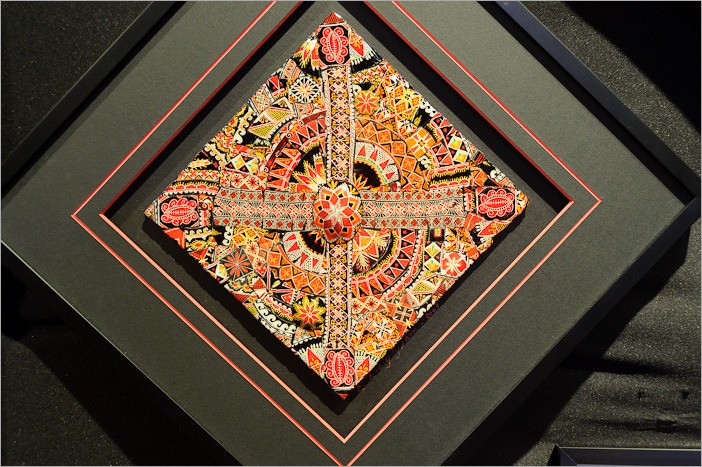 After that, it was time for some dance performance. 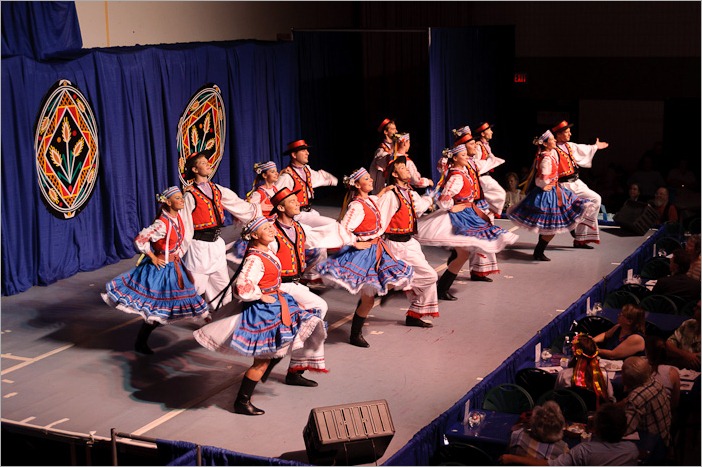 The performances were very nice, lots of action and music. For the lovers of music only, there was a different group. 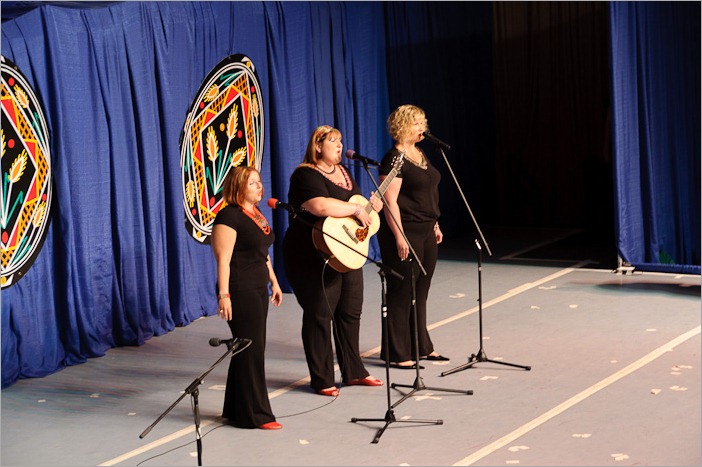 The Ukrainian singers here were also very fluent in English, I guess they have been here already for a very long time. They were singing Ukrainian folk songs, and in Ukrainian. For as far as we could, we sang along, in Ukrainian of course.

And let’s not forget about the Ukrainian food. The big hall where the pavilion was organised was full with people and tables. 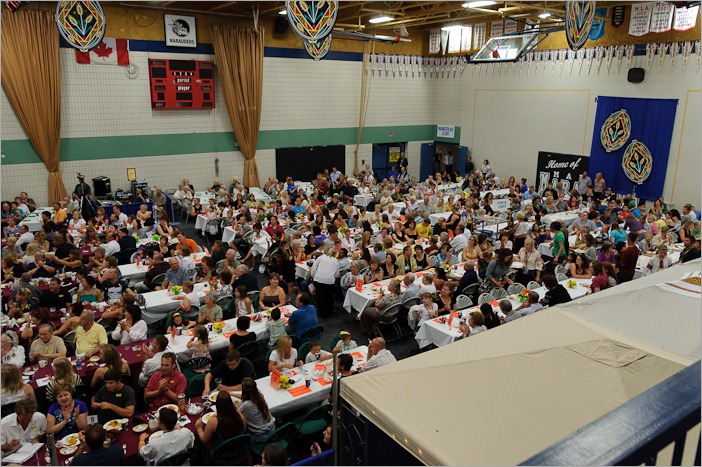 Traditional Ukrainian food, vareniki, holubtsi and other things were presented. We were not that hungry, so a little L’vivske beer was nice and refreshing.

Then it was time for the young dancers to show what they could do. 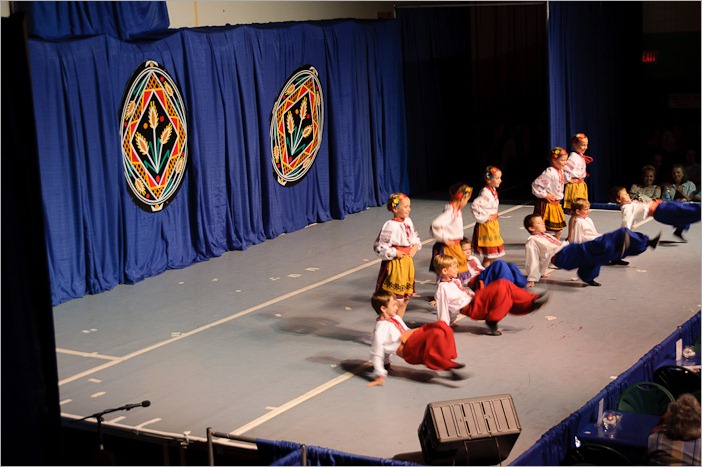 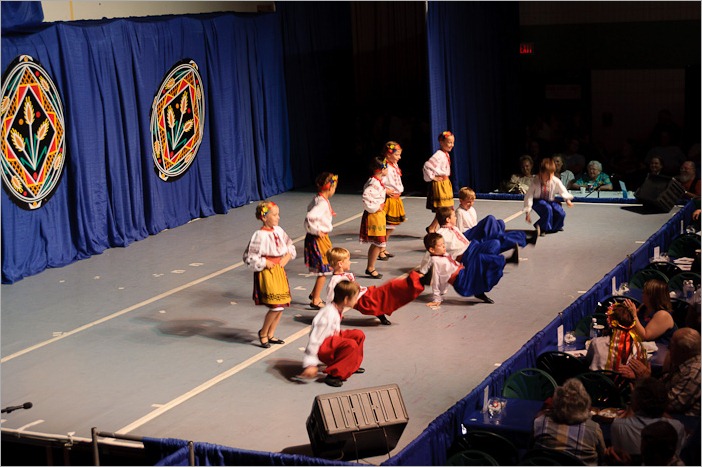 Nice to see that youngsters are also interested in dancing and that not only the adults are shown. Although I doubt that these kids came directly from Ukraine, their dance looked very traditional and was well executed. If I had the chance, I would go and see them again.

Now of course, after the kids came the big explosion of dancers. A professional group from Selkirk, a town about 30km north of Winnipeg. These guys must have had an energy excess! For more than 15 minutes, many of the dancers never touched ground for more than a few seconds at the time. 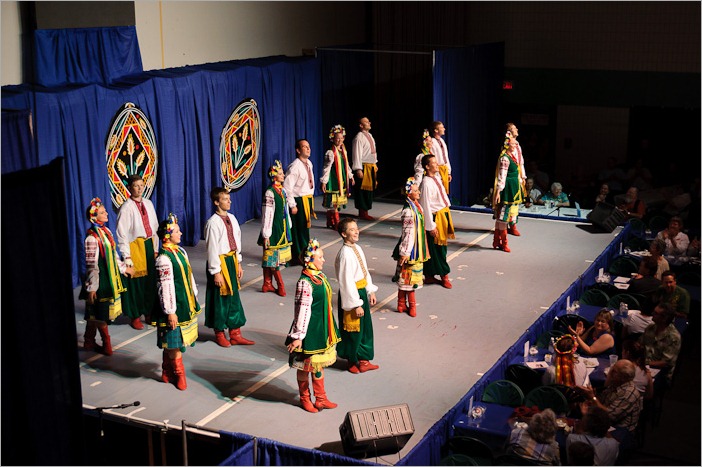 The pros, too tired to make my picture blurry

Difficult to photograph when the lighting is not optimal. I decided to take their picture at the end when they were really too tired to move too fast for my camera.

All in all it was a very nice evening. It makes me think of the coming weeks, when we ourselves will be in Ukraine as well. Only two weeks and that’s it!

Winnipeg-Kiev, Kiev-Amsterdam, Amsterdam-Kiev, Kiev-Winnipeg. A lot of travelling, but definitely worth it. As for the Folklorama, we have to go and see more next year. The freezing variant of the Folklorama is the Festival du Voyageur, held in mid-winter.