The saying “Going Downtown” often means going shopping. Downtown Winnipeg certainly offers this possibility. Although many of the bigger and easier facilities for shopping are located out of the city center. What is left in downtown Winnipeg is a place where old and new live together and collide. 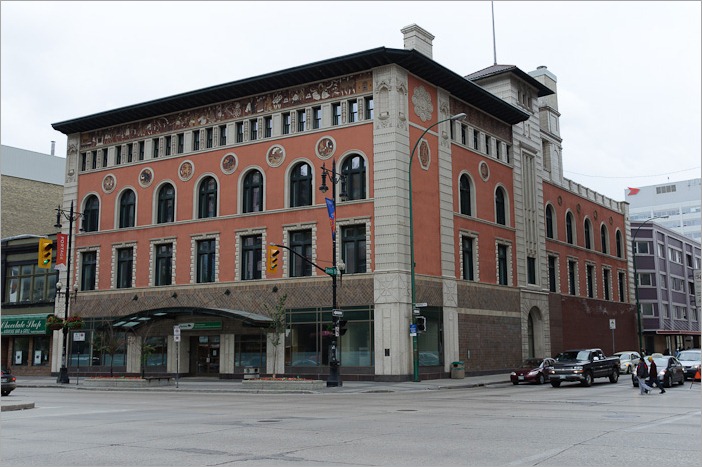 The history in Winnipeg is a little more than a couple of hundred years old, but the styles of the past periods are still visible. Some say that the city is too quick in removing old buildings and putting up modernity. There are still places where we can disagree with that. Let’s take a look…

Tearing down old insalubrious buildings is one of the responsibilities of a city. No one will disagree with that, after all, it’s for our own and our children’s safety. However, when it comes to judging the state of insalubrity of a building, the opinions tend to diverge. In Winnipeg, many old buildings have been torn down in the last few decades.

Also, many old buildings have been spared and are still used for purposes they were not intended for when they were built. Of course preserving an old building and putting it back into a state where it can be used, certainly after sometimes decades of being disused, is a very costly affair. 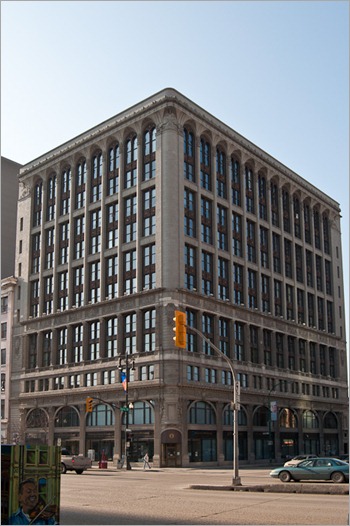 Now I’m not going into politics, in all the countries where I have lived until now, I was able to keep myself spared from that. It doesn’t mean I have no opinions, I simply like to keep those to myself.

In Winnipeg, over the years, many new buildings have been built and stand together with the old ones. That gives for some nice photographic opportunities. 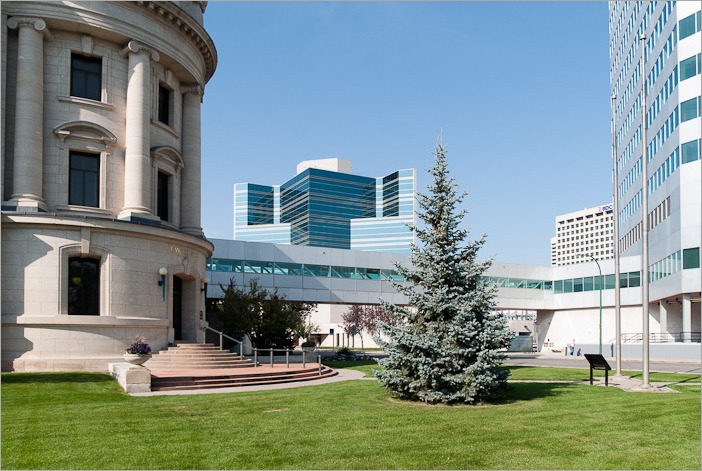 The old and the new

When the old is well maintained and the new well built, things might come together. Around the Legislature this is the case. Broadway is also an interesting mix of old an new.

The “art” of putting this together is something that is particular for every city. In my hometown in Holland, black glass facades are mixed with the 400 year old stone buildings around them. They say that these styles mix very well. Some day I will post some pictures of that. At least here in Winnipeg the styles of the buildings, although very different, do not exclude each other. 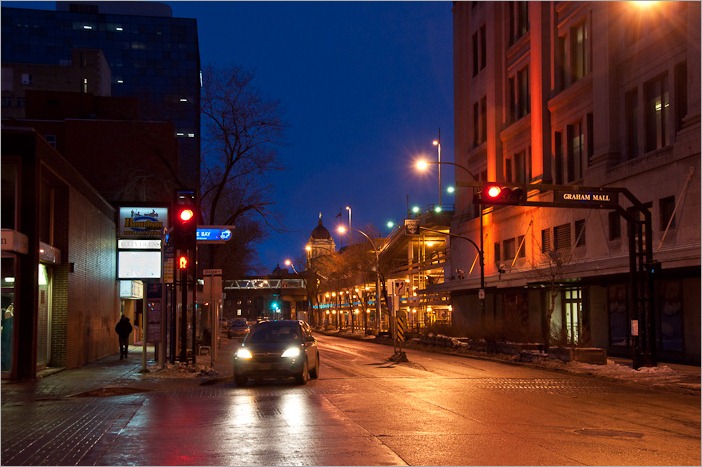 Here the different styles seem to work together and create a strange mix. Of course people will disagree with me, but there is no way someone is going to live in a 150 year old city with all the original dwellings still standing. Nor is that same person inclined to live in a glass and concrete environment. Some concessions have to be made. 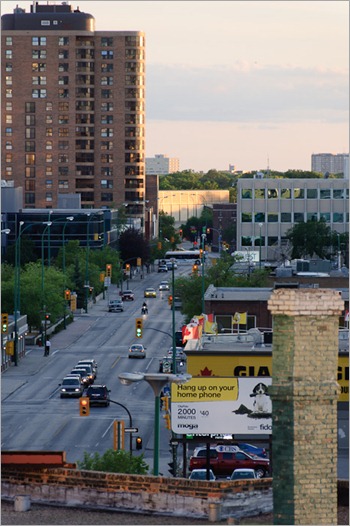 Therefore everything must work together to make the city a liveable place. Most cities, however, prefer to have an “old city” and a more modern part. They keep the old buildings in a (more or less) usable state and try to get companies to rent them. That often ends up with old buildings being only offices and a city centre that looks like a ghost town after 5PM. 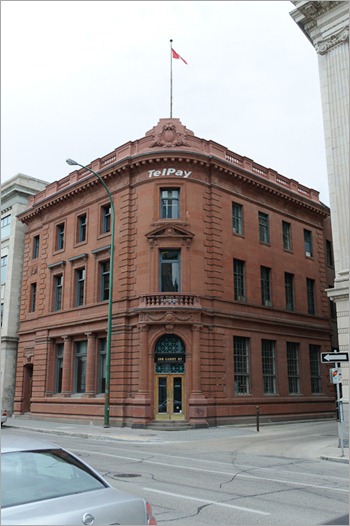 Another example of a converted usable building

Here in Winnipeg we don’t have that kind of a “museum downtown”. Here everything is used. Whatever is too old or too expensive to maintain will be destroyed and replaced with a better version. Winnipeg is also a city where you can get every style in one picture. Great for photographers. 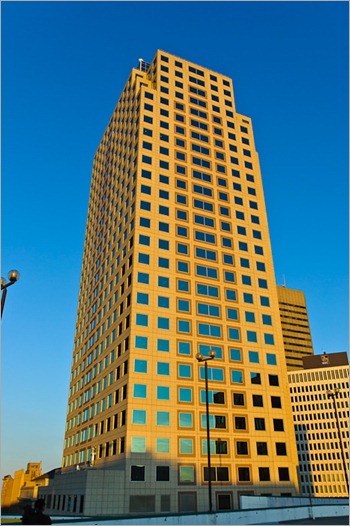 Of course there are also exceptions. Some buildings simply don’t fit in with any other. I guess that every city mayor or urban development community has to learn what goes and what not. Winnipeg is no exception here. 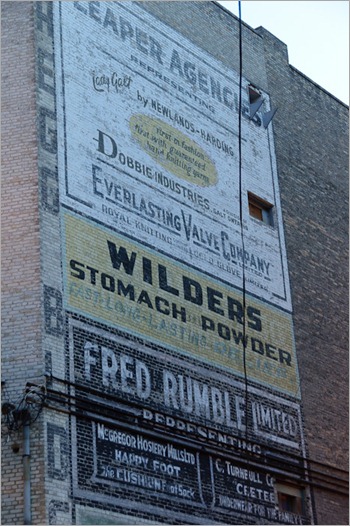 What is a very pleasant exception in Winnipeg compared to any other city where I have lived is that the old buildings do not get tagged with graffiti. At least not with the simple graffiti stuff. While downtown is a great place for renewal, some of the old murals are still there. More modern Winnipeg murals can be found in this excellent collection. These murals are new, fresh and are maintained by their original artists on a regular basis. 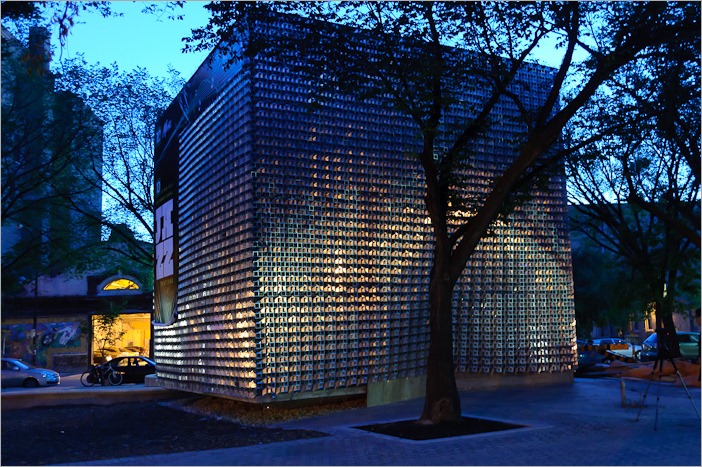 But, like every city there are also surprises. This “cube” is placed in the old downtown. While it does look as if it has no function, this is not a fixed structure. Its function is simply to be a stage for musicians. The sides of this cube are mere aluminum curtains and can be opened and closed at will. The shiny aluminum elements will reflect all the stage lights in a very pretty manner. 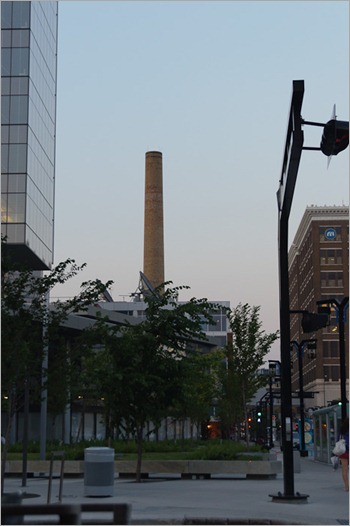 And what about the evenings? Well, if you want to get out downtown in the evening, you’d better know where you want to go. Otherwise you may wander around, look at everything and come home not having been where you wanted. Here, we ended up having a cup of tea downtown. As you can see, a smoke stack, warehouse and modern Manitoba Hydro building are all in the same picture. The best thing was sitting outside without having to break our vocal chords to outshout the traffic… 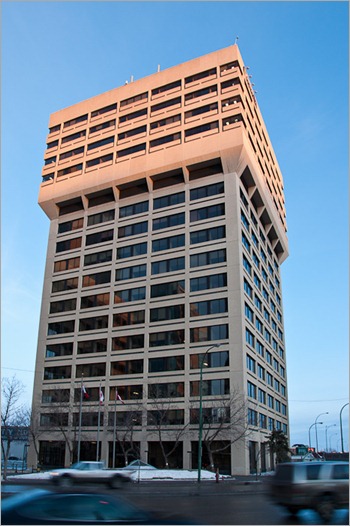 Unlike the early buildings of the beginning of the last century, the new buildings stand mostly alone. The old ones often were leaning one against the other, trying to get stability. Many of these older “parasital” structures have been destroyed, leaving only the healthy buildings. 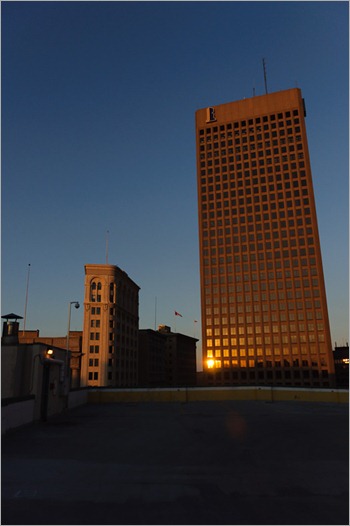 And that’s it for a small walk downtown. These pictures have been taken in different times, obviously. But all can be seen in a walk of around 2 hours. You will want the tea/coffee or other refreshment at the end of the walk though.

All I have to say now is: take that walk and look around, and look UP, there is more of the old stuff to see in the higher parts of the buildings.