“Is it safe?”  - “Yes, completely, utterly safe!” Ah, that’s more like it. Yes, the not-even-close-to-a-marathon photo walk this morning was completely safe. Except, of course, for those who wanted to show off they were more acrobats than photographers. Let’s leave those out of this story though… 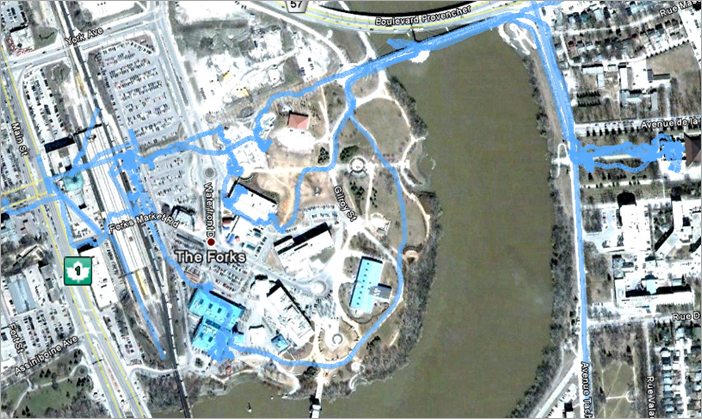 When I first heard of the World Wide Photo Walk, I promptly forgot about it. Until it popped up in my view only a few days before the date of the event. World Wide, yes… even as far away as Sydney, the Photo Walk was to be held.

Happily we didn’t have to walk to Sydney from here, though…

Pictured above is the region that we were walking in. Obviously a lot less than a marathon. It started at 8:15 AM, in a fairly fresh morning temperature. We were warned that the day was to become hot, but I had difficulty believing that. After all, the weather in Manitoba is as we were used to it all our lives: unpredictable, even on short term. 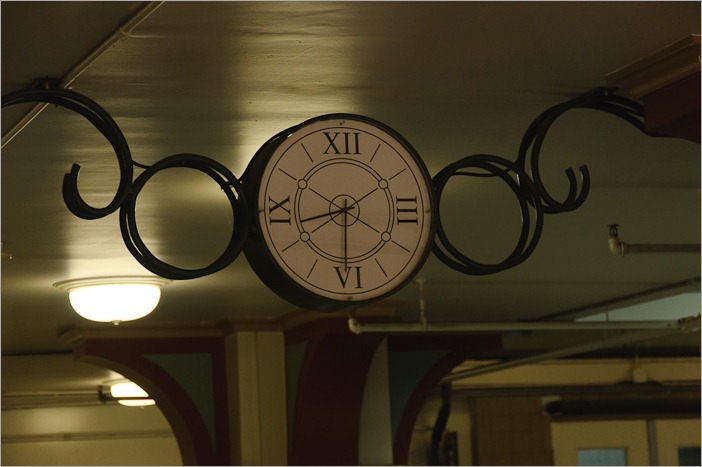 On time, as is to be expected in a station

After a little introduction by our walk leaders, we went into Union Station, an old train station that is still beautiful, even if it has seen more glorious days. As you can see, the introduction took about 10-15 minutes.

Once inside, there was an opportunity for those who wanted to try out some different gear. My D90 is equipped with my walkabout lens 18-200mm with Vibration Reduction. A nice lens, but when I got the chance to use a 10-20mm, I thought it was too good an opportunity to pass.

The Hall of Union Station that had until now eluded me, became fully viewable. 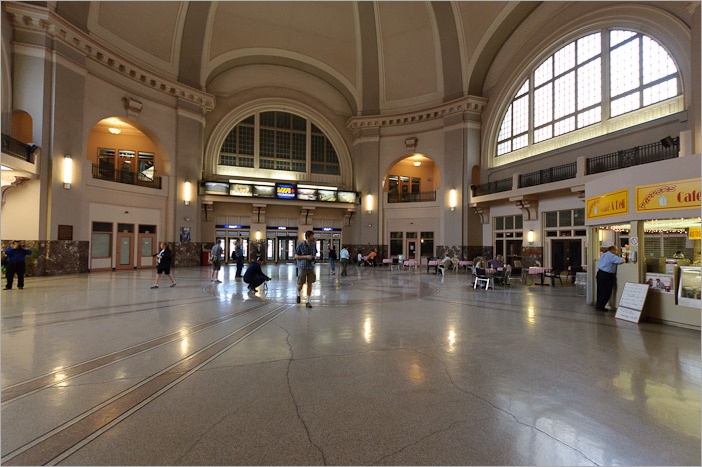 Nice for inside, this 10-20mm. I guess I will put this on my wishlist. It will be Christmas in a few months, Santa will know of a gift for me.

Of course this new lens needed a bit of practice, it’s not as if you put up a small 50mm prime and just click away. I’ll pass on the not so presentable pictures. 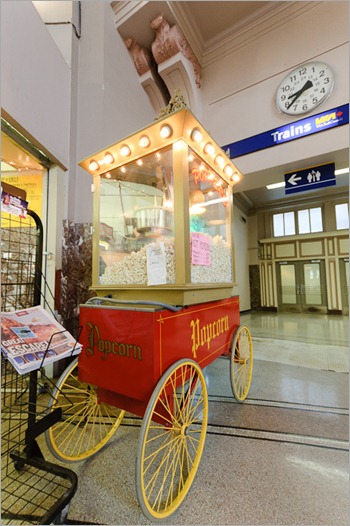 At first I was placed about 5m away from this popcorn cart, but I noticed that with this lens, the cart would be barely visible in the frame. This picture was taken not even 60cm away !!! Hmm, takes some time to get used to. 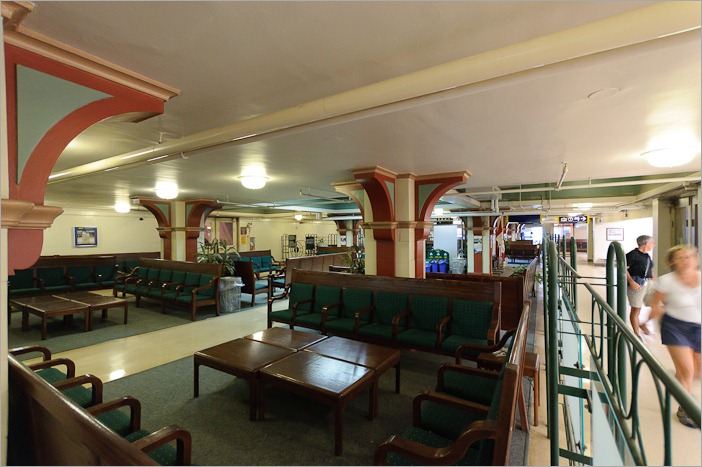 Going back through the station to the place where we had come in, I couldn’t resist the view of the fairly old-fashioned and beautiful waiting hall. A bit empty, you would say, but Union Station only sees one or two passenger trains a week nowadays. And yes, the blue specks far away are recycling containers, I only noticed them when I looked at this picture at full zoom on my pc. I’m not going to Photoshop them out. 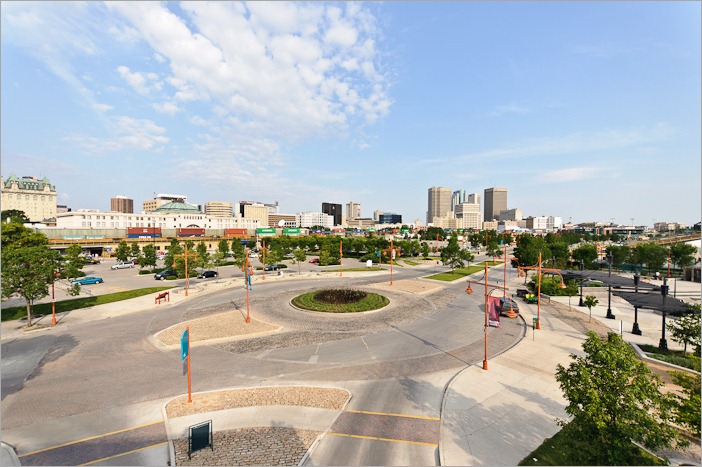 Behind Union Station on a parkade at The Forks.

Once outside more of the potential of this lens makes itself known. You can still see the trains far away, going over Union Station. More interesting is that this is also most of the Winnipeg Skyline. All in one picture. After the Group photo on the roof of the parkade, we continued to the Provencher Bridge or Esplanade Riel. 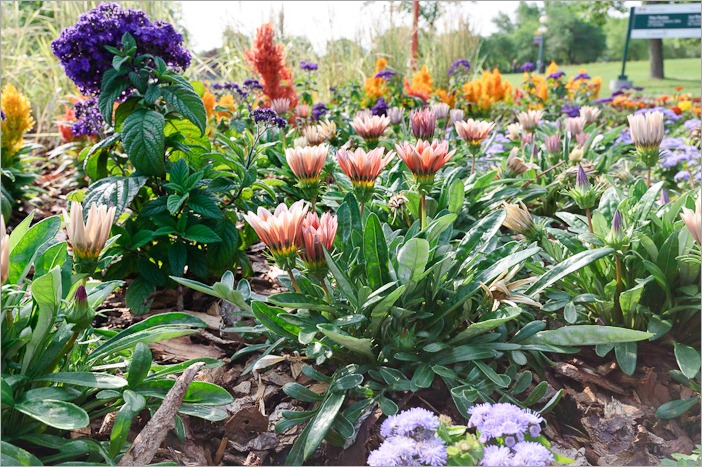 As you already know, I can never pass on the possibility of taking picture of nice flowers, wild or not. This picture was taken against the sun, so it is a little washed out, the camera was close to the ground. Without checking anything in focus, this picture looks rather nice. Even if next time I will need to check the direction of the sunlight.

There is no way of mounting a sunscreen on this lens, not even a UV filter. Every ray of sunshine gets caught in it …

And as if once was not enough, I tried the same with some spot metering on Winnipeg’s most famous bridge, the Esplanade Riel. 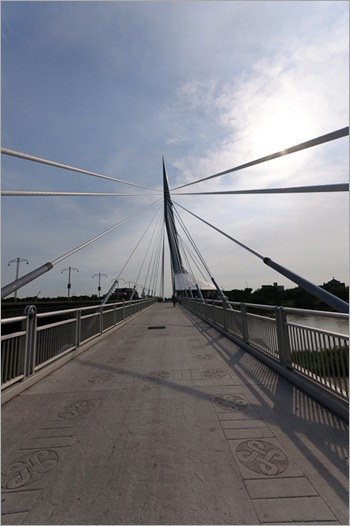 With the sun in my eyes

Followers of my Flickr stream will know this bridge by heart, even if they are not in or from Winnipeg.

Ok, I’m being a bit lyric about this lens, but it gives a LOT of extra possibilities that I didn’t have before. 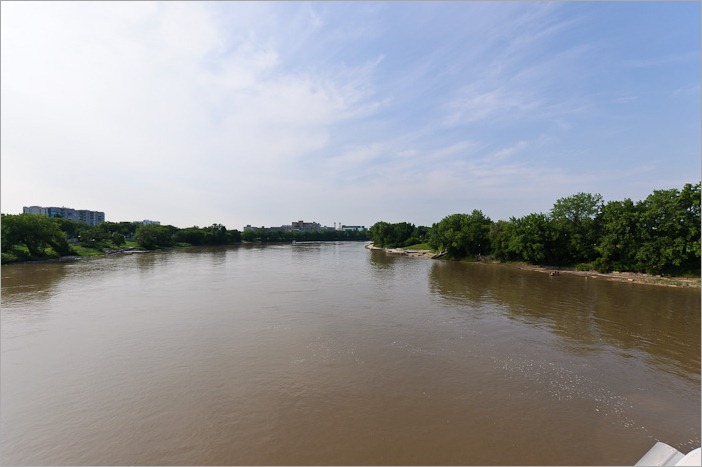 A view from the bridge

The view from the bridge would have been a lot better if I had been able to mount a polarizer on the lens. However, the wide angle of it would show immediate vignetting, something I’m not a big fan of. So, here is the Red River, with glare and mud. 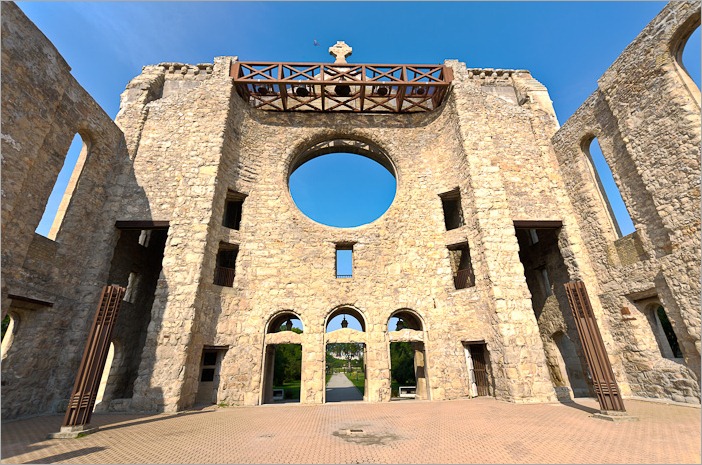 On the other side of the bridge we found ourselves in the French quarter of town. All the signs here are first in French, then in English. Funny that I should notice this.

A picture like the one above is not possible with a 20mm or 18mm as I have it, 10mm really does the trick.

St Boniface Cathedral burned down in 1968. The round hole that you see was a huge glass stained window. During the fire, the window exploded, pieces of it were found on the other side of the river. Now it’s not a habit to preserve ruins in town, we can use the space in a better way. However, the St Boniface Cathedral’s facade was also the last resting place for past bishops. Not wanting to disturb them even after the fire, the facade is maintained and the remains of the bishops remain in place. 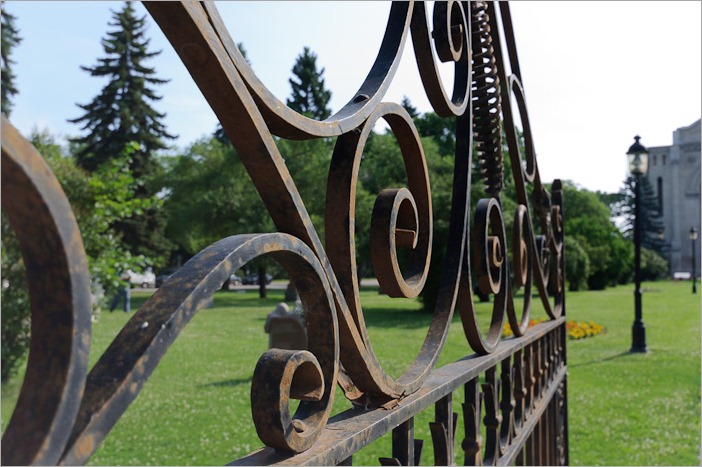 Back outside, there is a big old cemetery. Unlike the European versions, there is no fence around the cemetery, you are free to walk in, whenever you want. This wrought-iron gate is there only for decoration, you can walk around it as well. In the back you can see part of the Cathedral’s facade.

Now, the walk was nearly over and it was time to give back this nice lens. The Sigma 10-20mm F4-5.6 EX DC /HSM went back to its rightful owner. Sniff…

But let’s not forget the wonderful qualities of the 18-200mm.

To catch the dislocated shadow of this young skateboarder, I could not have done without my trusty lens. 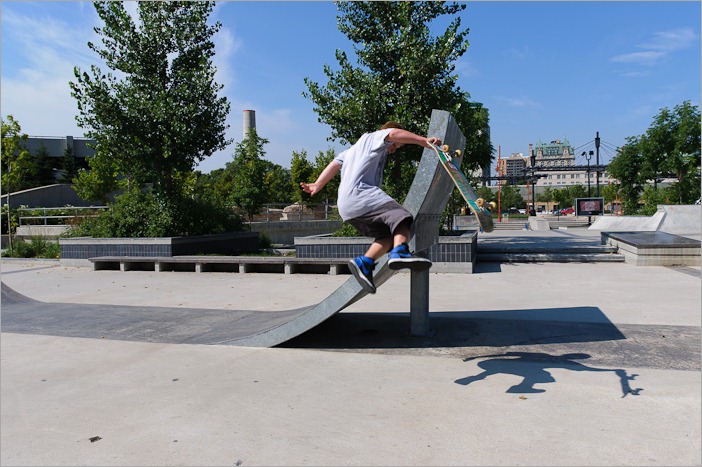 Can I get my shadow back?

Winnipeg is the first city in Canada to sport a full-blown skateboard park. Other cities have now followed, using the same design. However, one of the skate pits would have been even more wonderful if they had filled it with water and made it a swimming pool. By the time we finished the photo walk and said goodbye to the walk leaders, the sun had gotten hold of the day and by 10:30 AM we were happy to find some shadow.

Shadow I used to take this picture from.

Not so much a marathon, merely a stroll, and completely safe. Next year I will definitely do this again, wherever I may be in the world at that moment.