Horror at the zoo

Every year, the Assiniboine Park Zoo holds a “festival” just before Halloween. They call it “Boo at the Zoo”. It’s a fun time to go at the zoo as well as the only time you can get there in the evening hours. Of course, the theme is Halloween and the skeletons, ghosts and ghouls welcome you with all their absent hearts. 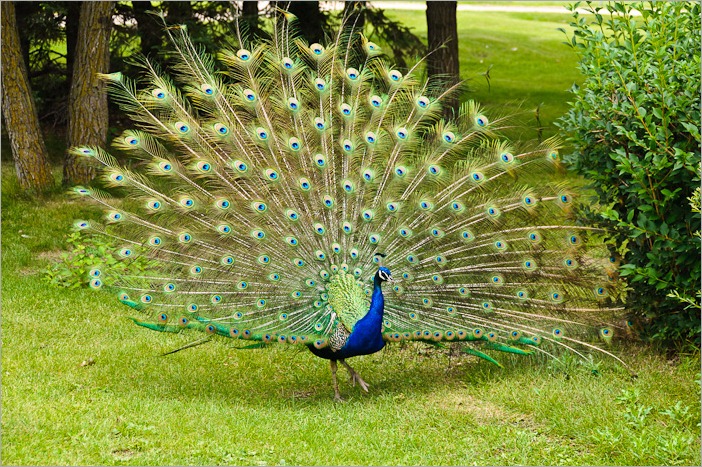 Free running peacock in the zoo

On the 1st of July or Canada Day this year, I went to the zoo and found that my only “worthy” or viable photographic subjects were the visitors. So, to give a more accurate image of the Zoo, I went there again…

but on a rainy but warm day. I discovered horror for the animals in the zoo…

You might think that the most horrible thing that can happen to the free and wild animals is getting caught and being transported to a zoo for the rest of their lives. Maybe so, but in the zoo they do not have to fear anymore for their food, or absence thereof.

The animals are quieter and easier to approach. Don’t get me wrong, you will still not go and cuddle the snow leopard or the funny looking “teddy” bear. No way. The lynx and the crocodiles have not lost their instinct or appetite for you.

But they are quiet and you can look at them, from a distance. 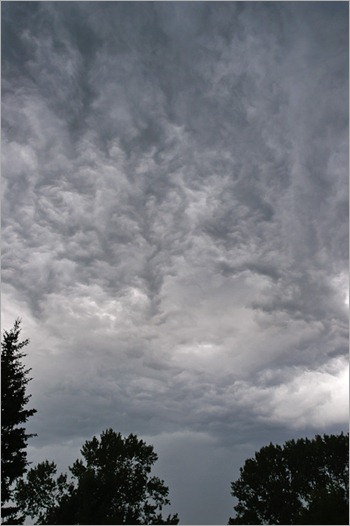 When I got there yesterday, the zoo was nearly empty of visitors. Perhaps the sky was part of the reason why this was so. It was seemingly alive and very menacing. No rain, except a few splatters. However, it was laden with electricity. The animals felt it, that’s for sure.

As humans we have lost that kind of feeling when the air is electric and ready to burst.

Once the thunderclap arrived, the animals simply went “crazy”. Even the safety of the zoo and the keepers could not keep them from screaming out loud.

After the first few thunderclaps, it was time to find some shelter, rain started to come down heavily, mixed with dime sized hailstones. Nothing like the golf balls that were promised though. I took shelter in the “Tropical house”. 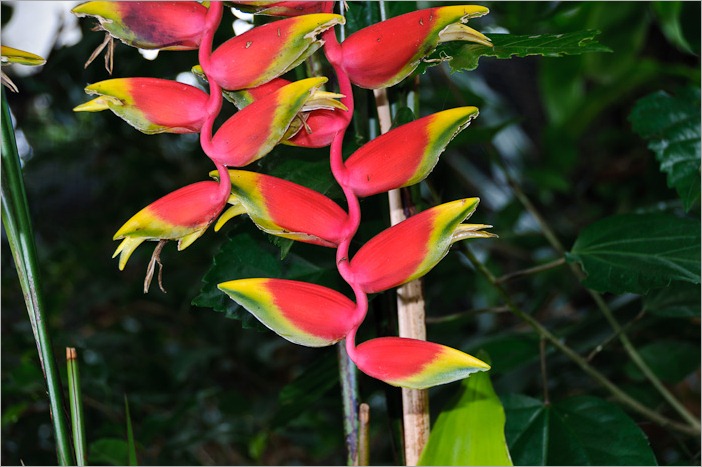 Although flash photography is not allowed in most indoor places, the plants don’t mind and make for good colourful pictures. 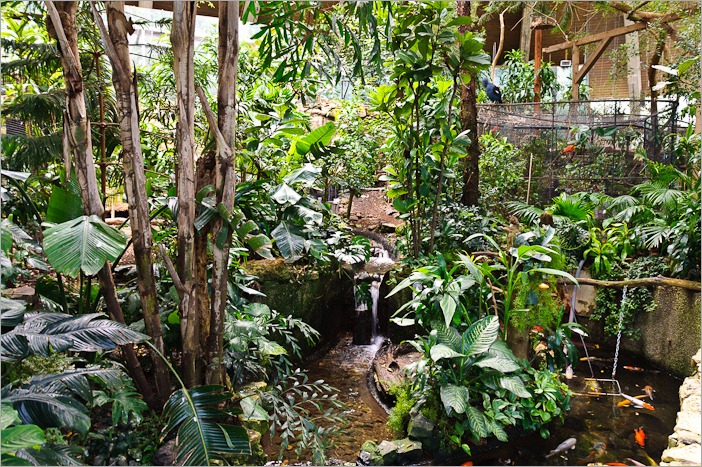 The tropical house has many occupants, most of whom required an elevated temperature year-round. I guess that crocodiles do not survive very well at –40C, they simply don’t know what to do, other than freeze. 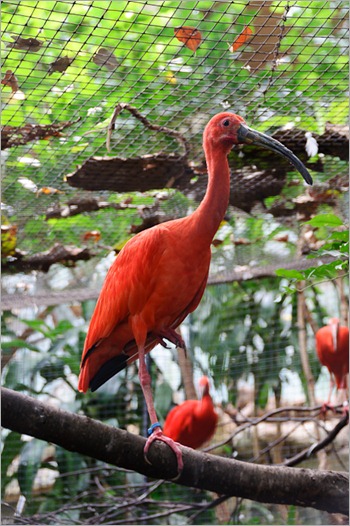 Taken through the bars

The birds were pretty quiet, despite the thunderstorm outside. They made for nice subjects.

In a zoo, the bars and wire mesh are the enemies of the photographer. But sometimes there is a way to make the camera work for you and click through the mesh as if it didn’t exist. Find an open space in the mesh and set your aperture at the biggest. Approach the mesh as close as possible. Now your depth of field will work for you by blurring the mesh and making it nearly invisible. 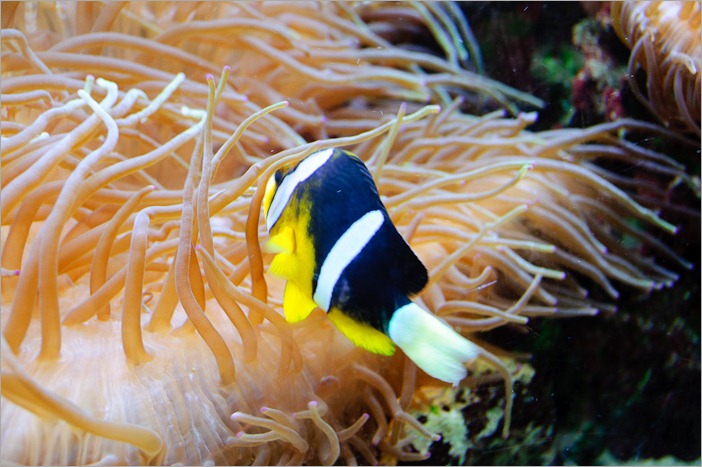 The aquariums are a different challenge. Of course you will not find a hole to stick your lens through. The glass is often dirty enough to barely see what’s on the other side. Here the trick is to get as close as you can to the glass, shield reflections with your hands or a t-shirt and click away.

Like I already said, flash photography is not allowed, the animals would go crazy and die after a few days of happily clicking visitors. So, the flash stays in the bag. That leaves you with higher ISO and big apertures to get a decent picture. The glass is a good stabilizer for your camera, just don’t tap the lens on it.

Fish and aquariums have an additional challenge. Most of them have neon lights above them with various colors. The clownfish above has striking colors. If you swim with them in the open sea (I did, long ago), they nearly light up, so bright they are. In an aquarium, there is no sunshine. The light is dim at best. So the neon lights are there to make up for the lack of sunlight. 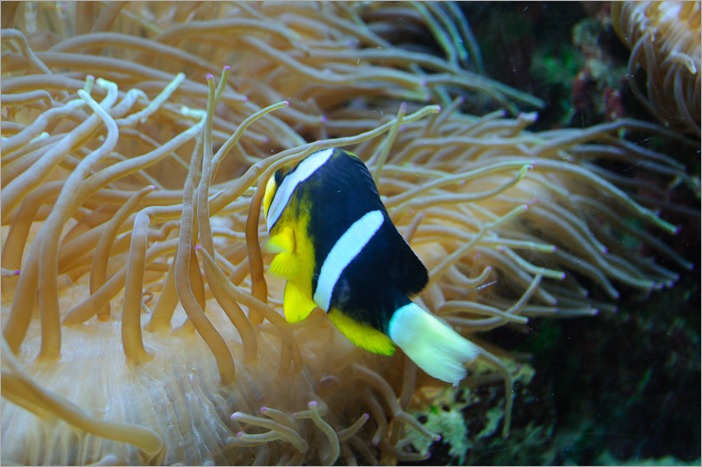 The eye can take care of the colour cast, like it always does. We see the image as the first, the camera as the second. The camera records whatever it senses, no changes made. As you can see, the colour cast is blue underwater and has to be corrected. In this case heavily corrected.

After a while, the thunderstorm subsided, the rain was gone, the hail melted and… so I could go outside again without putting my gear at risk.

The animals were relieved that the thunderstorm was over, no more screams of horror and terror.

On my way out of the zoo, however, a small animal that simply takes the place for itself without asking seemed to blame me for the uproar in the sky and couldn’t help itself to scold me. 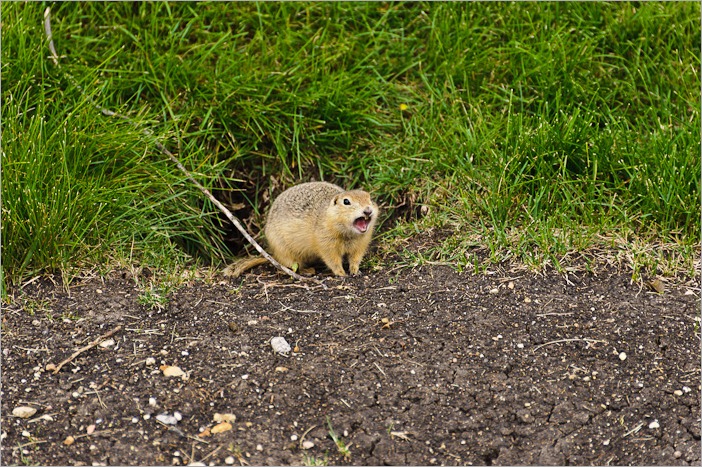 Don’t yell at me

But I was not guilty, the little groundhog didn’t come closer. I guess it understood that I was good enough to calm its nerves on, but too big to do anything more successful than that.

A nice day at the zoo, this time with animals as subjects. Walking quietly and slowly among the animals gives the best photo opportunities you can think of.