A weekend at the lake

Since the moment we were here in Canada, we have heard how people spent their weekend “at the lake”. It is obvious that in a country where there are thousands of lakes people spend the weekend at the lake.

It also helps if you have a car, a map and a good address to go to. 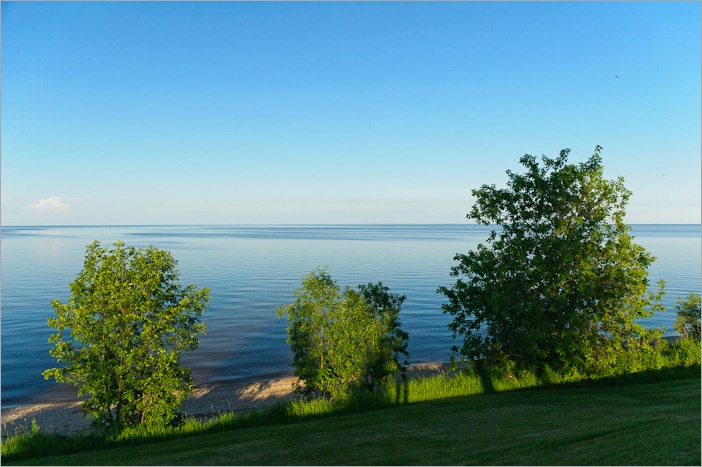 Since I have passed my driver’s license here in Manitoba, I can drive any car I like, although for rental sakes I have to stay in the province. At first sight that looks rather restrictive, certainly if you come from Europe. There, often a province is hardly bigger than the city of Winnipeg, give or take a few square kilometres. Manitoba is roughly the size of 1.5 times France or Ukraine.

Spending a weekend at the lake here would mean either Lake Manitoba or Lake Winnipeg. At least to outsiders. I suppose that that is a problem of the maps they teach in school. In Manitoba alone, there are hundreds of lakes, all with different qualities and touristic attraction.

This time, we chose to go to the Misty Lake Lodge, just north of Gimli, MB. The place is a lodge-type hotel, where you can rent a lodge (obviously), suite or a simple room. All is ground floor, no escalators, lifts or stairs to climb. 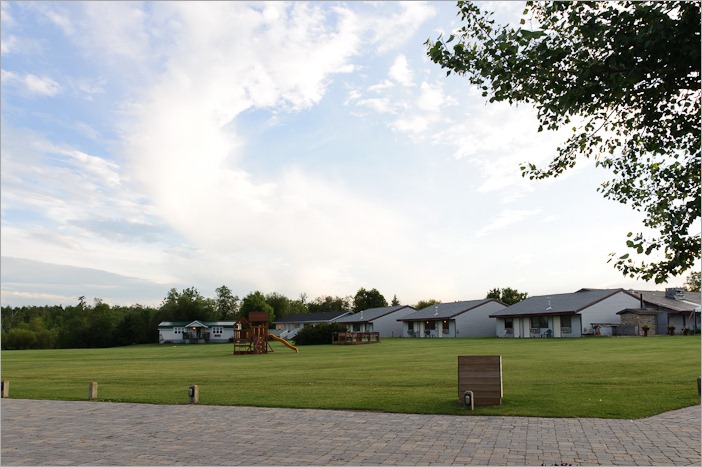 Unless you want to go down and get your feet in lake Winnipeg.

When we arrived on Friday evening, everything was calm on the water, the sun was shining, the birds singing, the mosquitoes biting…

Ok, I’m not going to complain about the “provincial birds” as they are called here, I also had bug spray and that worked fine.

One of the more surprising birds here are pelicans. I though they only lived in warm places, but here too, there are a lot of them. 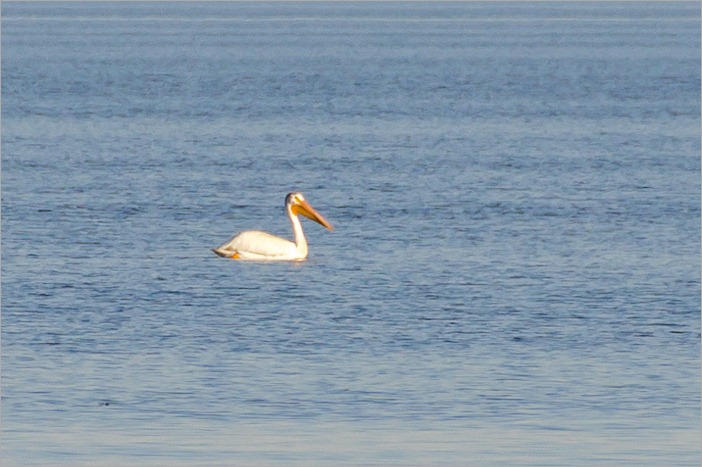 The ones that had a great time with the mosquitoes were the dragonflies. I tried to catch a few on photo, but they were very fast. They show up in different pictures looking like sensor-dust, but they really were dragonflies. 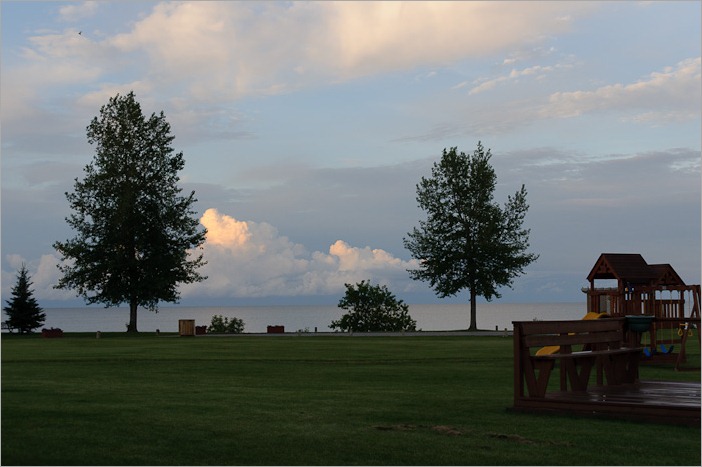 Friday night, the promise of rain

On Saturday the weather didn’t cooperate very much and most of the day was cloudy, with a few drops here and there. The car we rented was a good one, a Chevrolet Impala, the executive kind, with all options, bells and whistles so rain or wind did not bother us. 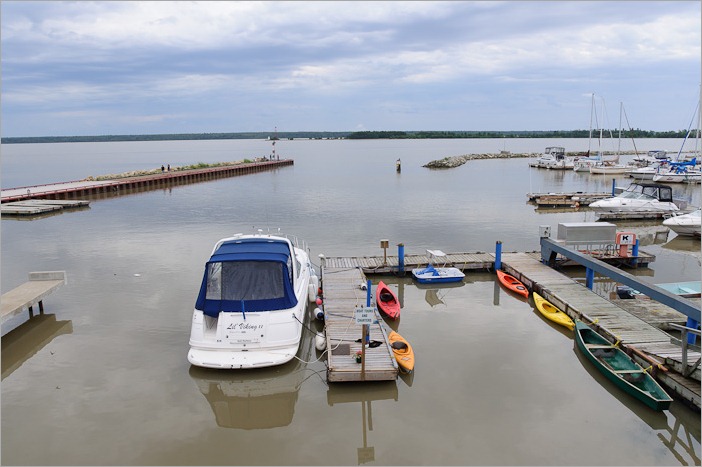 Murky water, due to lots of rain

So, on Saturday we went out and decided to go to Hecla Island, an ancient Icelandic community on one of the islands in Lake Winnipeg. Lake Winnipeg is large enough to have tides and islands, just like the oceans and the seas. The tides are only a few inches, but tides nonetheless.

The north point of Hecla Island is called Gull Harbour. There were gulls all around, nice and quiet. Probably there was no more rain and wind in store, otherwise they would have been screaming. 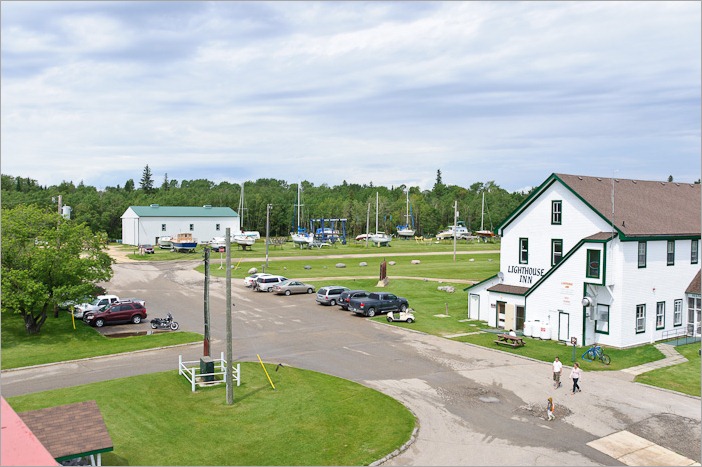 Gull Harbour is what it says on the tin, a harbour with gulls. And boats of course. Every spring the boats are put in the water, every fall they are taken out. Last winter we went here too, but there were no boats in the water at all. Lake Winnipeg is about 20 meters deep at its deepest, in winter it mostly freezes shut. Boats would have a hard time not to get crushed by the tremendous force of the ice. 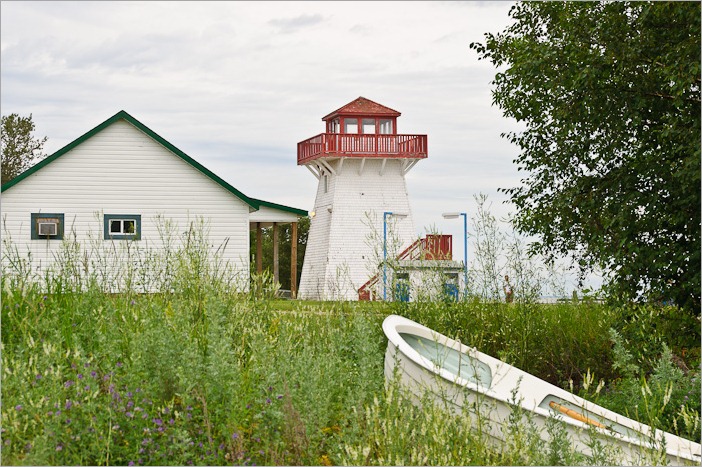 Gull Harbour also has a lighthouse, although today a beacon is set just outside the harbour. Now we can visit the lighthouse and take pictures from the top.

Here too the dragonflies are huge and well fed, I love these insects! The more they eat, the less mosquitoes I have to keep away! 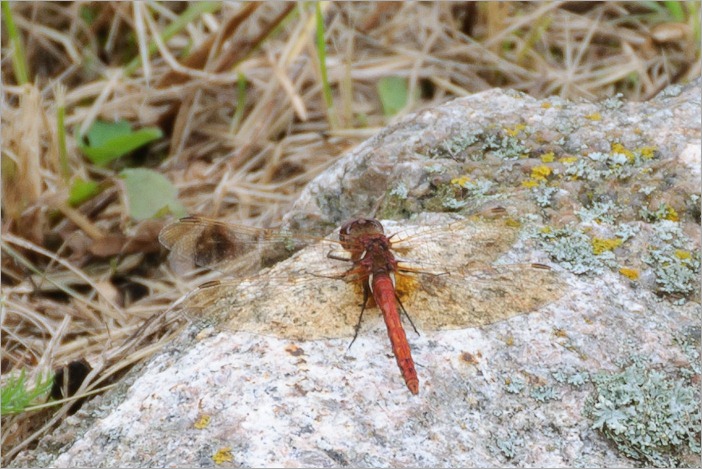 Red coloured variety of dragonflies, this one measures about 7cm, wingspan around 10cm

Back at the Lodge, the evening announced itself gray and wet. Temperatures of around +25C made it still possible to eat and read outside under the overhang of the roof.

Sunday morning was a nice surprise: no clouds and nice warm weather. We decided to go to find a particular mosquito. This one is located in the village of Komarno, MB. Now those who are not familiar with the Ukrainian language will probably not understand the pun, but Komar in Ukrainian means Mosquito. 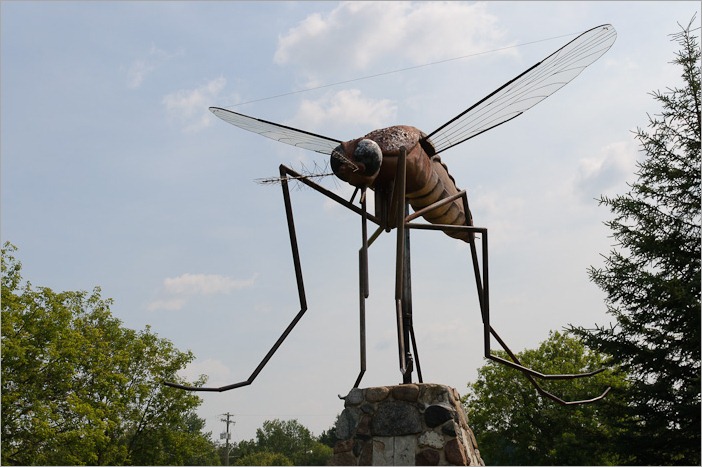 Some people told me in Australia there are spiders of more than 5 cm, well, here in Manitoba we have mosquitoes of more than 4 meters!

Komarno is a village in which settlers from Ukraine arrived a little more than 100 years ago. They created the church, the school and in fact they created everything in self-sufficiency like all pioneers. Until a road arrived in 1919 they were real pioneers. With the road from the south, that period was definitely over. 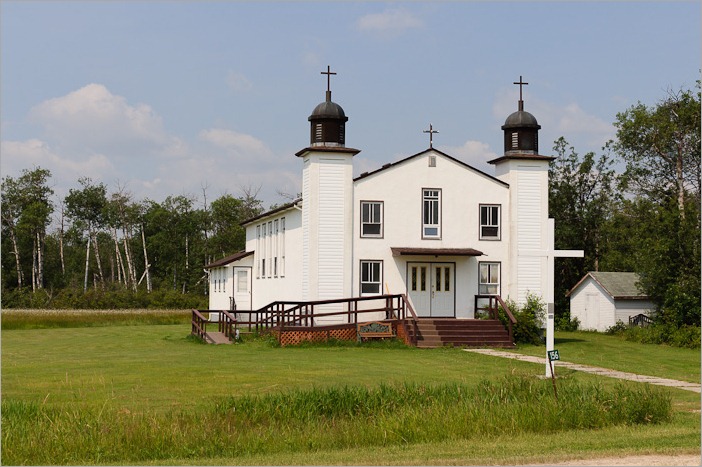 The church is still there, a small cairn describes a short history of the village. The cairn is topped with a lichen or moss covered Ukrainian Catholic cross. 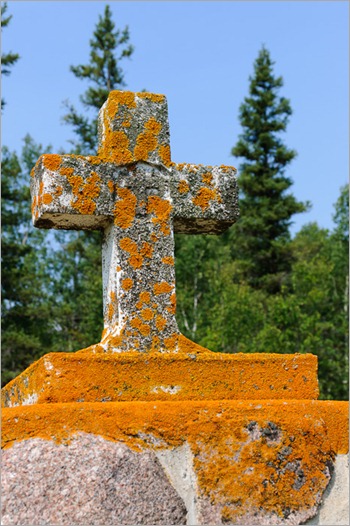 After that, we tried to get to Lake Manitoba, but the recent rains had flooded the area so much that many roads were closed due to flooding.

Lake Manitoba will be for another time…