This is the end of winter. At least we hope for that. Landscapes are now bare and bleak. Hardly what a photographer likes to shoot. “There is nothing to shoot” is a common complaint at this time of the year. 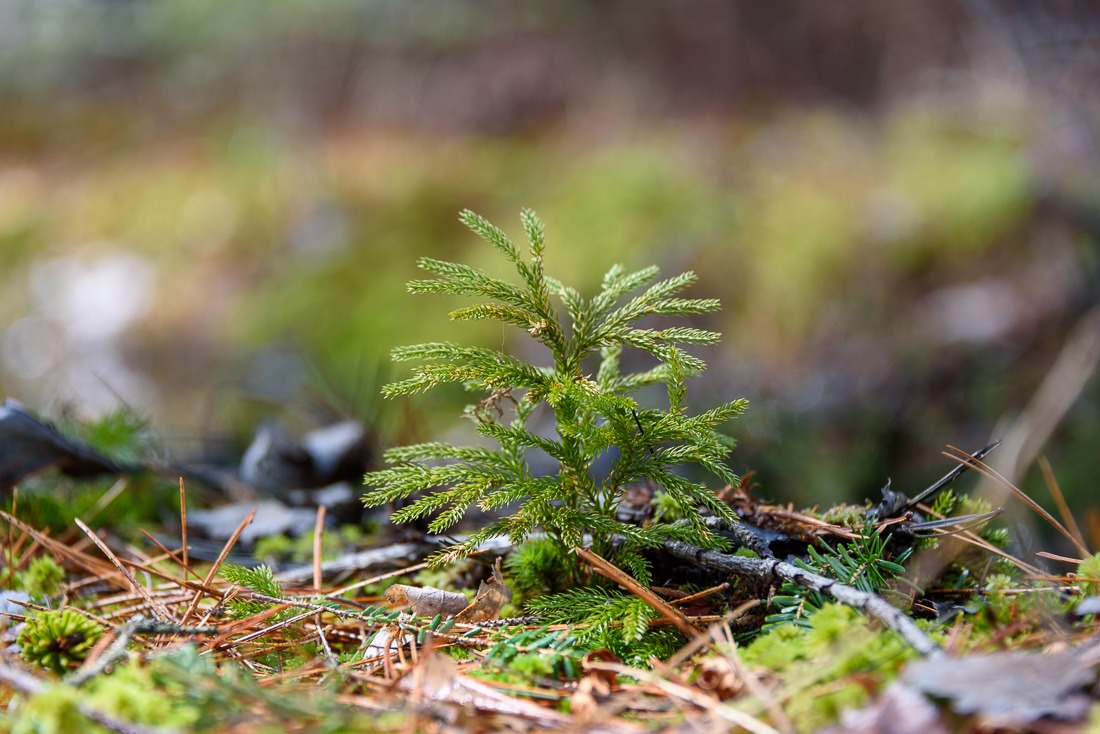 But is there nothing to shoot? I thought the same and started sulking

. My head dropped and I was staring at the ground. Only for a few seconds, because what I saw was the new season coming to life already.

It’s easy to forget that nature is simply taking a rest, to come back stronger than the year before. So I decided to screw on my macro lens, or at least zoom in to the max with the lens at hand and shoot those little marvels that were awakening under my feet. 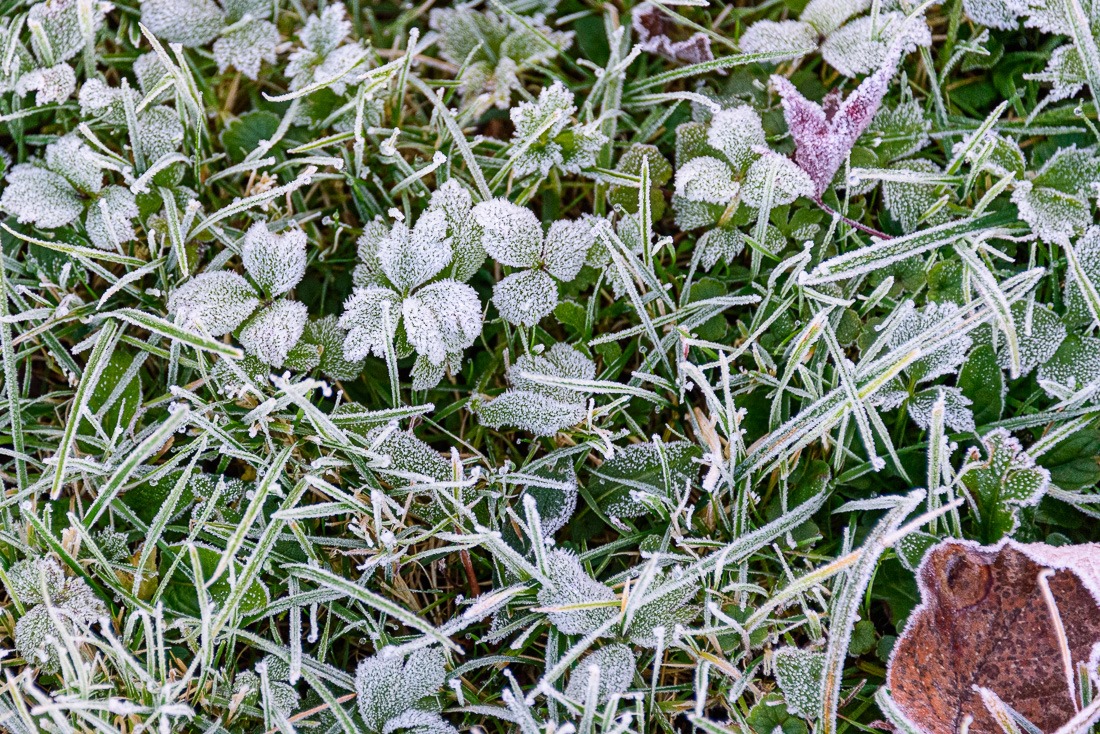 When the winter was just starting, the grass in the backyard was frozen lightly. Of course this will always result in some interesting images. This one shot right between my feet on an early morning in November. 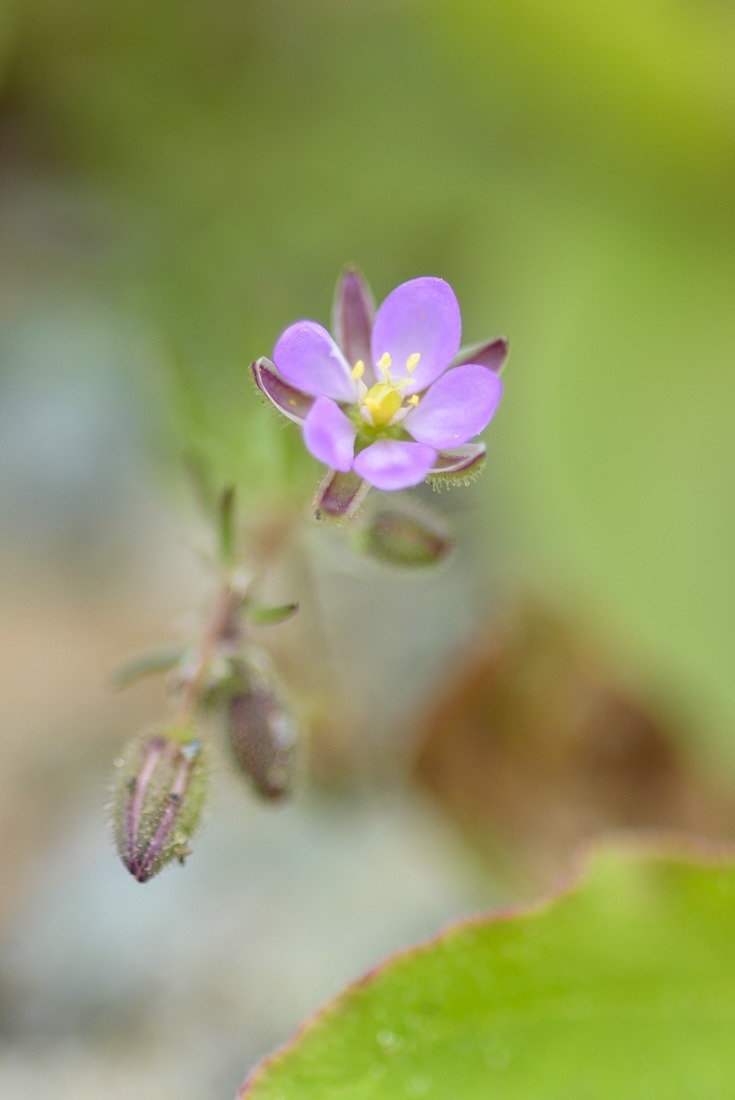 Once I had found my idea for this post, I went out hunting for other images. Some came from my archives of last year, some are recent from this past month. This Red Sand Spurrey above is from last year. 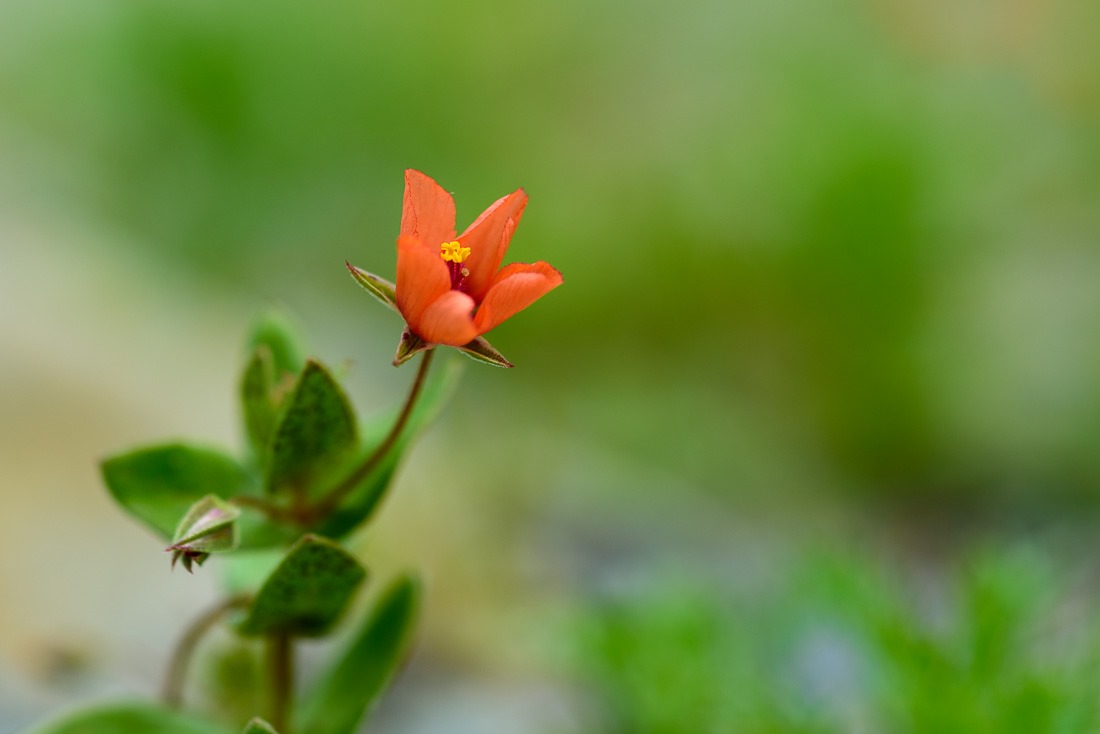 When everything looks bare and dead, it’s easy to forget that there is life preparing for the next round. Sometimes even when it is in full bloom, it goes unnoticed. Like this little Scarlet Pimpernel, a few millimeters high. The lead picture of this post is Clubmoss and it is from last week. A while ago I made a joke that this would become a tree in the coming years. Only to get shot down by a friendly biologist telling me that only if I lived in the Jurassic era, that would have been possible 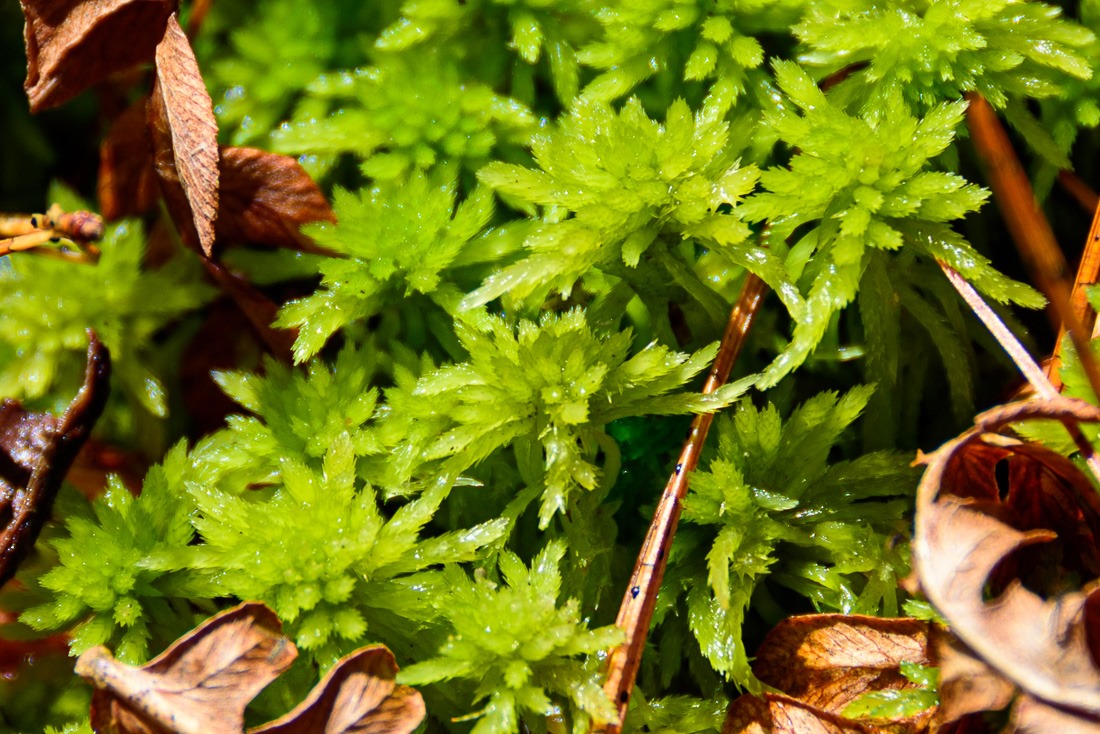 But when you find one kind of moss, there is always more to see. As long as you have your eyes open and are looking for it. Walking on a mossy ground is very pleasant. Even more so if you do it barefooted. The above Yellow Peat Moss is soft and springy. 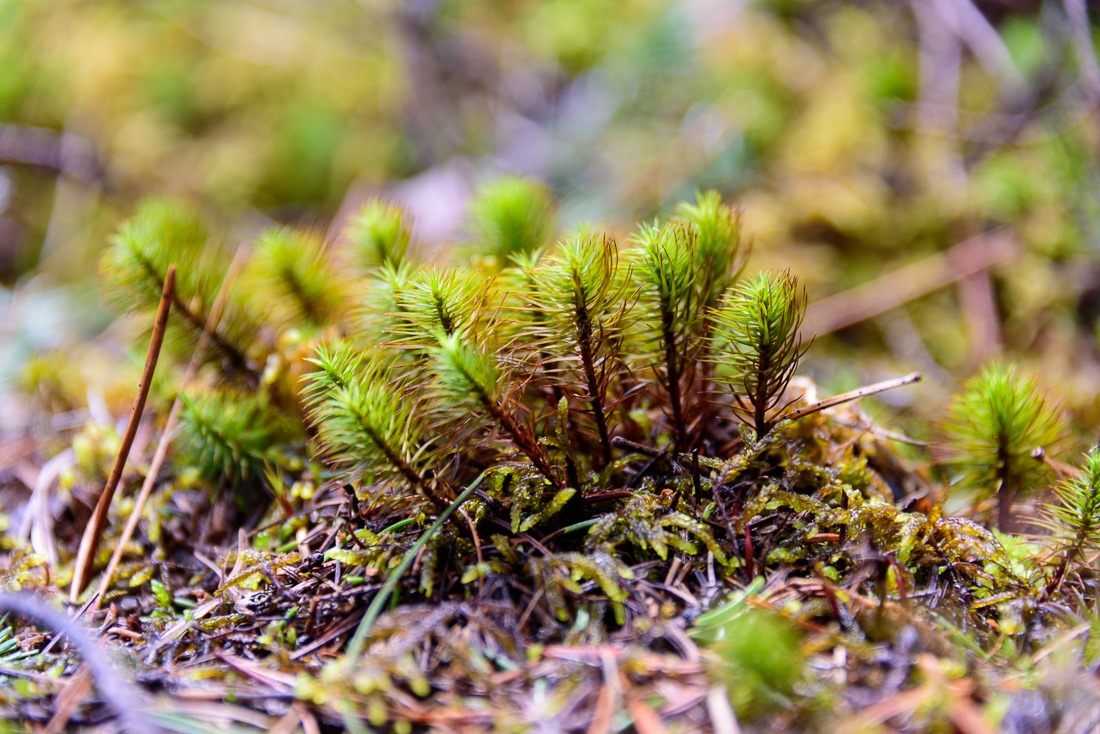 I abstained from walking barefooted, the temps were barely above freezing when I shot this. And honestly, it would be a pity to stomp all over this Bog Haircap Moss, right? 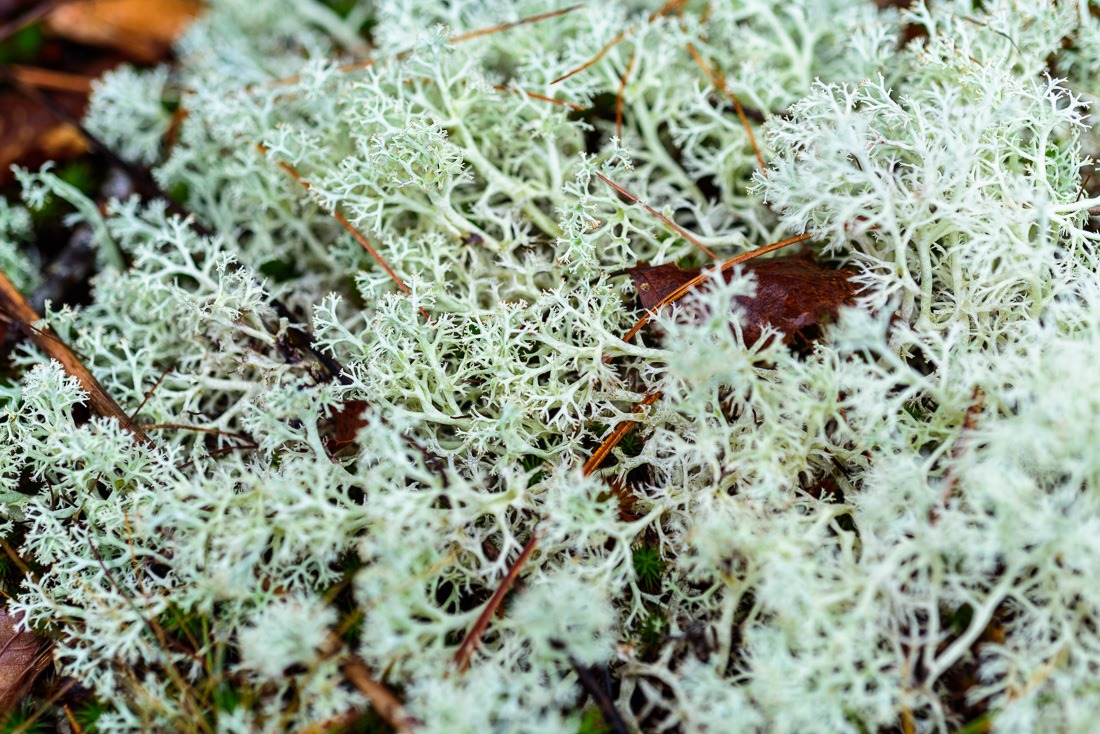 It’s all about looking where life is coming back after a long winter. Lichen is everywhere. In Manitoba, in the tundra and everywhere where there is enough rain or moist to let it grow. Its colours can vary wildly. Sometimes lichen simply looks like rust, until you see that it’s on a park bench. And park benches don’t rust. 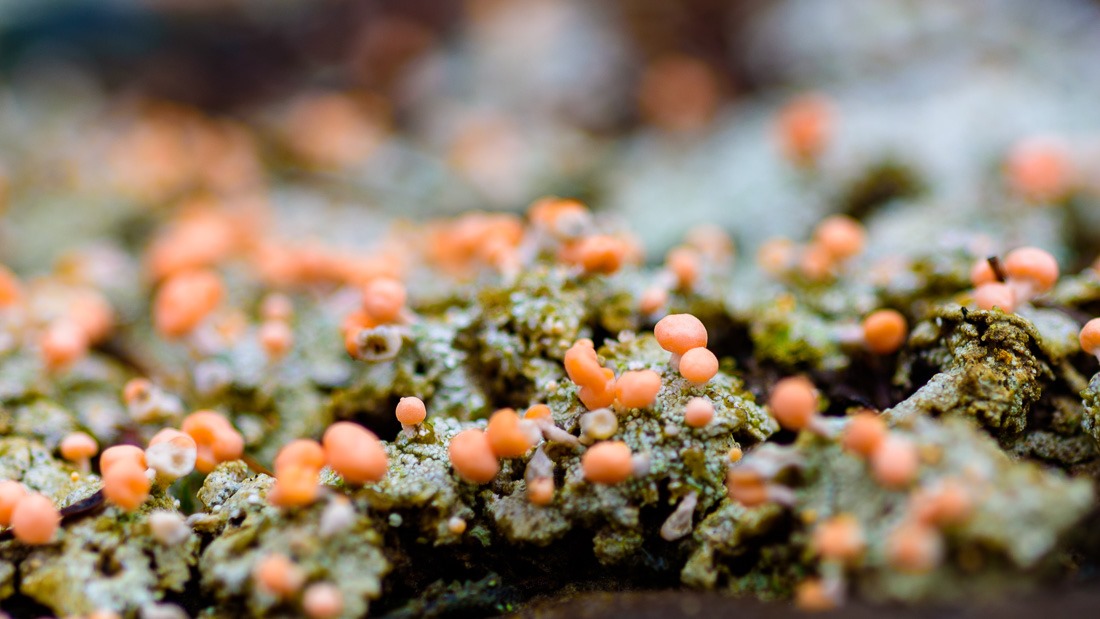 Other patches of colour also start to show up. Above is Pink Earth Lichen (Dibaeis baeomyces). Apparently eating this has a mildly psychedelic effect. I will not be the one to confirm or infirm that claim. This shot was from last January, when winter was “raging” the most, with a mere –4 degrees Celsius. 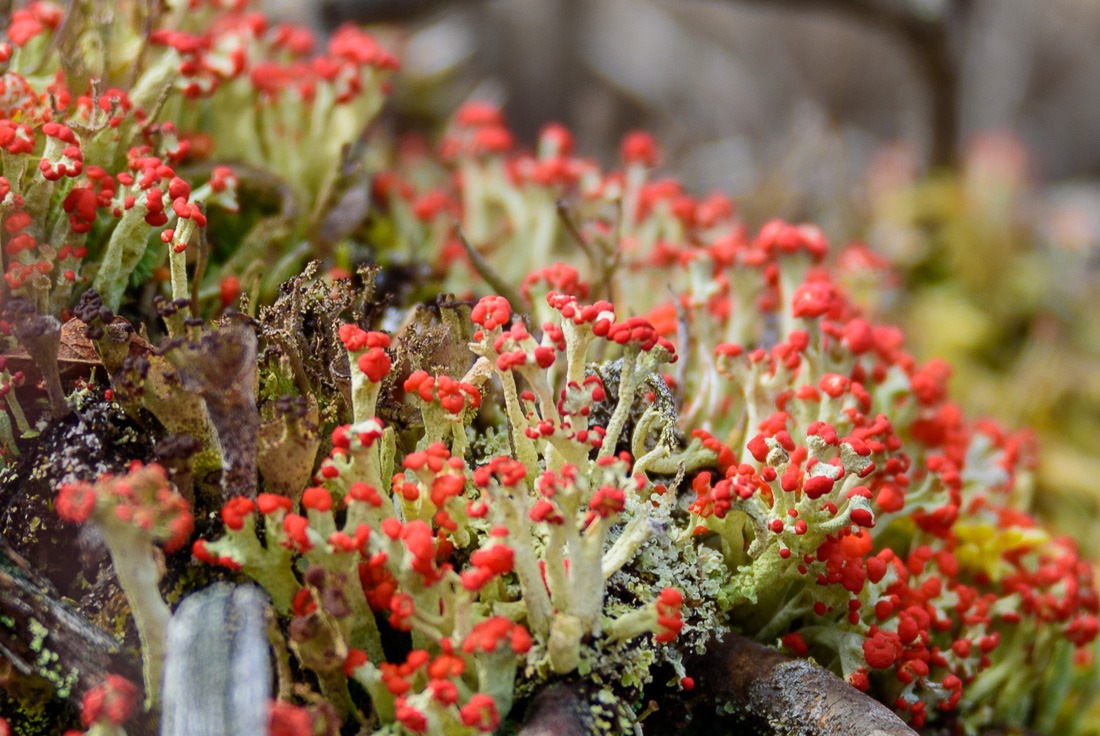 So when I found something very similar last weekend, I went to identify this and it came up as Pink Earth Lichen as well. Yet other people told me this was British Soldier Lichen (Cladonia cristatella). Often lumped together, these two look alike. Superficially. Up close they are very different and are not even in the same family.

If there is nothing to shoot, there is something to shoot. You just might have to look closer. Screw on a macro lens and study the landscape under the macroscope instead.