You have to admit it. Taking pictures in daytime is one thing, but night time changes perspectives. When I still had a film camera back in the good ole film days, taking pictures was mainly a daytime activity. By night it was too dark to either focus or even determine if exposure was going to be sufficient. 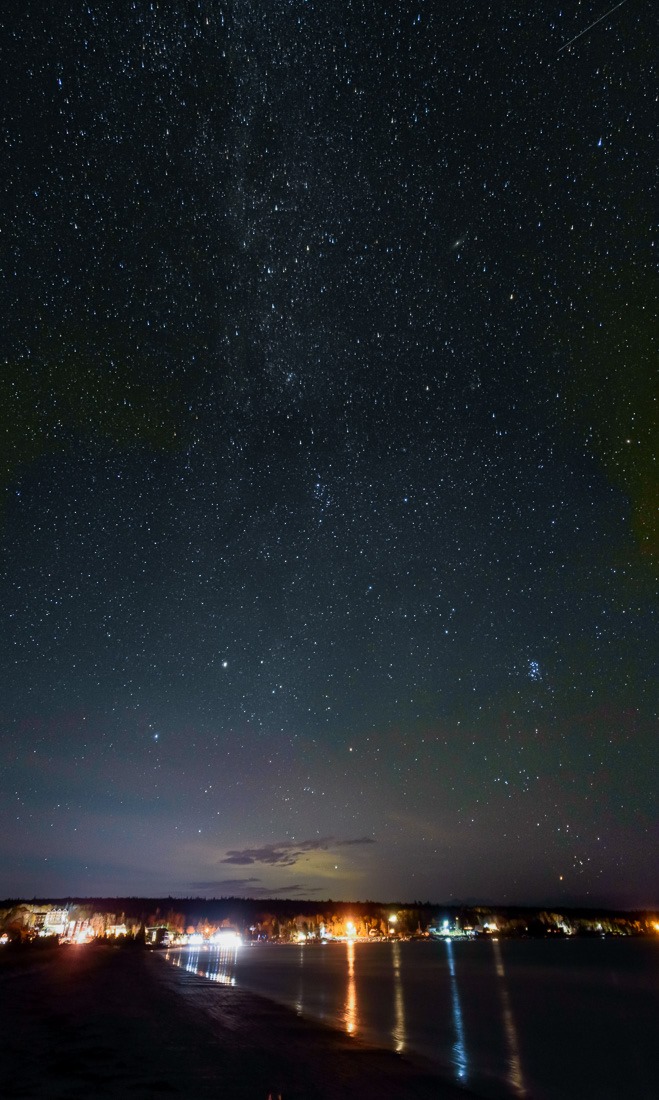 Today, the digital cameras allow us to check that on the spot and, most of the time, to correct it as well.

For a few months now, I have lived in Nova Scotia, with plenty of photo opportunities as well as other media opportunities. Last summer was a bit chaotic as far as activities went, with a frantic search for a house, the subsequent move-out and move-in, then with renovations. Needless to say that outings to nature and relaxation were few and far between. 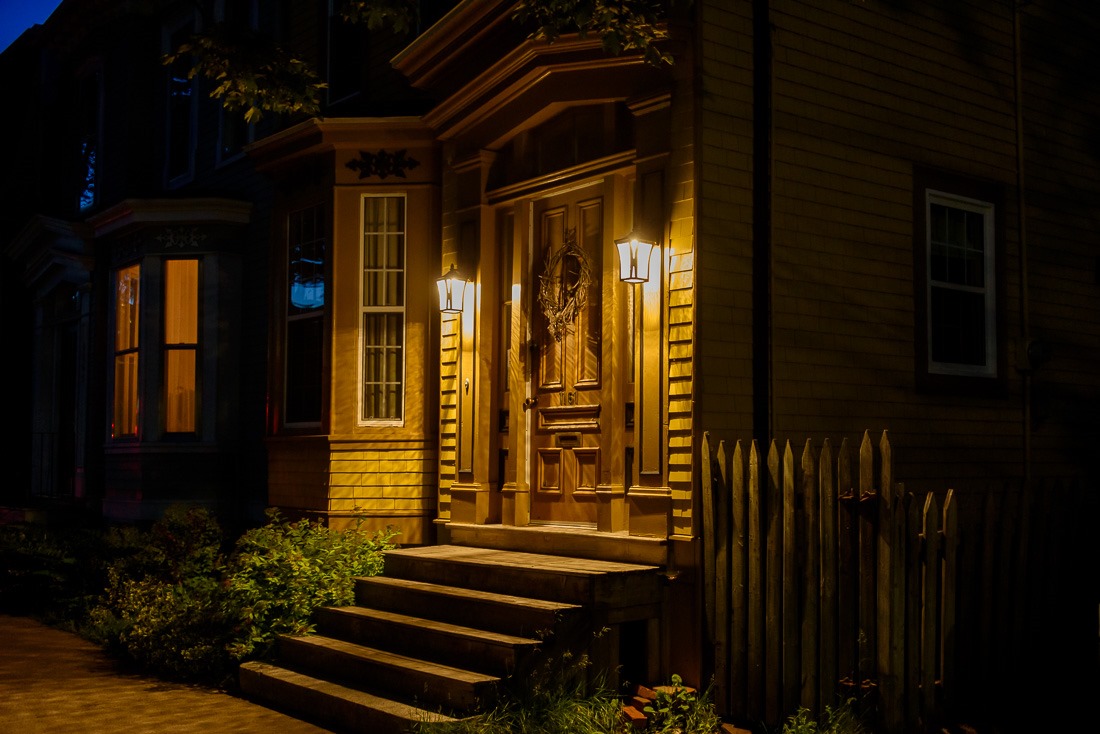 Yet the night time was still fairly “untouched”. Going out during the night may take a toll on your daytime performance, but the rewards are always worth it. Throw in some rain and fog and nights become magic for photographers. 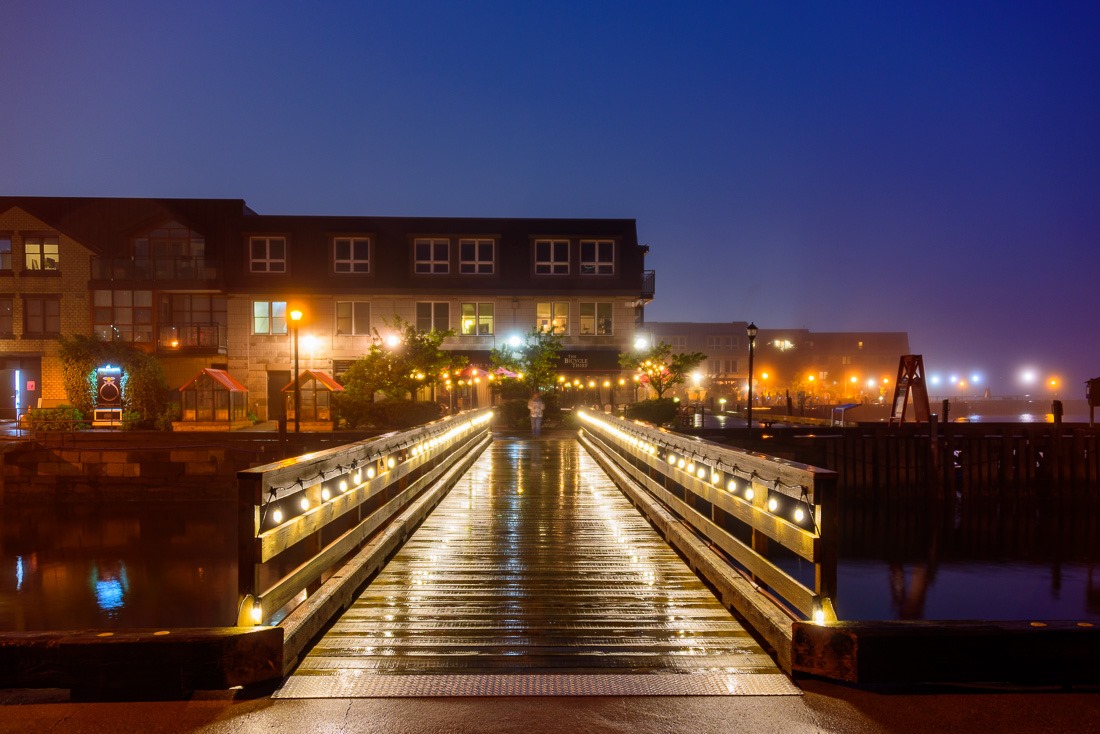 Granted, heavy rain during the night is not very pleasant to work in, but hey, there’s always the choice to stay home, right? A little preparation and the rain will have little grip on the mood. The above shot was during a foggy, rainy night. At first, the fog was pretty thick, but then the rain started and the fog dissipated. Combined with some nice lighting over a wooden walkway, the scene nearly looks golden. 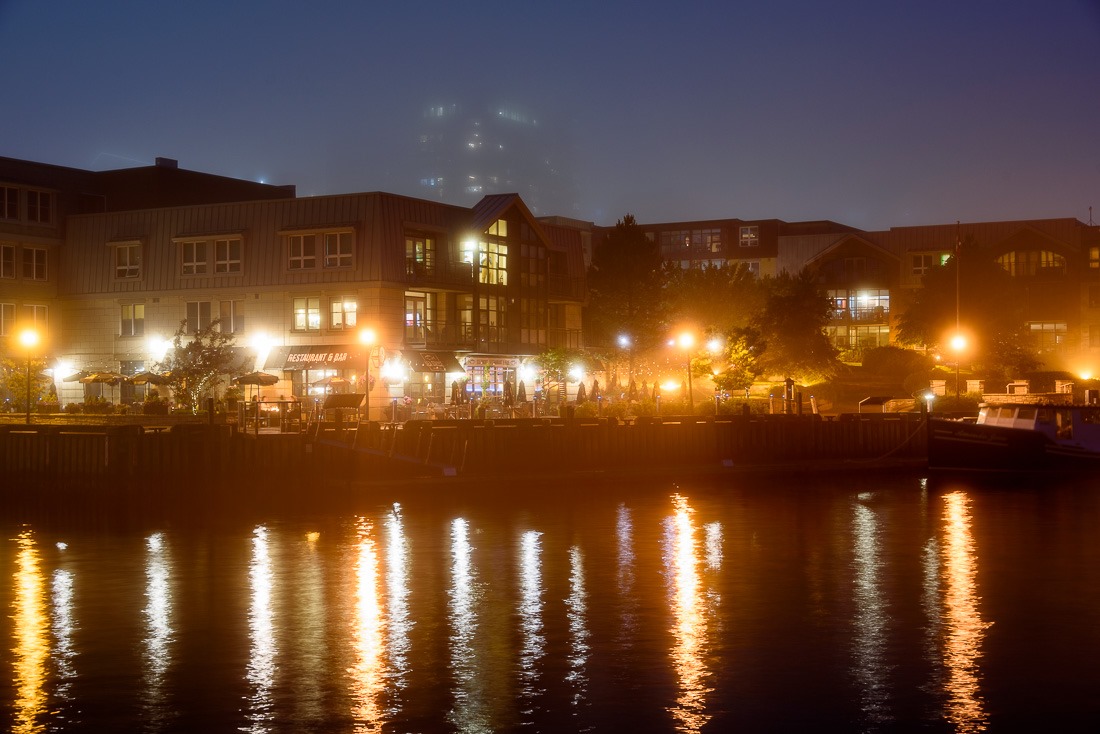 Halifax has chosen to use warm LED lights for the boardwalk, a very pleasant choice for anyone there. Those overly blue-white LEDs in other places simply take the atmosphere away. This evening here was just after the complete covid lockdowns were lifted. Everyone wanted to enjoy a patio and a glass of something, finally free again after so long being cooped up inside. Not that the lockdown was severe, simply all businesses were forced to close. Nothing to be had outside during that period. 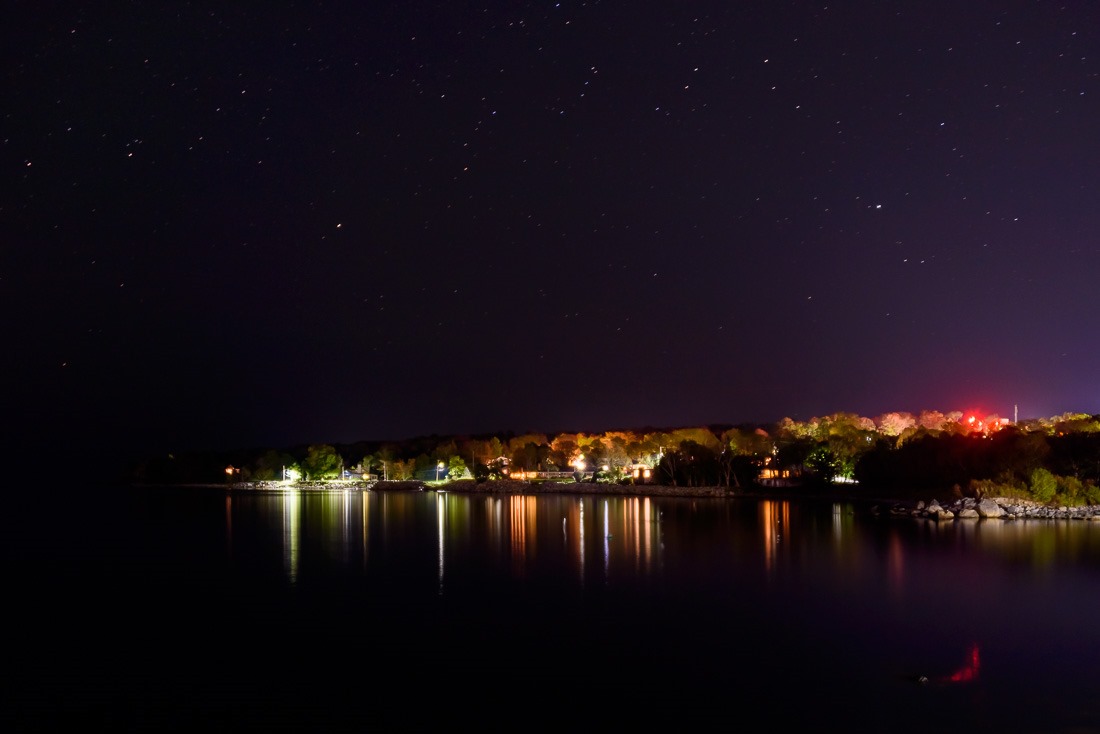 By the time the summer rolled in, I was house-hunting and no outings were possible during that time. We finally found a place to call our own in Liverpool, NS. That is some 140km away from Halifax, so driving back and forth during the day had me pretty well crashing during the nights. One of the first night shots in Liverpool was this one, from the lighthouse. 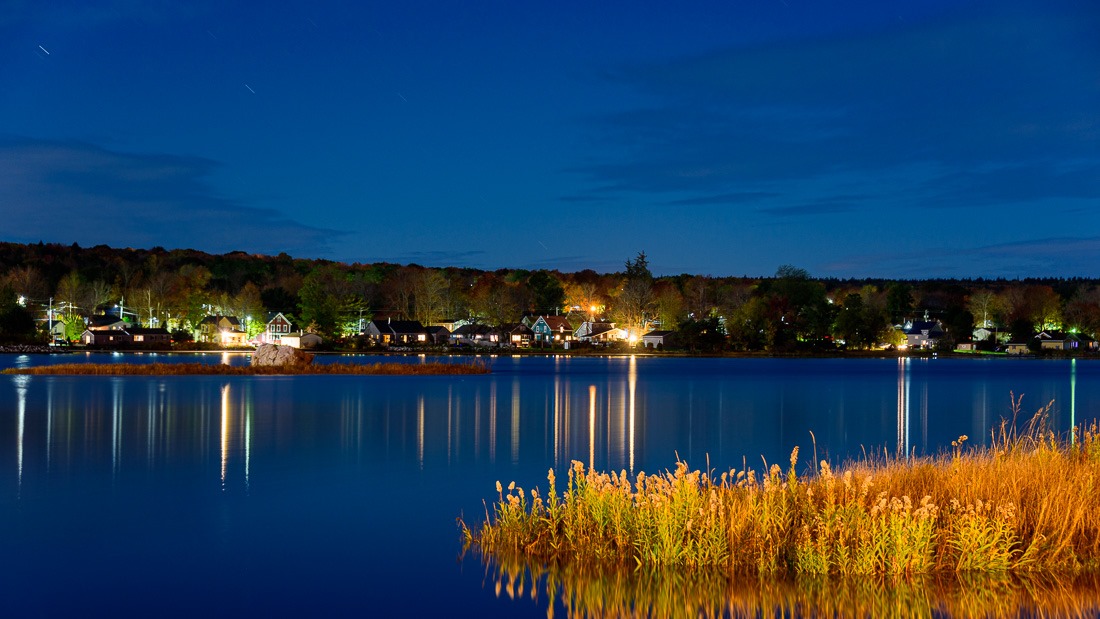 View over the Mersey

But even here, the night-time outings were fairly rare, renovations on the house have to be carried out, whether I like it or not. In the shot above, my house is in the centre of the frame. It’s a 120 year old home, with recent additions on a century-old basis. Some of that basis has to be renewed as well. But some nights simply cannot be ignored and I have to go out and shoot something. Armed with tripod and camera, a small tour around the neighborhood often yields surprising results. 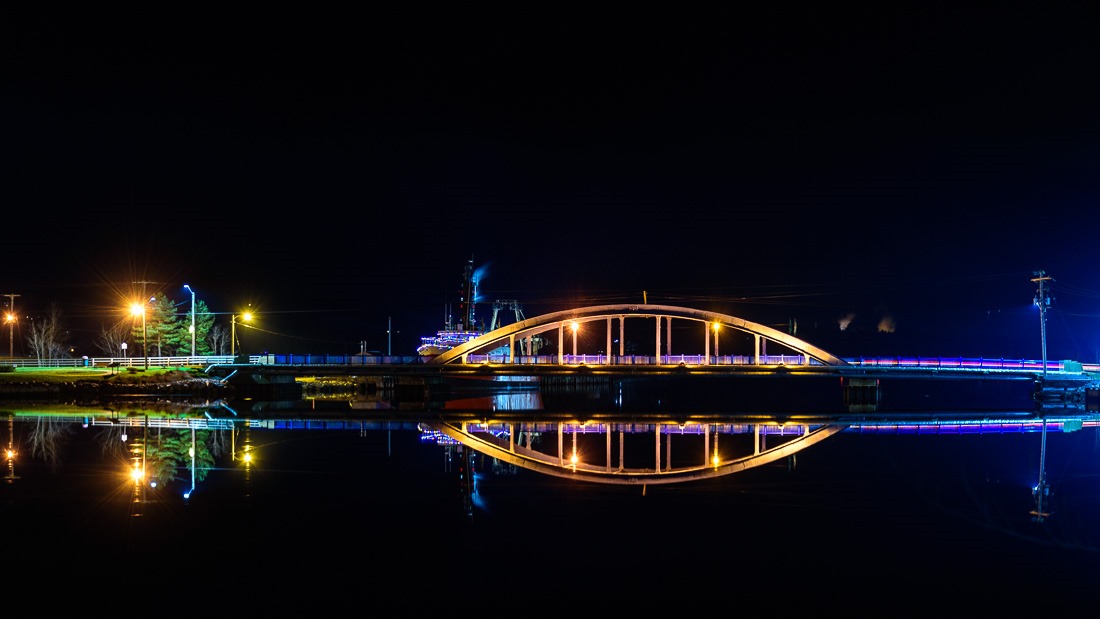 The town has a “new” bridge, dating from 1962. The previous one could open and the area just behind it was occupied by shipyards and wharves. Today, the area is a park and a parking lot. Somehow, the filling in of that land seems a bit “off” to me as high tides (king tides) accompanied by high winds tend to flood the whole area. I would have imagined the engineers would have thought of that and filled it in a few feet higher. 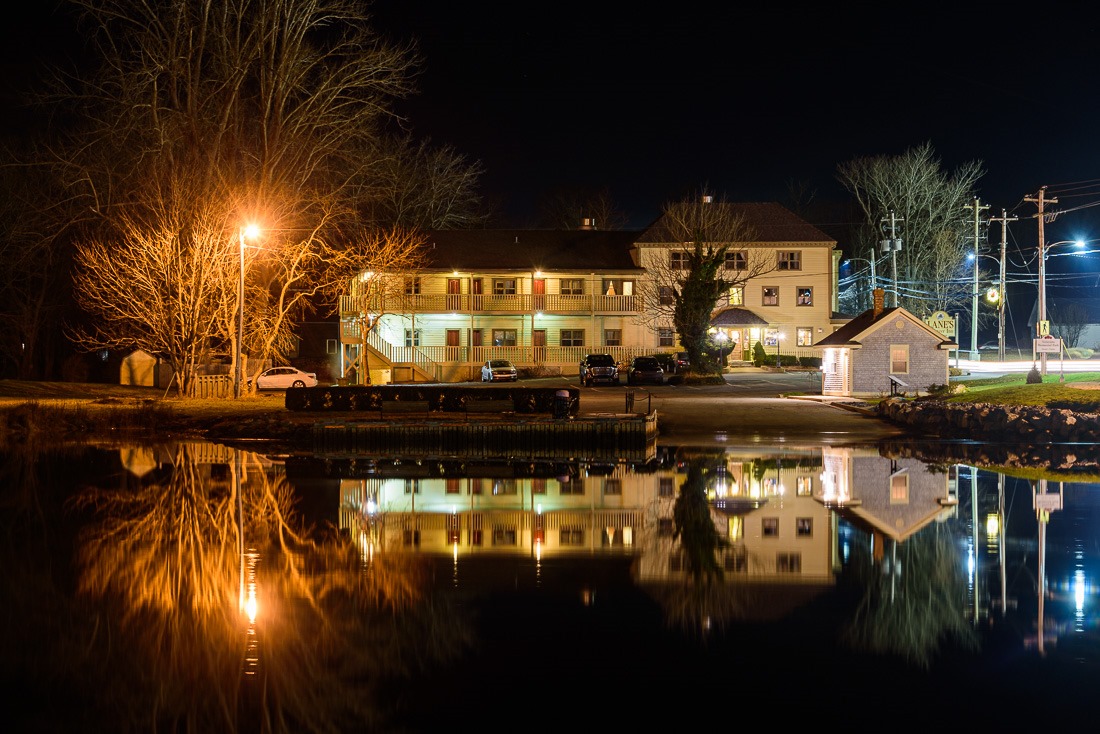 Your next place to stay

One of the oldest houses in town belongs to the Lane family, who created a nice place to stay for anyone weary of the long road to anywhere. Before, this house belonged to a famous privateer called Joseph Barss. Part of the original structure is still visible in the hotel today. A pretty piece of history at your fingertips. 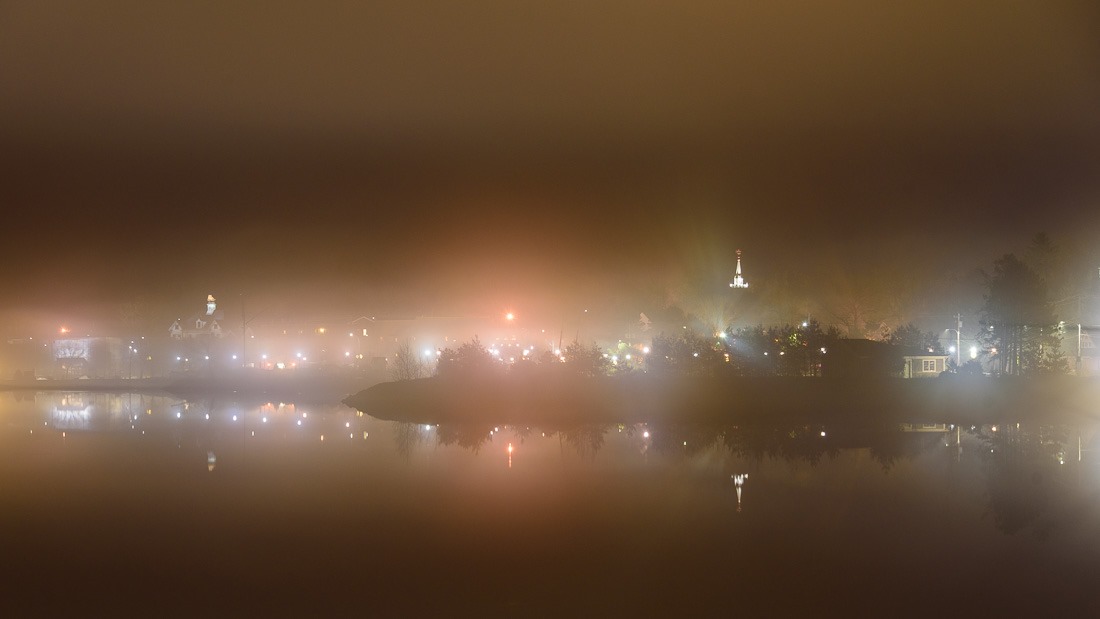 Sometimes, I don’t even have to go out of my own back yard. When trying to get some moody shots of the town over the water, the fog rolled in like a thin blanket. In the above shot, you can see the bottom as well as the top of the fog layer. At first I thought it was a problem with processing the image, but this is what it looked like. 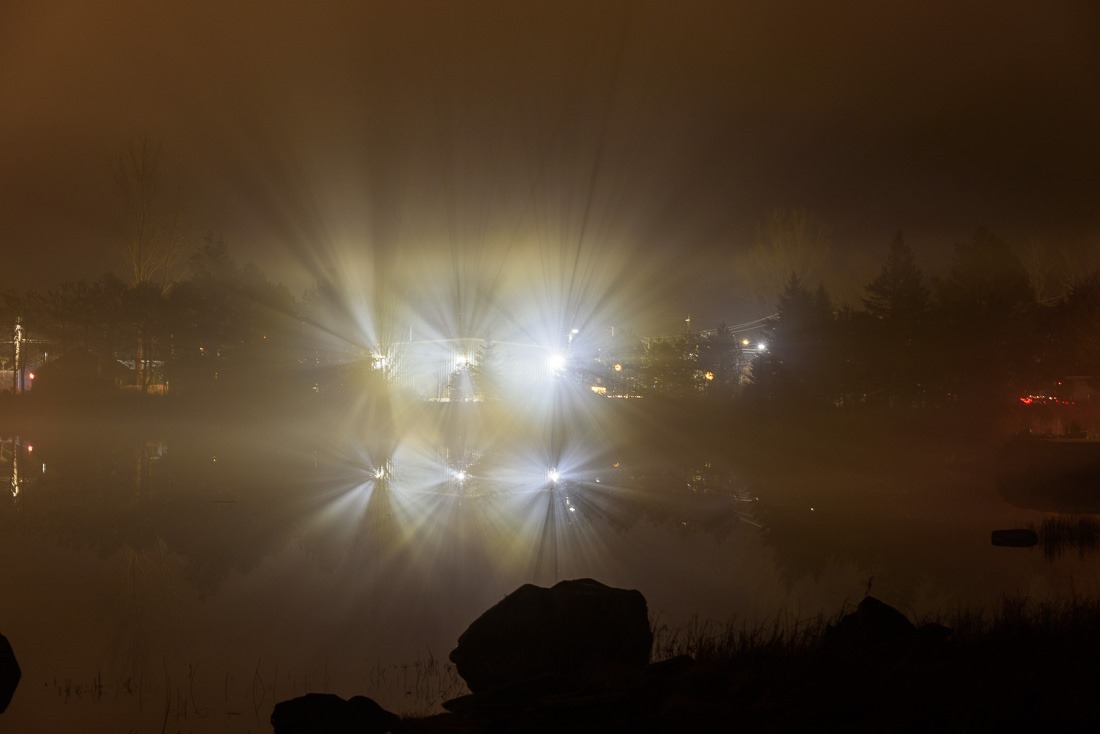 There were a few “spikes” in that first shot and it made me think if moving around wouldn’t give a better shot. A few meters to the side and I got treated to this show above. Bright lights from the firehall shining through trees and fog.

Sometimes you really don’t have to go far to get a nice shot.

Night crawling, sometimes a slow progress, sometimes a quick affair to get a shot. All it takes is to get out with a camera and a tripod, a few other odds and ends and one could come home with some amazing shots.