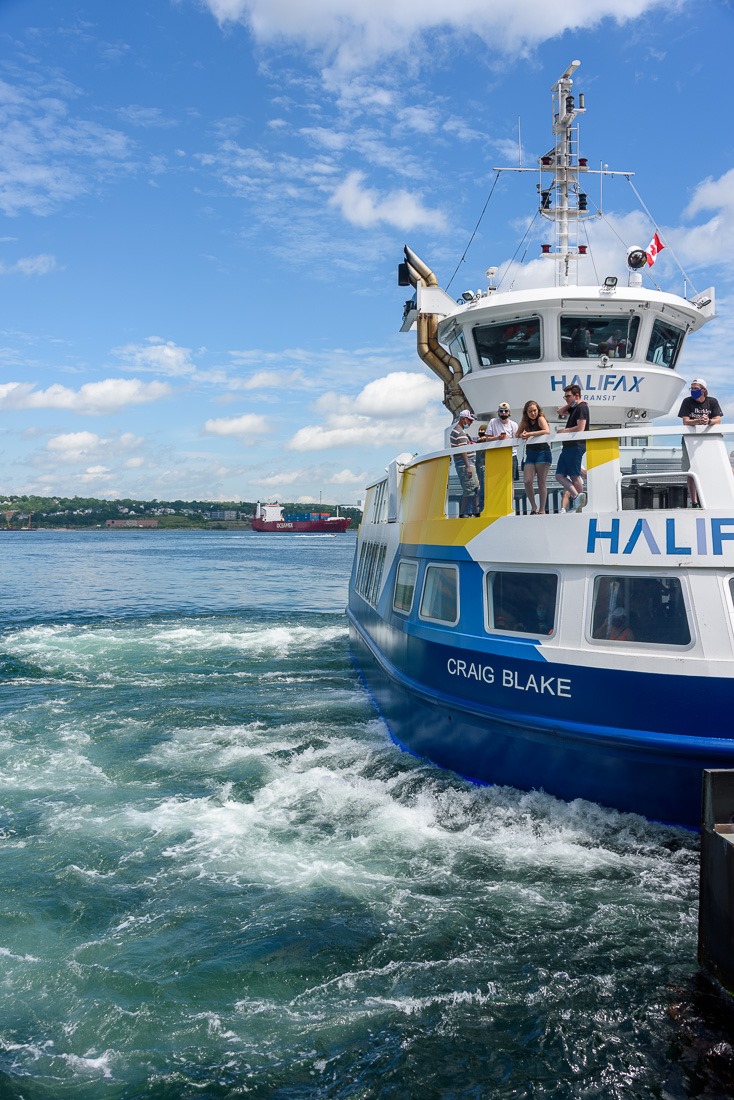 It was not a long trip, only about 15 minutes, but it brought us to the exotic city of Dartmouth. We had only driven through it a few times as not much of our activities lie in the east. Dartmouth can be seen from the Halifax Boardwalk, yet it always seems far away if you forget there is a ferry crossing the harbour. This time, we did not forget but went there on purpose. 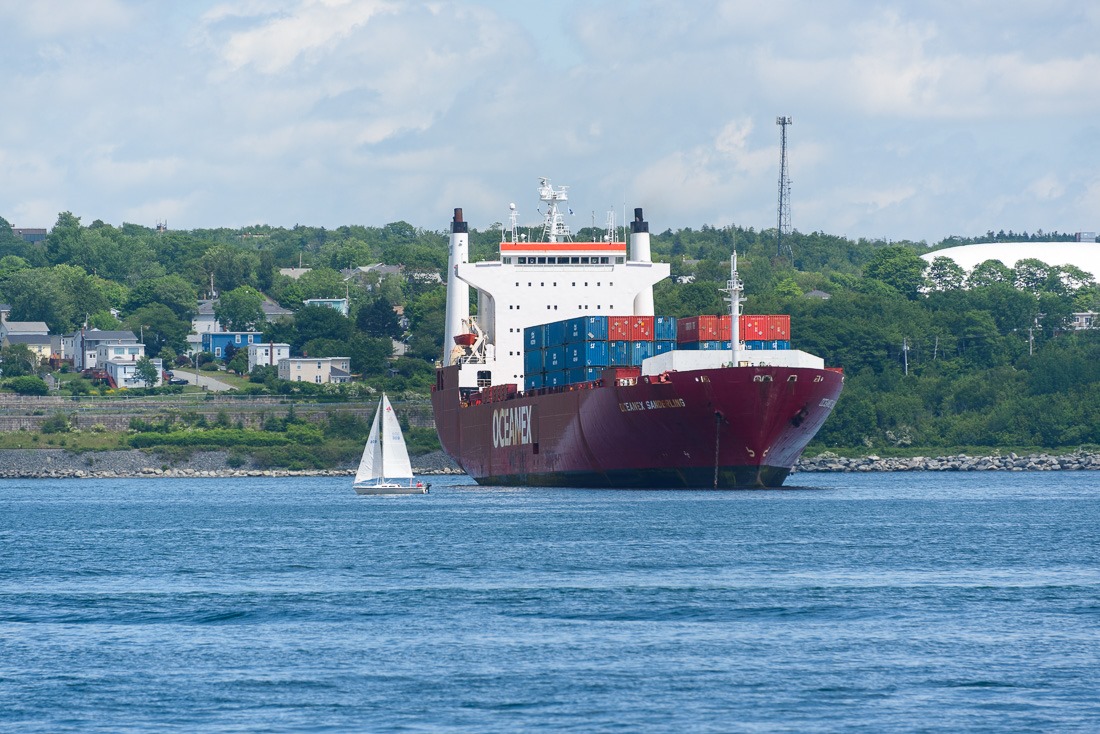 The day was hot and muggy. That looks like the start of a Mike Hammer episode. Yet it was indeed hot so a little trip on the water was very welcome. When the 15 minutes were over, it turned out to be even hotter on the Dartmouth side. The sun was pounding down on the ferry terminal and getting out of there needed some persuasion. We decided to get a bite to eat instead and check out the heat a little later. 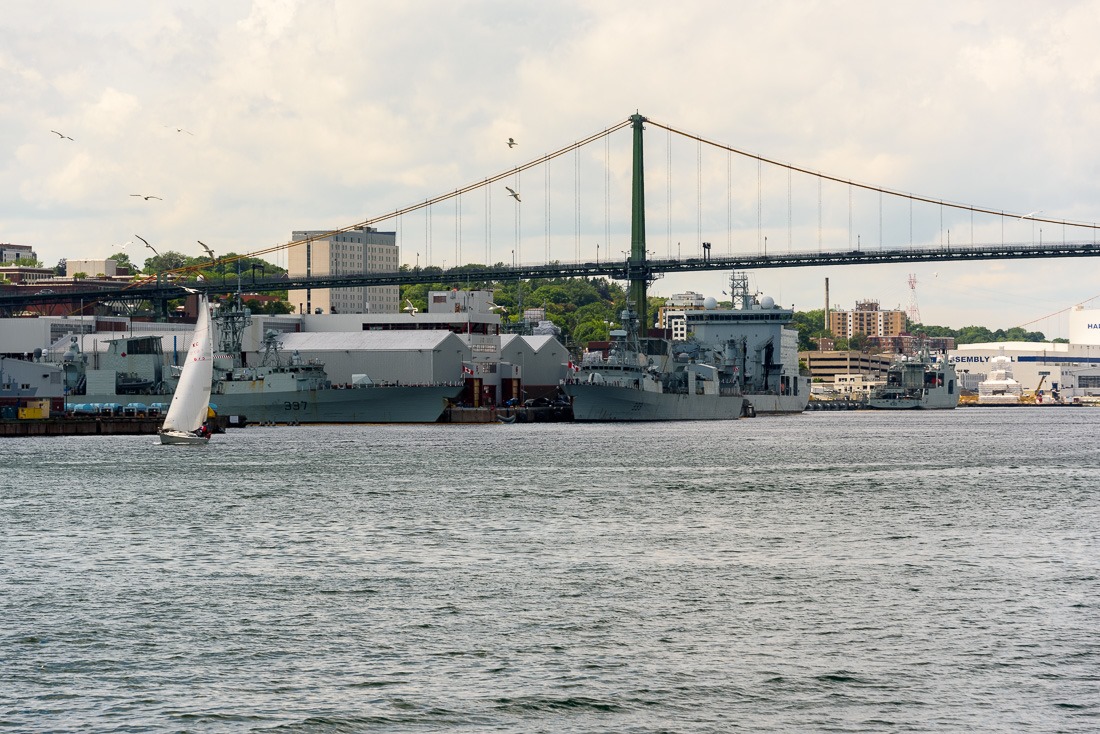 It was interesting to see Halifax from the other side. The MacDonald Bridge was towering over the scene. Pictured above is the bridge with what (I hope is) a small part of the Naval forces of Canada. When you go to Halifax or Dartmouth, one of the things you expect to see is ships. The bigger, the better. 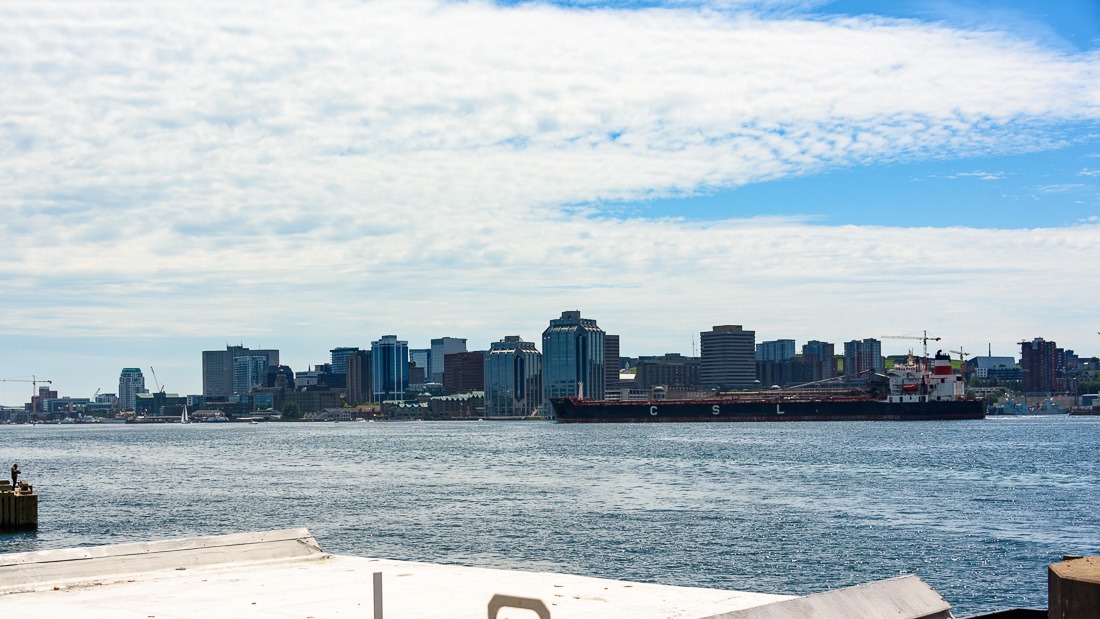 On its way out to different countries

This time, the harbour didn’t disappoint. In a somewhat “industrial” setting, this ship sailed past me in front of the Halifax Boardwalk. The industrial foreground was provided by the ferry terminal on the Dartmouth side. 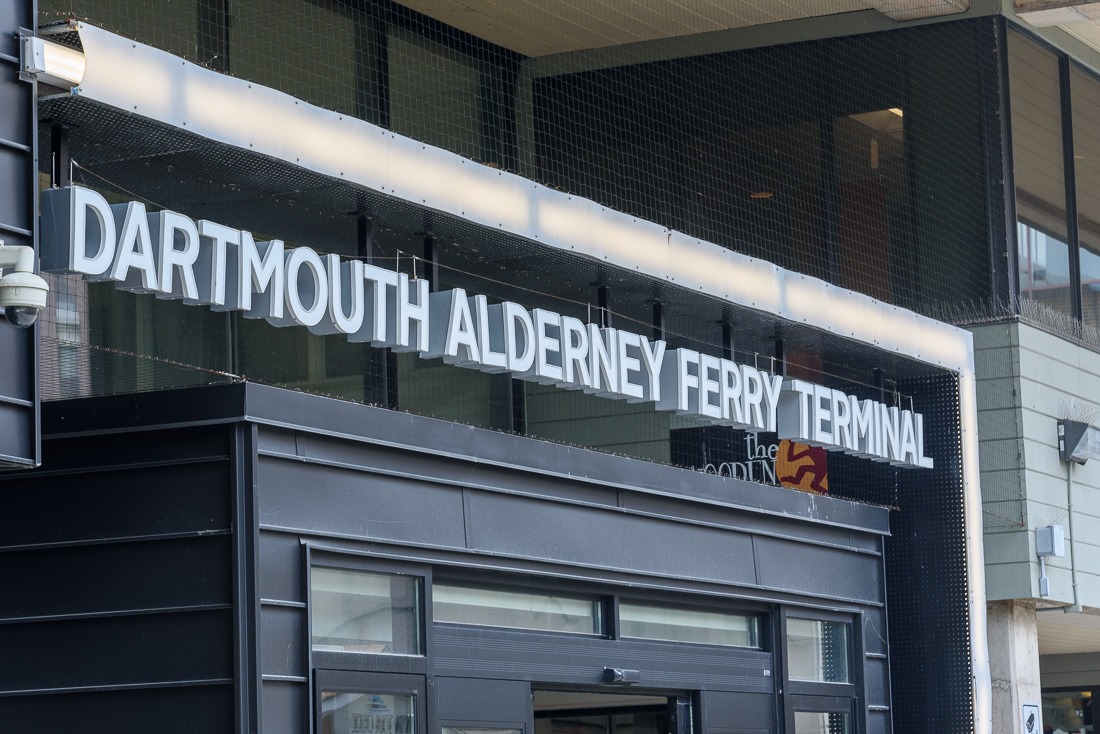 Don’t ask me how I know that, though. It must be written somewhere.

Walking around that terminal proved to be quite a task in the heat of that afternoon. So we decided to have a bite to eat (lobster, I think) and then go and discover a little more. Once the lunch was consumed, it turned out to have cooled down quite a bit and a stiff wind had started to blow. All one can wish for some pictures over the water. 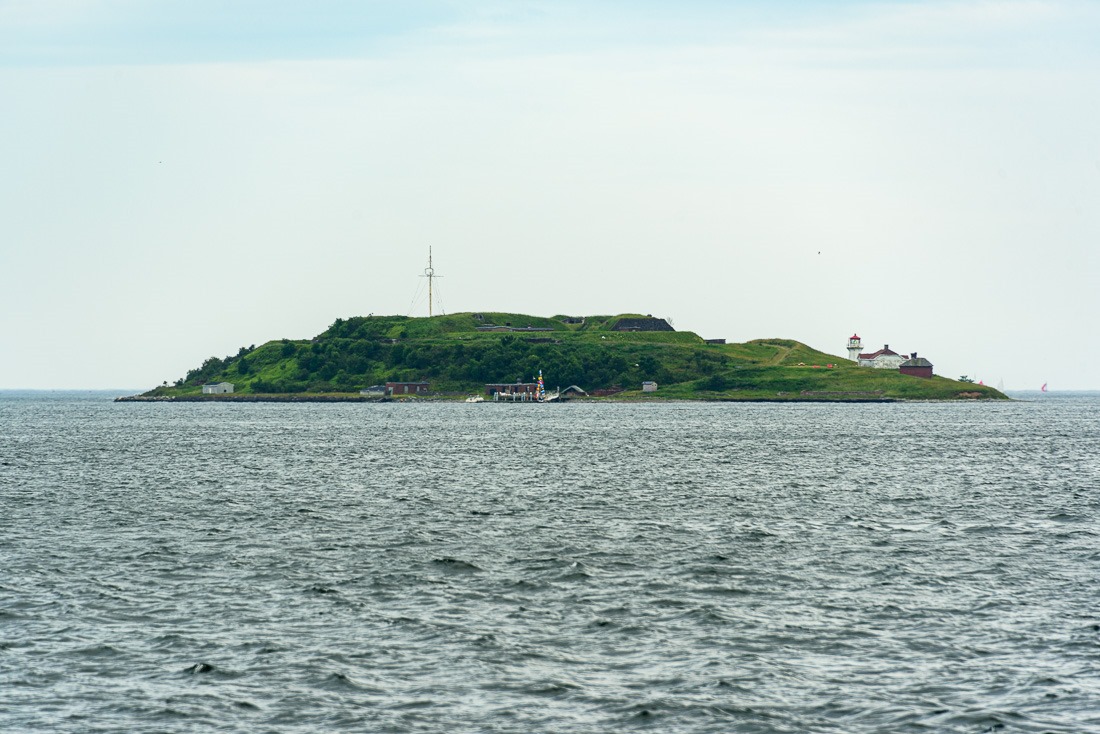 Pictured here is Georges Island, of which I have more info here. Georges Island is now mostly open to visitors on the weekends and in summer. Up until recently it was a military site, with all the access restrictions that come with such a status. Whatever the military used it for, it is no longer employed. Now, a visit to the island is a pleasant affair. Plenty of things to see. 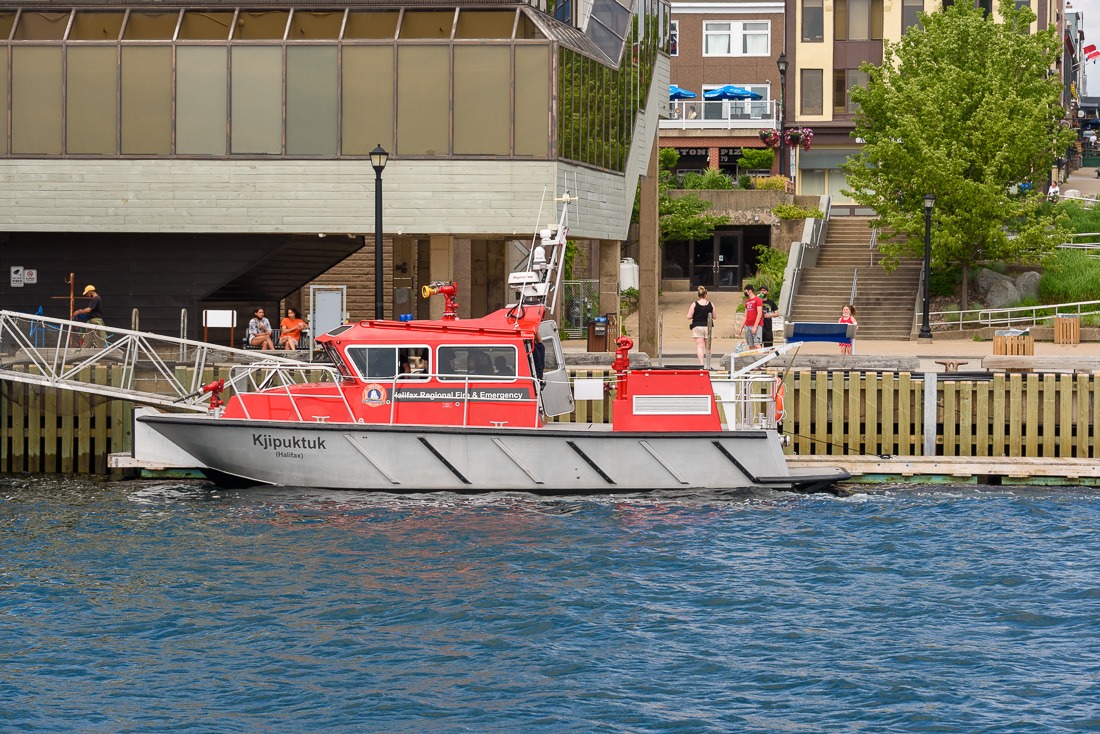 The city of Dartmouth has also acquired a new emergency boat called Kjipuktuk (Gee-book-took). This is Micmac for “The great harbour”, their name for Halifax Harbour. Let’s hope that this boat will not have too much work to do, despite the investment. 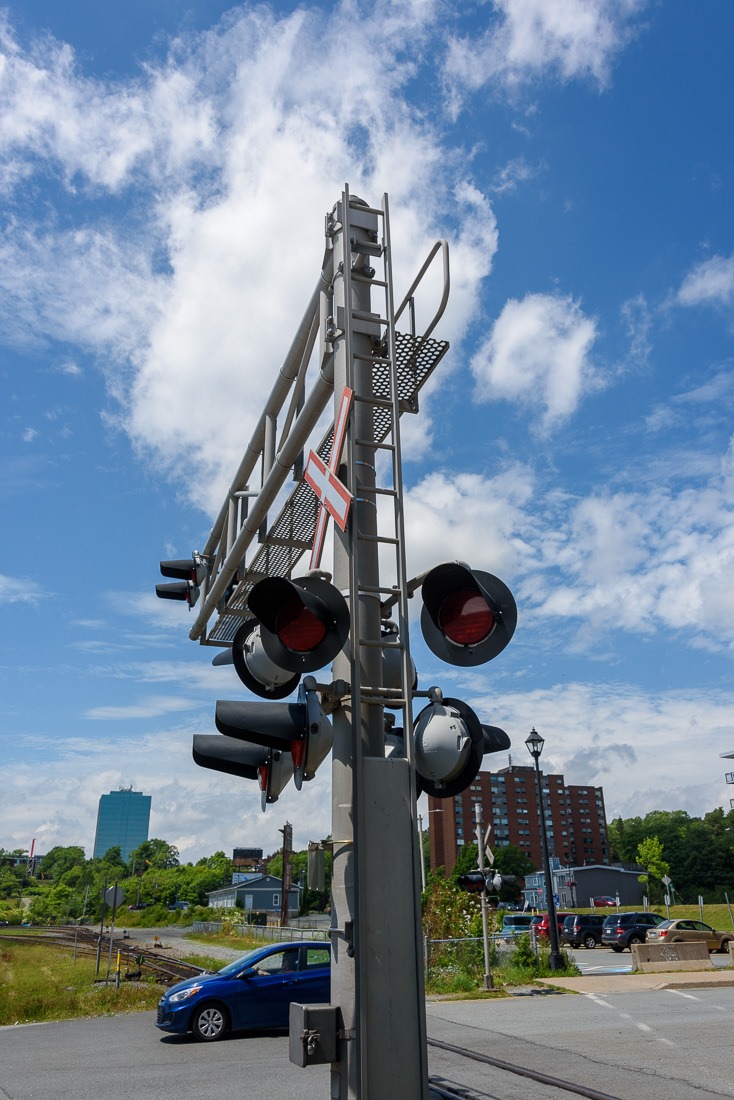 One thing that caught my eye on the Dartmouth side was the apparent railway lines and crossings. You don’t see those in Halifax. At least not in the area where I live. So, a simple railway crossing light becomes a photographic subject. I guess some people must have thought I was not right in the head to photograph this thing 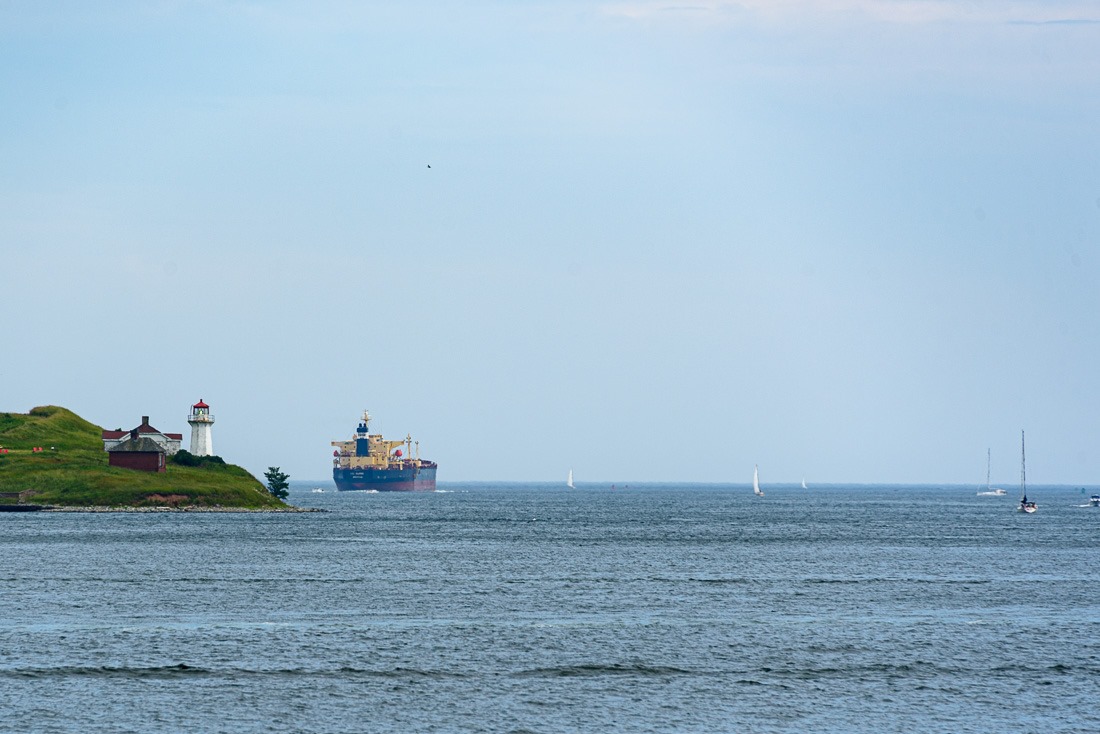 On the ferry back to Halifax, I caught a last shot of this outgoing tanker ship, it had just left the oil and gas facilities on the south end of Dartmouth.

And so we can play the tourists close to home. On foot, clicking away at everything around us. Coming home with hundreds of shots to cull into a few dozen. I guess all photographers have that task after a nice day of shooting…