Last week I was startled by the sound of fog horns. Working late in my office, I had no idea what time it was or even what weather it was outside. Those horns started low and soft but soon got a lot louder. One glance outside and the reason was clear. Or rather, not clear at all. Fog or mist, the result was a magical environment with plenty of things “missing”. 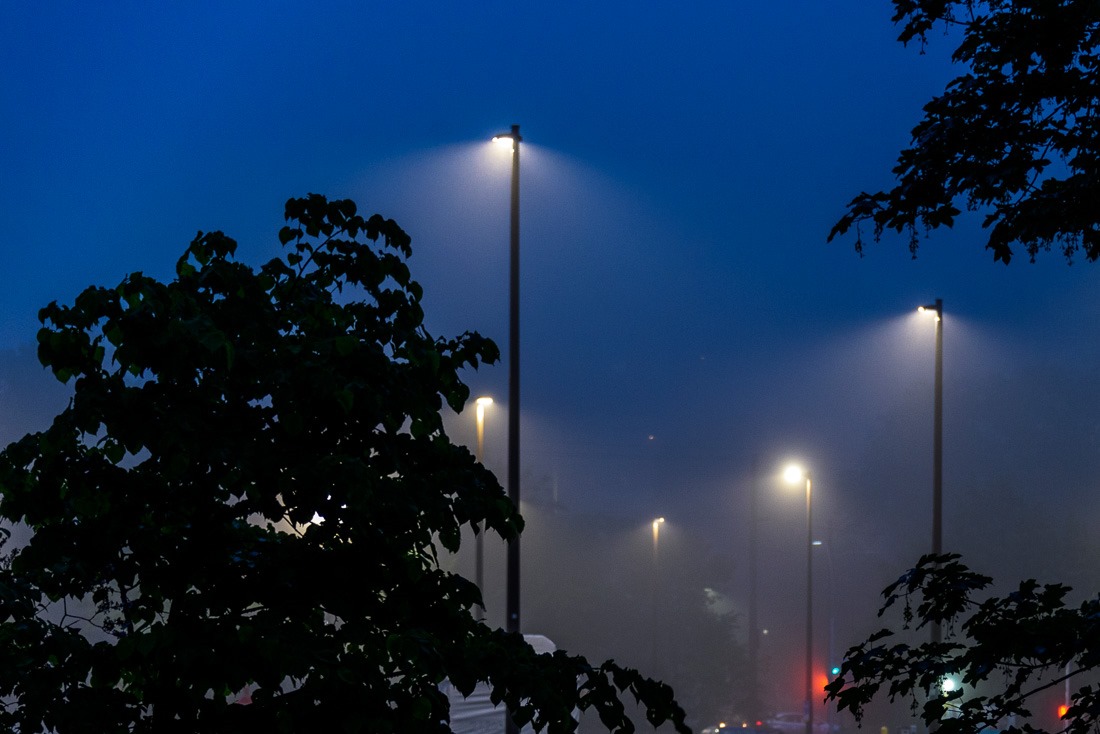 So I grabbed my camera and left the apartment. The first view was the above one over the parking lot of one of the hospitals close by. I had already wondered why there were no helicopters flying in at this time of day.

So the next target became the famous Halifax Boardwalk along the Atlantic. The streets were wet and the atmosphere gloomy. Just the way I like it. My camera and lens are weather sealed so they can take this kind of dampness without a problem. Provided I dry them up properly when I get home. 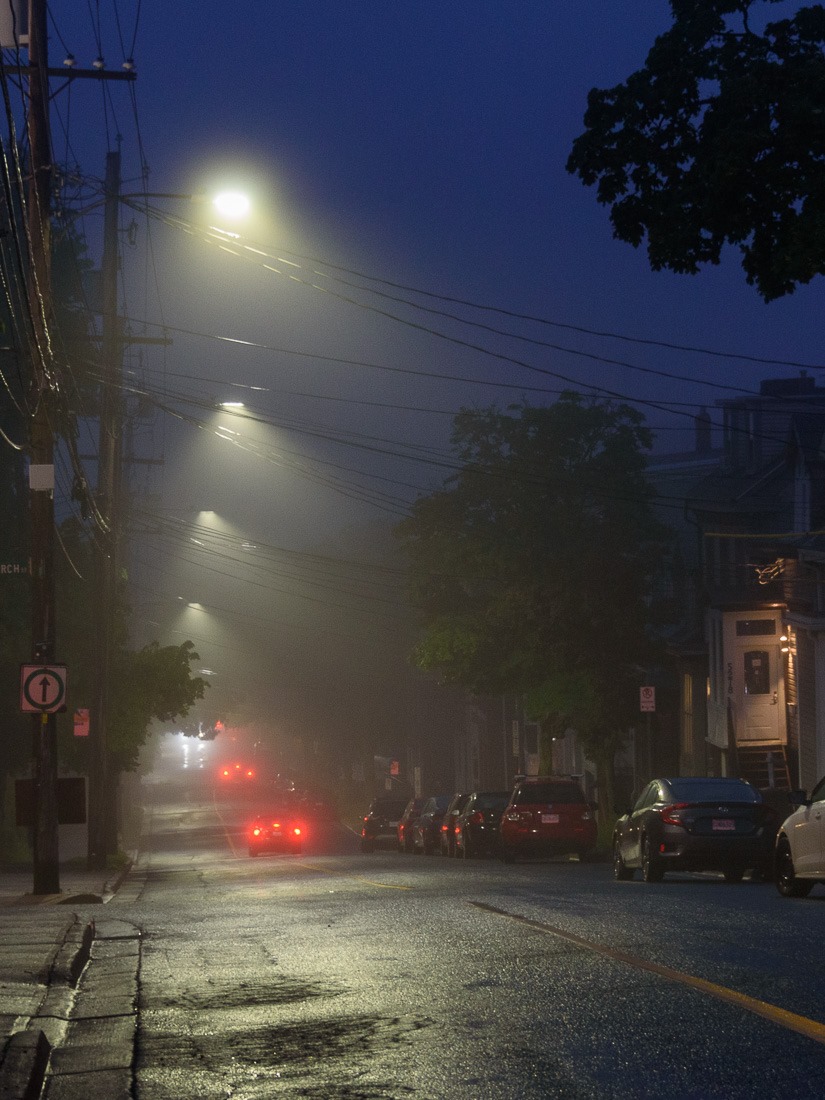 On towards the waterline. Another street with a phenomenal view and feeling.I just can’t resist those light cones from street lights. The feeling one gets when walking in the fog, with limited vision and limited, muffled sounds is nothing short of magical. Or creepy, depending on how you look at it. 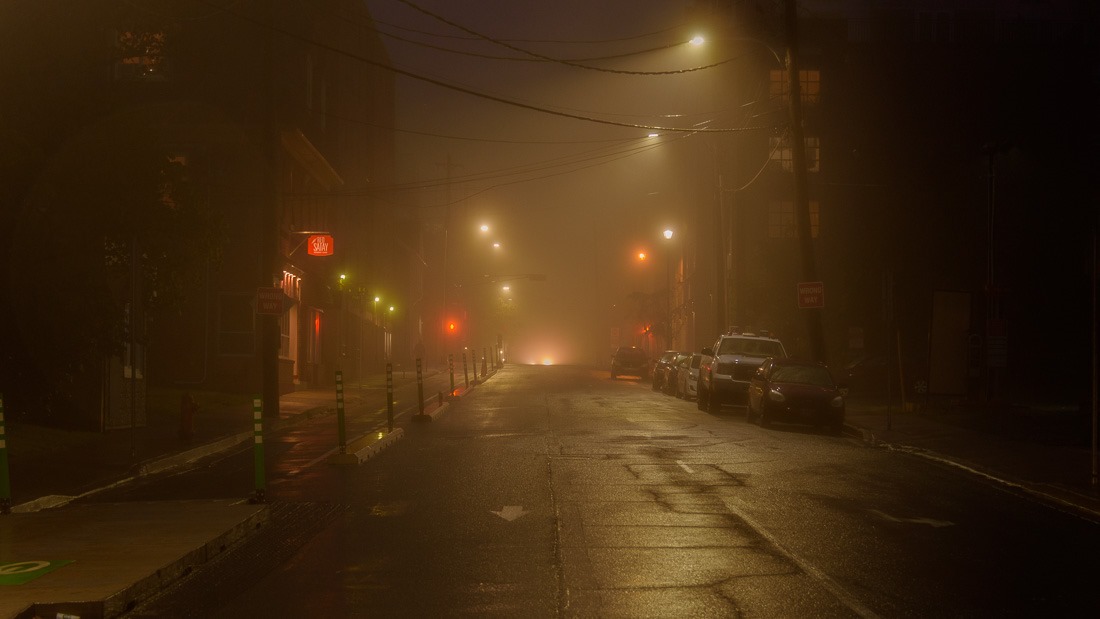 When you stand in the middle of a street, with cars just coming over the bumps in the road, the shots are just begging to be taken. The overall colour cast depends on the street lights in the shot. I decided to not zero them out and make the colours look digitally correct. After all, our eyes perceive what they want. 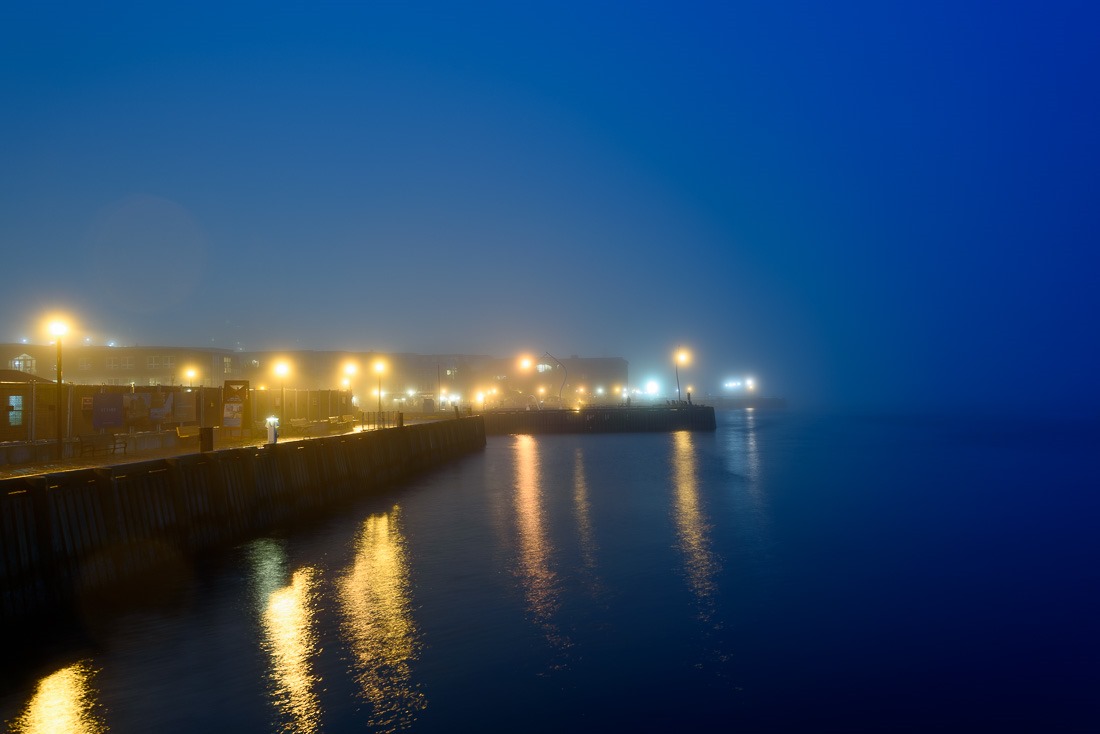 Arrived on the boardwalk, Dartmouth, the “other half” of the city was invisible. All that remained was the seafront of Halifax. This time I had made sure to have my tripod with me as well. While the D750 can get by with higher ISO and better handholdable shutter speeds, I preferred to do it the “old fashioned” way. Tripod, ISO at base level and shutter speed… whatever. 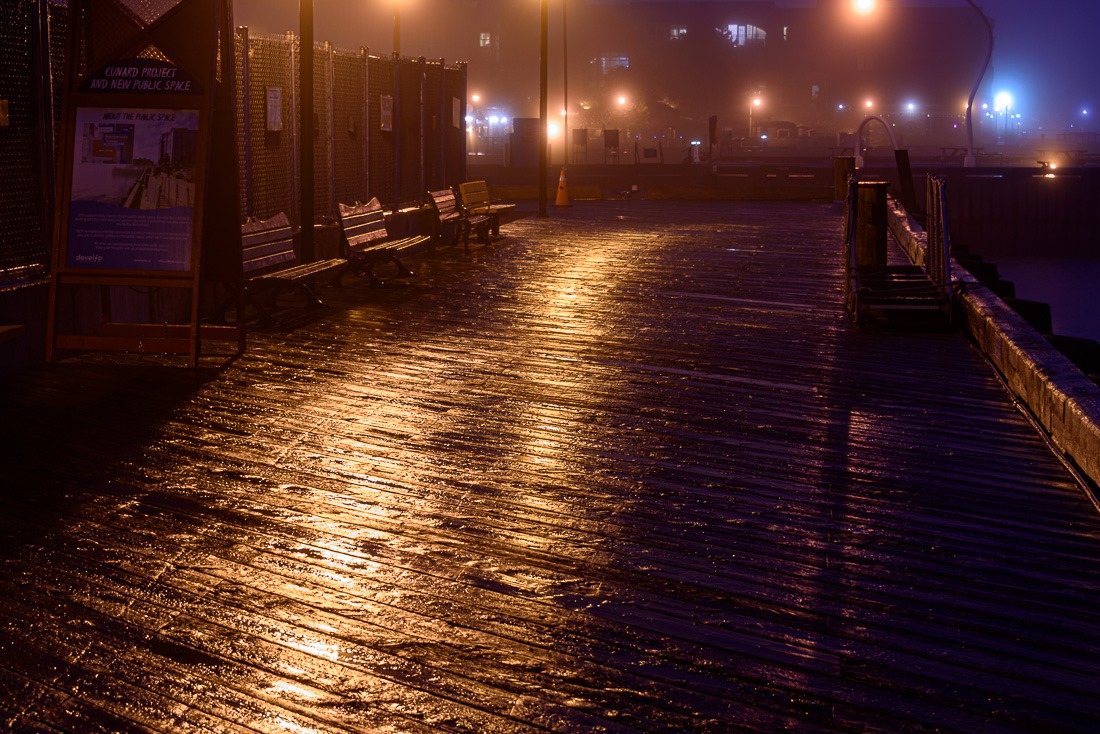 The boardwalk itself was wet. An easy conclusion when it’s foggy. Yet I have never (not often) had the chance to shoot the reflections in the night. Most of the time, the interesting places were too far away or no longer reflecting lights as they’d been turned off in the night. Shooting traffic light reflections is not my thing either. Here, however, the patios still had their lights on so reflections were easy to get. 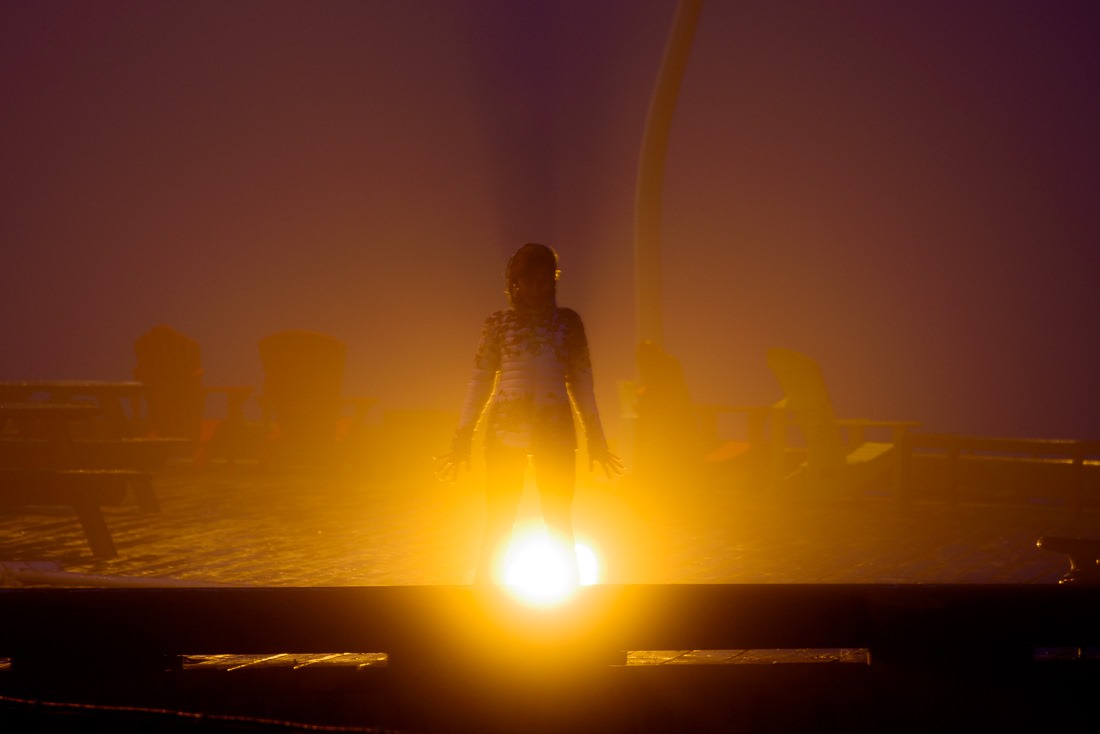 Then it was time to shoot that lonely visitor from another time. At the time of arrival in ours. This time traveller was nice enough to stand in front of an art feature with a streetlamp drunken on the ground. The art installation states that the lights are fully functional, so that has now been verified and confirmed 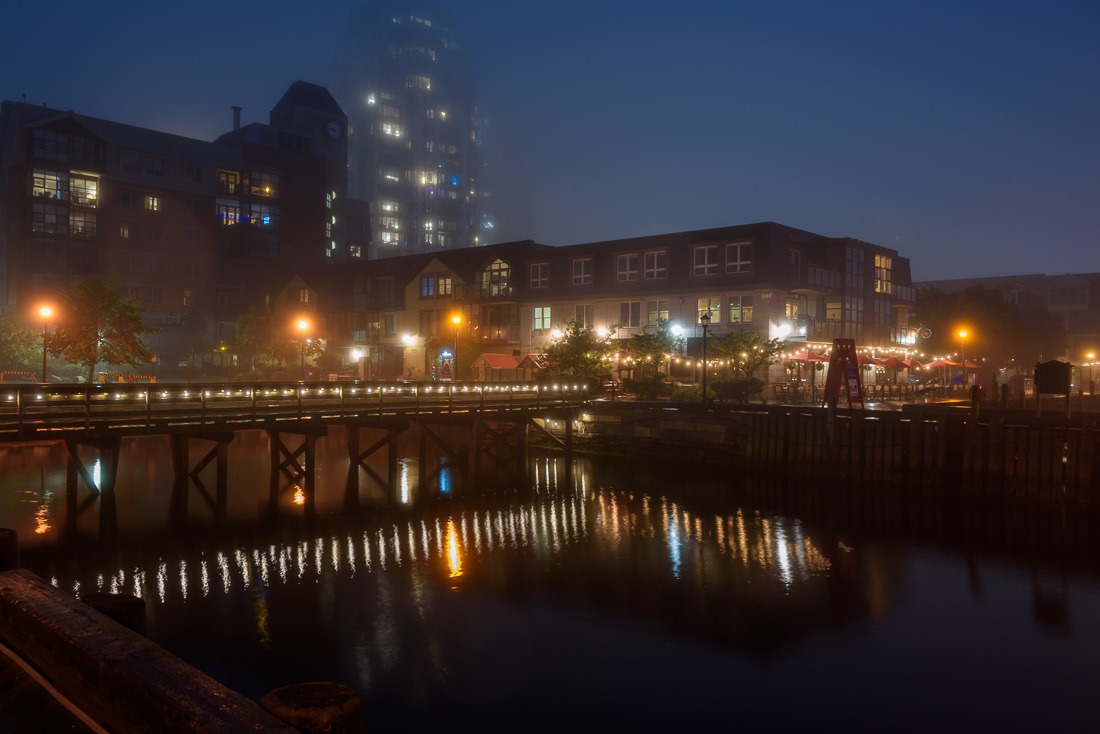 What do the patios look like in this kind of weather? Not really overcrowded, but still some people (diehards) were sitting outside. Not surprising after a long period of closures of restaurants and other gathering places. The bridge was my next target in this picture, as it is brand new (barely a month in function) and has lights all along the railings. 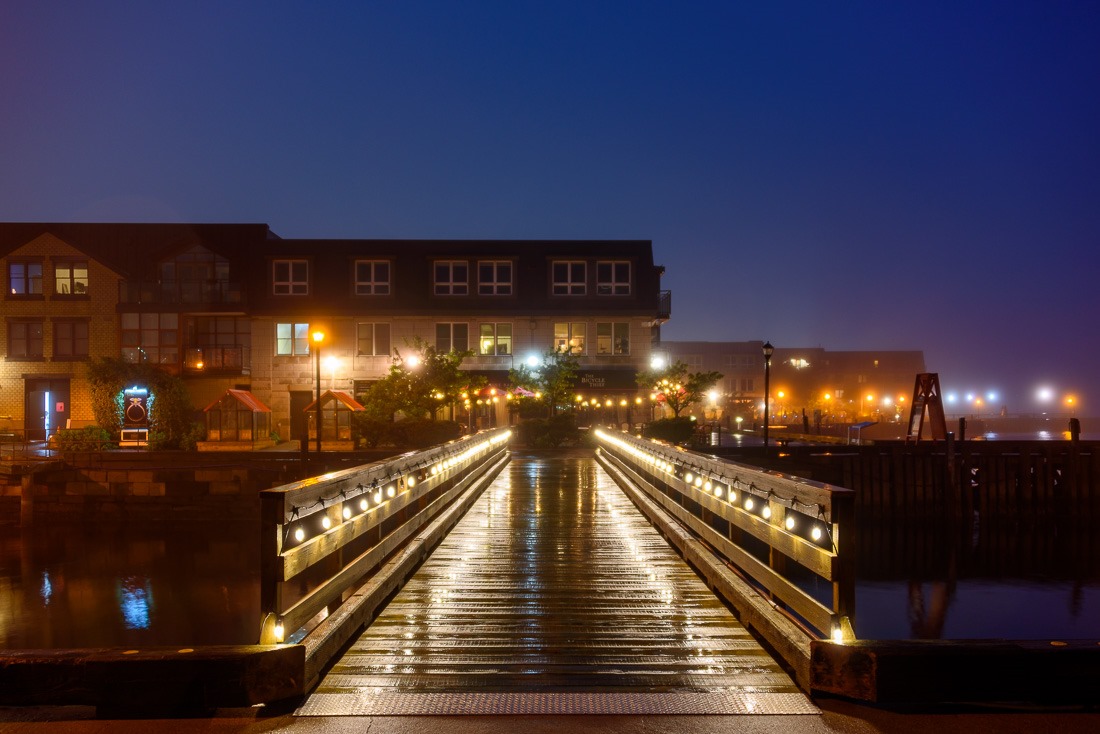 There again, the reflections were beautiful. A nice golden light from LED lightbulbs in the correct colour. The City of Halifax is doing things right. Then it started to rain a little too much to my liking and I decided to go home. Once at home I regretted not having pushed on in the rain, but when everything gets soaked, the fun is quickly gone. 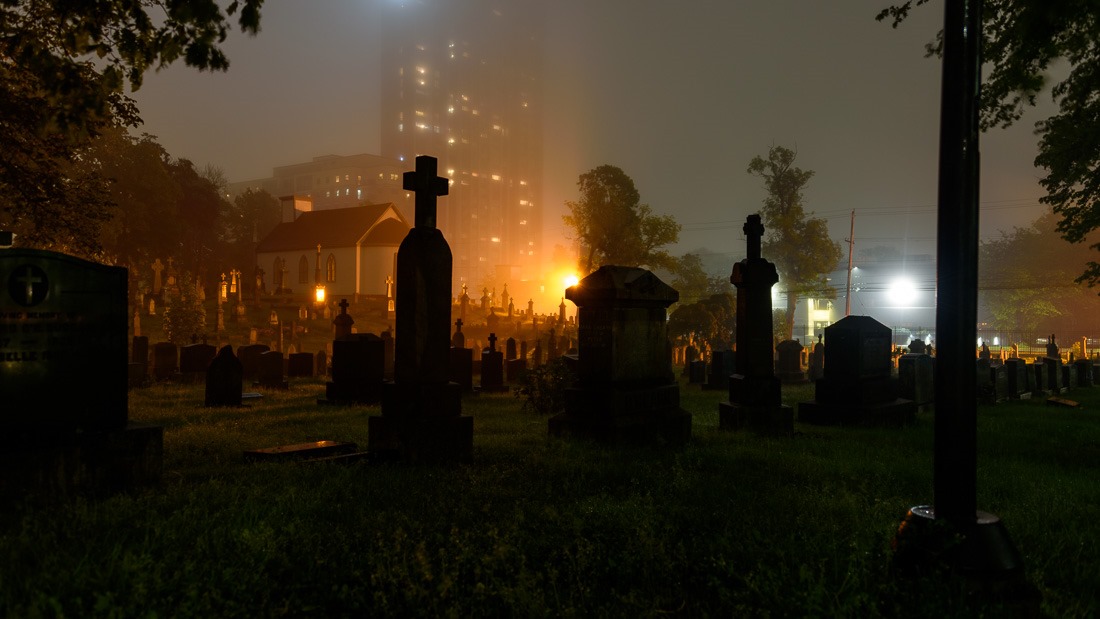 The end of the road

Close to home, this view struck me as “interesting”. A centuries old cemetery overlooked by a not yet finished hi-rise. There was just enough visible of the building to be interesting and not enough to take charge of the whole picture. One shot and I was back on my way home.

Halifax has plenty of surprises I will want to discover over time. Some will be easy, some will be less obvious to get. We’ll see.