Canada is a big country, second biggest in the world. Only Russia is bigger. Only about 32 million people live here. That leaves a lot of space for everybody. To me, it remains a mystery that 75% of the Canadian people still want to go and live in 1 million inhabitant cities. Oh well, understanding is not given to everybody… 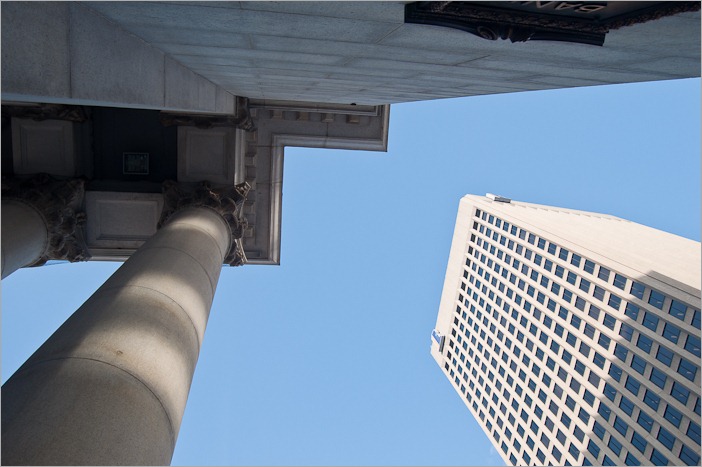 City wilderness, not much sky

And even within the city limits there are plenty of places where the sky is nicely visible and traffic is nearly inexistent.

A few months ago I wrote about the Assiniboine Forest, a  forest in  the city. So, we went there again to see how everything had changed in the new season.

With all the rain we have had in the last few weeks, it was sure that all the old yellow color had changed into green. 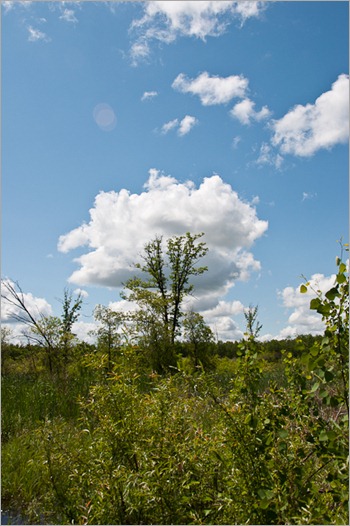 Lots of green in the Assiniboine Forest

Everything was green, but I really didn’t expect this big a change. Even the sounds of the animals had changed. Although you might expect more frogs after this wet period, there were none. At least none that were croaking. Perhaps busy doing something else. 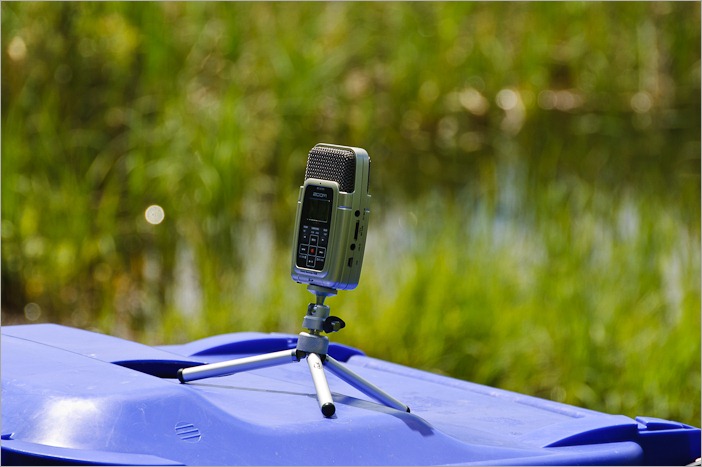 So, on the same garbage can from last time, I placed my Zoom H2 Recorder for the “current” sounds. Lots of birds, but no frogs.

The birds seemed to be happy. Our feet got wet. Yes, I know I sound like a 6th grader, writing like this. We planned to go through the forest like we did a few months back and got stuck in the mud. Getting through with bicycles was not a good idea. 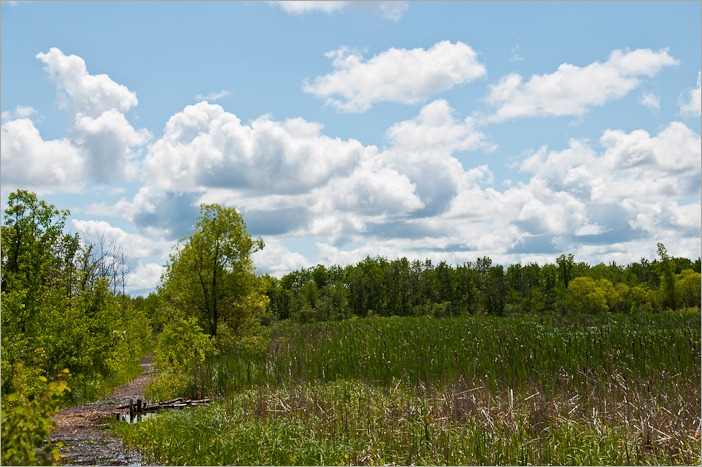 Too wet for our taste

The pond that was nice and low last time now shared the road with us.

This was also the moment, coming out of the woods, that I noticed the sky and the clouds. Now it’s not a very engaging idea to write only about skies and clouds, but here they seemed a little overwhelming.

So here I go writing about clouds and sky and how to catch them. 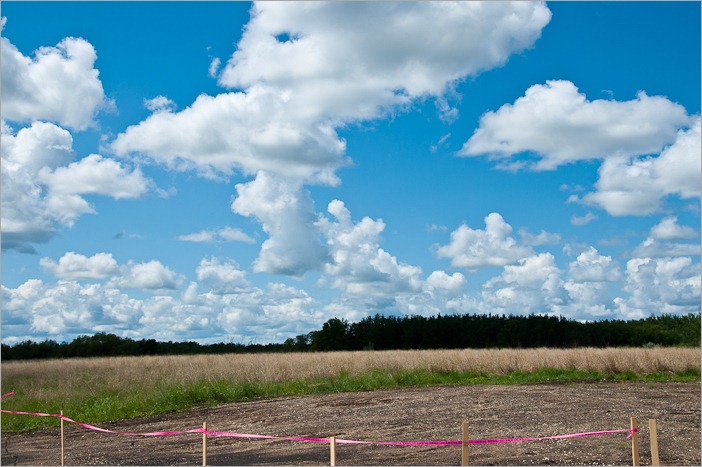 Well, for sky you need at least one thing: a polarizing filter. If your skies look bland with a few clouds and no contrast, a circular polarizer might do the trick and bring your skies to life. 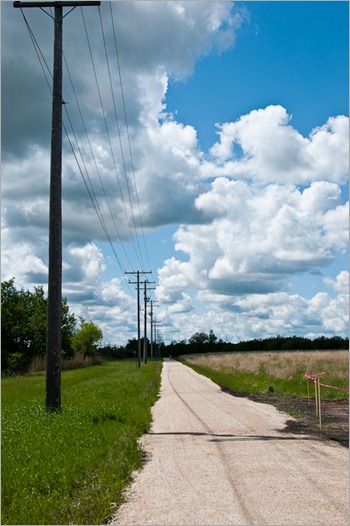 Taken with a polarizer

The above place always makes me think of the Dire Straits’ song called Telegraph Road. Endless and with only telegraph poles on the shoulder. The sky’s contrast is greatly enhanced with the polarizing filter.

Since we could no longer do the little trip we had planned, and biking back around the other end of the pond just to be stuck again was not exactly what I had in mind, we decided to push a little further and go to Fort Whyte.

Here too, lots of water, but also big skies. 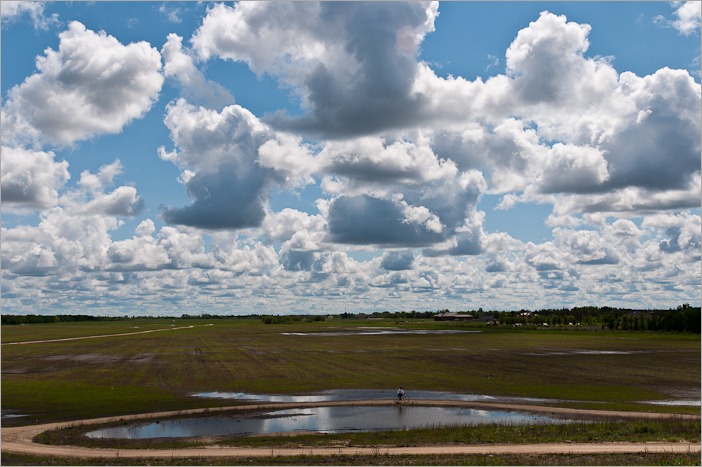 Fort Whyte is an ancient cement quarry, now converted into a wildlife preserve. Hardly visible in the above picture are the tracks the deer left when walking through the mud. 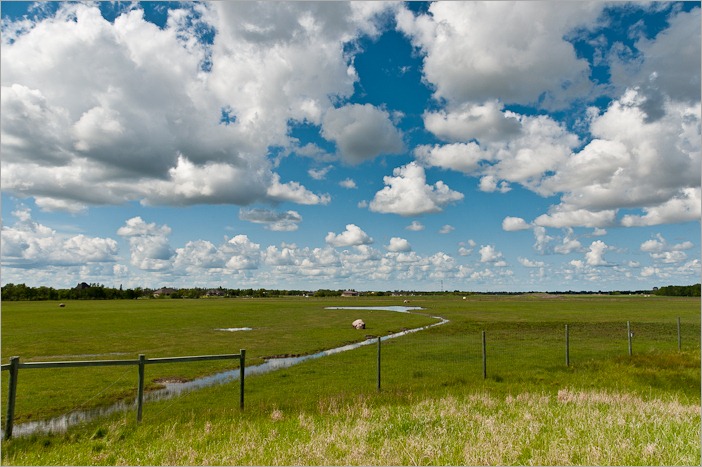 View from the bison mound in Fort Whyte

When inside Fort Whyte, there is lots to see, like always. But what struck me most was the big sky, clouds and sunshine. Yes, perhaps I get a little lyric about this, I guess we haven’t had that much nice weather in a long time. Probably it will wear off in a few months. 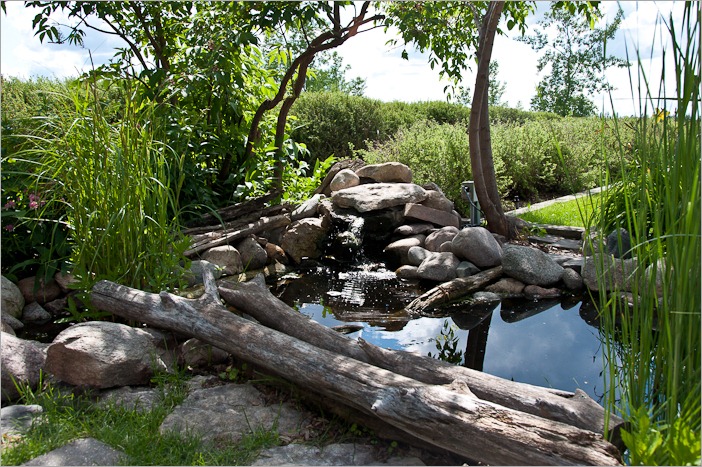 In Fort Whyte you can now see the little places that were previously closed or snowed in. Little waterfalls, gardens and many other sunshine-loving things are now available. No wonder that inside, there is hardly a soul.

Underneath the bird feeders, nothing is lost. 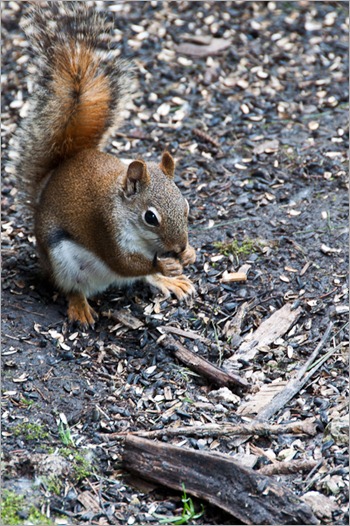 But what is mostly visible in Fort Whyte and in the Assiniboine Forest is the sky. Look at this sky and tell me you don’t like it! 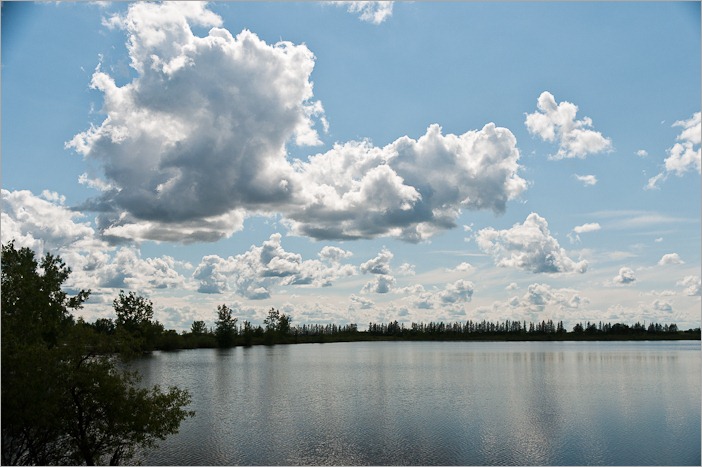 Polarizer, ok, but not on top of another filter… bad idea.

All in all, if you want to see big sky, even in the city of Winnipeg you can get it. No need to go to the more notoriously ‘Big Sky States” like Montana or other, Winnipeg will do fine.

I  guess there are lots of other places we haven’t been to yet that are worth going to, writing about and most of all worth of being photographed. Let’s see how far we get next time.