The trip was fairly short and uneventful. The only one not enjoying it -at-all- was Mia. Not used to car trips, short or long, she retreated into her own space. We started off on a Sunday morning. Warnings of bad bad weather were out. 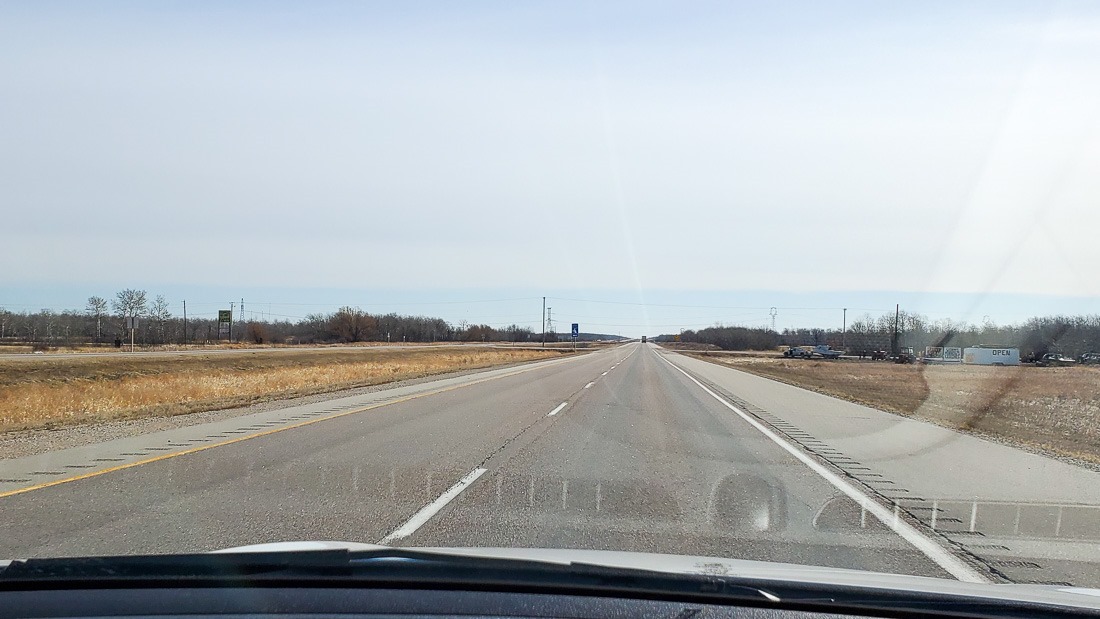 We had no choice but to move ahead of the storm system. When we left, Winnipeg was still sunny, devoid of snow and ice and I intended to keep it that way for all of the trip.

Many of our friends here in Winnipeg will recognize all or part of the road shots in this post. None of the shots are mine this time, driving and taking pictures with a cellphone don’t go together. I’ve tried that before and it was most definitely not a success. Handling a cellphone while driving is a serious risk. Even more at 100km per hour (or a little more at times). So rest assured, I have not mirrored the pics to show as if I were a passenger 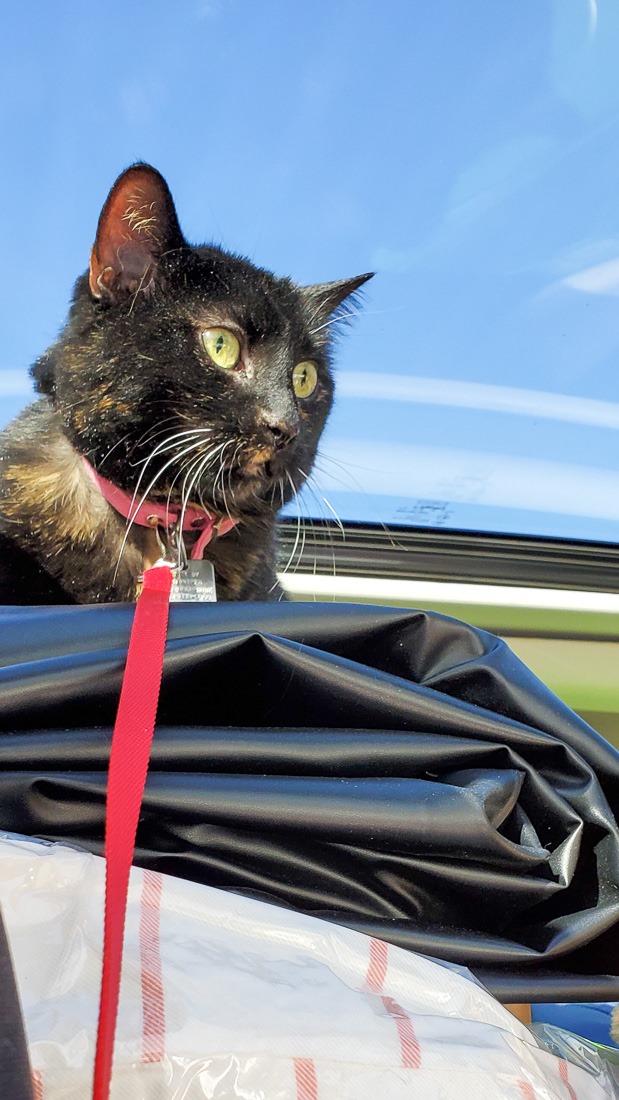 The first day, Mia the Cat decided that driving was not fun. She decided to go to sleep and hoped for something better when waking up. When she did wake up after some time, we were greeted with a giant HISSS against this situation having not changed… At first we kept her in a travel case, but over time she was free to roam in the car, just not into my space. 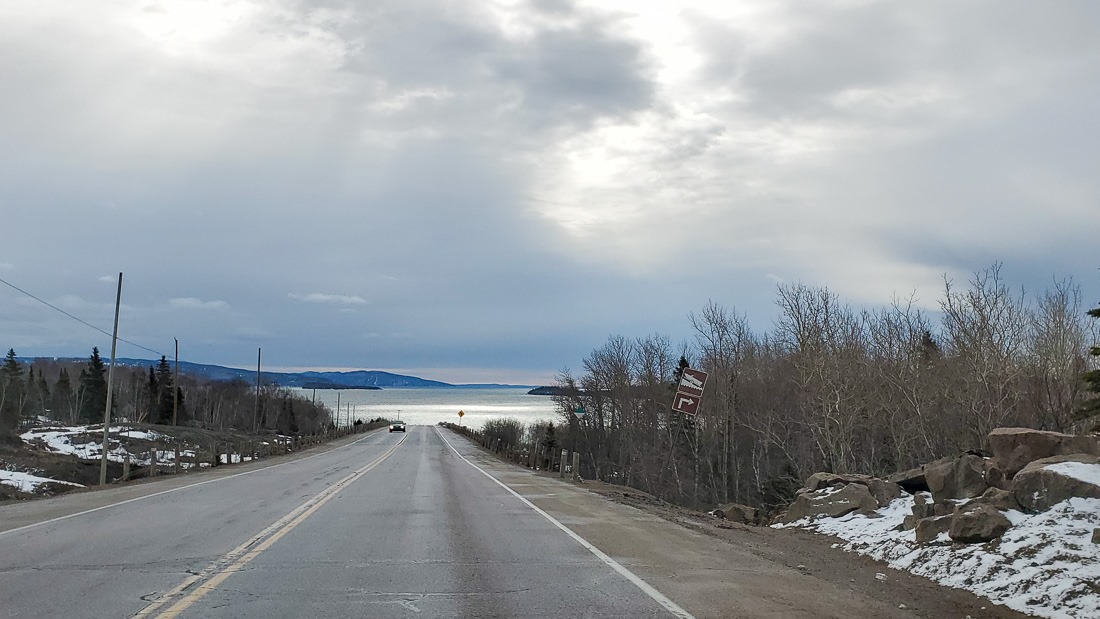 Let’s go down to the waterline

The first evening, we ended up in Nipigon, Ontario. A few hundred kilometers east of Thunderbay. One motel room and an excellent memory foam bed. I was surprised its memory didn’t get it to greet me from a previous time. Still no sign of bad weather. 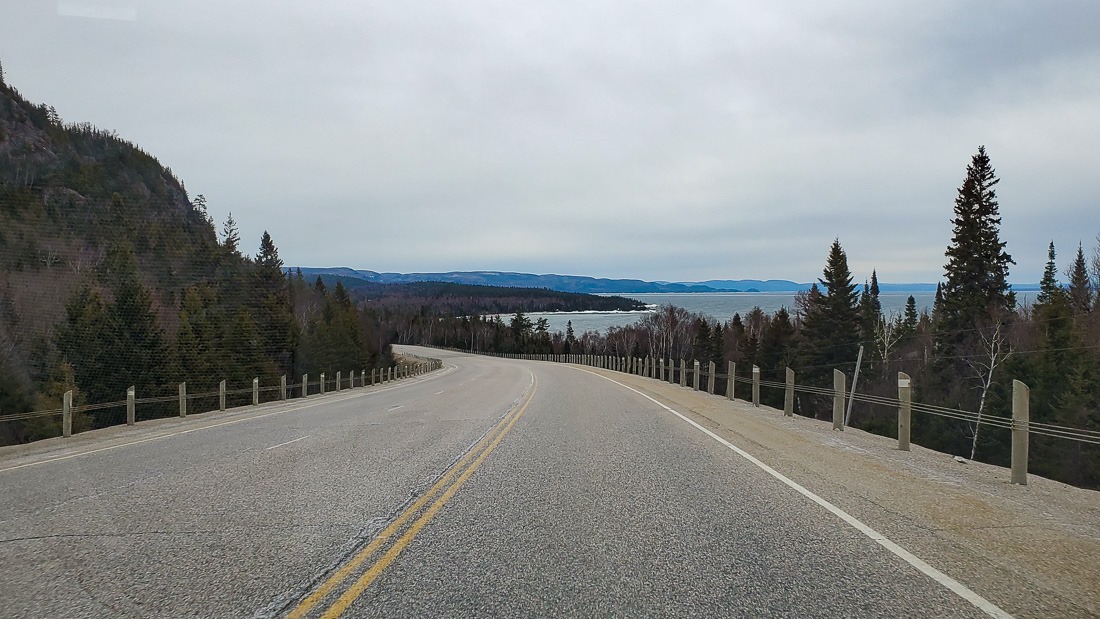 Back on the road eastward was a day along Lake Superior. Mountainous roads, no hairpins, and beautiful but cold vistas all the way. Let’s say that I just love cruise control in my car, but driving in the mountains didn’t seem to agree too much with that. At times acceleration kicked in when I just didn’t need it…

And then we came across tropical beaches, or so it seemed. At closer look the palm trees were pine and the pristine white sand turned out to be packed ice. The picnic table might throw you off a little more. It’s a symbol of better times to come. Off to another night in a motel, this time near Sudbury, Ontario. 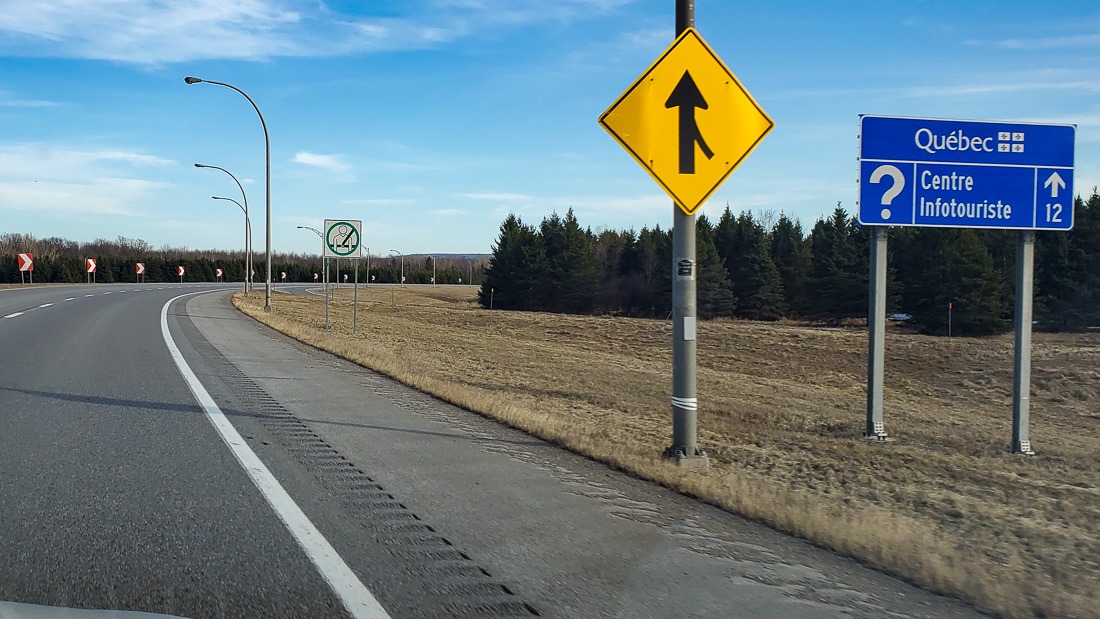 I have no pictures of motel rooms, if you have seen one, you have seen them all. Some have the furniture to the right, others to the left, but that is all that is noteworthy. We also didn’t take five star hotels, perhaps that might have made a difference. After a fun drive at rush hour through Ottawa, we finally arrived in Quebec. Immediately everything is in French. And in French only. Driving style is also very French. 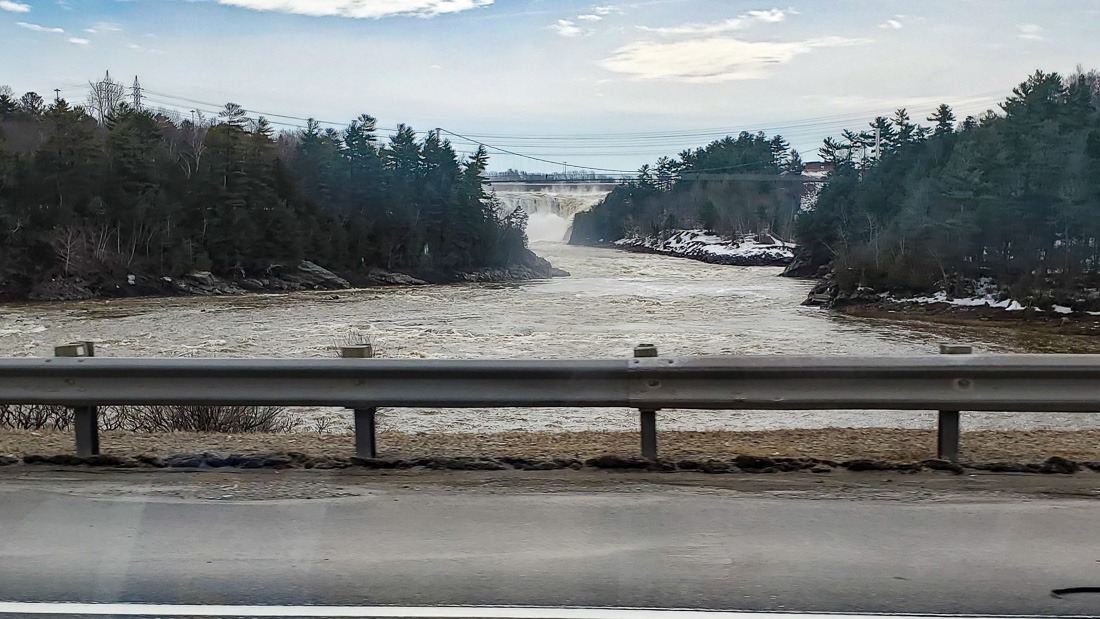 Gone is your personal space behind the car in front of you. If they fit in there, they will take the spot, depriving you of the necessary space to brake should something happen. Happily I am used to that style of driving, Paris and Marseilles are both infamous for that driving style. I can play that game too. 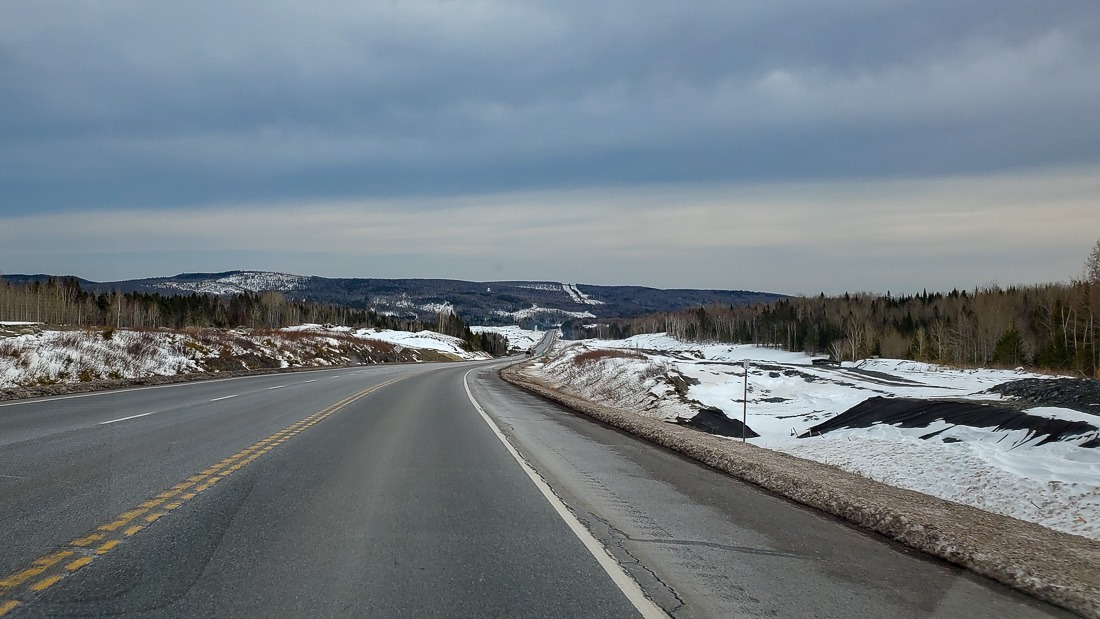 On the way to New Brunswick

Then it was the time to follow the south bank of the St Lawrence River to get around that pesky piece of USA inside Canada. There, the winter had not gone yet and everything was a lot colder. One last stop to get some food… We decided on the small, very promising town of Saint Louis du Ha! Ha!. The first time I have seen punctuation marks in a town’s name. Well, the food that was promised had to be ordered by phone, another place was closed to anyone out of province and the car GPS stated that it had insufficient road data to continue any useful navigation. Ha! Ha! indeed.

We ended up at a Mickey D and had a burger instead.

Then came the entry into New Brunswick. Covid papers in hand, we were asked to show them, not hand them over. We were entered in the system (boy, that guy must have had good eyes to read our driver’s licenses from that distance!). Then we were told that traversing New Brunswick was all we were allowed and that it was only a 5 hour drive to the other side. Move on! 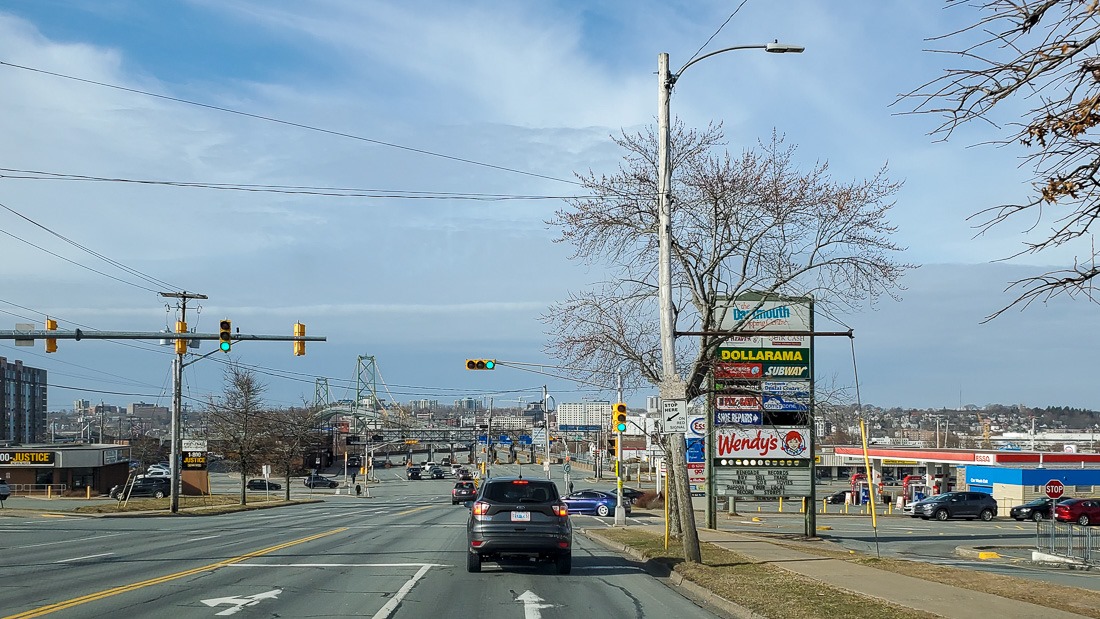 So we drove on. Took no pictures, left no footprints or anything else. Covid hospitality. A few hours later we arrived in Halifax, our temporary home base until we find the place we really like. At least this apartment is close to the boardwalk everyone is telling me to go and visit

. Until now we had managed to stay ahead of the bad weather. Yet it was not far behind.

Now it’s off to 14 days of self isolation, some of the days are gone already. We have a balcony, so cabin fever can be avoided. Local friends are willing to deliver us some necessities. Grocery deliveries can also be arranged. All is well. Now we are asked to monitor our temperatures and stay inside. The usual mantra. By the next post I will have been allowed outside again

. By now, the rain has started and is blowing horizontally across the windows. We have arrived in time.