A few days ago, friends and I decided to go hunting for ghosts. Since there is a small park called Woods of the Spirits in Winnipeg, that would have been the most logical place to find any ghosts, right? So, off we went, while many were invited, only three people showed up. Physical distancing was easier this way. 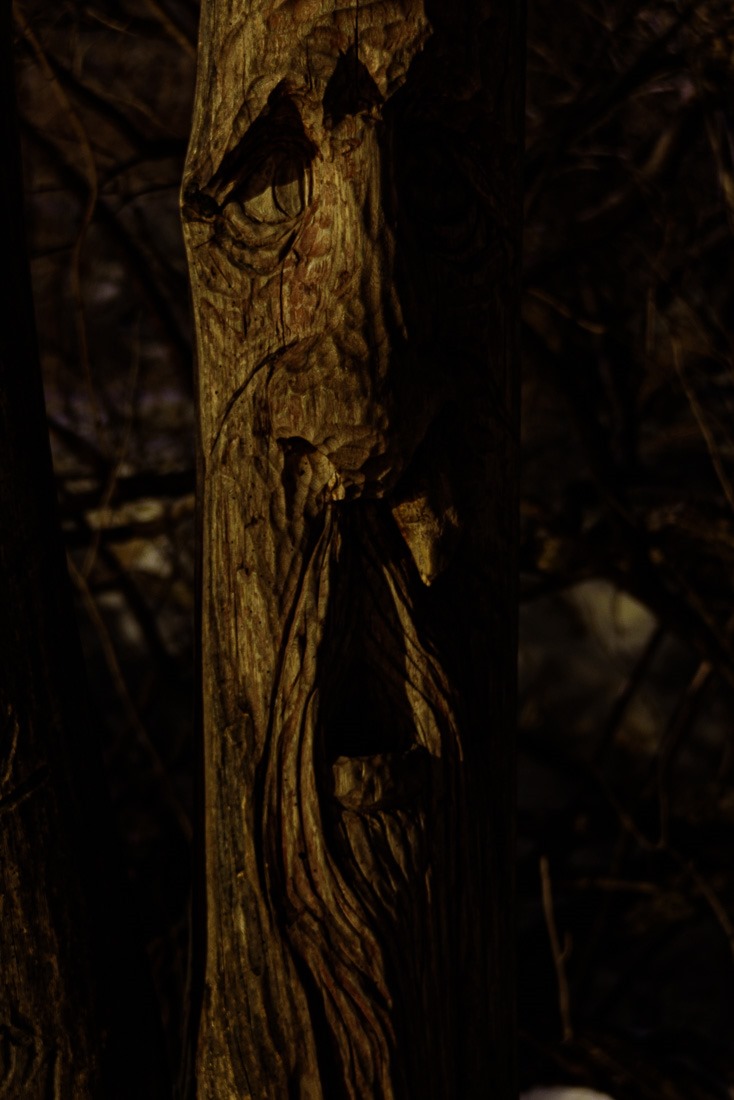 I don’t care much for the term “social distancing” as that rhymes with social isolation to me, one of the causes for mental disorders. If people can get together in a safe way, then half of the isolation problems are gone already, just by showing up.

So we arrived in the Bois des Esprits (Woods of the Spirits, for those who don’t speak or read French) and went looking for the ghosts everywhere. We came across a number of residents in the woods. 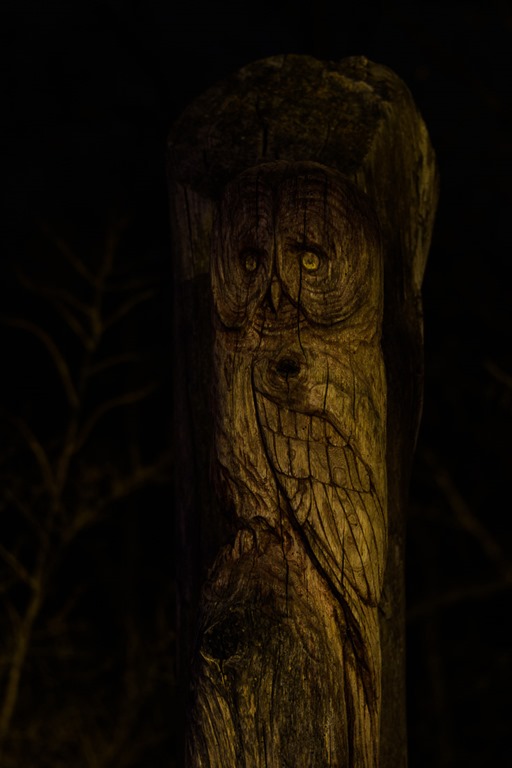 Empty gaze into the night

They are the permanent kind of resident there. Carved in dead trees by Murray Watson (the only one allowed to do so in these woods), the sculptures pop up in several places. During daytime, these are nice, but regular sculptures. 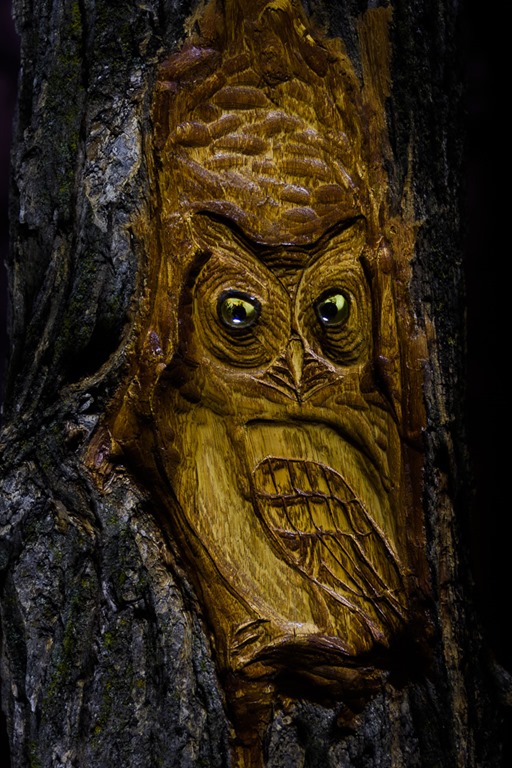 What do you see first?

By night, they come to life and try to show you a different face of themselves. The above owls, for example jumped into my mind as a faces with bare teeth, until I distinguished the owls’ ears. Enough to give you a fright for a second. Once you see the creepiness of the woods, you start to get a feeling for it. The tripod (quite necessary) seems to come to life as well as it slips and slides on the slippery forest ground covered in ice and snow. 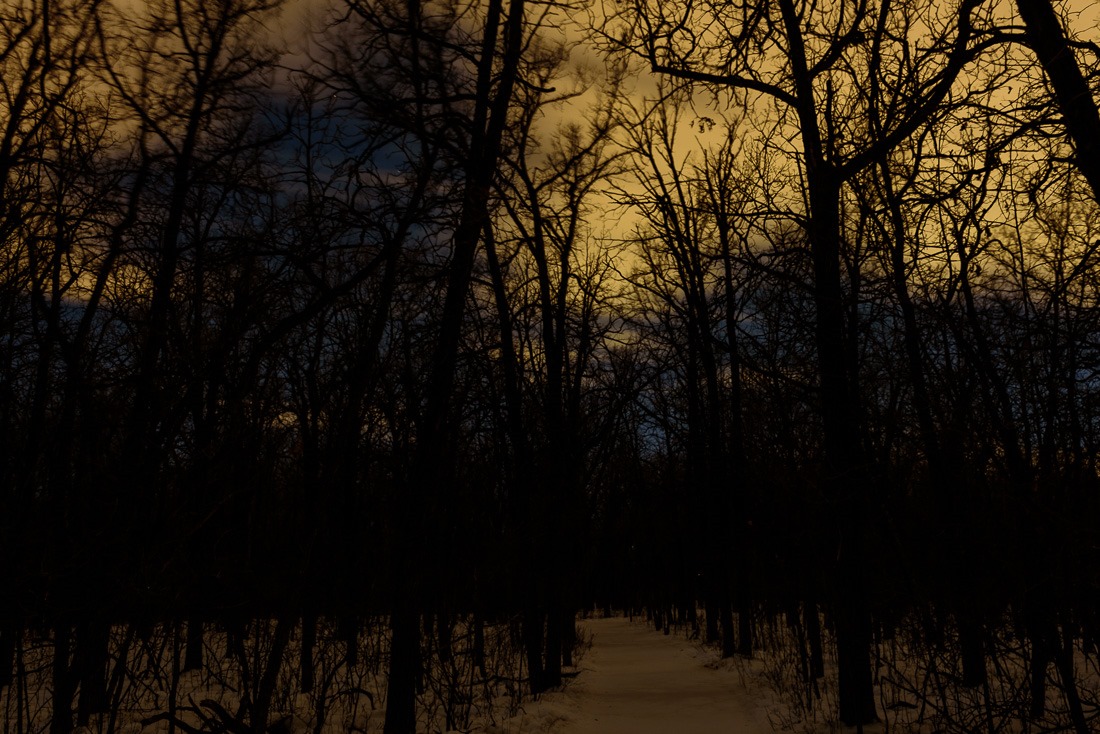 I had the idea of bringing an ultraviolet flashlight with me to light up the snow. The warm temps of that day, however, had melted the top layer of the snow, making it unsuitable for UV reflection. Oh, well… The reflection from the city lights made for glowing clouds in quite unnatural colours. While most of the sodium lights have now been replaced by LED lights, the private properties still use them a lot. 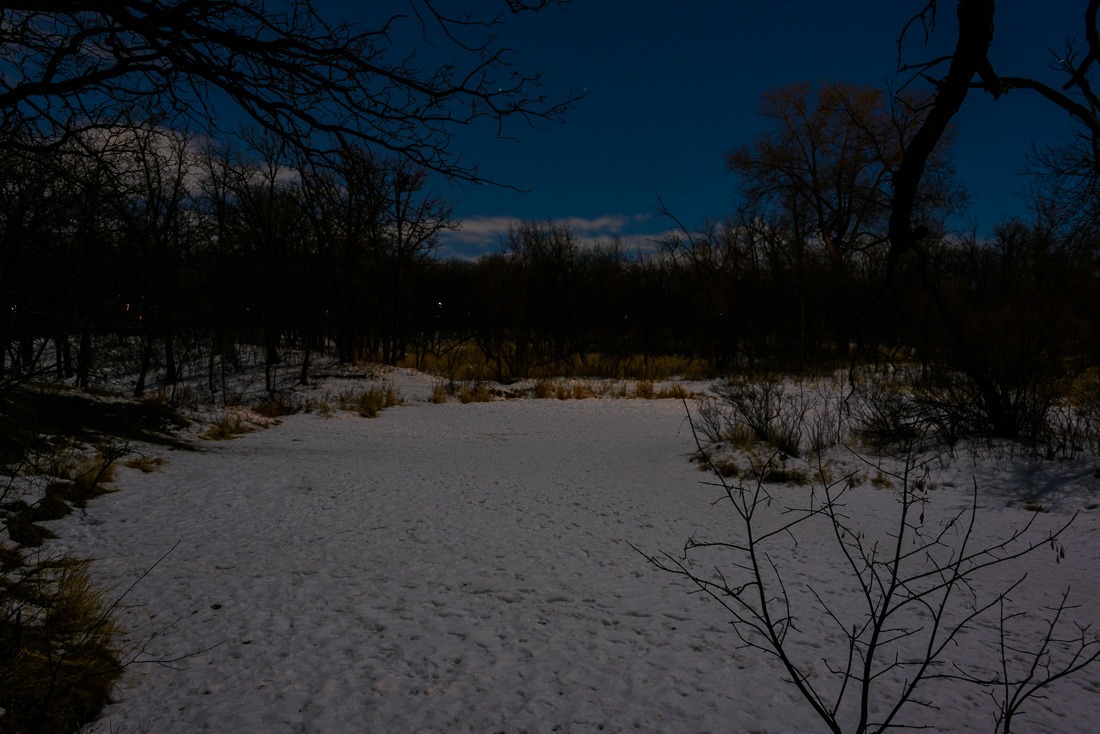 A waning moon still had enough power to light up the scenery over the river. In the above picture you can distinguish stars in the sky, showing that it was indeed night and not a doctored daytime picture. 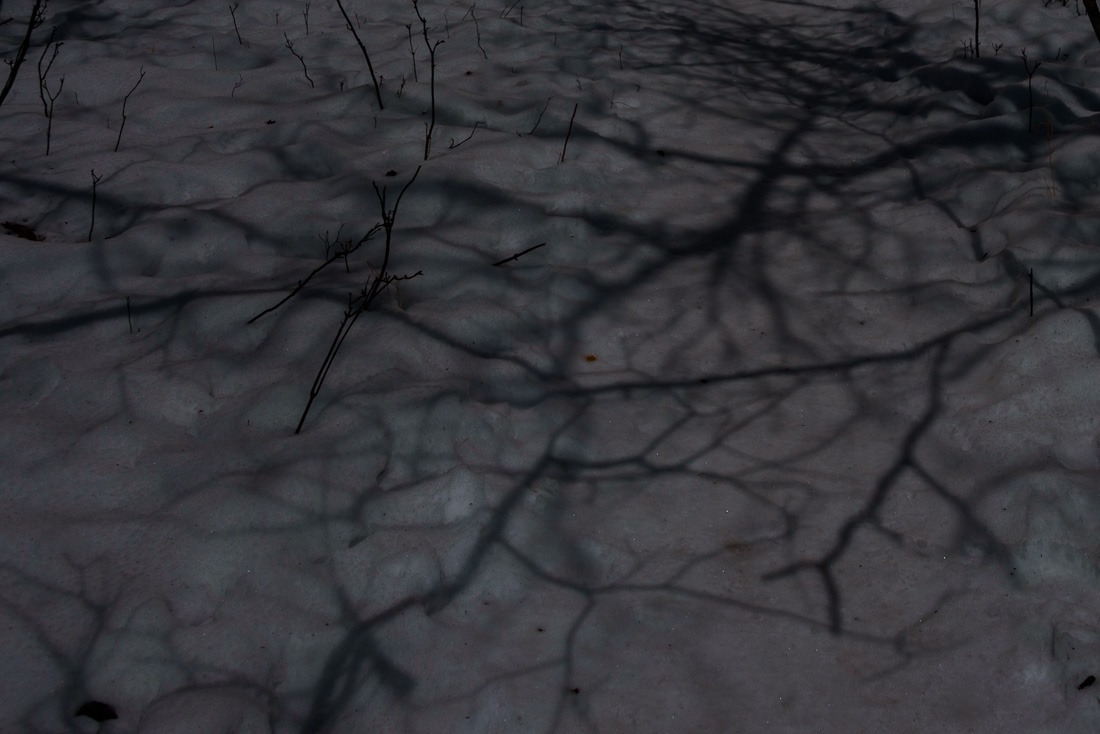 While walking through the woods, the moonlight came and went. At some point, the shadows of the branches on the snow made me think of a medical scan for some security purpose. One shot and this became the veins on the lungs of Mother Earth. Each term taken separately, this this might even be true. Combined, not so much 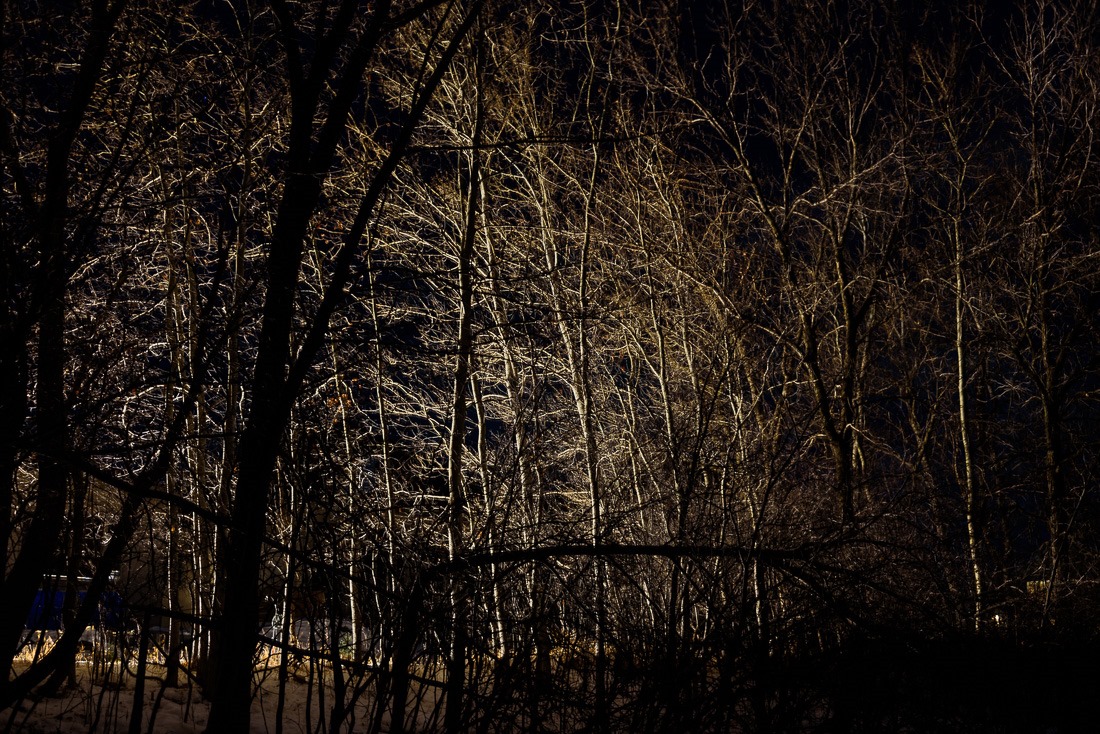 Only the creepy sound is missing

After wandering through the woods in search for Mhitik, we were tired and decided to call it a night. The yard lights of the neighbouring houses made for some scenery fit for the X-Files. Even more when the said scenery decided to take the legs away from underneath us. We decided to sidestep from the path and walk in the deeper, but not so slippery snow instead. 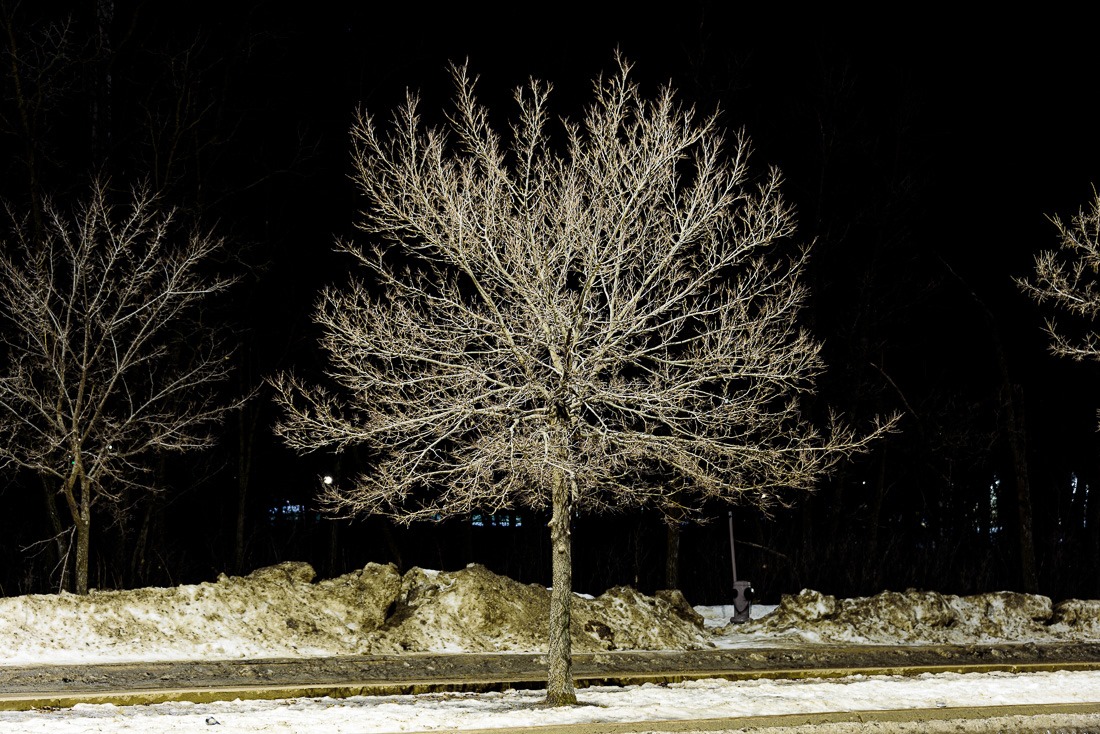 Lit up, but not for Christmas

Once out of the woods, this tree seemed to light up all by itself. Too good to pass up on.

All in all, we spent a few hours having a lot of fun, a few creepy moments and a lot of laughter. That’s how I like my Creepy Nights.