Staycations, well, more or less. I am not one to stay in my house for long unless required by law. And even then, I will probably be outside in my yard to escape cabin fever. Today’s health orders are starting to take their toll on many people. People that have no private transport can hardly go anywhere. 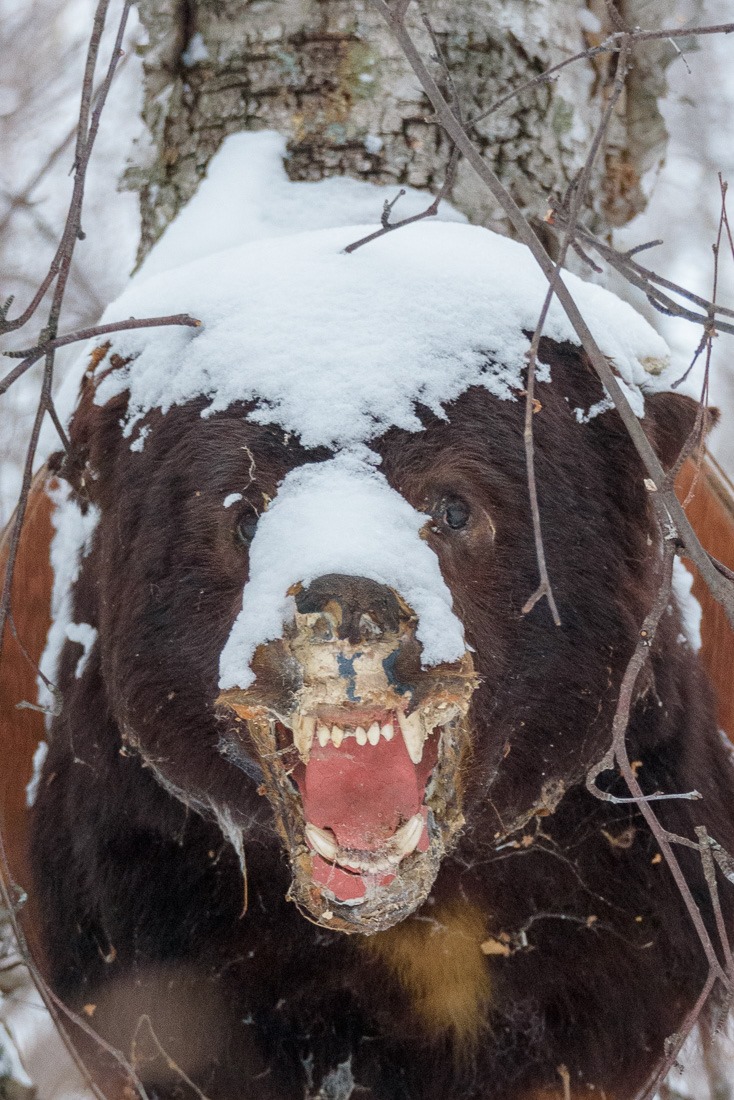 Luckily for me, I still have my own transportation and nobody can pry that away from me. So I still get out, despite all the restrictions. At least the Manitoba government has not implemented any curfews or confinements.

So what were the events for January of 2021? If I go the route many people take nowadays, I’d have to say: “boring! Nothing to do or to see!”. Complaining is easy, yet overcoming the hurdles of today’s restrictions is more gratifying. So instead of staying at home and whine in my mask, I decided to get out, breathe in the fresh, unmasked, Manitoba air in winter. 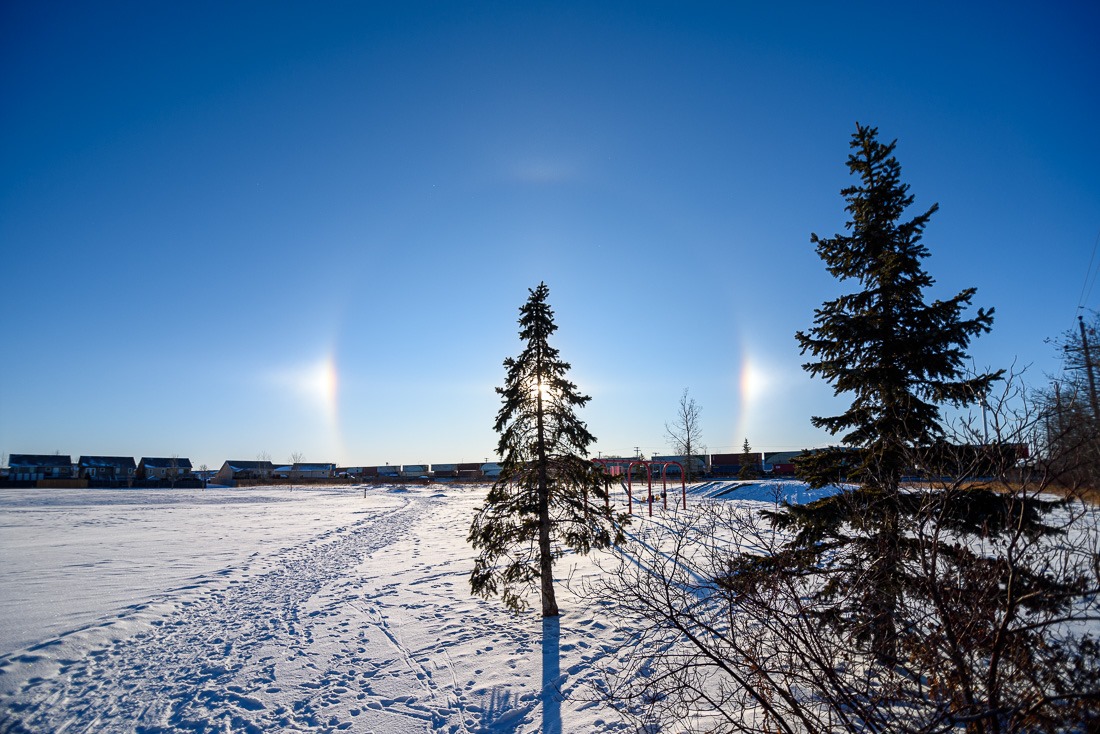 And fresh that air was. When sundogs appear due to refraction of the light through ice crystals, the air is usually cold, very cold. The morning I took this picture not far away from my house, the thermometer was on strike. No red liquid appeared above the little red bubble at the bottom of the scale. I guess it was something like –27C. 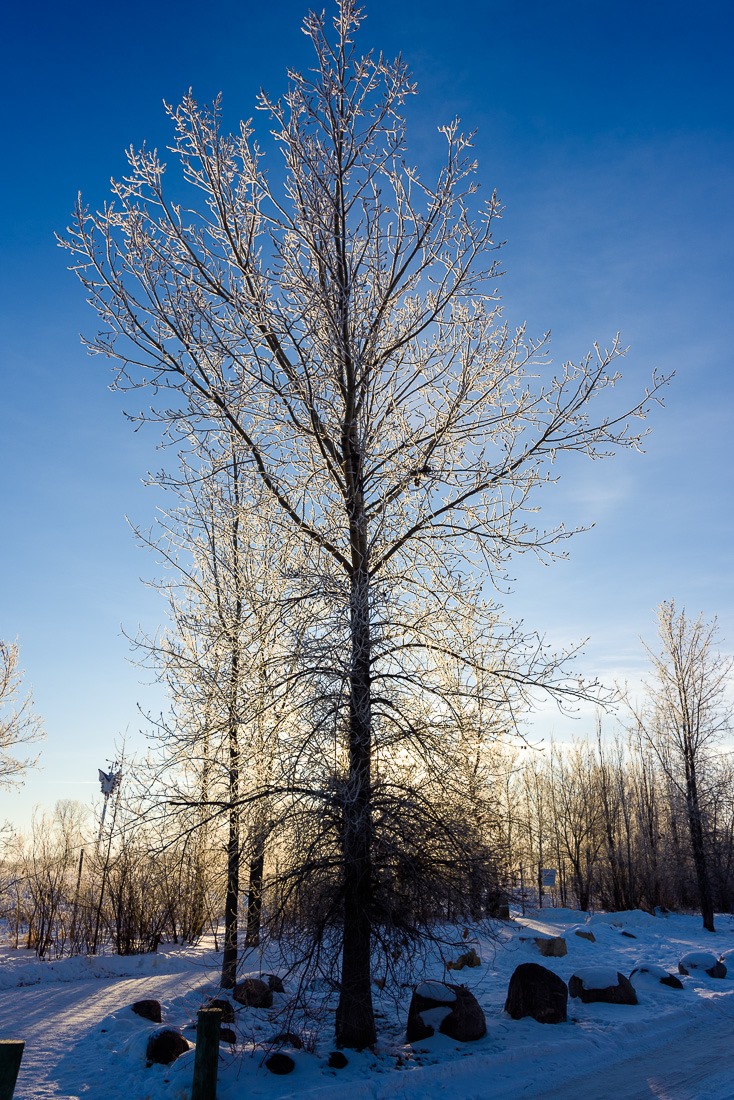 Yet, one cannot keep me inside or around the house for too long. A different day graced us with hoarfrost. That is invariably an event to go and photograph. Hoarfrost can be quite local. When the crystals are thick on the trees at one end of the street, the other end’s trees can be bare. I didn’t have to go very far to get the above shot. 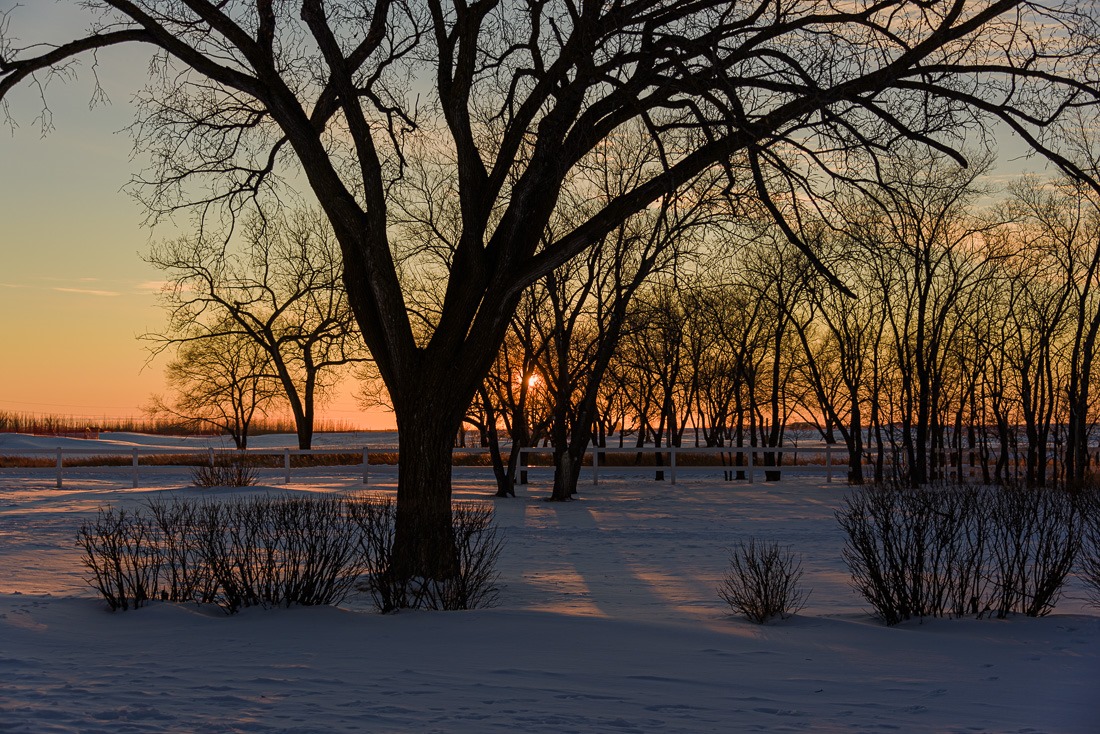 Then wanderlust set in. A little further away are the ruins of St Norbert’s Trappist Monastery. I will have more shots of the ruins in a later post. When a friend and I arrived there, the sun was on its way out (or down). The ruins have a certain attraction on me, but this was by far my favourite shot of that afternoon. 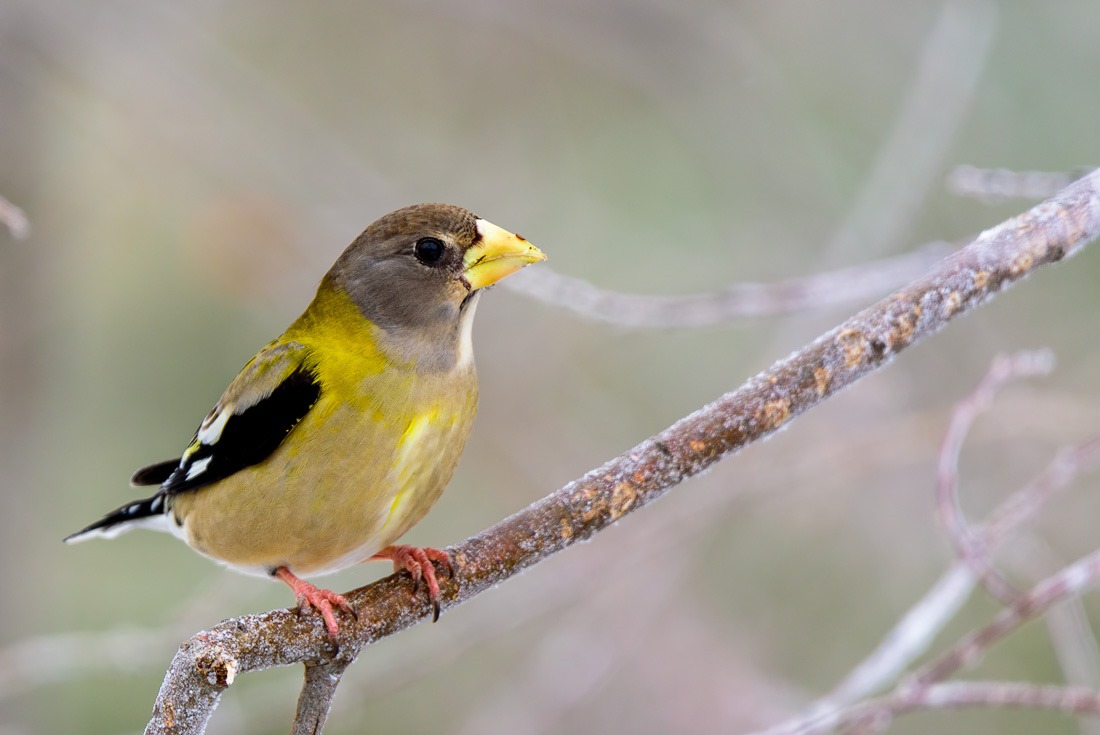 Then I went a little further away to see an old friend in his cabin. Joe has feeders out in winter. I’m thinking that tons of black sunflower seed transit through there. Yet photographing birds on those feeders is not the best way to get nice bird shots. Shooting them away from the feeders, while they are eating the seeds or waiting their turn to crash down on the food is a way better moment. 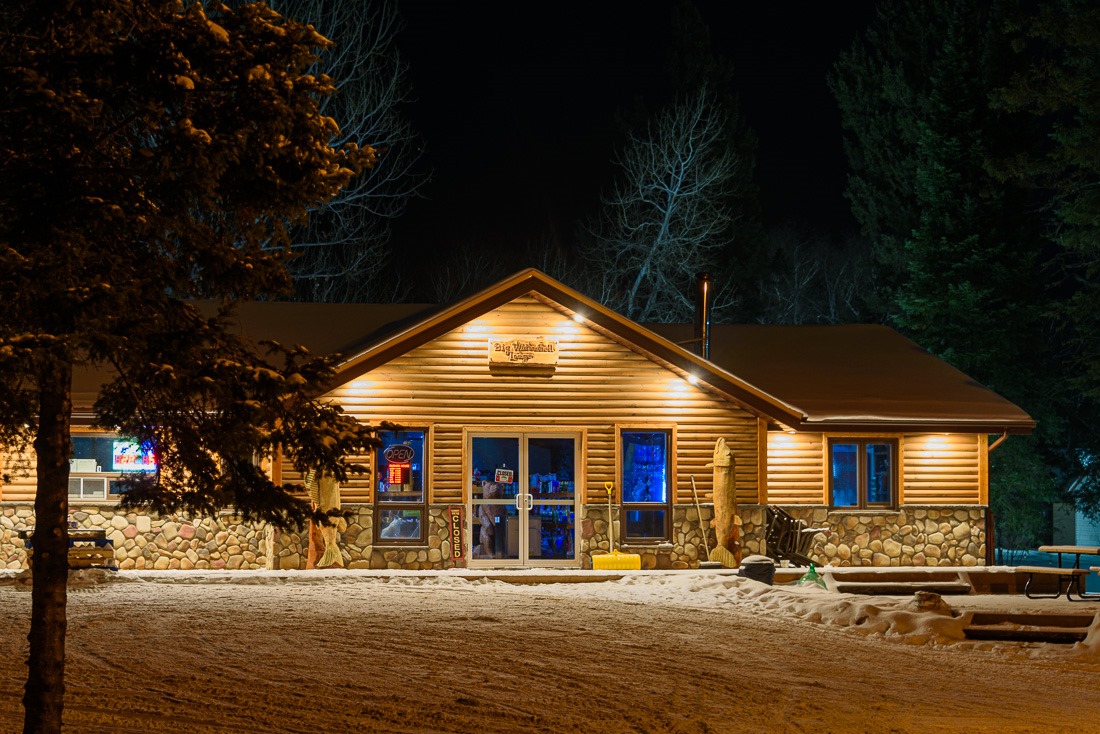 One can shoot birds only for so long before the shots pile up in your Lightroom catalogue with similar, if not identical pictures. So I needed to find something else. Off to the Whiteshell Provincial Park. Spending a few nights in a cabin, far away from the masks and restrictions of the city. 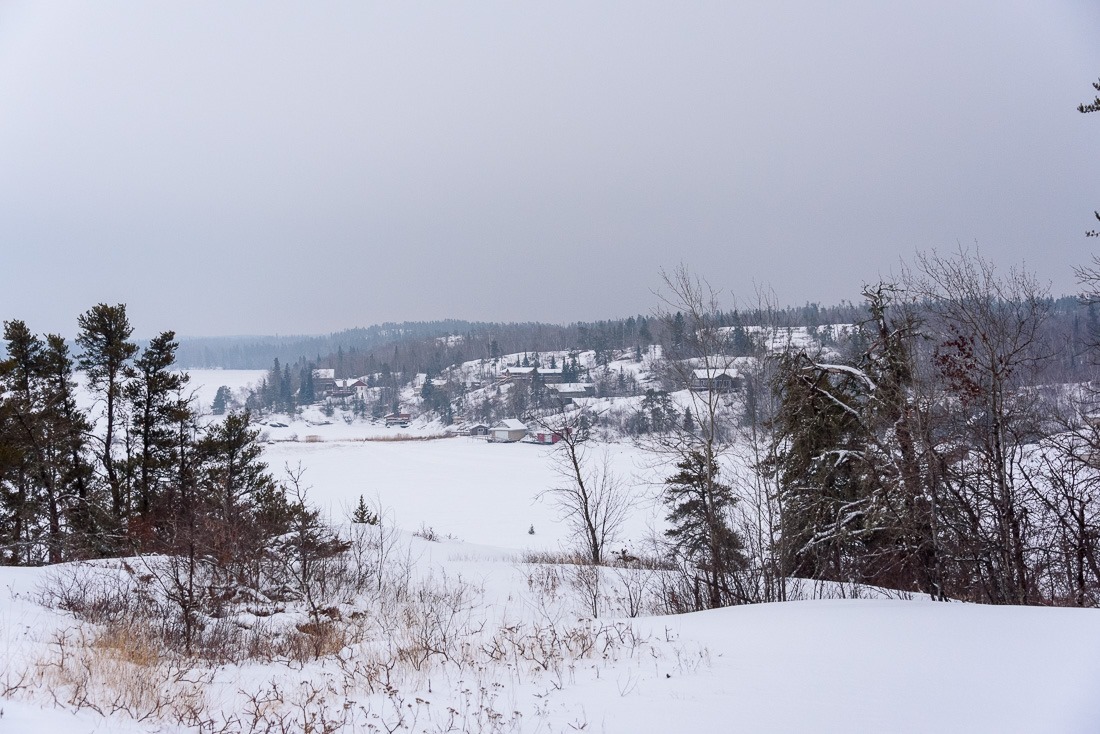 The next morning was not a sunny morning as we had expected, the grey sky was trying to eat up the landscape. So instead of going hiking to take more pictures, we went for a ski trip across the lake. All was perfect, until we rounded the first corner. A sharp, cold wind tried to cut off our respiration. We cut the trip short and went back to the cabin to enjoy some well deserved liquid made in Gimli, Manitoba. 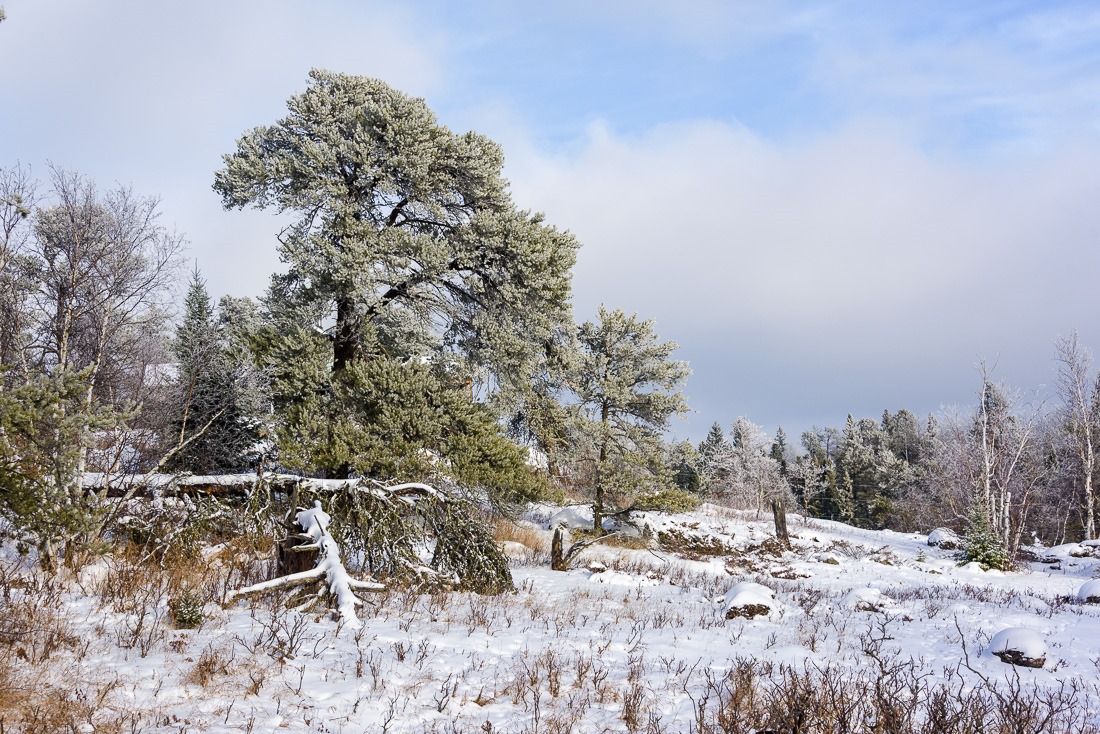 The next day was more conducive to picture taking. With the provincial health restrictions in place, we should have been self-isolating after seeing the above area. It is a few kilometers in Ontario. Yet, the road leading there though Manitoba is the only one to get there. I guess the people of Ingolf, Ontario would have to spend all their time in self isolation? 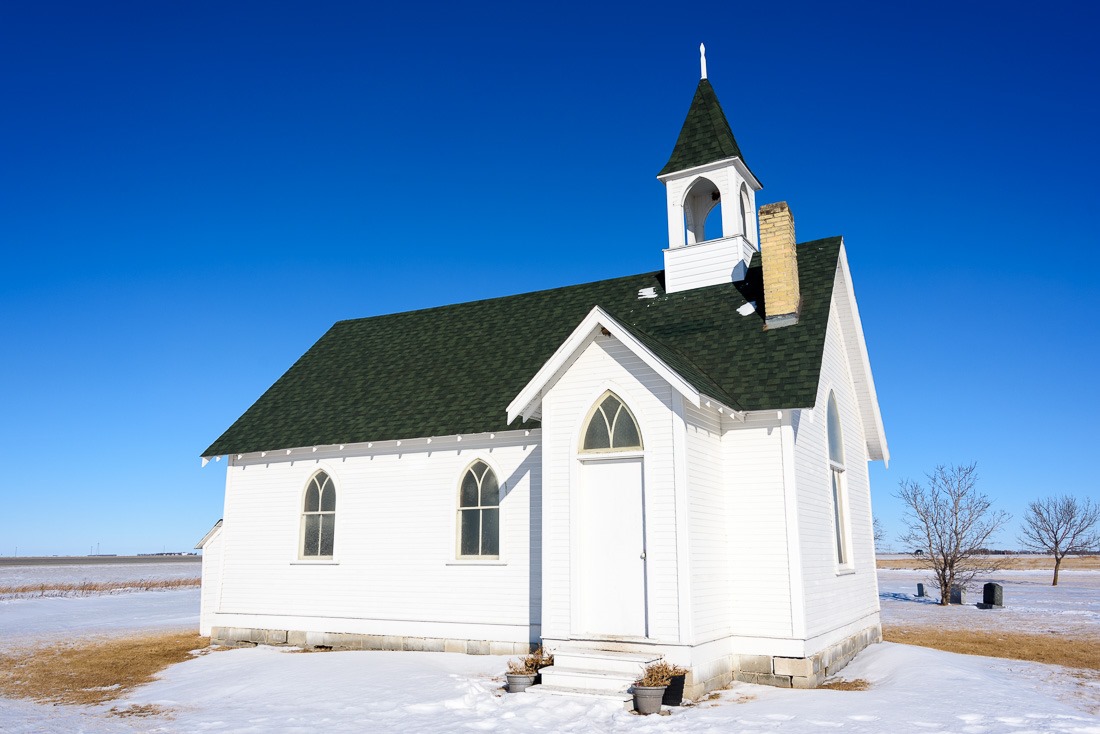 Of course, I am pulling the reasoning into the ridiculous here, but rules are there to protect. At least some. A different day, we decided to get out on Highway 75, south of Winnipeg. Just to find Union Point Church. A church that is situated between the two lanes of highway 75.

The church is owned by the Union Point Church Association which is run by local families who look after the church and the grounds. The door is always open (as it should be in any church) and one can sign a guest book if desired. Apparently services are held there once a year, somewhere in June. It is a big attraction for weddings in the summertime.

That is the way we decided to keep ourselves to ourselves. We are still lucky to be allowed to do this, as many other places in the world are far stricter with travels or even daytrips.