When Alf A. Hole started his Wild Goose Sanctuary in Rennie, he didn’t know that 70 years later the sanctuary would still exist. Now the place is quiet and pleasant for a Saturday in the wild. 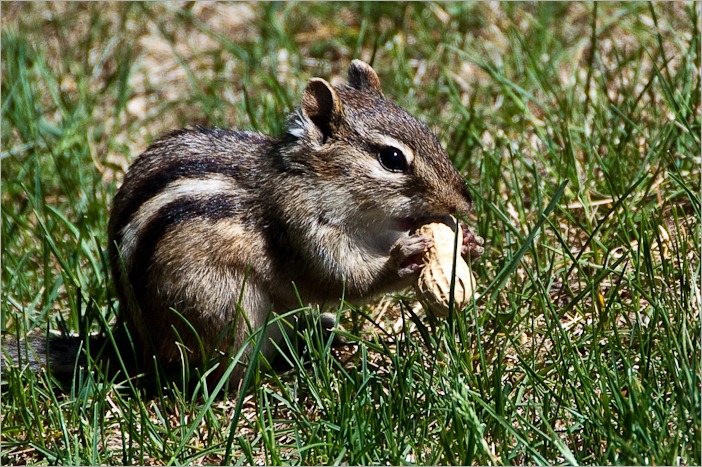 Guest at the table

In the beginning we went for a bite, with some unexpected but welcome visitors. This little chipmunk was happy with a peanut. I always keep peanuts in my camera bag for this kind of opportunity. You peanut, me picture, everybody happy.

The Whiteshell provincial Park in Manitoba is vast. So vast that we only could go to the outskirts of the park without any camping equipment or even extra clothes for staying a night in a lodge. So we opted for a quiet day with a return in the evening to Winnipeg.

The Whiteshell is an old mountainous range of to 500 million years, since then most mountains have been reduced to hills, with lakes in between. Lots of lakes. And lots of mosquitoes.

We just arrived in the park near a place called Rennie and stayed there for a little picnic. The first place we found was a Wild Goose Sanctuary, founded in 1938 by Alf A. Hole. 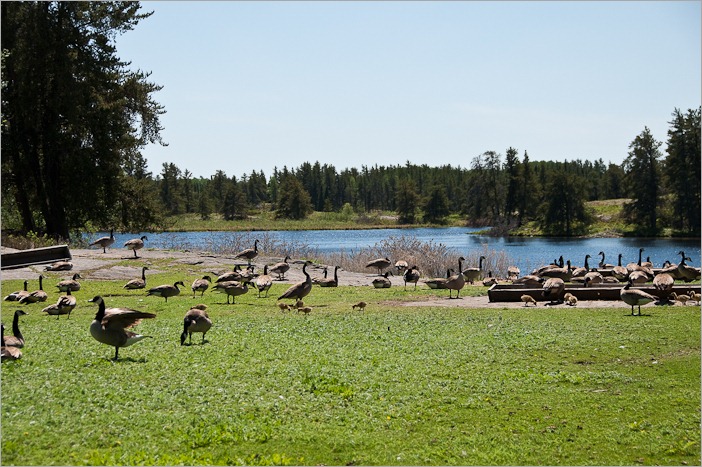 You are kindly requested to stay behind the (low) wall and keep your dog in your car. This was the period of the goslings, many can be seen here. The geese are really calm and do not fear people. Apparently they know they are undisturbed here. As they are in many other places in Canada.

The lake here is a little artificial lake, about 1m higher than the natural lake, I think. It is closed on one side by a little dam, constructed by Ducks Unlimited.

The runoff of this dam was a nice place to take a picture. The water seemed brownish, later I understood that the lake contains lots of vegetation that colours the water. 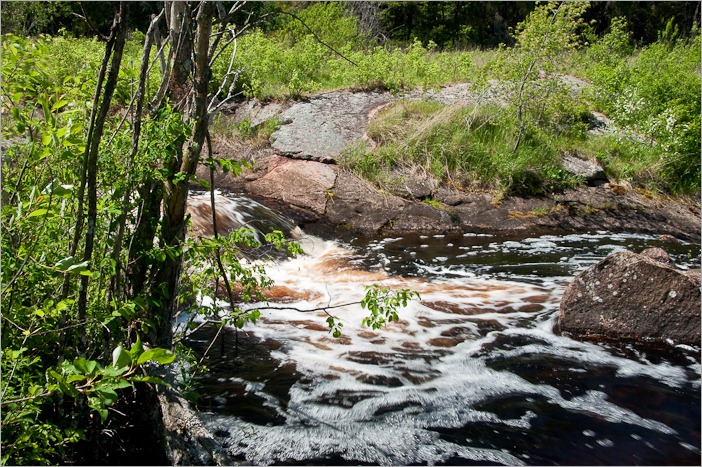 Runoff from the dam

Around this lake the quietness was overwhelming. Only the birds and the wind made noise. Since dogs were not allowed here… The wind, however, made sound recording impossible.

Different view of the water. I didn’t take my ND filters with me (shame on me) so I couldn’t go for the dreamy effect with the running water. 1/20th of a second was as low as I could go. 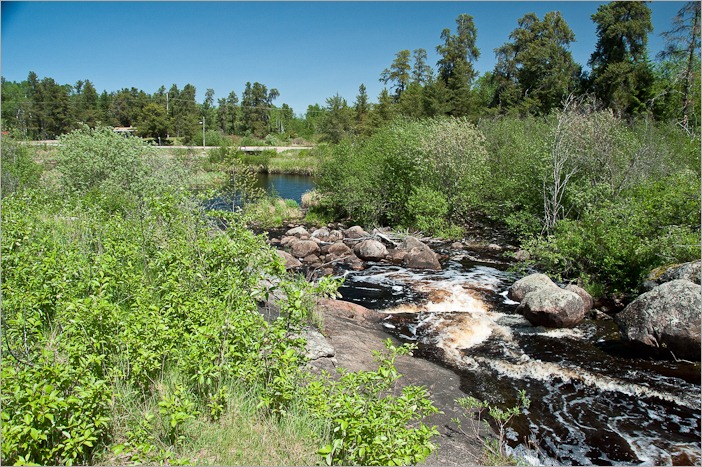 The other side of the runoff

A walk around the lake was one of the things I wanted to do as soon as I saw there was a trail made for this. It was quiet (didn’t I say that already?) and, well, exactly what we needed after a week of hard work. 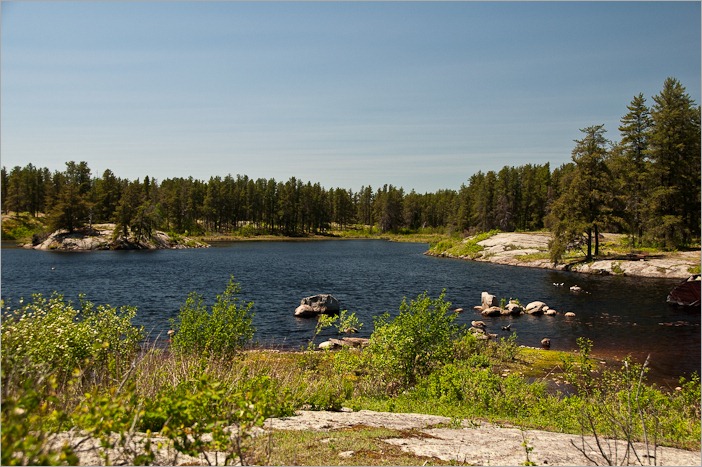 The ancient people in this region (now called First Nations) used to place flat stones one on top of the other and make some kind of humanlike figure out of it. The figure was supposed to point in a certain direction, only to be understood by them. In the park there are lots of these figures, although I have some (reasonable) doubts that they are originals. 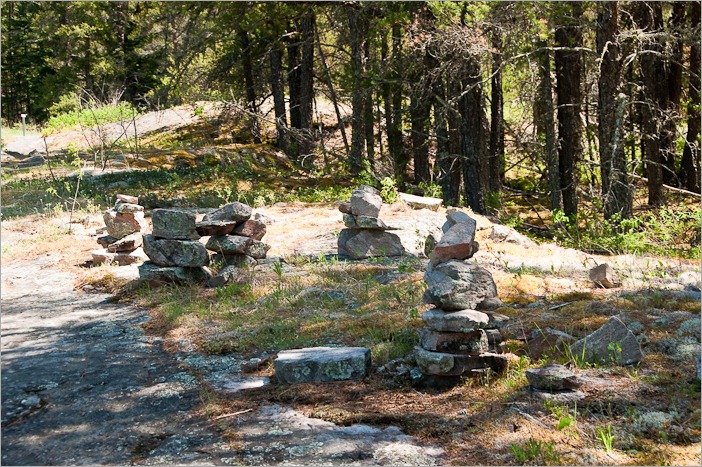 As you may know from the last Olympic Winter games, this figure is called an Inukshuk. More than one will be called Inukshuks in English (?) and Inuksuit in Inuit language.

The inukshuk is also portrayed on some special one dollar coins in Canada: 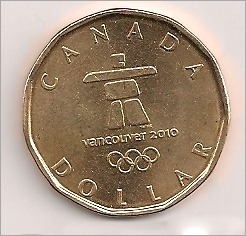 On the other side of the lake I decided to play a little with my polarising filter against the blue sky. When making wide shots of a sky with a polariser, the sky always seems to darken on one side and lighten on the other. So a smaller field was needed. However, the colours came out so brilliant that they were hard to believe. 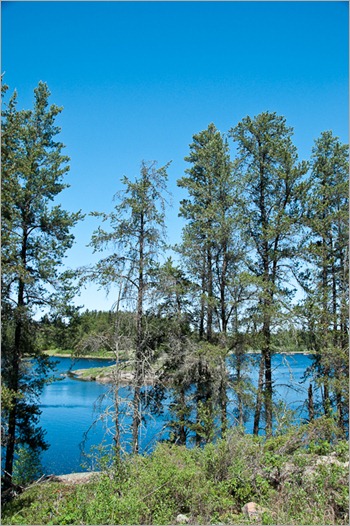 The colors are bright, bright enough to be nearly painful to the eyes. And still it was exactly how it looked over there. A magical place. Magical enough to make your feet wet in the grassy parts near the water. The lowest parts were “paved” with logs, held together with steel cables. 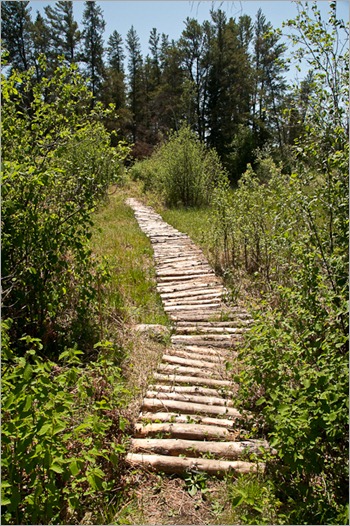 Obviously you have to watch your step, but the logs stay nicely in place. Once back in the car we went along route 44 in the direction of Ontario. But Ontario was a no-go zone for us with a rental car. No need to upset any insurance or rental companies. We’ll do that later.

One thing is sure: we will be back in the Whiteshell Provincial Park and stay there a few days in a lodge and go fishing perhaps. And we now know that chasing wild geese in the park is not allowed. Good for the geese.