Once we start writing about the weather, it’s already obsolete when the post publishes. That’s a well-known fact. By the time this post goes online, the temperatures will have changed already and will make a liar out of me. 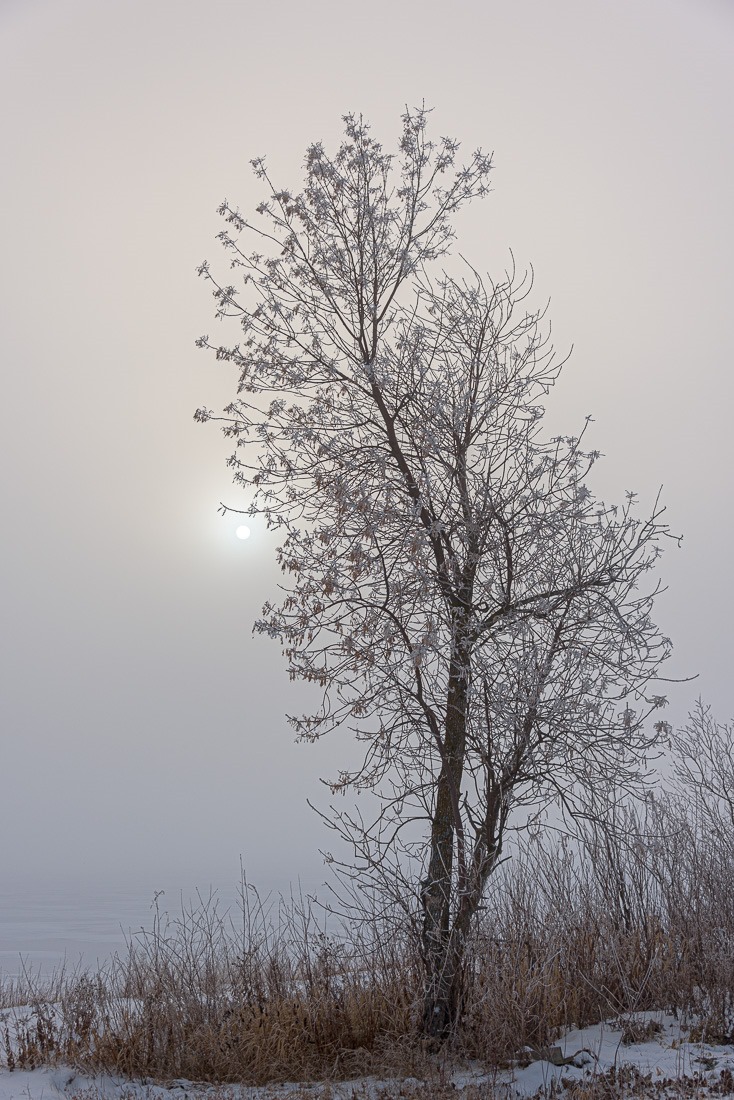 The fun part is, though… you can post anything at anytime in the year and nobody will ever see any difference. Nobody will suspect any “foul play” as that is the nature of the internet.

Nobody is expected to blog about fresh news, it can be hours, days or even years old. Blogging about new cameras is a bit different perhaps. One cannot go and post praises over the “latest” Nikon D40 camera (introduced in 2006…), yet pictures of winter, snow or birds are timeless. 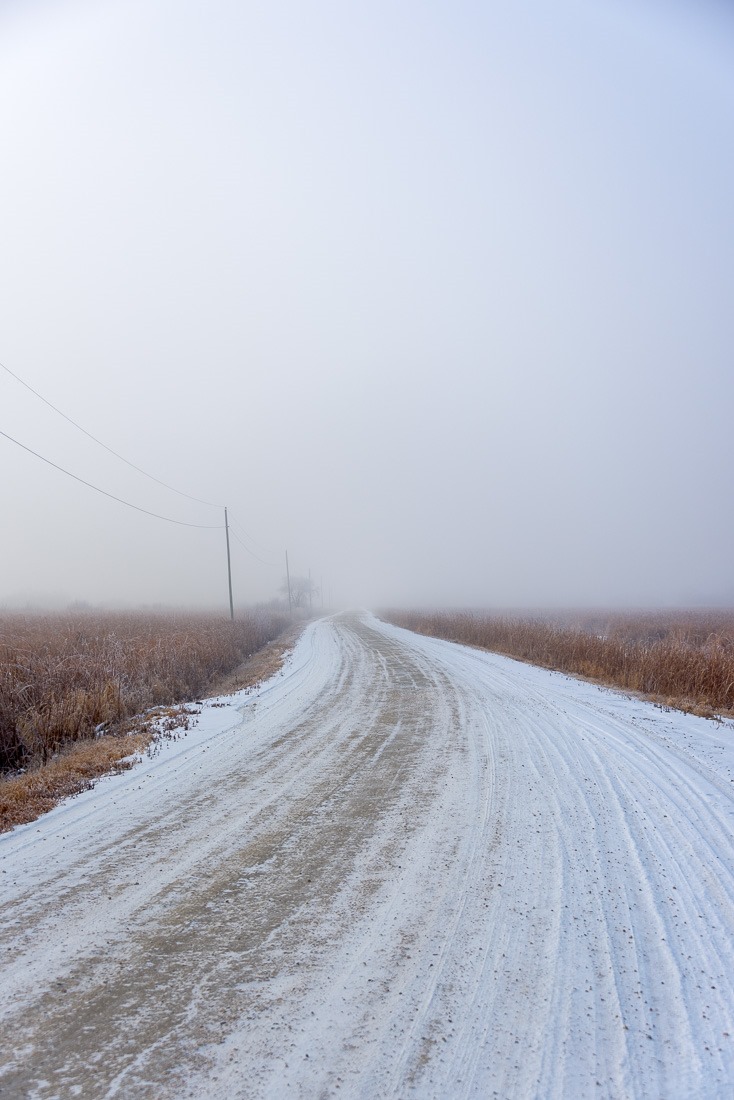 Into the mist and the unknown

I recently acquired a new camera, a Nikon D750. So the pictures here are from that camera. Some of them are mere test shots, without any artistical merit. As usual, new gear needs to be tested and tried before putting it to serious use for a serious job.

While I have been in the Nikon “family” for a long time, a new camera always does the usual things a little differently, with either more options or radically different settings. This goes for the D750 as well. 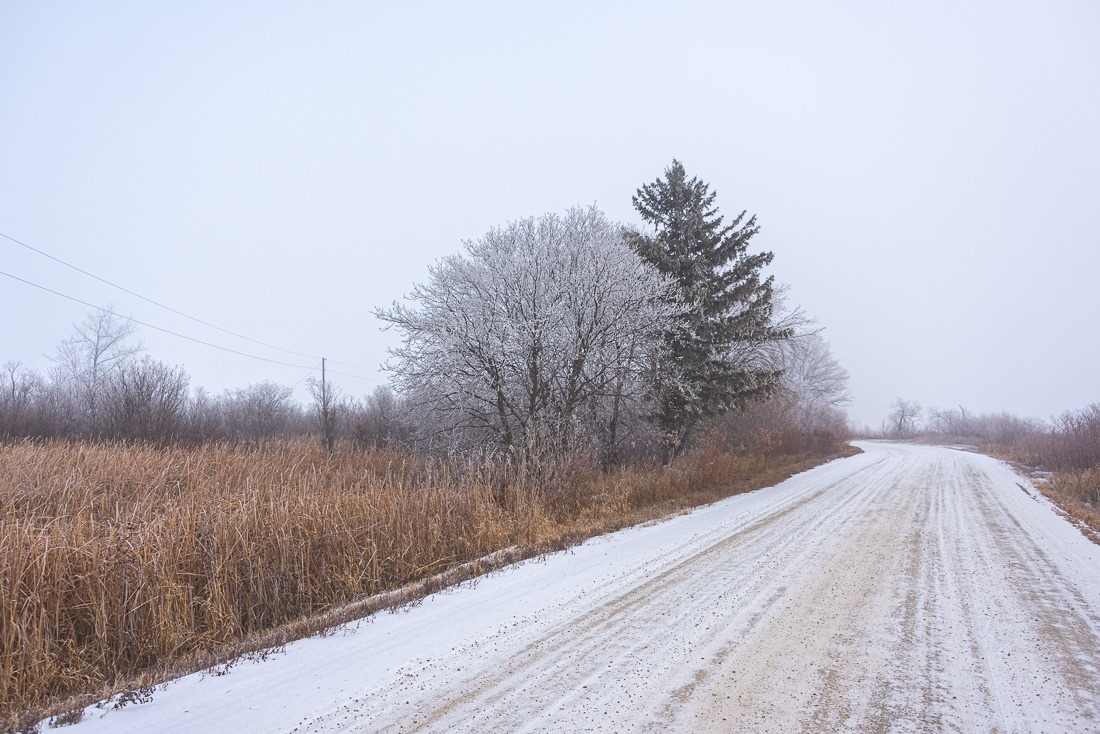 This post is not about bragging about a new camera, though. It’s more about the slow start of the Manitoba Winter this year. While ice-fishing is already in full swing for some, the ice is far from trustworthy for vehicles of any kind. That means the ice is about 5 inches thick, enough for humans, but not for cars or trucks. 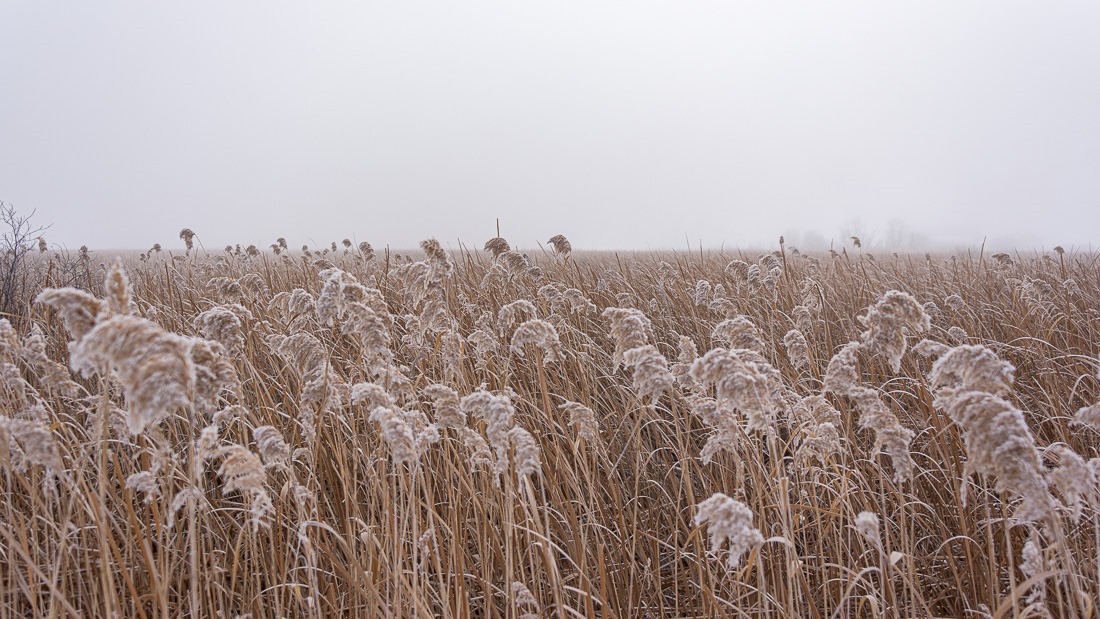 Snowfall is also a bit late. In previous years we already had had at least 10-20cm of snow by now, but this year not so much. Higher temperatures have kept the snow away from the prairies. It’s easy to scream about “Global w…” or “Cl… change!” but we really don’t know the origins of that for sure. Some will blame the industry, others will blame the sheer number of humans on earth or the sun’s cycles or even the natural shift in climate over the ages. 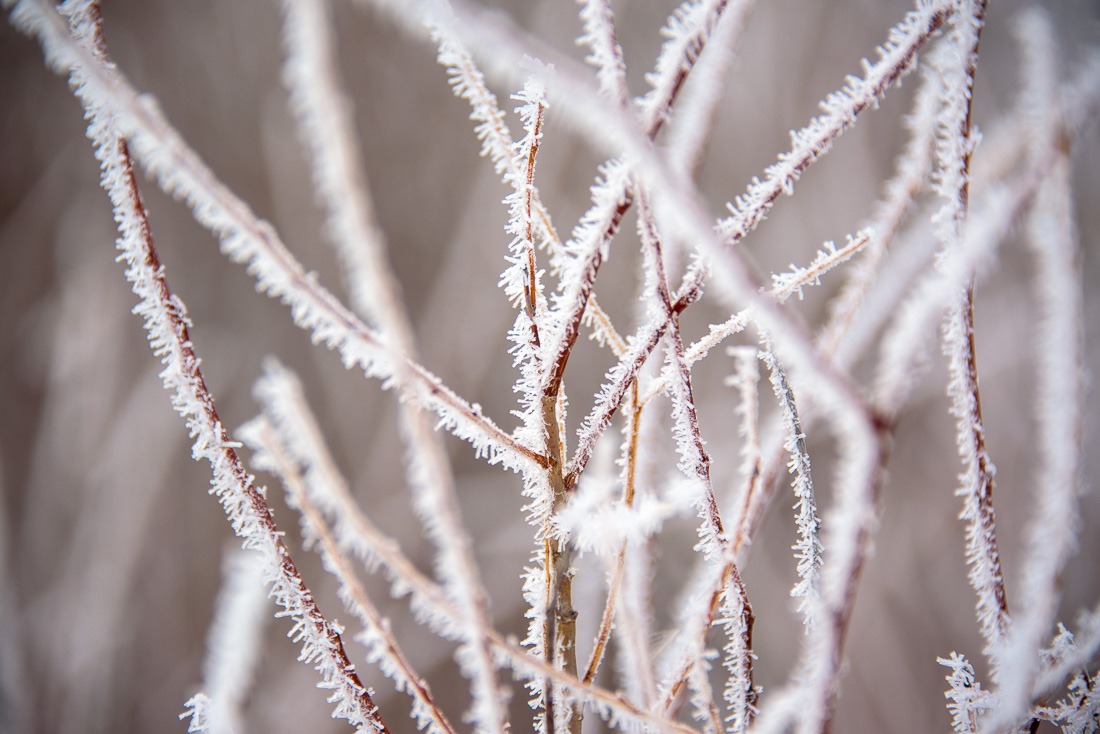 I don’t want to go into a debate over this. People who know me closer will know my opinion and often don’t agree with it. That’s fine with me

. Yet one thing is undeniable here, winter is off to a slow start. With temperatures above freezing in December, snow is not going to stick to anything anytime soon. 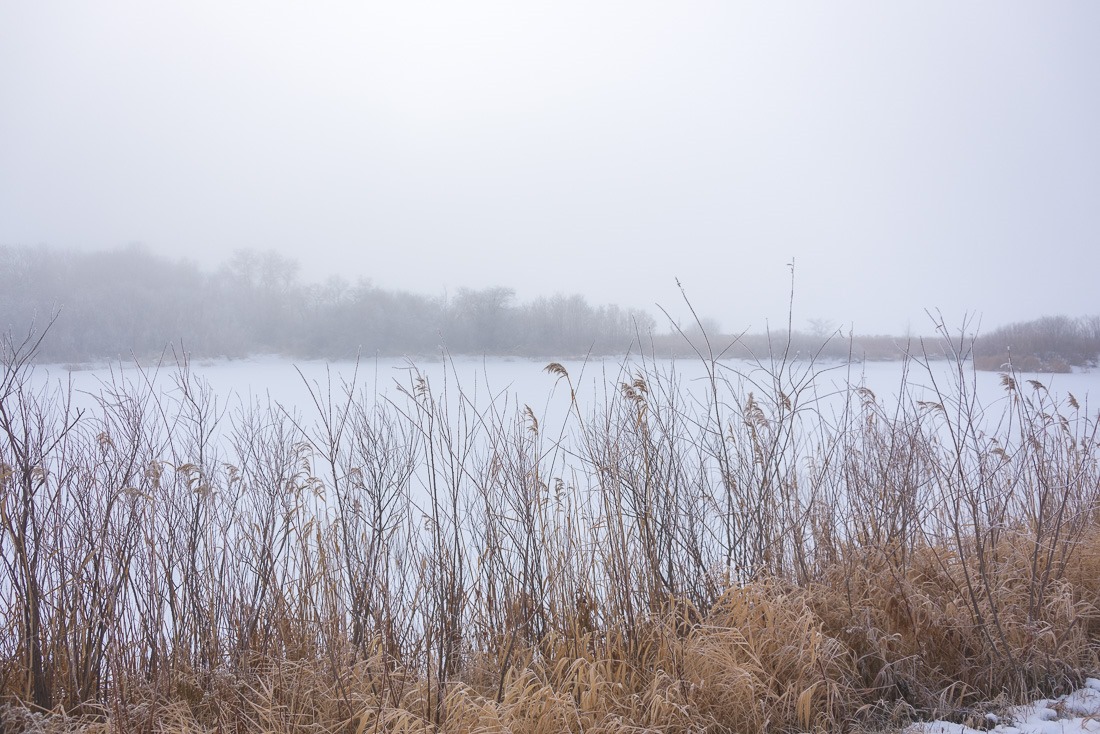 A pond on Willow Island

It does mean that the nights may be able to produce fog and if it is cold enough, hoarfrost will form in some places. Hoarfrost is somewhat magical to any photographer as it remains visible only for a very short time. Both a slight breeze and light sunshine will make it disappear. So when last Sunday there was a chance to get hoarfrost in the province, I decided to drive there as soon as I could. All the pictures of that day are on this post. 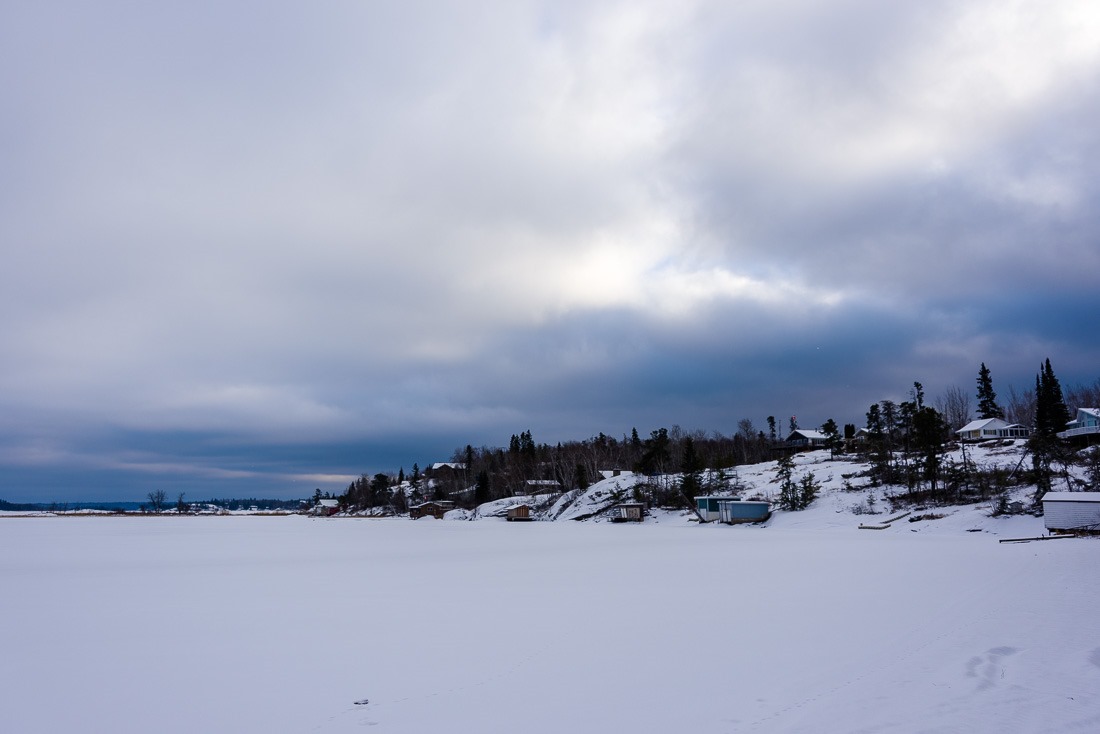 Apart from this last picture which shows us the promise of snow. Yet it did not deliver any. The snow cover in this picture is barely a few centimeters thick, not even enough to cut ski trails in without hitting grass or rocks.

Well, who knows what this winter will bring. There is hope for a decent White Christmas, though. Now if only we could celebrate that with family and/or friends…