When you go out to shoot something in Manitoba, you inevitably come across rust. Not just the rust on your own car from driving over backroads and through puddles/potholes, real rusty items. Items that were once treasured possessions. Possessions reduced to rusty blobs, abandoned in fields somewhere. 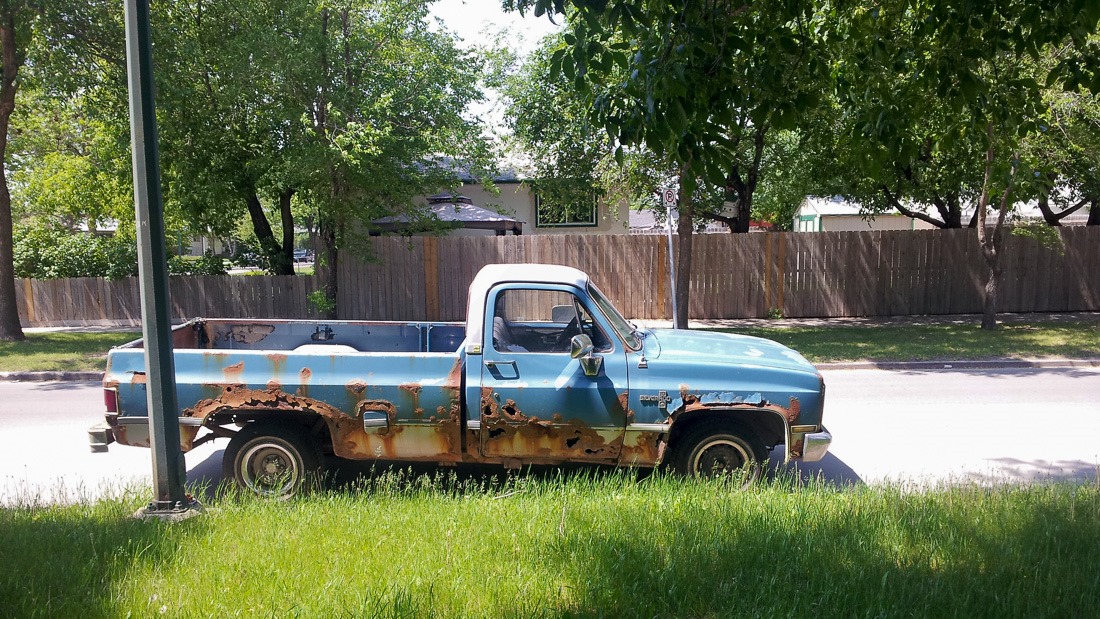 While this truck was still in working condition, I had the impression that it was very much prized rust.

When people by a vehicle, they usually buy one in good condition. All in working order, not too much rust anywhere and still good for a few years of service. Once that term of service runs out for some reason, be that old age or fatal failure of some component, the vehicle comes to rest. 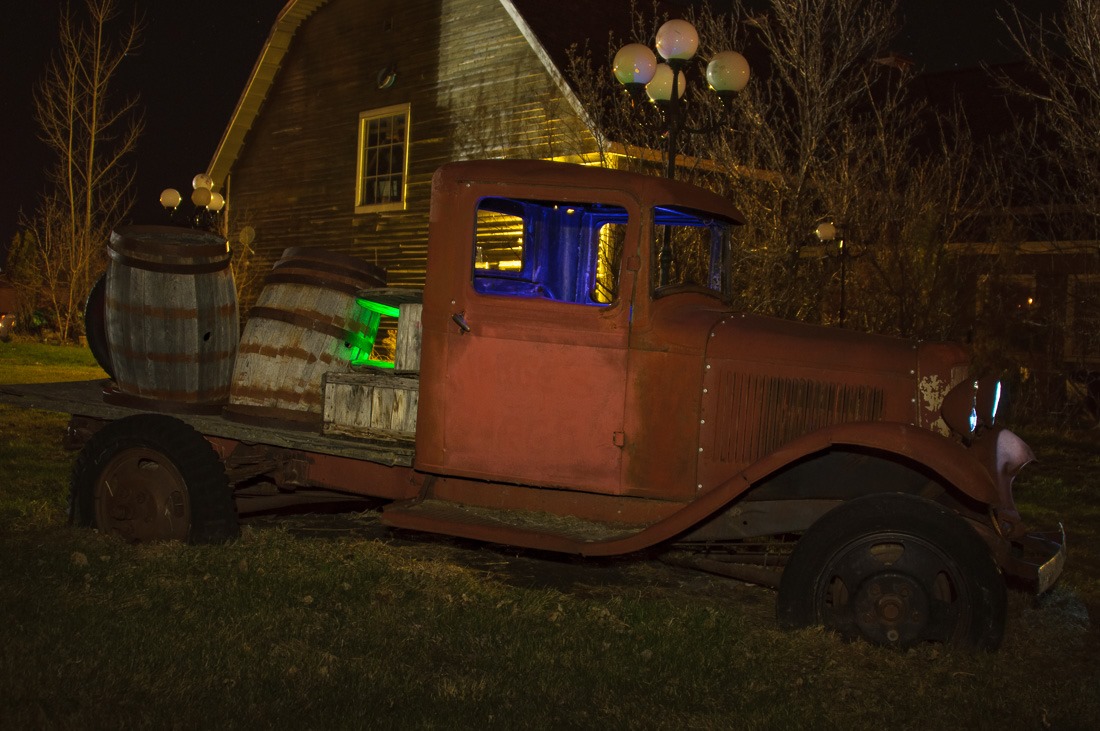 Often enough that will be the scrap yard, where still usable parts will be removed, resold or repurposed, while the rest is being recycled in the best of cases. Rarely are they repurposed into museum pieces like the one above. This truck was parked outside, dressed up as a beer truck (I checked, no beer left in those barrels, BOOO! ). With a little ad hoc lighting from small LED lights I could still get a fairly interesting picture out of it. 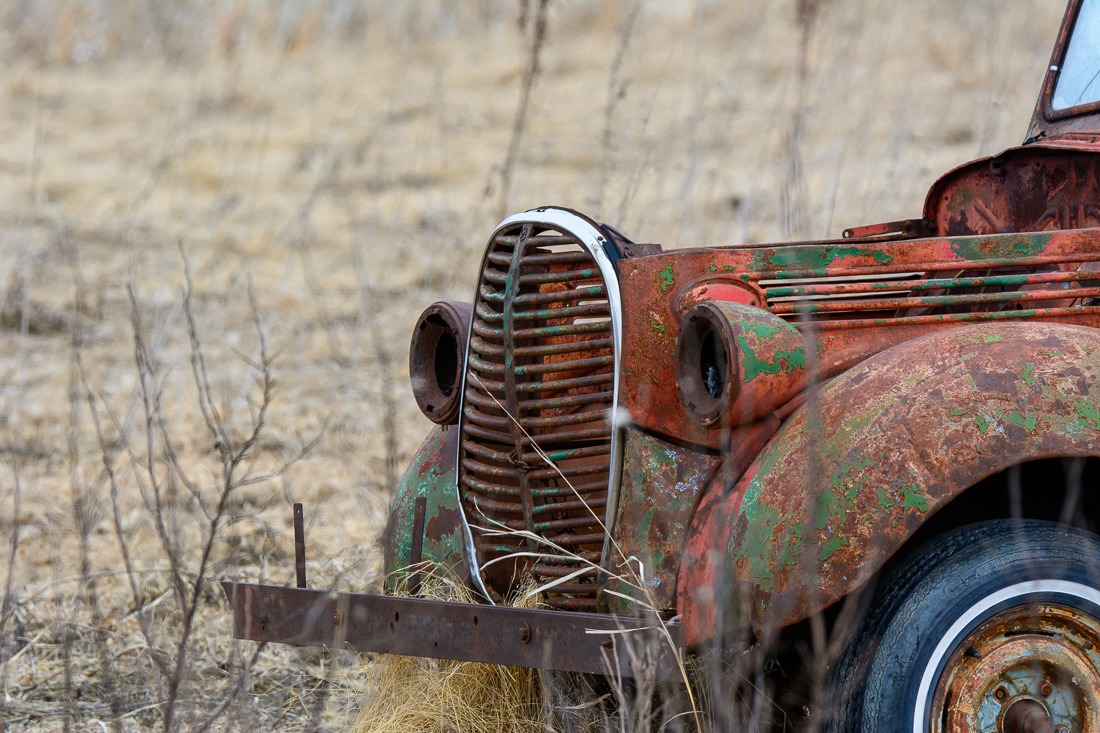 Laid to rust in a field

Other trucks are simply parked on the farm and forgotten. Some part may have been resold to others that had a need for it, but the remains of the car will stay where they are. Sometimes trees will even grow through the chassis since nobody will have cut grass, weeds or other wild growth underneath it. 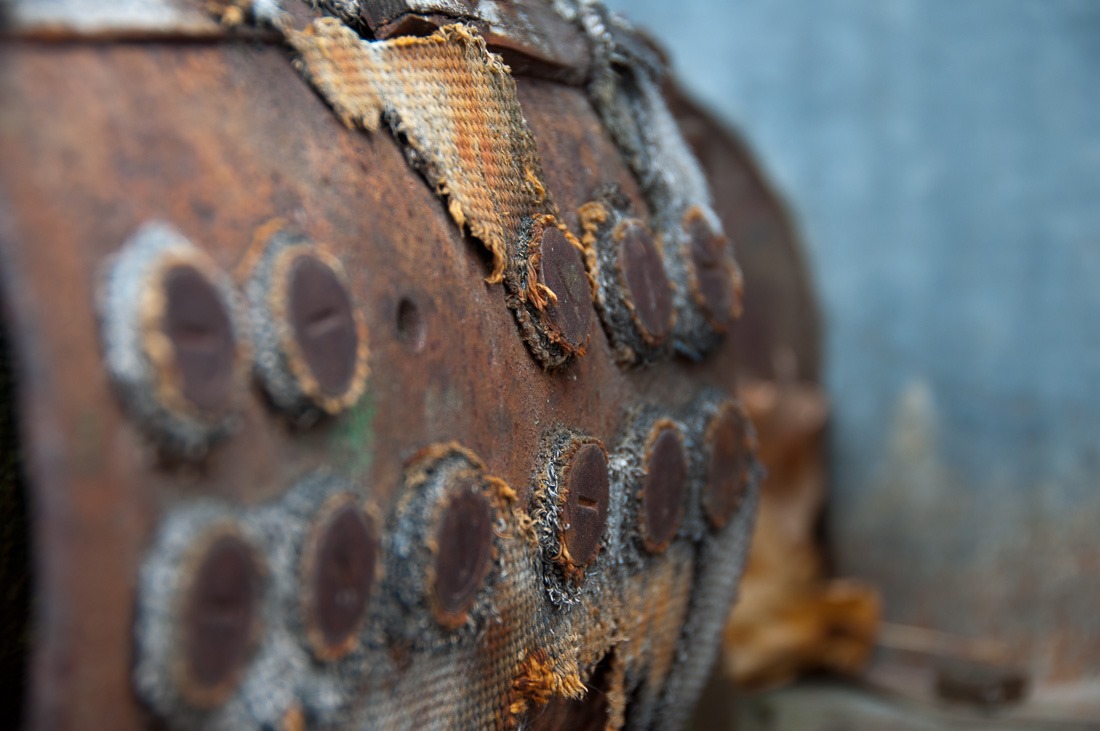 But not all rust was rolling material. Some of it was pure farming gear. Like the above part of a thresher. The tension on this piece has proven to be too much over the years and the belt has gone. Remaining is a rusty piece with a now mysterious function from the past. 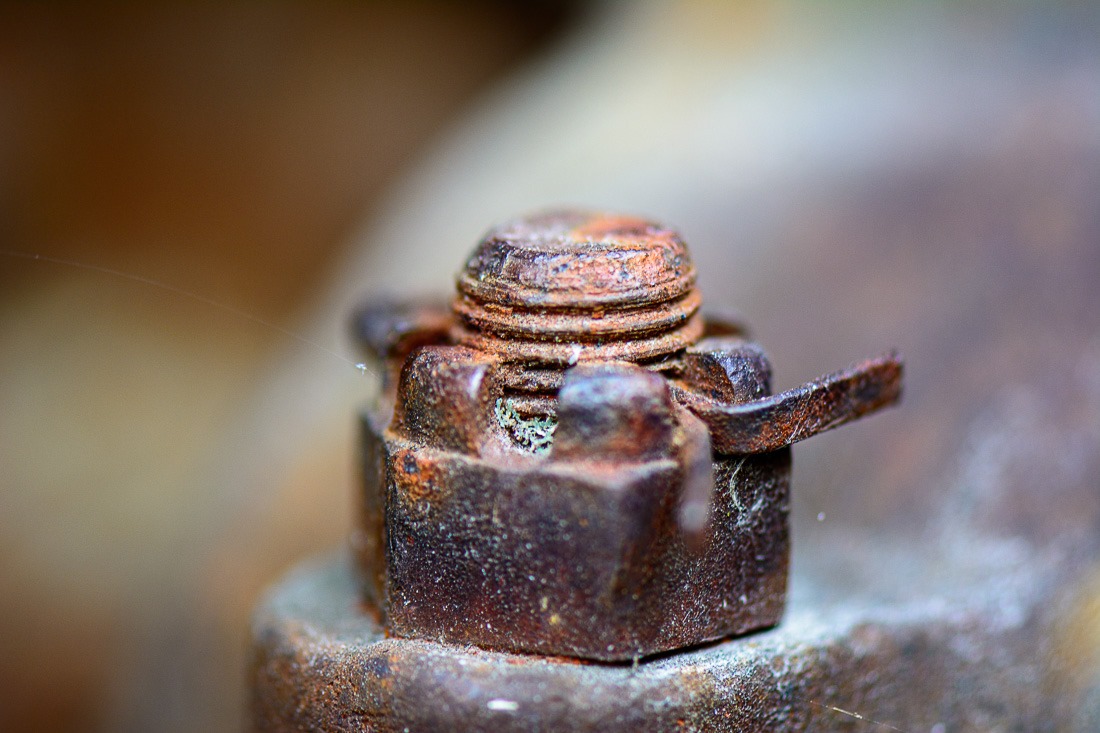 Details from rusty machines are sometimes more interesting to hoot than the whole machines. A simple locking nut like this, for example. It could have been used anywhere, but it’s part of the same thresher as the previous shot. Threshers were used to separate the useful harvest (beans, wheat etc) from the chaff. They were widely used and can still be seen in many places, in many stages of decay. The one here is located conveniently in Birds Hill Park, on the Kudlovich homestead. Or at least on what is left of it. 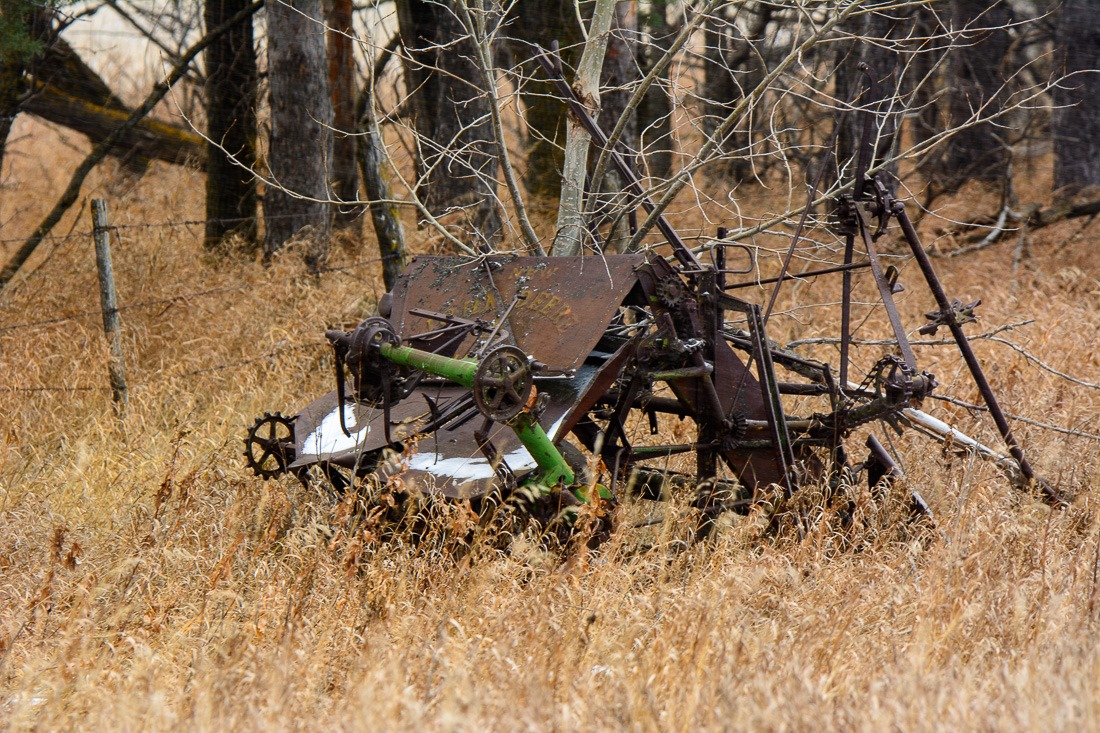 Then there are rusty treasures for which I have no words. Apart from the fact that this came from the factory of John Deere, I have no clue as to what it once was. I can only ascertain that it is now rust and will remain so for the foreseeable future. 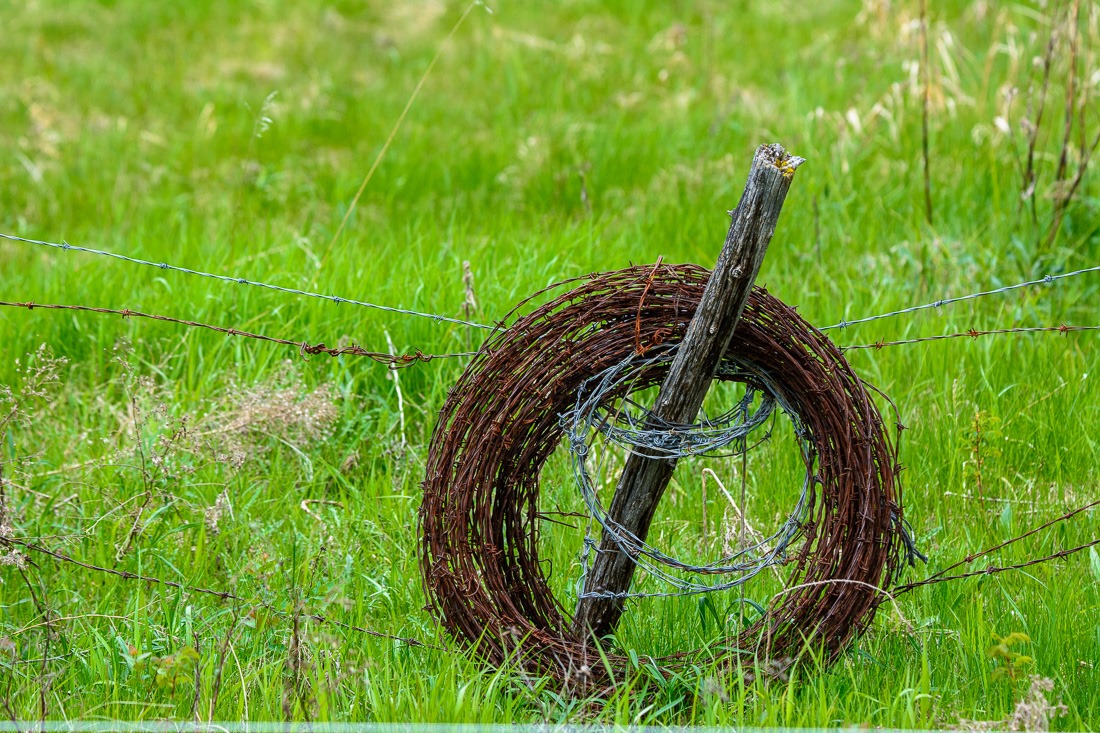 Other rusty items to be found are barbed wire, used or not used. In the above picture, I  guess that using new barbed wire was easier than to untangle the abandoned rusty stuff

. The mix of old and new caught my eye in this shot. 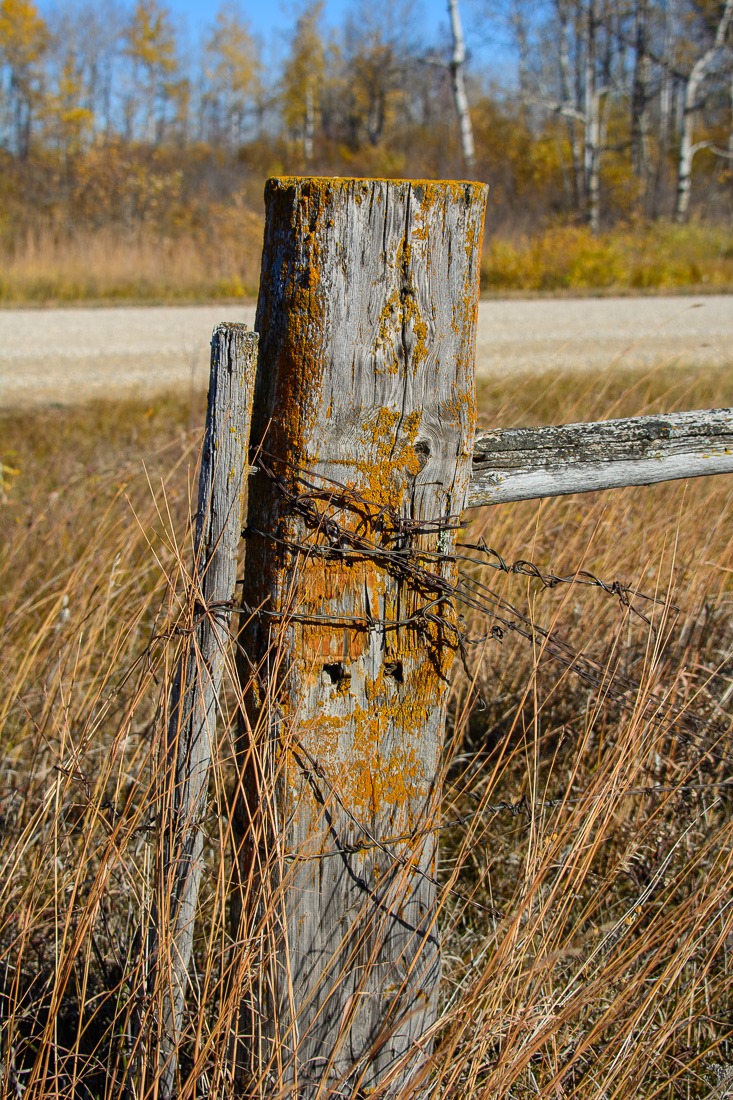 Barbed wire is everywhere on the prairies, even in one of my favourite comic strips from my childhood. Once probably reviled, for it cut down on the freedoms of the cattle ranchers, today it is more used to keep strangers out and cattle in place. In the above picture, I think that a train even left behind a tie or two to serve as sturdy fenceposts. 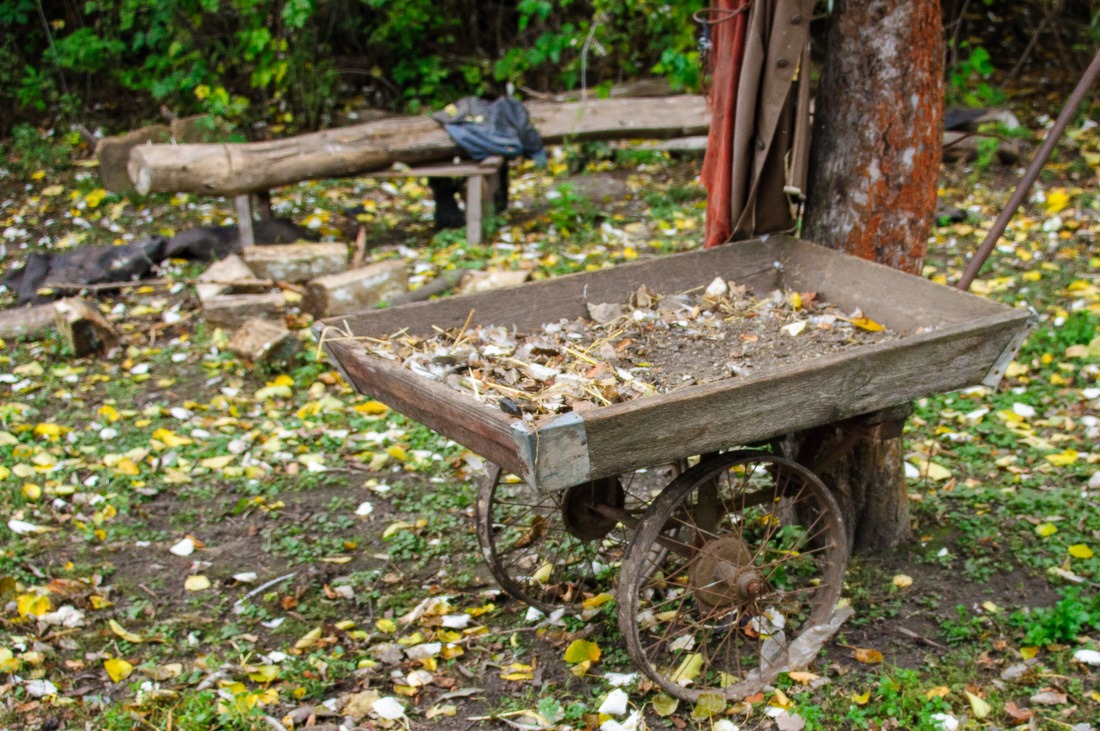 And then there is rust that is still in use today. This little cart in a Ukrainian village I have blogged about many times, Dubinka. Repurposed wheels, probably from a pram or something and we have a new, usable farm implement. Good for many years of sue

Since iron is one of the most prevalent metals on earth, rust is also everywhere in many forms. To find it, all you have to do is look around you. Forget about your car, rust is even in the ground. When you see that reddish colour in sand, it’s probably rust, iron in its oxidised form.

Junk for some, treasure for others. As I often say, to each his/her own. I just like to photograph it.