Nobody is supposed to ignore the law

This is valid for all countries in the world. In French they say “Nul n’est censé ignorer la loi”. Fine, but sometimes it is difficult to understand, for lawyers, bookkeepers and even judges. A better way of stating this title would be “Nobody is supposed to be ignorant about the law”, meaning you must know about it. Ignorance is not an excuse. 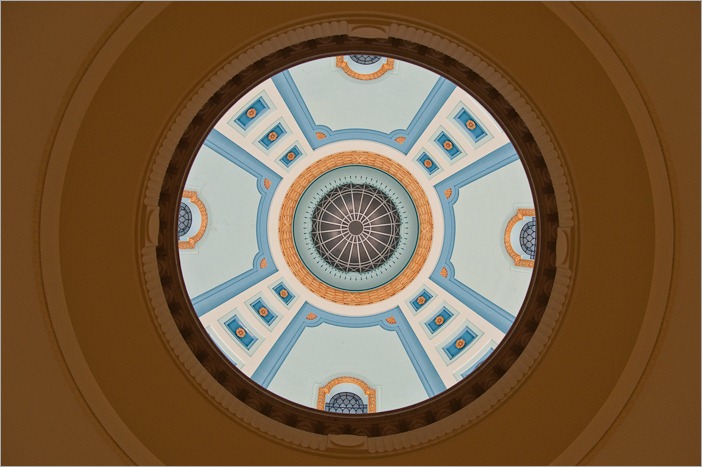 View from the rotunda, straight up

Ok, that’s heavy stuff, I can understand that this statement could fire up many a discussion. No problem there, that’s good for the long and cold winter evenings :-)

The subject on this blog is more about appearances. 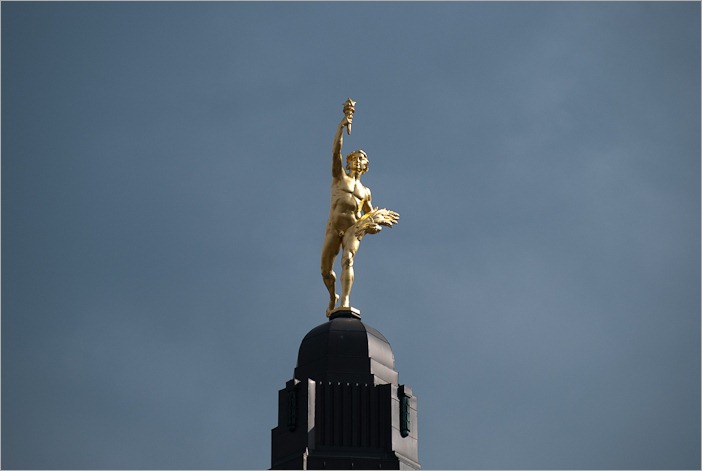 The law in Manitoba is made under the (naked) personage we all call “The Golden Boy”. For those already in the loop this article is about the Legislature in Winnipeg, not about some lawsuit from the state against someone or vice versa. More on the Golden boy later.

Last weekend, many of the old buildings in Winnipeg held Open Doors. A wonderful occasion to go into buildings where the public normally has no access. The buildings were banks, hydro, the Legislature and many others. Only two days to inspect all these buildings? Yes, too little to visit them all. I guess we will have another chance next year. There were some 54 buildings open this weekend. 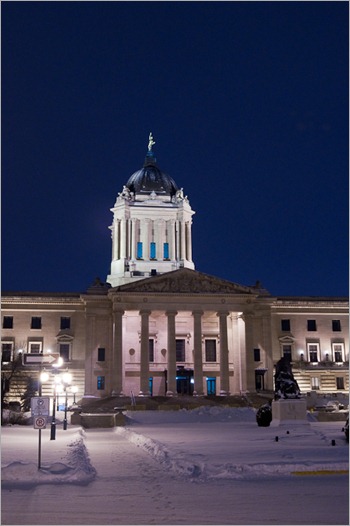 So we chose the Legislature.

Manitoba’s Legislative Building is the third in function. The first one burned down, the second was demolished when the third was ready for use. Frank Worthington of Liverpool, England was the one who designed the plans of the current building. Excavation began in 1913. When World War I broke out in 1914, only the foundations were ready. Then started a period without labourers and without material. It was already long after WWI, in 1919 that the building was ready for partial occupation. 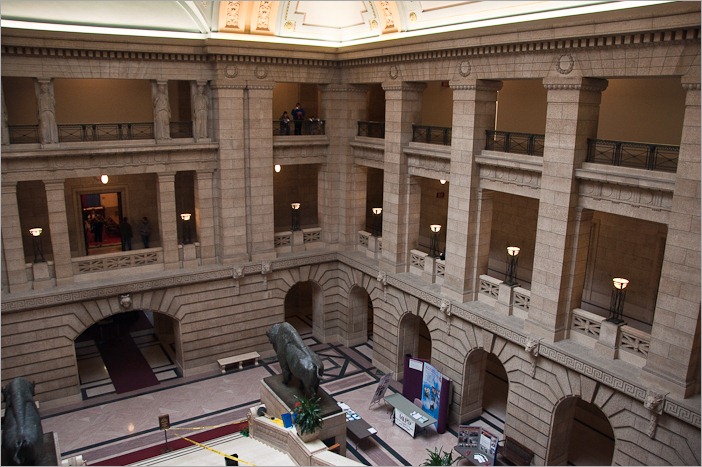 Main hall of the Legislature

Most people in Winnipeg know the outside of the building, but the inside is rather surprising. In Holland for example, most of the government buildings are modern and focused on functionality and rationality. Here, we still have the original design of the building, and it is just as functional.

The outside as well as the inside is made of Tyndall stone, quarried nearby Garson, a town about 50km away from Winnipeg. Tyndall stone is a mottled stone, full of fossils of animals and plants. 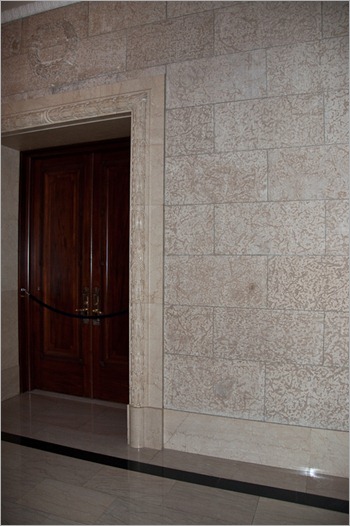 The floors are clean. Clean to a point where you start wondering if there is ever anyone walking on them. Anyway, with a little less lighting than expected (This was the first day I ever used my new Speed light SB-600) you can get an interesting effect. 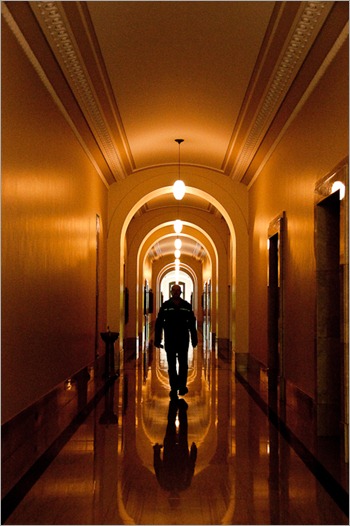 The building is full of wonderful places where the public normally does not have access. Like the Legislative Assembly Chamber, where all the laws are presented and voted for. 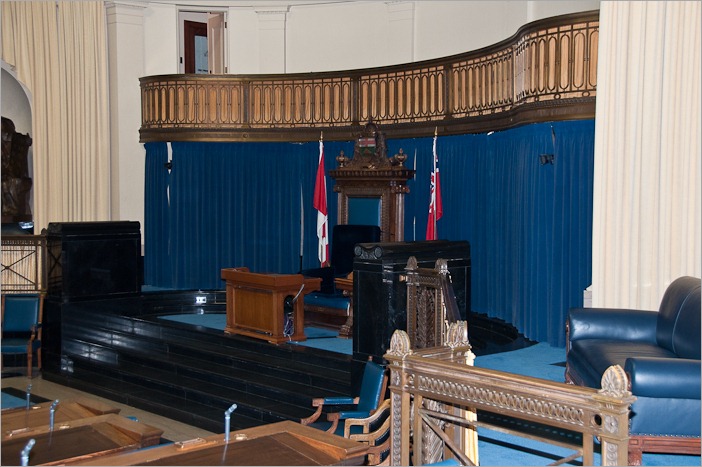 Normally you would expect a green or a red decoration, but here it’s blue. Nice touch. Details are all over the place, you just have to look. The door handles and locks are nicely decorated in the Manitoban style, with bison. 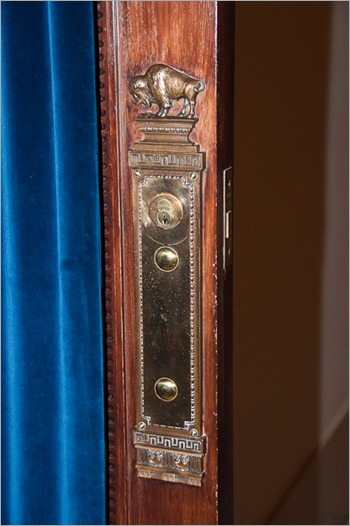 Bison is the Manitoba emblem and can be found everywhere. But the most prominent ones are in the entry hall where stand two of these animals. Each weighs about 5000 pounds and is made of bronze. The story goes that when they were to be placed here, the marble floor was already laid. How to move 5000 pounds of bronze over that marble without even thinking of scratching it? 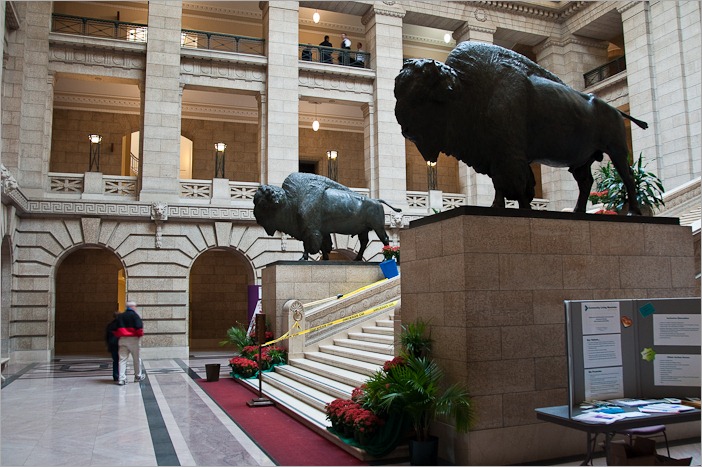 It is said that the builders inundated the floors with water and waited for the water to freeze. They then put the statues on ice blocks and moved them around freely. True, I don’t know. But 5000 pounds is a lot of weight to lift over a floor. And that floor is not scratched.

Behind the Legislative Assembly Chamber is a gallery with the portraits of all the past speakers of the assembly. No pictures I would present here; I still need to get that speed light to work the way I want it…

Also interesting are the different memorial plaques of ancient warriors and memories. 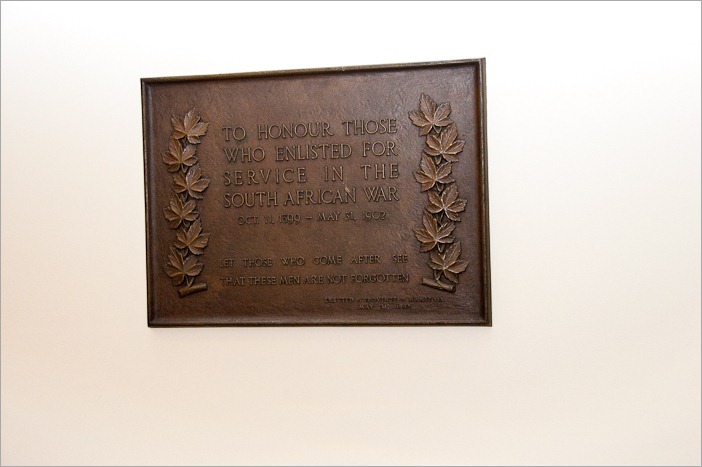 To those who went to The boerenoorlog

Here, a plaque for those who enlisted in the Boeren Oorlog (in South African : Vryheidsoorloeë or Freedom Wars) in South Africa from 1899 to 1902. Bloody wars between England and the Orange Free State and the Transvaal Republic.

Whenever you get a chance to go into the Legislature, one of the things you will remember easily are the long corridors of shiny floors, arches and Tyndall stone. 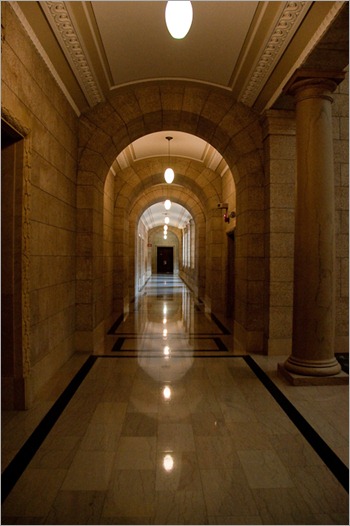 Corridors like they made them in Europe about 1000 years ago.

Old fashioned? Perhaps, but functional and beautiful. So what about the laws created in this building? I guess they have to be in the same style. A bit old-fashioned, stylish so you can bend them a bit to good use. And made to last.