Now is the time to post the colourful pictures of fall. The reds, yellows and browns are everywhere. At least in this part of the country. Before we know it, that colour will give way to the greys and blacks before snow comes and covers that all up. 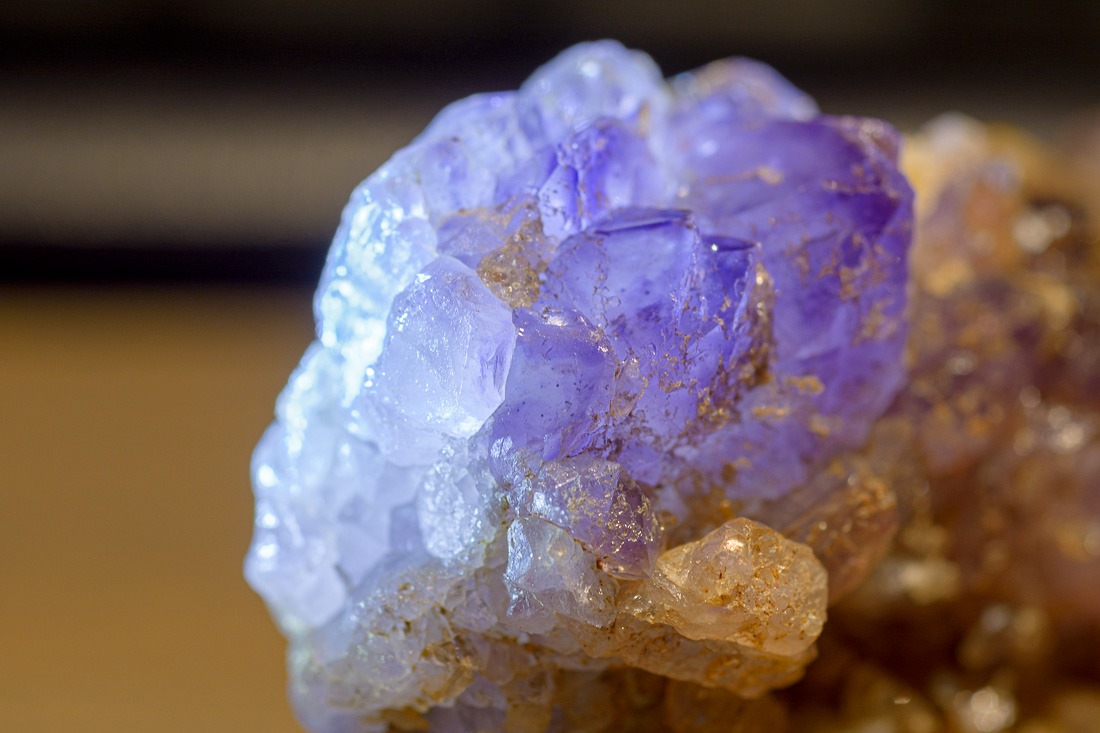 By then it will be time for me to post the warmth of the colours of fall. Right now, everyone is depleting their stock of colourful pictures to post in record time. So I will have something to look forward to. For now, it’s time for the wonderful world of closeup and micro.

Of course, real micro photography requires specialised equipment, something I do not possess. What I do possess is a macro lens, dubbed Micro by Nikon. It has very good results with close-ups. The term “macro” implies that the subject can be reproduced or projected onto the camera’s sensor on a 1:1 basis. That precludes a macro shot of anything bigger than 24x36mm or in my case 16x24mm. It wouldn’t fit on the sensor on a 1:1 projection. 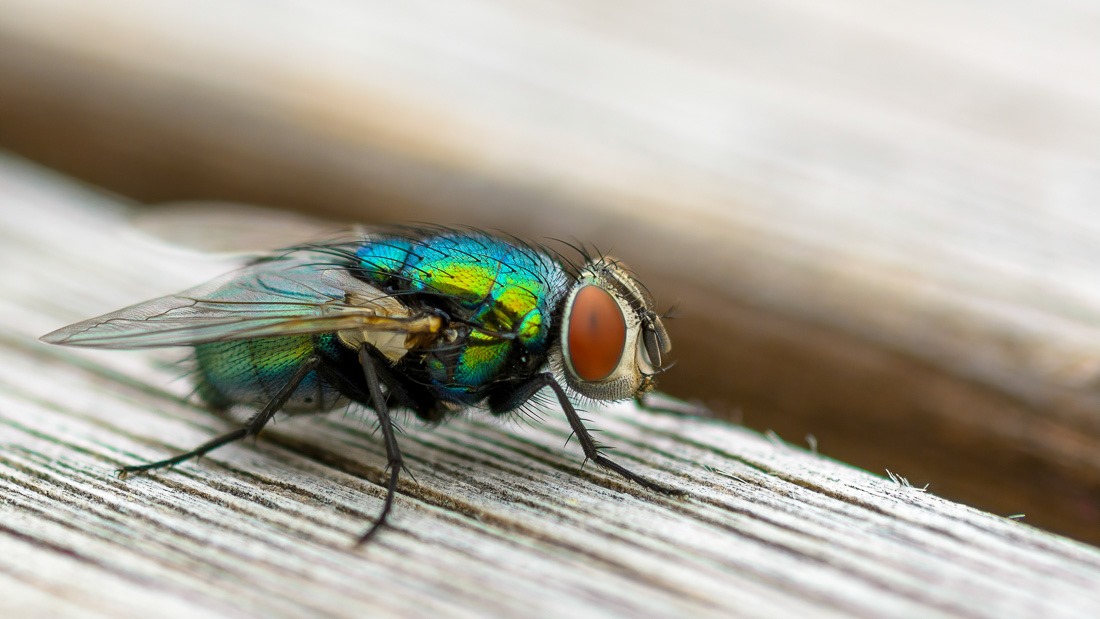 So some of the shots here are true macro shots, others are closeups that could be possible with other lenses as well. However, having a specific macro lens give more clarity in the subject. Something that you cannot obtain with other lenses. The above Green Bottle Fly would have lost the hairy details with any other lens than a macro lens. 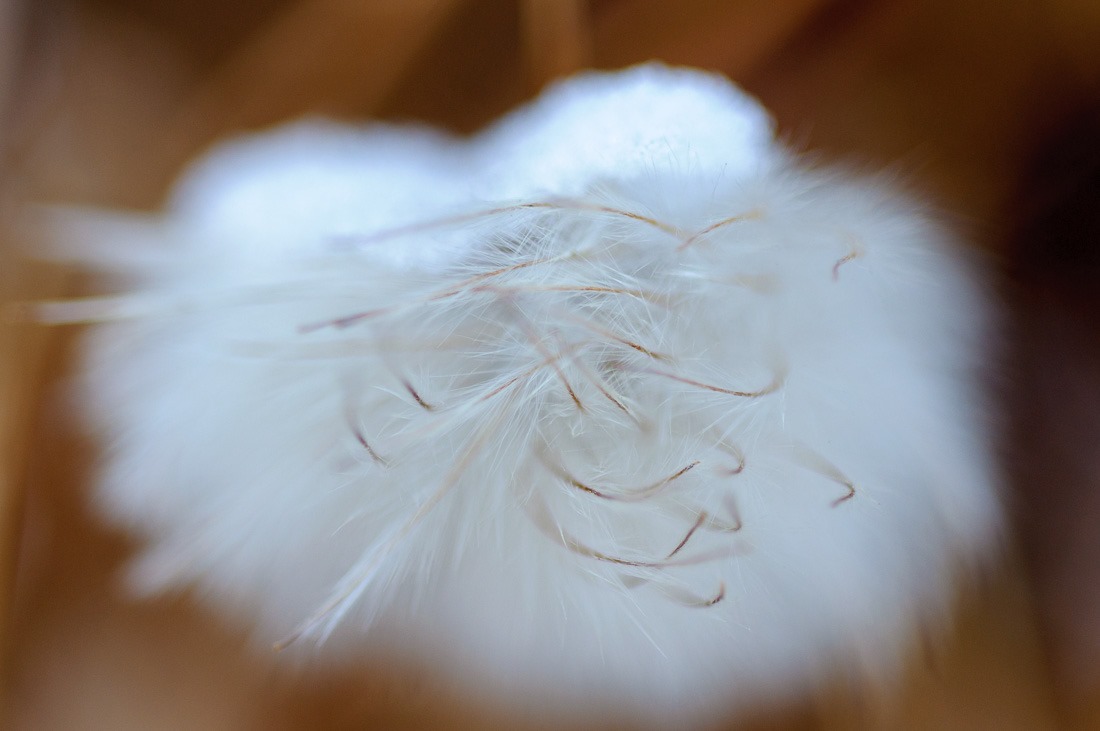 Fall is full of surprises for one who has never looked very closely at things. I wouldn’t even say “nature” because too many people never look closely at seed pods or insects. “Too scary!” is what I hear often. In fact, that is a little bit too often. While insects can have a nasty bite, you are most likely not on their menu after all. 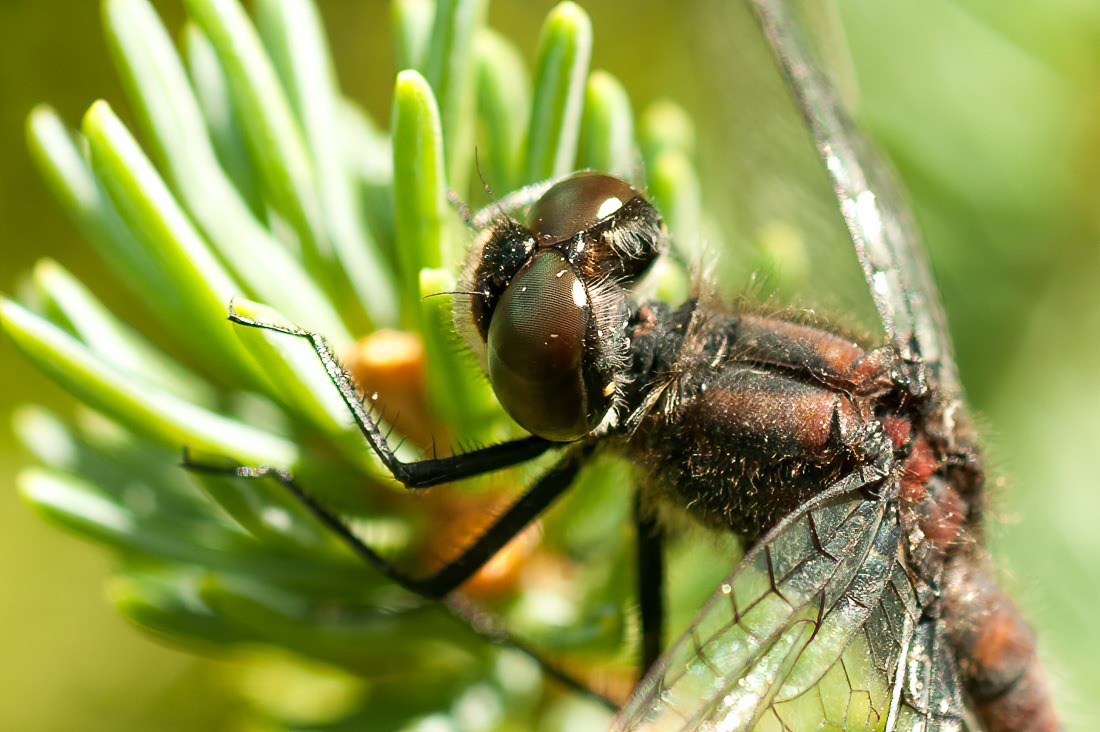 This dragonfly looks fierce, but its menu consists of mosquitoes and other insects. While part of the order of Odonata (from Greek: those who have jaws or teeth), it will never even try to take a bite out of you. The macro lens nicely shows the facets of the eye, something obtained only with great difficulty (and a lot of software manipulation) with other lenses. 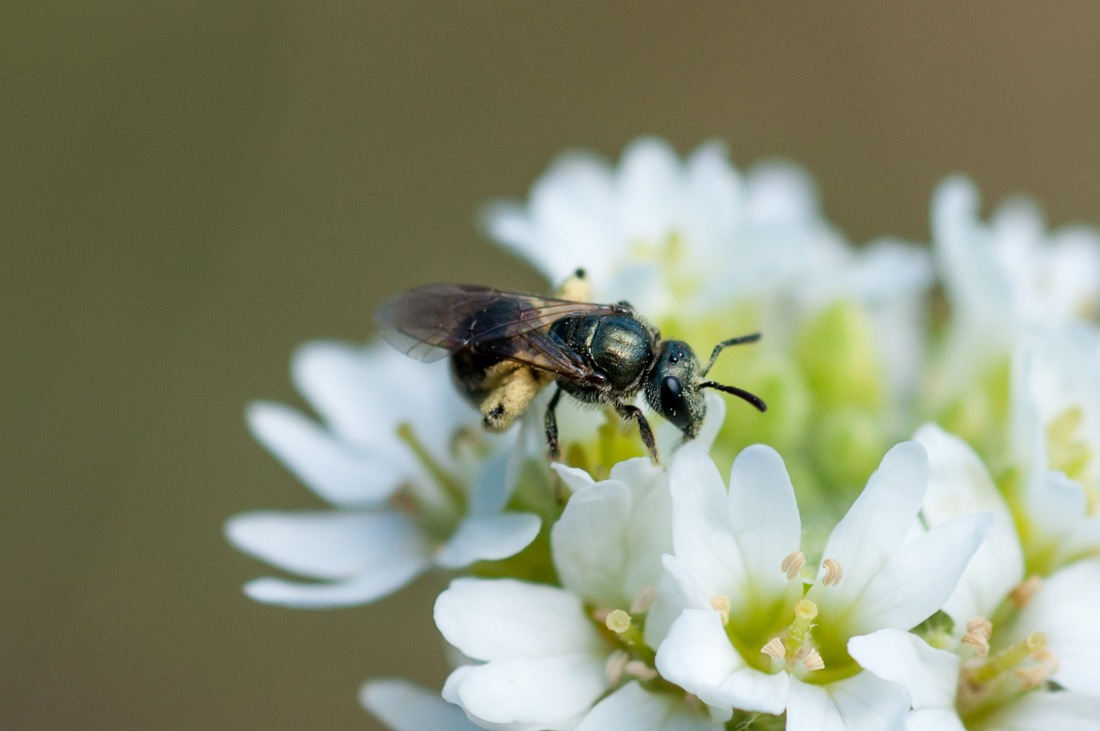 Other insects may defend themselves with a bite or a sting. Some may die from that sting themselves as it will rip out a part of their bodies. Yet I have never had a “free” sting or bite from an insect. It was always provoked in some way. Sometimes not even by myself, but by a previous person swatting away at it and *** it off to the point of attacking anything that comes next. 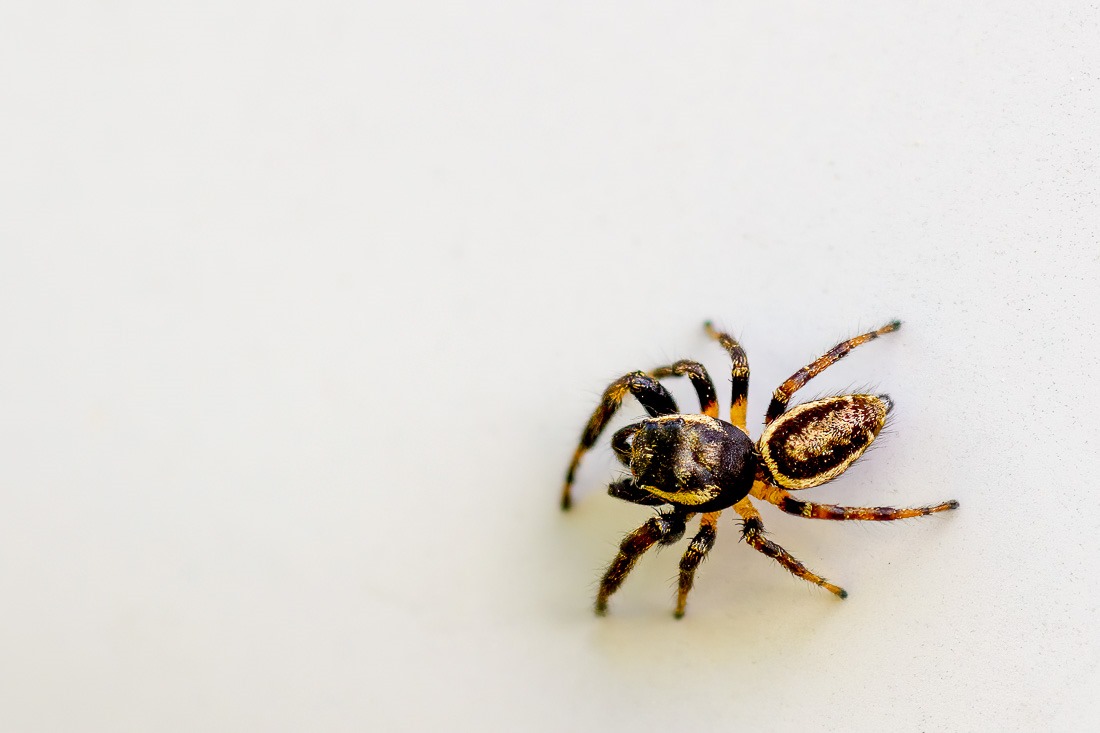 The ones that really have a bad reputation are also the cutest ones (sometimes). Spiders don’t have a human on their menu, yet invariably invoke a scared reaction when seen from up close. This little one may have you perplexed a bit, but it is looking to the left in this picture

. Again, a macro lens brings out the details like no other lens can. 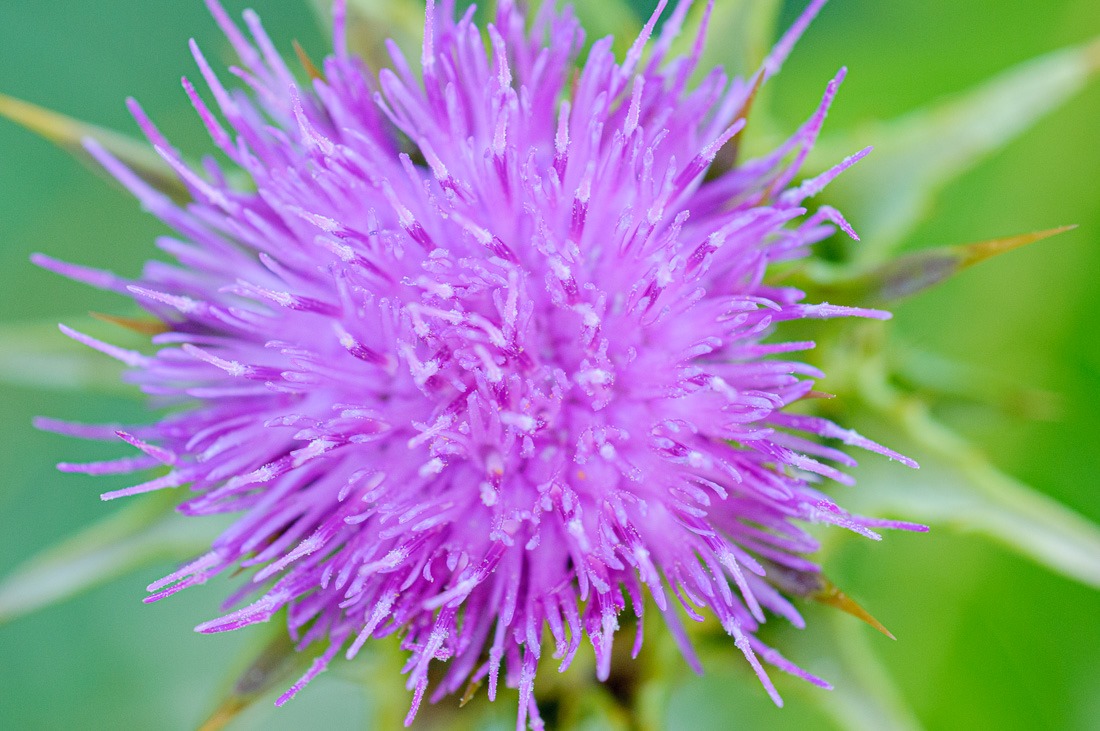 Then there are subjects a little bigger than my sensor. I’m happy for that, I’d never find them otherwise… This was growing in the English Gardens in Winnipeg. Not sure what it is, but up close it looks pretty. At first sight it would be a thistle, but those don’t get a chance with the gardeners in the Assiniboine Park. So until I find it again and can ask someone what this is, it remains just “pretty flower” 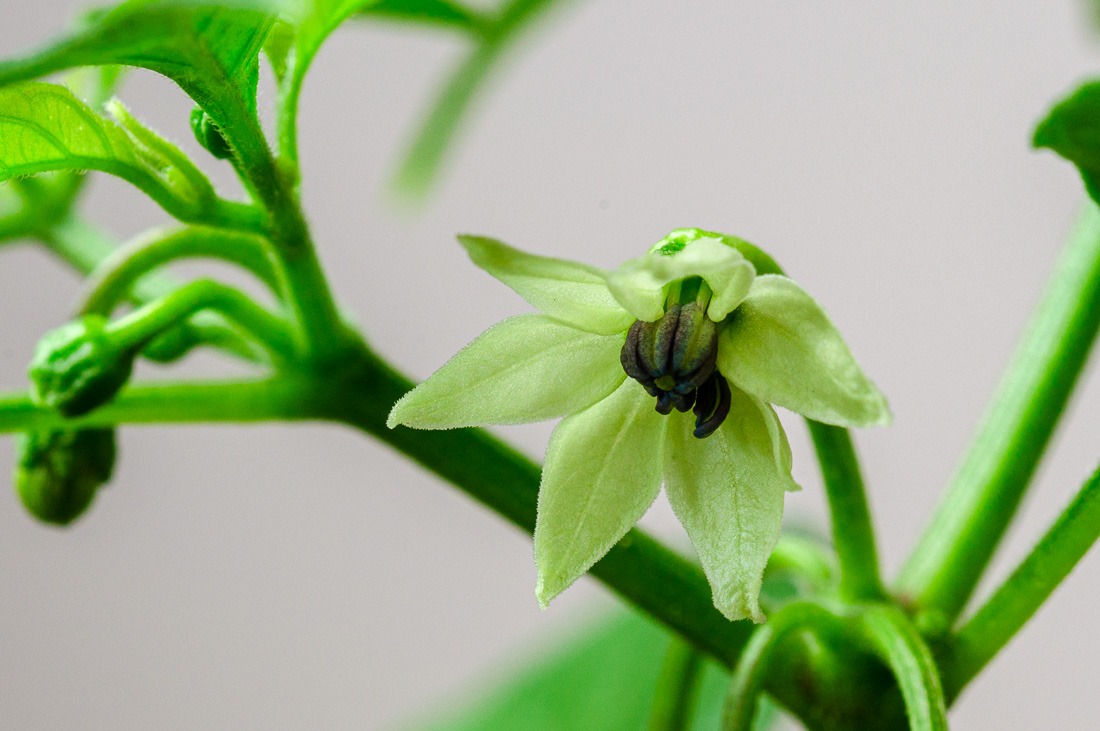 Some flowers don’t get the moniker of “pretty” and people walk by them without giving them a second glance. This Habanero flower is such a flower. Green on green, tiny and not very inviting. I guess insects will find it appealing anyway, pollination is taking place after all. This one made for a spicy meal a few months later. 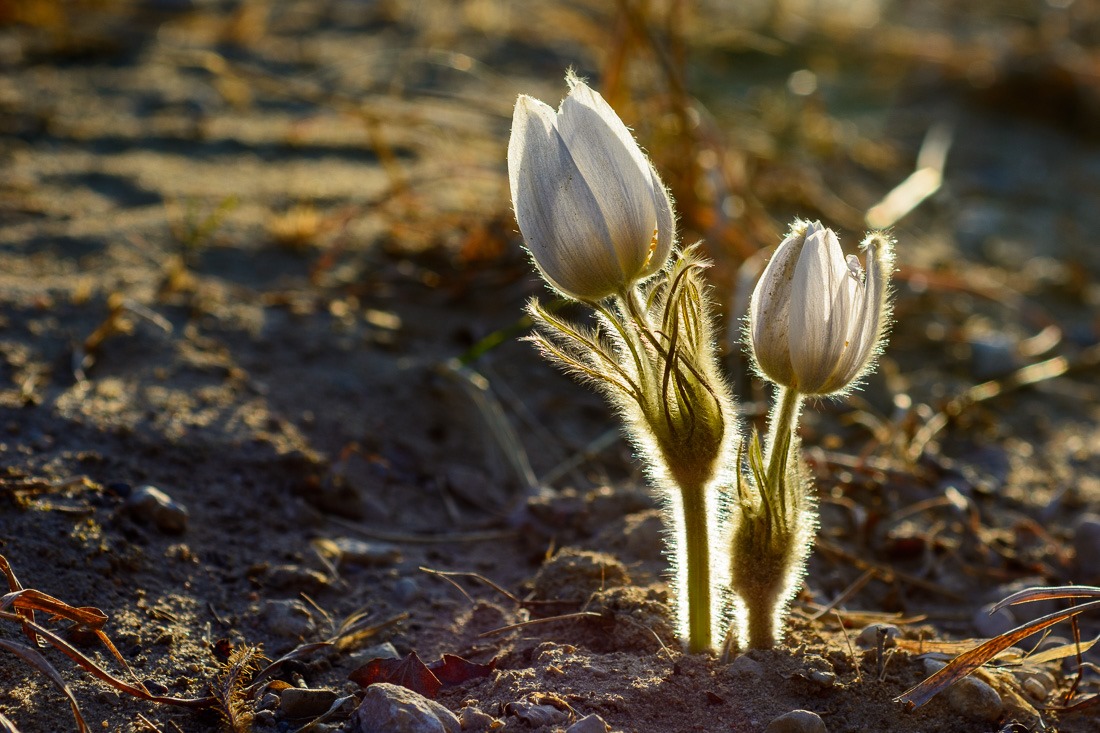 For those who love small flowers, the above Prairie Crocus is often a favourite. It’s not a Fall flower, it’s the first flower to show itself after the long and cold prairie winters. Growing on sandy soil, it pops up soon after the snow is gone and the ground is dry (or dry-ish). It’s not really a crocus, as it procreates through seeds and not through bulbs, like the European Crocus. In fact, they are not even family. But who cares when the flower is pretty and promises better times to come?

And that ends this journey through a short, 60mm macro lens. All these pictures have been shot within a few centimeters of the subjects with a Nikkor 60mm lens.

As a little advertisement for my blog, try to subscribe to it in the About>Subscribe menu. I do not send unsollicited email. You will only be notified of new posts on this blog. Thanks in advance!