Gone in the blink of an eye

Summer, that is. And like every year, we think we hardly did anything during this precious summer time. “Too short to mention!” is what I often hear from people. Yet when I make a list of things I did do during summer time, the balance is somewhat different. 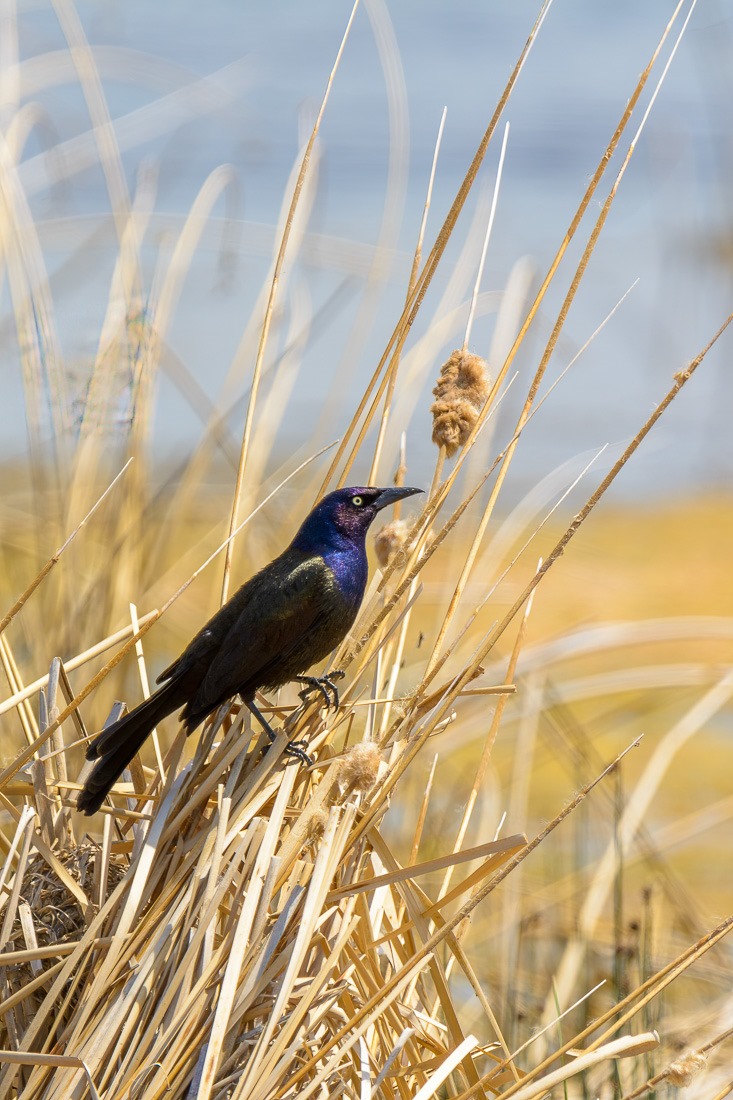 The start of the summer is usually around or after May Long Weekend, the last weekend in May. Grass and reeds are still dead, but birds are already there for the new shoots.

It doesn’t mean that weather is going to be warm and stable by then. Spring, or Late Winter as some might call it, is still very much present and tries to remain in power. Leaving the atmosphere quite disturbed. 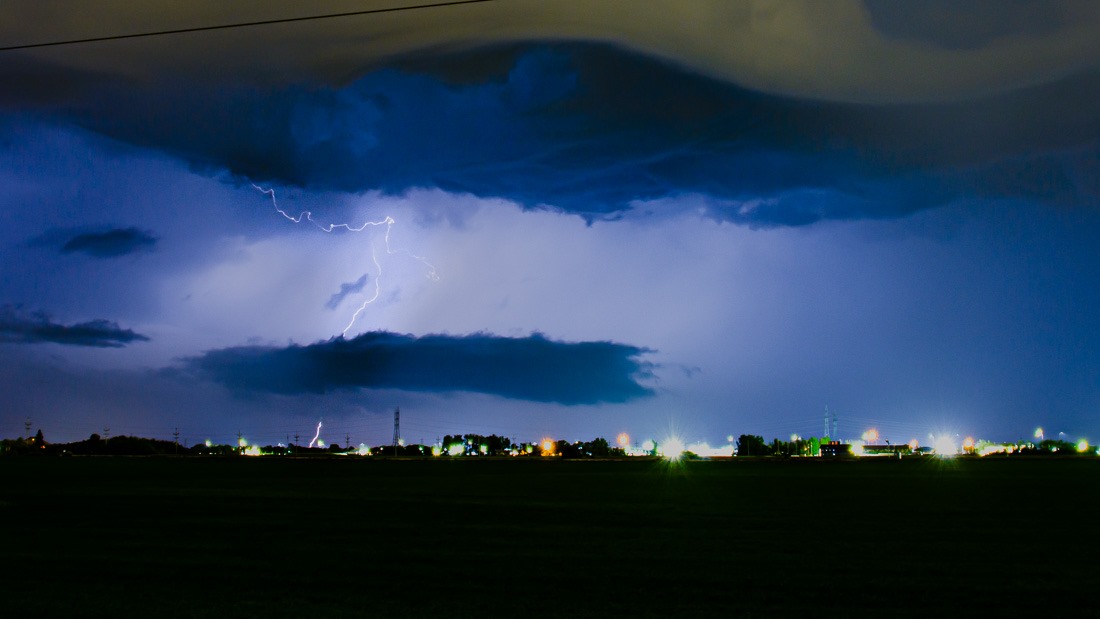 Thunderstorms are then possible. “When thunder roars, stay indoors!” is the saying, but as soon as I see lightning, I am outside trying to capture it. With more or less success. Sometimes, there is plenty of lightning, yet none to be seen of photographed. 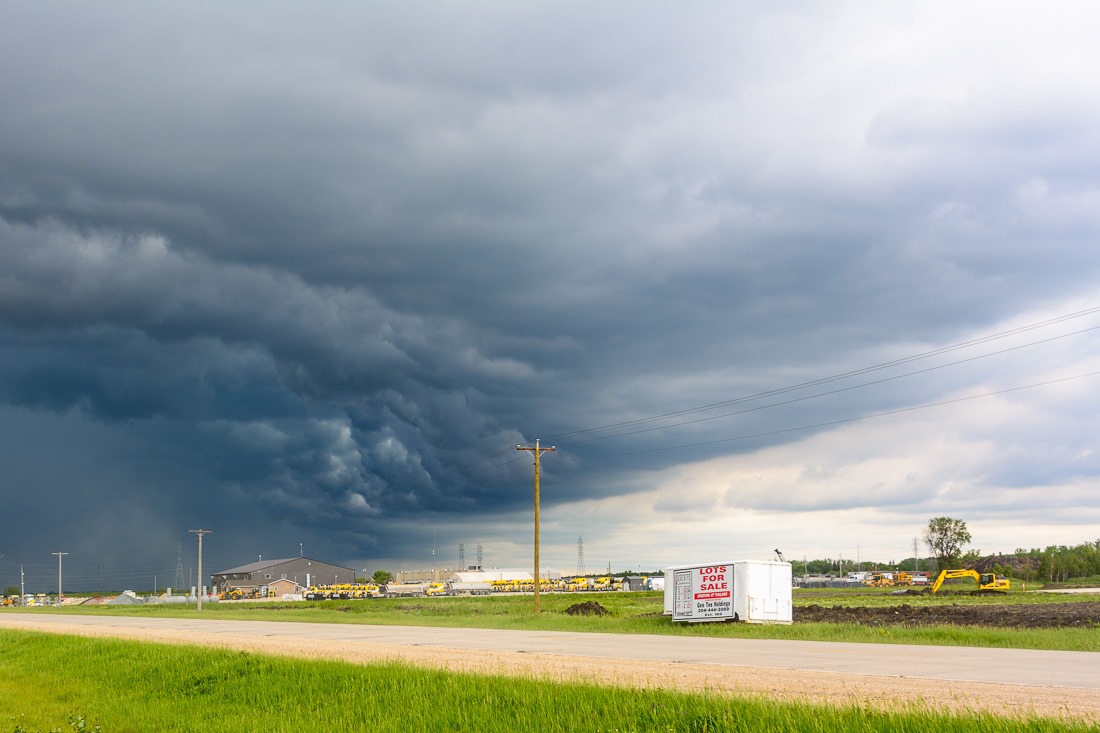 This year, weird as the year is, has been a bit atypical with heavy storms as well. Usually they occur from mid- to end-summer, this year, I caught them in June. This one was rumoured to have tornadic activity, but in the end it was just another storm. 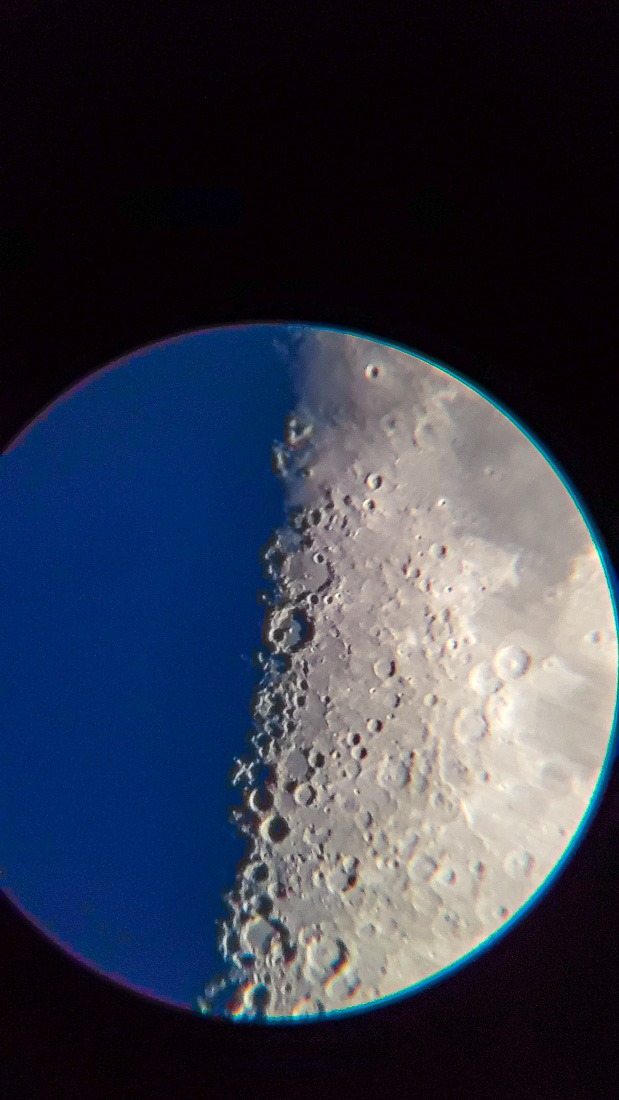 Then the temperatures finally warmed up for good, and the nights were great for checking up on the moon with a telescope. So how do you take a moon shot without special equipment? Hold your cellphone to the eyepiece and try to make the best of it. Obviously this is not really high quality, but for a cellphone on a telescope, it’s not that bad. All in all that was a nice evening. 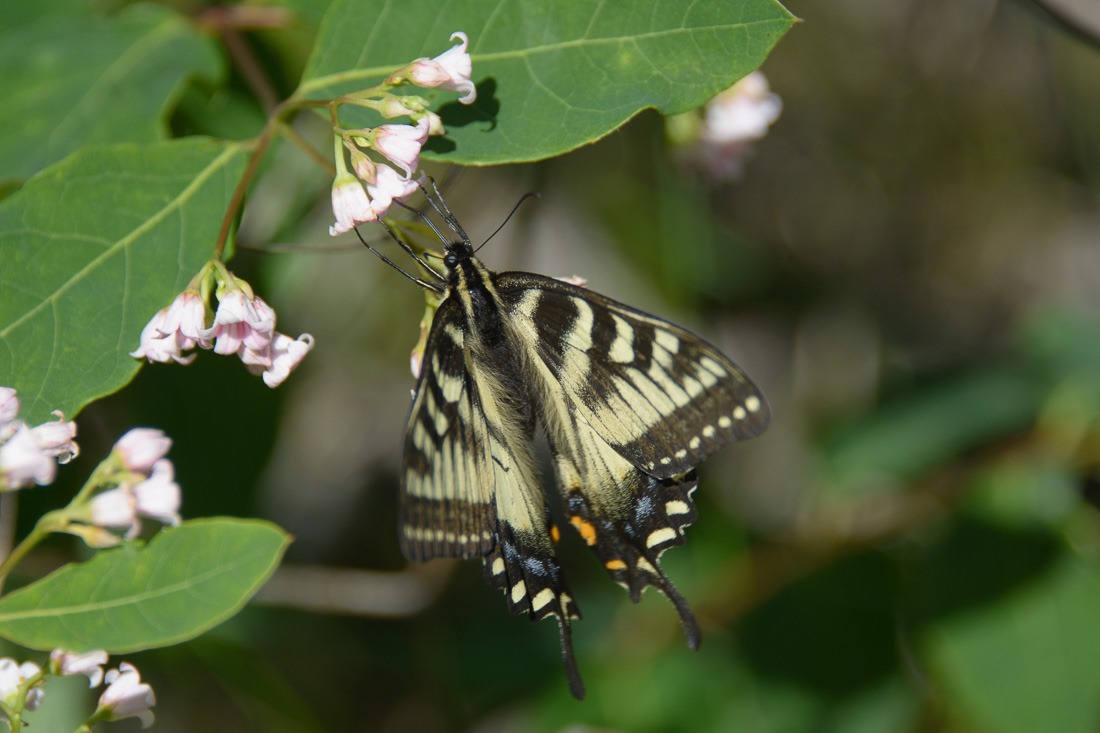 By the end of June, the more interesting butterflies arrived. Some flying, some were born here. This Canadian Tiger Swallowtail decided not to show me its wings as I would have liked. It’s amazing to know that these insects have excellent eyesight. 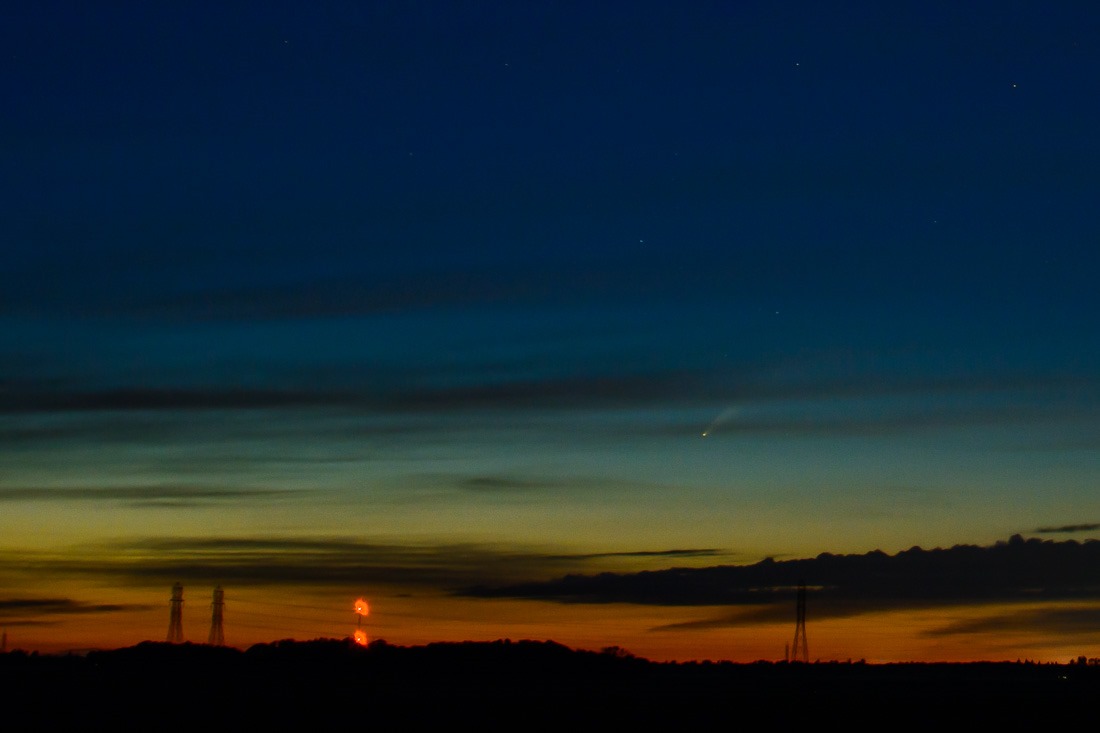 Then came along July. July pictures on the internet were dominated by Comet Neowise (C/2020 F3). Shots with huge dust tails and colours were everywhere. Yet when I went out to find it on a dark night, I couldn’t see it anywhere. So I simply shot the night sky in the general direction of the comet and hoped for the best. Once I got home, I transferred the pictures to my computer and found out that I had been shooting the comet all night long…

But July has more to offer than invisible comets. Together with canola fields, storms are a favourite of mine. When I can combine both, I always feel a lot better. The above storm was to bring quite a disturbance over Winnipeg a few hours later. 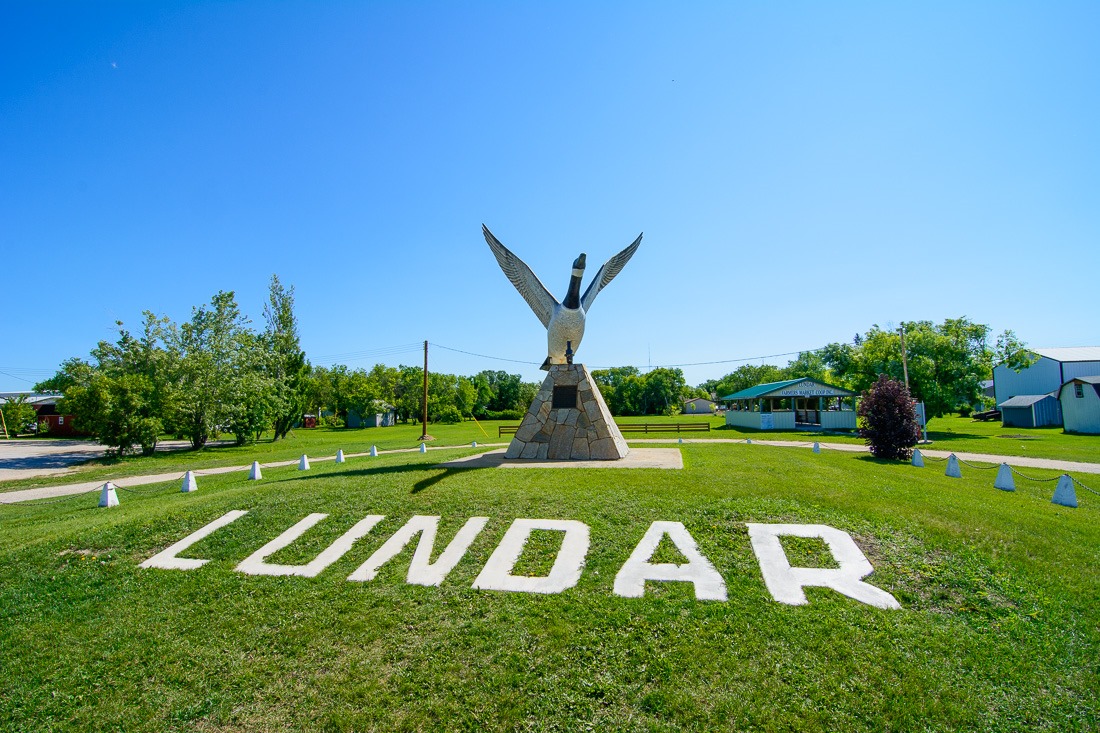 Then it was time for some well-deserved time off. Time to go camping. On the way to our destination, we came across the goose of Lundar and the Grouse of Ashern. At least the goose picture does not need to be geotagged to know where it was taken… 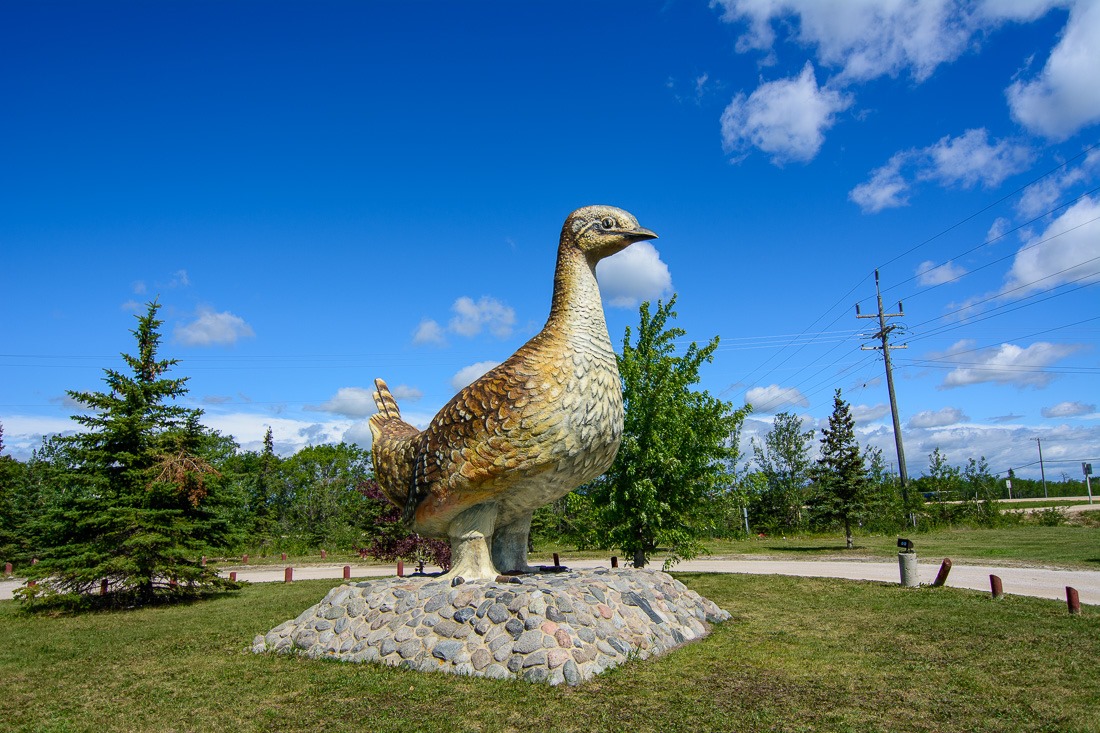 Ashern is the self-proclaimed Grouse capital of Manitoba, yet the only one we saw was this fiberglass giant

. I guess we’d have to go into the bushes a bit more to find the real deal. The Lunda pic and this grouse pic were taken the same day, just a few minutes apart. 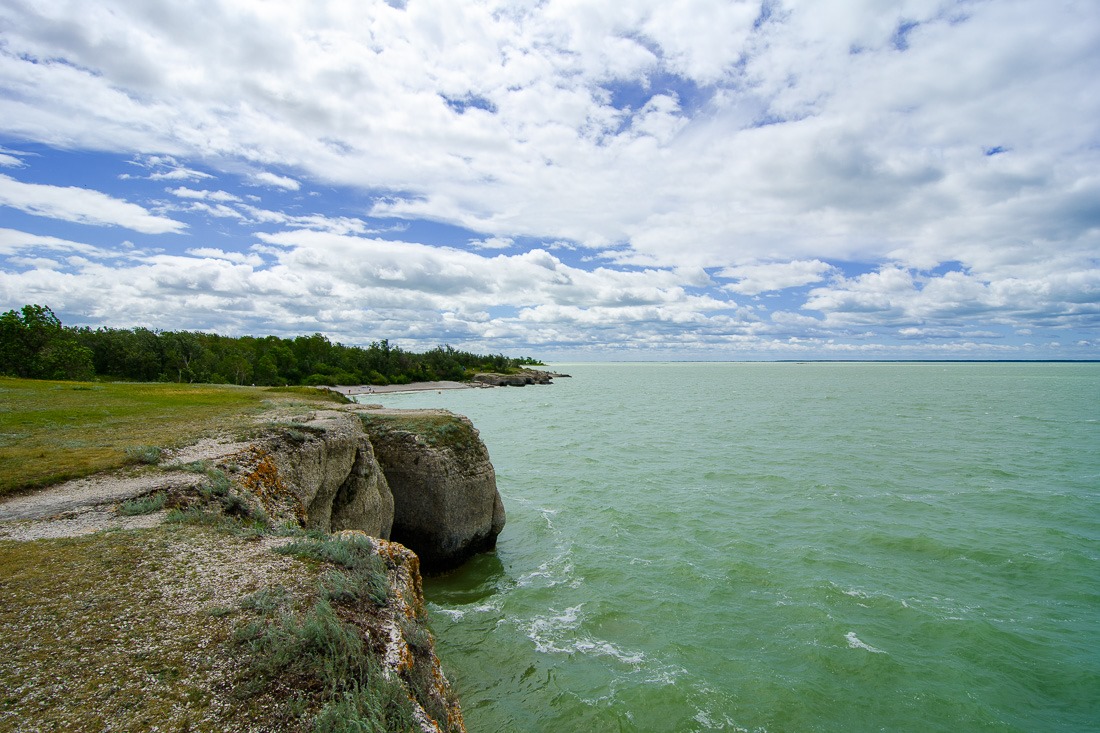 On the rocks of Steep Rock

By the time we got to our destination in Steep Rock, the clouds had rolled in a lot. The wind was also a lot stronger than in the city. The normally azure blue lake water had turned green instead. Taking pictures from the edge of the rocks of Steep Rock had become a bit risky. As it turned out, with this pandemic going on, everyone wanted to stay “home” or could not travel properly due to restrictions. I guess at least half of Winnipeg ended up in the sleepy town of Steep Rock at one time or another during this summer. 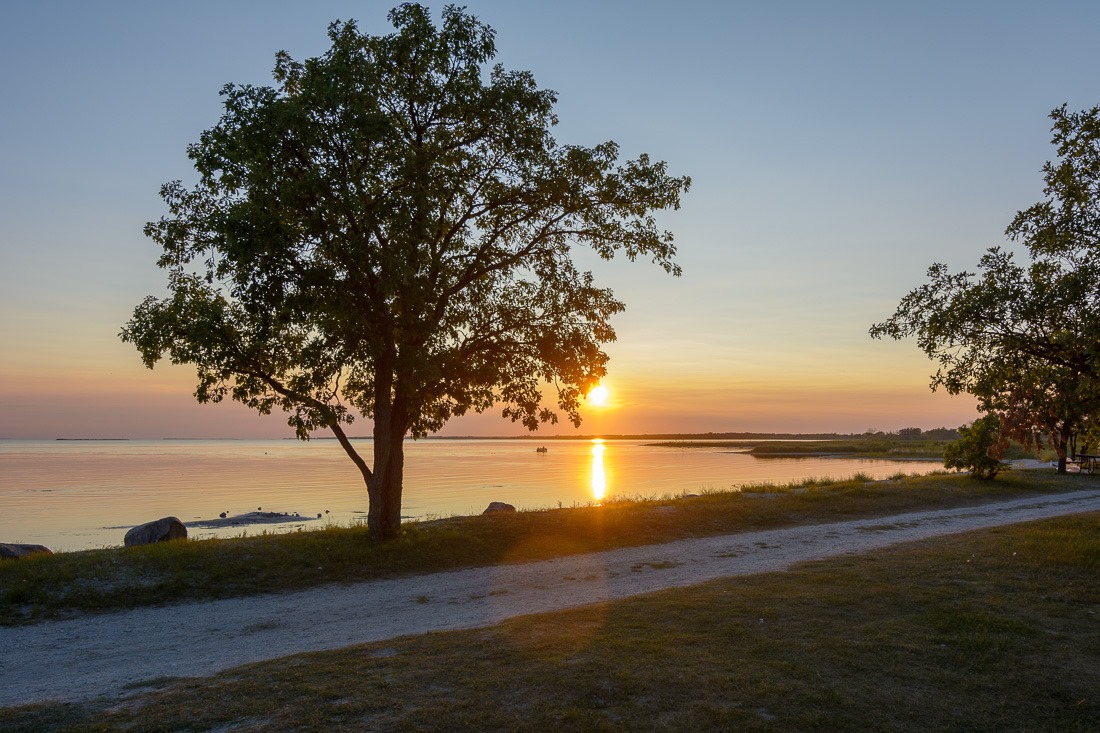 We, on the other hand, decided to go camping away from the crowds and descended on to Watchorn Provincial Park. The word “Park” is kind of optimistic here, but the campground was real. That the two would mean one and the same thing only became clear a little later. The sunset seemed nice, so I tried to get some interest in my shots. 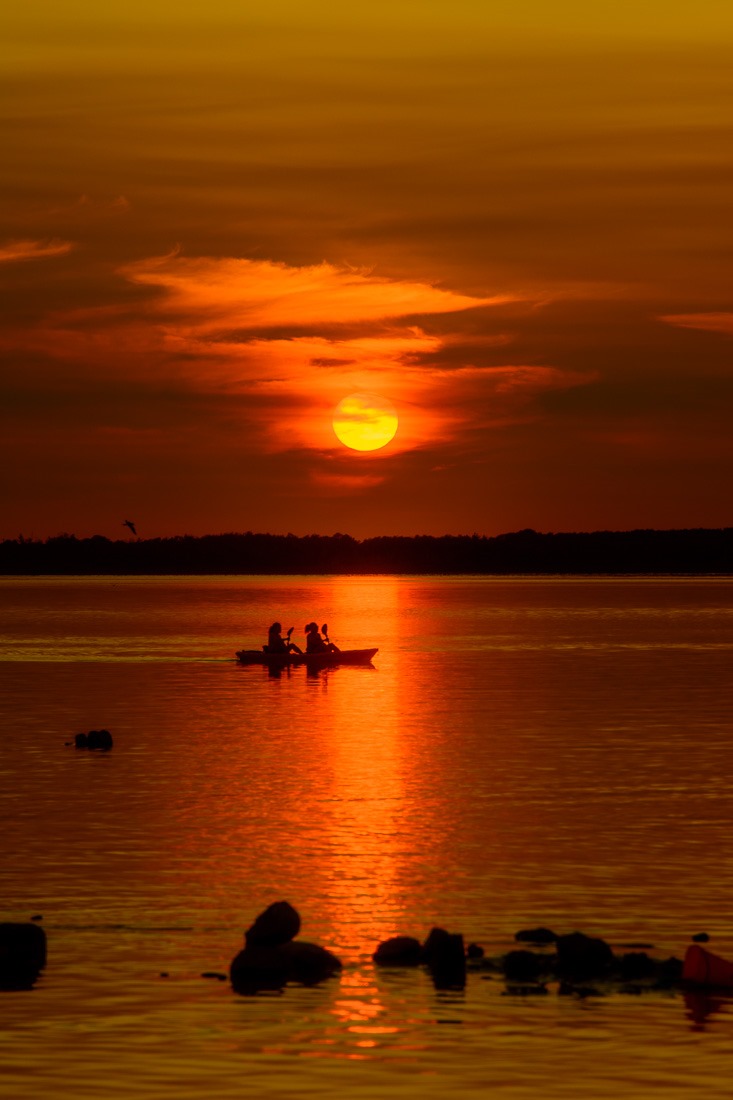 Yet a few minutes later, the best shot I could hope for that evening was the above shot. Some people didn’t want to give up paddling in their kayak and passed nicely through my sunset shots. This shot has only gotten minor adjustments and no colour adjustments at all. 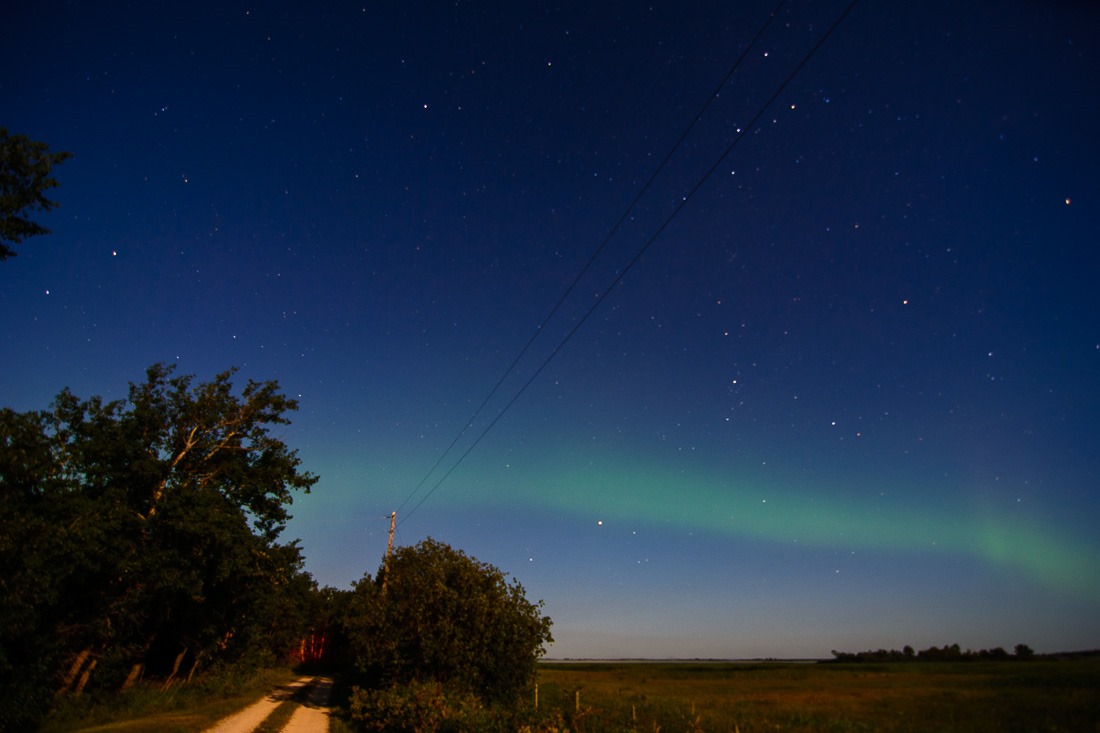 First Aurora of the year

But the night had more surprises.It was a full moon night with was lots of light. We couldn’t sleep and decided to get up and have a little walk. Now, walking at night is nice, but you will almost always find me with a camera and tripod as well. This night was no different. Once my eyes were adjusted to the darkness, the Aurora showed up quite nicely. Not really spectacular, but very welcome after more than two years of complete absence. 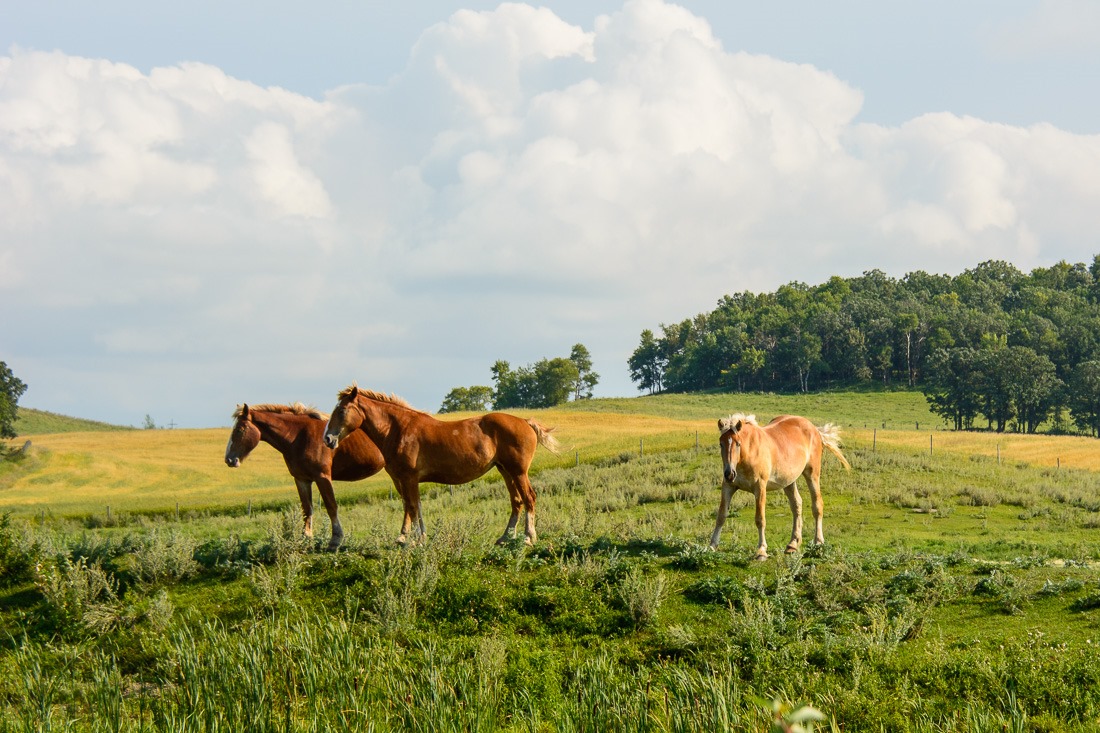 A few weeks later, it was the turn of South-West Manitoba for me. Going out with a friend, we ended up in the Tiger Hills. Named so for the striped vegetation, not for any live tigers in the area. The above roadside shot of the horses looked good enough to me for a jigsaw puzzle. But they don’t make them anymore. So I found an online version of that instead. You can try to solve the puzzle here. 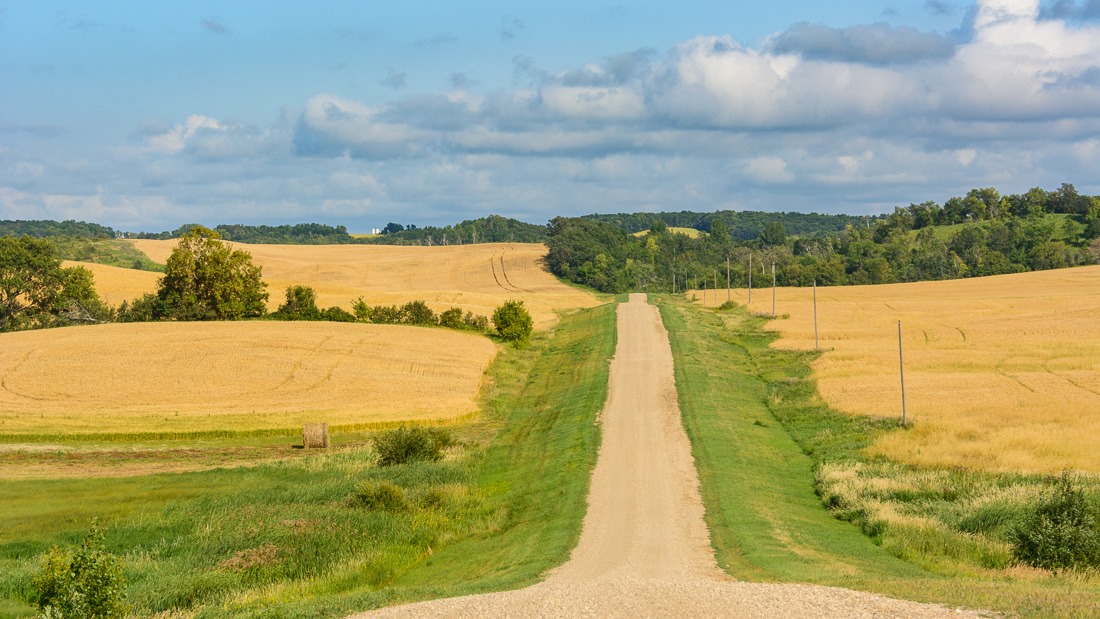 The hills of the Tiger Hills

The landscape over there is quite different from the prairie view we have around Winnipeg. Softly flowing hills and valleys are a feast for the eye when one is used to only flat horizons. Like I have said before, everything that is interesting needs variation. Always shooting the exact same thing over and over becomes boring and at one point will lose interest altogether. I try to alternate my subjects as to continue the interest in them.

Then, a weekend with another friend. This time into Ontario, into the “Unorganised Kenora” area. The goal was to arrive early enough in the evening to be able to pitch the tent on an uninhabited island. The island in question was an unnamed rock west of Boudreau Island. We ended up trying to find it in the dark, and we pitched the tent by the light of a few LED lanterns. Previous “inhabitants” had left a workable firepit so at least we had coffee before tucking in.

The next morning showed us the beauty of the area. The island was located in the Winnipeg River, a massive water system that sheds into Lake Winnipeg eventually. With nobody around but loons, eagles and gulls, the morning was very quiet. In fact, the whole day was very quiet, apart from the speeding boats around us, apparently taking part in some fishing derby. 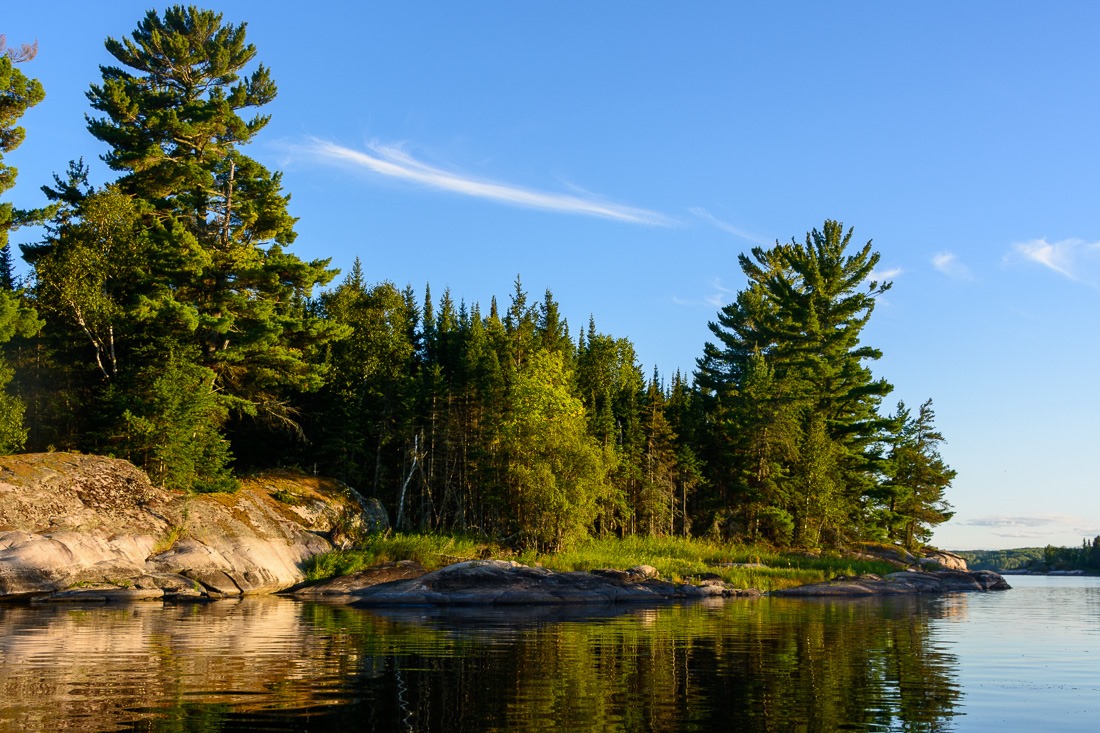 Sunset on the Winnipeg River

A fishing derby that mostly decided to deprive us of the evening meal. In the end, we got a few Walleye and dinner was served. Shown above is the atmosphere of serenity surrounding the sunset of that day. The next day woke us with harsh winds and no way to make a fire. We didn’t want to risk setting half of Ontario on fire for a cup of coffee. We left the area, had breakfast in a safe place and went home. 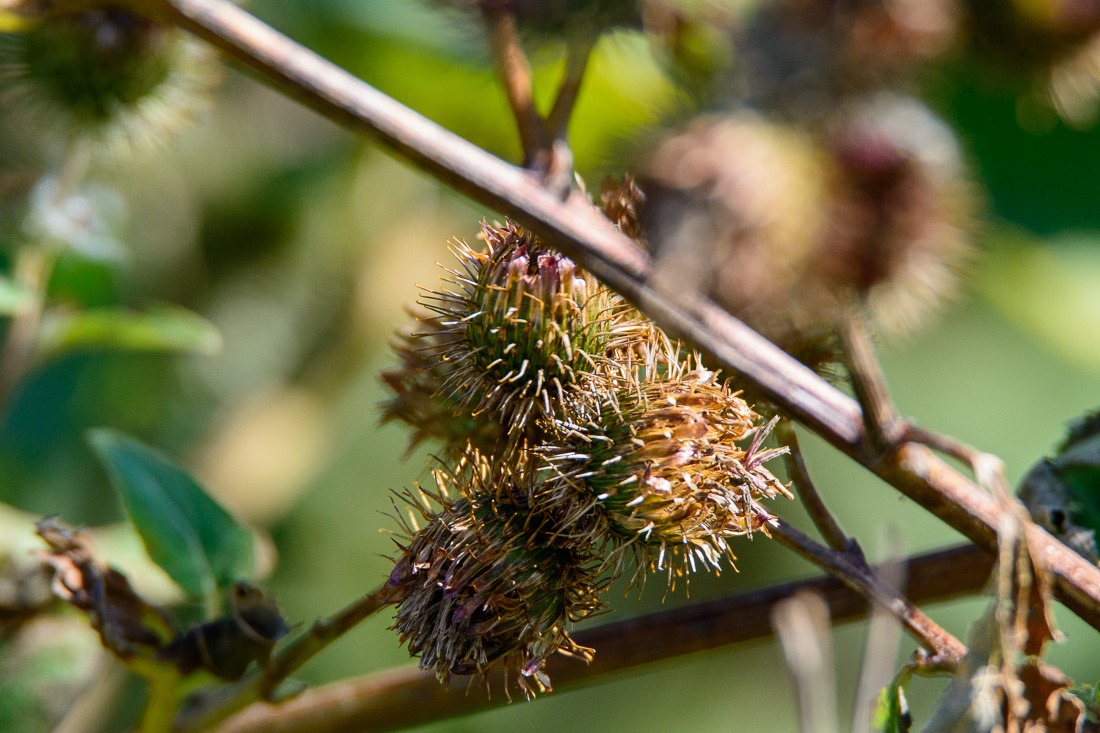 Burrs, waiting to hitch a ride

The next week already started to show signs of decline in summertime. While most is still green, some plants already show us what they have for us in store for Fall. A friend of mine would have said: “Oh, dead stuff!” Well, not yet, but soon enough. 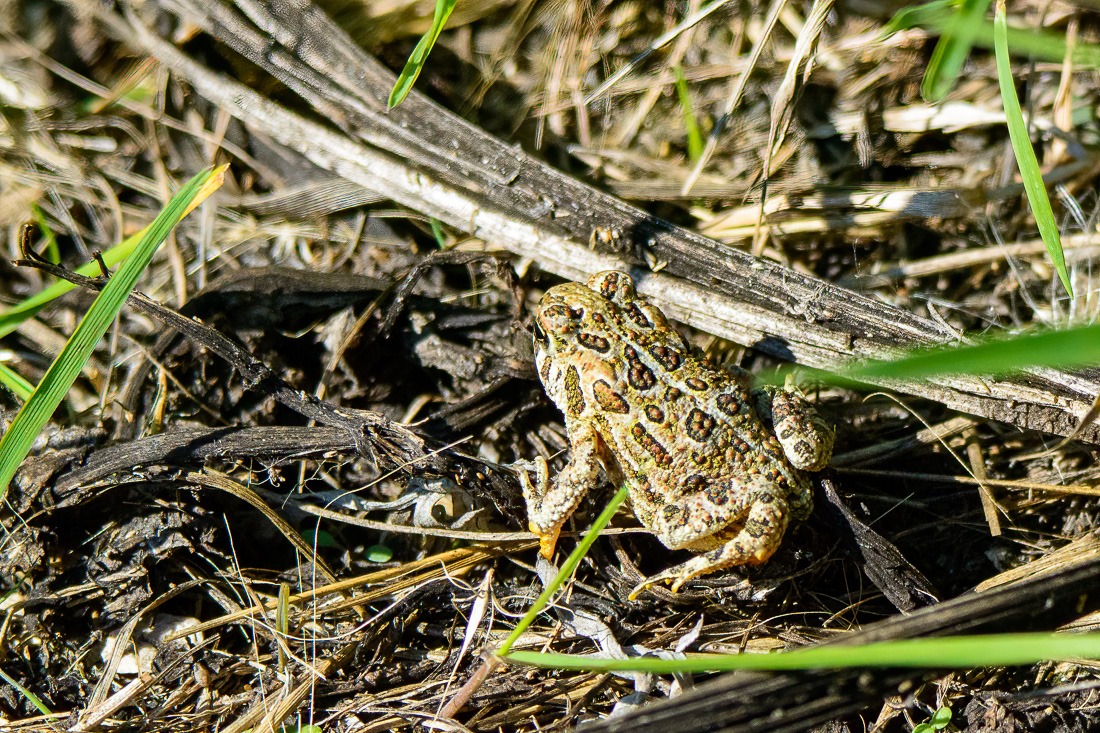 The last shot of the summer shows a little Canadian Toad. It was shot in Oak Hammock Marsh. There were plenty of them on the pathways, we had to look closely not to step on any of them. This one made it out of the day alive. You can see how well camouflaged it is in its environment. If it doesn’t move, you won’t see it.

And that’s also how we feel with summer. It moved, we saw it, but we have no idea where it went. Summer in a few images. Just from these few images, it is now clear that there was lots to do and done during the summer. However short we may feel it was.

Until next time in fall…