In the days of film shooting, long exposures were a dark area. You could end up with completely washed out shots or black ones. Without fairly expensive equipment like light meters and a few other odds and ends, there was simply no way to do long exposures properly. 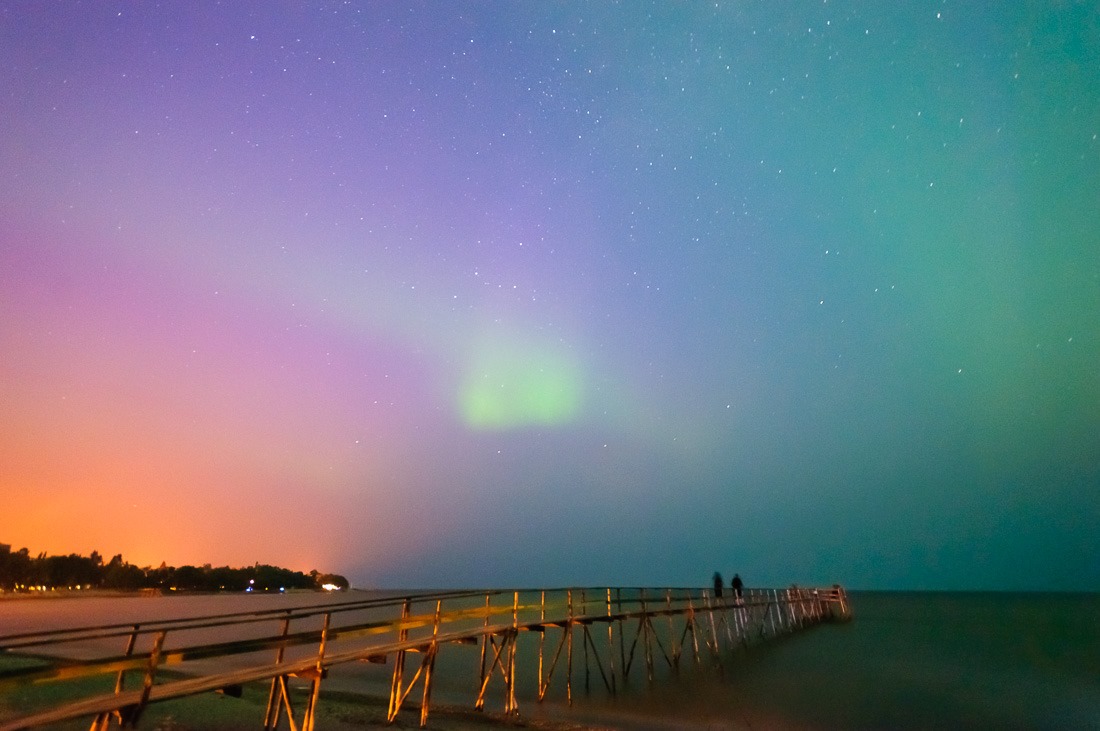 Once I was happy to shoot a passing firetruck and the gyro light showed up a few times in the shot. That was about the extent of my darkness shots.

Then came the digital era, where you could check your exposure on the spot. Too dark? Shoot slower. Too light? Shoot faster. It was now as simple as that. In film days I always shot manual, apart from a rickety light meter in my viewfinder. After a while, I found out that exposing with the needle through the loop, my shots were way too dark. 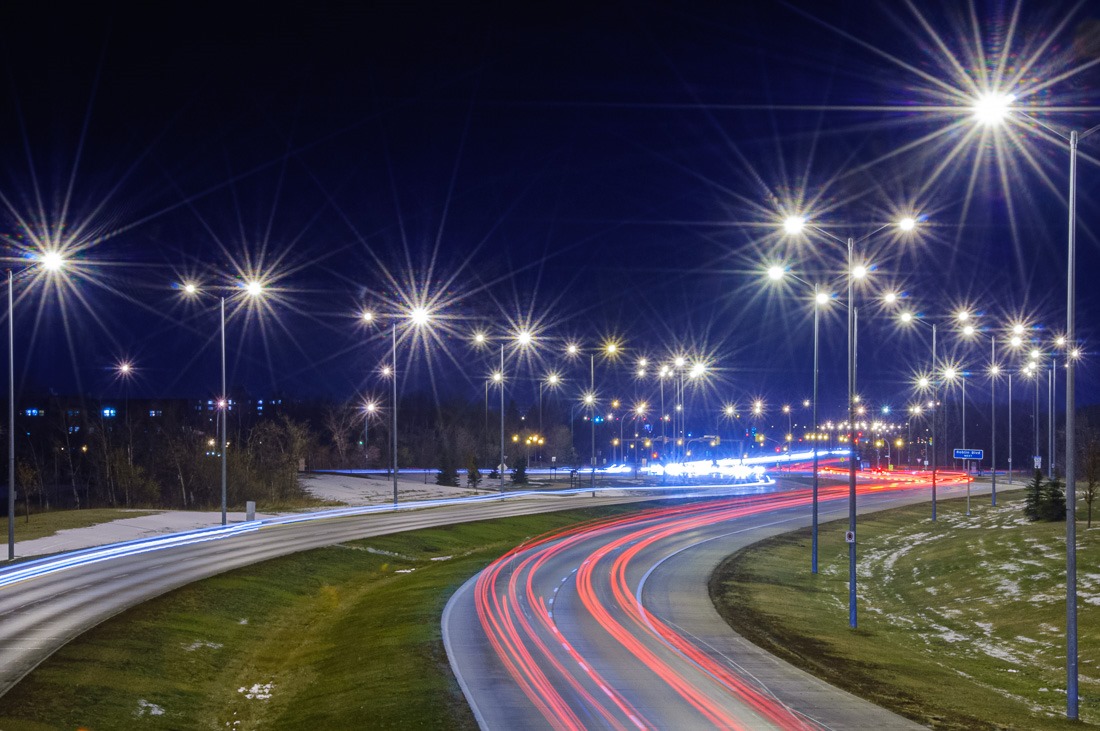 In those days, that was an expensive mistake. Luckily the completely ruined shots could be refused and thus remain unpaid. Getting light trails from traffic was now possible, unlike in the film days. The above shot was one of my first attempts to shoot light trails. The evening was still very young and I needed to stop down a lot. Like down to f/22 for the above shot. Nice trails but with a weird side effect. Those star bursts were not intended. 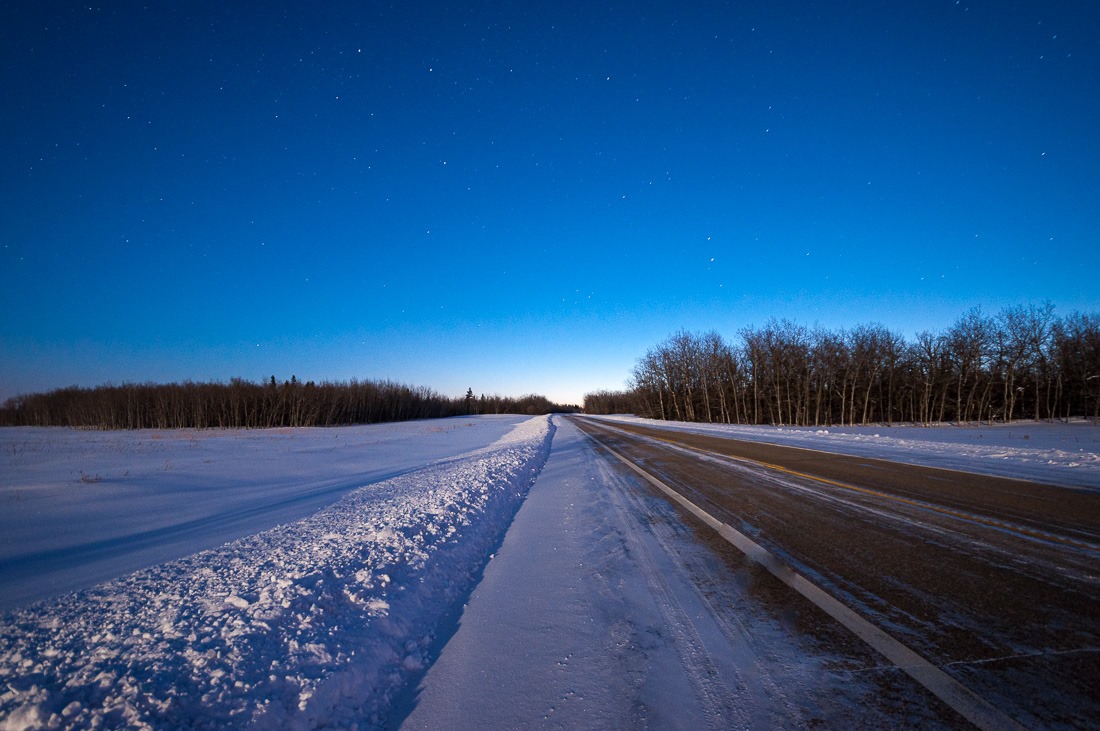 I later decided that light trails were not that interesting and switched over to night shots instead. Early morning shots, mostly. It was not too easy to keep me out of bed all night long to find something interesting to shoot. Scouting out locations was something that came later. 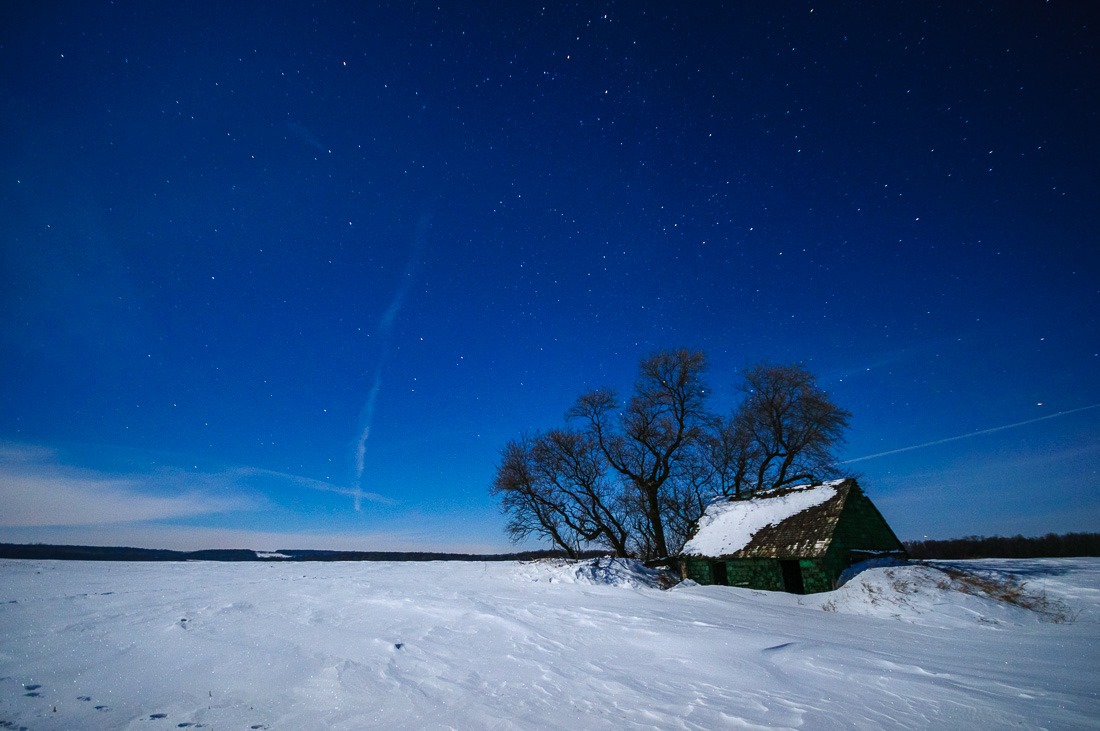 One night, a friend invited a few of us to go and shoot “somewhere”. I couldn’t find it on any map. Until she sent me simple GPS coordinates. Using those, I managed to avoid an out-of-commission bridge and end up at the gathering in the middle of the night. Until now, that photo shoot remains one of my favourite memories of night shooting. 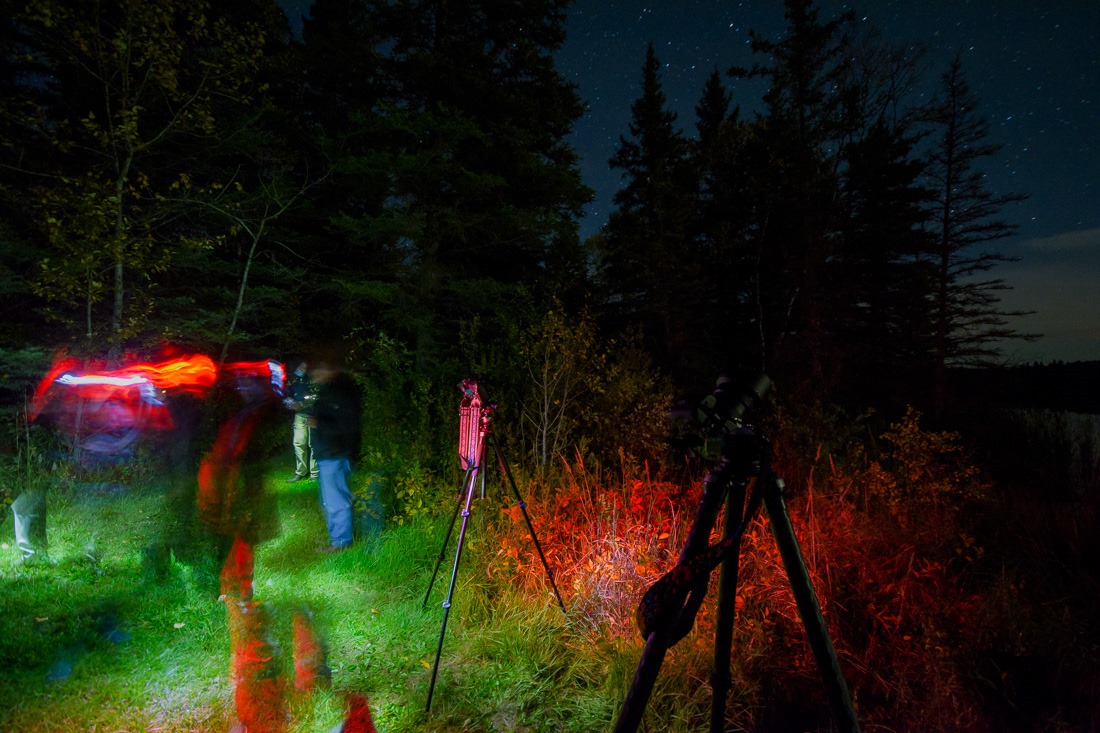 Shooting with friends in the night often yields similar pictures for everyone. Everyone is also lyric about the results, although getting them can become a little chaotic in the dark. The above shot was taken at Katherine Lake in Riding Mountain National Park during one of those chaotic moments. Somebody had “lost” a lens cap, it seemed 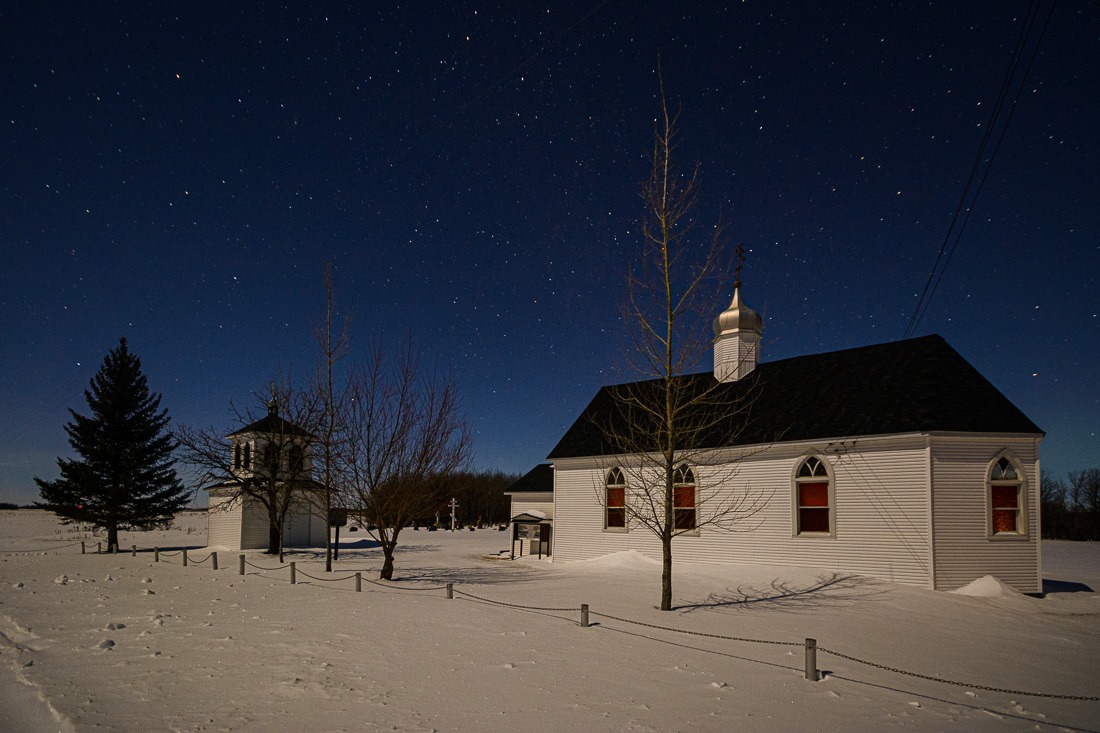 Other nights, I go out alone or with one single friend at a time. I had spotted this little church during daytime a few days before and was wondering what it would look like at night. A few nights later, it was a full moon, so my night light was provided. Clear skies to boot and the above shot was born/created. I had hopes for some Aurora display, but that didn’t happen. 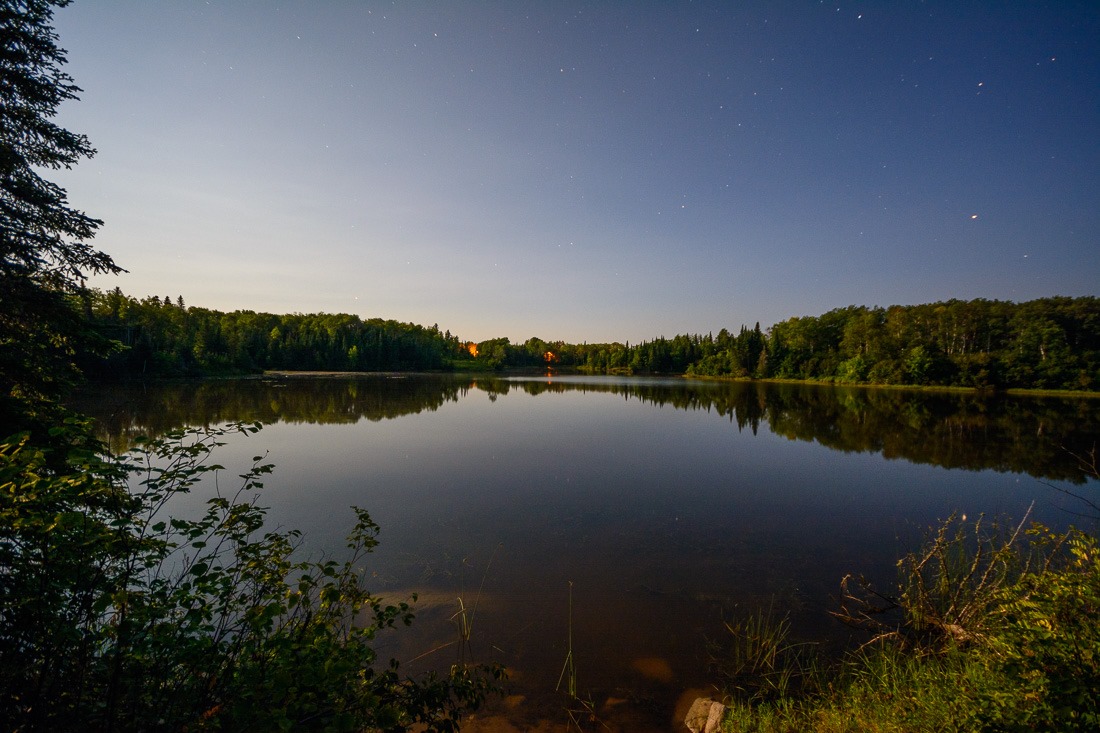 Other times, I just step out of the tent (on a campground) and walk around in the night. A few wolf howls didn’t scare me. This shot was taken in Manigotagan, during a few days of relaxation on a campground without amenities. I can still hear those wolves, though. 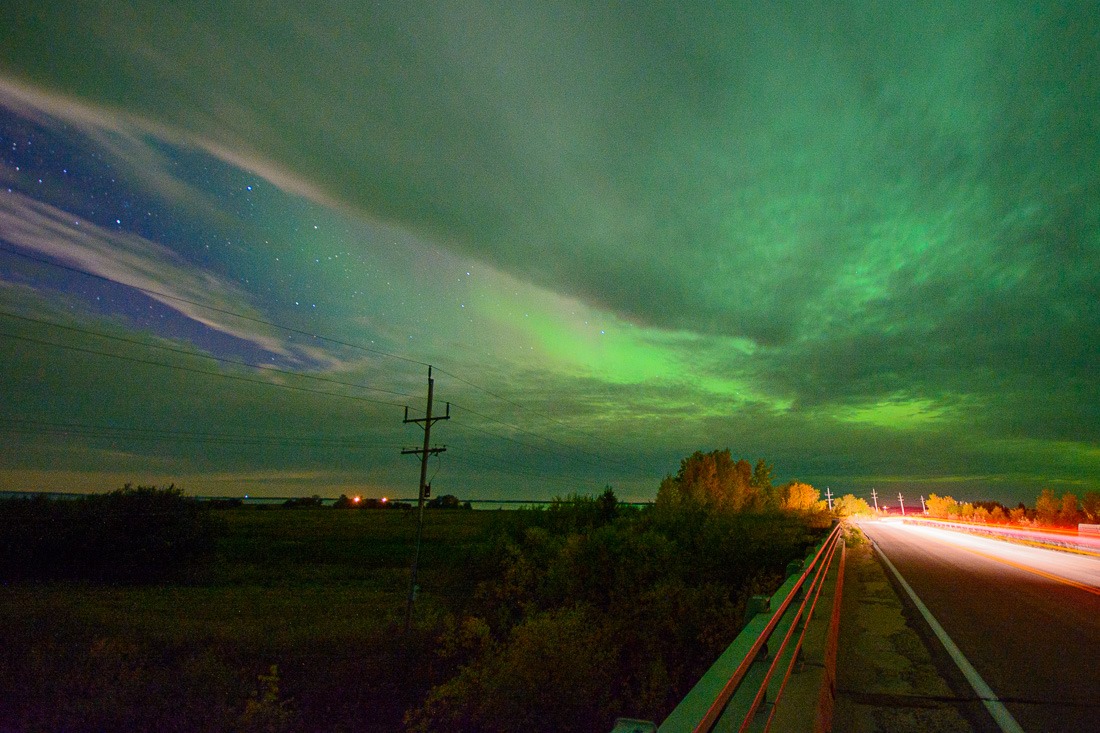 But the great attraction in the night has always been Lady Aurora. The green light coming down from seemingly nowhere. Yet, whenever the aurora is predicted, it also comes with overcast nights. The last few years have been particularly scarce in auroras. However, the night in the shot above was just beginning. An enormous light show was waiting for us, even if we had more or less decided to go home. I’m glad we didn’t. 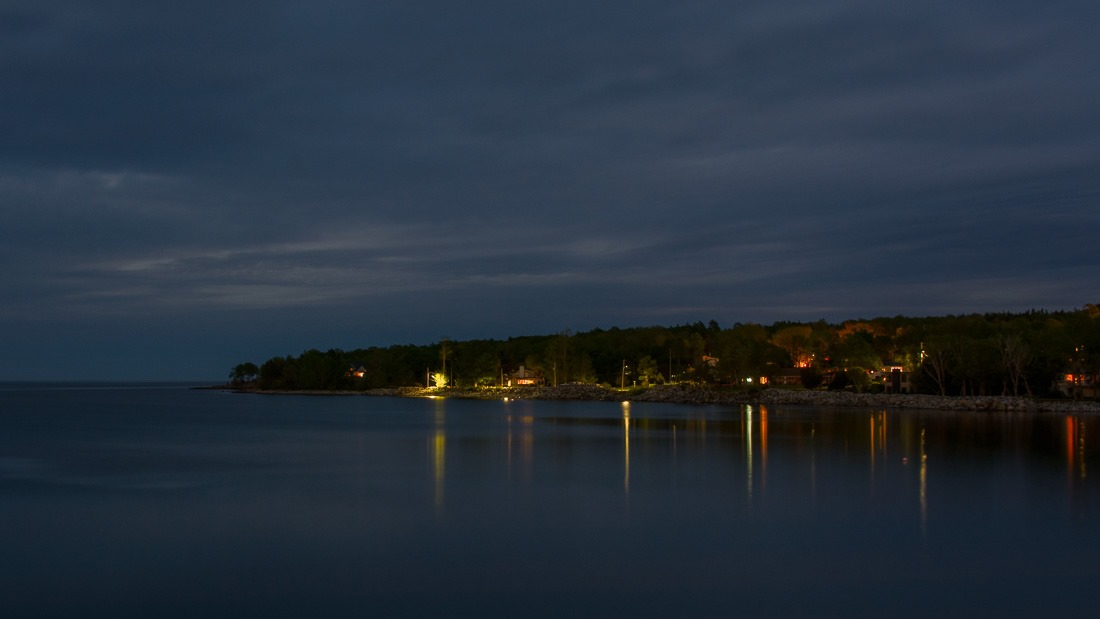 Liverpool on the Mersey, NS

Then there are the shots over the sea at night. These are pretty much impossible to get in Manitoba, Lake Winnipeg is the biggest water body we have, but it’s not a sea. Liverpool in Nova Scotia gave me the last two shots of this post. The river Mersey flows into the ocean at this spot. Hardly a breeze of wind made for a nice reflection on the water. 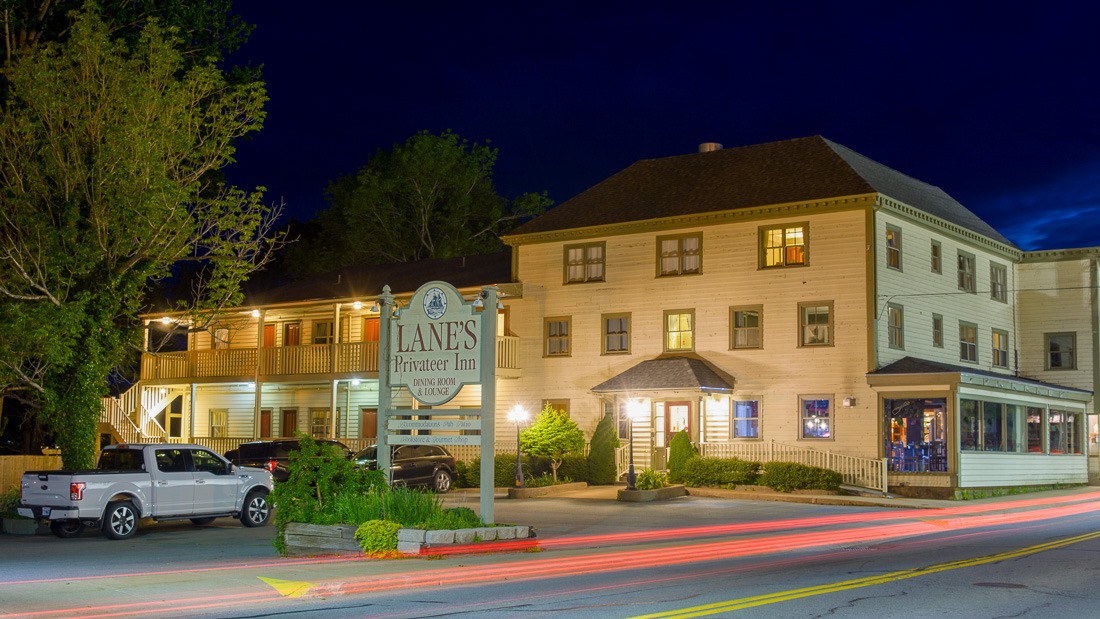 So if we were in Nova Scotia, we needed to stay somewhere as well. A wooden structure, hardwood floors and wooden walls made for a very nice, rustic hotel. Surprisingly quiet too, with all the wood around us. A night shot with a few light trails to boot, that’s the end of this post.

Digital is much better for long exposure shots. No more guessing and no more disappointments getting the prints back. All benefit for me