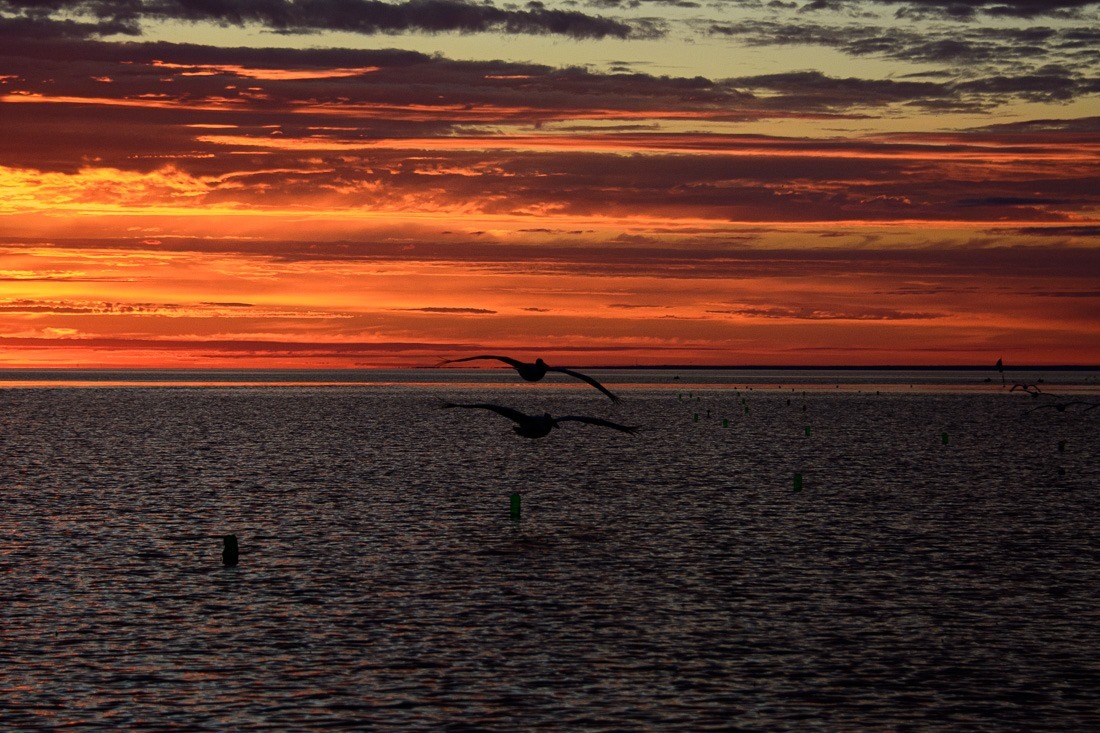 It also makes for deadly situations if one is not careful. In high wind, Big Windy is not a good place to be. Fortunately for me,

a friend an I were invited to come along on a fishing trip that had no waves to speak of. We started off at around 3am, just to get ready for boarding. Coming from The Netherlands, fishing boats are big and noisy. Here in Manitoba, they are small and fairly quiet. Even if the small engines seem to make a racket to wake the dead. All in all, it’s quiet during the work. 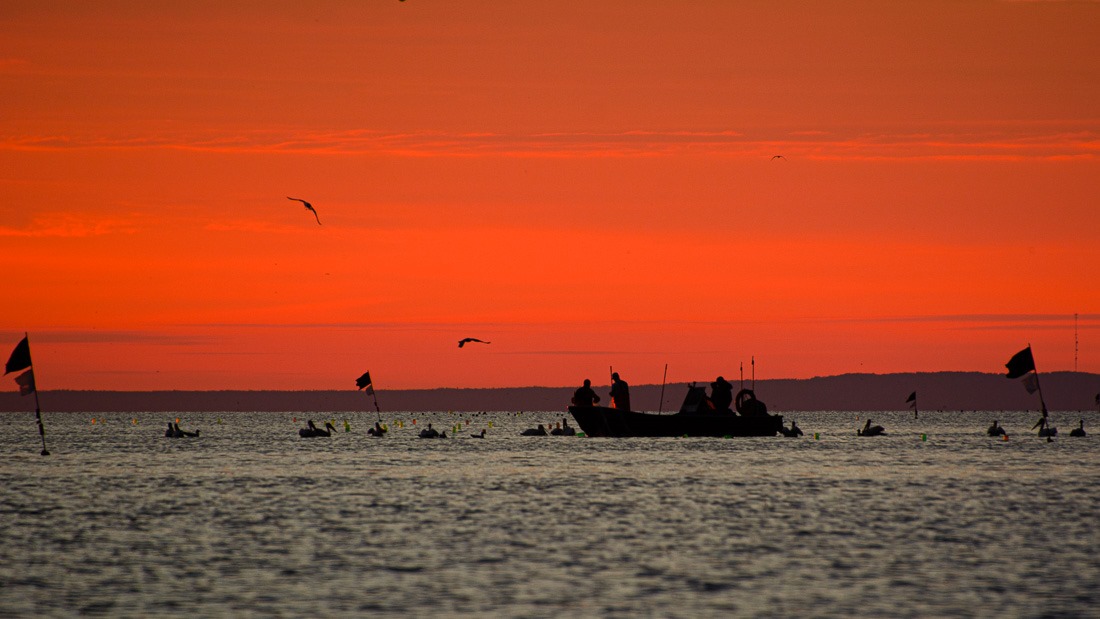 Once the boats are in place over the nets, the work starts for the fishermen. Pulling up their nets, emptying them and releasing them in one smooth movement. Most of the fish stays in the boats to be sold later on. 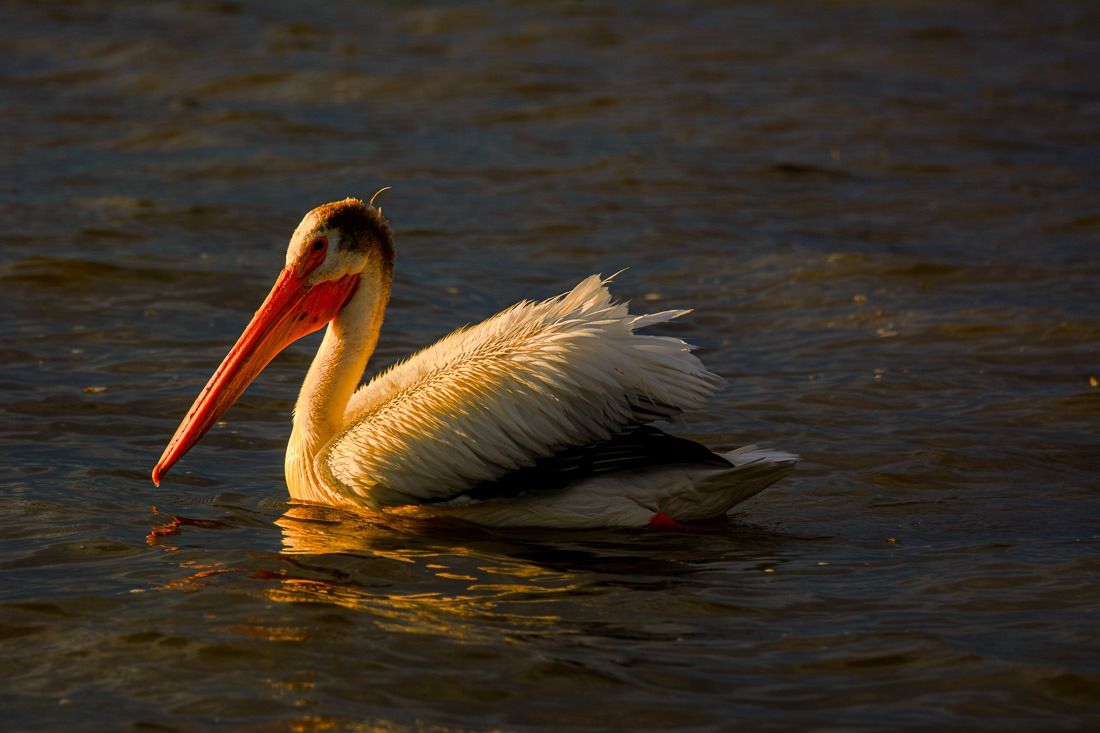 Glowing in the sunrise

As usual, there are some profiteers not far off, and as soon as they hear the engines of the little boats, they swarm closer. These are not Pirates of Lake Winnipeg, just some gulls and pelicans

. The fish that is not for human consumption is thrown back overboard, dead or alive. If those fish are still alive and fast enough, they can avoid becoming a meal. 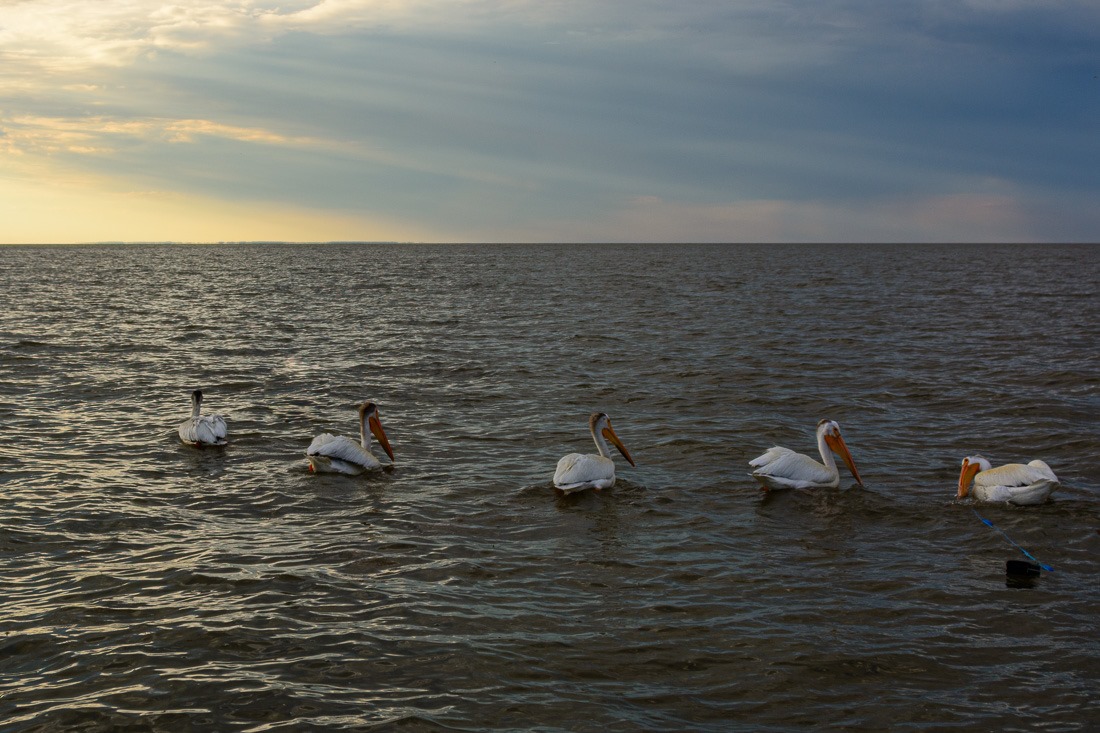 But for that, they need to be really fast. The pelicans have perfected their way to get to the fish. Often it is a bit stunned from the manipulation on the boat and from being stuck in a net. They make for an easy meal for the pelicans. Fishing in a perfect line, the survivors of the net have little chances to escape them. 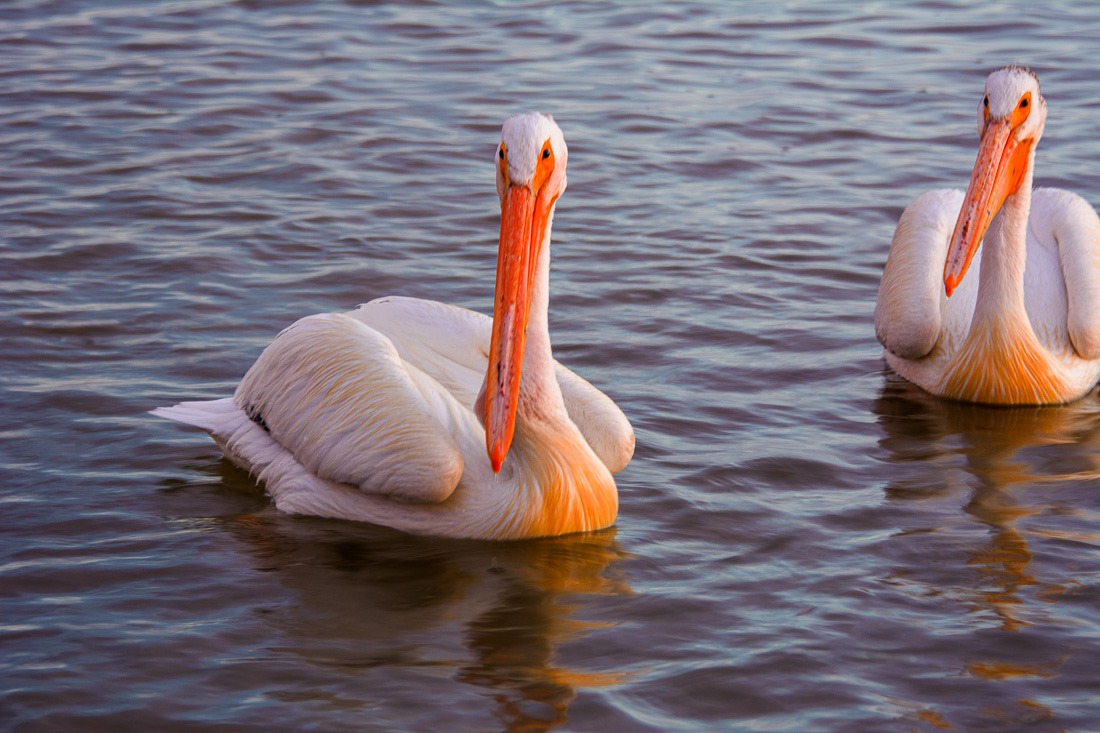 Some pelicans come very close to the boats, as if to ask if there is nothing easier for them to eat. They have no shame

. While the pelicans fish up the scraps from the boats, the fishermen do all the hard work. They remove the walleye from the nets, throw them in tubs and move on to the next fish and net. 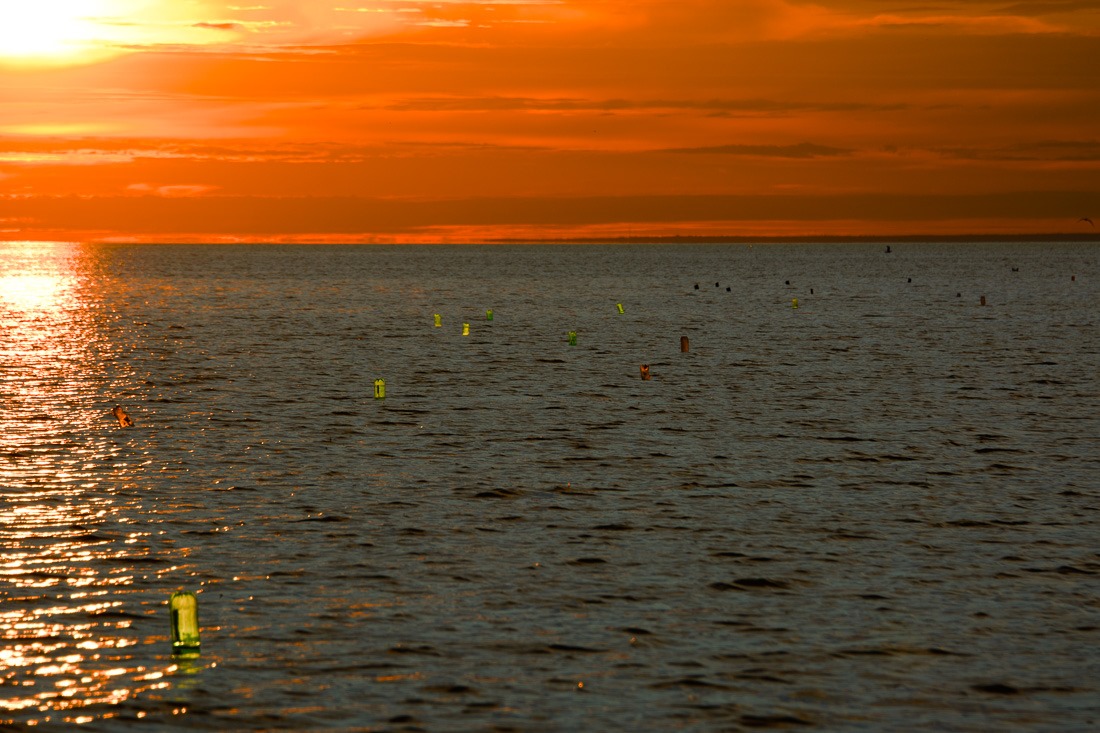 The nets are marked with simple means like green plastic bottles. In the rising sun, they glow like bright lightbulbs.

The colours of the sunrise that morning over the lake were simply fantastic. We were lucky to have this kind of weather on that day. While my friend had all kinds of talks with the fishermen on another boat, I seemed to have selected a very quiet lad. He didn’t say much and soon my banter apparently fell on deaf ears. Oh, well. Nothing I could do about it, as changing vessels was not an option during working hours. 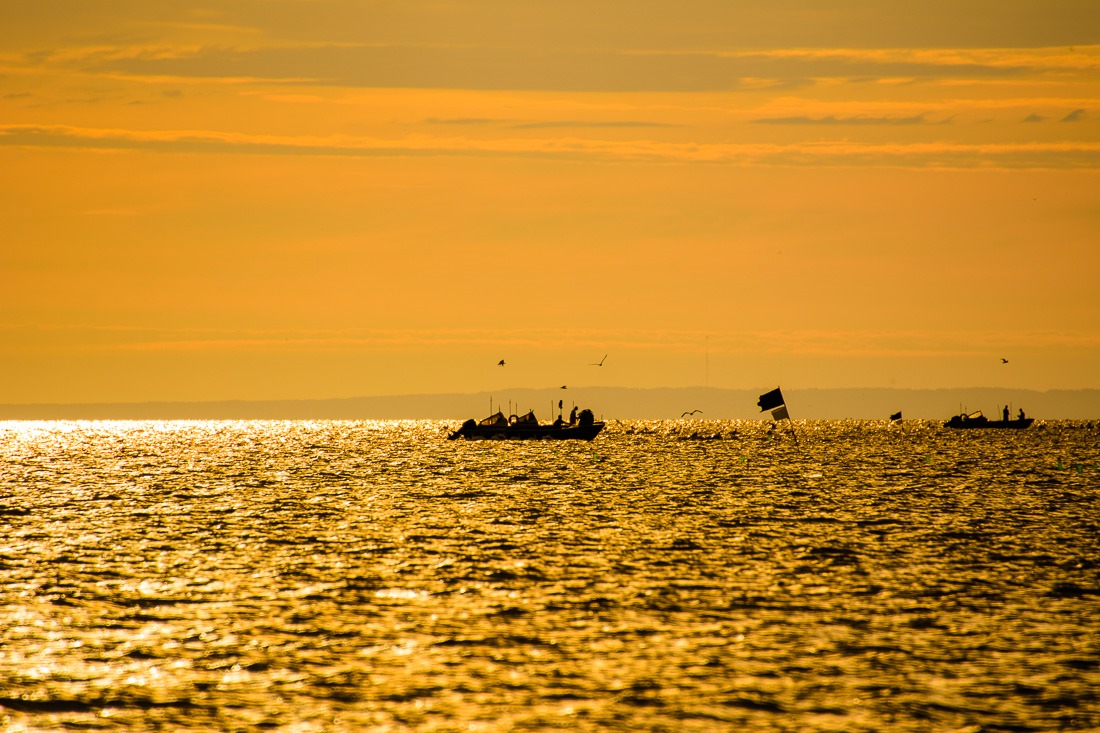 Hard at work, except one…

I could hear my friend from far away, as laughter carries far over water. The quietness in my boat gave me the opportunity to shoot a LOT of pictures. In fact, there were so many that later on, I had to toss many in order to keep only the best. Even the tossed ones were good, but how many times can you shoot the same stationary subjects and come up with something new? 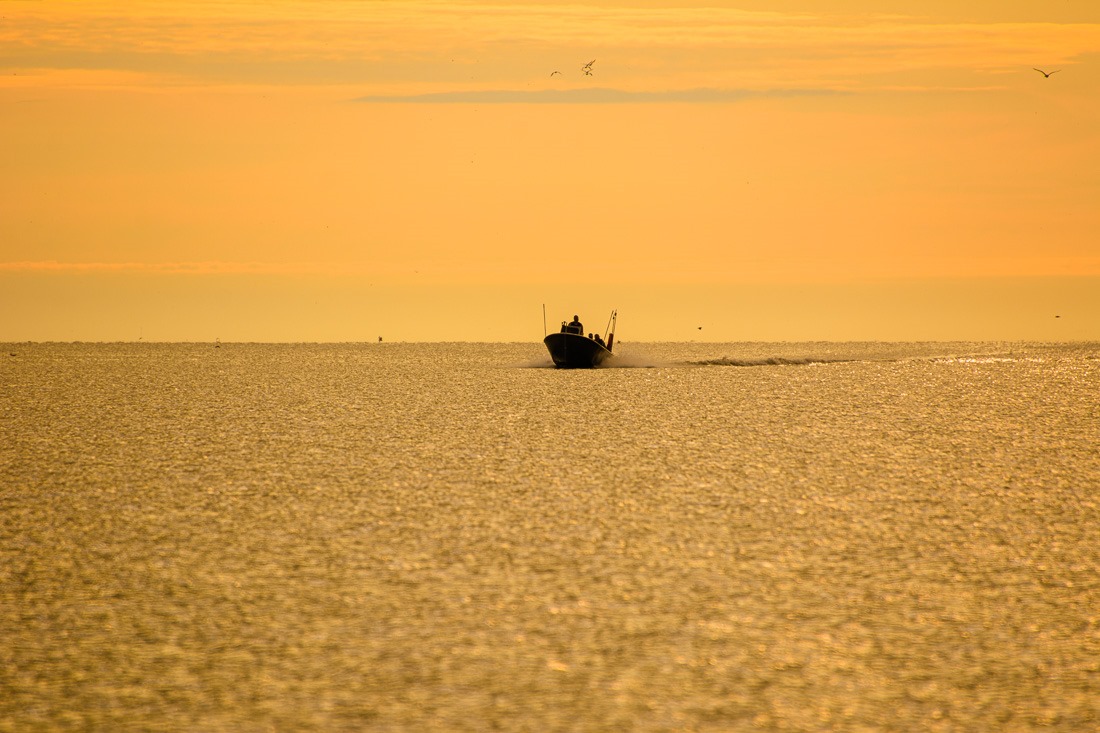 After a few hours we returned to land, we thanked the captain of the fleet and went home. We left the Winnipeg Beach area by 6:30 in the morning. Time enough to get some breakfast, go home and have a nap before work would start. The work for the fishermen continued on land, as they needed to sort the fish, clean it and then freeze it before it could be sold to the different businesses in Gimli, Winnipeg Beach and Winnipeg. Lake Winnipeg feeds thousands, every day. When I see that in different places there is a lot of litter on the beaches, discarded fishing line or even complete gear, that makes my blood boil. While I don’t ask for anything on this blog, for once I will ask this: Please do not litter! It hurts everybody’s bottom line and stomach in this beautiful area.

The colours in the pictures of this post have not been exaggerated or altered. The morning was clear after a few days of rain. The air was still very humid and the sunrise simply coloured everything a golden hue.