Lately, I have been out and about to find owls. They live here year-round for the most part, but some have come from far to be photographed by me. I do get snubbed by them some years, but eventually they come back and pose nicely. 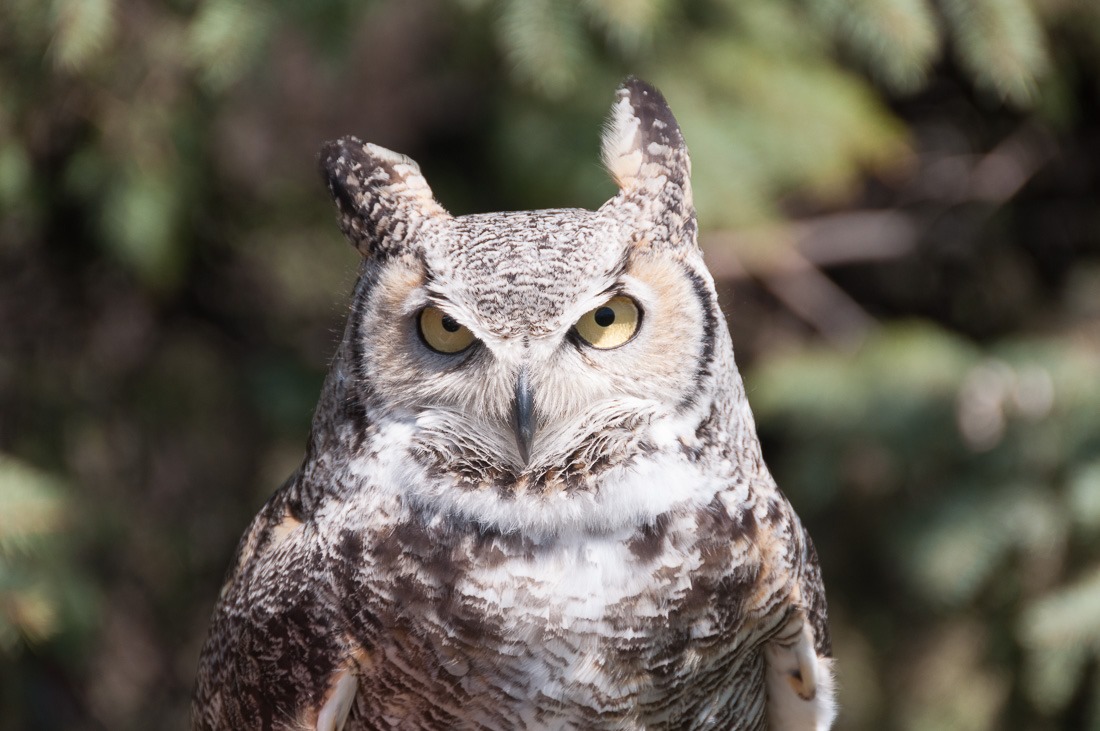 An owl has always had that “wise” look over him (or her). Always slightly disapproving of whatever you are doing.

I post some of the shots I get in those outings on Facebook, Instagram or Flickr, so you may recognise some of them here. The idea for this post was to emphasize the expression on an owl’s face. Most people can get an owl from far away, but getting closeups is fairly rare. 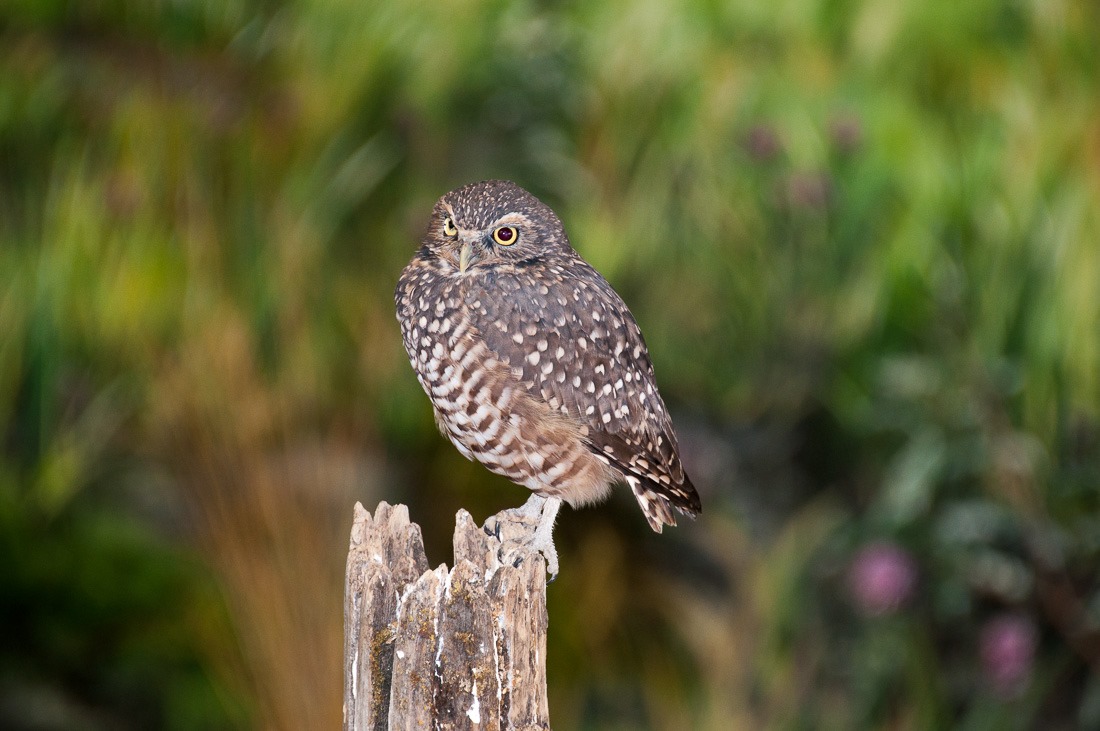 Getting a shot of an owl looking straight at you is uncommon, to say the least. It’s not so much that they are interested in you, more the opposite. You are completely uninteresting to them. Unless you interfere with their food source. 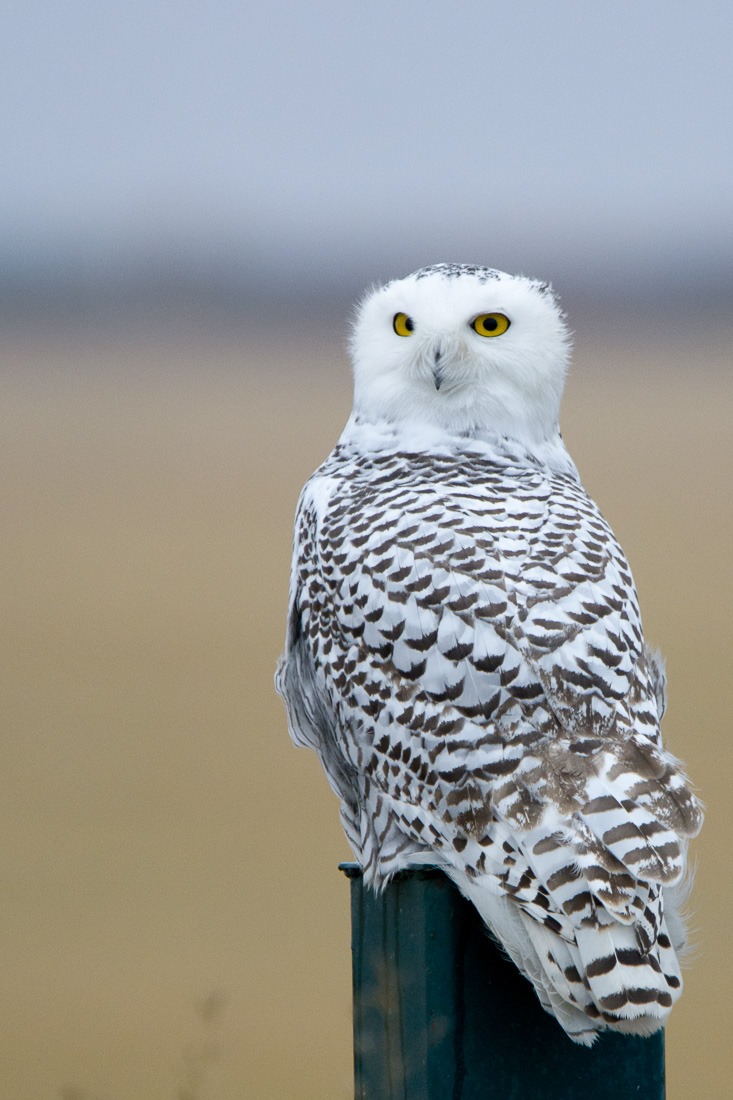 They usually don’t attack unless provoked, but they will fly away and deprive you of more good photo opportunities. That will be your punishment. A few years ago, there was a spot not too far from the city that became suddenly very popular for shooting Great Grey Owls. They were feeding close to the road. Thankfully that was not a thru-road, so traffic was fairly limited and slow. But at some point the cars and photographers were simply lined up next to each other to photograph the birds. 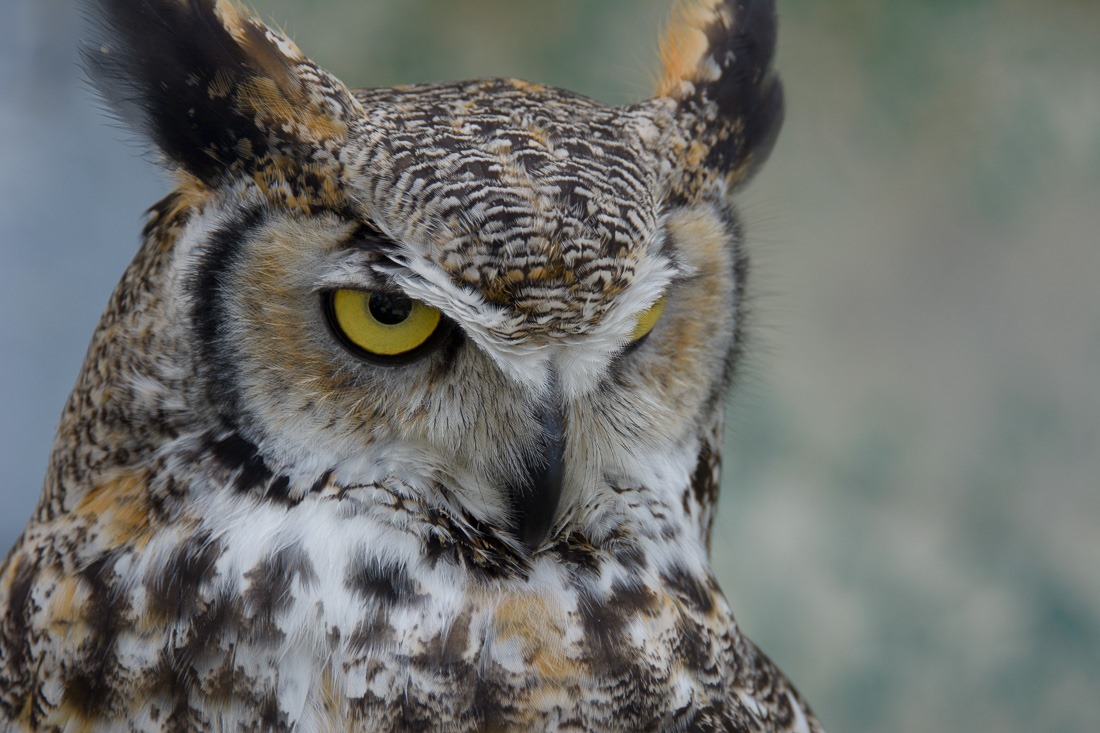 Some people even went as far as to step into the hunting grounds with their camera and used chips bags to make “enticing” sounds to get a good photograph. Needless to say that after this type of harassment, the birds moved away. Seven years later, they still have not been back there. I guess that bad memories stick in their heads too. 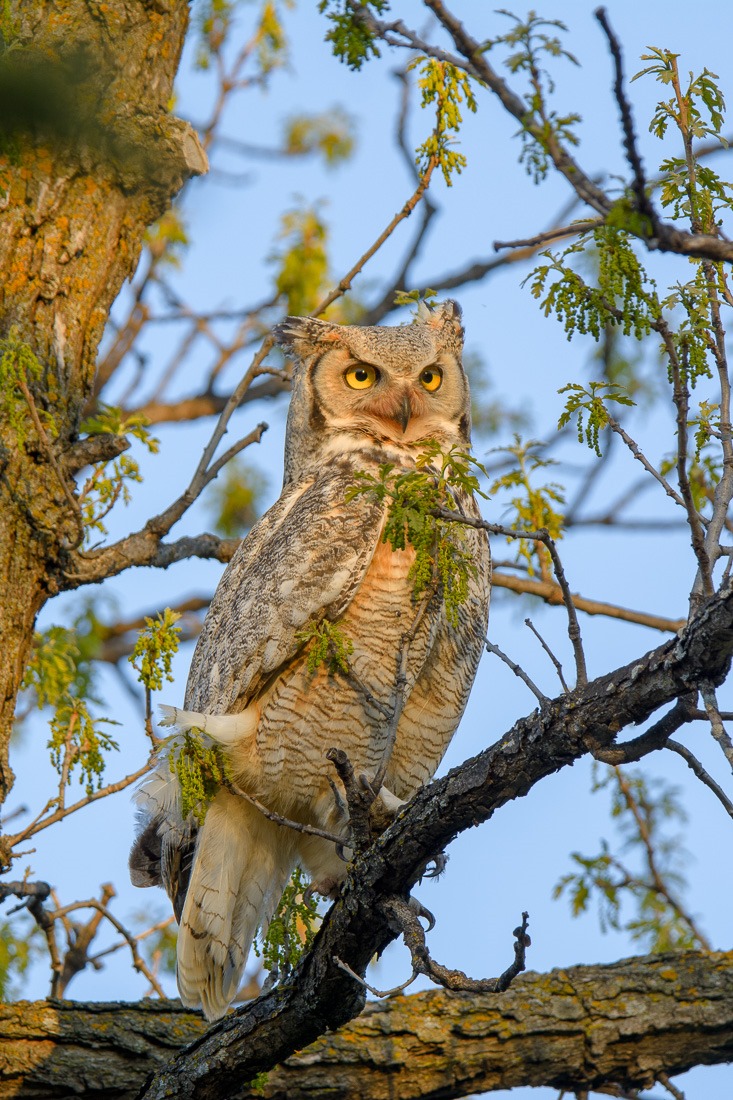 Great Horned Owl in the sunset

Luckily, a friend of mine and even myself, know where to find other birds that are not harassed. We also make sure to stay far enough away  from them so they can continue to hunt and feed themselves. 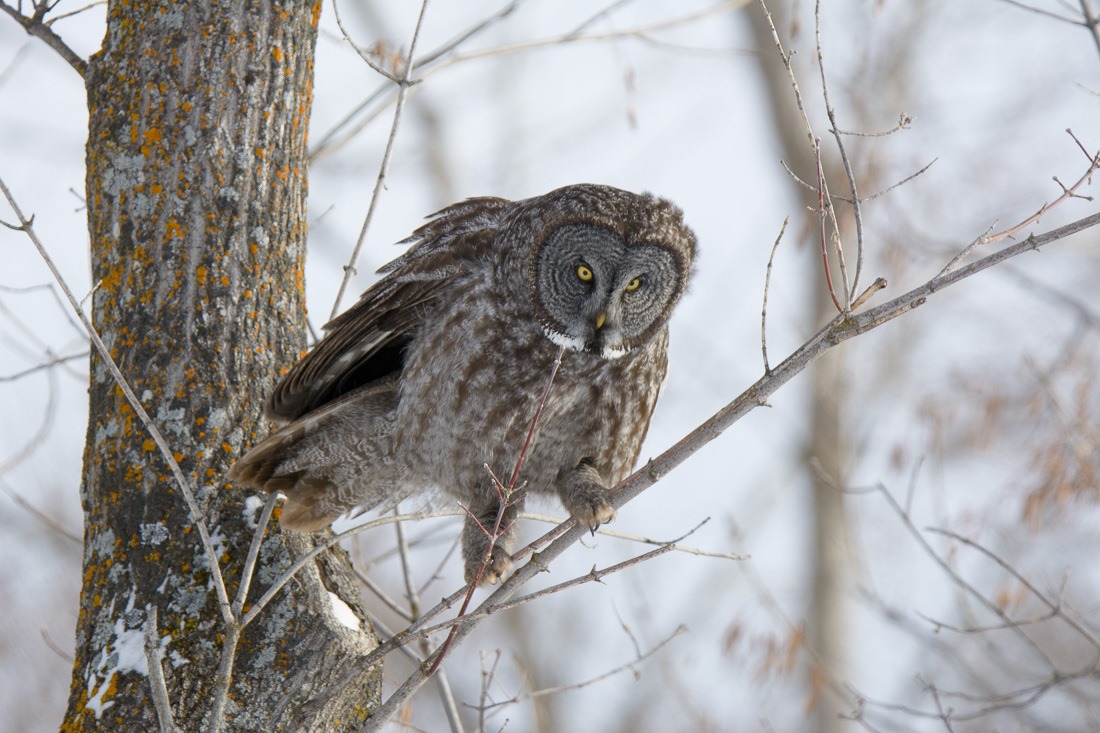 As a result of seeing continuous disrespectful behaviour towards owls, I do not provide the locations where I found the birds. Not to secure a “stash” of birds for myself, but for their protection. There is nothing more painful than to see emaciated birds trying to hunt, but failing due to human stalkers. With or without cameras. 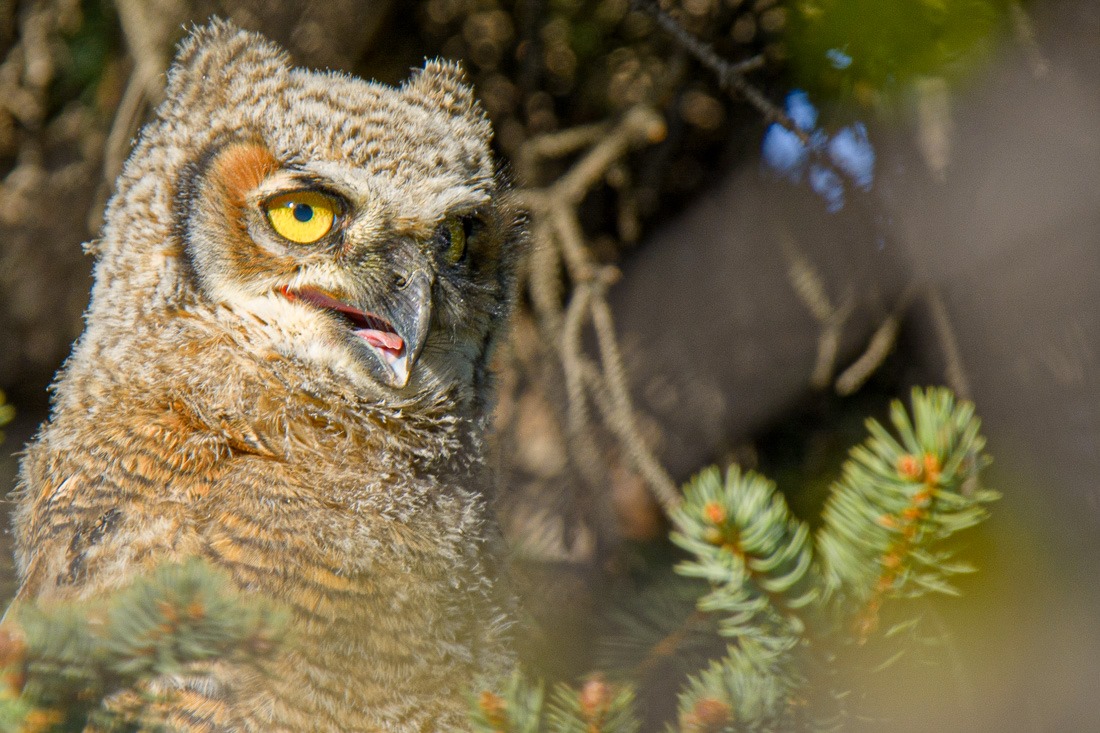 Other times, the owls are nesting in fairly prominent places in the city. Yes, inside the city limits. They are usually not bothered by humans and simply ignore them. When the time comes, the young are there to be greeted by photographers “in the know” as by now, others also refuse to give up locations. The youngster above was not even interested in humans and continued to make faces for his or her siblings. Coming season this one will be back to create and raise its own family. All to the enjoyment of photographers. 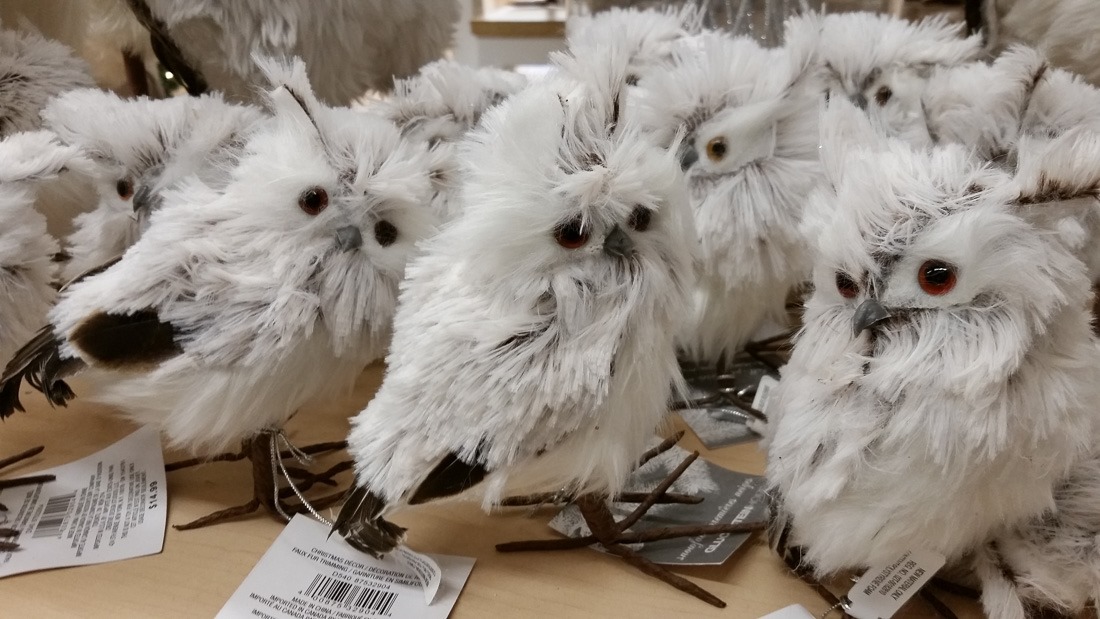 Some people resent that I never give out locations, so I will make one exception. There is one species that I can give a location for, although by now the location is no longer in use. The above Hairy Owls were found at the Home Outfitters store on Regent Avenue in Winnipeg. I believe their siblings are still available at The Bay in Downtown Winnipeg.

Owls are plentiful in Manitoba year-round, but if they don’t want to be seen, you won’t see them. Period. So go out and keep your eyes open for these magnificent creature, be respectful and enjoy their behaviour from a distance.