When the weather is inclement, the photo opportunities are plentiful. We’ve all heard that. Some go storm chasing, others brave the summer heat to photograph a melting ice-cream cone. In winter, I like to go out at night when the flakes are coming down. 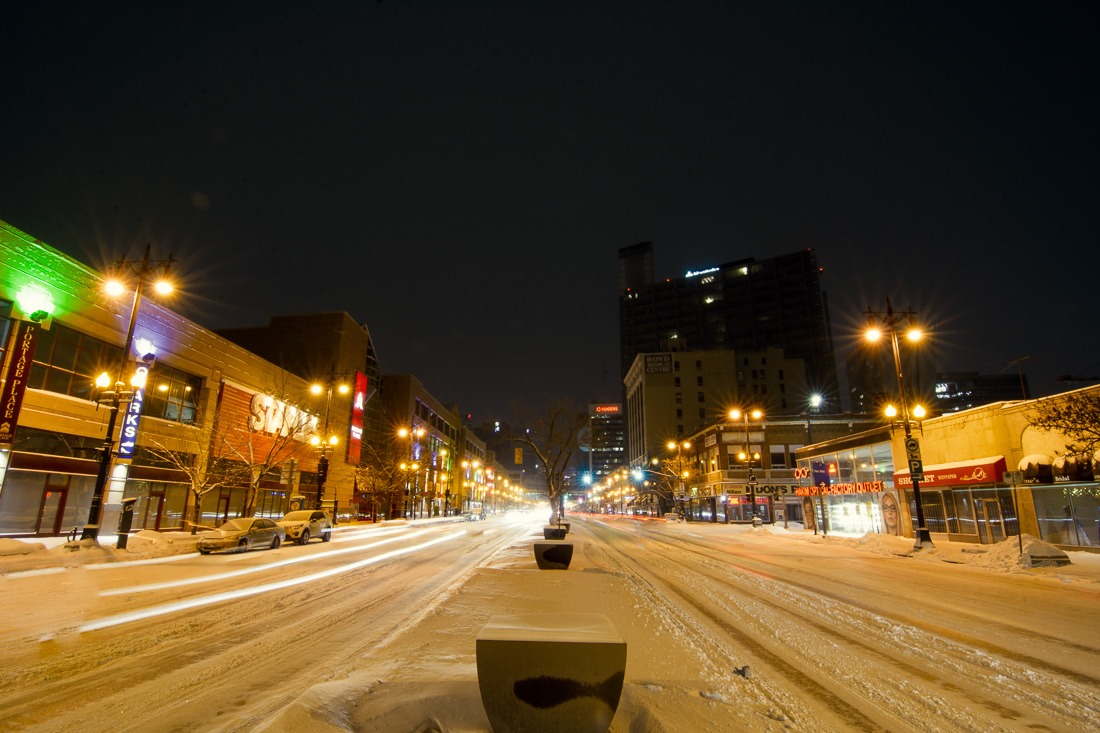 Incidentally, the temperatures are usually also fairly inclement. The last time I went out, it was no different.

I placed a last-minute message on Facebook, asking “Who wants to go out tonight?” The “overwhelming” response to it was “no thanks, too cold!”. Except from one friend who said she would come out with me. So it was the two of us in the cold evening, downtown Winnipeg. 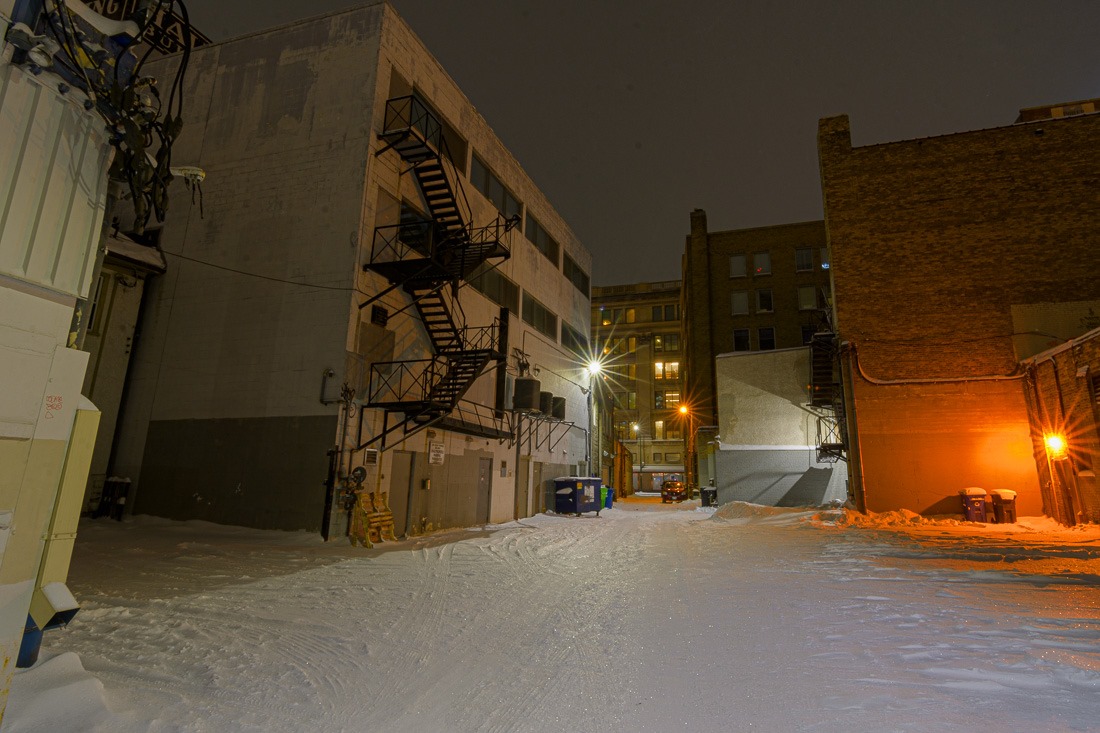 We stumbled across Portage Avenue, literally. The road was extremely slippery. I was wondering how one can drive in those conditions, but car tires are better adapted to those conditions than my shoes. A few shots from the centre of the avenue and my fingers started freezing up already. Not a very auspicious start of the evening. Portage and Main is considered to be the windiest place in North America, and by –20C that is no joke. 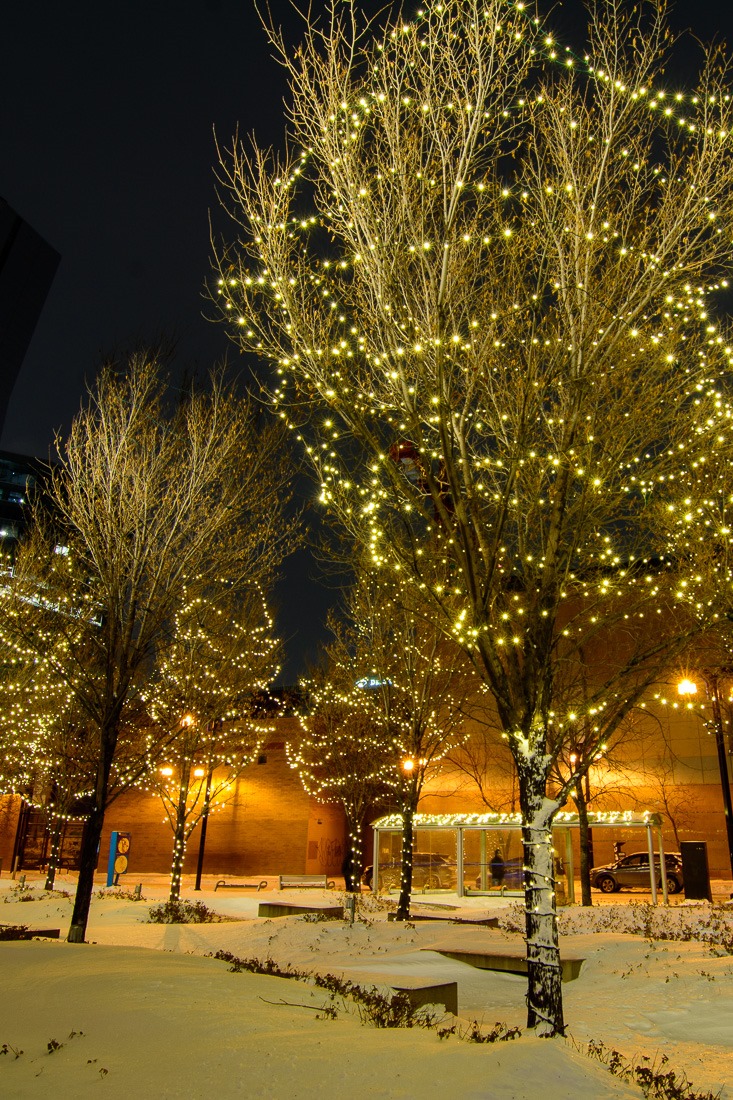 Windchill was around –34 at that point, so we decided to go to a little more sheltered place. One of the back lanes in the area was fine to warm up. Once warmed up a little, much was not possible here, we moved toward the Manitoba Hydro building. With all the energy efficiency they boast of, they could have made it a little warmer outside. Festive decorations were still in place, so a few shots here and there and we were out of there. 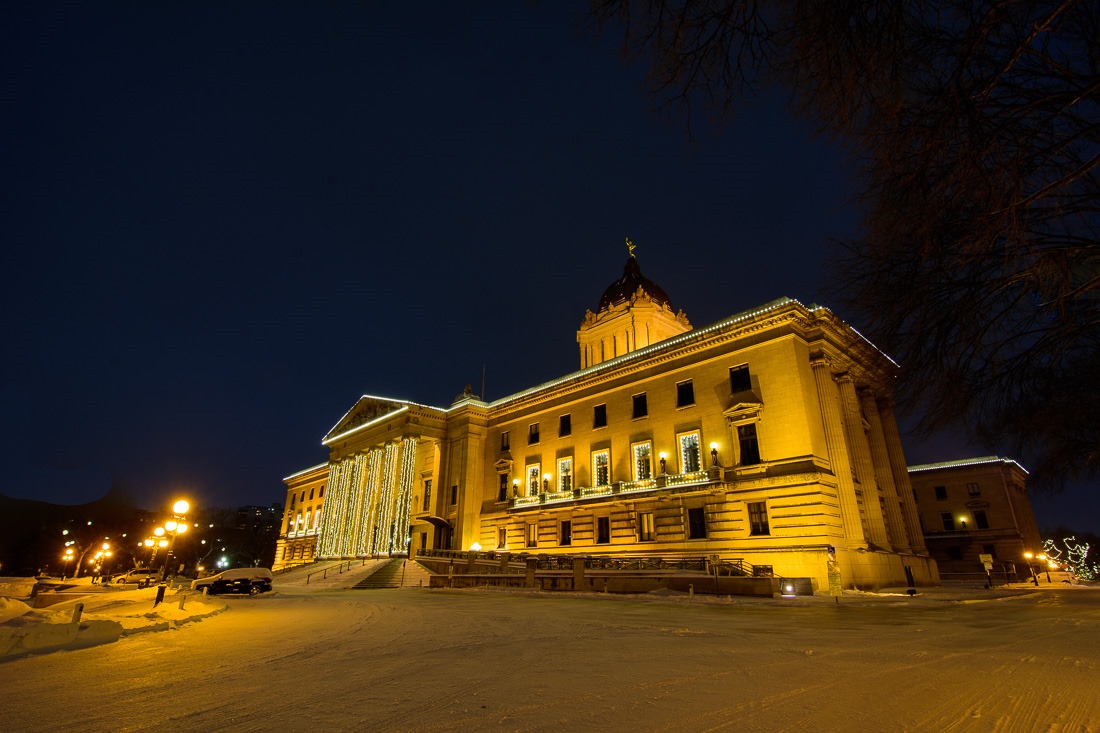 Lights are on, but nobody home

Then we moved towards the Manitoba Legislature. With the “Manitoba 150 year” event this year, the festive lights are supposed to stay lit until mid summer if I understood correctly. It will be a nice opportunity for more photography once the temperatures go up a little. Already on this cold night, there were dozens of cars moving by. I wondered what that was all about. 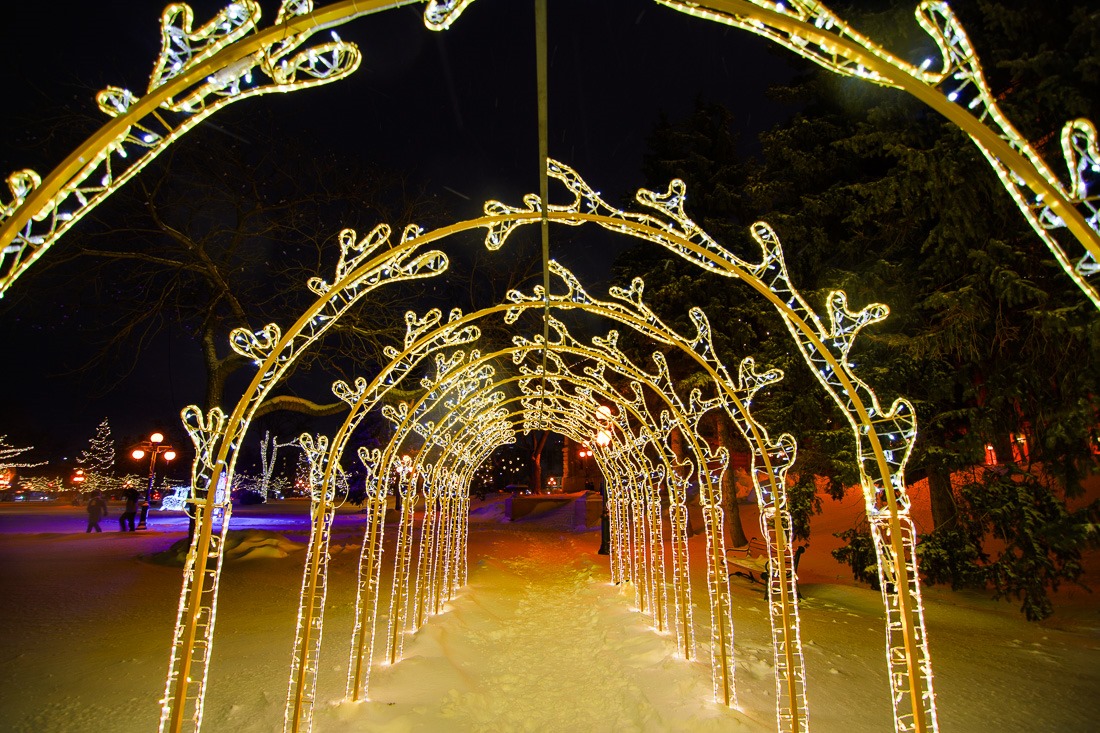 Then we saw this little light tunnel. Everyone was underneath to take some (well-deserved?) selfies with their cellphones. Once everyone had left, I shot the scene for myself. I have no use for selfieists in my shots. 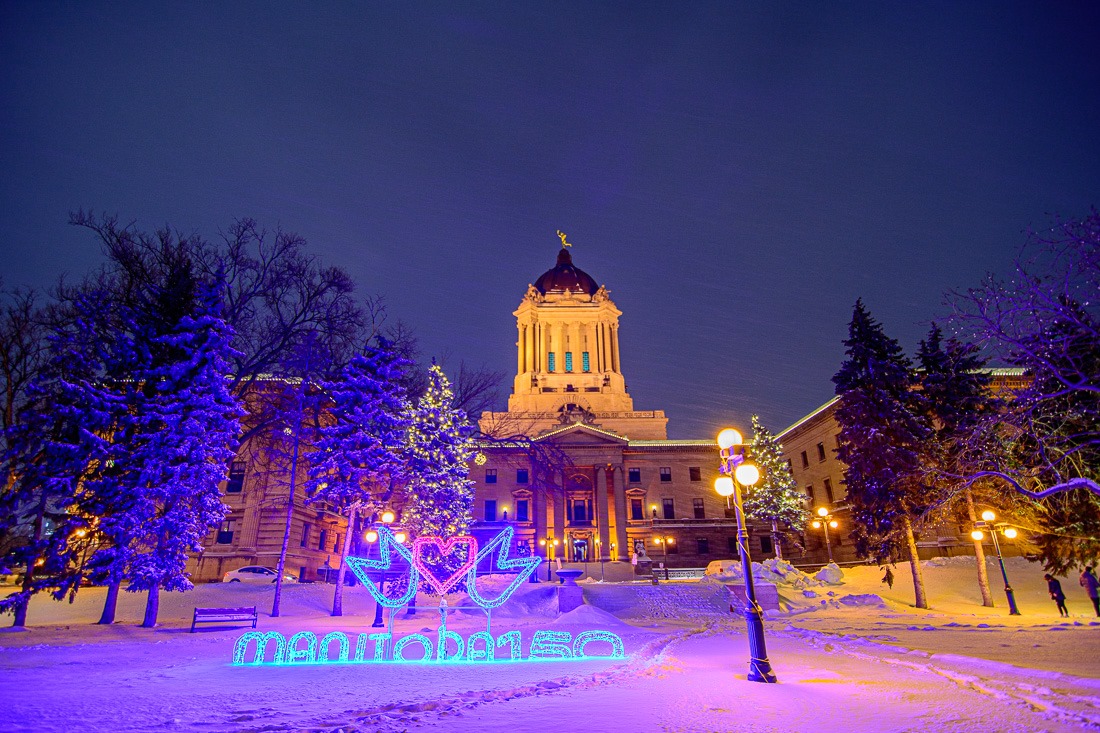 But Manitoba 150 needs to be photographed. The signs had just been put up, then layered with some fresh snow from the last few days. Above the streetlight you can see the streaks of the blowing snow across the field. It was not, as I had thought at first, dirt on my lens. 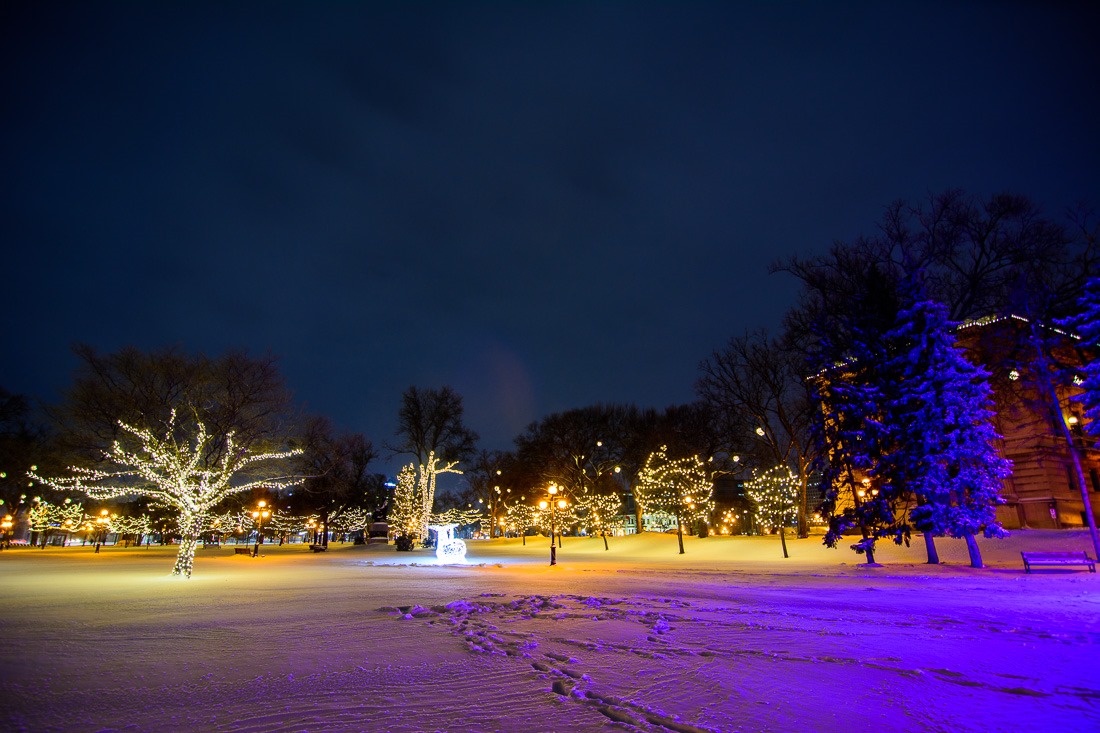 The weather is always a nice starting point for me to go out. Another point was that I got myself a new lens I dedicated to night photography. A nice 11-16mm f/2.8. For those who are not into photography, this sounds like mathematics gone wrong, but to the initiated, it means a nice lens. It allows for fairly short shutter speeds while still getting enough light to get a decent image. 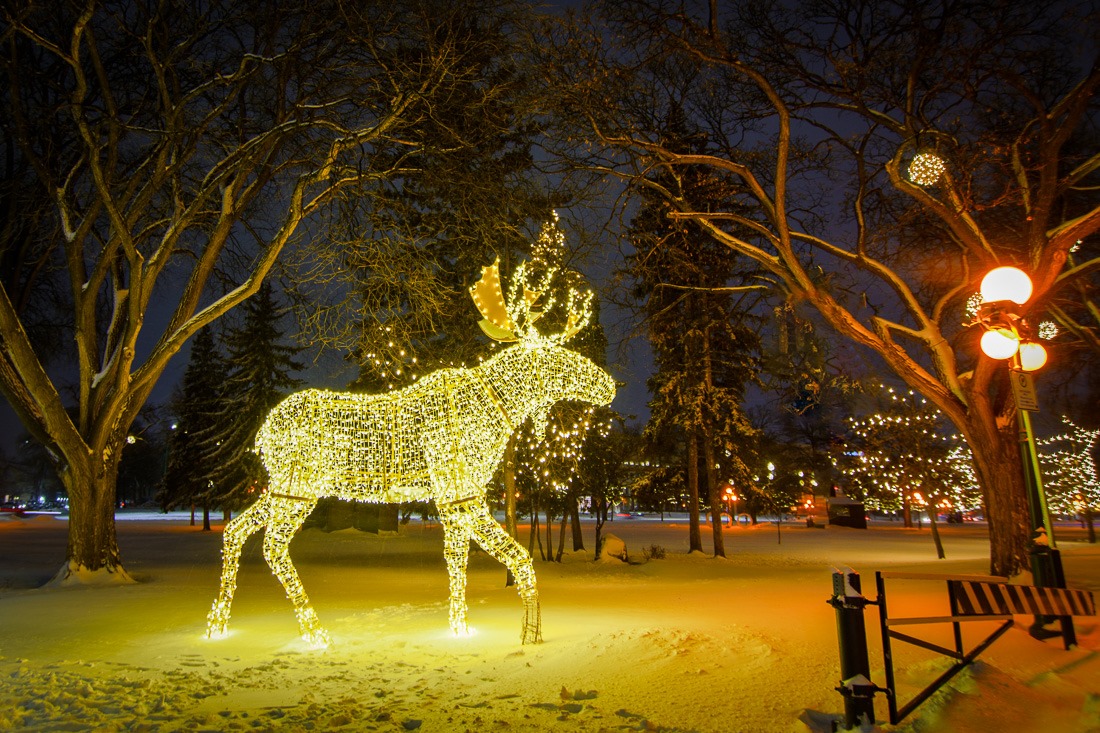 Once the front and side of the Legislature had been photographed, we went to find the wildlife. There is  usually enough of that in Downtown Winnipeg, and this evening it was really lit up. I guess that this Manitoba Moose had really deserved its place in the legislative gardens. 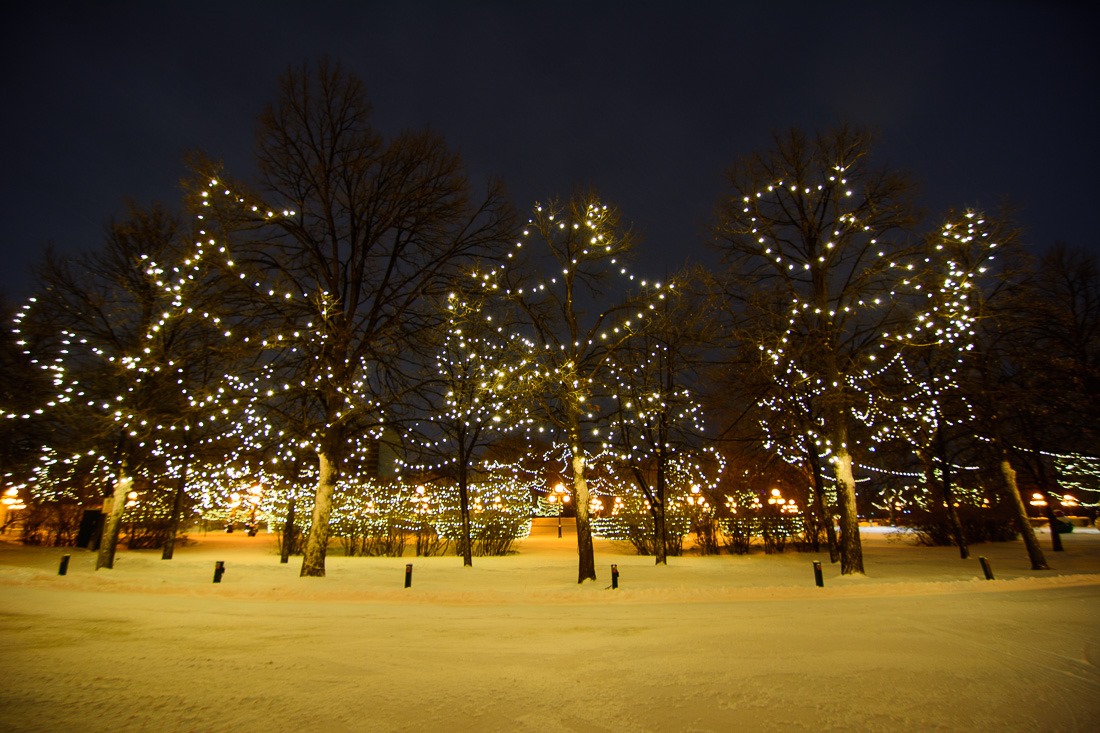 Somewhere in there stands Louis Riel

The back side of the building was also lit. There was literally no place to hide in the dark anymore.

As it turned out, there was also no place to hide from the cold and we decided to call it a night. Even if it was only just after 9pm. It was dark, it was cold, it was lit up, all we needed for some nice photography. The wimps stayed home, we went out and got the shots