The winter months have arrived. From now on, the nights will be longer than the days. Even more so when skies are overcast and laden with snow. This is the time I like to think of myself as a night owl. No need to stay up late or get out at unfriendly hours to enjoy some of the night sky, sunsets and sunrises.

This is my time to shine for night photography. I can get up late and still shoot sunrises.

I can shoot the Milky Way on my way home from work. Now that’s the way I’d like it. Once I’m done shooting, I can still relax at home with a nice shot of something, a good movie etc. 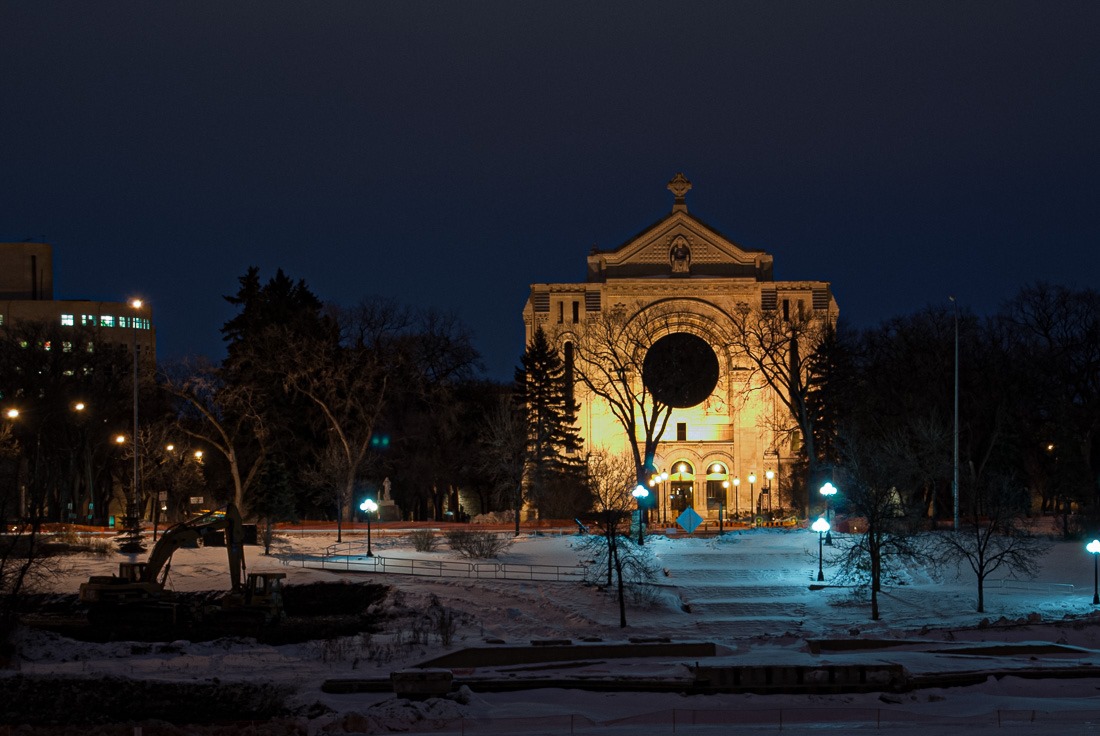 But is that reality? Probably not. It is true that longer nights get me outside earlier for shooting, but won’t get me inside and sooner. I love shooting in the night, even if lately I haven’t been doing much of it. There are times when the soft bed is more alluring than a cold freezing wind after midnight. And everybody knows that you need light to make photos, right? 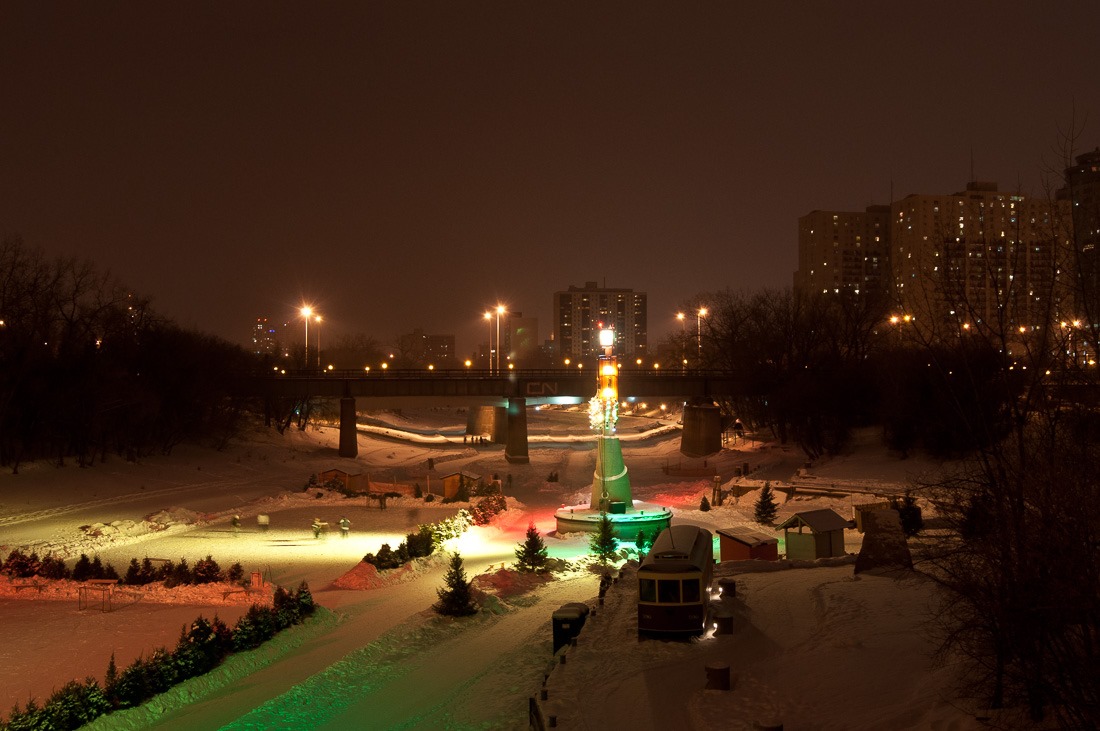 The Forks, Winnipeg is an easy target

Well, let’s face it. Even when most of my pictures are taken during daytime, some of my better shots are from around midnight. Night time is kind of magic for photography. Even when there is hardly anything visible, nothing to auto-focus on, hell, nothing to focus on at all, there is something there. Today’s cameras are perfectly capable of bringing that out and show it to the world, so I am willing to find that “empty darkness” and make something out of it. 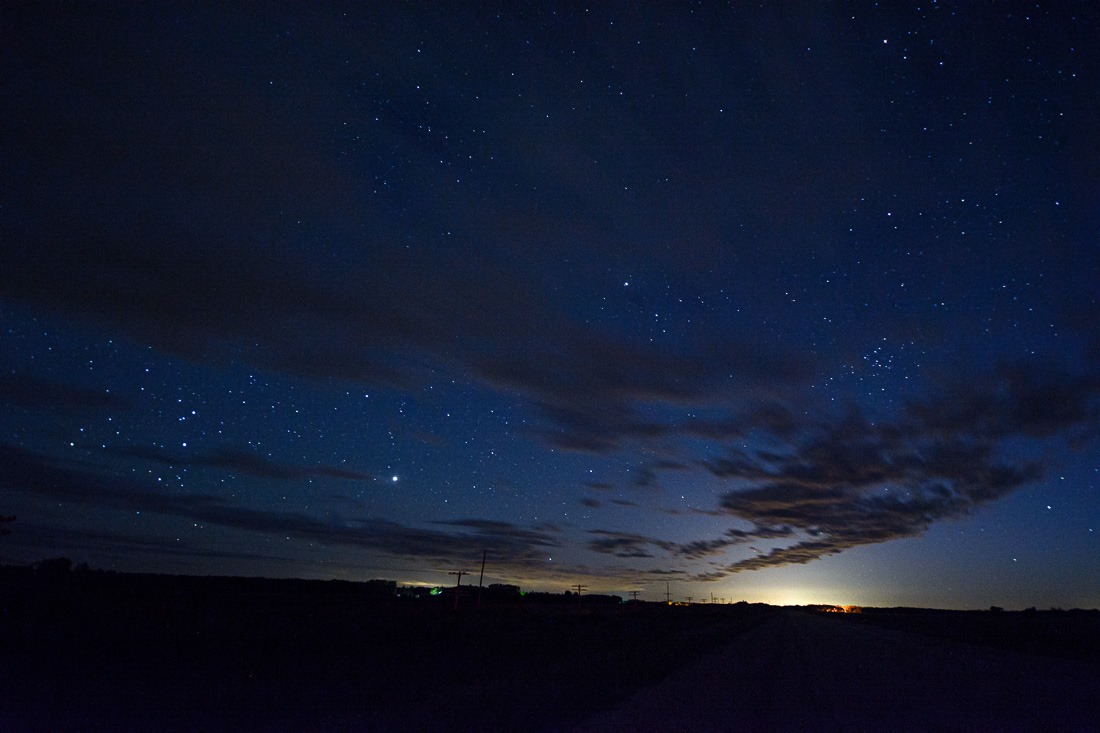 Take this shot of the night sky for example. While the picture shows plenty of detail, my eyes told me there was nothing. I couldn’t see the clouds and the light over the horizon was so faint it barely registered with my brain. When I saw the first trial on the back of my camera, there was way more detail than I imagined. So I took more shots to get something better

. In a way it reminded me of the space telescope Hubble being pointed at a seemingly empty patch of sky. And came up with thousands of previously undetected galaxies. 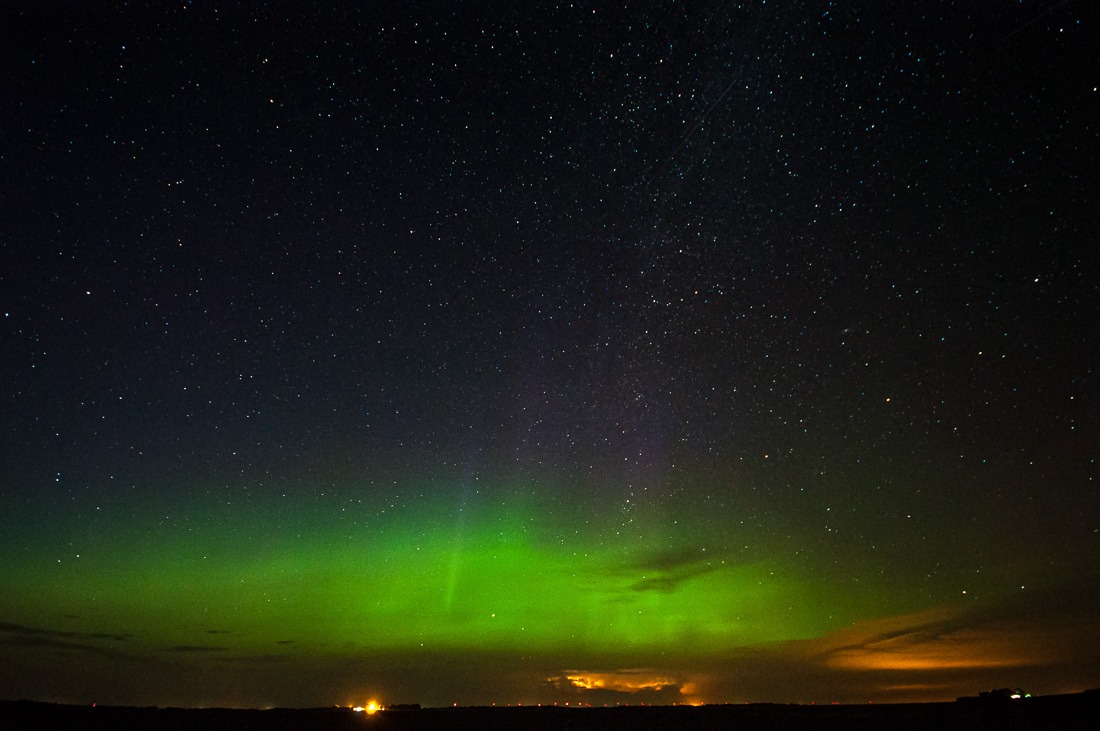 Not all nights are pitch black. Many have some light from moon, stars or aurora. The above shot was from an outing with friends, we had been looking for storms and had come up mostly empty-handed until that point. Then we spotted this thunderstorm far away on the horizon. Above it was a faint aurora. When we shot this scene, it was not apparent that there were also many stars above it. We were close to the US border and shot a storm over Dauphin. Eighty kilometers above ground was the aurora. After all, a nice shot to have. 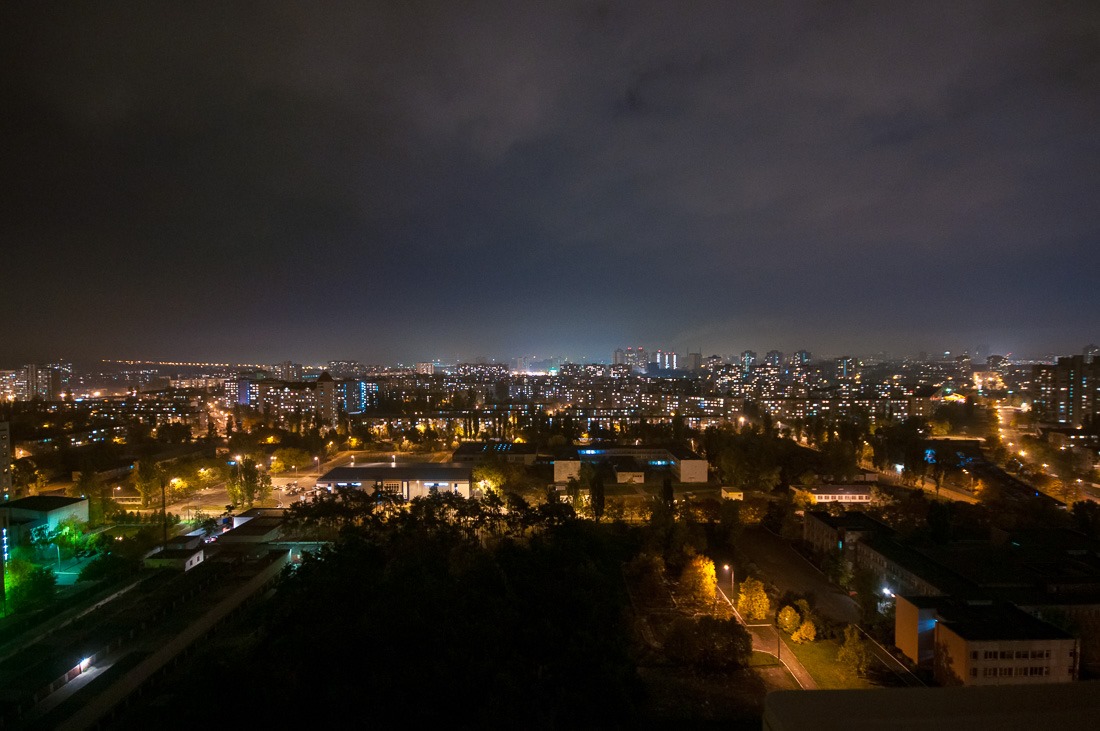 And then there are places where you never thought you would go to. This night shot over the city of Kyiv, Ukraine, from a private hi-rise. This time I had no tripod handy, but the windowsill was very stable. Building code in Ukraine is different than here, so we could open the windows from the 24th floor, enjoy a cool breeze and take some pictures. The only change to the picture is a colour correction to get some of the orange haze of the sodium lights out of the sky. 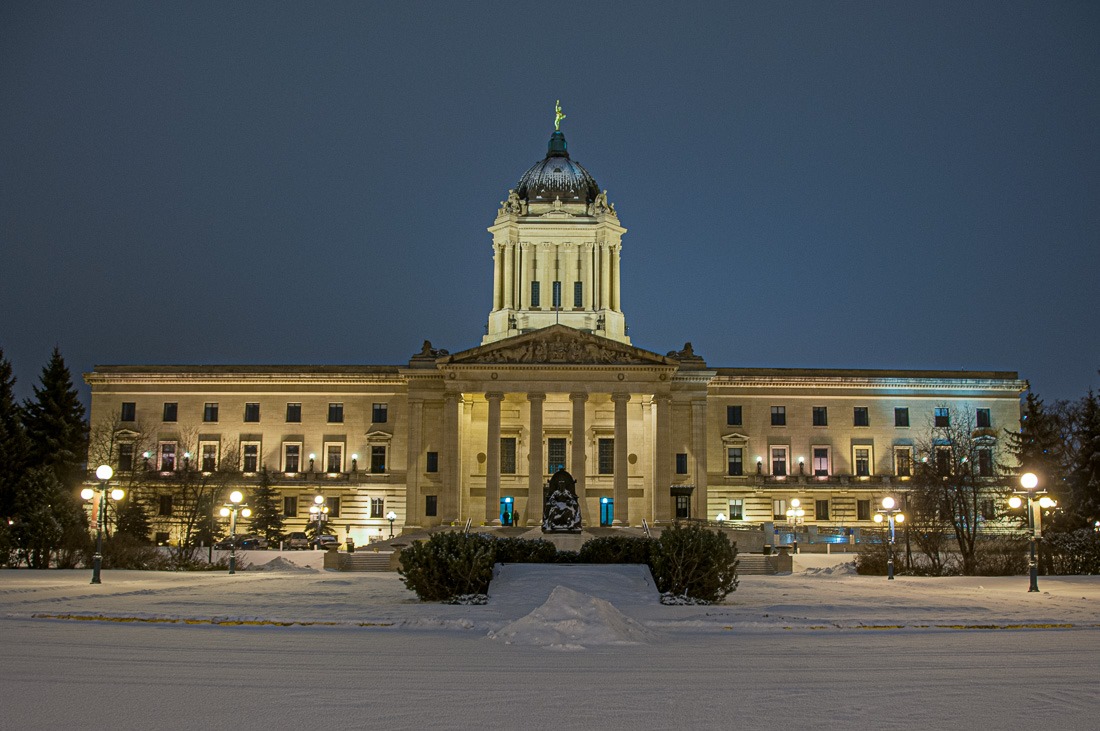 When we talk about a sodium haze, it’s orange, not purple

. Correcting that is sometimes easy. This shot from the Manitoba Legislature has snow in front of it. And snow is white. Adjusting the white balance on the snow is a matter of seconds and the picture looks way better. The key is to not remove all colour from the snow, as lights will cast a natural cone of coloured light. You don’t want that destroyed. 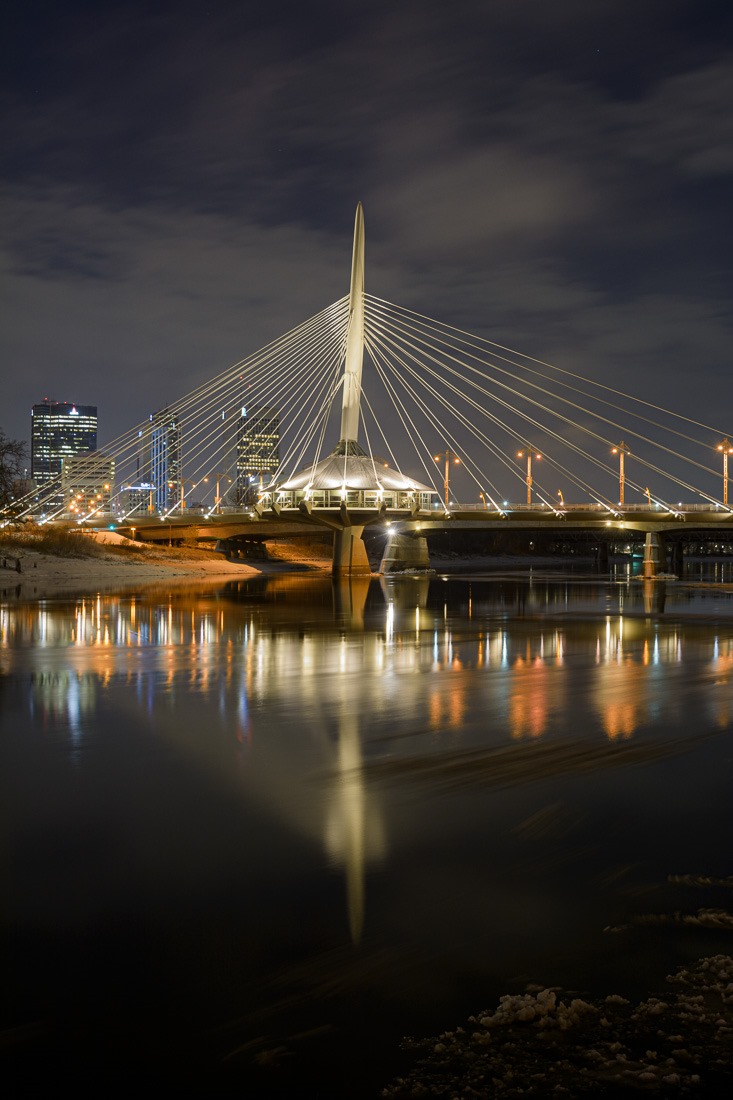 The same was done for this shot (among millions, I can assume) of the Provencher Bridge in Winnipeg. Most of the sodium colour cast was removed, leaving more natural colours to fill the frame. This shot was from November 2017, when the river was still liquid. Longer exposure times then allowed for a silky smooth appearance of the water. 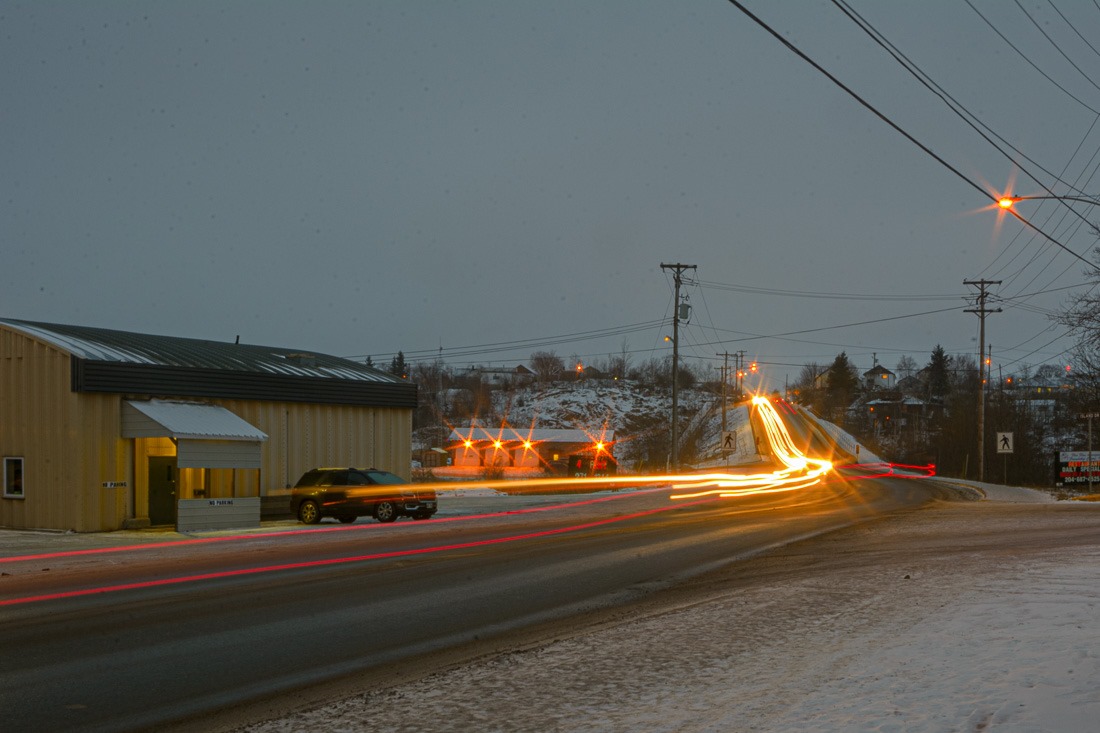 Even when the subject matter is kind of lacking, night shots can still yield some results. This shot from an overpass in the town of Flin Flon, Manitoba, for example. A friend and I had been looking for Great Grey Owls all day long and had found plenty of them to shoot. The evening, however, fell around 3:30pm in early December. That’s kinda early to go to bed. So we decided to kill the time by shooting some winter scenery. The light trails from the cars here were what caught my eye. In daytime, we would never even have stopped to take a picture of this corner, I’m pretty sure of that. 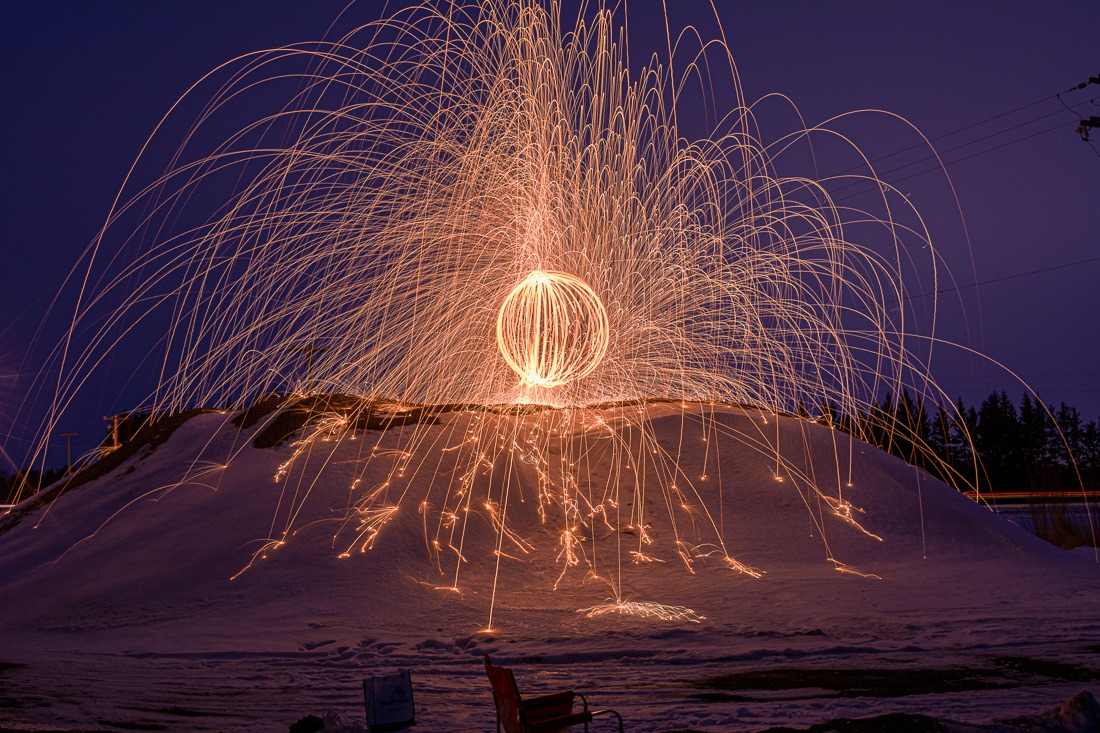 Sometimes you have to make your own subject, making sure that the surroundings are not interesting at all. Here, some friends and I decided to spin some sparking steel wool around and photograph the trails created. For this, the surrounding must not be interesting at all. Nor flammable. This is something one can do on the beach, standing in the water, or in winter, standing on snow. While the “light ball” is nice to see, what caught my eye for this picture were the “feet” the sparks made when they came in contact with the snow.

There is always something to shoot at night, as long as you can go out and shoot it. If the subject is man-made or natural makes no difference. The most important part is to get out and shoot.