One of the less visited parks in Manitoba is Duck Mountain Provincial Park. Yet it is a beautiful park, with lots of possibilities for fishing and stargazing. A few weeks ago I went there with a friend to spend a weekend far away from civilization. 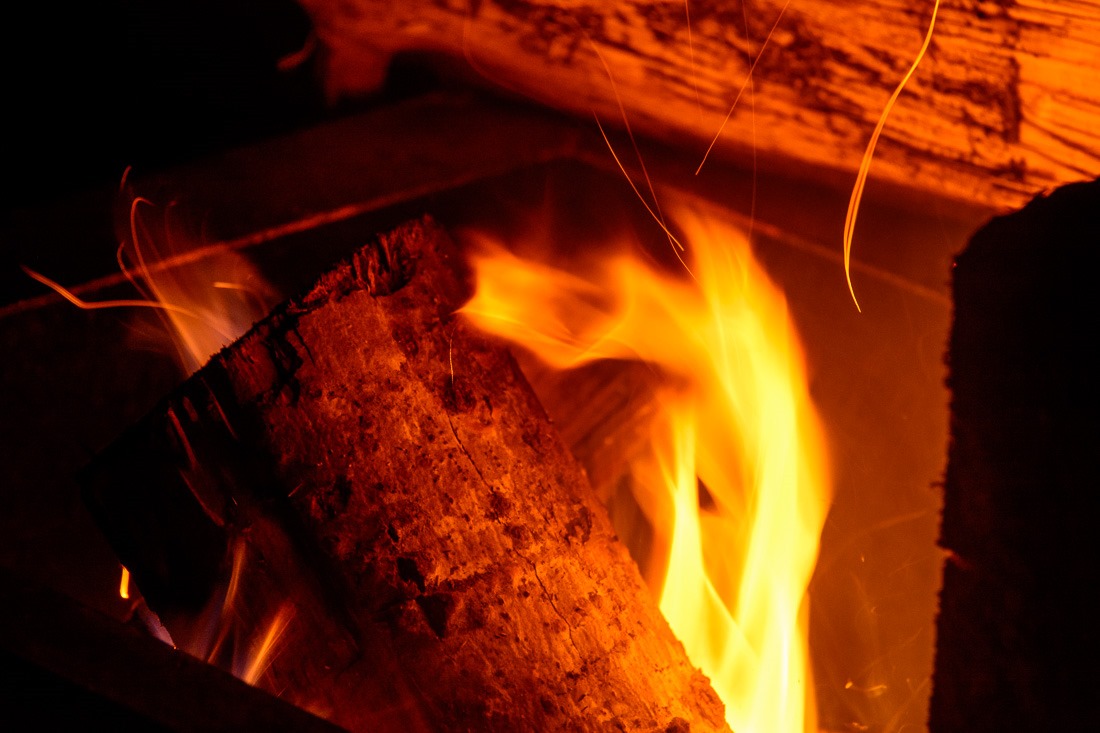 Well, as far away as you can call a campground far from civilization. The first evening was a bit of work…

We decided to give Google a chance to bring us to our campground. From Winnipeg up to 100km north of Dauphin over highway #10, Google did great. Then it proposed a short route, straight to the campground. It was around 9:30pm by then, we had left the city a bit late. So we decided to give in and let Google guide us through the woods to save some time. No fun pitching a tent in the dark, right? So we went over a fine deep-woods road for a few kilometers. Then we arrived at a crossing, with two bad roads, one dead end and one good road. We had arrived on the latter. 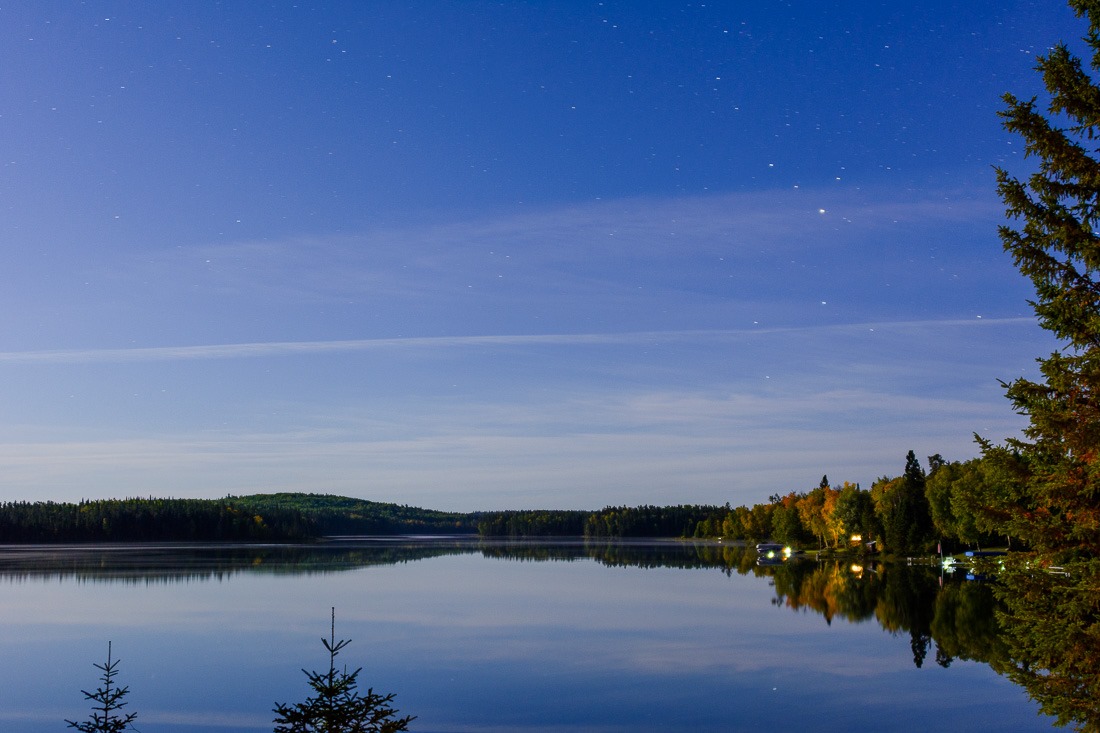 The worst of the roads was the one Google proposed. We decided to go back and make a 70km detour instead. By the time we arrived, the campground office was closed and it was pitch dark. At least to our eyes, it was. So we set up the tent by the light of our car’s headlights. The above shot was a long exposure of the view from our camping spot.

We woke up to a bright new day, full of sunshine and a +2C temperature. I was surprised to feel my toes. The wind came over the lake, straight into our tent, stealing the little warmth we had. A quick coffee and the warmth started to flow back into my body. 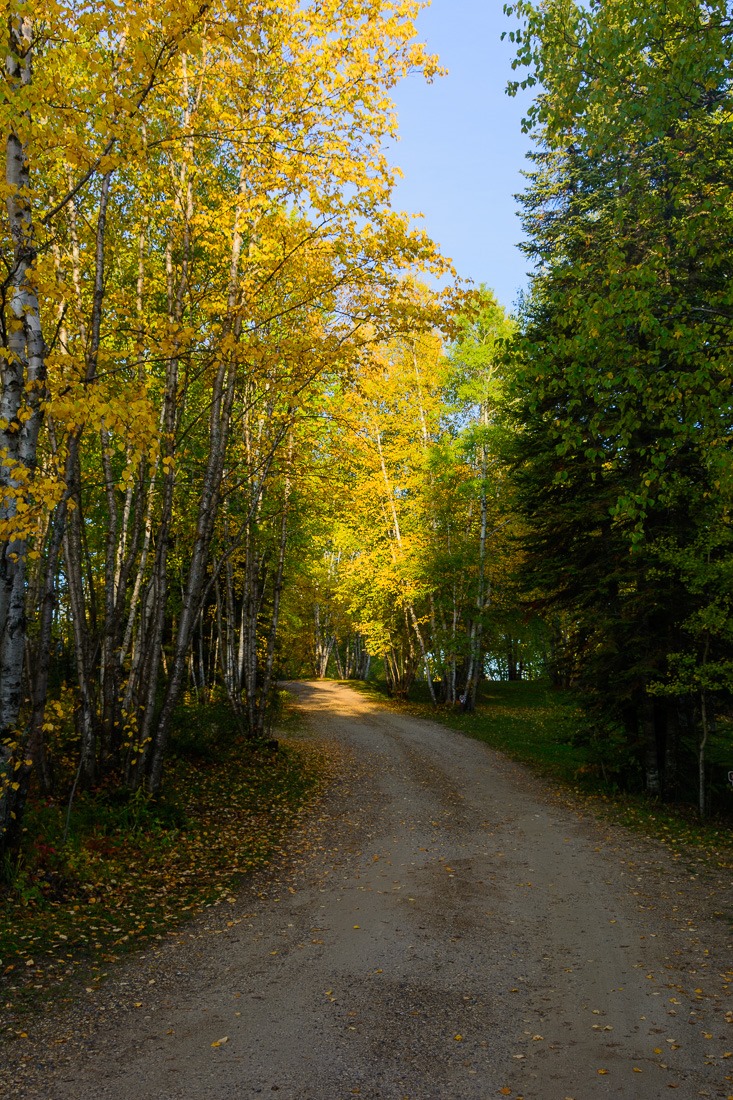 Then we decided to get our daily exercise and do a walk over the campground. Mainly to see if there were other spots with a similar view, but without the icy wind. We found spots, but by then the wind had subsided and we the need to move had passed

The campground manager had paid us a visit as well while we were away, so I went to see her in return. As it turned out, the tiny logger road were had snubbed the previous night had a bridge. The bridge had been washed away and the road was now a bog. Good thing that we do not always trust Google, eh? 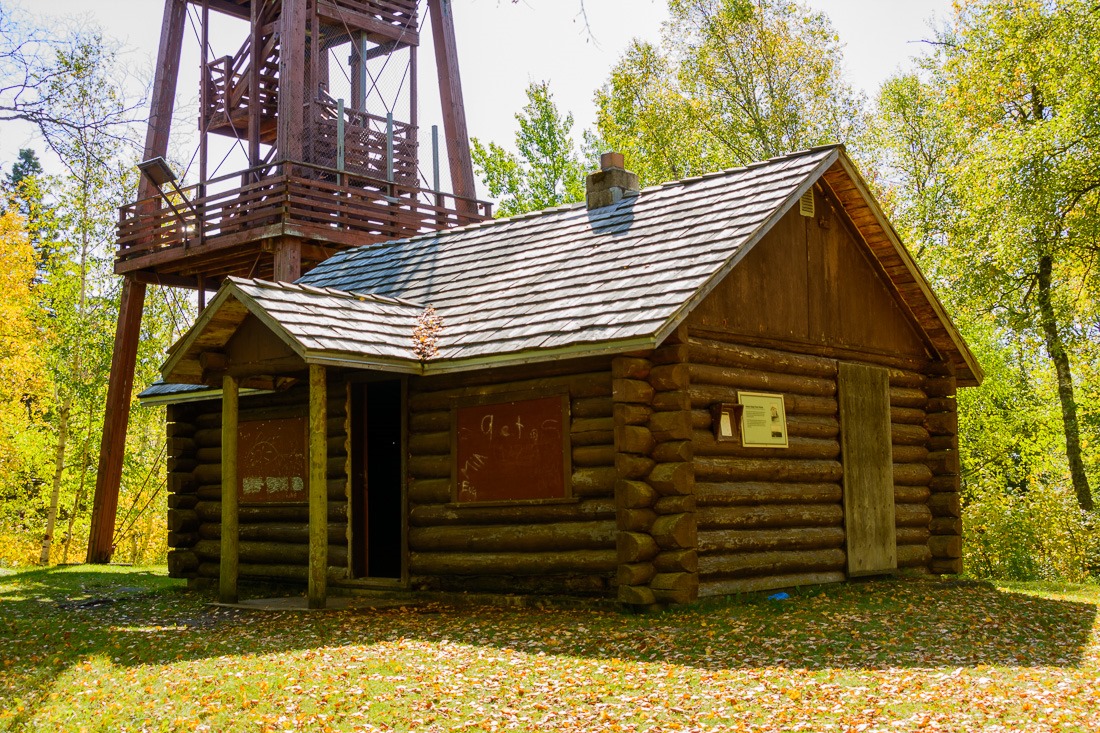 We then wanted to explore the park for as log as the weather looked good. It had warmed up quite a bit and the near-freezing temps of the night were forgotten. We went to the highest spot in Manitoba: Baldy Mountain. Yes, I can hear you! “Baldy on Baldy Mountain, LOL”. But I was there, and you were not! Na-na-na-ne-reuh!

. A look in the lookout hut told us that it had not been used in a long time. Not even by kids or exploring young adults. Dark and damp, that’s all it was. 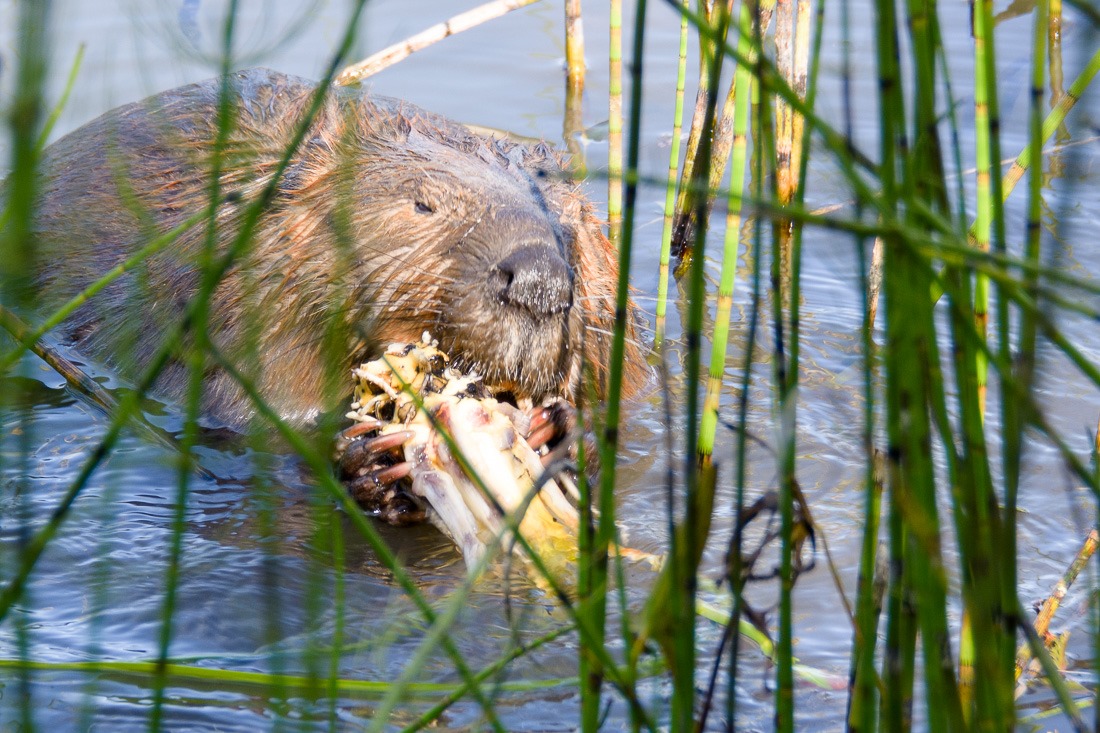 Either Ed or Willem Beaver, having a snack

On our way back, my friend wanted to do some fishing. Now, I’m not a fisherman, I can’t even catch the bait if my life depended on it. While he was casting his line, I heard something chomping away on something. After a careful approach, a closer look revealed a beaver chomping away on some tasty root. 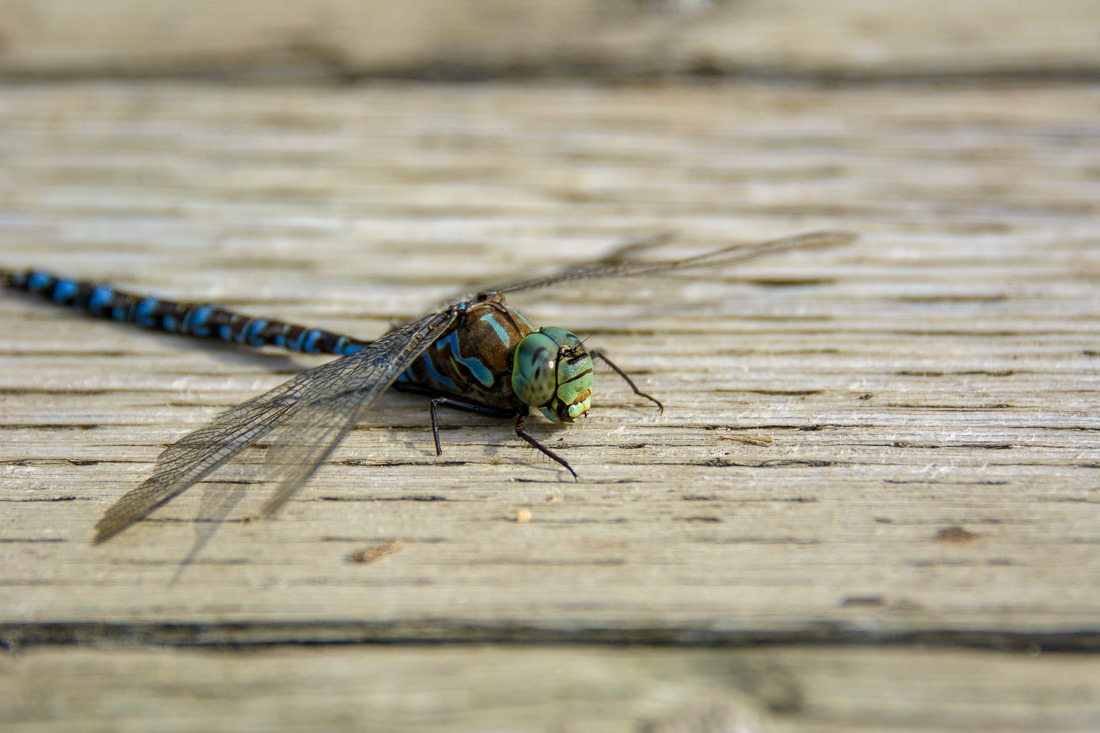 Three hundred shots later we moved to a different lake, my friend had had no luck. On the dock he was fishing off of, I spotted this Green Darner. It was resting on the warm boards. I got close to the ground, filling my pockets with water that flowed over the dock, but at least I got this shot. The amazing details of these insects would make for great 3D puzzles or construction games.

The next day, it was time to return to the city. But not without trying to find a small abandoned church I had shot a few years ago during winter. The Holy Eucharist Ukrainian Catholic church in Sclater, MB is for now a great subject to shoot. 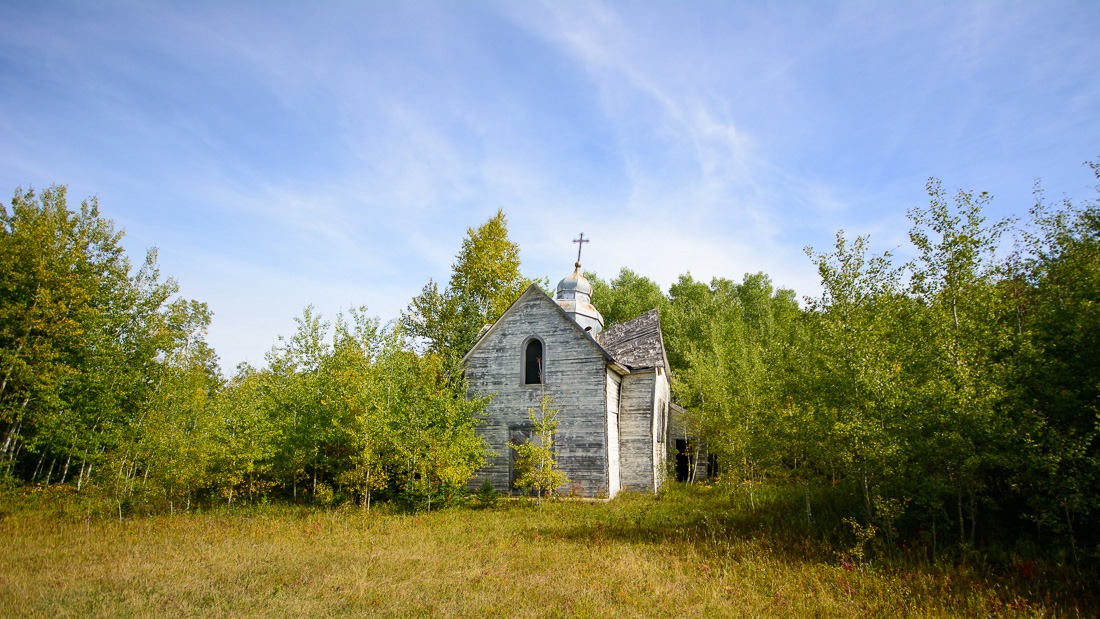 It is not clear for how long this church will remain upright. While the outside is only a little off-kilter, the inside tells a different story. The main entrance is blocked to anyone trying to get in the church. Th floor is not to be trusted and I had no idea if there was any substructure, like a basement or a crypt. Walking on the floor may have provided an answer, though. I was just not in the mood to find out. 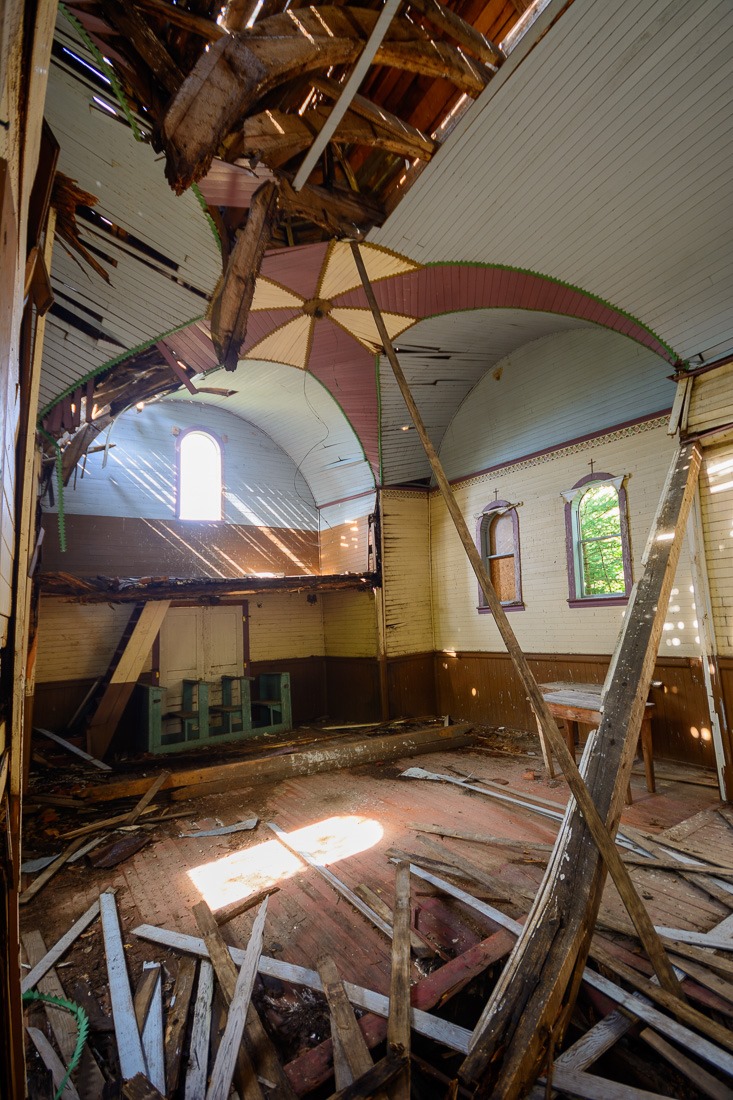 The main entrance was blocked with an old pew. You can still see the painted decorations along the ceiling, but everything else has been stripped from the church. It had been made with wonderful woodwork, but the main beam holding the building together had come down. One false move in the building and it could cause it to come crashing down altogether. At that point it would be a bad time to be inside. Prayers might have to be fast and to the point by then. No, I didn’t want to find out.