A story about toys, boy toys, techy toys, however you want to interpret this. The Austin Threshermen’s Reunion in Manitoba is an awesome place to be if you like steam engines and old motorized farm equipment. Last weekend I went with a friend to see this reunion for myself. I had heard of it before, but never really got the idea of going there. 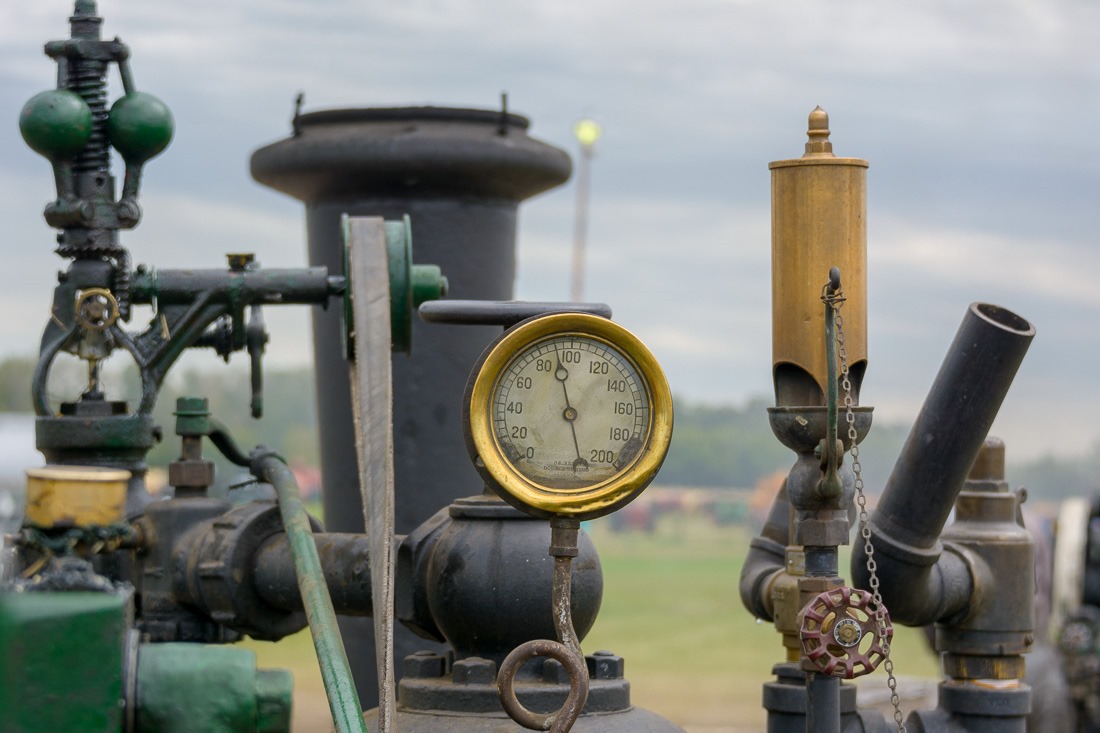 As it turned out, it was not in the town of Austin in the first place. Not a sign in sight to point us in the right direction. Until we came across a tiny sign on the side of the road, saying “65th Reunion”. We decided to follow that route as there was nothing else in the area to follow.

As it turned out, this was indeed the official sign. Difficult to read even with my glasses on. But the principal point was that we found the reunion. The entrance didn’t show us much of what was going on behind the doors. The first glimpse was of toy salesmen and saleswomen and a few old Fords from the 1930s. So we got our tickets to get in and looked around. Nothing. A woman in a golf cart offered us a ride and we accepted. Usually, I don’t accept rides from strangers, but since this was only a golf cart, what could go wrong? 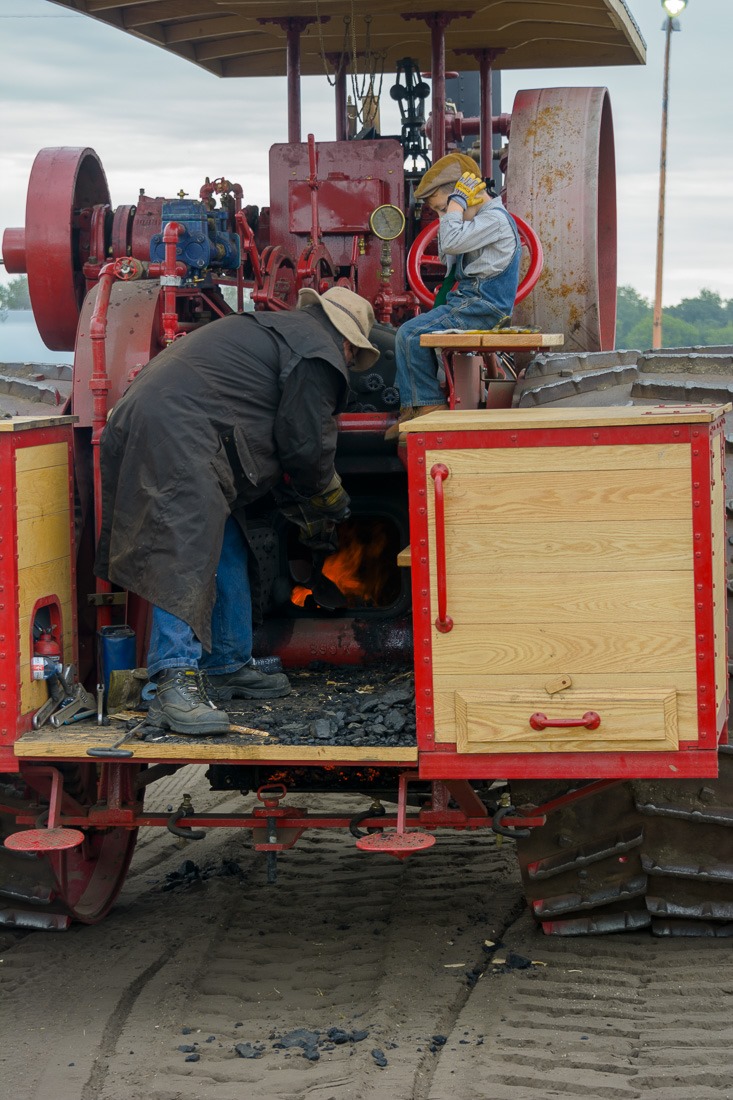 Pulling the choke, I guess

After a few minutes, we arrived in a huge field, filled with my favourite engines.

As a kid, I tried to get my parents to get me one of these. But they always told me there was really nothing I could do with it and it would be a waste of good money. Money was not abundant in my family. Wasting it on something frivolous like this was unthinkable. And yet, here I was, in the middle of my favourite engines. Albeit in a bigger format. A much bigger format. If I had been the kid in the picture above, I would have been in heaven, even if the temperatures of that thing would indicate something opposite of heaven… 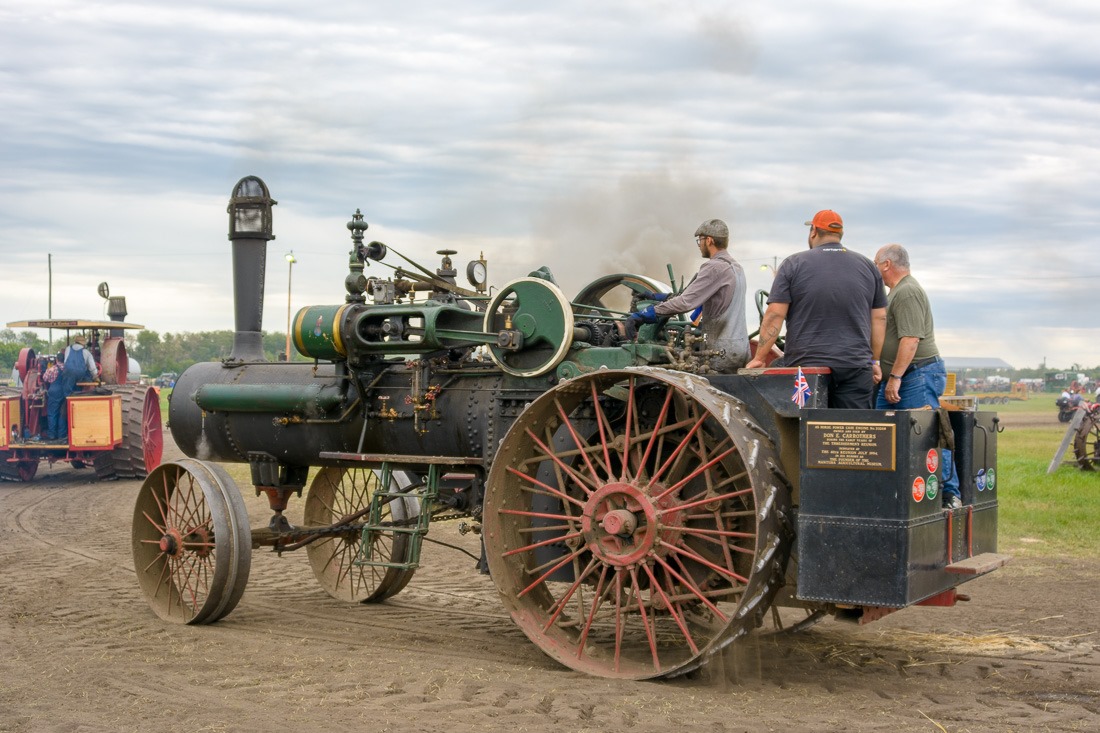 There were even machinists that offered rides on their machines. I even had the offer of driving it but had no place to put my camera, so I passed. I was also wearing fairly clean clothes and nothing, but absolutely nothing is clean with these monsters. So I was a passenger for a whopping 30 meters. In front of us, one of the other machines broke down and jammed the way for the rest of us. 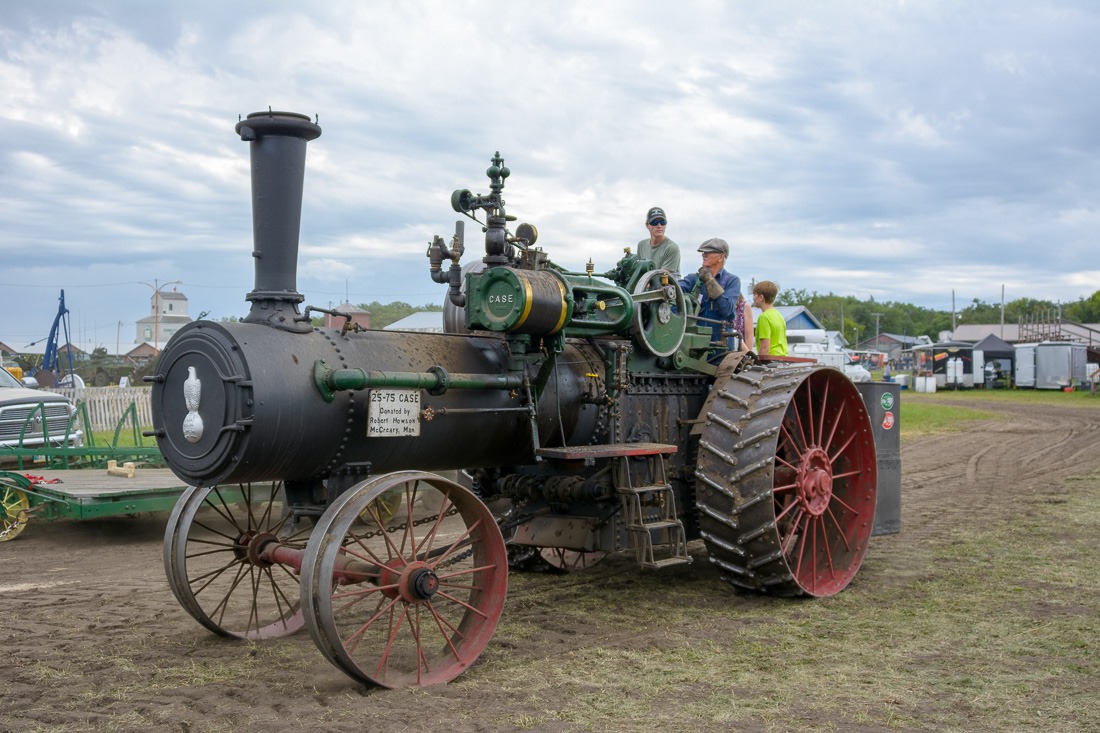 So I got to talk a bit with the owner about his machine and some of the others. As it turned out, most of the machines presented this day were wood-burning machines. Cleaner than coal, but also not as powerful. The above picture is of the machine I had been a passenger on. As it turned out, this machine dated from 1913 and had mostly original parts. Some of them had been recreated and re-engineered. 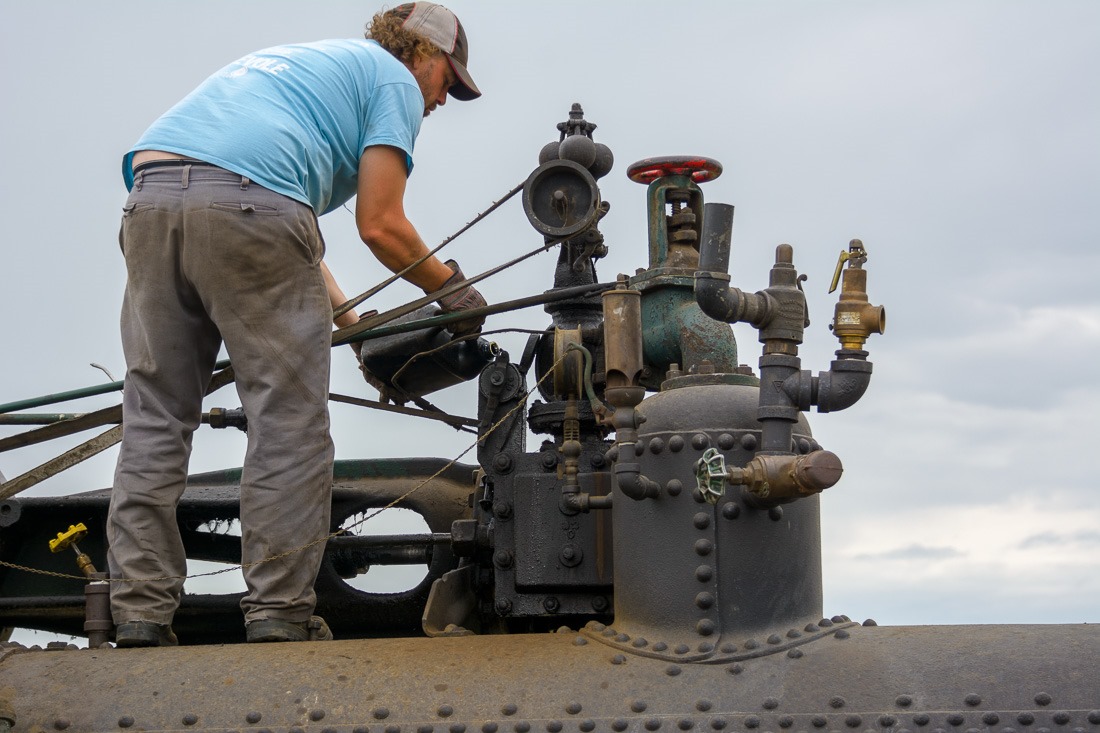 So when I asked where they recreated those parts, the answer was kind of surprising. They recreate the part on a 3D printer, see if it fits properly and then send off the 3D file to a manufacturer in China, who will then ship a real part back to them. As for the reliability of the parts, I only got a half-answer, I think the reliability is not one that stands the test of time like the rest of the machines. 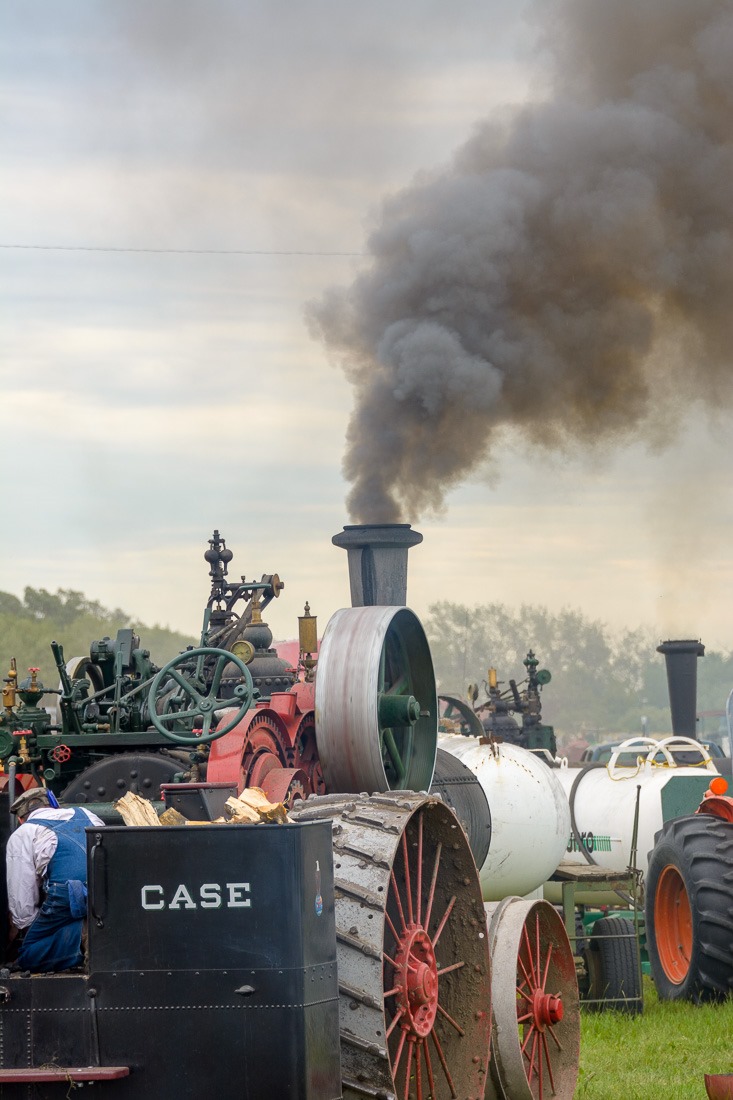 Some of the machines ran on coal instead of wood. To find which ones did was really easy. When I arrived at first, I thought my lens was dirty and I would have all hazy shots throughout the day. I usually refuse to touch my lenses in the field. Then I checked my lens and saw a few spots. That could not have caused my shots to be hazy. The culprit is in the above shot. As it turns out, they start up the engine with coal, as it burns hotter, then switch to wood as the smell of burnt coal is somewhat antisocial in events like these. 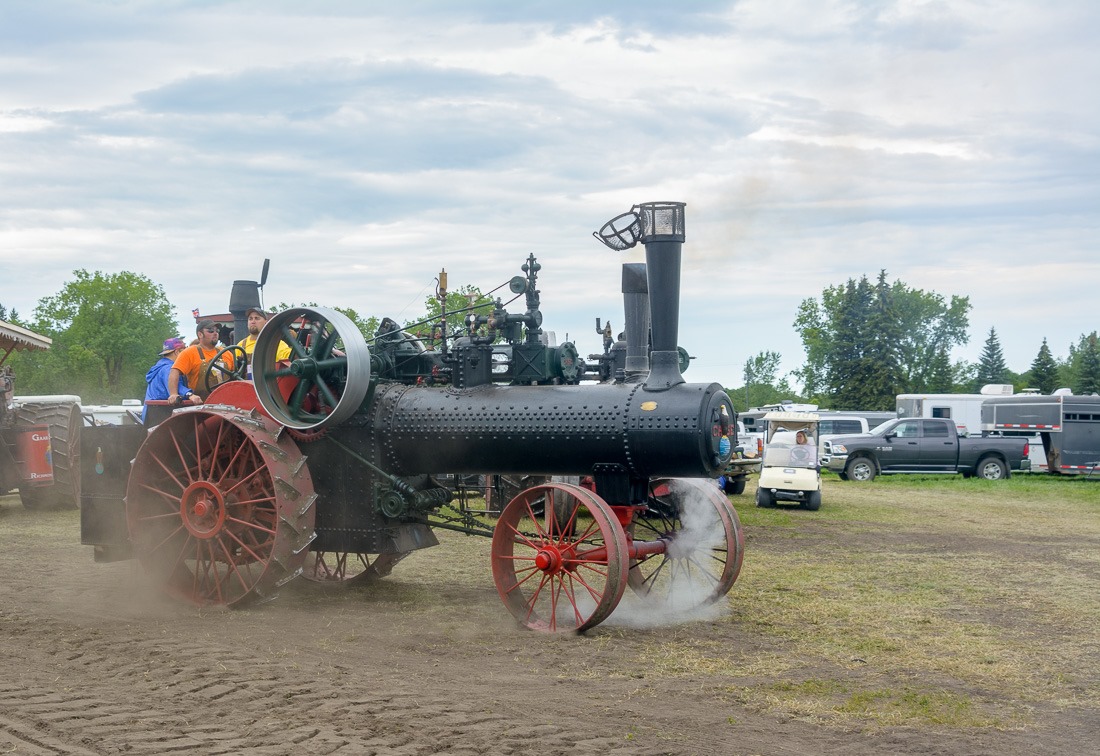 I still smelled it hours later after I got home

. The above machine seemed to be steaming from all sides. It had blown a gasket in the races of the previous days. Yet it still worked and was still participating in the rest of the events. Talk about reliability. The machines were all immense. Like 3 times my height, let’s not compare weight, ok? 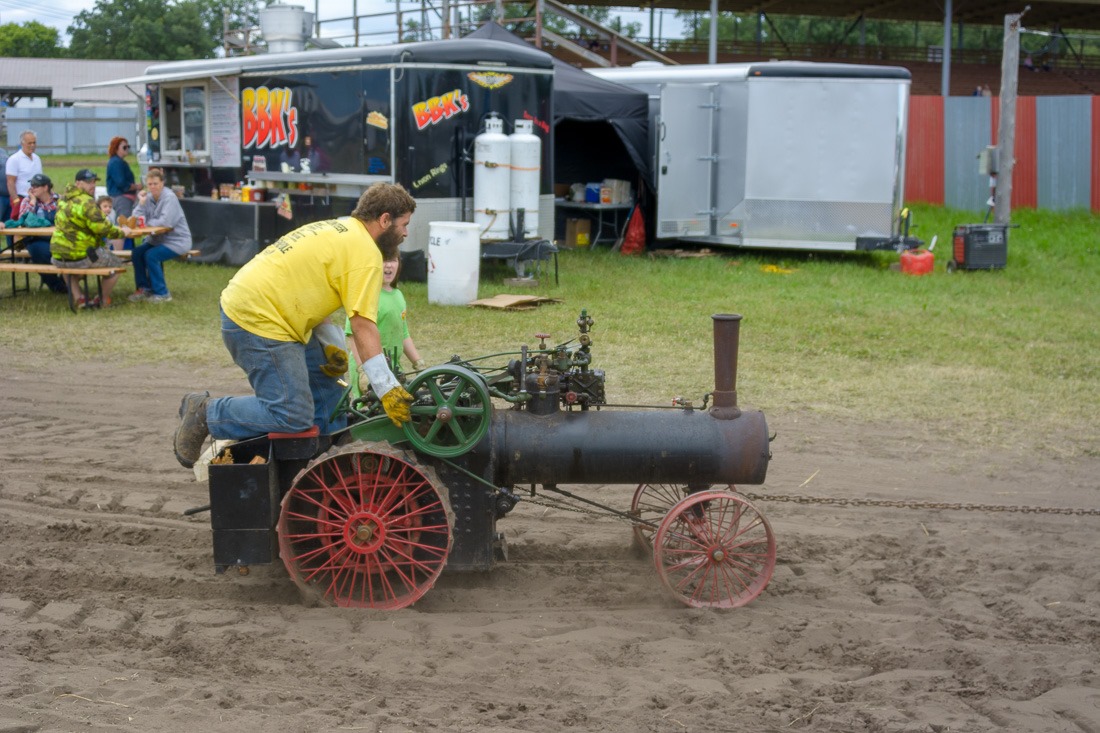 But the adults were not the only ones having fun with the steam engines. However, for kids, the dimensions needed some adjustments. The girl in this picture was ecstatic about riding “her” steam engine. Since I have no permission to show her face here, I chose a more anonymous from my set. But even if she is not recognizable, the expression on her face speaks volumes. 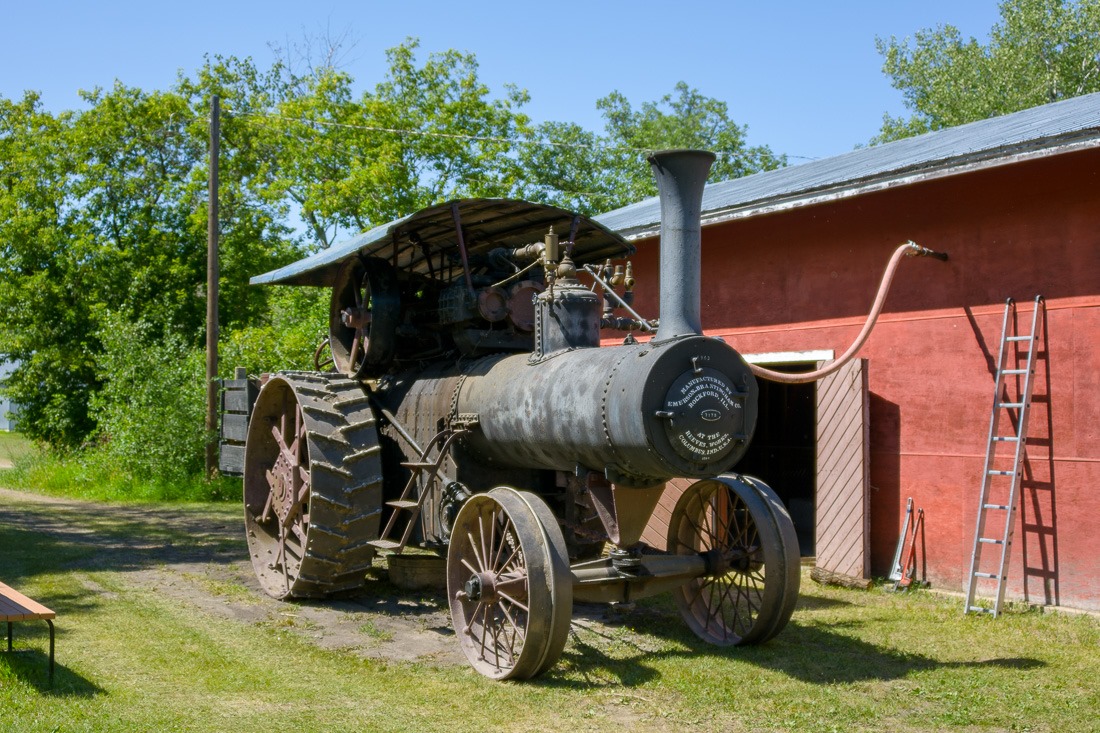 After a long parade of all the equipment, we decided to walk around a bit and found one machine that was in need of some refreshment. It was being filled with water. The day was one of power, but not one of speed. The tractors on display and in the events here have a general top speed of around 4km per hour. No wonder they could let anyone try and drive them

One thing is for sure, next year I will be going back to this festival, but probably a few days longer.