Tempus Fugit. Like a real fugitive. The last time in New York City is already five years ago. As if it were yesterday. Back in 2011, I was invited to give a seminar about the programming of a shopping cart in a popular CMS. 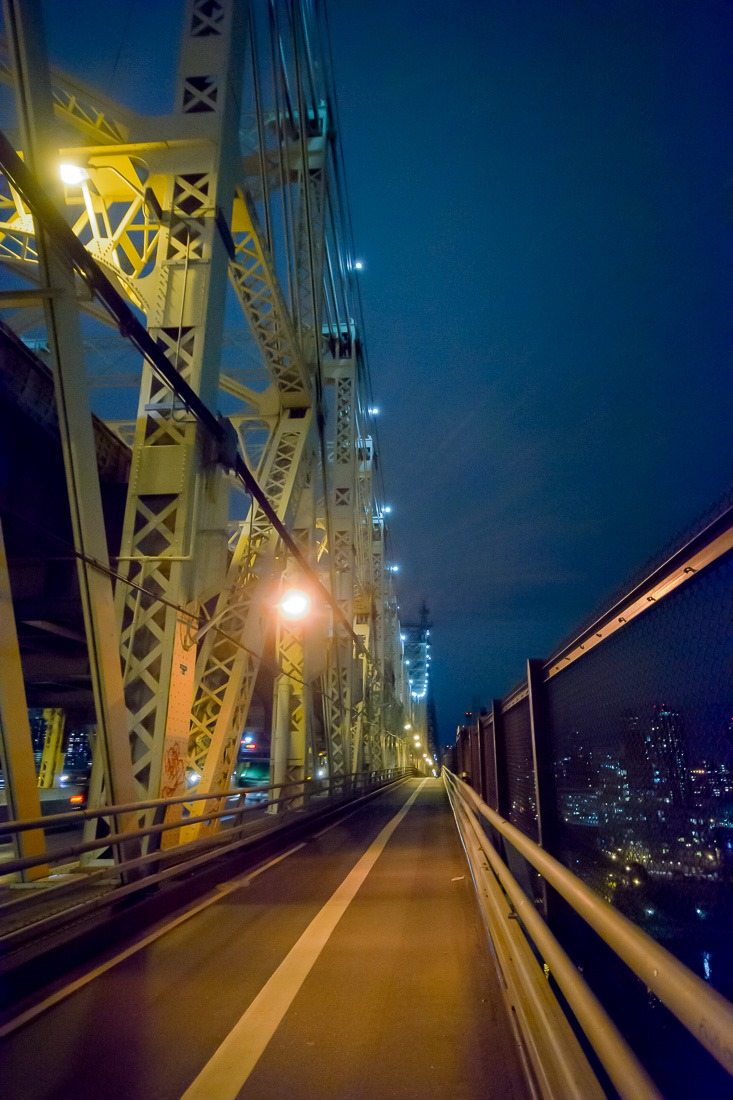 It meant to me that I had to go to New York City. I know that millions of people live there and have no issues with it, for me, coming from a small town in Europe, this was a big undertaking. Mostly about deciding what kind of socks I should take.


Once I arrived in that big jungle of metal and glass, it felt as if I was home. Never had I thought that this supposedly stressful environment would be so easy to get along with. Granted, I did not go out with NYPD or even NYFD, I was only a tourist on a mission. The mission of showing some highly skilled programmers how to create a simple shopping cart in their favourite CMS. 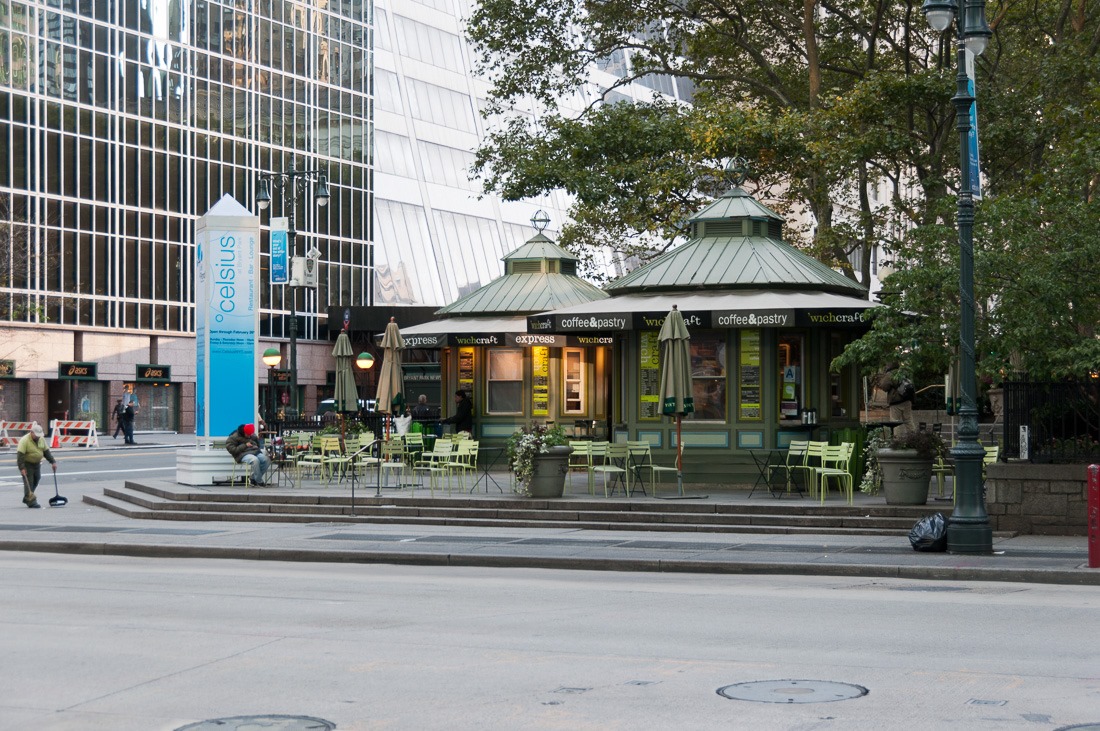 Once that was done, I had plenty of time to move around and enjoy the sights of this mighty city. A city that might not be as advanced as we all think

. In the above picture, they seem to be selling or providing “witchcraft”? I thought that had gone out of style a few centuries ago. 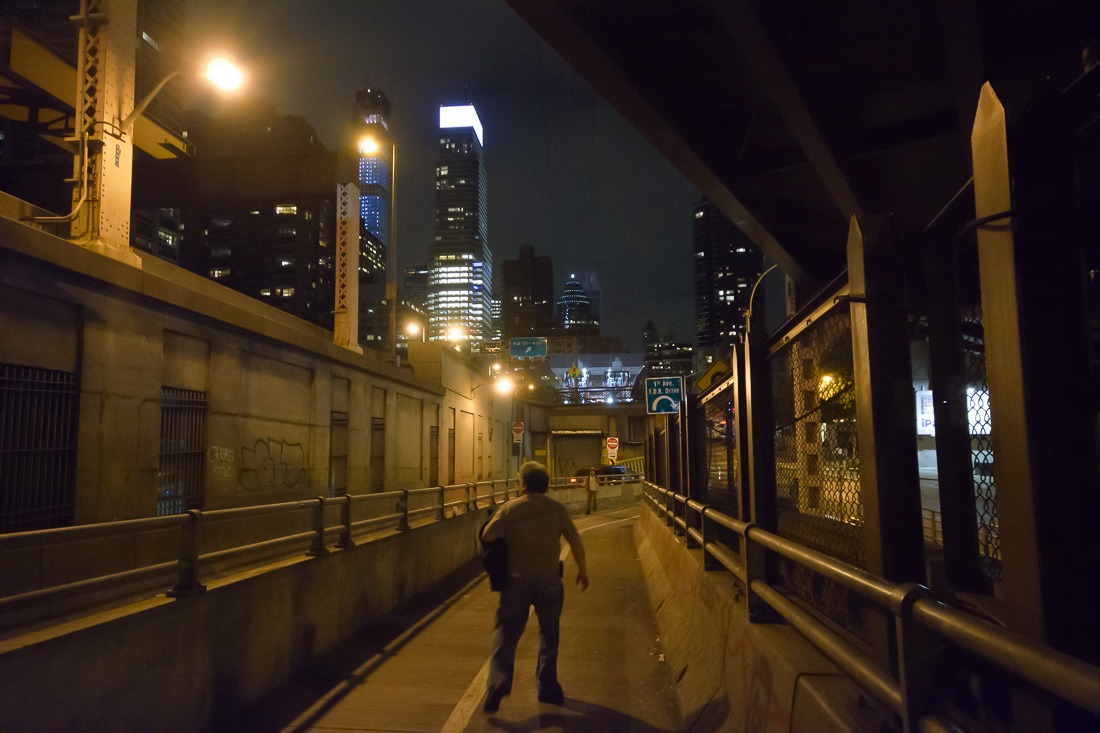 Going to a place for the first time is always an adventure. However, having a friend that knows the place inside and out is a big plus. Here is the said friend, thinking that I was just a step behind him. I thought I was always a fairly fast walker, but over there they really move like lightning. Sometimes it’s hard to keep up with them. 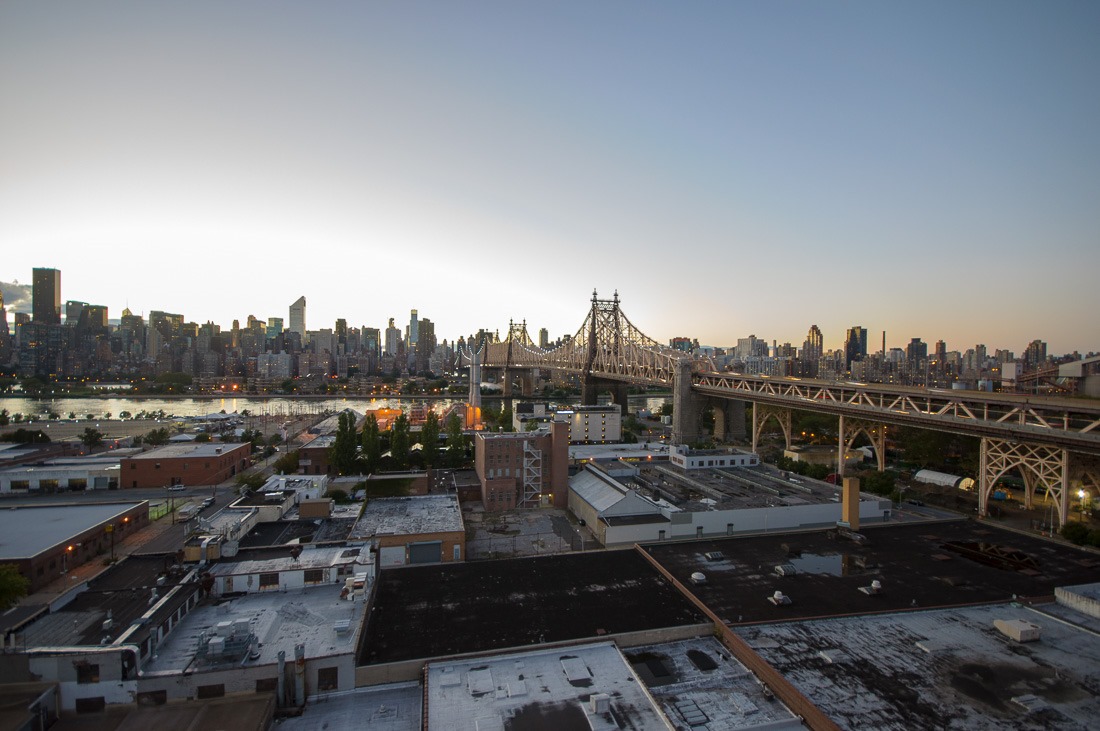 Going up some buildings where you can safely use a tripod is another matter. While New York is very pet-friendly, it is certainly not tripod friendly. Therefore the higher buildings like the Chrysler Building or even the Empire State Building were a no go for me. A little lower and the owners let me up on the roof to shoot as much as I wanted. This is a shot of Manhattan, just outside Manhattan. 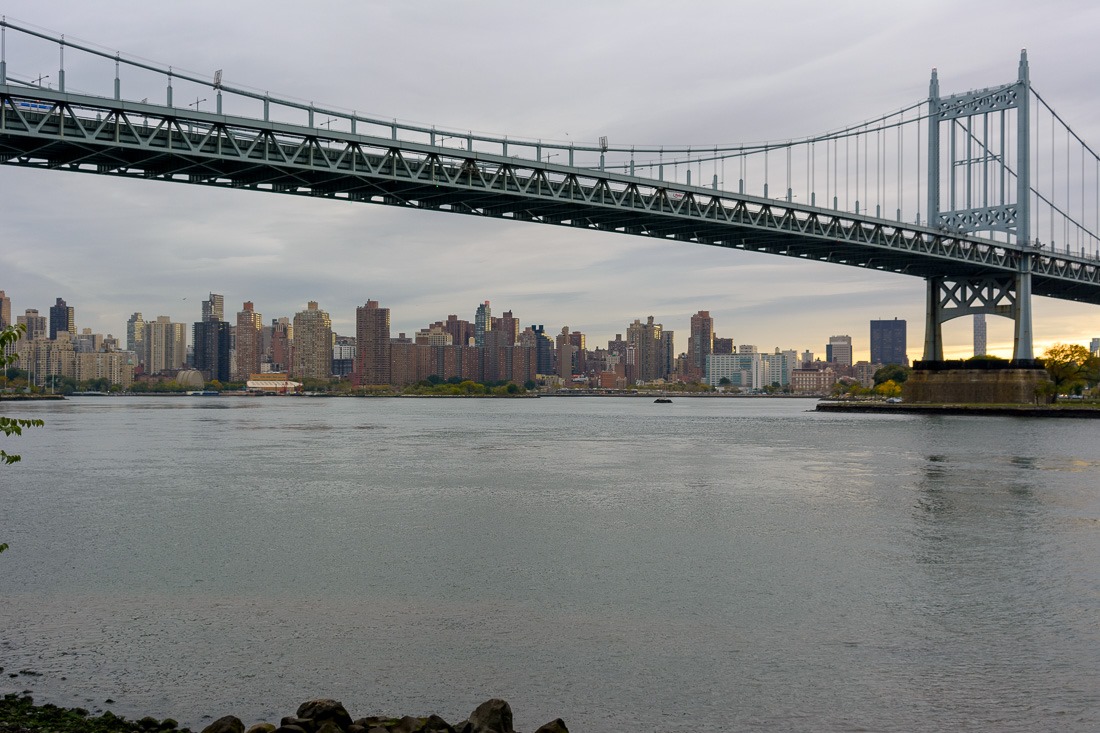 Who speaks of New York, speaks of bridges. Some of them are famous, others not so much like the Robert F. Kennedy Bridge in this picture. This bridge spans a waterway that’s aptly named Hell’s Gate. Water from the ocean will come back in here at high tide, creating deadly currents for any type of ship. We all know that the Titanic never made it to New York, but a few years before that disaster, an event just as deadly happened here. In 1904, the Steamboat “General Slocum” caught fire here with 1300 people on board, including many children. In the course of 20 minutes, an estimated 1021 people died. Prior to September 11, 2001, the burning of the General Slocum had the highest death toll of any disaster in New York City. 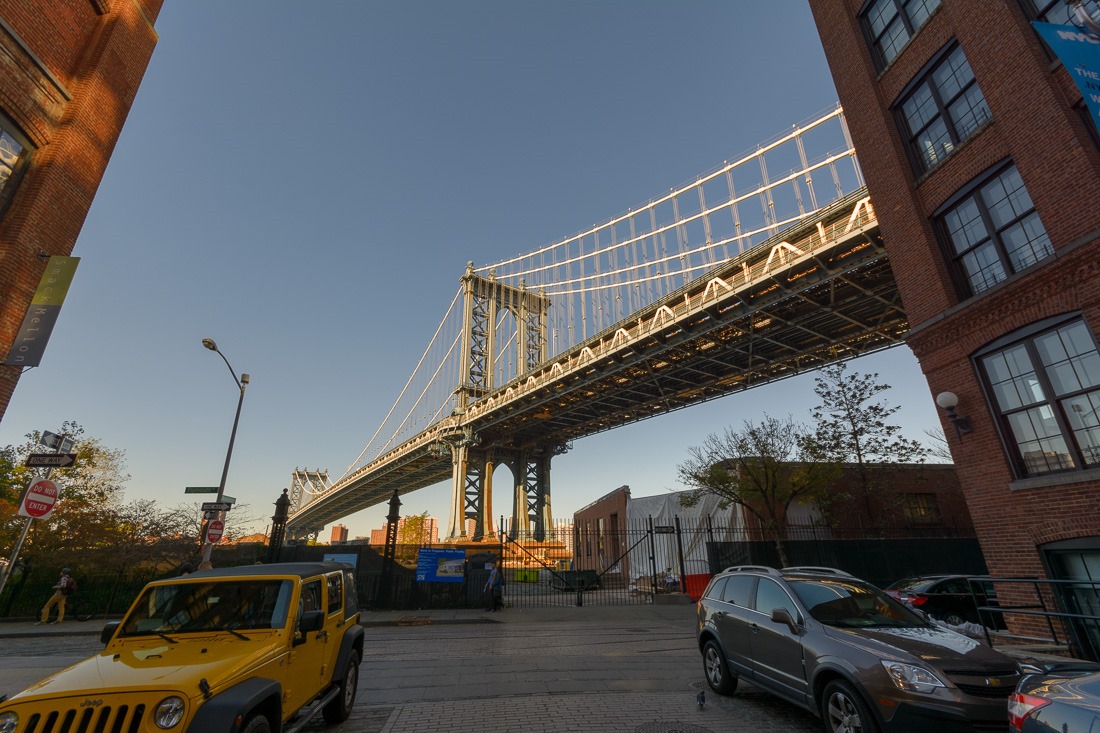 Other bridges are just famous, no disaster required, like the Manhattan Bridge. The view on this bridge from a small street nearby is world famous and has been featured in many films. Obviously, before filming, the management of the production gets the area closed off and free of any vehicles or stray people. I didn’t have that power. 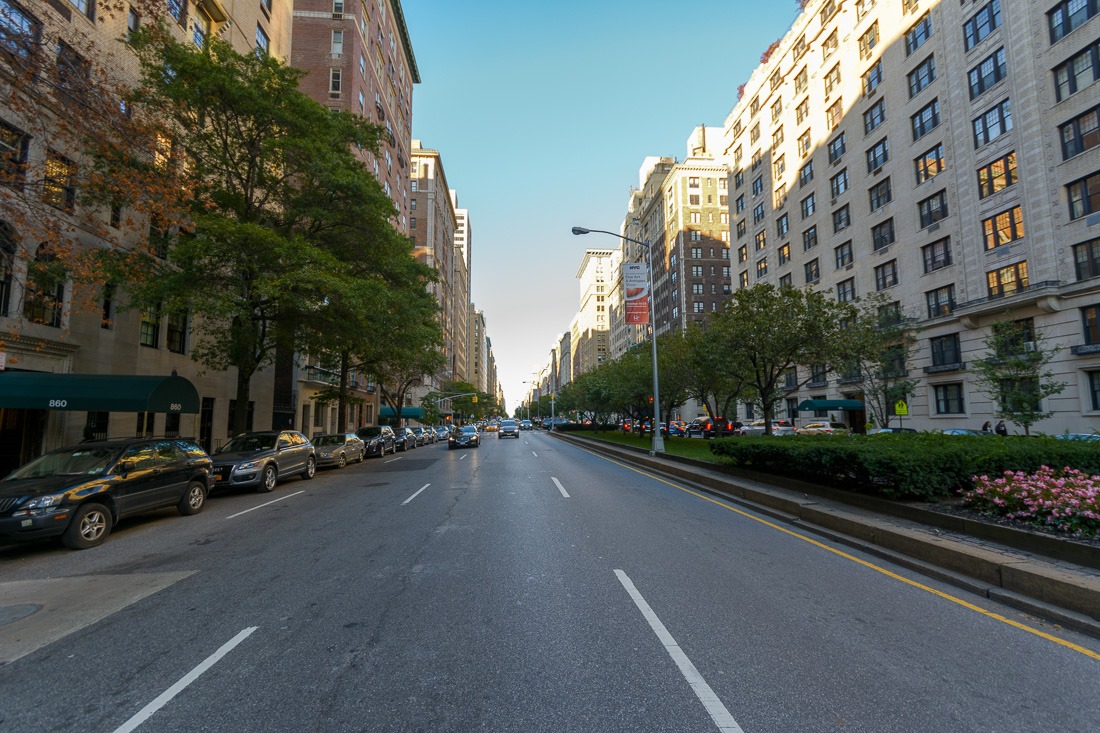 Park Avenue is always a nice place to walk, although it’s even better to find a nice place to eat when one is hungry. The above shot is kind of “from the hip” as there was no time to stop in the middle of traffic to compose and take the shot. Talk about a rush job… 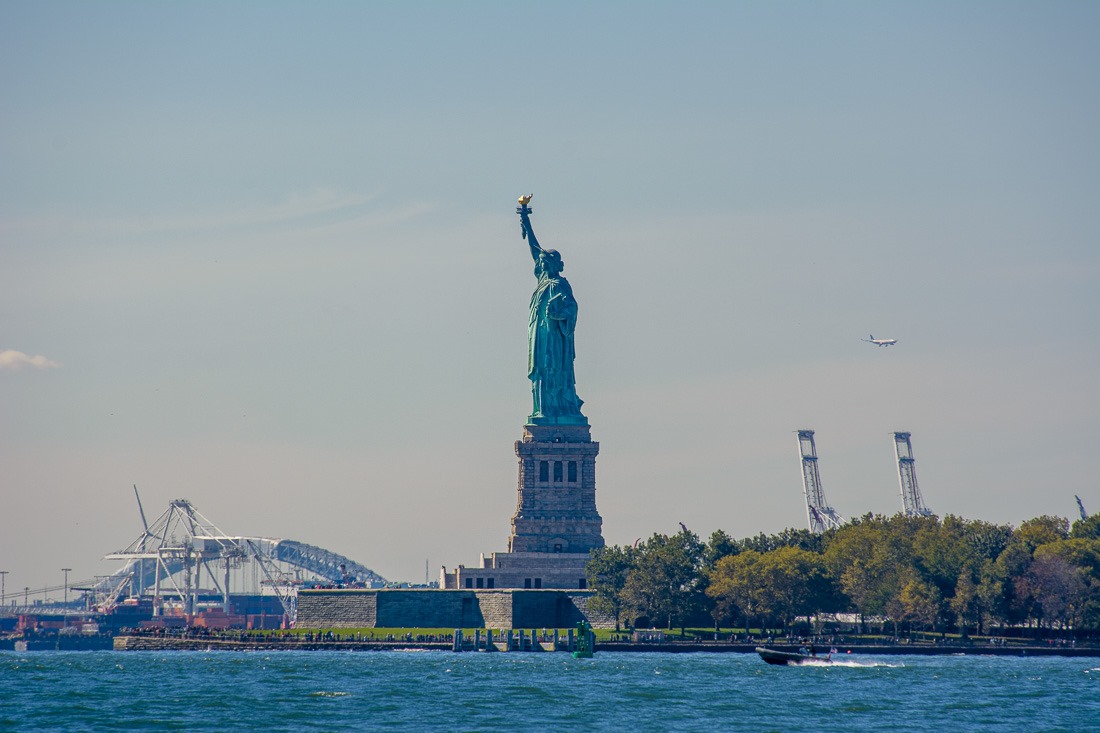 When you go to New York, a certain number of landmarks are on the bucket list. The Statue of Liberty, the Staten Island Ferry and of course Grand Central Terminal. While I was willing to wait for a ticket to go and see the Statue of Liberty up close, I was not willing to stand in line for 5 hours to get to the ticket booth. As a result, I got to see the statue from the mainland and never got close enough to touch it or even to ascend into the flame of freedom. 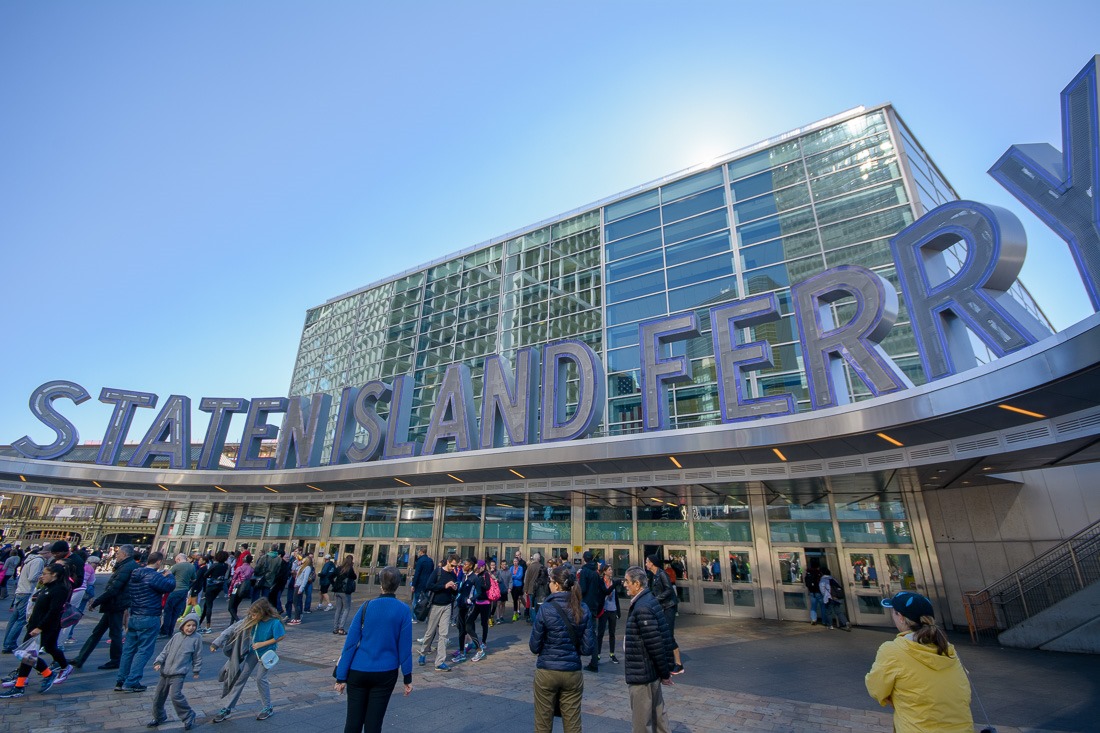 The Staten Island Ferry carries thousands of people over the water every day. For me, the view of the terminal was enough. I had no intention to mingle with that many people on a small ferry boat

. Or perhaps it was too late in the day to make a full trip across the Hudson River, I don’t remember 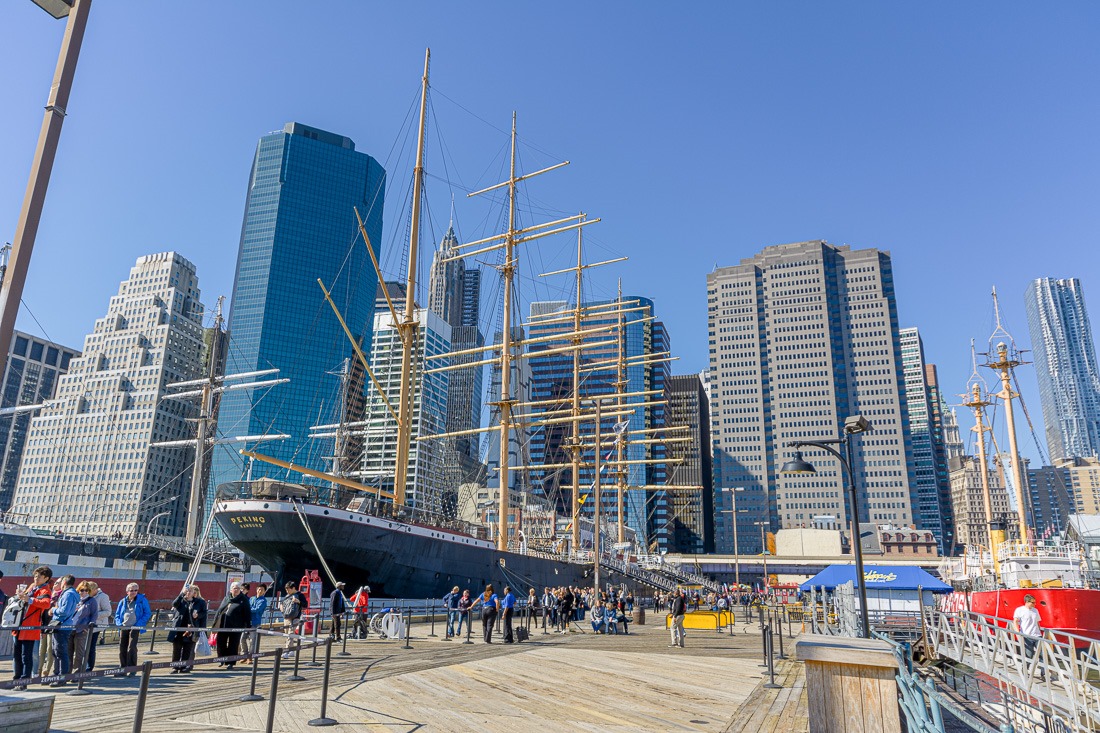 If you are into Tall Ships, Pier 16 houses the Peking, registered in Hamburg. I believe they transformed the ship into a restaurant of some kind. At any rate, it is kind of weird to see this age-old ship against the background of the most modern buildings in the world. A very interesting combo, if you ask me. 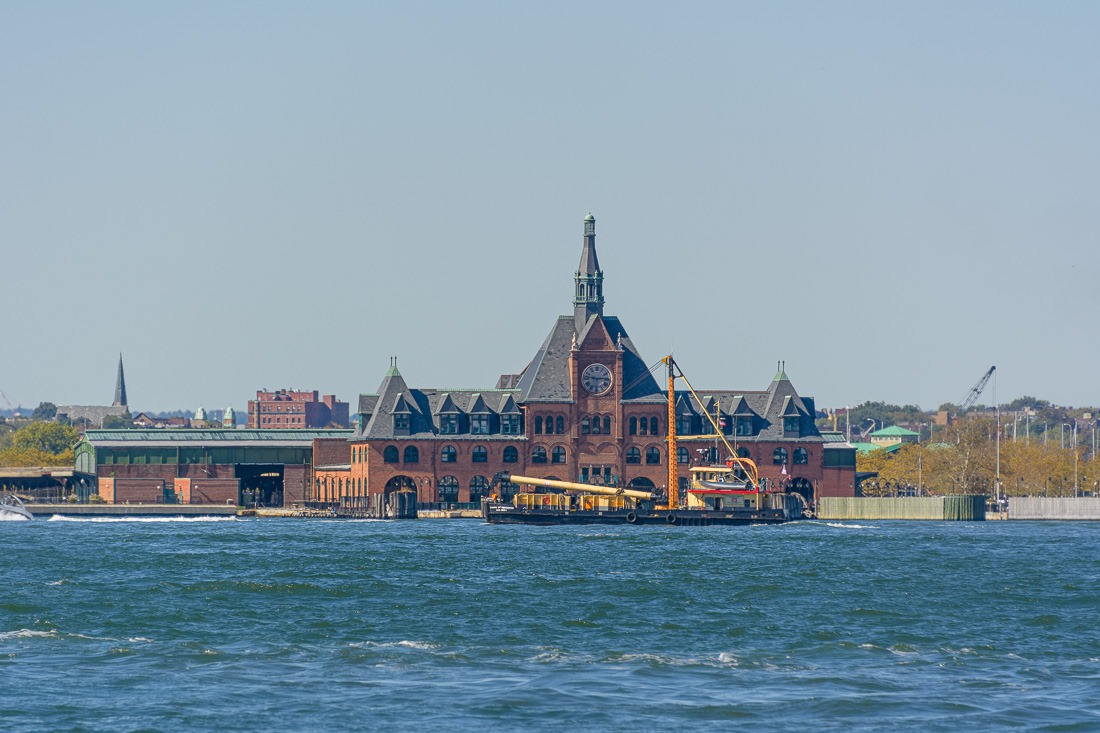 Turning around and backtracking a bit, I nearly forgot the point of entry to the United States of America for millions of people. Ellis Island, where the decision was made if you could enter the New World or not. Some people never made it out of there, too sick from the journey over the ocean to ever be admitted to the promised land. Today, Ellis Island no longer serves as an entry point to the United States, you can get in at any of the hundreds of ports of entry. 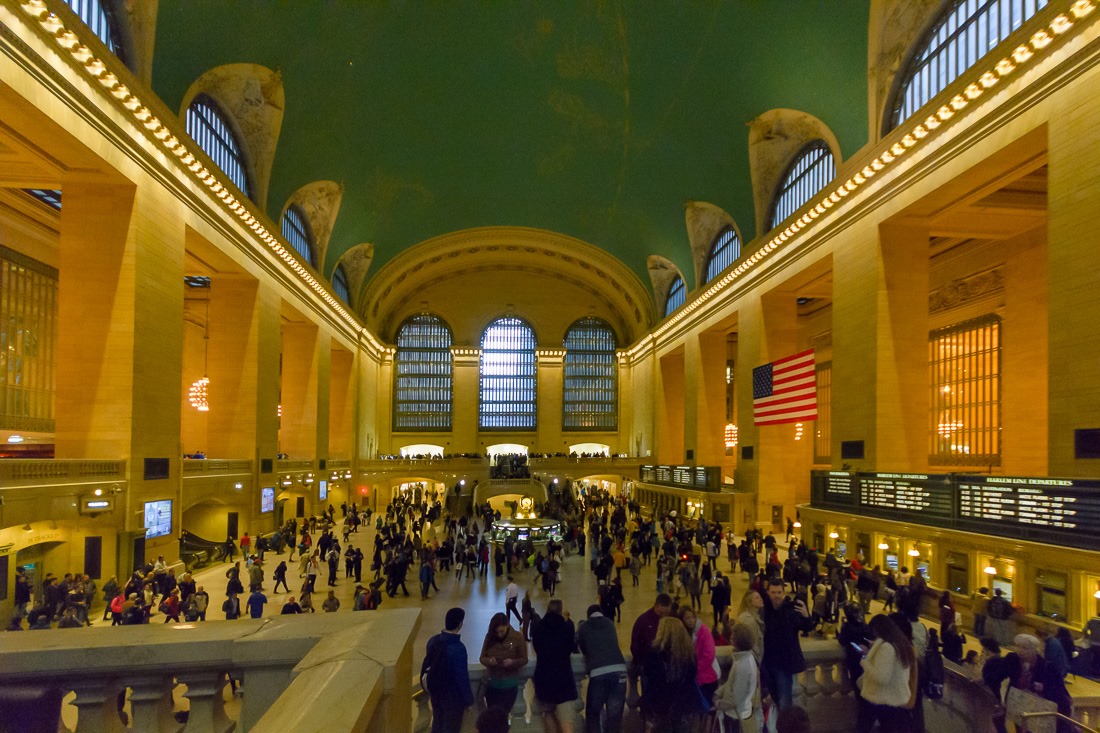 By the end of the day, it was time to go back home, making use of the subway. One stop was still on my list at that point: Grand Central Terminal. Many films have had one or more scenes in this place and I wanted to see that for myself. Of course, the more “intimate” scenes were not shot here, but just enough to make believe. Holding my camera still in here turned out to be the biggest challenge. Setting up a tripod in a place where everybody has to go somewhere and pass through the exact spot where I put my tripod was too much. Instead, I used natural spots like handrails and such.

One day I will go back to this place and enjoy it some more.