The world by night

Well, I haven’t been in all the world by night, but many places, yes. The saying is “Paris by night”, hmmm, no pictures of that time. Lived there for 12 years, but in the non-digital era of photography. Oh well, you’ll just have to do with some more recent places :-) 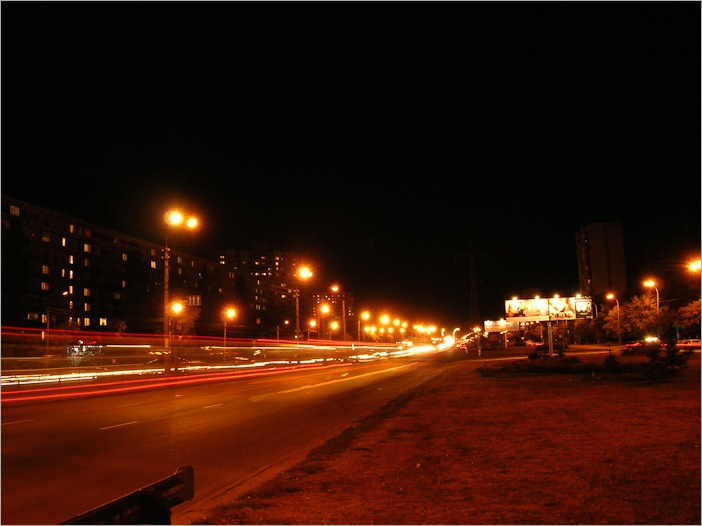 Ok, this is my very first night picture in Kiev, Ukraine. Point ‘n’ shoot, placed firmly on a high-tension electricity pole. In the dark you can distinguish the next in line… Yep. they have those in the city there…

Now I already made lots of comments on how to shoot in low light situations, so this time I would simply tell you some of the memories and feelings that went with the pictures.

When you go to Kiev, you will most certainly want to see the monuments. And monuments come in the form of religious buildings, mostly. By night, these buildings are really nicely lit. At least nowadays. In the Soviet period these buildings were mostly destroyed and the pieces dispersed. 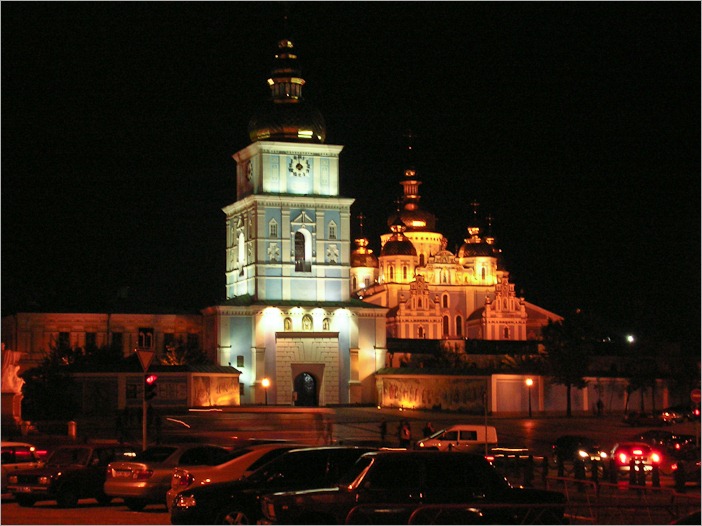 The churches are very well lit, but you still have to make do with the sodium lamps in the rest of the place. As you can see, JPEGs will not allow for perfect corrections. But since I was with friends that evening, I didn’t really care for the white balance. Better to keep the friends from turning white, it was bitter cold that night in the beginning of October. 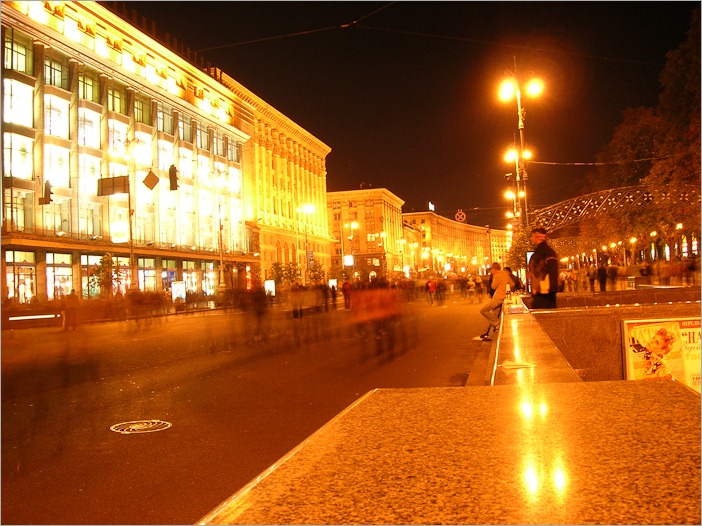 Khrestchatyk, the main street of Kiev by night

On Khrestchatyk, lots of things to see. Even at night. Now what you see here is a common sight during the weekend. On Saturdays and Sundays, Kiev’s main street is closed for traffic. Many young people come out and hang out on the street, drinking a little beer or something stronger… No suppressive laws against beer in Ukraine. If ever you go to Kiev, it is something you have to do. 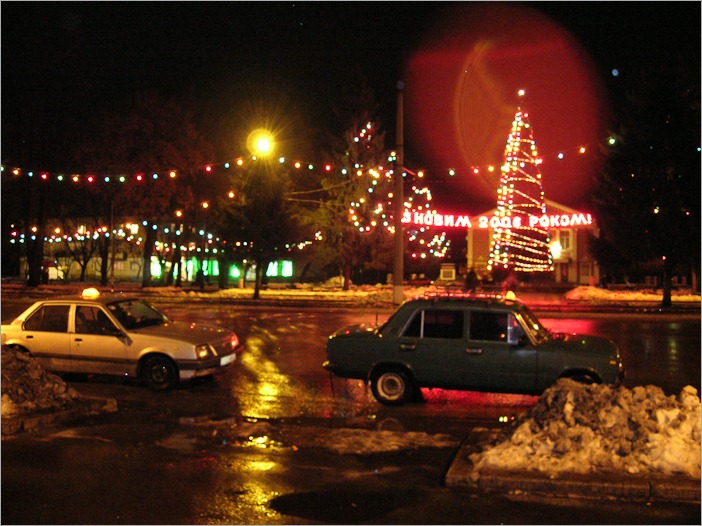 A little later we went to see the parents in Konotop, a city in the north-east of Ukraine. It was around New Year, the tradition there is to erect a huge Christmas tree and light it up. Most of the city will gather around this tree on New Year’s Eve. The above picture is not too sharp, I had only my legs to support me. No tripod in view. As you can see, the weather was not as cold as you would expect at this time of year. I even got water on my lens that night. 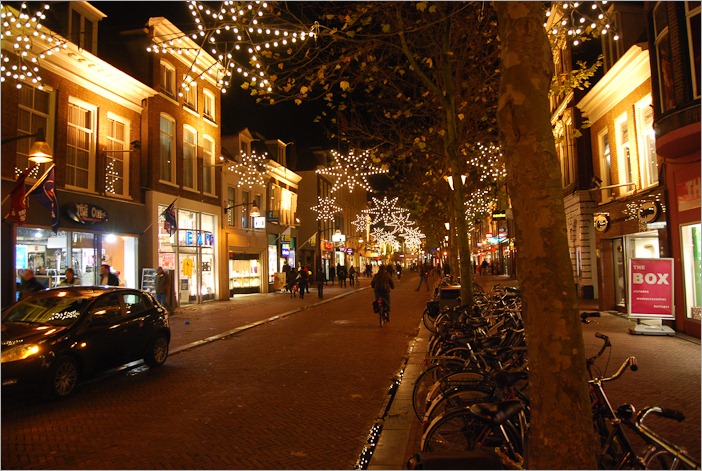 In Leeuwarden, in the north of Holland, Christmas lights were in LED, for the first time in 2008. Personally I prefer the warmer tints of the glowing light bulbs, but I guess the city sees that with different eyes. The bicycles are in Holland as common as fleas on a street dog.

Some private people can also do their lighting, with a nice different effect. 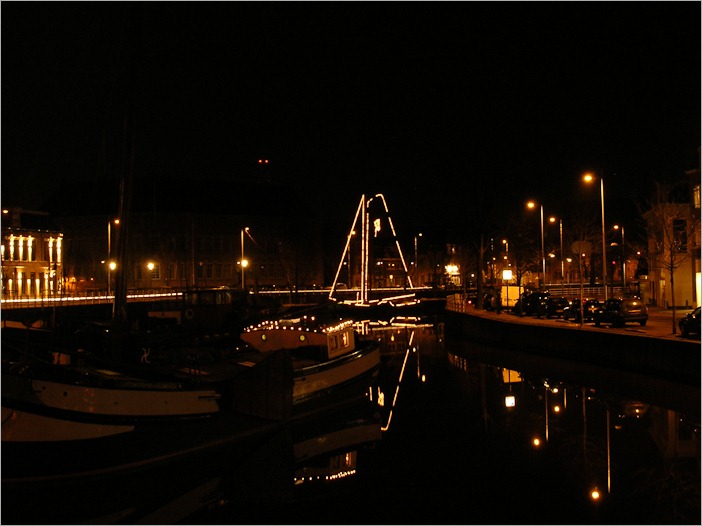 These people make a lot of trouble for their holiday lighting, and they don’t even ask for (financial) help to present this nice view to everyone who wants to see it. The canals in Leeuwarden date mostly from about 5 centuries ago, they protected the city in times of war and trouble. Some of the bridges also date from that period. Today, most of these bridges  are no longer functional. 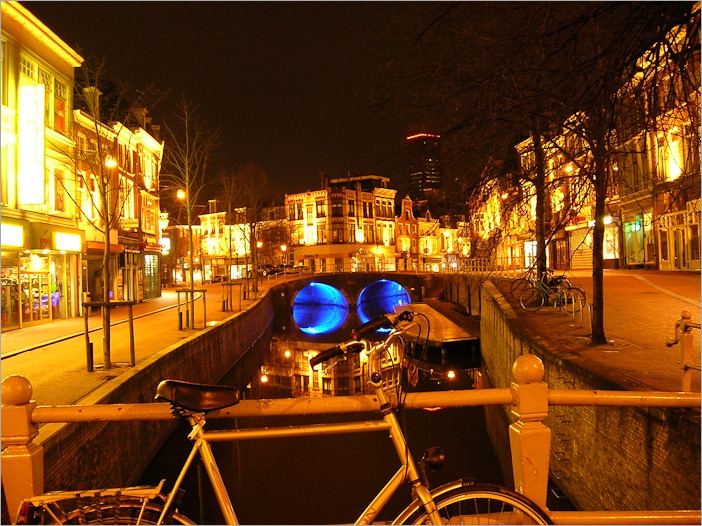 Without the Christmas lighting at the end of the year, there are pictures to be had in every city. Here another picture in Leeuwarden, this time with an impossible white balance. Try to correct this one, even if shot RAW, there is nothing much to do. Except in Photoshop. I still believe in the original film “values”. A picture should be good in the camera. Ehm, without tripod? Yes, the camera was set at the feet of Mata Hari. No joke there, I’ll show her a next time. 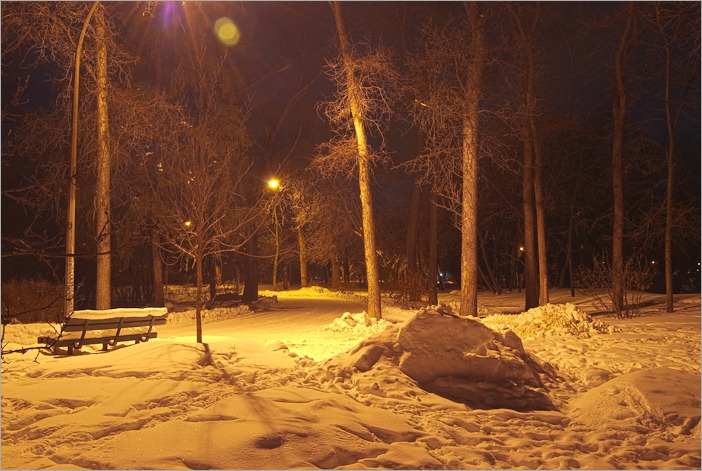 But then, what would we do without Christmas lights to take pictures in the dark? I guess we’ll still have to do with the light we get. And sometimes this calls for the dreaded HDR technique. HDR is often overdone and the tone mapped result is often less admirable than the not-so-good picture it started out with. Above is one of my few HDR pictures. I have done it several times, but this version is from Photoshop CS5, with the pro-photo HDR scripts in it. The result is nice and the way I remember it when I took this picture.

A part from the temperature, that is. I’ll never forget the cold that evening. 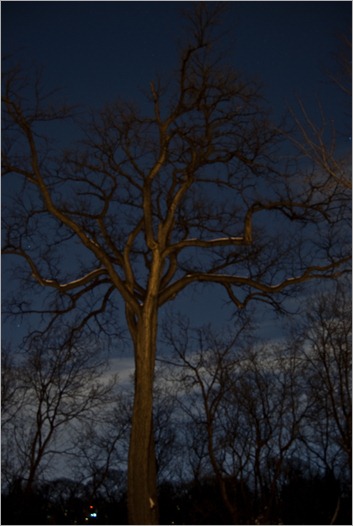 No light by night

But what if we have no lights at all to light our subjects? Well, I remember that even if it was cold (I guess it was something like –25C ) I found this tree a haunting, tortured sight. The sky was rather clear and there it went, 30 seconds of exposure. The snow was not the most stable. Nor was the tripod. Like this, the picture is nice, but it does not allows for bigger sizes. 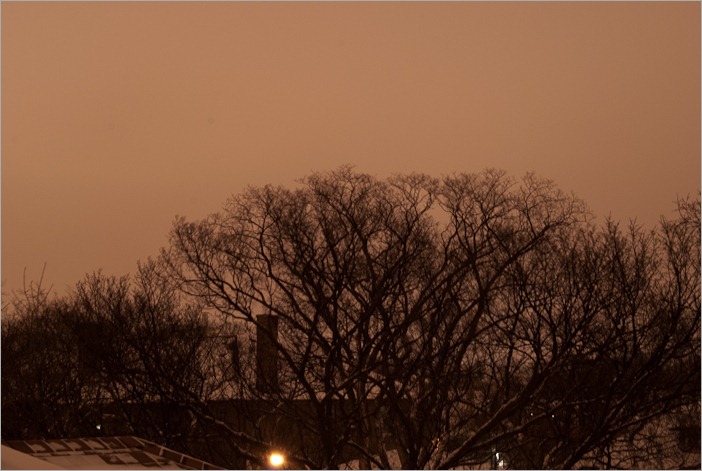 And then you always have the nights in Winnipeg, with clouds full of snow, ready to be dumped in the streets before the morning rush hour.

Of course the sodium lamps of the city light up the clouds in an eerie way. So strange that at first I was thinking that daybreak was near. But sunrise was still a few hours away. This picture was from my balcony when I lived on the fourth floor of the building. Great sight. 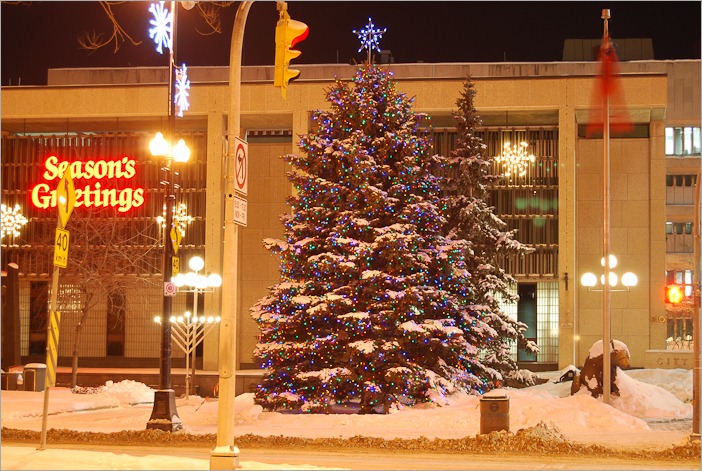 And well, the next day, after morning rush hour, the snow was dumped in the city and on the Season’s Lighting provided by the mayor of Winnipeg.

It looks like night shots can only be interesting in the winter, I guess I only had the chance to get out during the winter evenings. I’ll try to do better this year, I promise…