Weekend in white and blue

Weekends are for relaxing from the stresses of the weekdays. So Saturdays and Sundays are filled with… nothing. Well, not exactly. When your better half decides that it is time to go and “do something”, that weekend just got filled with all kinds of things. Luckily I am blessed with a better half that knows what we both need.

So the weekend was filled with white and blue. White for the snow and ice, blue for the muscles that ached after going cross-country skiing for more than my muscles would like.

Well, more blue was in the sky than in my muscles, for sure. I have never been a very sportive guy, but a bit of exercise and movement are always welcome. Apart from the three-fingered hands, my overall shape starts to resemble Homer Simpson, I guess I have to do something about that 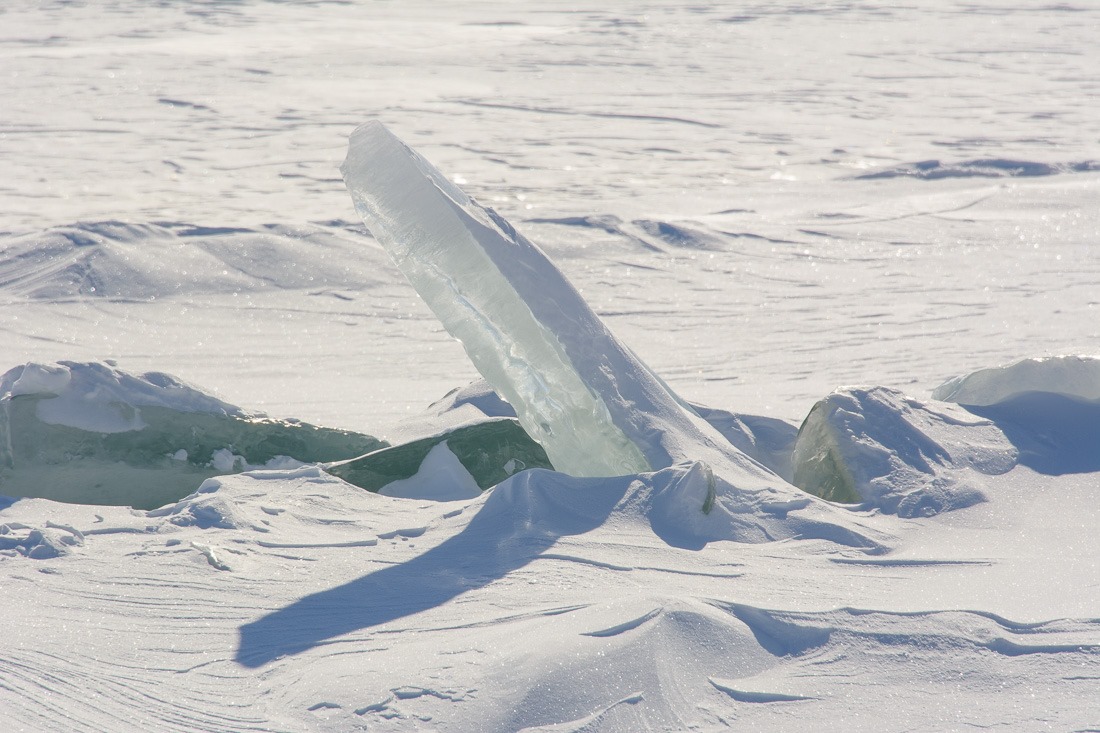 This weekend we went to Hecla Island, to the Lakeview Resort, to be exact. The place is great, food is decent and rooms are spacious. What else is there to say about a resort? So both days we went for a ski trip. I don’t take my camera bag with me on those trips. I have done that once and ended up losing parts of my camera and with snow in ears, mouth, nose and other places I don’t usually associate with snow. So when the trails were done, my goal was to get some pictures of the surroundings. 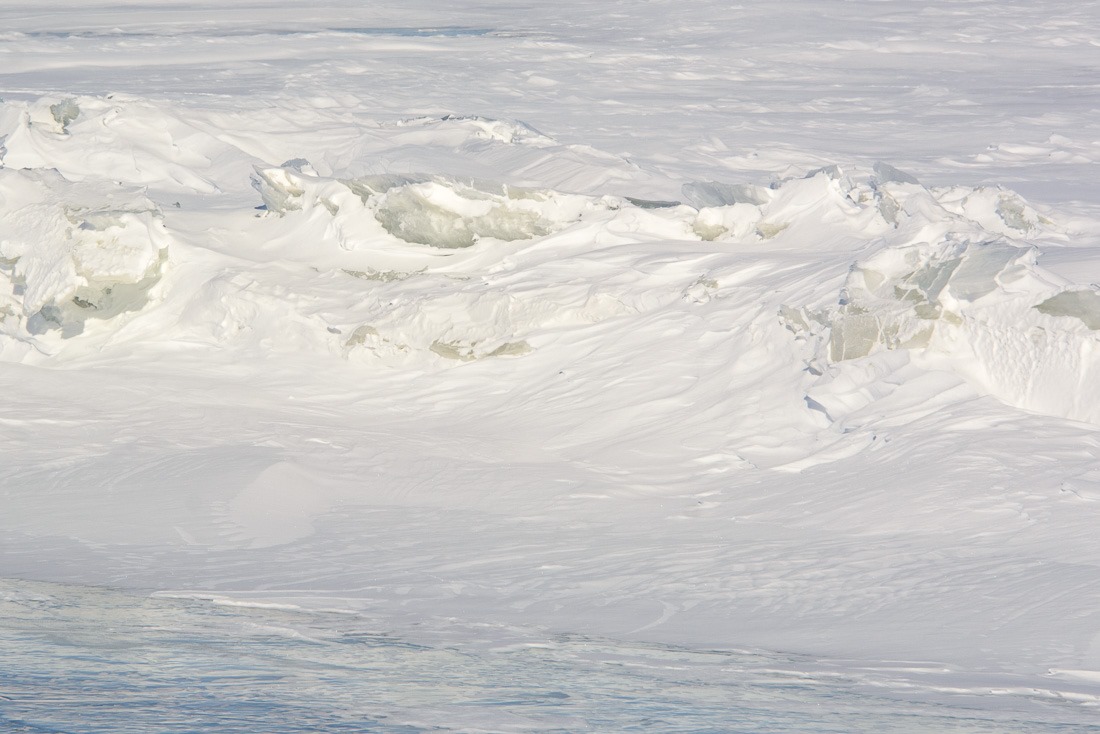 Well, the surroundings are a bit monotonous in winter. Ice ridges on Lake Winnipeg and snow drifts everywhere else and that’s mostly the extent of it. While the shapes of the snowdrifts and the ice can vary enormously, they remain snow and ice. 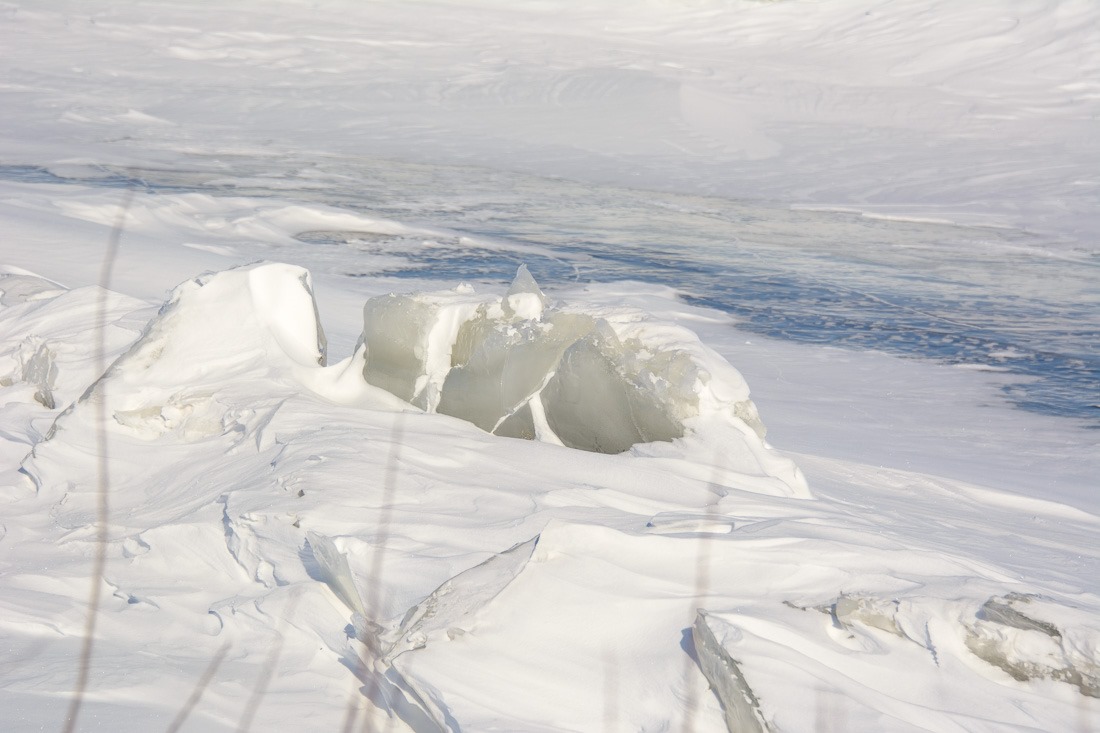 In short, my photographic endeavours were kind of… cut short. So the rest of the weekend was filled with in-house activities like spa and pool. Never thought I’d go to a pool in winter, but there’s a first for everything. Then we went for a little drive. On the way to the resort, taking the off-road roads, I had seen a bunch of tracks that didn’t seem manmade to me. 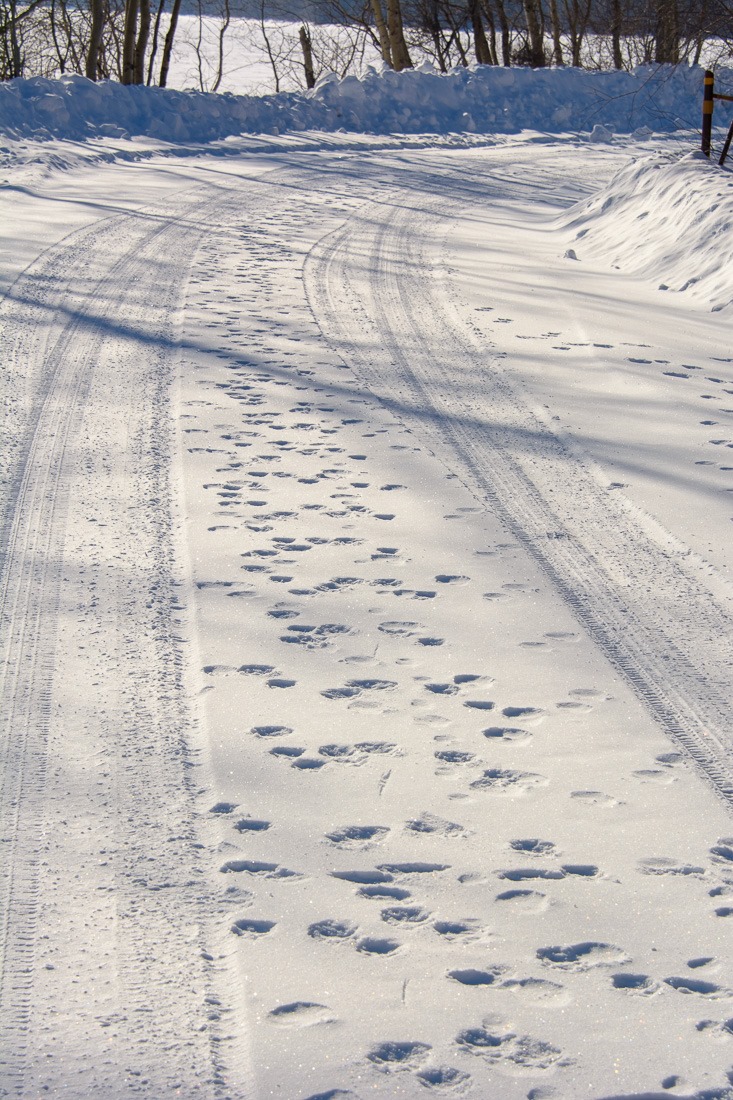 Usually there’s lots of deer tracks all over the place, but these seemed to be dog tracks. Except that unleashed dogs are not allowed and there were no shoe prints accompanying these tracks. Also, the paw prints seemed a little oversized for a dog, even a big dog. 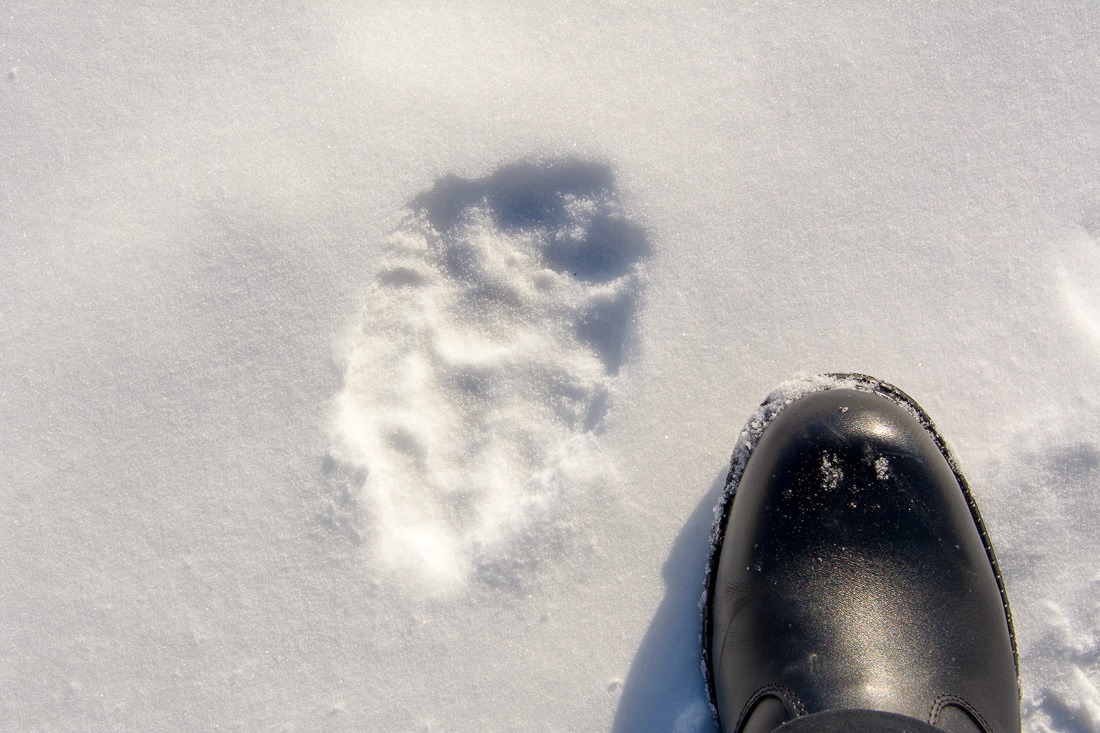 For comparison I put my own foot beside one of the prints. After asking around a bit, the locals told us that there were lots of wolves in the area. I guess I’ll have to go back there one of these days to see if I can’t get one of them to pose for my camera. I’ll promise to give them a print or two for their dens. 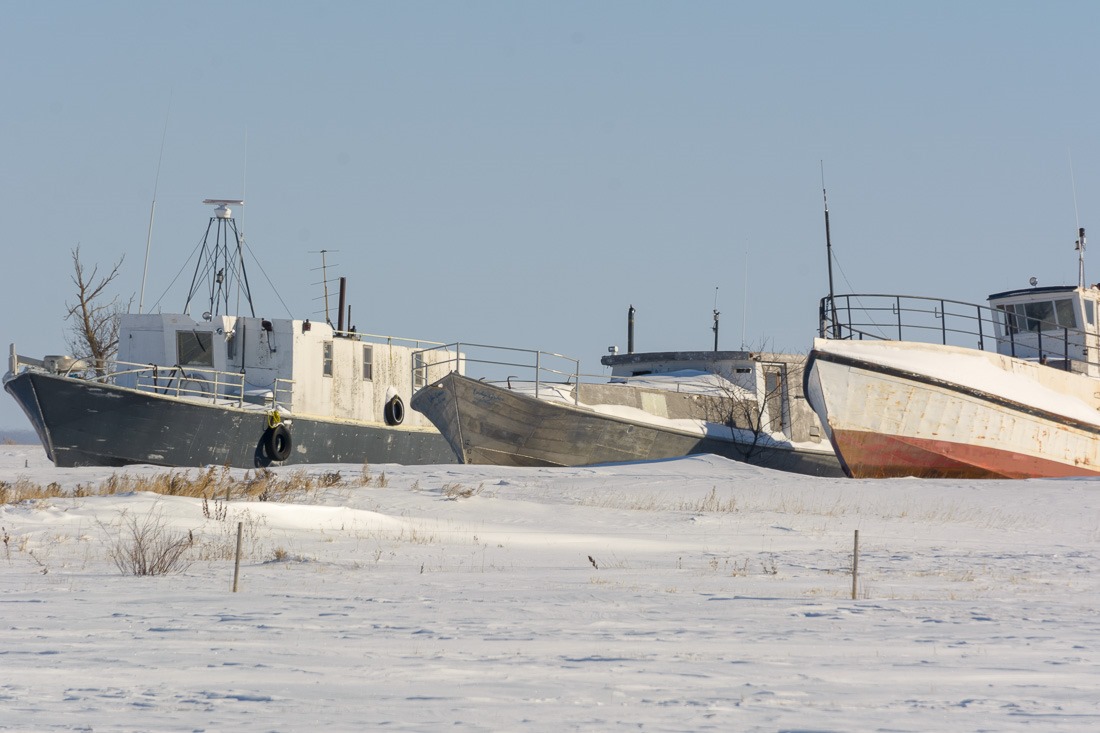 Then it was time to go back to Winnipeg. Taking the long way through Riverton we came across these fishing boats out of the water. I have no idea if these are active fishing boats or active husks. The fact that they were lying in the snow on dry land and not in a dock was the key for me to take the picture. 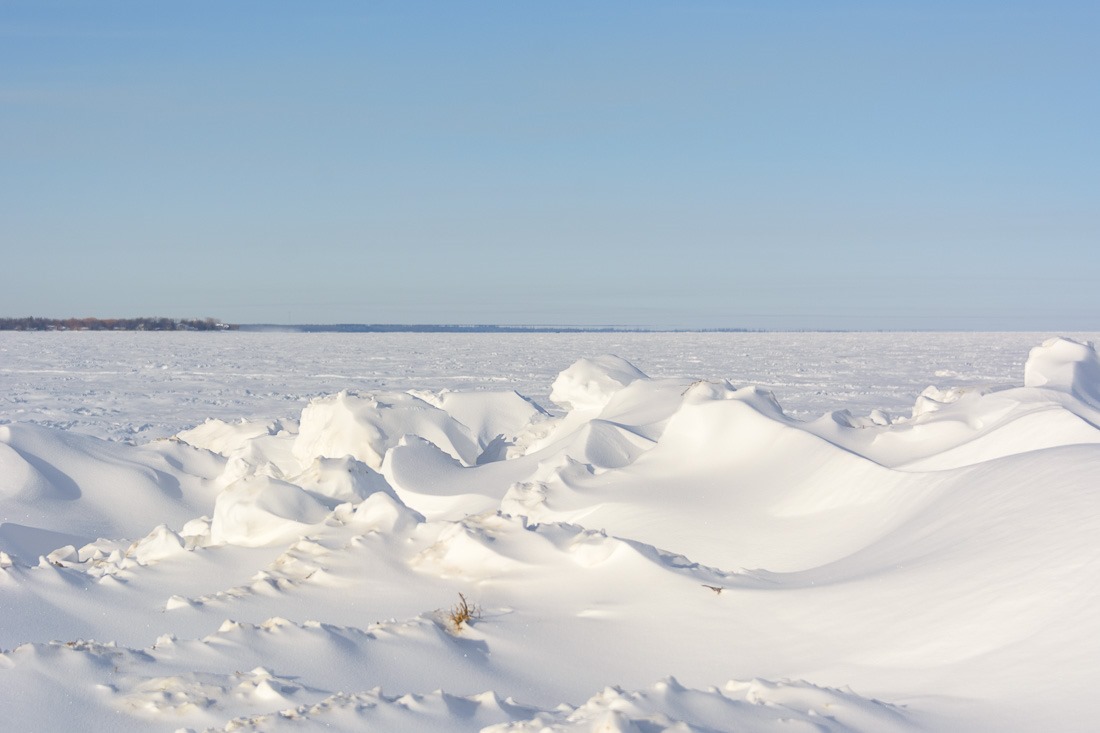 So for the one picture that has both white and blue, we had to go to Gimli and shoot the lake. The above shot was taken looking back to Gimli from the south. If the picture looks cold or makes you shiver, rest assured, it was indeed cold. As I have said before, the more the winter advances, the less we want to talk about the temperature here in Manitoba.

So this was a weekend, a weekend in white and blue. If you are in the area and want to experience the same thing, go and have a look around Lake Winnipeg, there’s white enough and with a little luck, the blue will show itself as well.