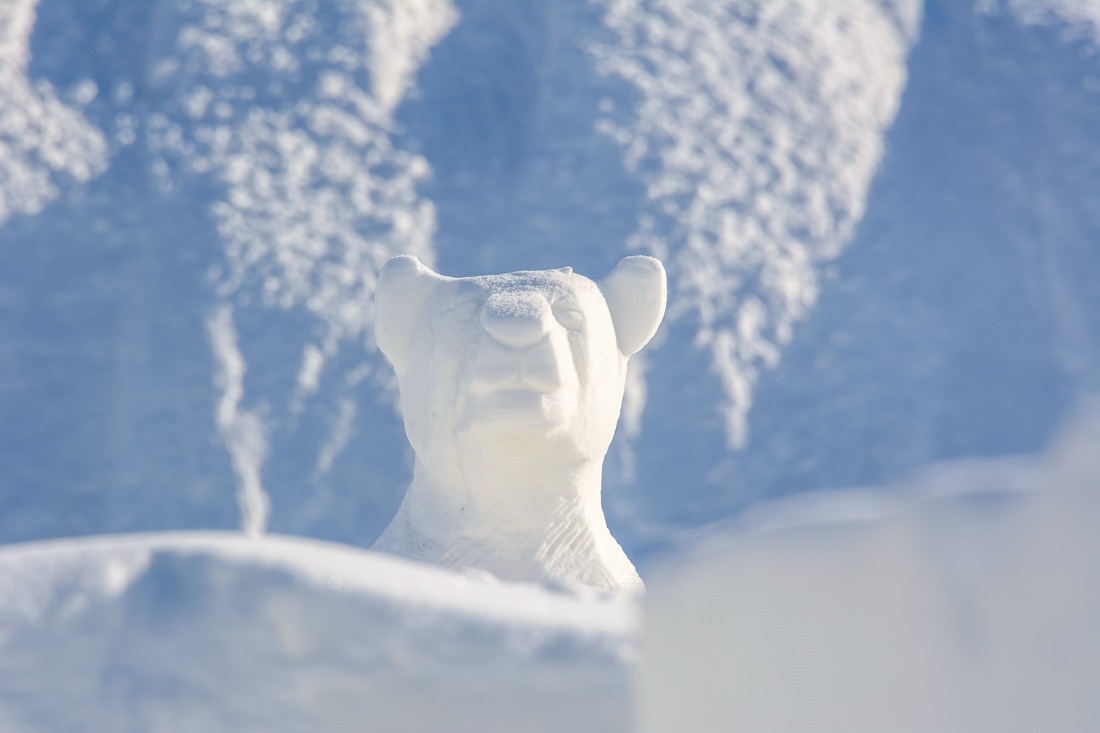 Embracing that cold only goes to far for me. I am said to be tough, but I also like to think I’m not stupid.

Not stupid enough to stay in the biting cold for hours to shoot the entire Super Blood Wolf Moon Eclipse from end to end. Ten minutes was more than enough for me. And this was the result: 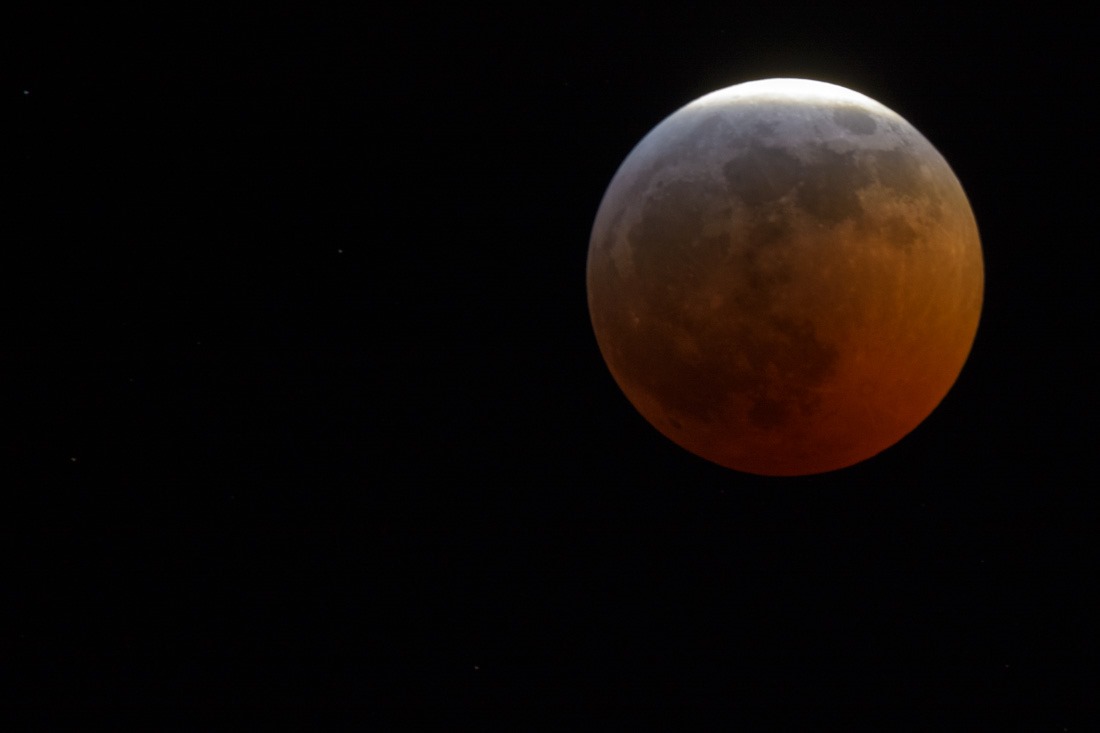 As you can see, the eclipse was not yet complete when I had enough of it. It was only –24C or thereabouts, but the wind made it pretty uncomfortable. And since the difference between a Super Moon and a Tiny moon is about the same difference as between a 16” pizza and a 15” pizza at 10m distance, I was not worried to miss anything from that part. 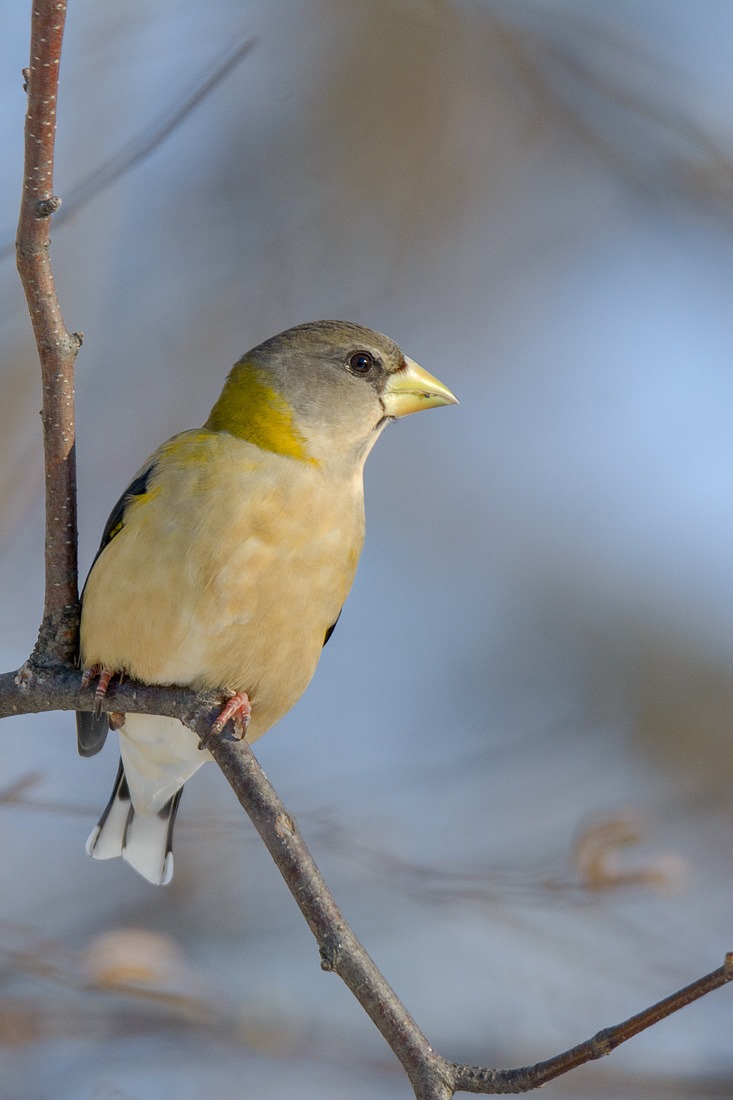 Saturday was the first day out with an old friend of mine. We wanted some “birds” as currently the Snowy Owls and Great Grey Owls seem to have snubbed the province. So we went to a spot we know is held by another friend. Joe is feeding the birds seeds every winter. Every winter he gets different birds although some of them must be old clients by now. 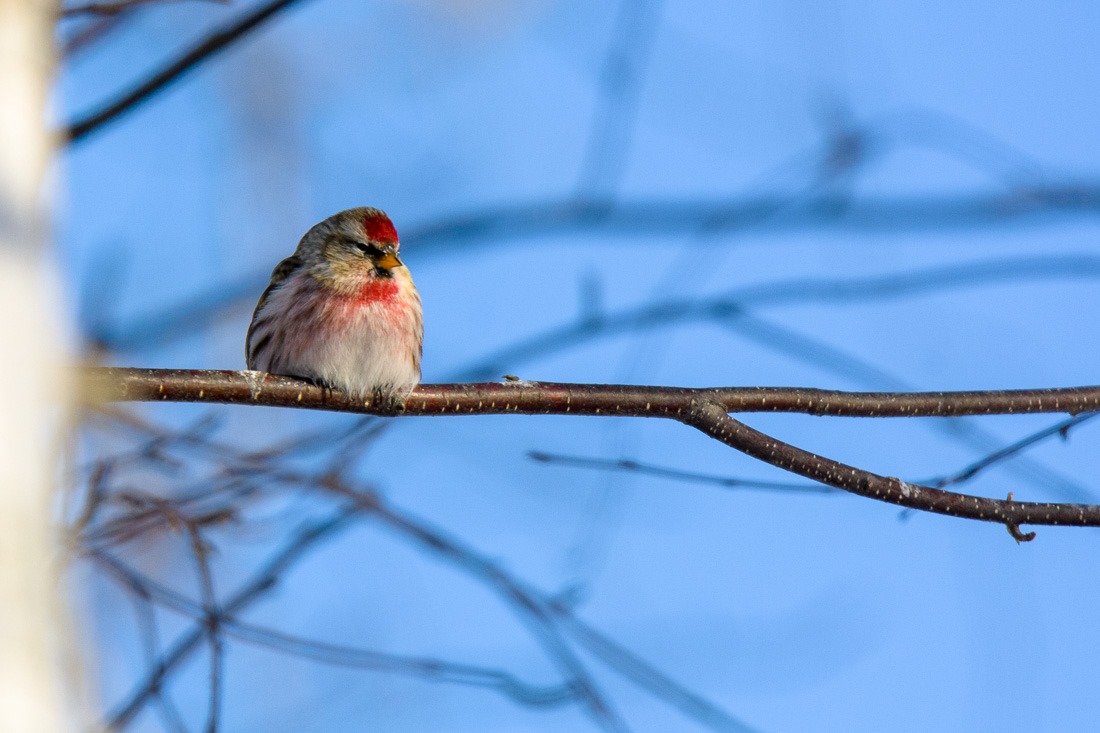 Joe’s Birds are fairly tame and used to his dogs. Big guys with black cameras are a bit of an exception. When we move, the whole flock of birds flies up high into the trees. After a while they come back down. Chickadees first, then Redpolls and Nuthatches, then the bigger birds like the Grosbeaks. 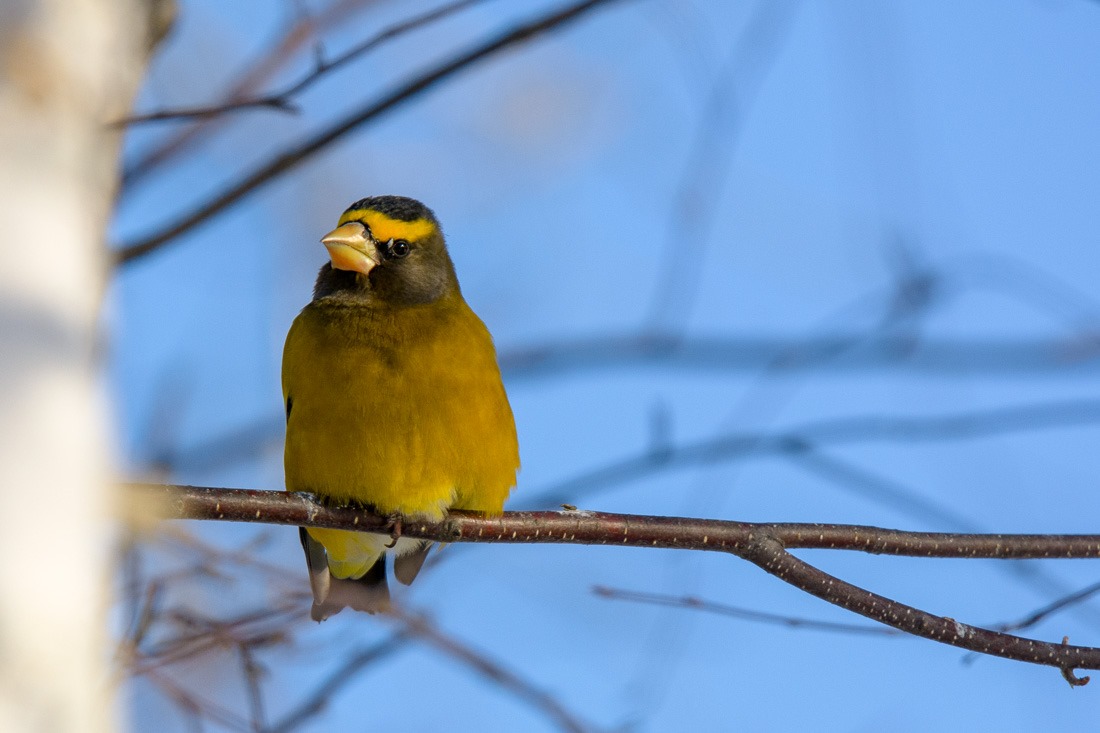 The Chickadees would eat out of our hands if there were not so much food on the ground for them. The Grosbeaks are plentiful this year, mainly due or thanks to a shortage of pine cones up north. Hunger makes them travel. Now it’s not nice to be happy about their misfortunes, but I am happy that I can get lots of pictures of them. 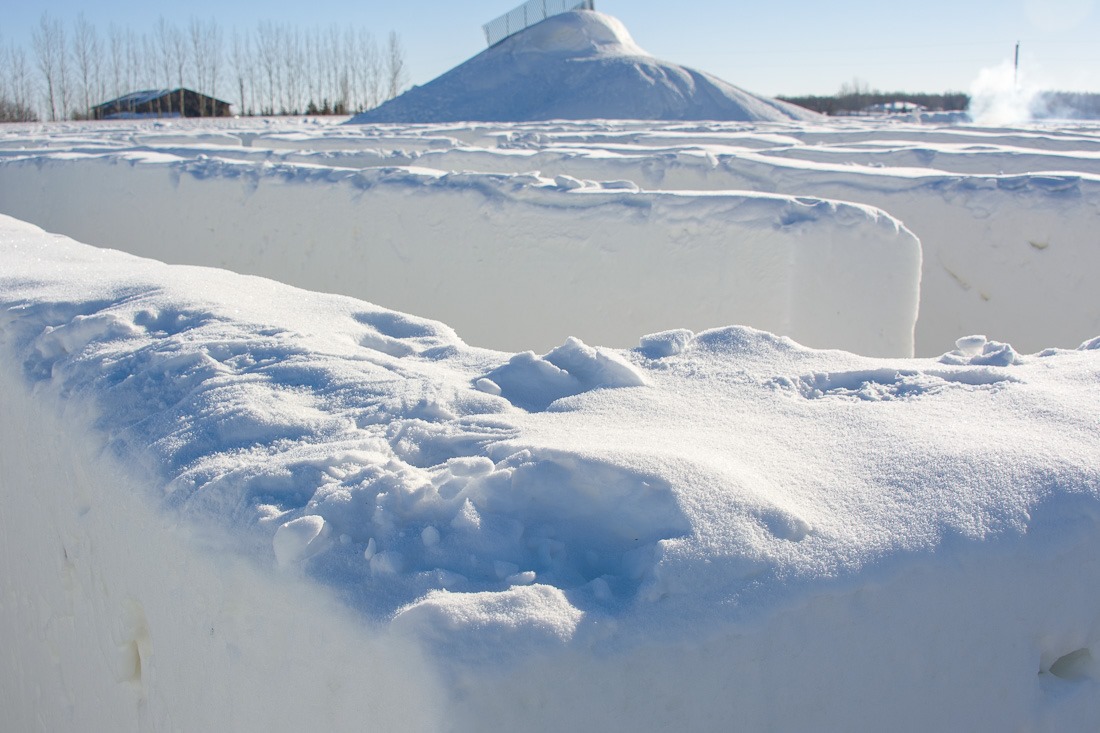 A partly overview of the maze

Sunday was a different kind of day. Still cold, with temps around –30C at noon, but with different fun. In St Adolphe a farm is every year doing a Maze in Corn. This year they decided to make a Snow Maze as well, to our delight. Not as big as the corn maze in fall, but a good sized maze where you can get lost for hours on end. 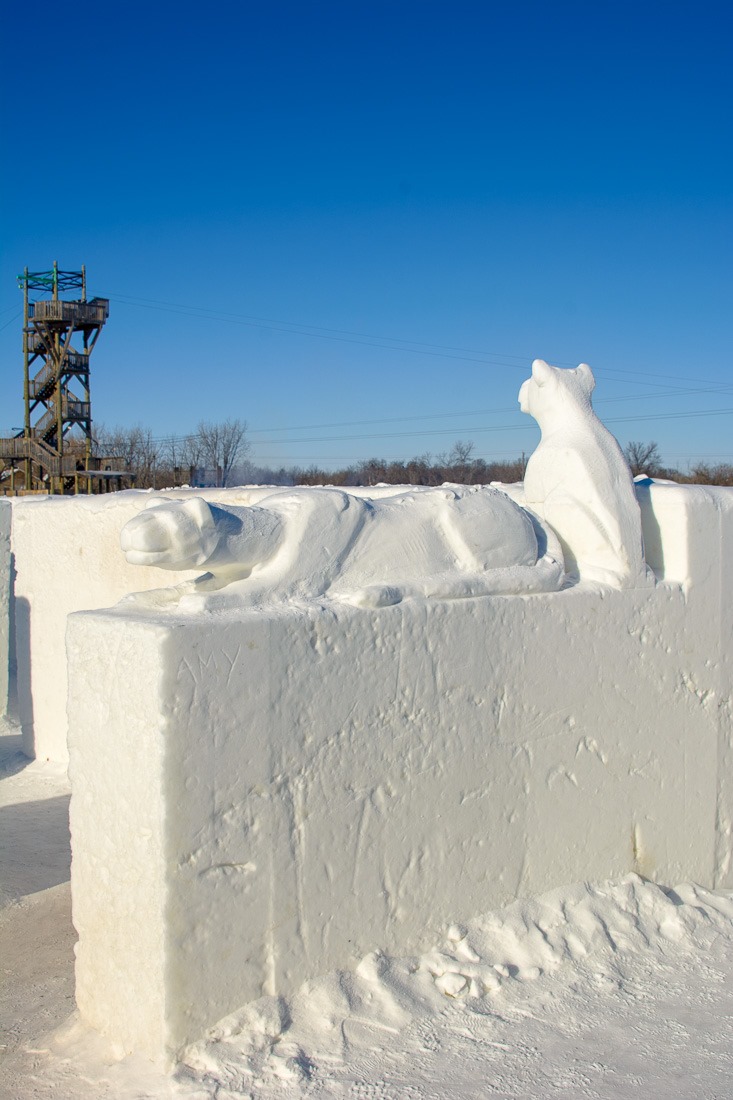 We were given a task to discover the five warming fire pits in the maze. Each firepit was guarded by some animals. I can’t really make out what the above animals were, but they stayed in hiding until we found the firepits. The walls of the maze were about six feet high, high enough not to be able to peek over them. However, with a camera in stretched arms above my head I could still shoot some of it. Not enough to create a map of the maze, though. 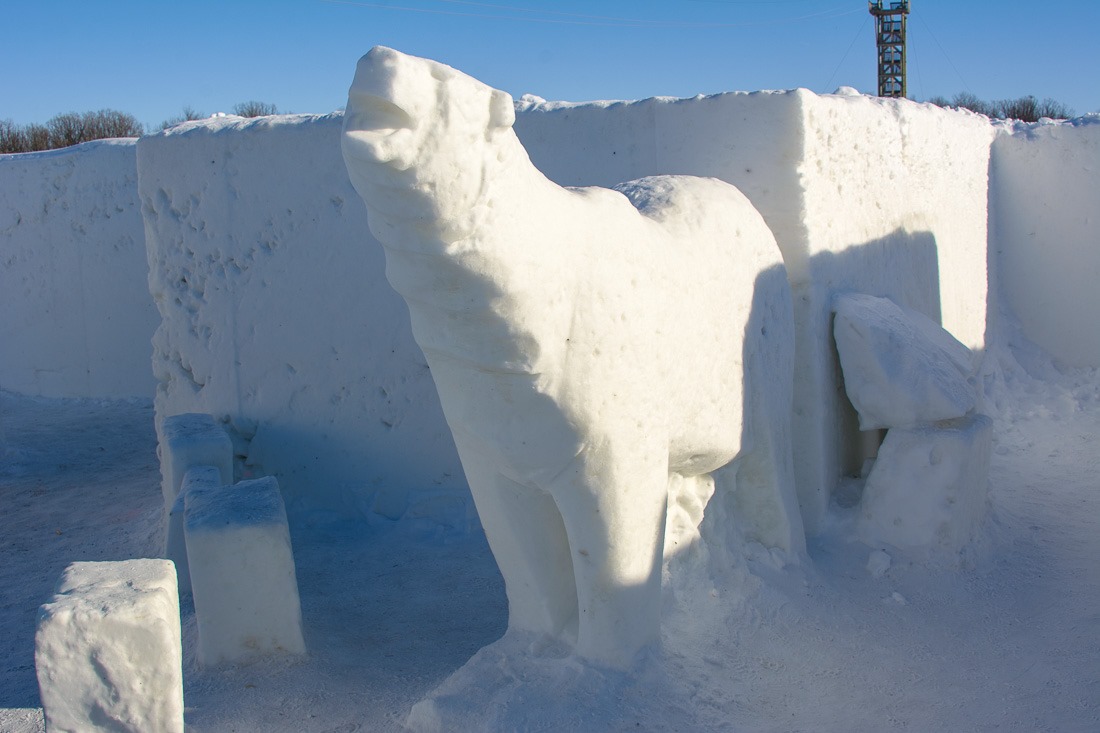 Polar bears were also present in the maze. These were the friendly kind, the ones that don’t try to have you for lunch. Some of the sculptures were just a little higher than the walls and they presented sights like the one in the lead picture of this post.

If you are in the neighborhood this winter, take St Mary’s Road south of the Perimeter and follow it until just before St Adolphe. The Snow Maze is there waiting for you. If you happen to be there with a little warmer temperatures, like say –12C, you will have a blast in there.

Cram all this in a weekend and you have a nice, typical Manitoba Weekend. A weekend for all to enjoy.