So, after having brushed off my nostalgia for the summer months, it’s time to see what we can do in the winter months. If I listen to some people, winter seems to be the time to stay inside or move to warmer climes. Most definitely no snow, ice or frigid temperatures, please. In Manitoba we can enjoy all seasons in a reasonable package during the year. Even if winter seems to have the upper hand. 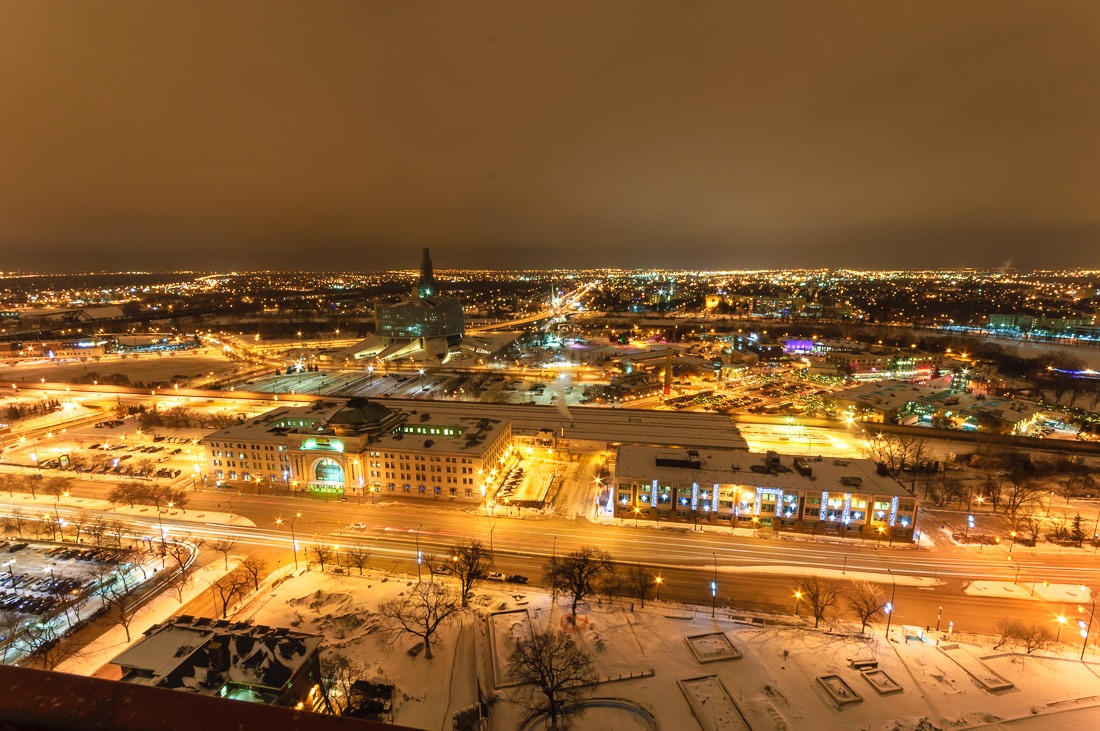 Does that mean that we need to stay inside? Not for me.

Manitoba has one of the harsher winters on the planet, with Siberia being a close second

So bundle up and enjoy a few of the moments I have immensely enjoyed in the last few winters here in Manitoba. The lead picture was taken from the rooftop of Prairie 360, the famous revolving restaurant in Winnipeg. It was not taken from the revolving roof though, that part of the building was off-limits. 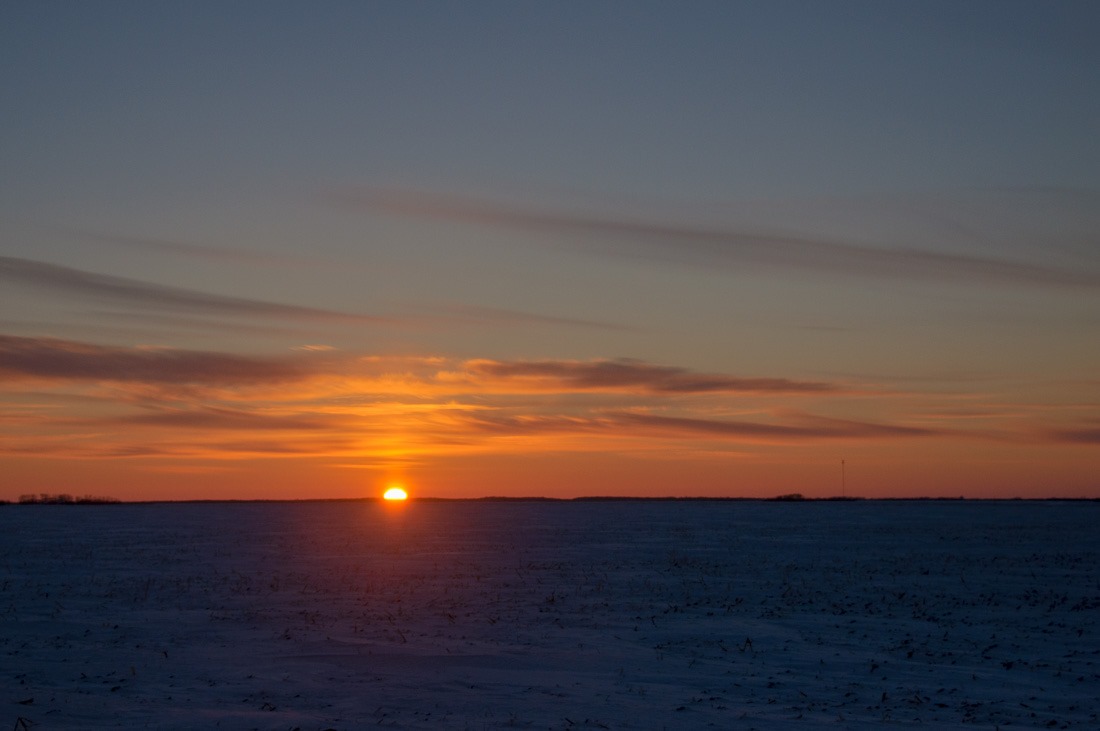 Prairie sunsets are famous here in Winnipeg, mostly because we are in the middle of the prairie here. It’s easy to understand the cold and the expanse when you see a sunset like this one. This shot was from January 1st, 2014. Not sure what I had been doing the night before but at least I didn’t shake the camera too much for this shot. 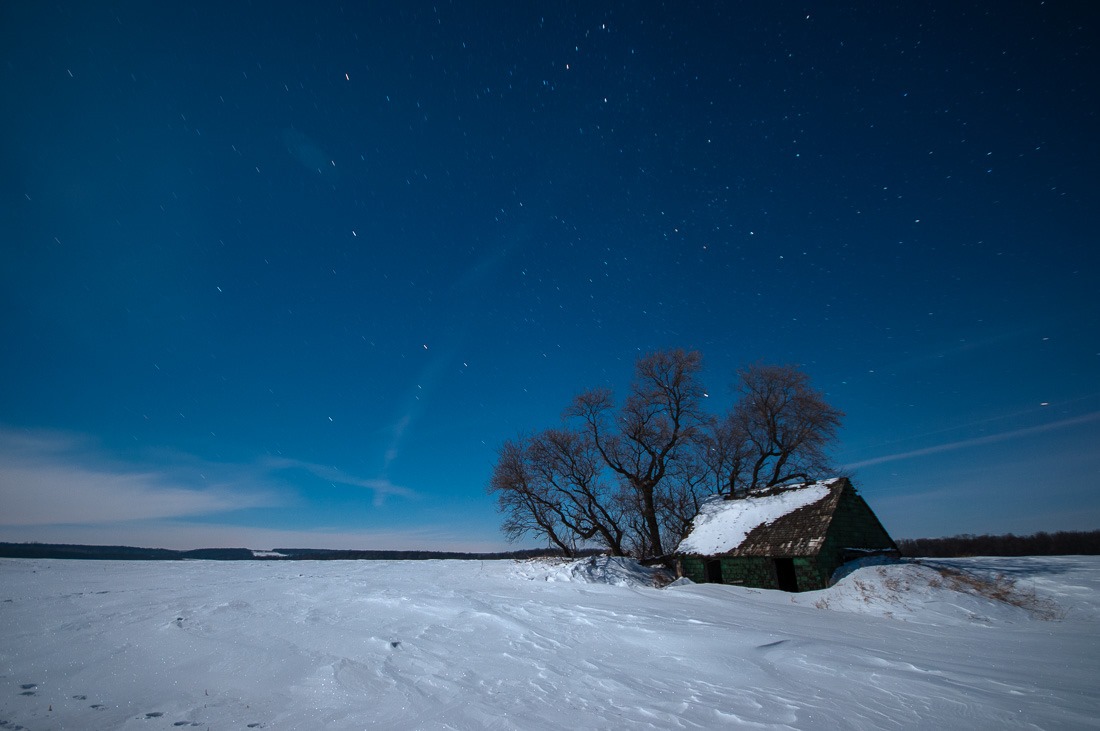 On another occasion, friends of mine were out in the middle of nowhere and invited me to come shoot with them. The intention was to shoot aurora during the night. What was the most “interesting” of this outing was that when I asked where exactly they were, I only received a set of GPS coordinates. I managed to find the spot. Shooting in the night can give some really interesting pictures, depending on your spirit of the moment. If one simply complains about the cold and stays in the car, this shot would not have been possible. 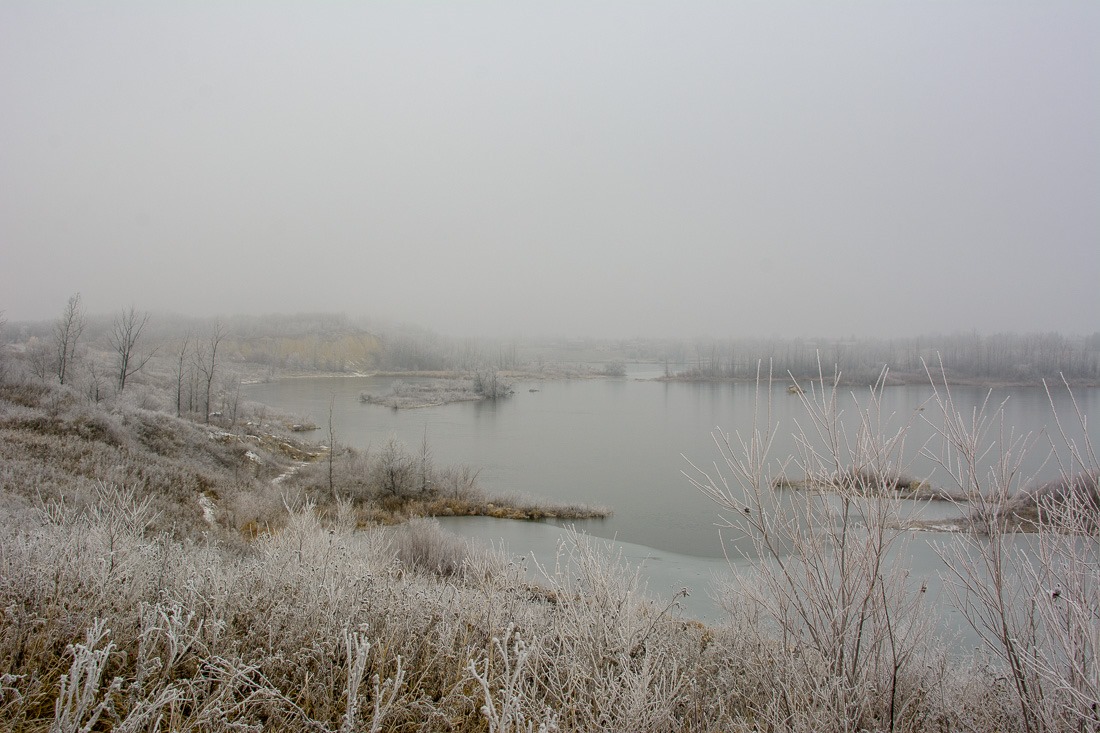 Some days are not as spectacular as others. Many days in winter are simply grey and cold. Yet finding an old quarry not too far from the city yielded this picture. Not too far into the season, the water was just starting to freeze up. Hoarfrost and snow did the rest. 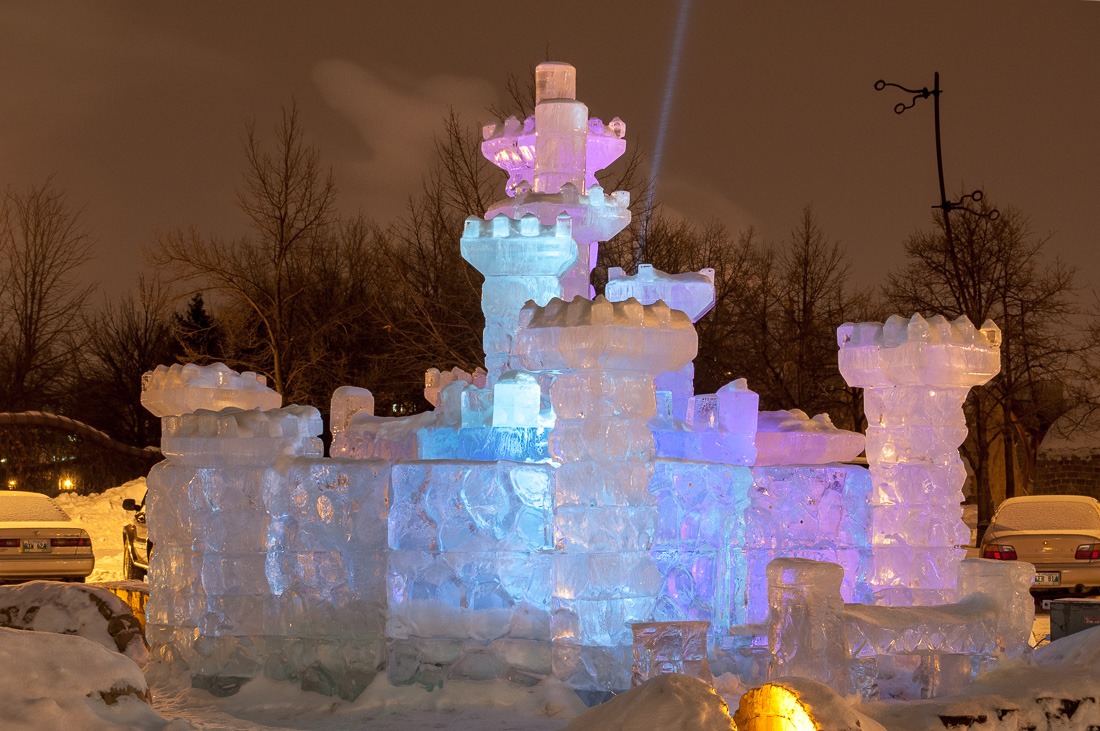 Now you might ask me what you can shoot in the city if you don not have transport to go far away? Well, the city will have its own charms. You may find a haunted castle on a parking lot. This one was cold enough to freeze any hearts around it. Others will build sculptures from snow as I already showed here and here. 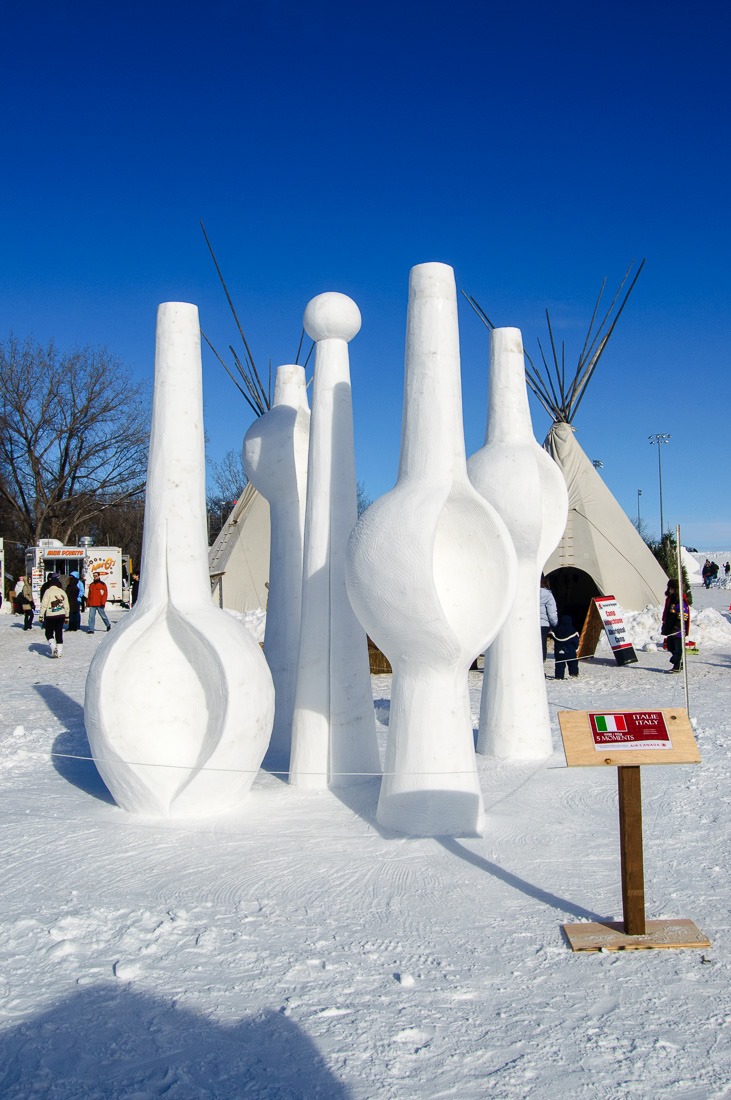 Snow sculptures are done by professionals from all over the world here in Winnipeg. The Festival des Voyageurs attracts them from everywhere, even from Italy, a country we usually associate with warm weather, wine and pizza. Yet they come here to create snow sculptures. 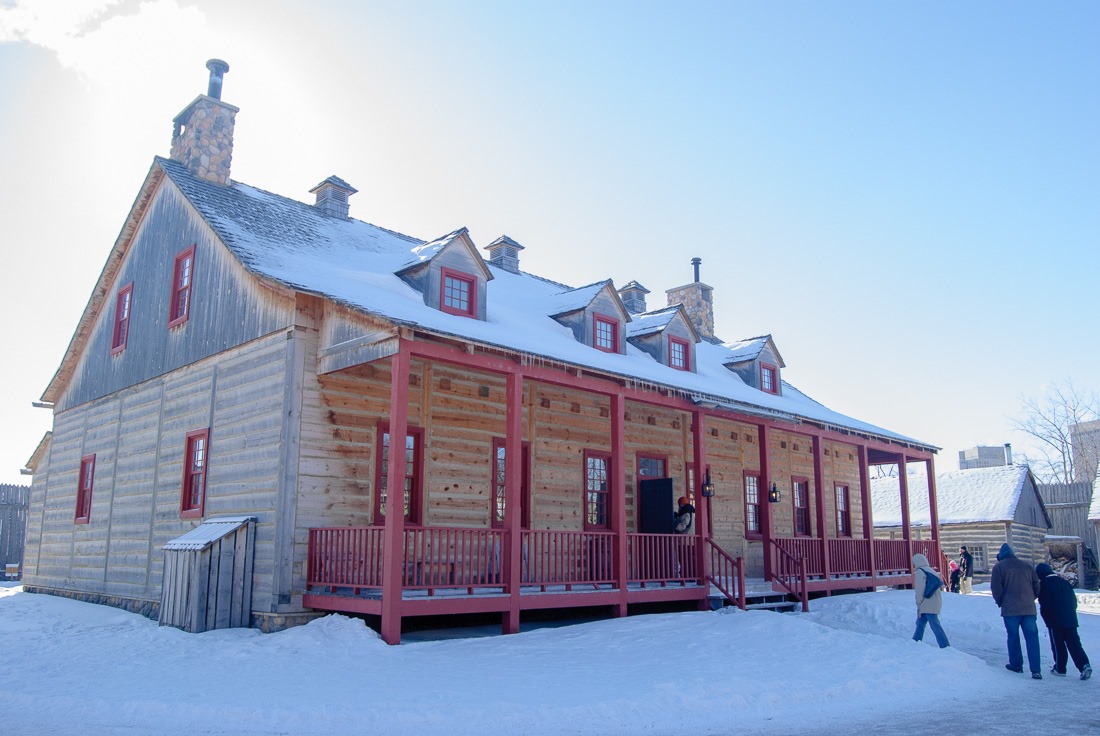 When it is too cold to stay outside for a minute longer during your photo hunt, well, there are always places where one can get in and have some warm chocolate or something stronger. Here, in Fort Gibraltar, for example, one can get a full meal or something lighter during the time of the Festival des Voyageurs. 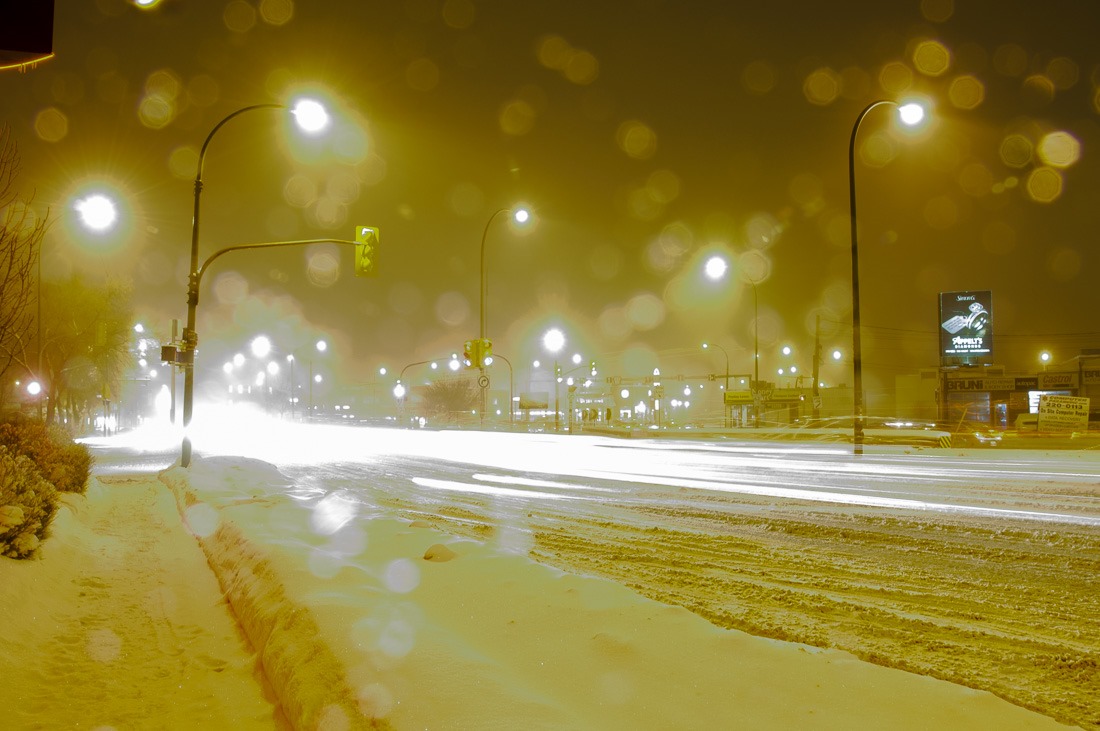 But even when there is no Festival to enjoy, things are not completely lifeless. During blizzard conditions it might be fun to go outside and take advantage of the situation. Chances are that traffic will be minimal and shooting the roadways from interesting vantage points may be possible. In any case the falling or blowing snow will make for interesting shots. 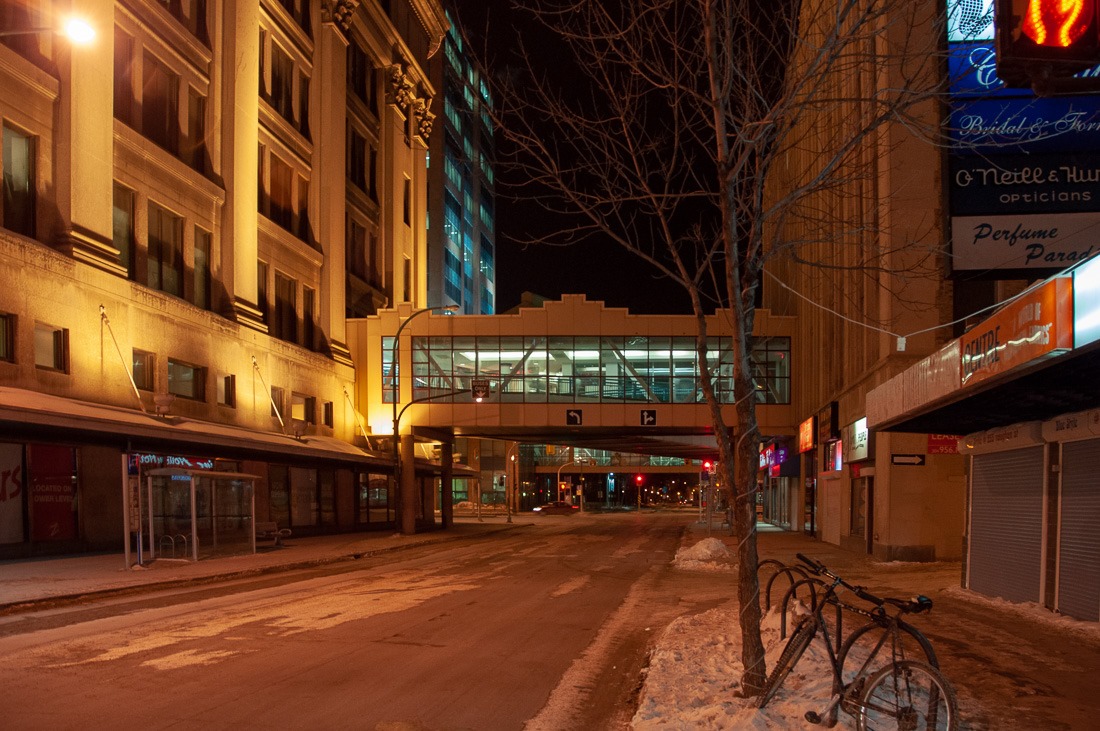 Downtown Winnipeg may be another option. At least you can get there by bus and not worry about having to park your car and subsequently dig it out of the snow when you’re done shooting. Long exposures can make whole streets look empty and deserted. In the shot above, there was nobody in the street to begin with, although I did use a long exposure for this shot.

The point I am trying to make is that whatever your tastes are for the winter in Manitoba, there is always something worthy to shoot. Even what was unusable last year may be spectacular this year and vice versa. There are no two years the same for shooting winter here. You can be assured that I will be writing more about this in the coming months.

Until then, take care …