A trip to the far east

A few weeks ago, it was summer. Hot days and warm nights. The ideal time to go camping with the loved one. We had been roasting here in Winnipeg for a few months already so the time had come to take some of that to a different place. We decided to go east. The west was burning and suffocating from what we had heard. 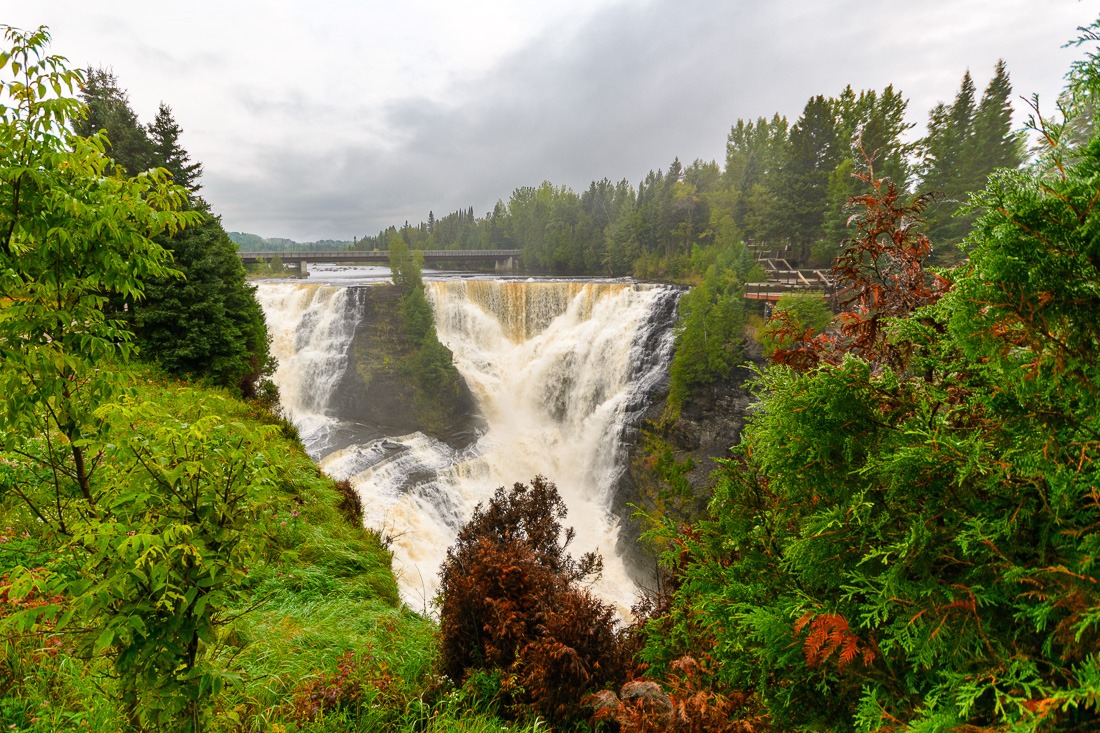 The east, as far as Ontario went was still fairly spared from forest fires and it looked like the best solution for us. So east it was.

The first stop was around Thunderbay. The whole day had been hot and muggy. Long live the AC in the car. When we arrived at Kakabeka Falls in the evening. Clouds had gathered over the evening sky and watching stars was no longer… well… in the stars

. The falls were magnificent. So the first thing to do after pitching the tent was taking pics of the falls. It was already getting dark, and it seemed like the falls were warning us of water to come our way. Little drops were coming down. We put it on the account of the falls and didn’t think more of it. 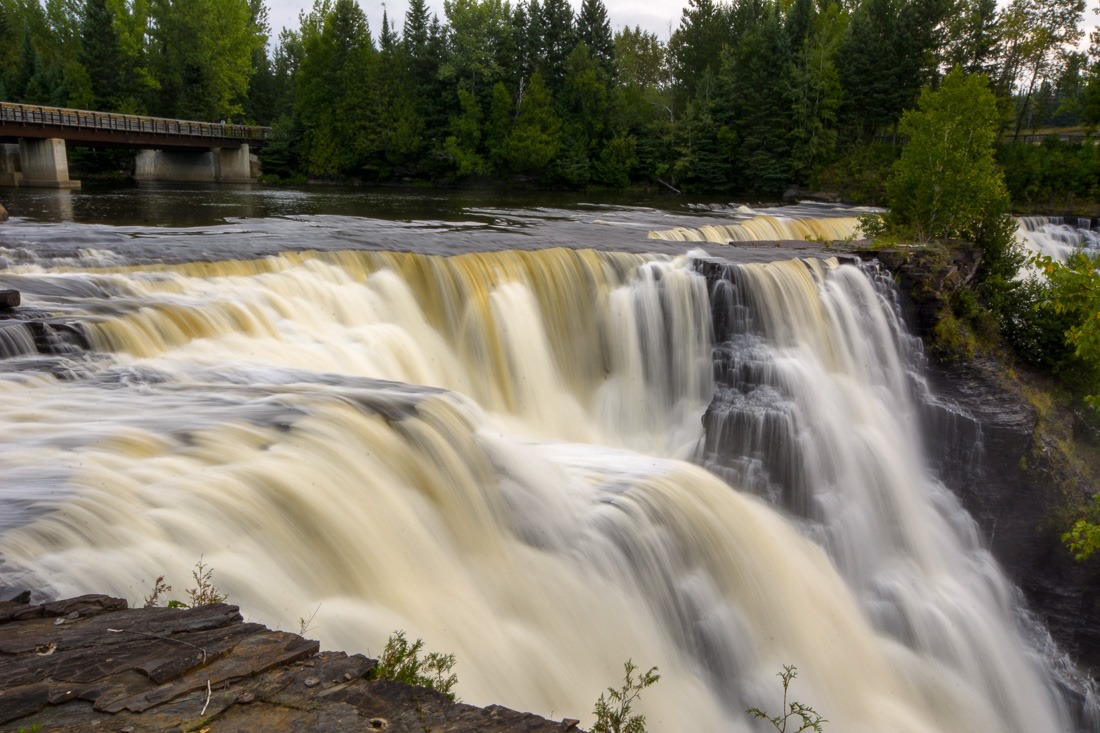 During the night, however, a huge thunderstorm came down on the campground. The campground had lots of trees and we were camping just beneath them. Rain came down by the bucket so I didn’t even attempt to shoot the storm. The next morning we went back to the falls, just to see the effect of the storm. Lots more water coming over the edge. 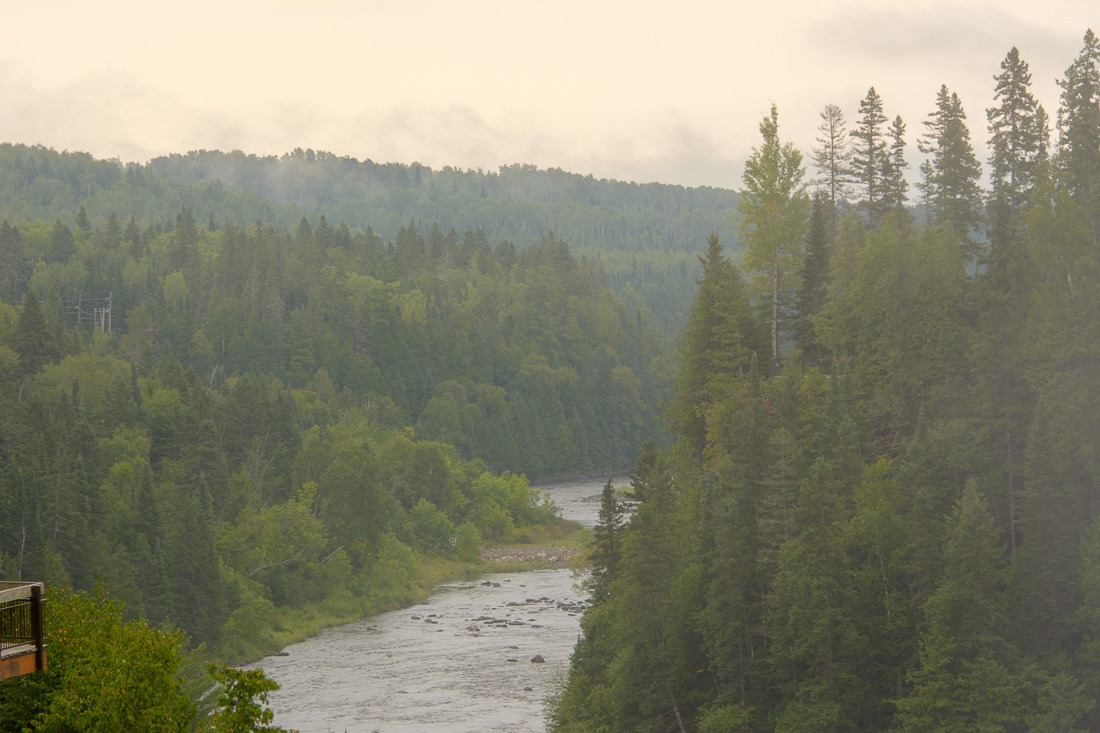 Downstream of the Kakabeka Falls

On the lee side of the falls the landscape was still foggy from all the moisture of the night. The Kaministiquia River quietly dissipated all the water. We decided to go to the city of Thunderbay, to get some groceries and to snoop around like real tourists from another country. 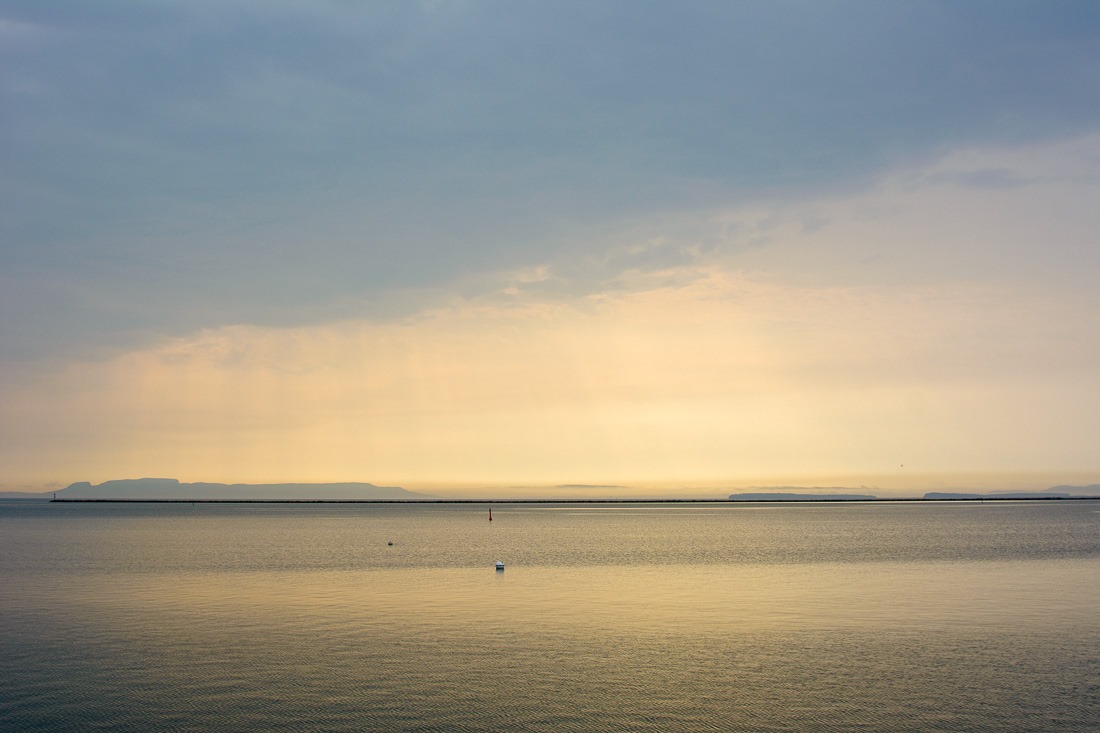 From far, we could see the “Sleeping Giant”. This giant is one of the sacred places for First Nations. They believe that this is the place where Wanabozho is sleeping. Once we had had the groceries for the day in the car, we went on on our route. Signs on the side of the road claimed there was amethyst nearby. So we went on the “hunt” for amethyst. In fact, we went looking for a whole amethyst mine. 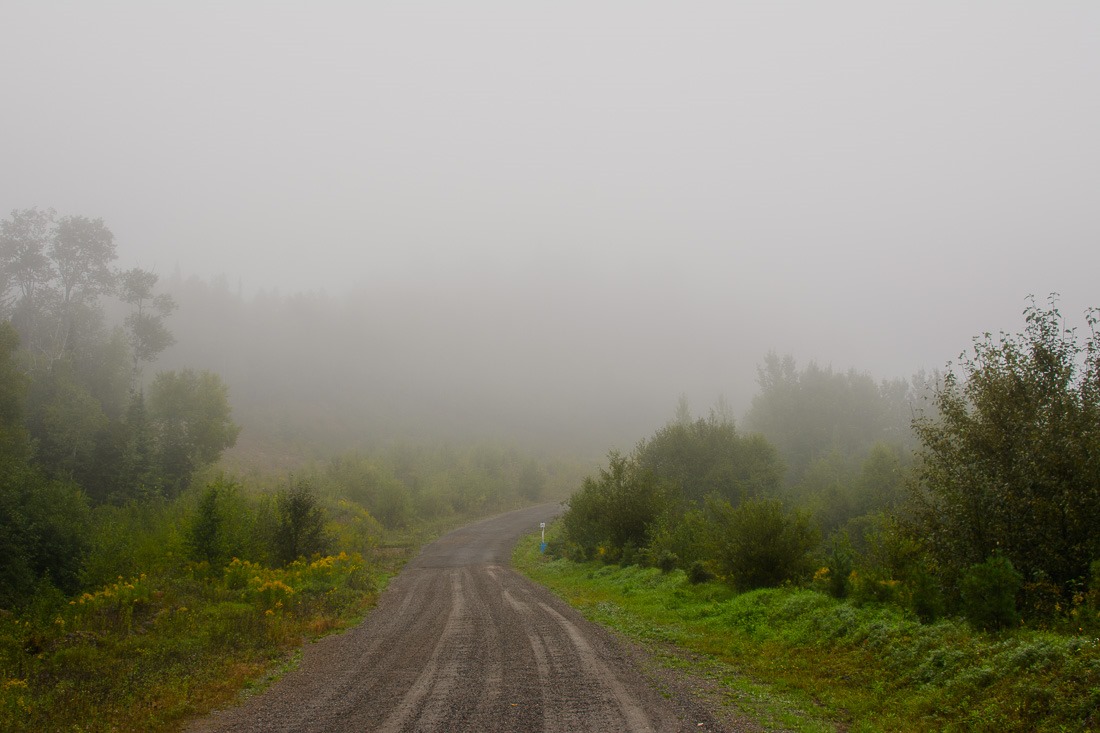 To the Thunderbay Amethyst Mine

Along the way, there were signs claiming panoramas and exclusive lookouts. I think we must have overlooked them

. After a fairly long drive over dirt roads through the hills, one cannot call them mountains, we arrived at the Thunderbay Amethyst Mine. Chunks of the stuff can be found everywhere on the premises. 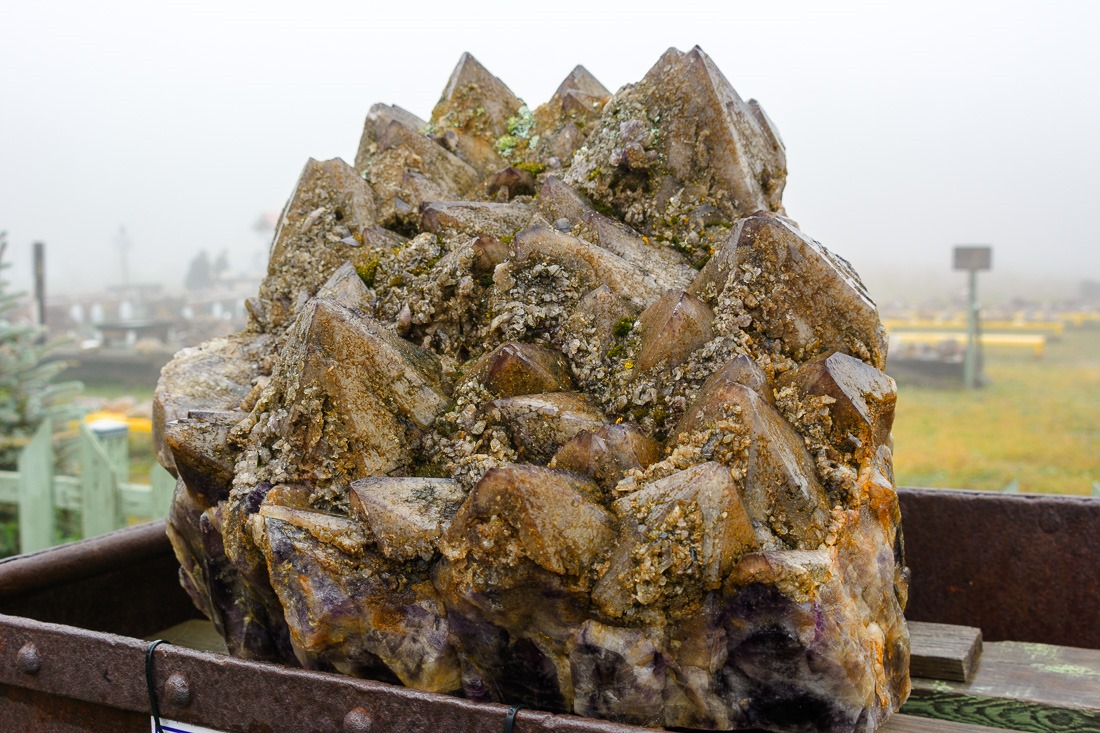 An old mine cart is placed at the entrance of the mine. The above chunk was about 2 feet in diameter. The size of the crystals is simply phenomenal. However the exquisite views that were promised along the road here were kind of… invisible. 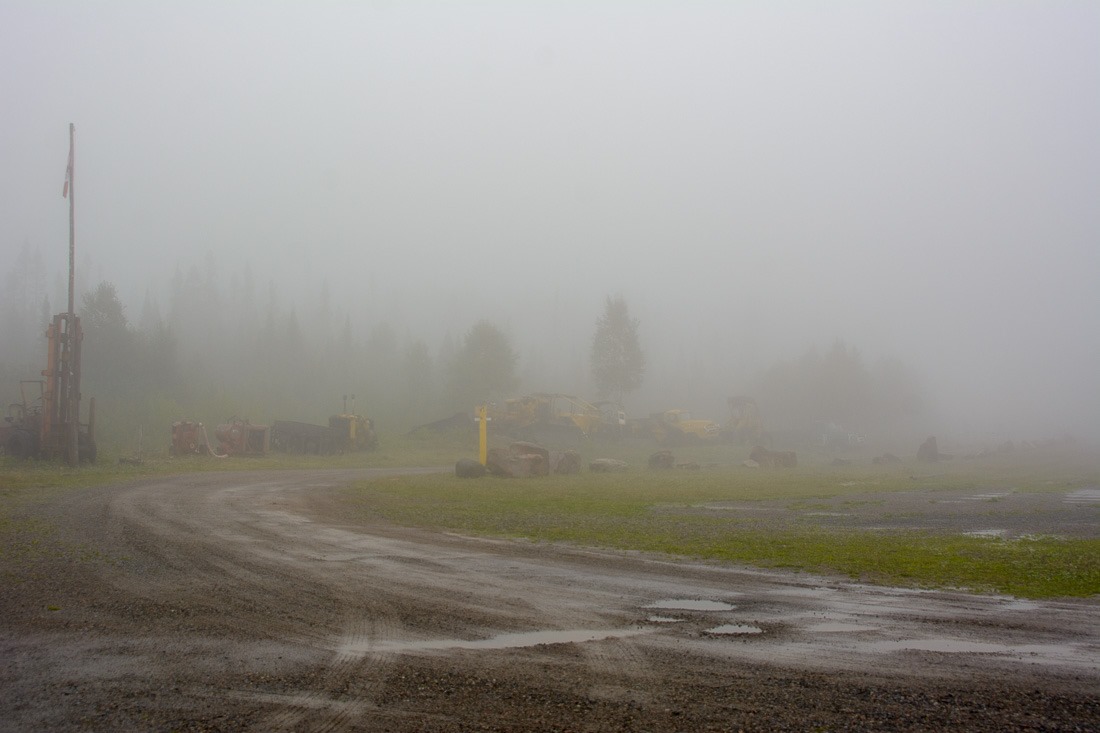 A thick fog clung to everything we saw. We still went into the mine. As it turned out, the mine was of the “open” kind. Small blasts with explosives uncover veins of quartz and amethyst. Both are essentially the same, one is white, the other was white but got heated and irradiated by Mother Nature. The result is a purplish coloured crystal that we call amethyst. The difference between the amethyst we usually see (from Brazil) is that it is harvested in veins here, not from geodes, like they are in Brazil. 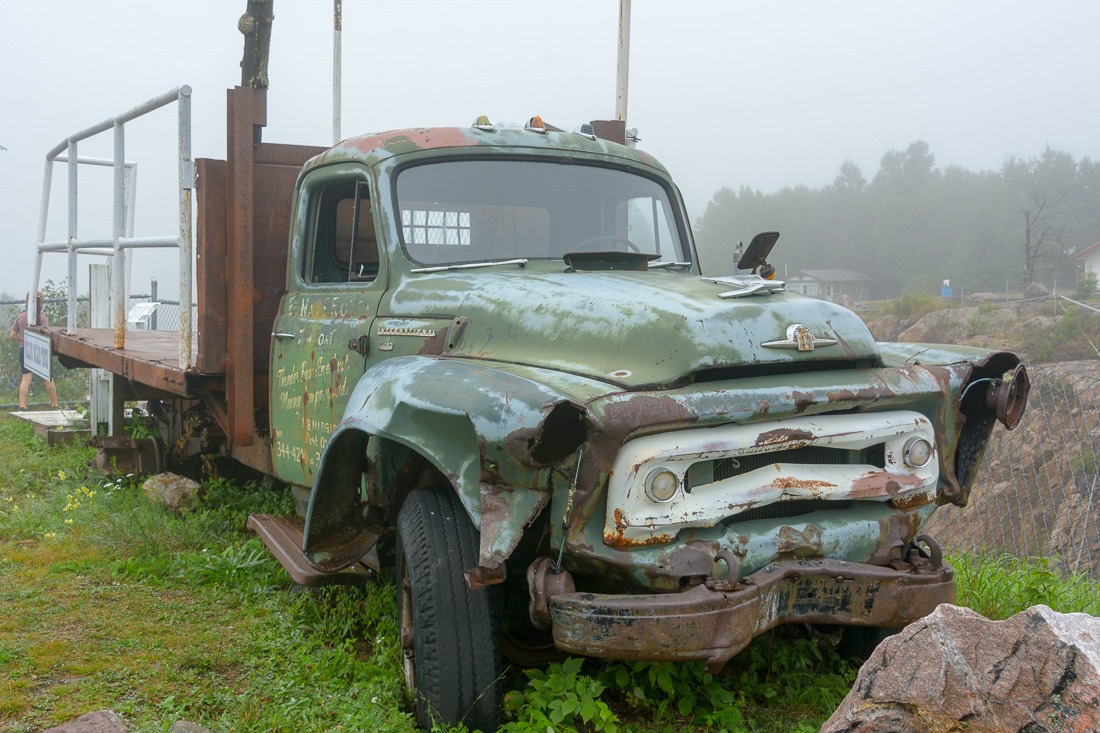 The first owners of the mine thought they had a lot of money here and called their first truck “The one million dollar truck”. It’s there and it’s not for sale, not even for a million dollars according to the guide. 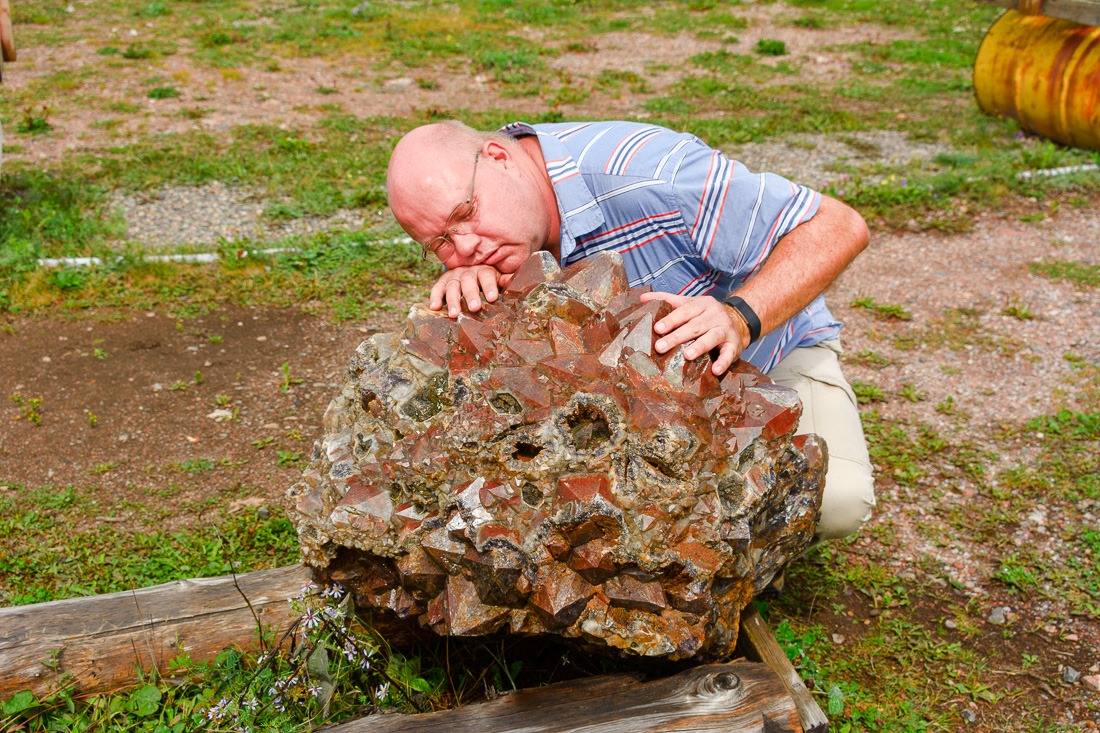 The soothing effect of amethyst

Amethyst is supposed to have a soothing effect on the body and soul for all those who touch it. I wanted to find out. Being of a fairly colossal stature, I needed the biggest piece of amethyst I could find. As soon as I touched the rock, I fell asleep

. My wife took the opportunity to shoot me on the spot… 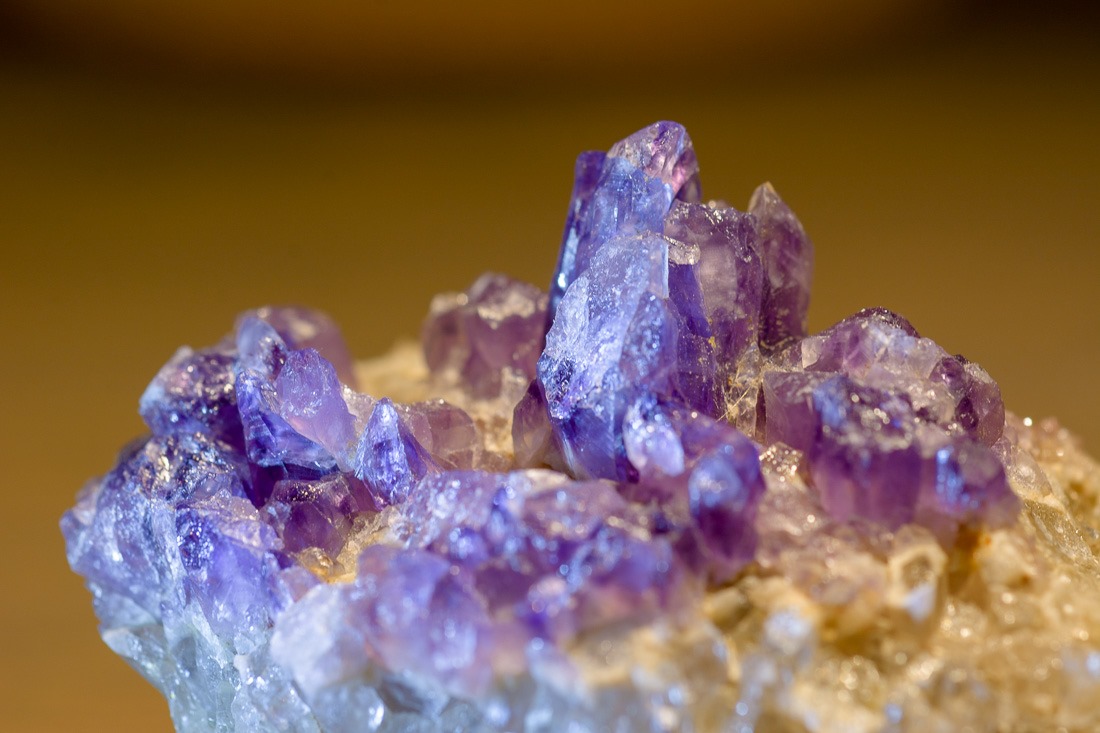 On our way out, the guide told us that we could also search for amethyst ourselves, right here on the premises. For a mere three bucks a pound, I couldn’t resist. I think we came back with a “few” pounds of the stuff. So even if we have gold in the ground here in Manitoba, in Ontario you are allowed to pick up the richesse from the ground

The Thunderbay Amethyst Mine is the largest in North America, if you are ever in the area, check it out, it’s worth the detour.