The beauty of fall

Here in Manitoba, summer and winter go hand in hand. With hardly any space for fall or spring. Winter ends, followed by 10 days of spring and summer is here in full swing. The same can be said for fall. While summer is winding down, or more accurately crashing down, winter is not far away. This year, however, we got a small reprieve to enjoy fall colours and temperatures. 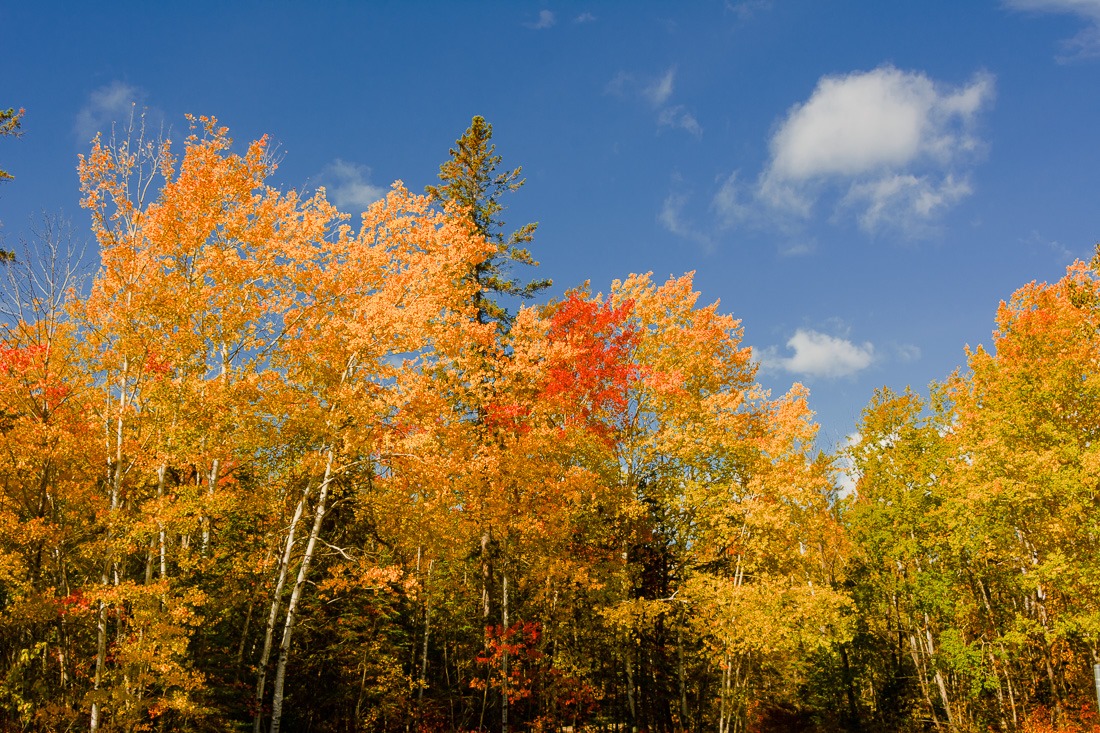 On one of those days, I went out with a friend, to see what we could come up with, photography-wise.

So how does a day out with friends go for photographers? Well, we get up fairly early, not to take pictures but to get breakfast 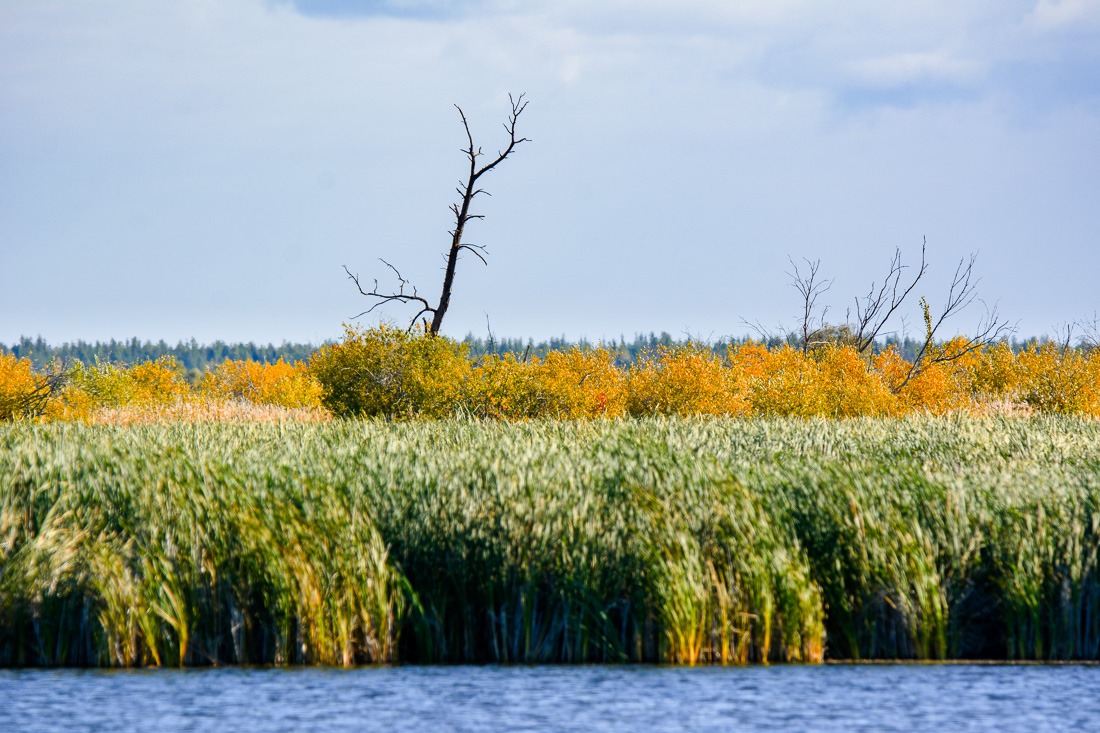 Then we head out to a loosely defined area with a general idea of what we are looking for. Once arrived in the said area, we check for the subjects we are after and if we find them, that’s great. Set up and shoot to heart’s content. Sometimes, we don’t find what we are after and either change the subject or we move away. Most of the the time I do both. In the above area near Hecla Island, there were tons of birds and wildlife when I was there last time. So we thought we might shoot the wildlife there. However, no animal was in sight, so the only thing left to shoot was the reeds and the fall mood that reigned over the area. 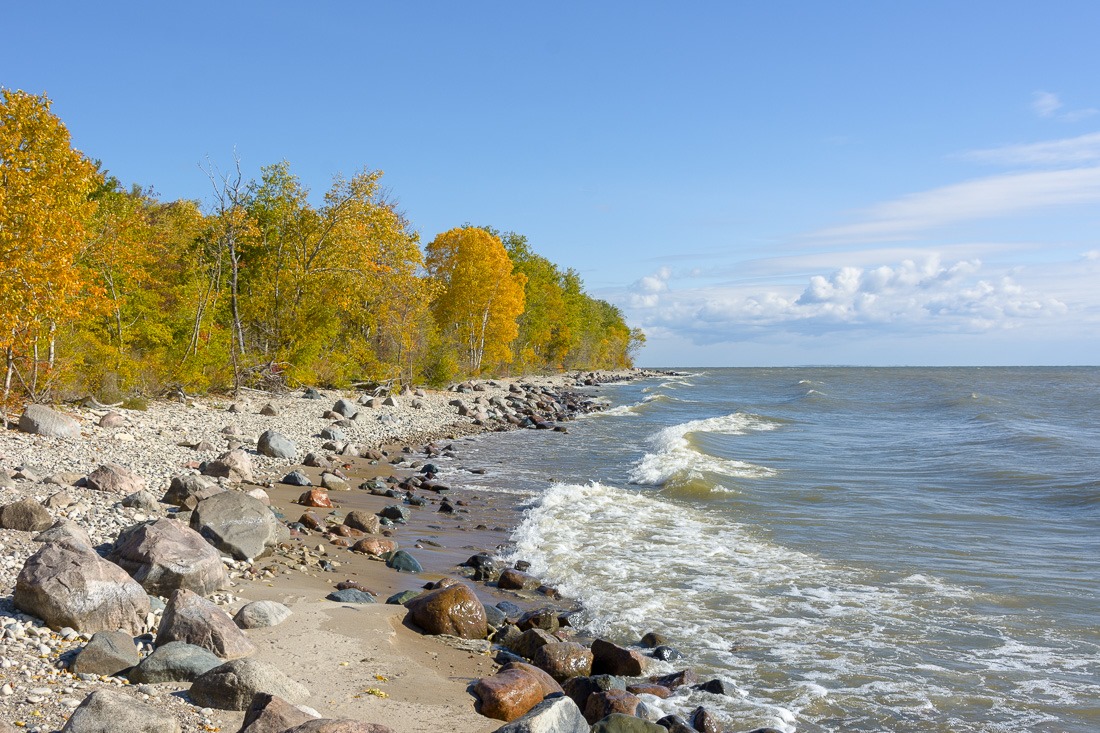 The next stop was Hecla Island itself, where waves came “crashing” onto the shore. Now this is Lake Winnipeg, there’s enough shore around, but waves are in short supply. Big Windy did deliver in the incoming wind, though. I could hardly stay on top of certain rocks. By now the remaining clouds of the night were just flying away. The beach was fairly abandoned, I guess the temperature simply wasn’t there. Not that I would know, I had several layers of clothing on me and was nice and toasty.

For the lead picture of this post I was looking up into the trees. Sometimes that will show you something that anyone else will pass by without even noticing. Granted, it’s not a master shot, but the colours were so vibrant that I couldn’t pass up on shooting them. With the now early morning blue sky, they really popped.

Then it was time for our breakfast. The place we had in mind earlier in the morning turned out to be closed for the season, so we ended up in the Hecla Lakeview Resort. A nice place to get a bite. Once the stomachs had been taken care of, we headed out again. We had in mind to shoot Bald Eagles, but they didn’t seem to be there (yet). 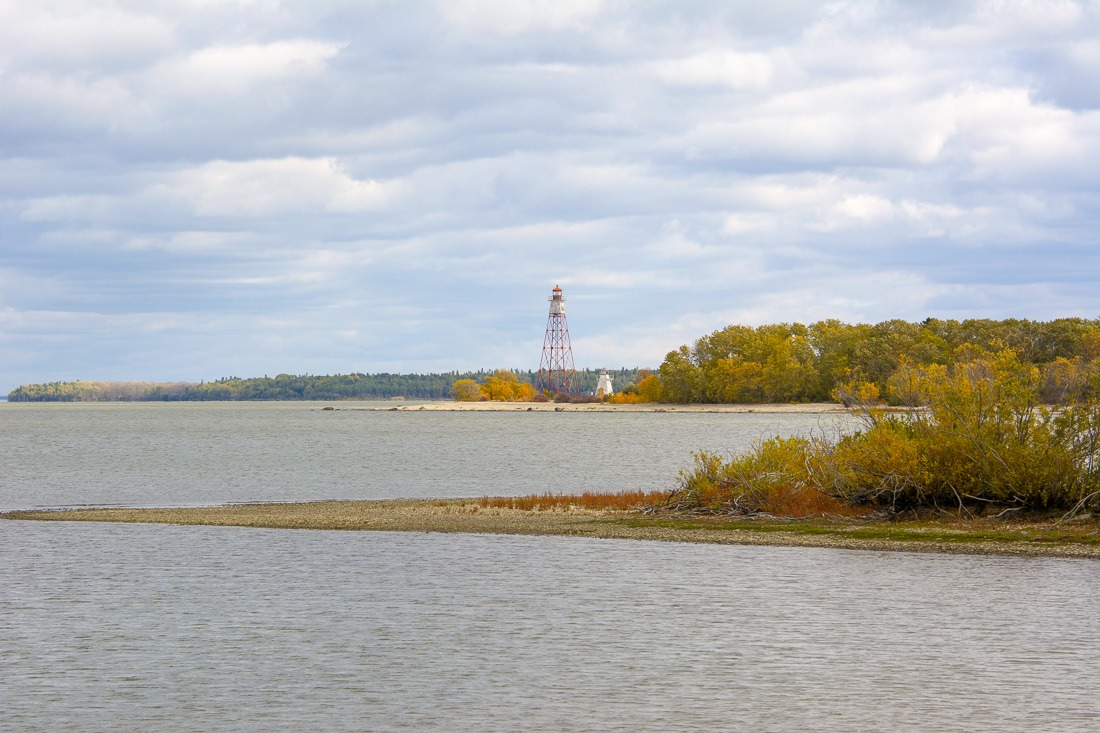 A set of lighthouses 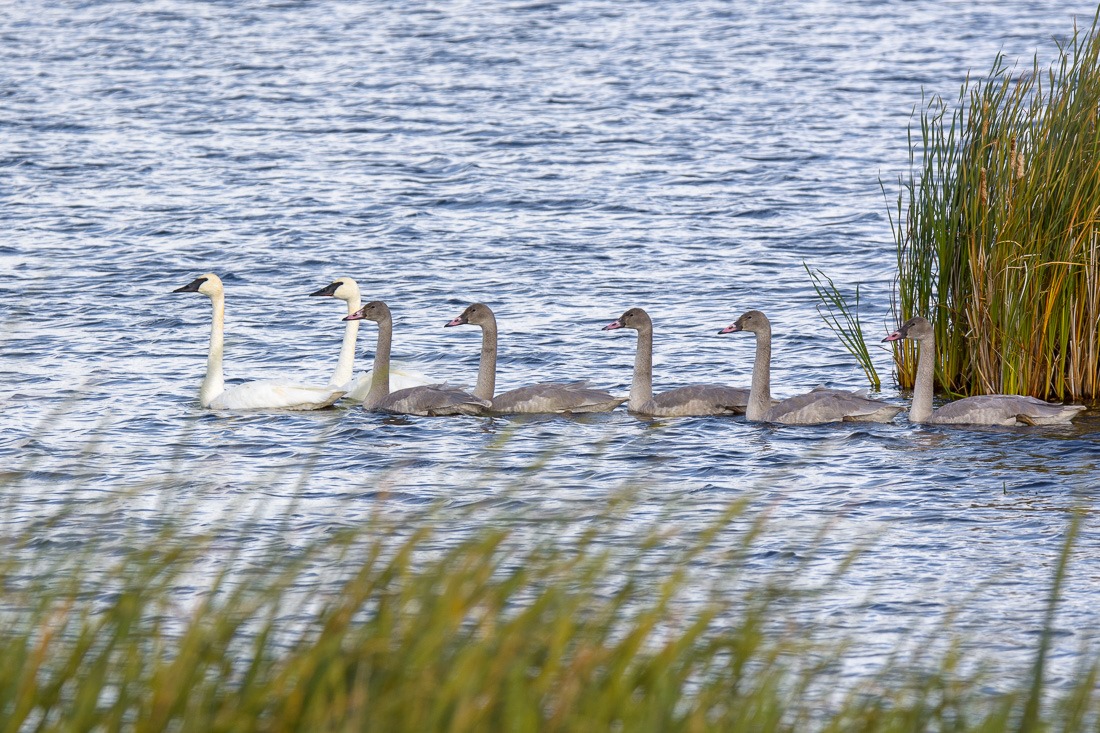 On our way out of Hecla Island, we came across a family of Tundra Swans. Of course they moved out as soon as we set up the cameras and the tripods. I guess their tiny brains always scream “Safety First!” or “Get out!”. The parents and their five youngsters were out of sight in no-time. 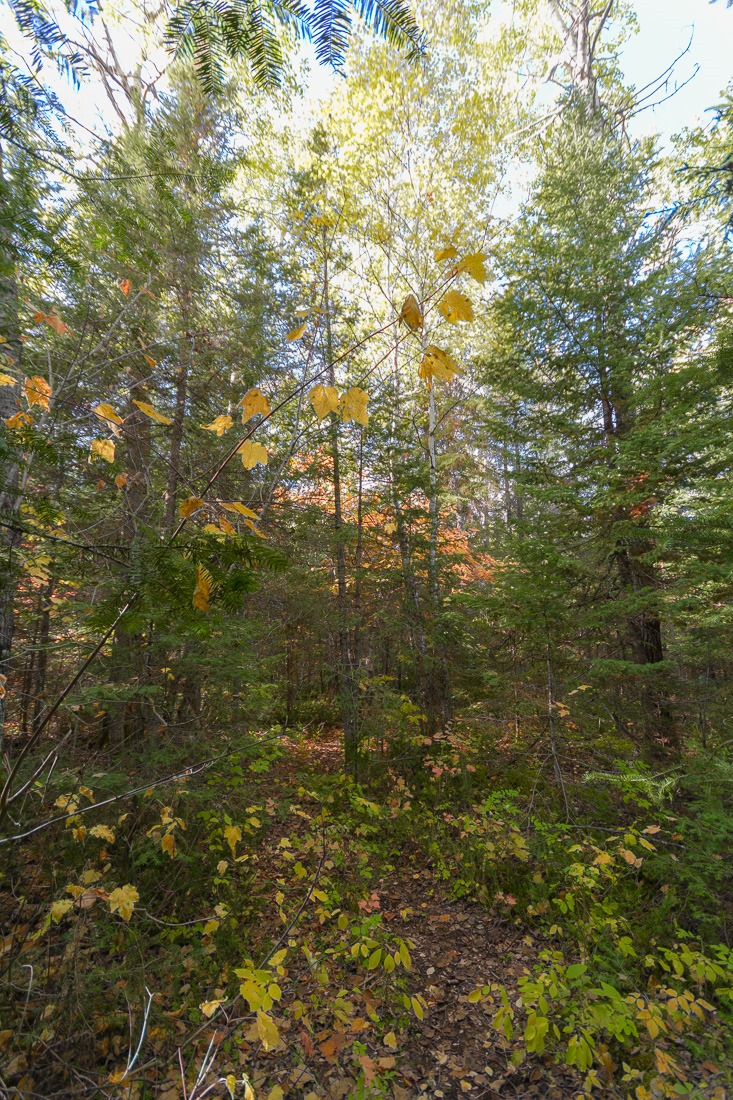 Then it was time to wander around some more. Fall colours were everywhere. The blue sky was a bonus. At that point I noticed that my beloved Sigma 10-20mm didn’t want to focus. In fact, it made no attempt to focus at all. I’ll put the results and the solution in another post one of these days. The solution is simple, but not for the faint of heart. 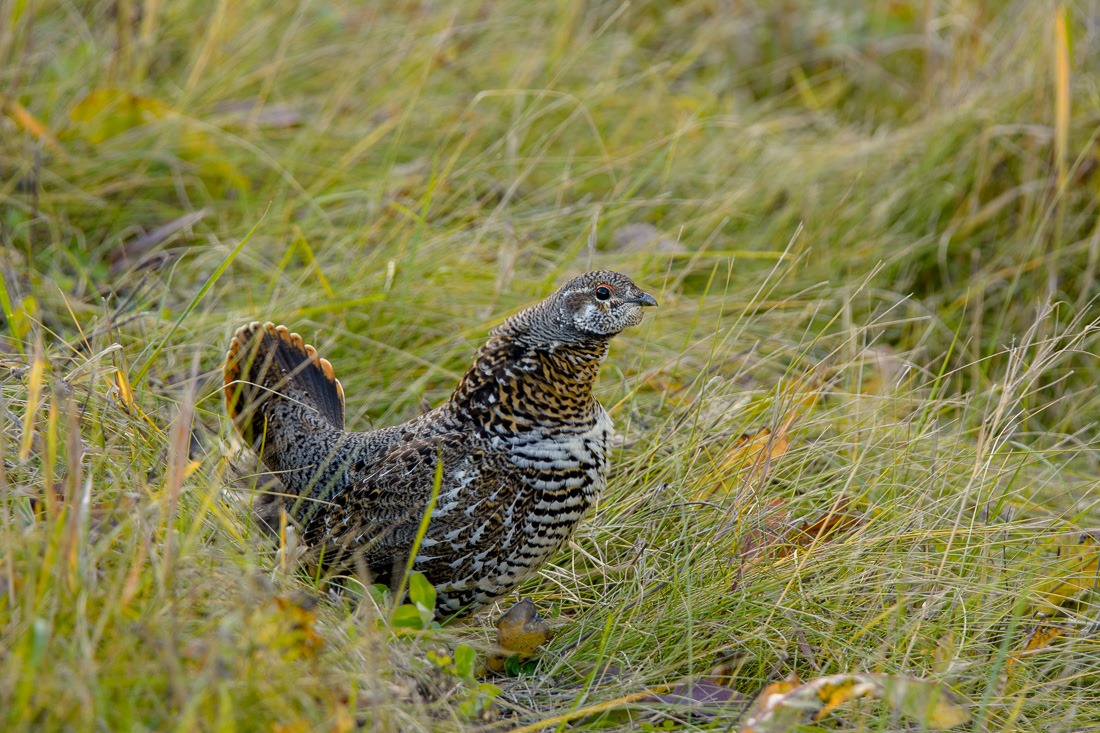 In a ditch, we spotted some Spruce Grouse. This young one and his family were kind enough to let us take their portraits, but their patience did wear out after a few minutes. The woods were considered a better place for them and they disappeared out of sight. 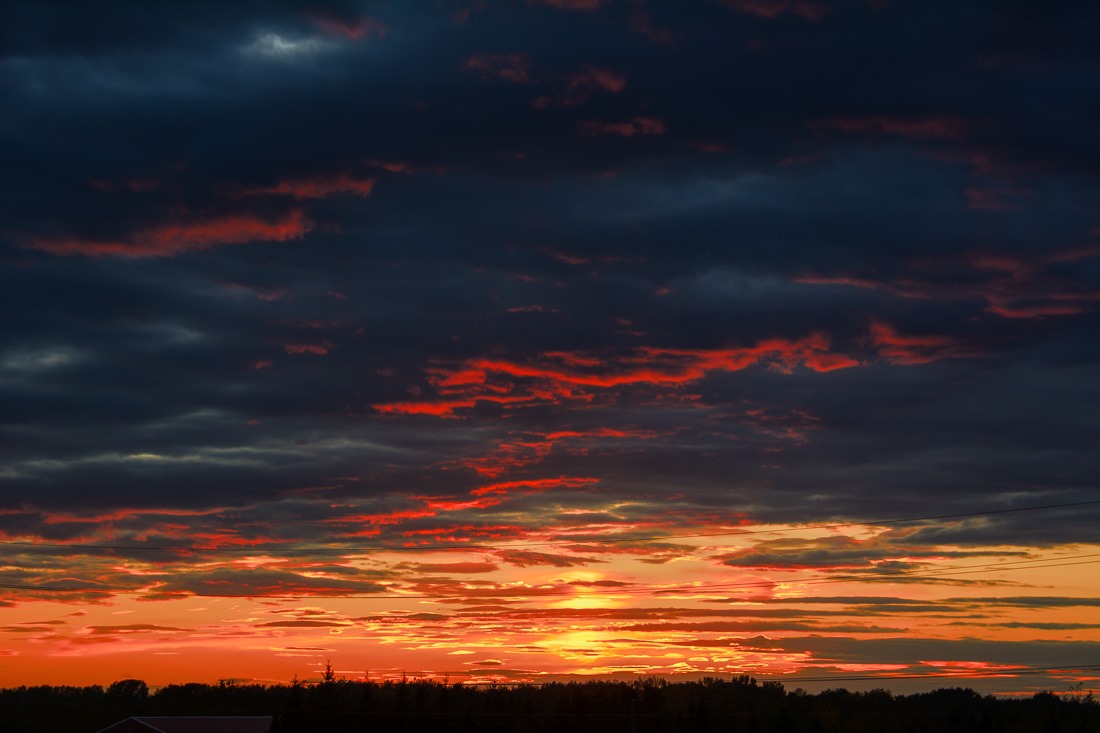 By then it was time to go home, home being several hundreds of kilometres away by now. By the time we got close, the sunset promised to give us a lot of colour. It didn’t disappoint. It was spectacular. I might even make a print out of this shot, I’m not sure yet. 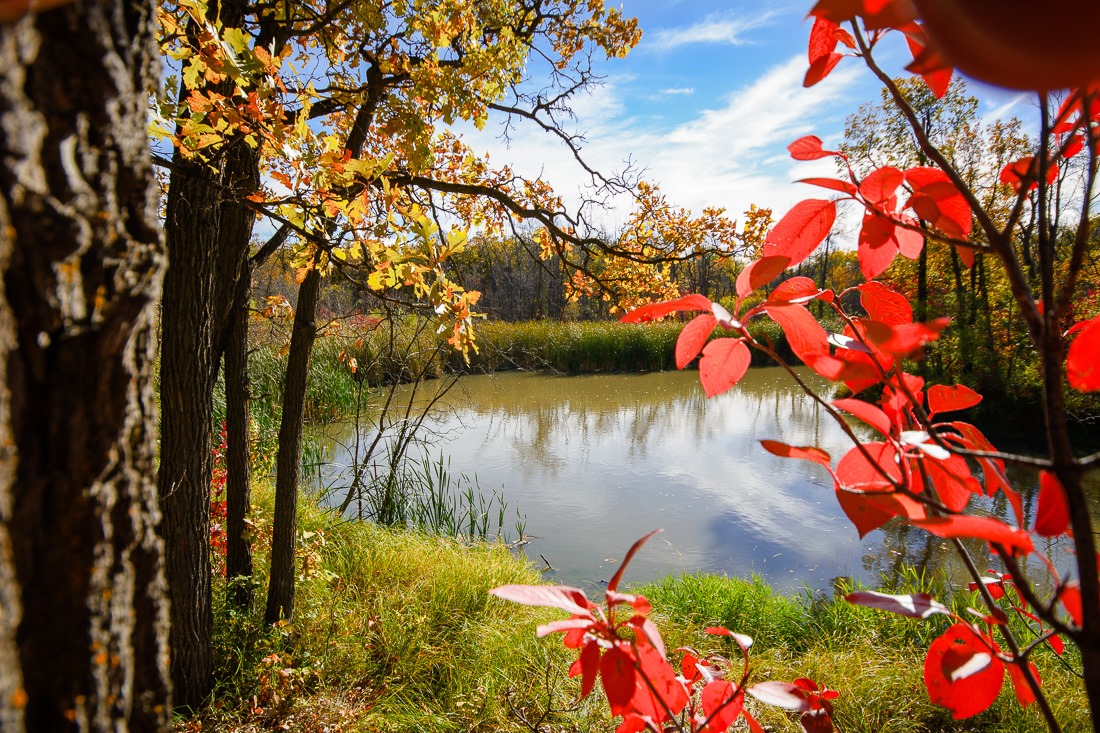 The next day, I was thinking that it was a pity to not check some places inside the city to see if there were no colours of fall to be found there. The Bois des Esprits was abalze with colour as well. All within a stone’s throw of my house. It just goes to say that we don’t have to drive hundreds of kilometres sometimes to get fall beauty and colours. However, a day out with friends on top of those colours is always better.

By now, snow has fallen in the city and the temperatures are low. Not much chance anymore to get more fall colours for this year. Oh, well…