The woods of the spirits

Fall is today in full swing. Rain and hard wind, places that already see snow coming down – summer is gone. Get over it. After a few years living in Winnipeg, the chances are that you have the impression that there is nothing more to shoot, only to wait out the change of the seasons and get a few shots as novelties of the year. You feel the need to go further and further out of the city in order to get some “decent” shots. 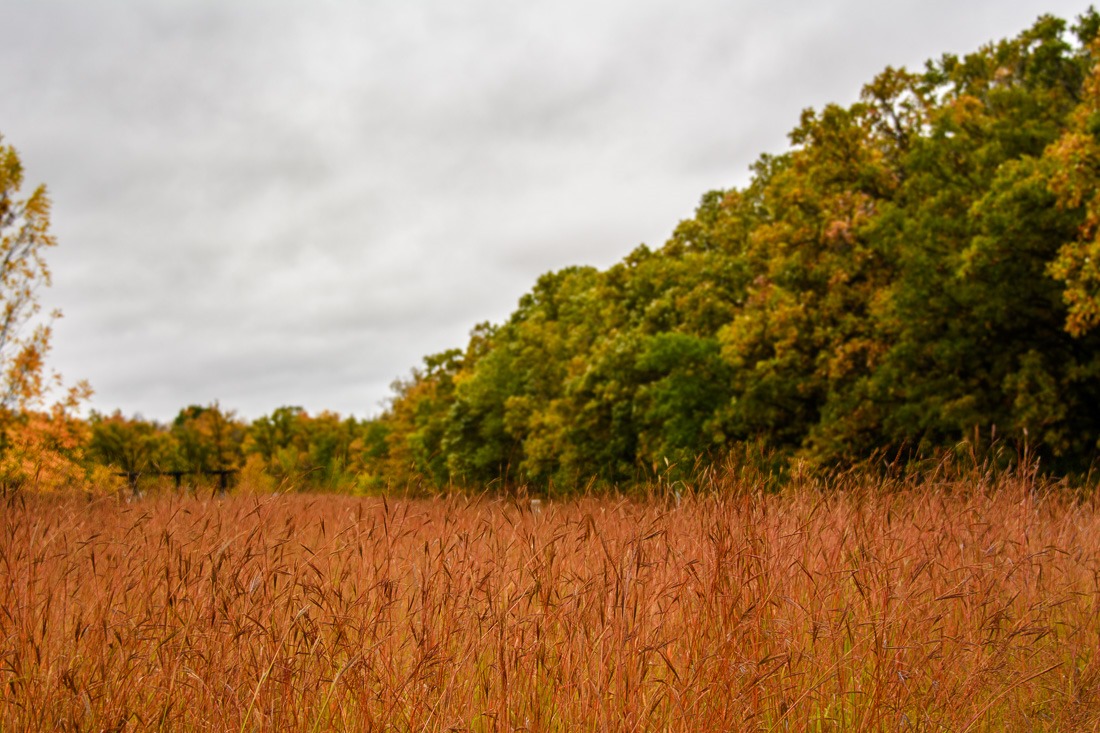 It’s not just Winnipeg, it’s every place where you reside for an extended period of time. No matter how photogenic the place can be. Nothing left to shoot, you feel in a slump. No more original subjects to  shoot, it’s time to hang that camera on the willows and move on. Or is it?

Sometimes, the impression that there’s nothing left to shoot unless you change your choice of subjects is very strong. Until someone comes along and shows you a place where you’ve never been before. Back in the ‘70s in Holland, there was a series on TV from a Dutch journalist who lived in Paris. Every week he came up with a kind of video blog showcasing some aspect of the city. Be that the opening of the first MacDonald’s on the Champs Elysees or the construction of the new Halles. Every week something different and this went on for more than two decades, if my memory serves me right. 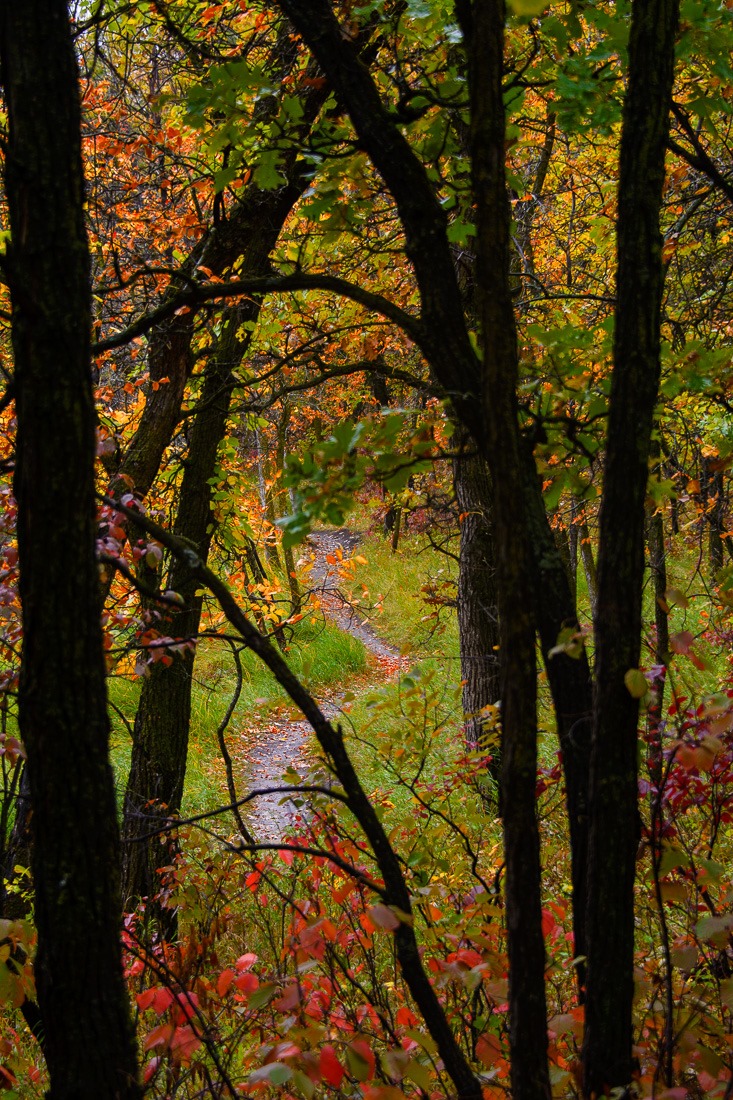 Obviously the number of possible subjects is a little bigger in a city that 12 million people call their home, but you get the drift. Last weekend, the time for me to hang my camera on the willows was close. Nothing to shoot, no weather to speak of, wet and dirty, everything to start a new hobby. 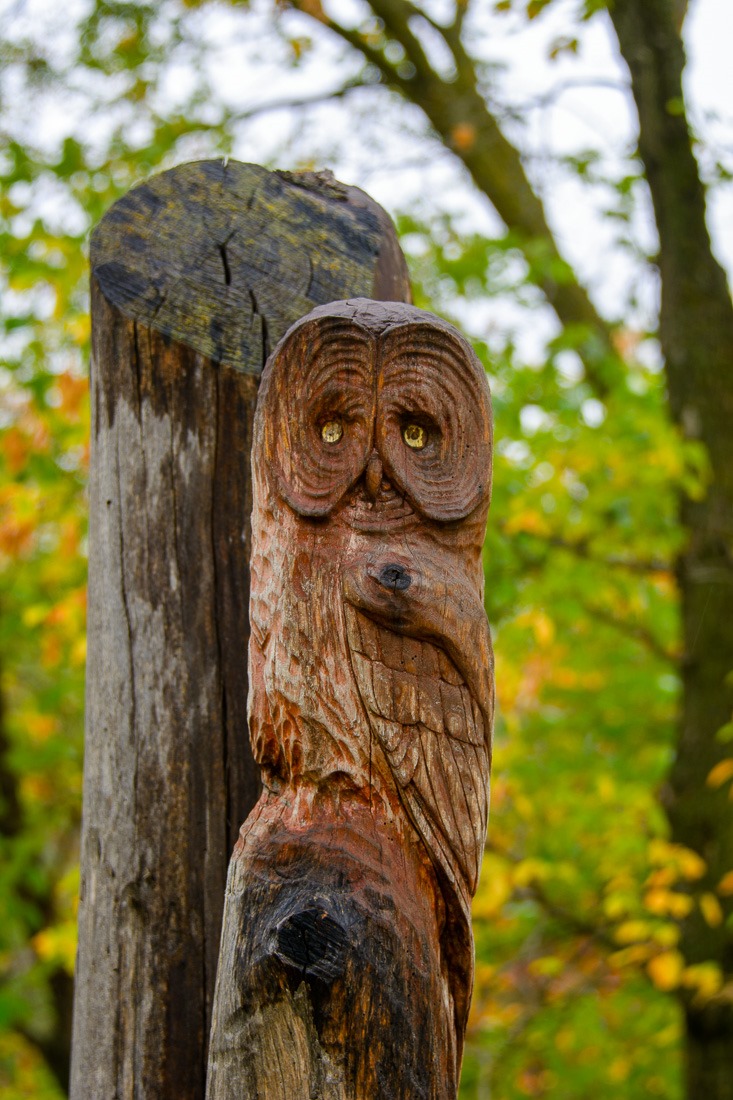 Then a friend of mine posted a picture of a place in Winnipeg that I had heard of, but never had been to. The “Bois des Esprits” or the Woods of the Spirits, just south of Bishop Grandin Boulevard. For some, this place could be called home, but for me… a new place to go to. The rainy day did nothing to give me a wish to go out, but at the same time, a little bit of rain does make colours pop a little more. Or in this case, a lot more. We went out anyway. 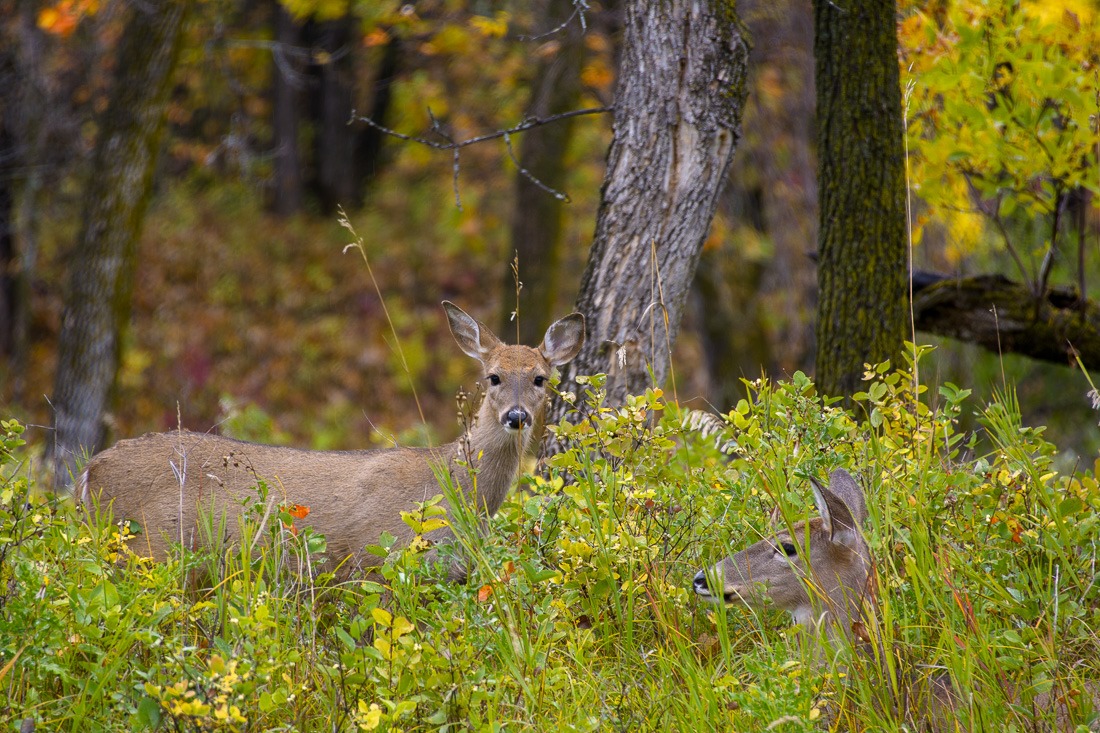 The residents of the woods, White Tailed Deer

The Bois des Esprits is partly old riverbeds, where the meandering river cut through its own loops to create a straighter path for the water, leaving behind the drying meanders of the ancient flow. These so-called Oxbows are a very fertile place for oak and other growth. It becomes a new river bottom and wetland habitat. They are a favourite resting spot for some whitetail deer that call the Bois home. It seems that people are feeding them too, so they will not be moving out anytime soon. 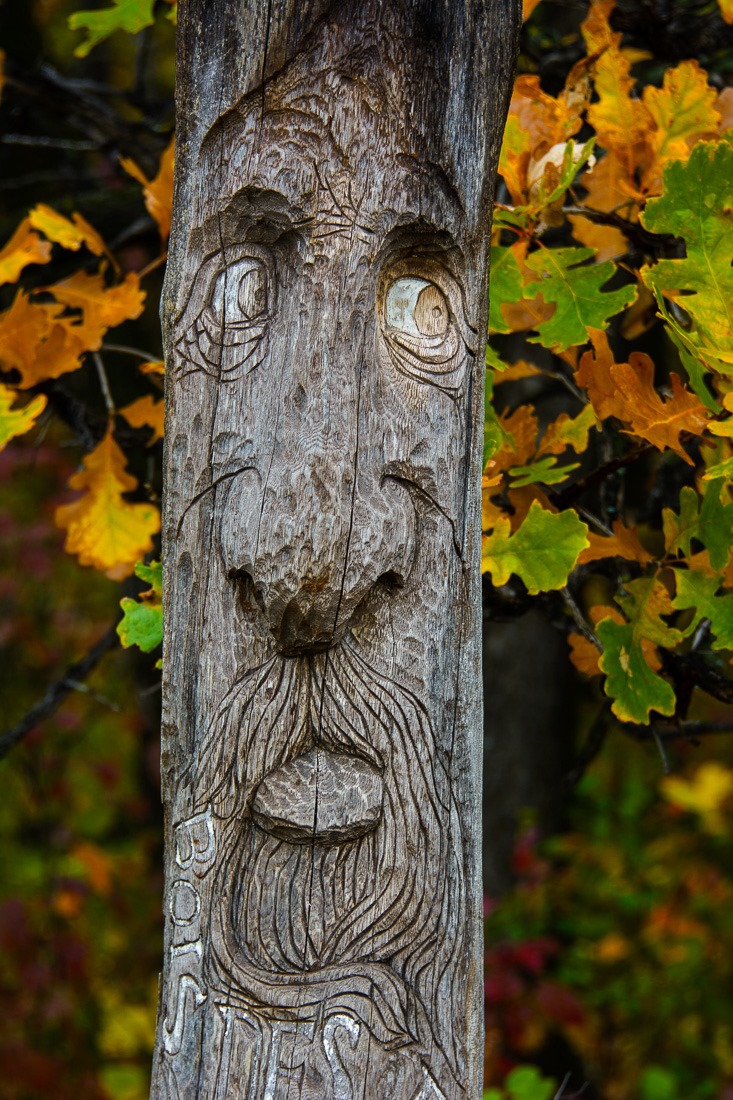 Sculptures of various kinds can also be found along the trails in this gem of a park. There are a bunch of them to find and photograph. I haven’t found them all yet, so I’ll be going back there one of these days. They are so well “camouflaged” that walking the trail in one direction will reveal one set of sculptures, while walking back on the same trail will reveal another set of them. Definitely a way to make people come back for more 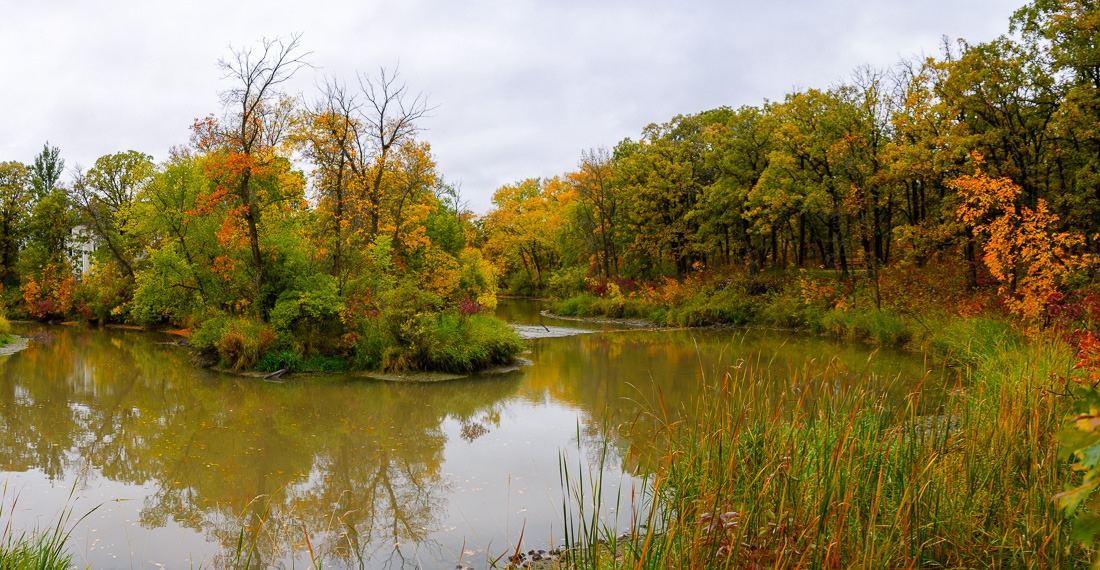 Horseshoe Bend of the north

While we were walking on the lesser trails, the “gumbo” stuck to our feet. At one point, I had to scrape my shoes on a branch in order to leave the mud and leaves behind. I guess that’s the price to pay when you come here when it’s raining. The fall colours were at their best this weekend. At least for my taste. The riot of colours that presented itself just begged to be photographed. Lingering greens interrupted by bright yellows and reds, there is no better for a photographer than that. 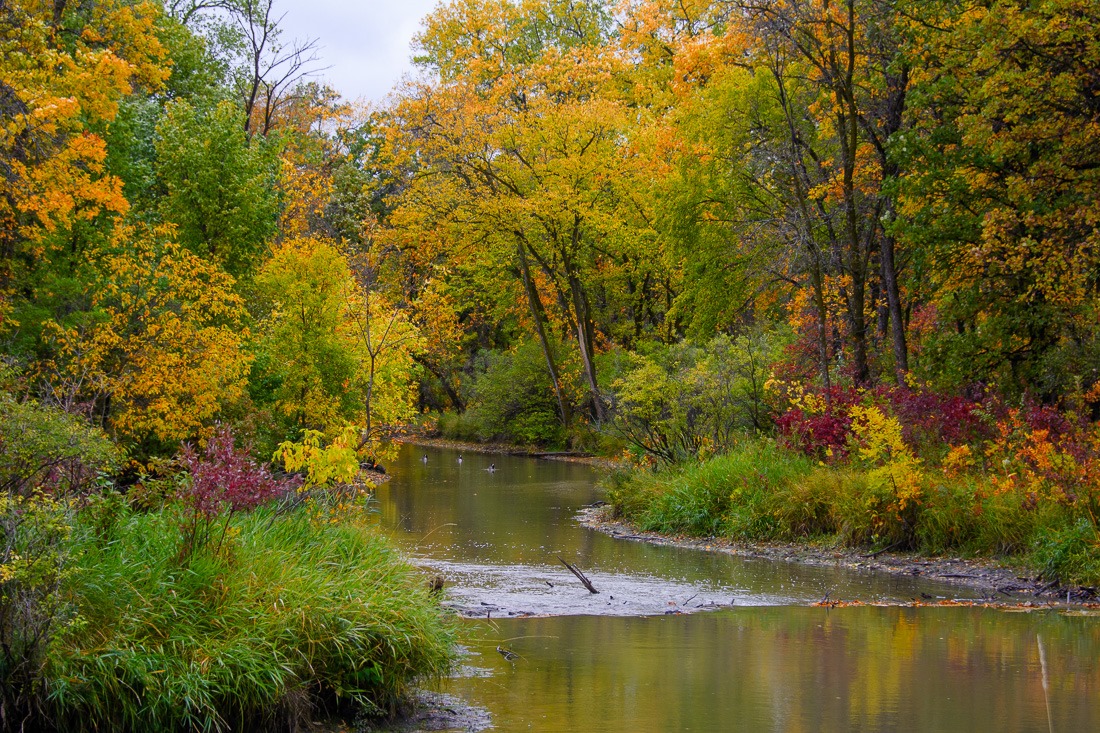 Rapids in the Seine River

Having had some rain before the weekend as well made that the river was flowing nicely too. Rapids in the river made for nice shots. I didn’t try to get them from low on the river banks, my shoes were not waterproof. Neither was my camera gear. 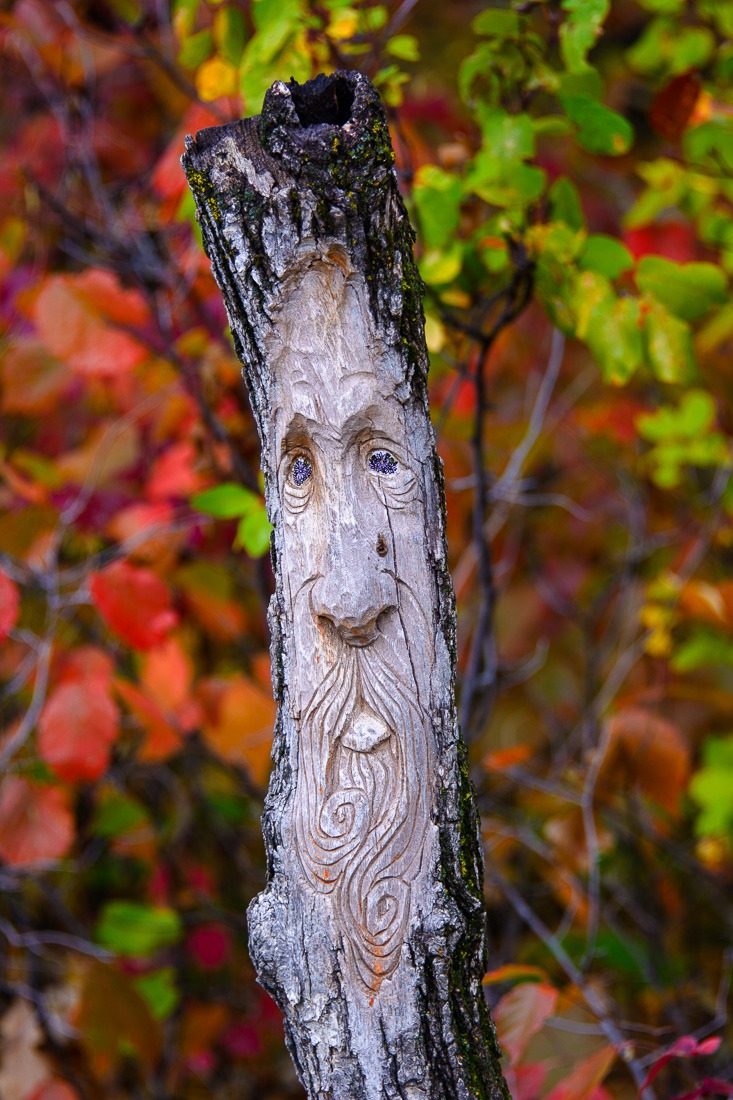 As said, along the trails the sculptures pop up as ghosts but are really called Wood Spirits by their sculptor, Murray Watson. Old tree stumps have been carved into old men, owls and more. Like I said, I haven’t found them all yet, I will have to go back there for more. 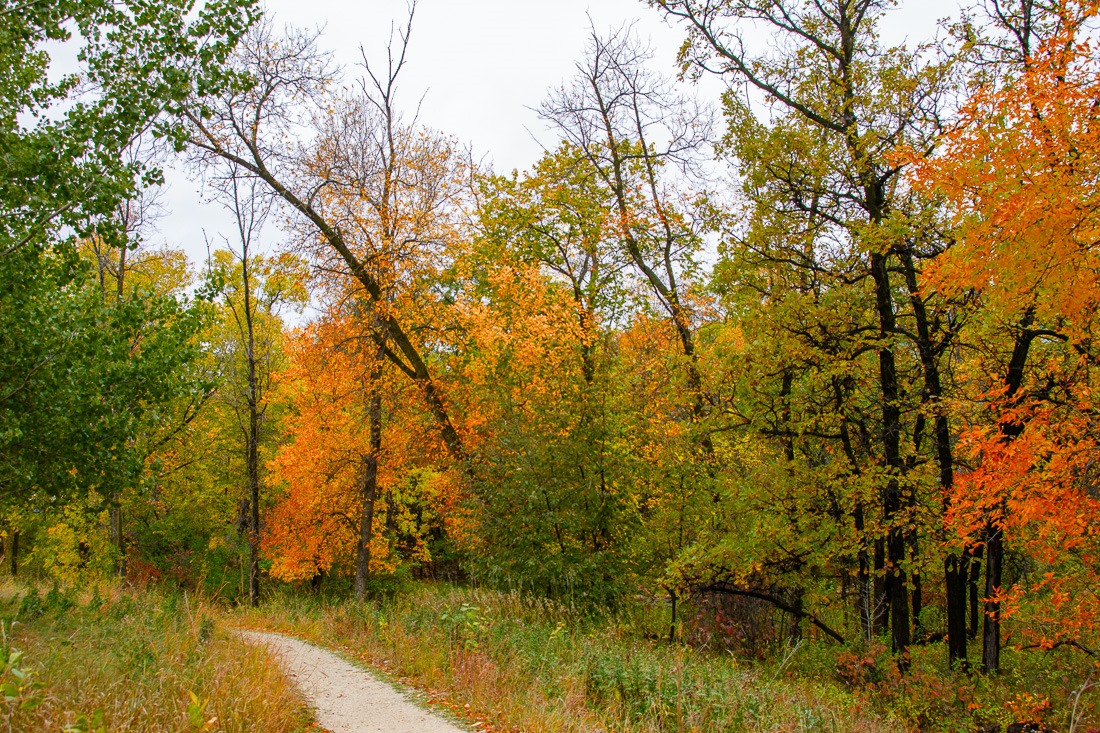 If you want to go there to shoot some fall colours, now is the time. Not all paths will try to stick with you under your boots; most of them are gravel paths. However, the most unexpected results may need some water or mud-proof gear. Judge for yourself if this is a place worth going to.

The place is full of Esprits, they will not keep me away, not even at night. Anyone for a night shoot in this place?